‘Nightcrawler’ is a Mirror and We Can’...

‘Nightcrawler’ is a Mirror and We Can’t Look Away 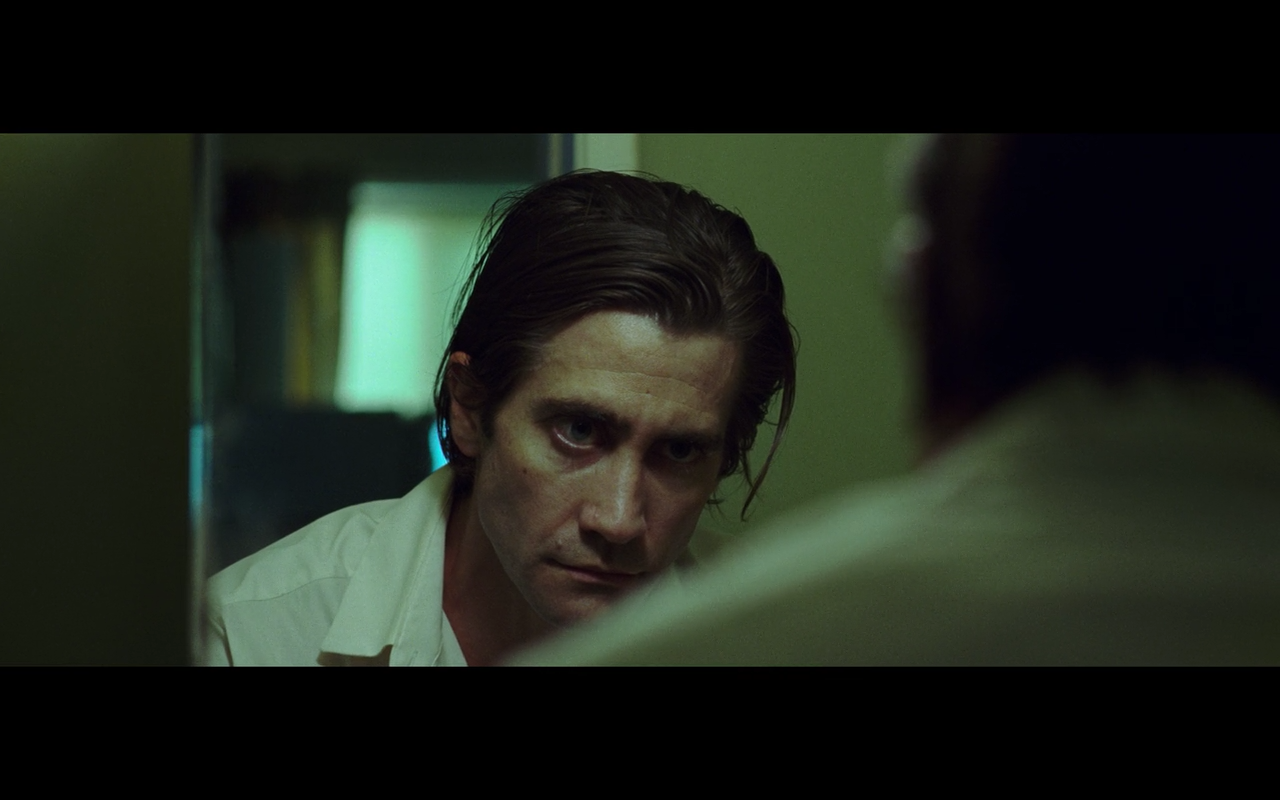 Happy Halloween from The Netflix Club! This month, we’ll be doubling down on our output, focusing exclusively on horror movies with a new essay every week. More spooky fun for your Halloween season.

Contrast is elemental to movies. Halloween is basically a movie about a girl babysitting in the suburbs, it just also happens to feature a character with no face who wants to cut said girl into at least two pieces (it’s never clear). A lot of what makes scary movies so scary is how they use contrast, the degree to which they throw something abnormal and strange and terrifying into our natural world and sensibilities. The intersection of the familiar with the unfamiliar is where we start getting nervous.

With respect to this formula, Nightcrawler isn’t really a traditional scary movie. Virtually everything that happens in it also happens in real life. Nightcrawler is set in Los Angeles. It opens with static views of the streets and corner shops and vacant lots that will appear in our story. This is easily recognizable as America today. This is what happens here. This is how it looks.

What’s scary about Nightcrawler is Lou Bloom. Lou is the distillation of everything dark and horrifying about the world of Nightcrawler, a world that thrives on crime stories and grisly accidents—our world. Within minutes of our meeting Lou, he stops to absorb the scene of a flaming car crashed on the side of the highway. Voyeuristic, yes, but nothing that many of us wouldn’t do. It’s when a seasoned stringer squeals in (the always underrated Bill Paxton) and shoves his camera in the most graphic angles of the ongoing accident that we see what makes Lou different in this scenario from us. As the stringer speeds off to sling his raw footage to the highest-bidding news station, we watch Lou realize that there is an industry behind accidents like this one. He sees the same dark fascination that caused him to pull over and investigate the scene for himself being monetized. And he sees it as a perfect fit. 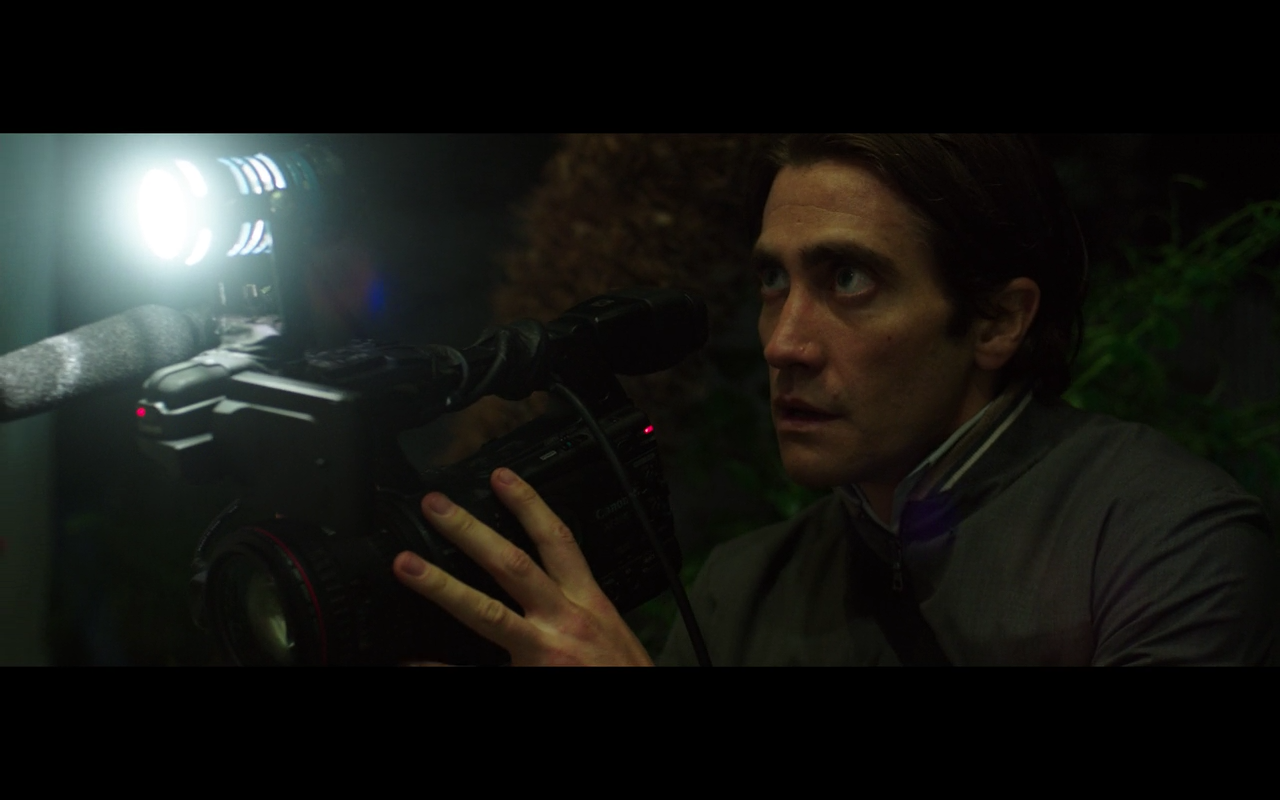 We don’t know much about Lou except that he is eager for work. Maybe desperate. And on the surface, Lou is doing everything right as a man trying to make it in America right now. He sees opportunities and seizes them in order to advance his position and increase his value. He is constantly extolling the teachings he got from an online business course.

What makes us uncomfortable is just how calculating Lou is within the framework of entrepreneurship. He treats relationships like transactions, and we watch it works out swimmingly for him. He is neither likable nor personable—his flash-frozen eyes and ceaseless persistence betray the phoniness of his friendly temperament—yet he encapsulates the ambition that we instill in our youth. The second scene of the film sees Lou offering a definition of himself in hopes of a job: “Who am I? I’m a hard worker, I set high goals, and I’ve been told that I am persistent.” He offers his motto: “If you wanna win the lottery, you have to make the money to buy a ticket.” He grins. He likes that line.

Lou is the engine for the scariness in Nightcrawler, his predictably pragmatic thinking rendering him terrifyingly unpredictable, but moreover, he is the engine for every step of the plot in Nightcrawler. Writer/director Dan Gilroy described the genesis of Nightcrawler as an “antihero success story,” and this is the distinction that elevates it above just some character study of a brooding psychopath. It is plot-centric but character-driven: every sequence results from a new angle of Lou’s mounting ambition, and it is the scope of that ambition that suggests to us that he may in fact be psychopathic. He knows that his footage has emotional shock value, but he is impervious to it. Lou only sees the corpses in his footage as dollar signs. Lou is in the death business, and business is booming. 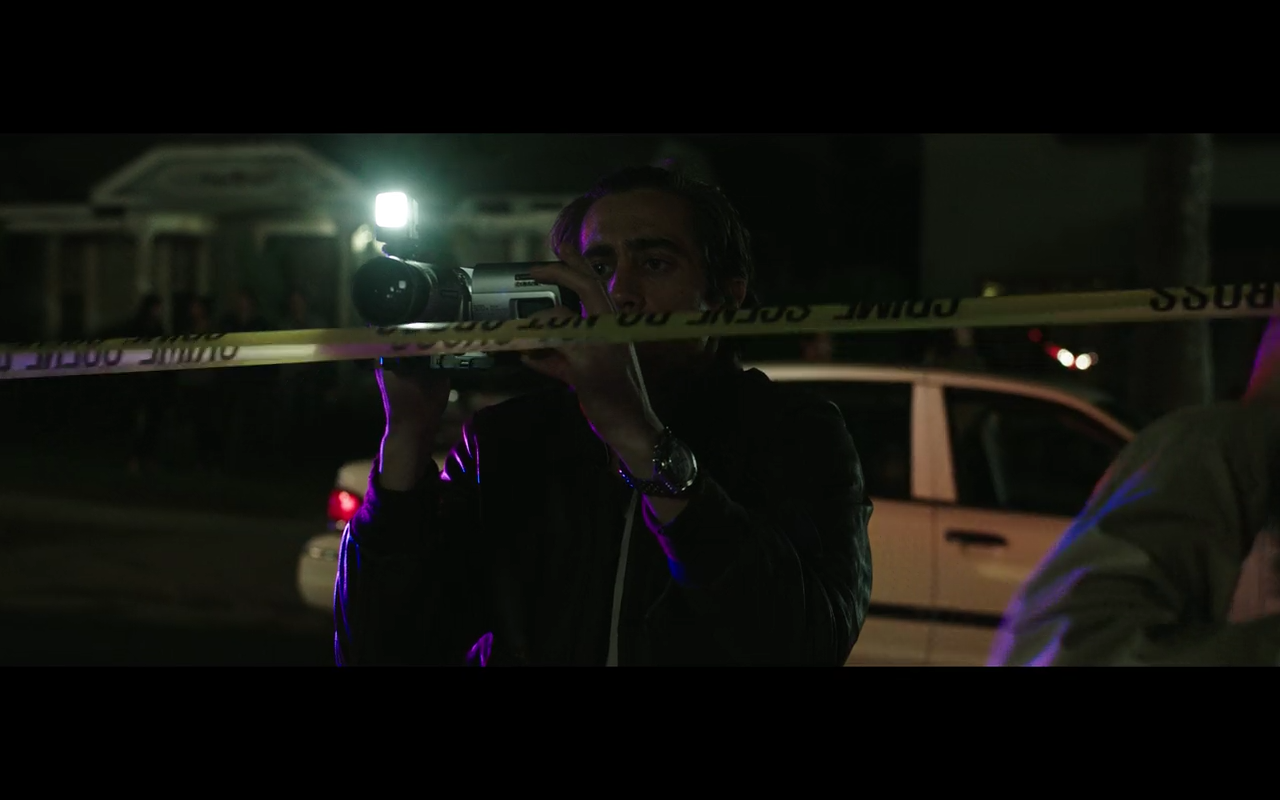 In addition to the character of Lou, the cinematic elements of Nightcrawler are equally powerful in eliciting our fear—our fear of what Lou might do as his efforts are continually rewarded. Nowhere is this contrast wielded more effectively than in Nightcrawler’s score. Gilroy doesn’t give into the temptation to lay on Reznor/Roth stylings; there are no pulsing synths here to soundtrack Lou’s feverish nighttime shoots. Instead, the music of Nightcrawler is almost quirky in its inconsistency with the horrifying events of the story—as he fills his library of segments with titles like “Nursing Home Nightmare,” “Toddler Stabbed,” and “Carjacking/Woman Dragged,” a distorted guitar kicks into gear, throwing out a looping riff that effectively says Look at him go! The music seems to concede that, yes, people are dying, but look at how well our hero is doing! It’s brilliant filmmaking that indicates an absolute commitment to the narrative rather than the cinematic style du jour.

And I could go on about the masterfully crafted aesthetics of Nightcrawler—the searing shadows and washed-out lights of cinematographer Robert Elswit (There Will Be Blood), the near-perfect performance from Jake Gyllenhaal, every scene between Lou and KWLA coordinator Nina Romina—but, per our Halloween theme, I feel an obligation to the specific properties that make this movie scary; in this respect, the scariest part of Nightcrawler is its commentary on capitalism and its role in American journalism in the age of communication. Lou might be a scary guy, but he is rewarded by the system at every turn—and that’s the bottom line. 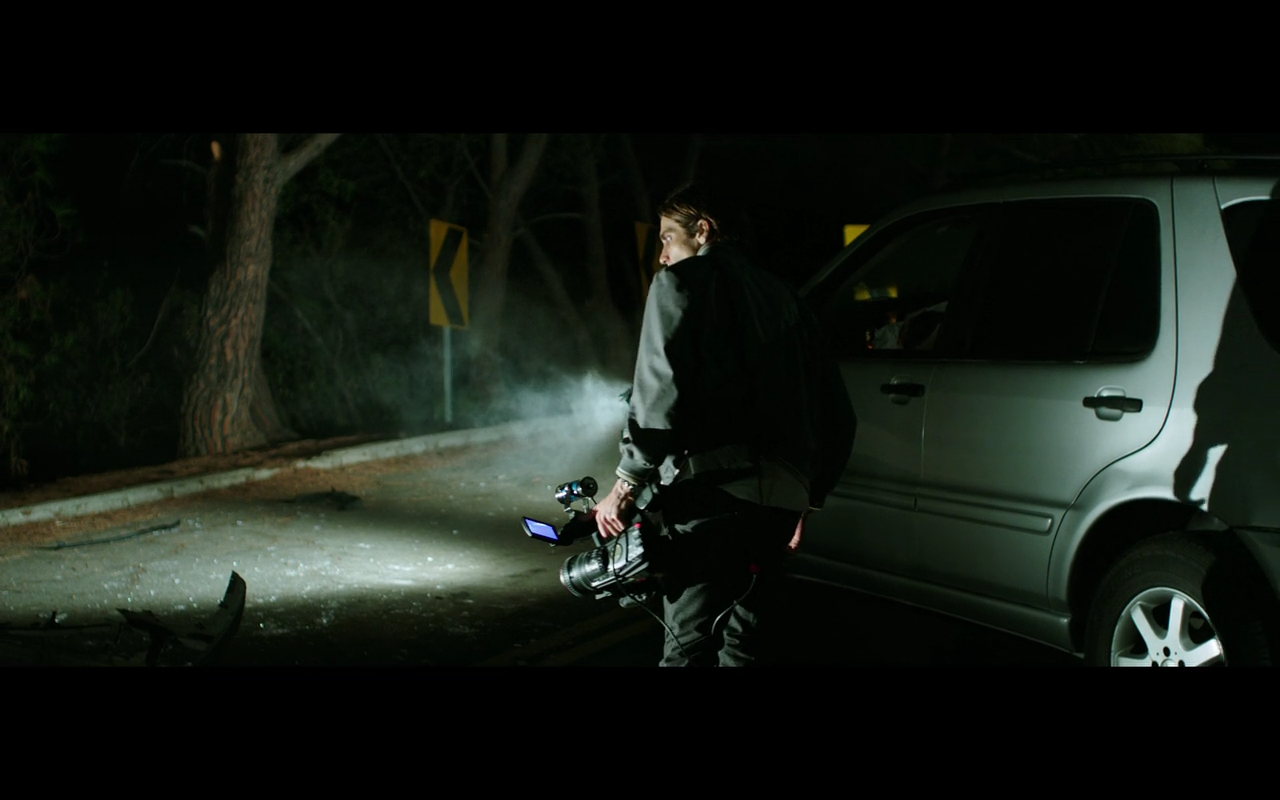 In Nightcrawler, Lou’s work and his centric role in KWLA’s ratings are symbolic of our distinctly American demand for easy, copy-and-paste, crime narratives. We can’t get enough of them. We digest them like Chinese food. Local news is not News so much as a report on the bloodiest local crimes, and the pulpier, the better. In the hierarchy of crime cuisine, the high-functioning Kenneth Lays and Bernie Madoffs are the lobsters and steaks; they thrive in the high-minded world of Journalism, which you have to pay for and keep up with to comprehend in the juicy terms of human casualty. The OJ Simpsons and Jodi Ariases are the McDonalds fries; they’re splattered across People and the seedy magazines that we eye at the grocery checkout. And below even these, way down at the bottom, are the Twinkies and Fun Dips of crime—homicides and hit-and-runs; drunk drivers that kill and home invaders that rape. These events happen daily in cities all over the world, and it makes them ripe for local broadcast. As Nina tells Lou at his very first footage sale, “To capture the spirit of what we air, think of our newscast as a screaming woman running down the street with her throat cut.” Nice.

So while it freaks us out that Lou is so earnest in his belief in the personal responsibility narrative, and while it definitely freaks us out that he takes this enthusiasm, unadulterated with guilt, to shootings, stabbings, fires, crashes, assaults, there is truthfully nothing about Lou that isn’t already part of our DNA as Americans. He is everything that is subliminal and innate in the economy of media, distilled into the form of a man. And you know what, he seems like he might just have a bright future ahead of him. 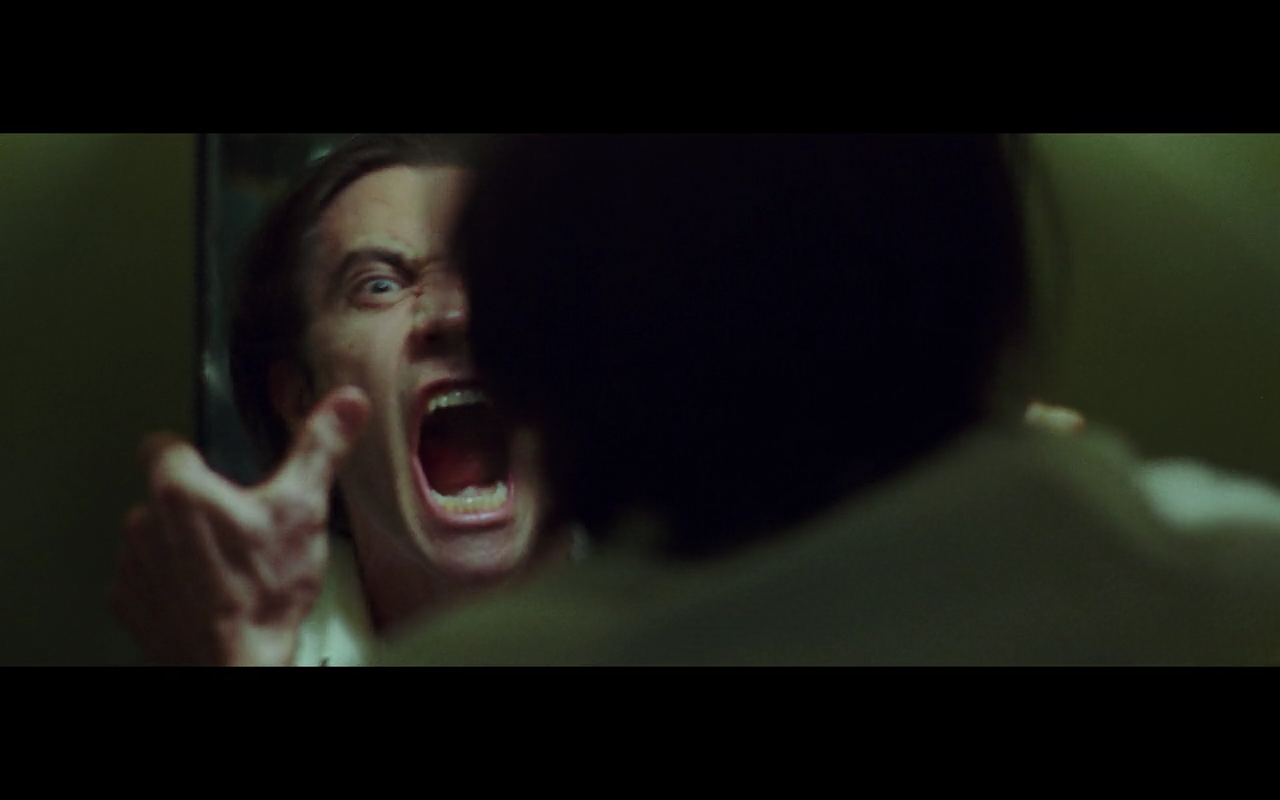