Nihilism Can Be A Blast In 'Bu..

In the Coffee Roasting World, .. 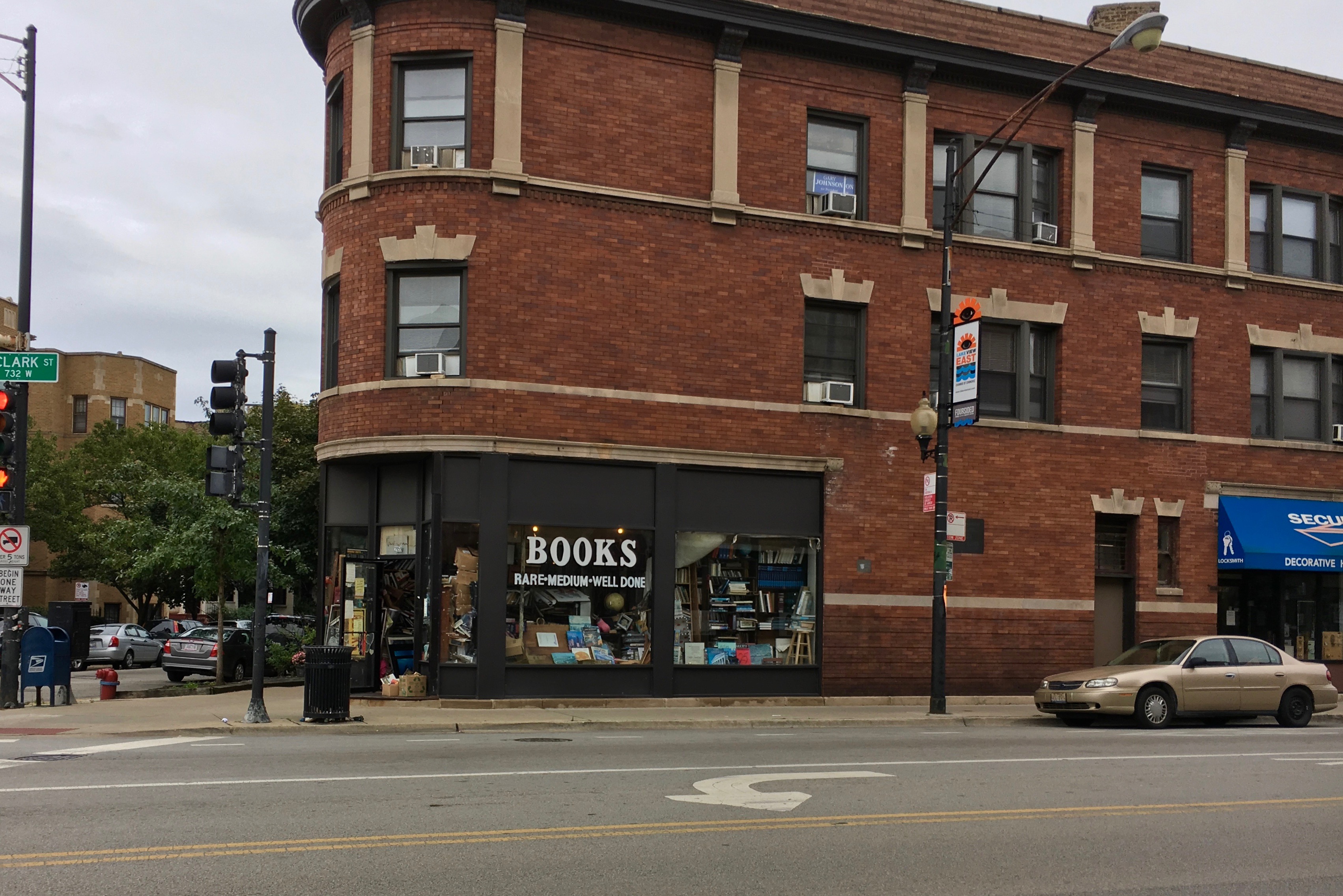 “I felt wise and cynical as all hell,” Sylvia Plath once wrote. It appears that Chicago residents eat that up. John Chandler, owner of used bookstore Bookman’s Corner in Lakeview, can’t keep enough Plath on his bookshelves.

“I never can keep ‘The Bell Jar’ in stock,” Chandler said. “Normally I sell used paperbacks for $3, but I’ll sell Plath for $6. Whenever she’s available at my distributers, I’m buying it.”

Chandler can personally relate to Plath’s quote. He’s been in the bookstore business since 1975 and seems to have a healthy dose of cynicism coupled with his sharp intellect. His ability to locate a single book in his rather unorthodox method of utilizing floor space for stock is startlingly accurate and impressive. When prompted for the location of a particular political science text, Chandler sprung from his desk chair, avoiding the onslaught of books surrounding him with habitual practice, and plucked the book from an area of the store known as the pit.

“I started in 1975 in Detroit at a flea market and then opened up a story in 1979 back in Chicago. I’ve never made as much money as I did in that flea market, but I always knew I wanted to land in Chicago,” Chandler said.

Chandler’s first store was beneath the Southport Brown Line, but his constantly growing inventory made it a challenge to keep up with smaller space, though Chandler eventually gave up trying to maintain it. 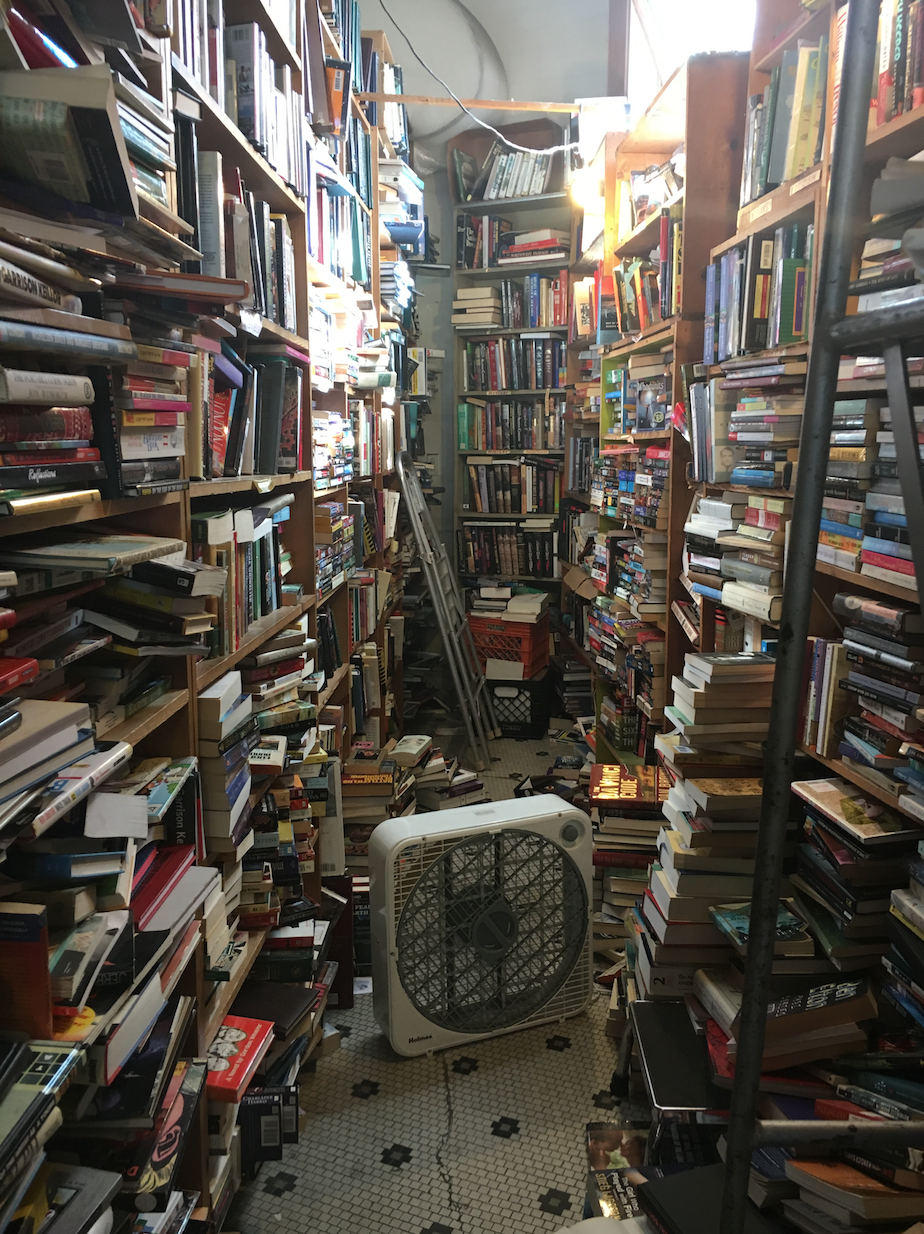 The inside of Bookman’s Corner in Lakeview (Anna Kreutz, 14 East Magazine)

“Everything was great until the Internet. Then it all went downhill,” Chandler said. “I’m not making a cent of money now, but I’m still buying books. It’s a small bleed now to stay open, and if I close it will be like a hemorrhage.”

Chandler’s anger toward the Internet has mostly subsided. His main nemeses now are his health and keeping up with the store, especially since he no longer has employees. His last one fell down in the shop and broke his neck, landing him in a nursing home until his death this past January.

“And now I have the fire marshal on me,” Chandler said. “It started last August, over a year ago now. Someone dumped 500 books right outside, took me forever to go through them all. I finally figured out it was an old customer, lives right at the end of Wellington. He was 92 and moving into a nursing home so there’s all the books back.”

Chandler ended up putting 20 boxes worth of free books on the street.

“A woman came in so angry and she wouldn’t call them books, just kept referring to them as eyesores, a dump. She said she was going to call the alderman, and I said go ahead. I probably could have avoided the whole thing if I was a little more polite,” Chandler said. “The alderman was pretty cool about it…though at that point, the bins were mostly empty.”

Since the fire marshal has now gotten involved with the staggering inventory overwhelming the store, Chandler aims to get books off the floor, a feat he’s been rallying for since 2011, despite being in and out of the hospital (in which case the store is closed) with knee ailments. In between clocking inventory, he’ll gleefully show you his latest surgery scar for a nickel.

“I’m usually here till at least 1:30 am, but sometimes the lights are off, in which case, I may be napping,” Chandler said. “Just in my desk area, I’ve filled up over 1,000 bags [of books]. I’m trying to do the pit at nights, but my physical therapist told me I’m not supposed to move as much. I’m getting old. I’d leave in a New York second if I could…I had so many good years, but now I’m just losing money, not even breaking even.”

Bookman’s Corner is also showing signs of aging. The decaying floor hasn’t gone unnoticed by Chandler’s landlord, whom he classifies as “a bit peeved.”

“They’ll have to redo the floor. You can see where you’re standing that it’s cracked,” Chandler said. “They’ll have to put a lot of work into this place after I’m gone, unless they get another nutter like me for a tenant.”

Still, Chandler has no immediate plans to abandon his store, inventory or loyal customers. Bookman’s Corner remains open for business from one pm to seven pm most days, living up to its window display promising books rare, medium and well done.