To Smoke or Not to Smoke

The Uptown Theatre: Past and Present

Sixth Time Was the Charm

The Uptown Theatre: Past and Present 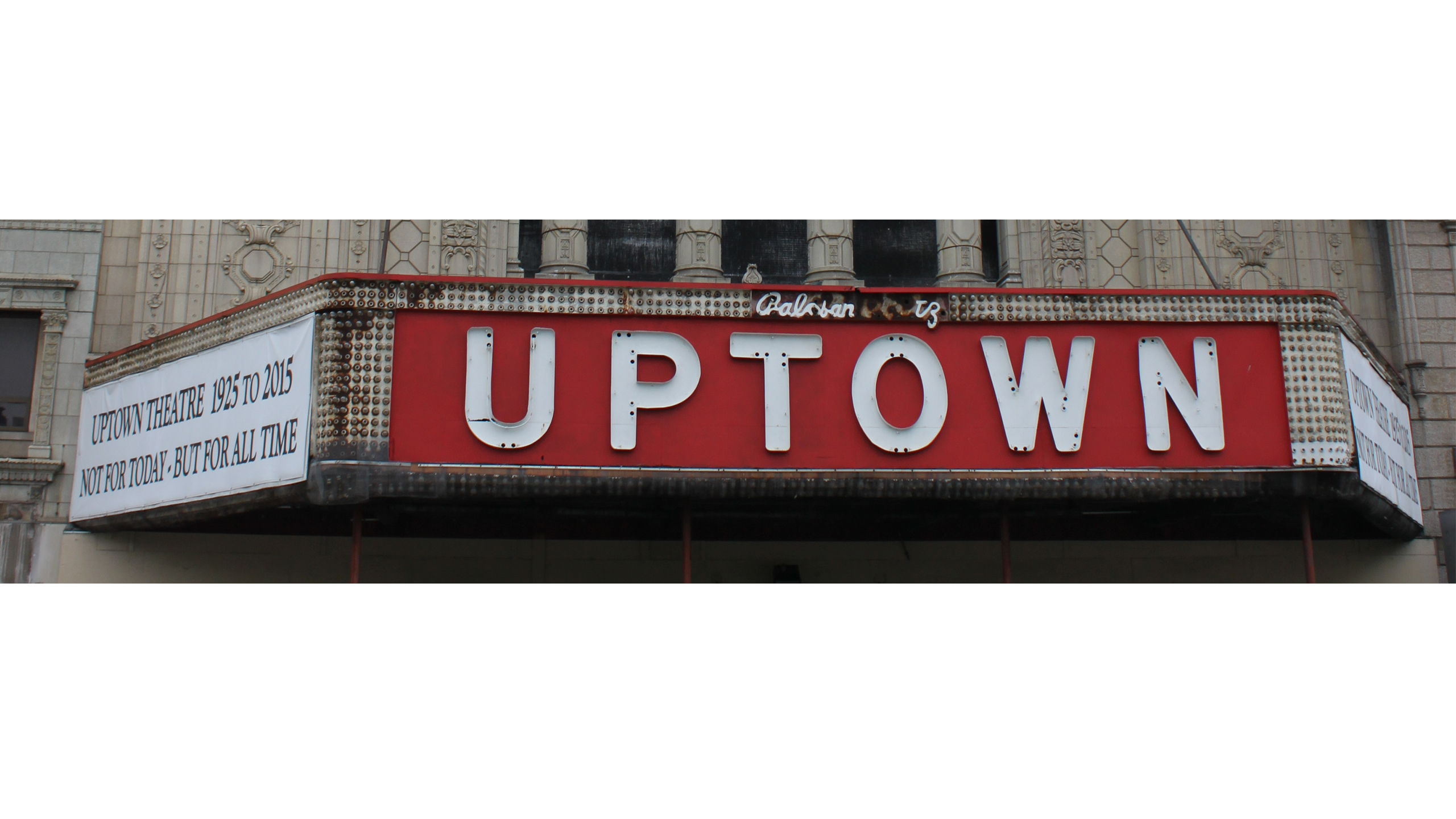 Locked doors, flaked wall painting, construction ladders at the entrance. This is how the Uptown Theatre, once the largest movie palace in the U.S., looks right now. In the ‘20s, 11,000 people would wait at the door just to be the first to get tickets for premiere showings.

The Uptown Theatre, located at the northwest corner of Broadway and Lawrence Avenue on Chicago’s Far North Side, seems absolutely abandoned. If you look closer, you can see workers coming in and out of the building. While local activists and neighbors expect a major renovation for a grand reopening of the venue, this is in fact  just to keep it from collapsing.

People pass by the Uptown Theatre without even looking up at the landmark’s placard. For over three decades, only the theater’s name has been displayed on the vibrant red awning. There were times when legendary artists such as Bruce Springsteen, ELO, Dire Straits, Genesis, Santana and many others had their names featured on the classic marquee.

Since 2008 the venue has been owned by JAM Productions, an independent producer of live entertainment in the U.S. In the 21st century the theater has been used only as a film set – no concerts, no movies, no stage shows. Once an entertainment center of the Uptown area, the theater stands almost abandoned, awaiting its destiny.

When the new owners signed a $3.2 million deal, they expected a major infusion of public money and intended to rehab the Uptown Theatre in partnership with the city and the state. According to Ald. James Cappleman, 46th, the city has already invested around $5 million. “I asked the mayor and the Department of Planning and Development to do an assessment,” says Cappleman, “to see if rehabbing it would have the return on investments.”

An advocate and Alderman offer perspectives for the Uptown Theatre

Meanwhile, part of the public has already made its contribution, though not a financial one. Friends of the Uptown, “a diverse advocacy group of volunteers, neighbors, longtime patrons, historians, architecture buffs, entertainment seekers, theater organ enthusiasts and fans of American cinema,” as they call themselves, have been looking after the venue since the late ‘70s, though the group was only officially formed in 1998.

The organization is trying to call attention to the disastrous state of the venue, to the need for immediate renovation and restoration. It has tried to reach out to people by different means: an online petition, selling a DVD documentary about the theater and distributing a book about Balaban & Katz Corporation, which built and owned the building from 1925 till its sale to Plitt Theatres 1974. 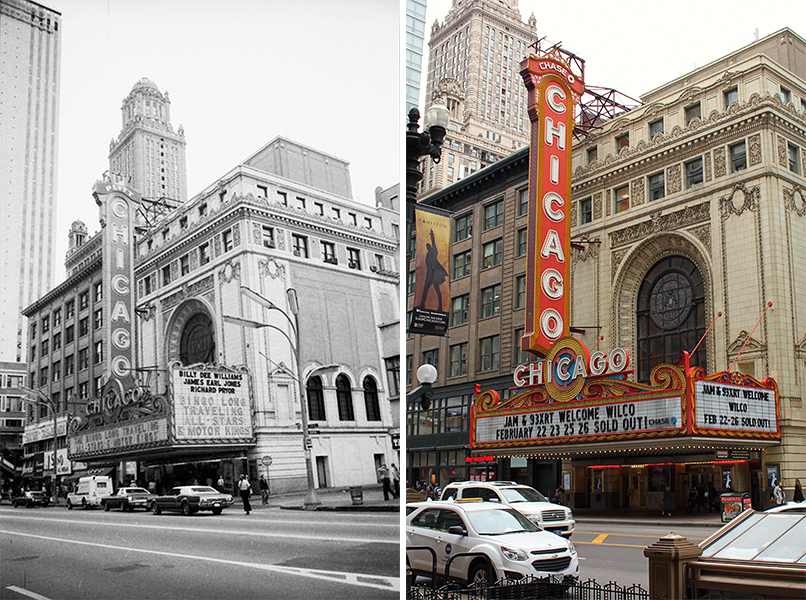 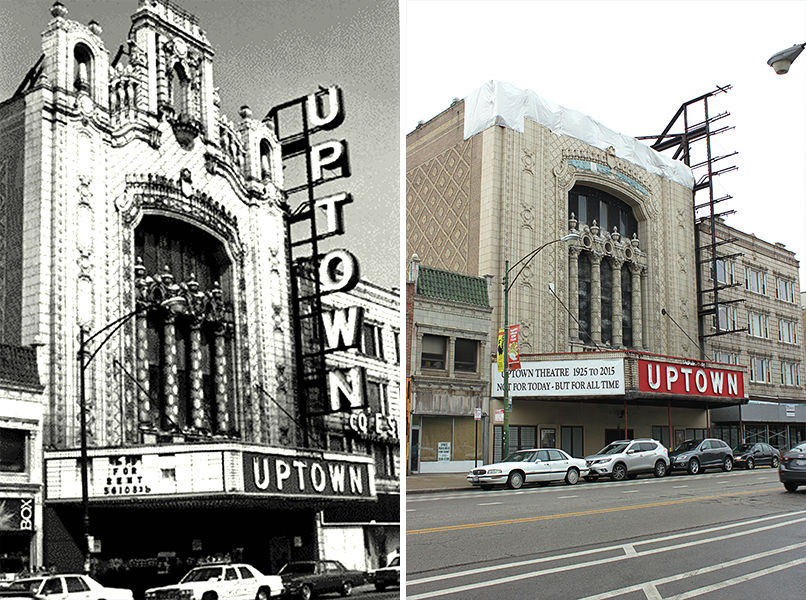 To meet city regulations, the Uptown Theatre’s eight-story facade was reduced to five. The difference is striking. 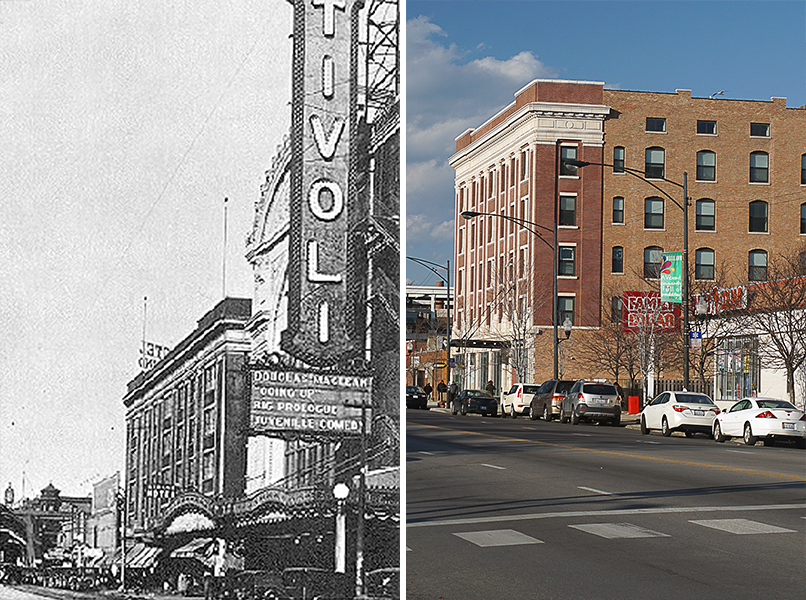 Not quite a palace but still committed to low prices, the former site of the Woodlawn Tivoli theater is now home to a Family Dollar. The movie house was closed in 1963 and demolished shortly after in 1965.

Balaban and Katz were businessmen who managed to build one of the largest movie chains in the country in the beginning of the 20th century. By 1919, when most of their competitors already owned regional chains, Balaban & Katz had only six movie theaters. The rise of the subsequent theater giants was marked by the completion of the Uptown Theatre in 1925.

By the time the Uptown Theatre appeared on the Chicago map, the corporation already owned The Chicago Theatre on State Street, the Tivoli on the South Side, the Central Park Theatre on the West Side and the Riviera Theatre on the North. Balaban & Katz advertised that now no one had to travel more than half an hour to visit one of their movie houses.

The Uptown Theatre attracted a citywide audience and became the gem of the whole chain, the jewel in the crown. When it was constructed, it was the largest theater by land and cubic size in the country and the third-largest movie theater by capacity with its 4,300 seats. The theater’s impressive size and unique decoration were not the only reasons the venue set the standard for movie palaces.

Balaban & Katz brought several innovations to the industry. They offered free child care, attendant smoking rooms and even air conditioning in the theaters. The corporation filled the venues with live stage shows, orchestra performances, even newsreels. Live stage shows themselves were not an innovation, but Balaban & Katz brought the idea to a whole new level. Andy Pierce, a volunteer for Friends of the Uptown, says: “Maybe they had the same product as everyone else, but for the price of your ticket you walked into the movie palace and you got all of that entertainment around the clock.” Their idea was to offer “continuous performances” that the audience could come in and enjoy any time. Balaban & Katz hired local stars to perform, and very soon they became more famous for their orchestra performances and amazing stage attractions than for any movie shown in their theaters.

The Uptown Theatre was the largest of the “Big Three” movie palaces that Balaban & Katz ever owned: the Uptown Theatre, The Chicago Theatre and the Tivoli. It’s noteworthy that all of them had very different fates. The Tivoli Theatre was demolished in 1965, 44 years after its opening, and now you can hardly find anyone who remembers that it was on the corner of Cottage Grove and 63rd Street, right between a hotel and the Grand Ballroom. The Chicago Theatre, which was acknowledged as a Chicago landmark in 1983, is one of the most significant and popular venues for live concerts and comedy shows in the city today. It’s a must for every tourist to take a picture with the bright and luminous Chicago sign on the building facade. The Uptown Theatre, meanwhile, seems to be stuck in limbo.

After the golden era of movie palaces, the Balaban & Katz corporation was sold to Plitt Theatres. The Great Depression, the popularity of radio and then the invention of television made their business less and less profitable. In the ‘60s and ‘70s the Uptown Theatre hosted concerts of legendary rock musicians. However, the theater had been worn down after decades, and there came a  point when repairs were needed badly. Rather than invest money towards the theater’s restoration, Plitt Theatres decided to lease the Uptown.

During this time the Rabiela family, who mainly ran movies in Spanish, operated the theater. Their occupancy was short lived and ended when they defaulted on loans. The theater returned to the control of Plitt Theatres, where it fell into decay. It was left unheated during several cold winters in the ‘80s, significant parts of plaster were damaged, and the venue became unusable without further restoration.

In recent years, the venue has served as a film set for such movies as “Backdraft,” “I Love Trouble,” “Home Alone 2: Lost in New York” and “Transformers 4.” But maybe there is a chance that what was once the entertainment center of Uptown will become the people’s attraction again.

A look inside The Chicago and Uptown Theatres provides us with a glimpse into the world of imagination conceived by the legendary Balaban & Katz Theater Corporation. The interior designs of both theaters synthesize European, Byzantine and Art Deco stylings, which furnished moviegoers with a decadent experience, often reserved for only those of extreme wealth. 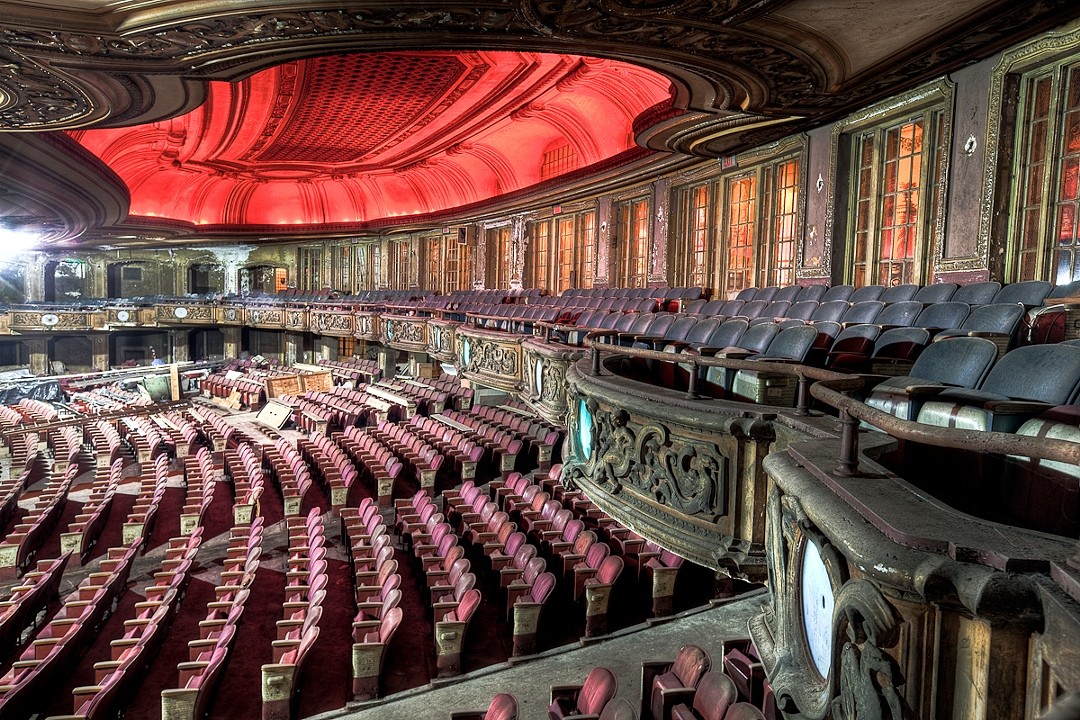 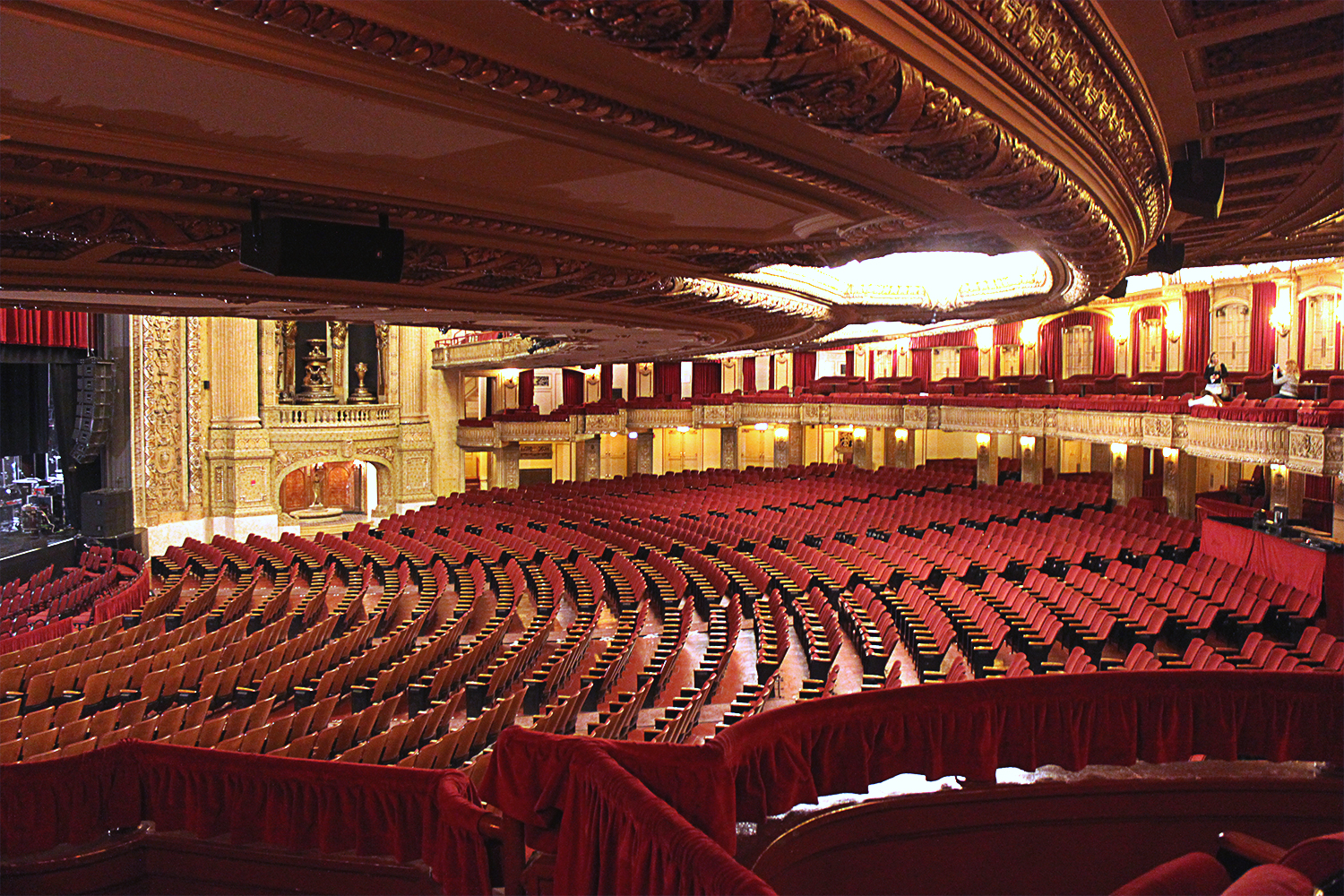 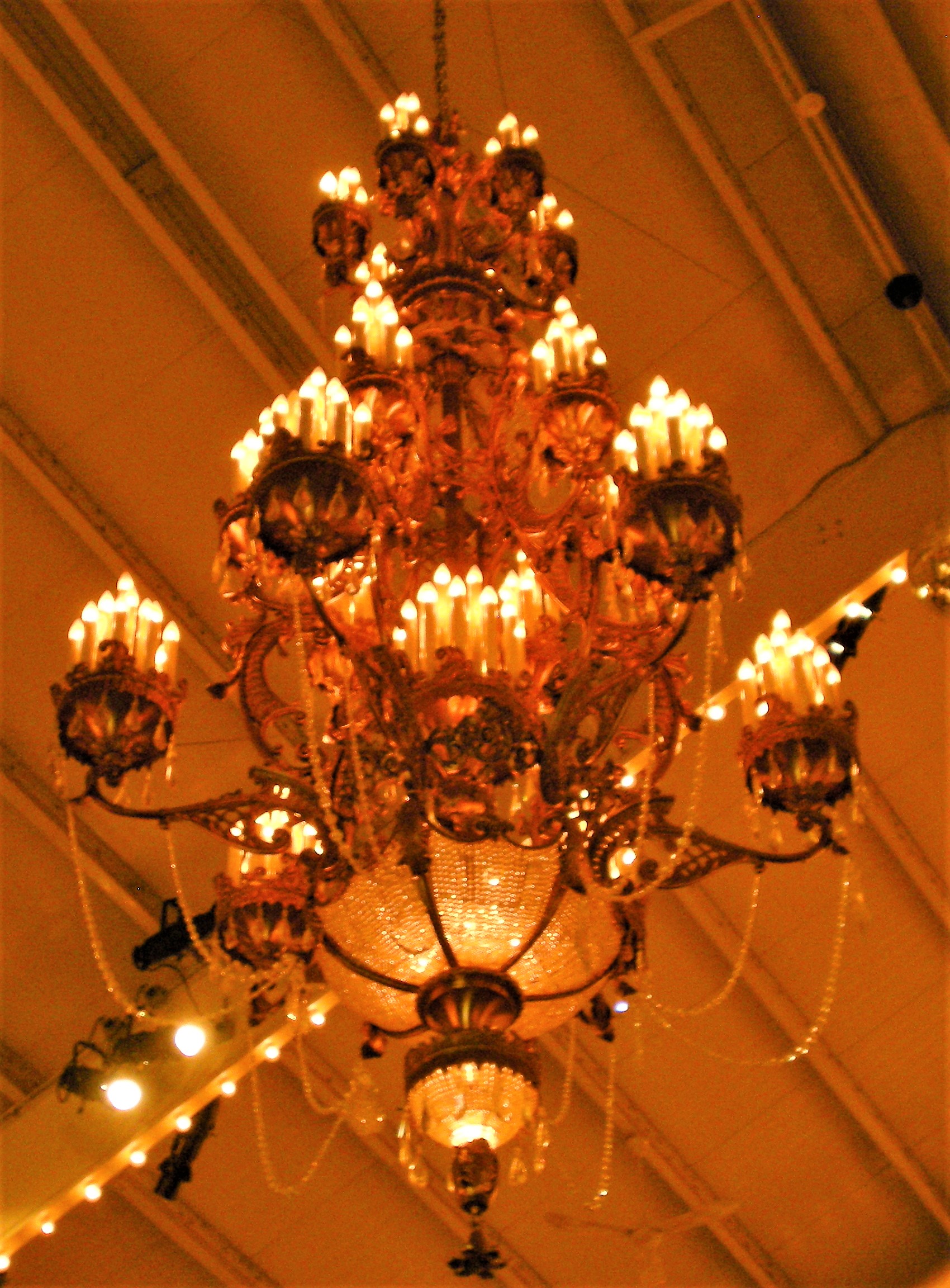 Once an amber glow, chandeliers from The Uptown Theatre sold at auction are now stored by Friends of the Uptown. (Photo: Andy Pierce) 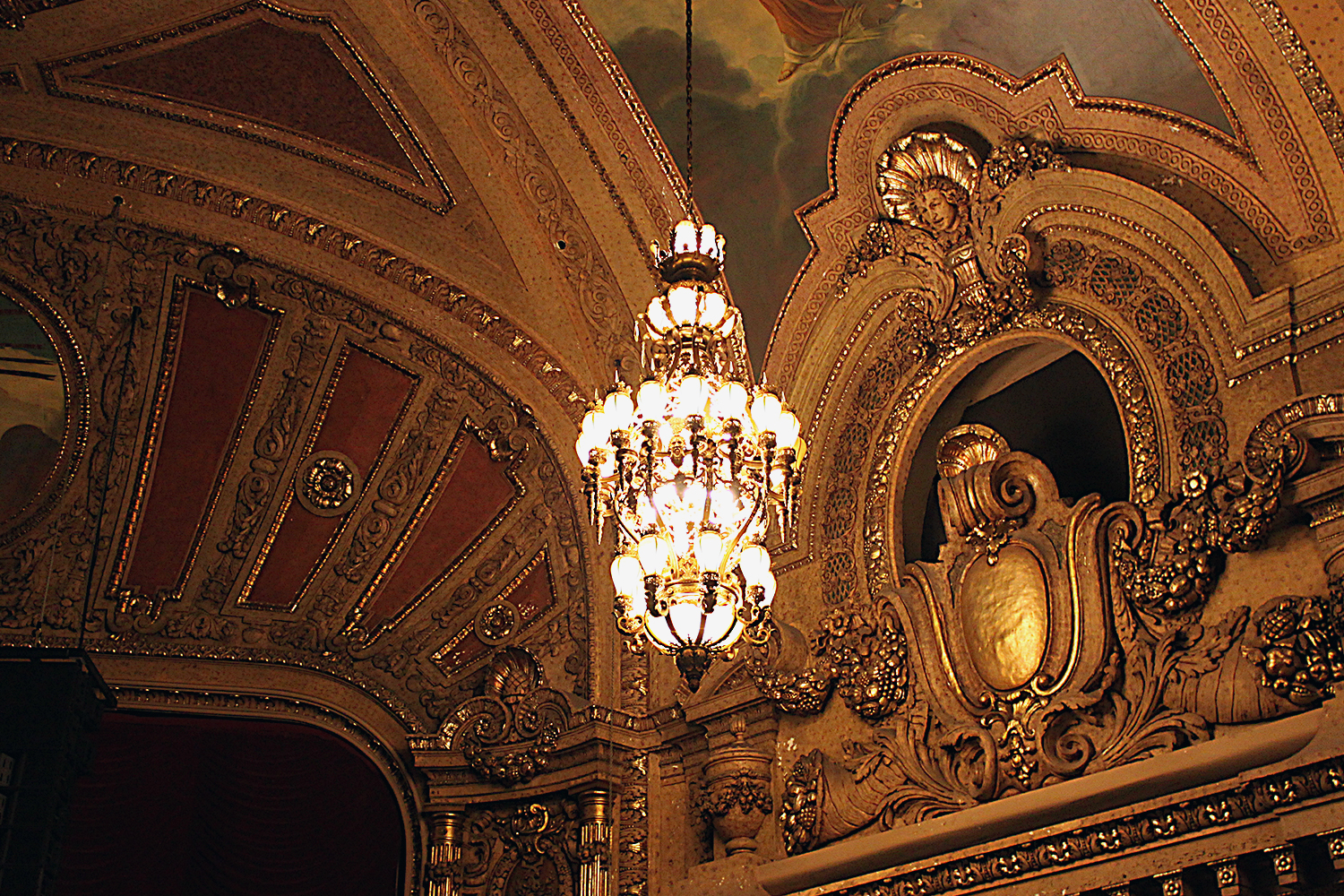 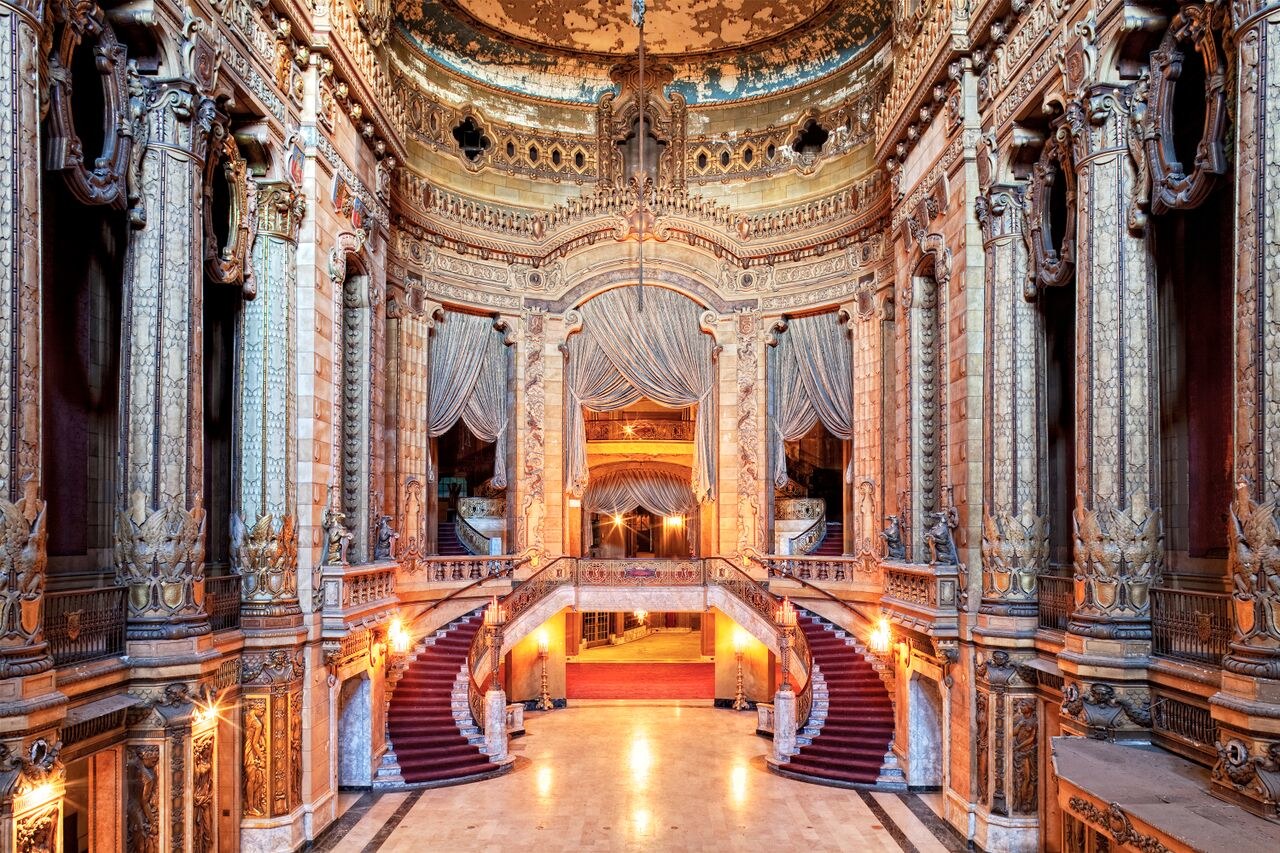 A combination of inclement weather and careless ownership destroyed the walls and ceiling of The Uptown Theatre, but the marble and terracotta remain intact. (Photo: Eric Holubow) 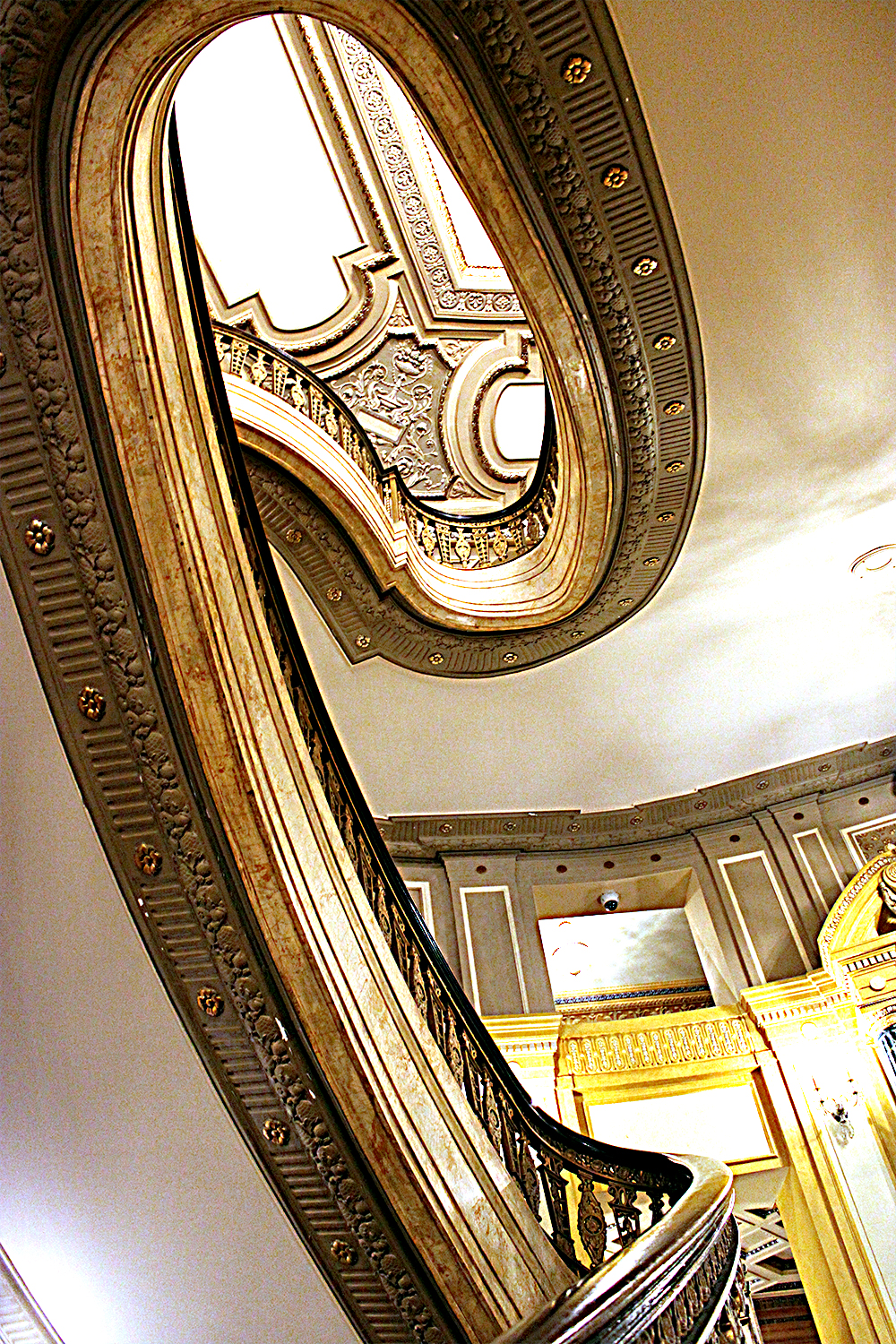 Perspectives of the Uptown Theatre

No one knows what JAM Productions has in mind for the Uptown Theatre today. The company did not respond to a request for comment. Several years ago, they stopped the tours that Andy Pierce used to guide and have not allowed the public into the venue.

Funding aside, it will never be possible to restore the theater to exactly the way it once used to be, no matter how much neighbors and true fans of the Uptown Theatre are craving for reopening the venue in its authentic design. Modern standards just won’t let it happen. Although the elevator-motion stage was a great achievement in the ‘20s, it has to be replaced due to the city standards – it is too narrow. There is also a discussion about what to do with the seats.

“The city said that we need to have multiple uses inside there,” Cappleman states, “looking maybe at multiple restaurants inside there, some movie space in there and some vendor space as well.” He confirmed that the primary use of the venue would be music.

On May 17 residents can take a tour of the Uptown Theatre. Citizens for Cappleman organized the event and proceeds will benefit the 46th Ward’s Alderman. Theatergoers can purchase tickets online starting at $100 for residents and $250 for nonresidents.

To learn more, click here for a timeline illustrating the history of movie palaces.