Meme Through the Emotions 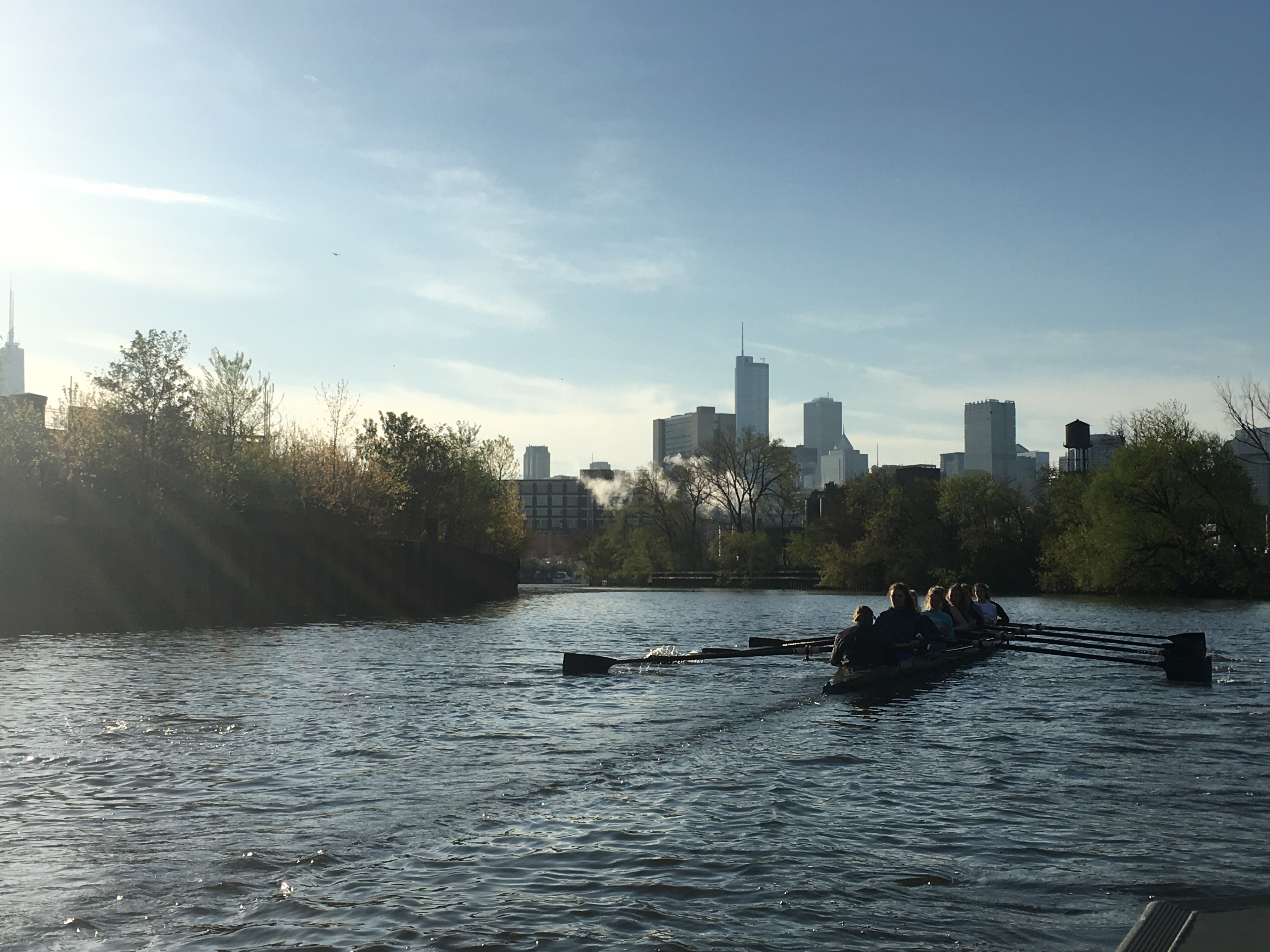 You are in a seated position with your arms straight, either holding onto the erg handles, or an oar. Knees are bent and you use your your feet to push off and your legs to push as hard as you can to apply pressure. Pressure is what makes the boat move, the harder you push off with your feet and your legs the more meters the boat can move.

The DePaul Rowing team is not known to many. But it means the world to the people who do, including me, and I have been on the team for six months.

Rowing –  or crew – is an intense sport. Oars move the boat (called a shell) through the water. Many different sizes of shells are used: eight boats, fours, doubles, or singles. When we can’t row on the water because the weather doesn’t permit it, we practice on rowing machines – called ergs. In Chicago, winter is erg season. The machines help us gain speed. We do two kilometer tests – the distance of an average race – at the end of winter to see how fast we have gotten.

Rowing is a mental game. Our body can handle a lot more than we think it can. When your body is on the verge of collapsing, your mental toughness allows you to finish. There have been times when I thought I could not go any faster. I would have to breathe and ignore the pain, and my mental determination allowed me to persevere.

Every morning our coaches will tell us we need to work ourselves to the point where we feel like we can’t do the next piece. If we don’t learn to work harder than ever before, we won’t know how far we can go past our limits. The coaches can see that better than we can. They encourage us to be the best that we can be. 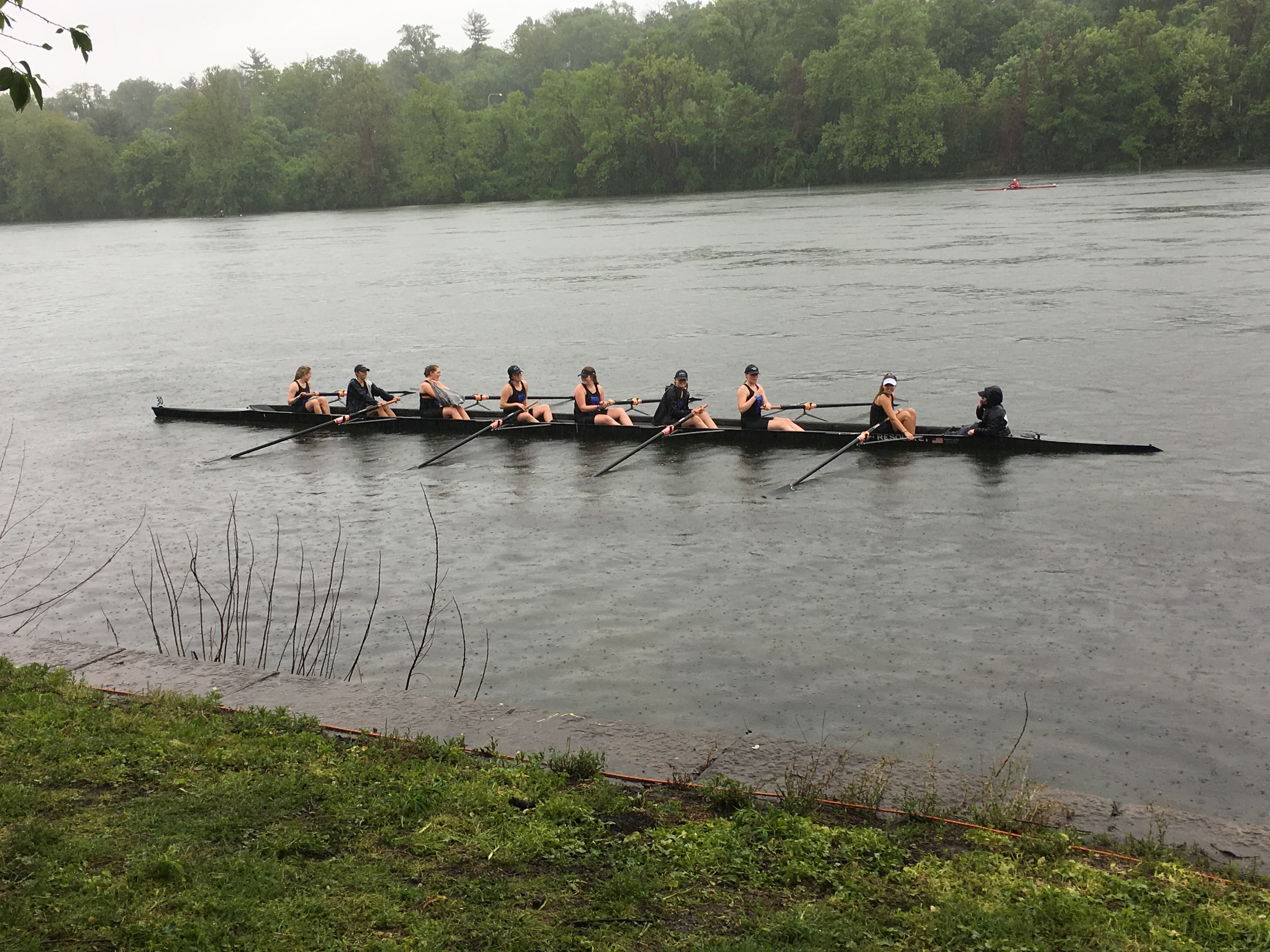 Rowing means pain. Your hands will bleed  from gripping and twisting the oars. Your whole body will be dripping in sweat after a race – or during an erg workout. Not everyone can wake up at 5 a.m. every morning to make a 6 a.m. practice where you need to be mentally and physically present, at all times. You have good and bad days at practice. Some make it hard to go through the rest of the day without being frustrated – you might not have done your best, letting down your coaches and teammates. Others can be a great start to the day.

I recently joined the team this past January, and still haven’t gotten used to waking up at the crack of dawn every morning to work my butt off for two hours. If you can tell yourself you can do it  – even when your body has had enough – then this is the sport for you. Despite the painstaking workouts, either on the water or the ergs, you stick with it because of the sense of community.

We joke that we are secretly insane for enjoying the feeling of working so hard to the point of almost passing out. During intense erg workouts someone usually mutters, “I am going to throw up.” The coaches bring a trash can by them in case they actually do. Even after a round of puking,  people still come back. The feeling of exhaustion, blurry vision, and your mind trying to focus on powering through a workout, is the insanity that rowers come back to every morning. Weirdly enough, that is why I stayed, because I love the feeling of working that hard. Knowing after every single workout, that I left everything out on the water is one of the best feelings. Adrenaline surging through my entire body, enjoying the accomplishment, is like submitting a paper seconds before the deadline.

“What made me really stay was my love for competition and the friendships I made,” DePaul women’s varsity member Madeline Bolton said. The competition is what drives this sport because seeing the other boats next to you during a race makes you work that much harder to beat them. The love of winning and the feeling of butterflies in my stomach during a race make this sport so thrilling. Almost like the feeling of a big drop on a rollercoaster.

While I have played team sports all my life, this is one of the most intense sports I have ever played because of every tedious aspect that comes with it. There is a rhythm to it. You have to stay in time with the others in the boat, or apply pressure to help move the boat. You’re always focusing on something –  every stroke you make. Zoning out is not an option. After every workout, muscles that you didn’t even know existed begin to hurt. Even after it feels like all your limbs have turned to mush, we do it again and again.

We have become close as a team because we spend every weekend together traveling for races, and every morning during the week together at practice. We take a huge bus to all our races that are out of state. Some of the bus rides have been long, and tiring – driving to Philadelphia, Georgia, Ohio, or Tennessee. We could be on the bus any where from seven hours to seventeen hours. At night, everyone is usually sleeping – or trying to – on the small and uncomfortable bus seats. But driving during the day can be fun. We will talk and laugh , watch movies on the bus TV’s, or even play games. This is where we get to know each other.

“I feel as though rowing itself is a tight-knit community. Rowing isn’t the most common sport around so I feel as though when you meet another individual who shares the same passion as you within rowing, you automatically form a special connection with them,” DePaul women’s varsity member Meghan Saulka said.

Bonding as a team off the water has improved our performance on the water immensely. Becoming better friends only makes you want to work harder because you realize you aren’t working as an individual, but you’re working with the rest of the girls in the boat. You become in sync and can anticipate everyone’s next moves. 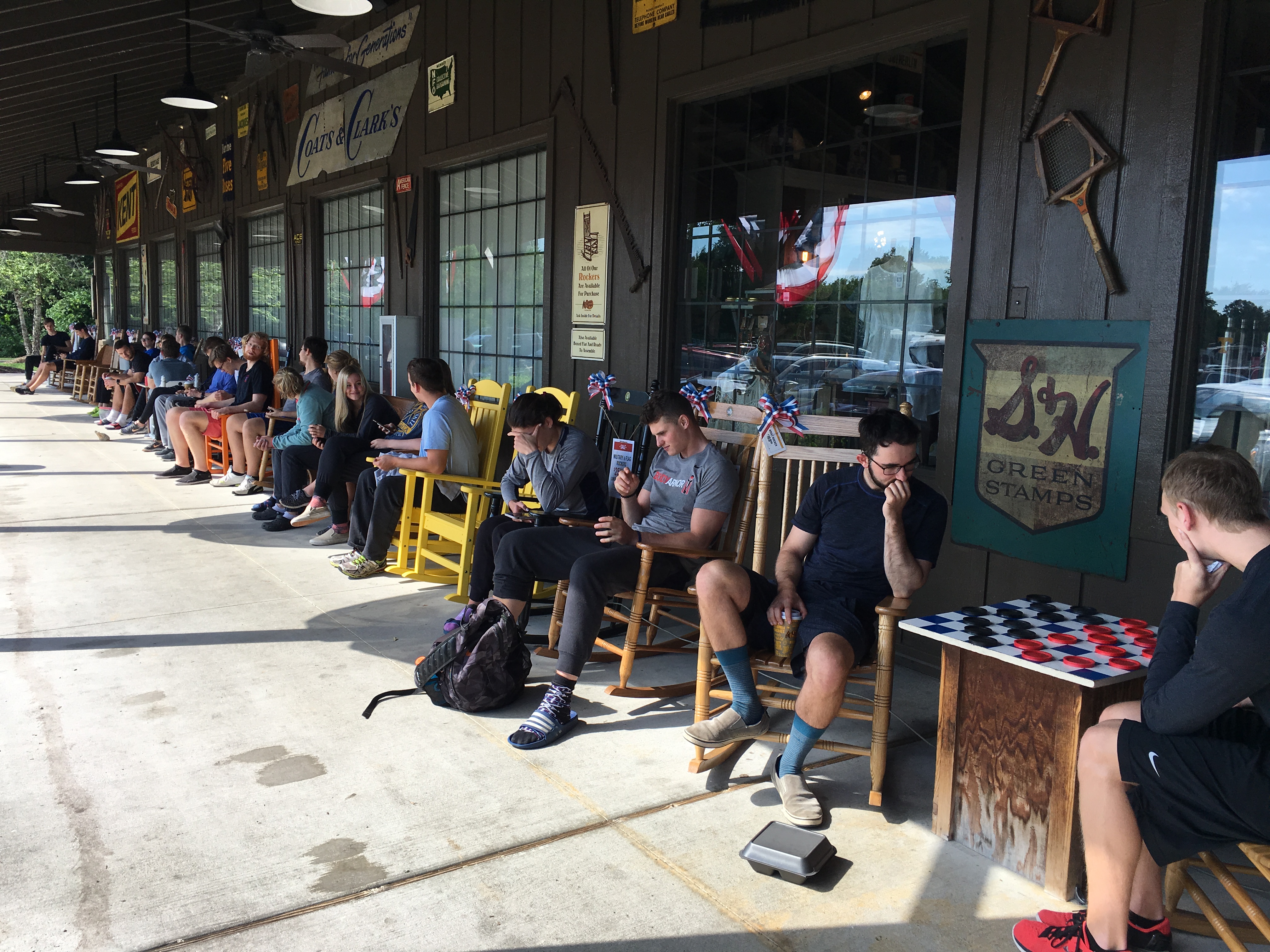 All rowers have the same goal in mind, to win, and are very passionate about accomplishing those goals, which makes it easier to work together and create strong bonds. Everyone respects one another because they know how hard you work every day to become faster. Not only do your teammates respect you, but other teams at races do as well. Passing by other teams at races carrying boats, you move out of the way, or wait for them to pass. Even though there are many teams that we don’t like (maybe because they are so good), you can’t help but appreciate the hard work they put in to make them as good as they are.

A lot of sports I have participated in, there have been those that walk around like they know everything, and are a million times better than you. They have that look in their eyes, when you do something wrong. If looks could kill. Rowing is different. At races, none of the other teams look down on one another.

“Everyone realizes that this isn’t something that anyone could do, and even if one team is better than the other, we are all participating in this really hard sport and doing as best as we can,” DePaul women’s novice member Hannah Marqui said.

Working hard at practice is a challenge, but it’s always worth it. This sport pushes you past where you ever thought you could go, and where you never imagined your mental toughness could be. It is worth it because it teaches you about yourself, and how strong you are as a person. It’s even more amazing going to all these races and seeing all the others crews working just as hard as you are.

It’s a selfless sport because you have to think about how to improve your team, rather than how to improve individually. Working as a team, in basketball, volleyball, lacrosse, or soccer, you don’t have to be doing the exact same movements as your teammates. In rowing you need to be making the same motions, not only with one person, but all eight rowers. If one person is off, it can mess up the entire boat.

Yes, the workouts are hard, and yes it is physically draining, but you have to push through the pain in order to see results and become faster. If you are merely going through the motions of rowing, than you won’t receive the benefits that come with being a rower. Feeling proud of what you achieved at practices or races, and being in the best shape. You don’t realize the strength you have until you keep challenging yourself to be better. 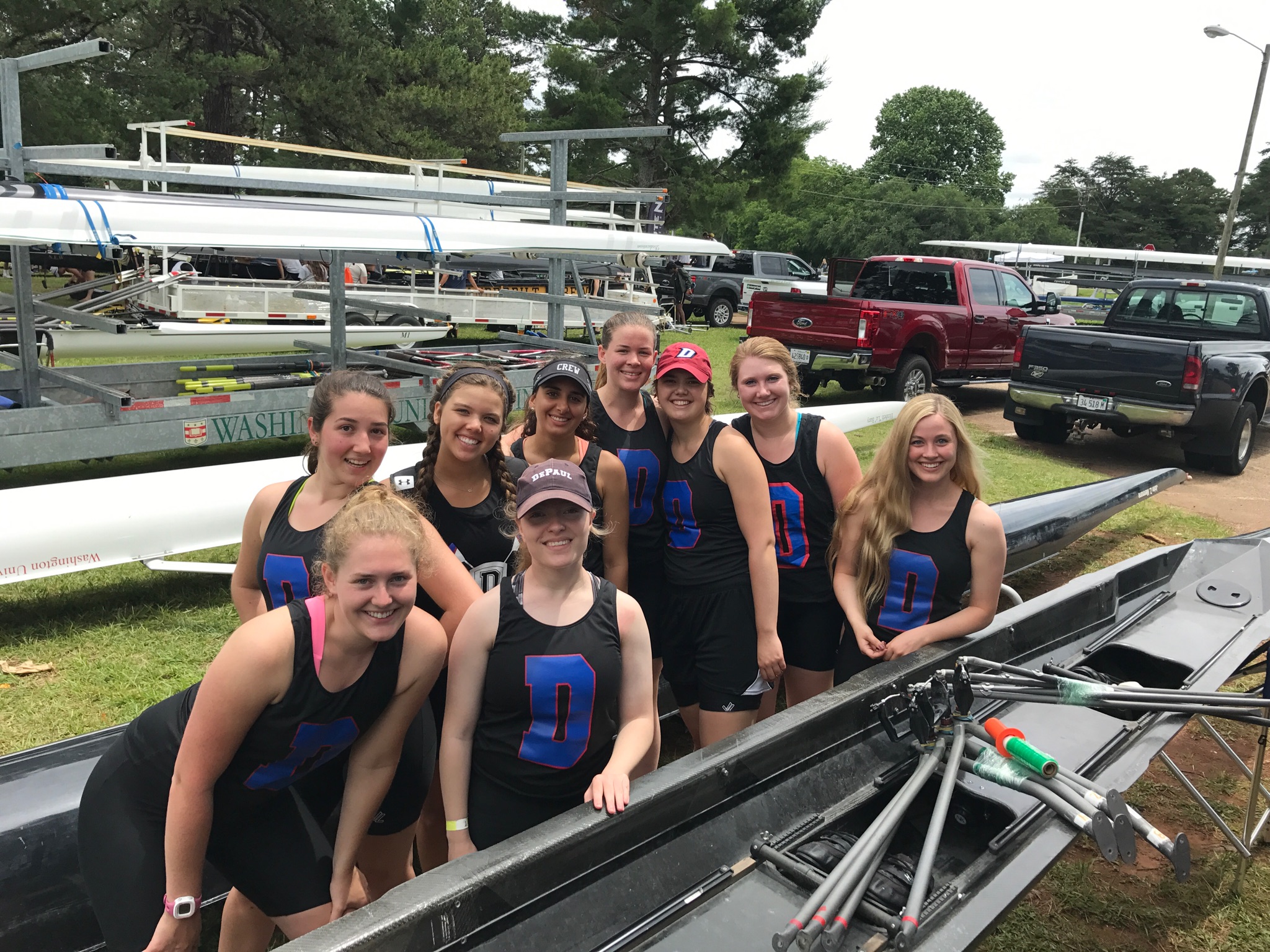 Novice women after the final race of the season