Let’s Blame it on the Rom Coms: Tavi Gevinson and ...

Let’s Blame it on the Rom Coms: Tavi Gevinson and the Legacy of Rookie 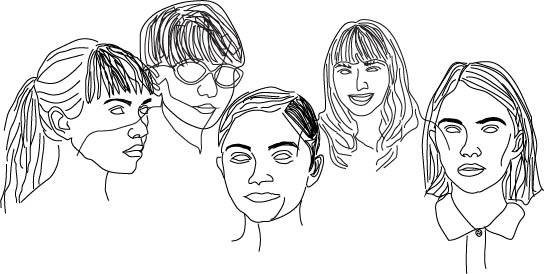 Tavi Gevinson, the previous Oak Park pixie and current NYC resident, came home to Chicago on Tuesday to talk about her online magazine Rookie and its latest publication, an anthology called “Rookie on Love.”

For those of you who don’t know her or weren’t a grossly misunderstood suburban teen, Gevinson made her name with Style Rookie, a fashion blog she started in 2008 at the age of 11 where she wrote about her style inspirations, the books she read, the movies she watched, and how they all came together and manifested in her style. It was a quirky girl goldmine.

In 2010, Gevinson announced her partnership with Jane Pratt, the founding editor of Sassy, and disclosed the buddings of Rookie, the start of an online magazine. In 2011 it launched, and it finally felt like space strictly for teen girls existed in the digital realm. It rocketed into what it is now: an online publication with over 500 paid freelance contributors, four “Rookie Yearbooks” and one anthology on love.

I started reading Rookie with my best friends in high school my sophomore year, and it felt like magic, a secret world we discovered where writers knew more about life than our moms. They had the answers to all the questions I hadn’t even asked yet. They wrote about experiences I hadn’t known, but that didn’t matter. Their words were magic and that was enough for me.

Rookie categorized the catalogue of teen-dom, like a digitized bible. I could turn to any passage to feel the reverberations of the pieces. It’s hard to believe a high schooler in the ‘burbs gave birth to such a poignant and necessary publication. Insecure, unaware and uncultured, the high school version of me could have never conceived of such a space.

To me, Gevinson was a god-like teen curator. She was this untouchable force. In high school, I’d always imagined her days went like this: She woke up, using her small hands to wipe the sleep from her eyes, and she’d stumble out of bed fully clothed and ready for the day and she would look in the mirror and her blue hair would already be in place. She walked to school with a thrifted book bag weighed down only by old magazines and cassette tapes. On Fridays, she would meet up with her friends and hang out at her local park, fooling around and kissing each other and falling in love and writing about all their misadventures. Oh, and everything had a pinkish-orangish hue to it, like L.A.

And now I’m 20, and on Tuesday I sat in a crowd of about 40 girls and a few moms at The Book Stall in Winnetka. Gevinson stood a few feet in front of me, hair pulled back in a blonde ponytail. Chunky, gold, daisy-shaped earrings hung from her lobes, and she wore a patterned shirt reminiscent of the ‘70s tucked into red bell bottom pants. She looked like a faint version of herself who ran a style blog with blue hair.

Gevinson, soon to turn 22 in April, talked about hookups and mansplainers and living alone, and — finally  — it all made sense. I’ve slept with that hookup and I’ve heard that mansplainer and I’ve lived alone. It felt like for the first time Gevinson was a real person, the teenage facade gone. At one point, I tricked myself into thinking she was this untouchable figure, a teen who happened to experience this hyper-realistic version of life and also had a blog and also ran an online magazine.

But now, sitting across from her as a 20-year-old six months past her teen-ness, I see Gevinson is just a woman.

In the bookstore and on the train home, I felt cheated, like the magic went away, but, logically, there wasn’t any magic to begin with. Gevinson wasn’t someone who painted herself to be anything special; rather, she placed herself in the same space as her peers, the same space as girls her own age. She did so by rooting herself in the experiences we all share, in explicating them and bringing them into the public, digitized sphere. She was really good at being a teen.

But that’s what made the idea of her tantalizing. Gevinson was magical because she didn’t let herself be magical. She grounded herself in these shared experiences, these intangible feelings surrounding love, friendship and youth which we as a culture have seemingly defined as the white-suburban-teenage-dream. She picked out and held onto these cinematic moments in our everyday which mirrored the ones we’d see in John Hughes and Sophia Coppola movies. It may not seem like much, but she pointed out these experiences and publicly interrogated the teenage narrative and trope at such a young age that it placed her further up in this unspoken teen hierarchy.

I put the magic there.

I projected my own suburban teen magic onto her, and she transformed into this idyllic and softly-lit representation of everything I could ever want  — a writer, a lover, a daughter, a friend, a girl. But now she’s just a woman from Chicago who got lucky and knew “adults”  — as she said  —  established in their field, connections to help her online magazine come to fruition. Where did the magic come from in the first place? Why did I place her in this untouchable realm of godliness? Yes  — she was an idol, but why did I romanticize the idea of her?

Let’s blame it on the rom coms. And the entire market born for the capital of the “teenager.”

The capitalization of youth and the romanticization of its surrounding culture seeped into my very ways of interacting with the world and the people I looked up to. My fantasy of her and her life was a byproduct of the heavily contrived and idealized alternate versions  — and arguably better versions  —  of reality we were seeing in our TV shows and in our movies and in our books growing up. It’s this sort of unattainable cinematic magic inspired by these montages of teenage love, of teen escapism.

Adults unintentionally question the very market their generation created for teenagers. An 60-something female journalist covering the “Rookie on Love” book release for local newspapers raised her hand during the Q&A and asked Gevinson why our generation wasn’t reading. She wanted to know why previous generations were more engaged and, by default, read more than the young people of today.

Gevinson laughed  — or maybe it was a scoff? I couldn’t really tell because I scoffed too.

She politely pointed out that we were at a book event and that Rookie exists in words and is rooted in reading. But then she went on to argue for fiction and the purpose it serves. In many ways, it gets young people to start reading in the first place. It’s the first type of narrative we are introduced to, and for a while it’s all we read.

I was angry at myself for believing in this market once, for being raised on rom coms and movie montages and this manufactured teen-dom. I once believed in it wholeheartedly like a religion and fell into it, and even now I still find myself being drawn back to it with self-created montages of my past or future or never-will-be-but-might-be life.

It’s frustrating when I find myself falling back into it because I want to be practical. I want to know myself fully and to be present and to take things as they are and accept things as they happen. I’m trying to catch myself from falling into these fantasies and fallacies, but with that I feel I’m denying myself of magical realism, of escapism. I have rooted myself in reality, and I cannot shake reality  — or, rather, reality cannot shake me.

In many ways, these fictions serve as a gateway to reality, the unabridged version of these alternate realities we initially consume as readers and viewers. They’re an introduction to the real world. Slowly, we find the more pertinent pieces to read in news magazines and in newspapers and in online magazines and in anthologies.

I think we’re always a teen in these respects. Once we cross into the unabridged and unkind world, we’re always seeking out the magic we found in fiction and sometimes — only sometimes — actually finding it buried in our everyday. It’s in our hands now to vet whether or not it’s even worth spotting, whether or not our lives are realistically comparable to rom coms.