Our Music My Body Brings Conve.. 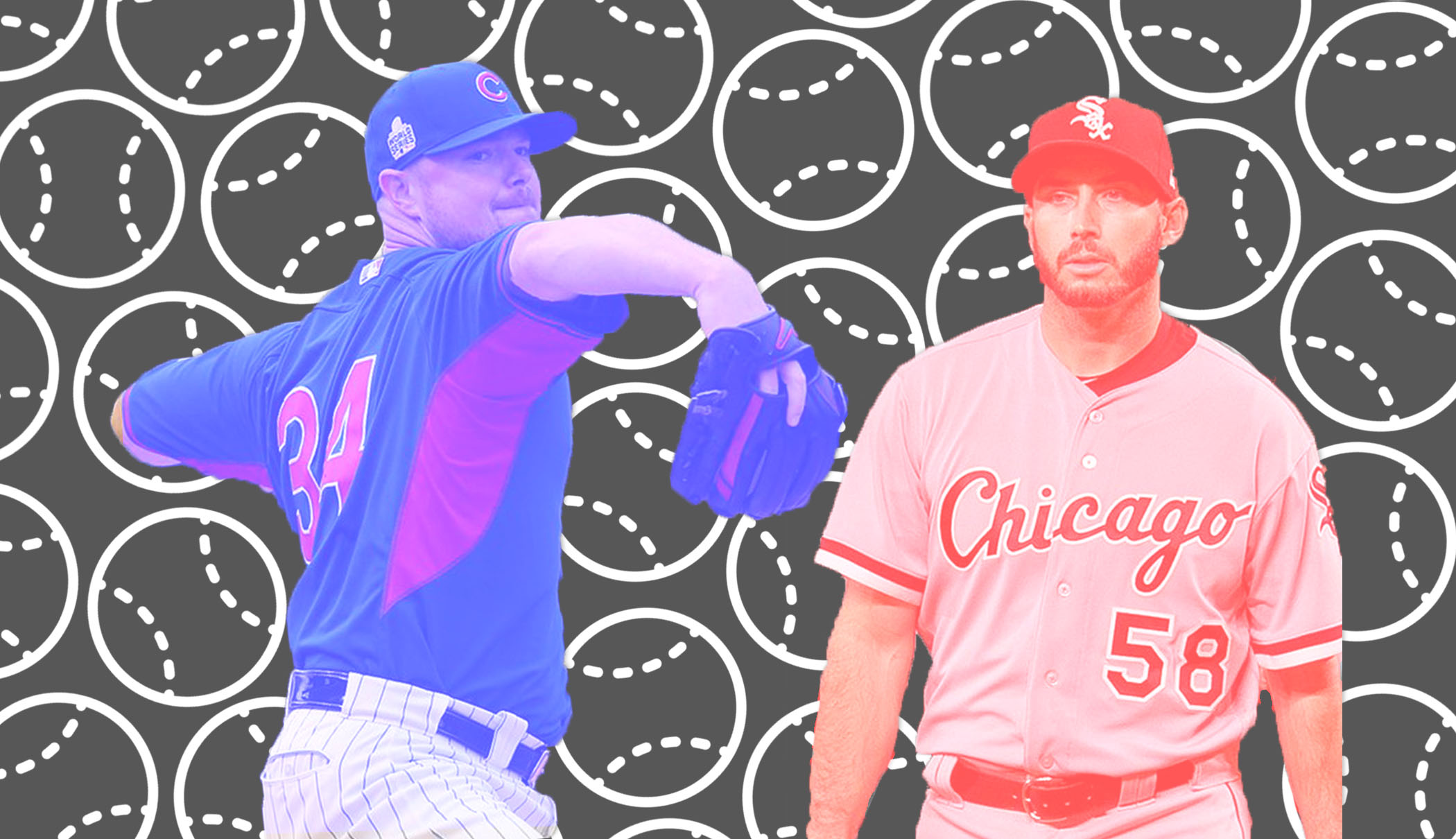 There are few events that can bring together a group of people and instill feelings of hope, excitement, and enthusiasm the way baseball’s Opening Day can.  Whether your team is supposed to win it all or finish dead last, it means nothing on the day of inaugural games. Opening Day is like a blank page for every team to write their story beginning, middle, and end. The start to the season also serves as a new beginning that both casual fans and baseball junkies anticipate. Gone is the cold weather. Gone is the frigid snow. The sun is out and baseball is here, every single day. Hami Arain of Radio DePaul Sports is a White Sox fan, and he has some pretty lofty expectations for the South Siders this season. Being the baseball junkie that I am, I couldn’t wait to hear his thoughts and share my own.

Arain considers himself more of a casual baseball fan. He enjoys basketball more than most sports, but is eager to get back into baseball and watch more games. However, it can be difficult to embrace the daily dosage of baseball when you’ve had football once a week, or basketball every couple of days or so. Getting back into the swing of baseball doesn’t happen overnight. I share Arain’s belief, especially since it’s still snowing or raining outside at times. Arain and I both agreed that Opening Day is supposed to mean the start of spring and summer. It is a sign of what is supposed to come, and when there is horrendous weather outside, the thought of being outdoors and playing baseball is the last thing on anyone’s mind. But Opening Day isn’t just about the anticipation of what is to come—it is also about tradition as well.

Annual events or festivities that are celebrated almost religiously often incorporate shared traditions among the participants. Baseball gatherings at this time of the year are no different. While Arain shared with me what he usually does for baseball games, he didn’t say if he had any particular traditions. I, on the other hand, am different. Weather permitting, hot dogs on the grill are a must.   To me, there is no better combination than hotdogs and baseball. Arain has his snacking traditions as well, but he reserves those for actual trips to games. He sticks to the basics of ballpark food for his snacking needs during the course of baseball games, and he prefers popcorn and ice cream.

If you are impatient like myself, baseball movies might satisfy your needs until the games actually begin.  Personally, I enjoy the films “Major League” and “Rookie of the Year” on Opening Day. “Major League” places a group of characters on the Cleveland Indians’ baseball team that set out to have a successful season despite their team owner deliberately assembling their team with the expectation of losing so that she can relocate the team out of Cleveland. The team, led by characters like Rick “Wild Thing” Vaughn (Charlie Sheen), Jake Taylor (Tom Berenger) and Pedro Cerrano (Dennis Haysbert) are among a few of the players that lead the team to a successful season and thwart the plans of their team owner. What Cubs fan couldn’t enjoy the 1993 film “Rookie of the Year” starring Thomas Ian Nicholas who plays Henry Rowengartner, a clumsy 12-year-old who trips on a baseball, breaks his arm, and to his shock afterwards, is able to throw a baseball over 100 miles per hour? In fact, Henry manages to get the attention of the Chicago Cubs and after joining the team, leads them from last place to a World Series Championship.

As exciting as the game is for junkies like myself, keeping fans excited all year long can often be a challenge. As a fan who doesn’t tune into games as regularly, Arain, like myself, wonders why baseball struggles to remain popular compared to football and basketball in the U.S. Sports like football have whole days dedicated to them from Thursday through Monday. Arain says he believes this shouldn’t be the case and that he is moving more and more away from football.  In today’s day and age of concussions and CTE being a very serious part of the game, Arain hates to see these players beating each other up in this brutal game knowing the long-term effects it could have on their health.

What Arain believes separates baseball from the other sports is that it does not have marketable stars the way the other sports do.  In the NBA there’s Stephen Curry and Lebron James. The NFL has Tom Brady, Julio Jones, and Aaron Rodgers just to name a few. You can’t watch any commercial or go anywhere on the Internet and not see their faces in some ad or commercial. In baseball guys like Kris Bryant, Bryce Harper, or Giancarlo Stanton are not on the cover of every magazine, or in every commercial the way football and basketball stars are present. Perhaps they aren’t as relatable as NBA or NFL players, but not putting them out there hurts the sport. There could also be the fact that they don’t interact with fans the way other athletes do. Former NBA player Kobe Bryant is active on social media outlets like Twitter and Instagram. As the NBA playoffs are going on right now, Utah Jazz rookie Donovan Mitchell is active on Twitter during games in which he is not playing. During the regular and postseason, MLB players are not nearly as prolific on social media. Former Cub Miguel Montero was undoubtedly the most active Cub on twitter. Such interactions with fans could make these players more recognizable, thus generating more interest in them and the game they play. This could be a cause for declining interest among casual fans.

The special thing about baseball is that anyone can win the World Series.  We’ve seen teams dominate the season from start to finish and we’ve even seen teams that weren’t as favored come out of nowhere and shock everyone. As exciting as the journey to the title can be, the World Series can often be the most exciting part. Arain’s favorite memory of the World Series was the White Sox in 2005, when the team took home its first title in 88 years. What he remembers best about that series was that even though the Sox swept Houston in 4 games, every game was decided by 2 or fewer runs. While the 2016 World Series was my obvious first choice, I tried staying away from the Cubs when we shared our thoughts. My second choice was the 2009 series between the Philadelphia Phillies and New York Yankees. This series had a number of interesting storylines that were too good to pass up. The Yankees were playing in their first World Series since 2001 and by “New York standards,” that is an eternity. On the other side you had Pedro Martinez pitching for the Phillies.  Martinez was a key component in the Yankees rivalry with the Boston Red Sox that saw some epic showdowns in the early 2000’s. But the biggest headline of that series was that the Phillies were the defending champions and looking to become the first repeat champions since the Yankees won three titles from 1998-2000. For a short time, it looked as though they might achieve that. Philadelphia won the first game but dropped the next 3 to fall down 3-1 in the series. The Yankees went on to win the series in 6 games. As hate-able and dislikable as the New York Yankees are, I’d be lying if I didn’t say a small part of me was excited for that team. They defined dominance and success better than any other team in all of sports and when the Yankees are good, it’s good for baseball.

While strolling down World Series memory lane is always fun, for fans like Arain and me, the here and now is what matters most. The White Sox are in the middle of a rebuild that they hope will lead to sustained success that models that of the Cubs and Houston Astros, last year’s defending World Series Champions. Last year, the Sox won 67 games, good enough to finish fourth place in the AL Central Division. Arain believes that a winning season of 82 victories is a reachable goal, but the team will have to play above its current talent level. While he doesn’t expect much from them, he does believe that winning somewhere between 76 and 79 games would show true signs of progress that the Sox making strides in their rebuild.

About 10.5 miles to the north, the Cubs are coming off their third straight NLCS appearance. Disappointed that they were not able to repeat in 2017, the Cubs added two new faces to the pitching rotation. Yu Darvish came over from the Los Angeles Dodgers looking to silence critics after his disastrous game 7 World Series performance last season. Also joining the rotation is Tyler Chatwood who pitched for the Colorado Rockies from 2012 to 2017. Chatwood never finished with an ERA under 3.15 in Colorado and 3 times finished with an ERA over 4.50. The Cubs believe he can change that here now that he doesn’t pitch in Colorado, one of the most hitter-friendly parks in the Major Leagues. Because the city is so high above sea level, the air is thinner, and that makes it easier for batters to hit balls longer and farther out of the park. Expectations are different on both sides of town, but promising nonetheless. This Opening Day has Chicagoans sporting black and white or red and blue believing their teams will give them plenty to get excited about and that this season will bring lots of fun and great baseball memories.