When asked what she wanted to be when she grew up, Kelly Fryer said Ernie Banks.

She didn’t want to be the next Ernie Banks. Nor did she want to be someone like him. Baseball bat in hand, boasting jersey number 14, she wanted to be Ernie Banks.

Banks was the first Black player for the Chicago Cubs. Nicknamed Mr. Cub, he was among the first players to be drafted from the Negro Leagues into Major League Baseball. In 1953 he joined the Cubs where he played for 19 seasons as shortstop and then first baseman, breaking racial barriers in Chicago and becoming a beloved household name. Though Kelly couldn’t articulate it at seven years old, she was drawn to Banks because he helped people think differently about things they thought they understood. Kelly felt called to make a difference and she watched Banks do so for race relations in Chicago. So why not be him? Or the Pope? Or the President?

Living in Hammond, Indiana, becoming the governor of Arizona might not have been on her list of future careers. Though almost 50 years later in a state that she calls a “microcosm of everything that is happening in the country” — from LGBTQ and reproductive rights to poverty and immigration — governor is what she has her eyes set on next.

Growing up, Kelly’s mom worked in her school’s cafeteria, her dad served in the navy and her grandfather was a union organizer. As a member of student government she advocated for better school lunches. At Valparaiso University, where she studied economics and political science, she organized a protest in the Dean’s office to improve crowded housing conditions.

After receiving her Masters of Divinity (MDiv) from the Lutheran Theological Seminary in Philadelphia, Kelly moved to Compton, Illinois, in 1989 — a village two hours west of Chicago with a population of around 300 people. There she led the congregation at Immanuel Lutheran Church. The country was an adjustment for Kelly, as she was accustomed to living in a city. As the first female pastor at the church, Kelly’s leadership was an adjustment for the congregation. Nineteen years earlier, in 1970, the first woman was ordained in Evangelical Lutheran Church. While female pastors weren’t unheard of at that time, they were rare.

“I think one of the reasons that we grew so much at Immanuel is because nobody had ever seen a woman pastor before — it was novelty,” Kelly said. “I’m like, ‘I can use that.’ If you come in because it’s a novelty but you actually hear a sermon that is amazing and you felt really moved and something happened in your heart, you know? So it’s an opportunity — using my difference to help people shake out of the way they’ve always done things.”

My mom grew up in Compton, Illinois. Immanuel Lutheran Church was — and still is — her family’s church. By the time Kelly became the pastor of Immanuel my mom had already left home. When my dad proposed, my mom decided she wanted to be married in the church she attended growing up. So, Kelly officiated the ceremony.

Shortly after Kelly left Immanuel to practice at Cross of Glory, a fading church in Homer Glen, Illinois, the Bishop tasked her to either close it down or revitalize it. The congregation was in debt, ending each year in a deficit and many members felt despondent about its future.

“I like walking into a place where people only see what’s wrong,” Kelly said. “I can remember my first week at Cross of Glory people were saying things like, ‘We’ve tried to grow here and nobody lives here except a bunch of divorced Catholics —’ like that’s what somebody said. And I’m like, ‘God that sounds like an amazing opportunity.’”

Coincidentally, after moving to Orland Park for work, my mom and dad found themselves five miles from Cross of Glory. One evening, Kelly showed up at my parents’ doorstep and invited them to join the congregation, which they did. A few years later, they had me. Because I was only there for the first three years of my life, my memories are vague, consisting of familiar images and shapes. Crossing paths infrequently, I know her best through Facebook updates and stories others have told me. 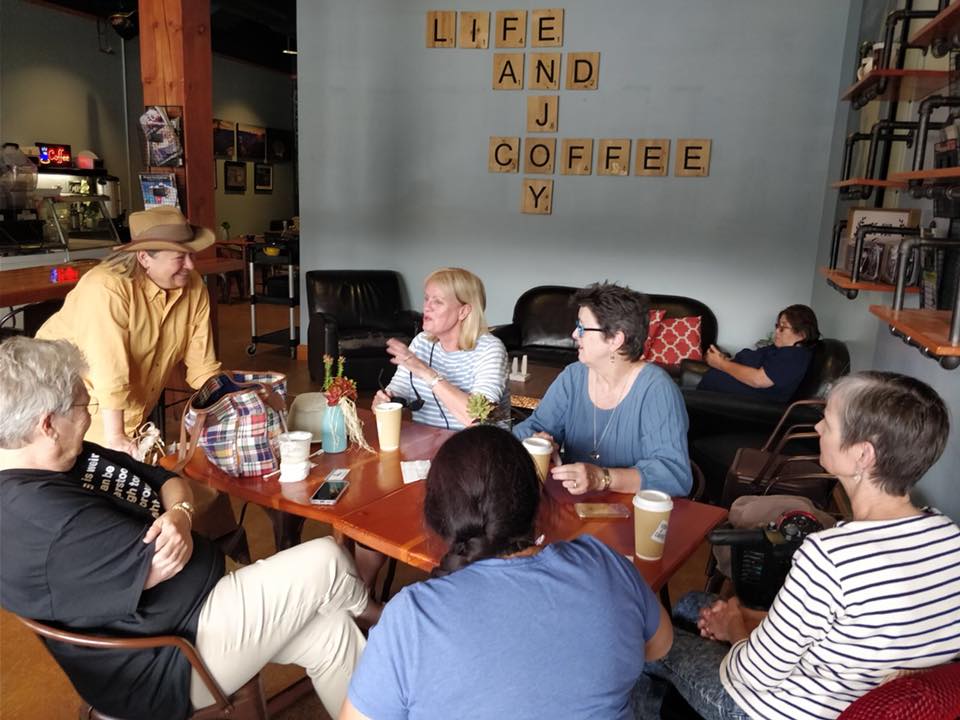 Kelly showed up at Deborah and John Terry’s doorstep, too. Deborah thought she was looking for directions. Instead Kelly was looking for new congregation members. She was resistant — they weren’t a religious family and their children hadn’t been baptized — but she put her name down for the newsletter anyway. Not long after, she and her family were regularly attending Sunday services.

“You know, I’m not religious to be honest with you,” John said. “I went because Deb wanted to go. Kelly’s sermons just pulled me in. But the spirit of that whole congregation…it was beyond dynamic.”

“It was a piece of nirvana,” Deborah said.

Current and former congregation members speak about their experiences at Cross of Glory  with nostalgia and pride. They weren’t only invested in the congregation but they were drawn to the warm presence Kelly had.

“She just had an energy and vibe that was very contagious,” said John Atkinson, the former chair of the Cross of Glory Church Council. “She has that charisma where you’re like, ‘Okay this is somebody I want to be around. I like this person.’” Kelly would later go on to manage Atkinson’s campaign for the third congressional district in Illinois.

Kelly spent 10 years expanding and developing Cross of Glory. They sold the property the church resided on — a “controversial” decision at the time, according to Atkinson as some members didn’t think the change was necessary. Kelly began holding services wherever she could, including a middle school gym and an old convenient store. Even without a physical location, the congregation grew. Eventually, Cross of Glory built a new Church on a different property, where it still stands today.

Kelly also switched up the traditional way of doing services. Typically a pastor leads the entire service, including the sermon and communion, but Kelly created a preaching team, which my dad and John were on, and every once in a while she asked them to run a service.

After 10 years at Cross of Glory, Kelly left the church. She later founded A Renewal Enterprise (ARE), a small communications firm for faith-based and values-driven organizations with Tana Fryer, who she married in 2006 and again in 2016 when their marriage was recognized in the United States. They moved to Arizona in 2010 and eventually shut down ARE.

“There were some pretty difficult years there after Tana and I got together,” Kelly said. At the time, gay and lesbian folks weren’t allowed to be clergy members.The Evangelical Lutheran Church has since since overturned the policy, but Kelly and her family received a great deal of backlash after she came out. “We were just ready to be some place where we knew nobody — new friends, new opportunities, a new place to be. Arizona was going through a really difficult time when we moved here.”

Kelly notes that in 2010 the Arizona state legislature passed SB 1070, an immigration law that made living in the United States without documentation a state crime. The bill has since been dismantled.

Kelly served at the Executive Director for Arizona List, an organization that supports pro-choice women running for local and state office, and is currently the CEO of the YWCA of Southern Arizona. After the 2016 Women’s March, Kelly began recruiting — or trying to recruit — a woman to run for governor.

“I thought if we put up a powerful woman to run for governor — and all down the ticket —  but especially in that office, we’ll win,” Kelly said. After lobbying for women to run for office, she was told to run herself. She said she spent most of 2016 saying “no” to running. Though the more she did, the more uneasy she felt. In December 2017 a friend asked her “why not?” and she couldn’t come up with an answer.

“The next day, I woke up and I said to myself, ‘I’m going to spend today living into the yes. I’m just going to pretend like I’ve said yes,” Kelly said. “By noon I called Tana and I said, ‘I think I have to do this and she said, ‘It’s about f—king time.”

“You know, she had to decide that on her own,” Tana said.

“Even after having the career that I’ve had, always stepping into spaces where the odds are really stacked against me — to go through this experience myself and reflect on how difficult it is as a woman to make that kind of a decision and just put yourself out there… That’s just not how, at least my generation, was raised.” 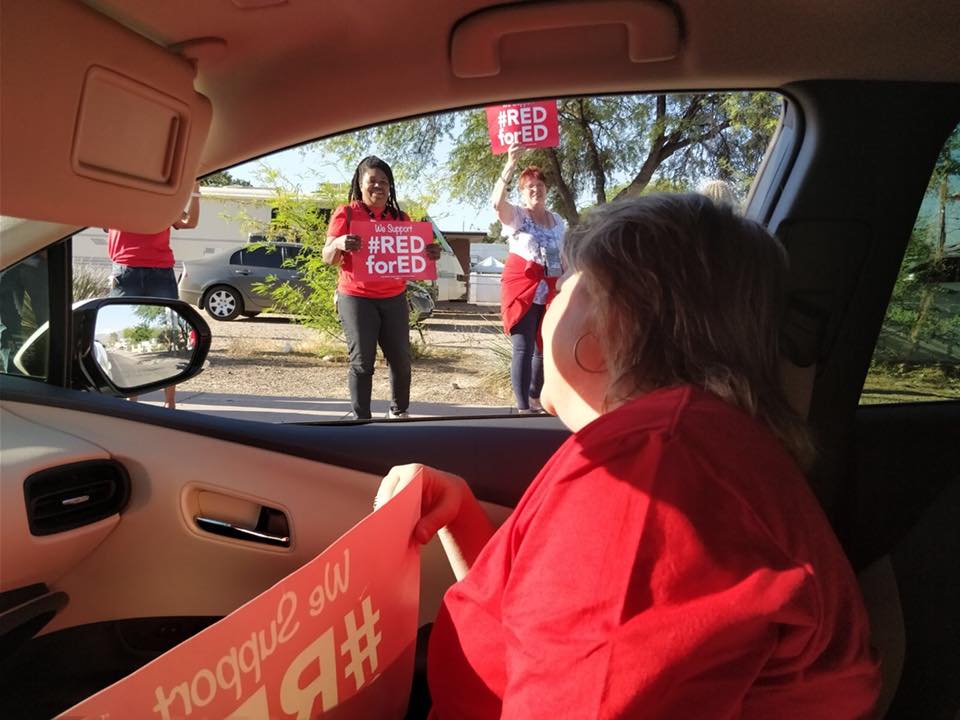 Kelly announced her run for governor on January 9, 2018. Between February and May 2018, she traveled over 10,000 miles in her blue Toyota Prius, visiting every county in Arizona. She called this “the real state-of-the-state tour.”

“I really want to go back to some of these places where we’ve been because this isn’t about getting votes,” Kelly said. “It’s about building a relationship with people around the state — a relationship that will continue.”

At the end of May, Kelly’s campaign filed 11,017 signatures — 5,216 over the number needed to get her name on the ballot for the August 28, 2018 Arizona democratic primary elections — according to the Arizona Secretary of State’s website. Kelly is running against two Democratic candidates: Steve Farley, an Arizona state senator, and David Garcia, who was an associate superintendent of the Arizona Department of Education. When she entered the race, Garcia and Farley had already been campaigning for over six months.

“I got in because I didn’t think that either of the other guys could win,” Kelly said. “They’re really great guys and I have a lot of respect for both of them. They’ve done good work. But for a variety of reasons I was sensing that this year people want to have options that are women.”

This sentiment is felt across the country. In March, Politico reported that at least 575 women announced their intention to run for office. According to Bloomberg, an estimated 77 women are expected to run for governor in 36 states this year, many of whom are seeing success.

On Tuesday, political newcomer Alexandria Ocasio-Cortez defeated 19-year incumbent Representative Joseph Crowley in New York’s primary elections for Congress. In Illinois, women are candidates in race being closely watched. Democrat Lauren Underwood will run against Randy Hultgren and Betsy Dirksen Londrigan against Rodney Davis for Congress in the general election in the fall.

In Arizona, the Democratic candidate that wins the primaries will either run against incumbent Doug Ducey, the former CEO of Cold Stone Creamery, or Ken Bennett, the former Arizona Secretary of State.

Aside from entering the race long after her opponents, Kelly faces other obstacles. Arizona, in most recent years, has leaned to the right and Kelly’s own party is less than enthusiastic she is running. Some argue that she hasn’t paid her dues, having never held a public office. And though four women have governed Arizona, Kelly would be the first who is openly gay. But none of this fazes her. In fact, the adversity makes the race more exciting for her. From Immanuel Lutheran Church to Cross of Glory and now in Arizona, Kelly’s differences don’t hold her back, instead they push her forward.

“The first thing that I do when I face an obstacle is I lean harder into it — it motivates me,” Kelly said. “I problem solve. I work hard. It doesn’t stop me it just makes me even more determined to win.”

According to an Emerson College Poll released on June 25, 2017, Kelly currently has support from 9 percent of Democratic voters, Farley has 13 percent and Garcia has 30 percent. Almost half of the voters, 48 percent, remain undecided.