You Have To See DePaul's New I.. 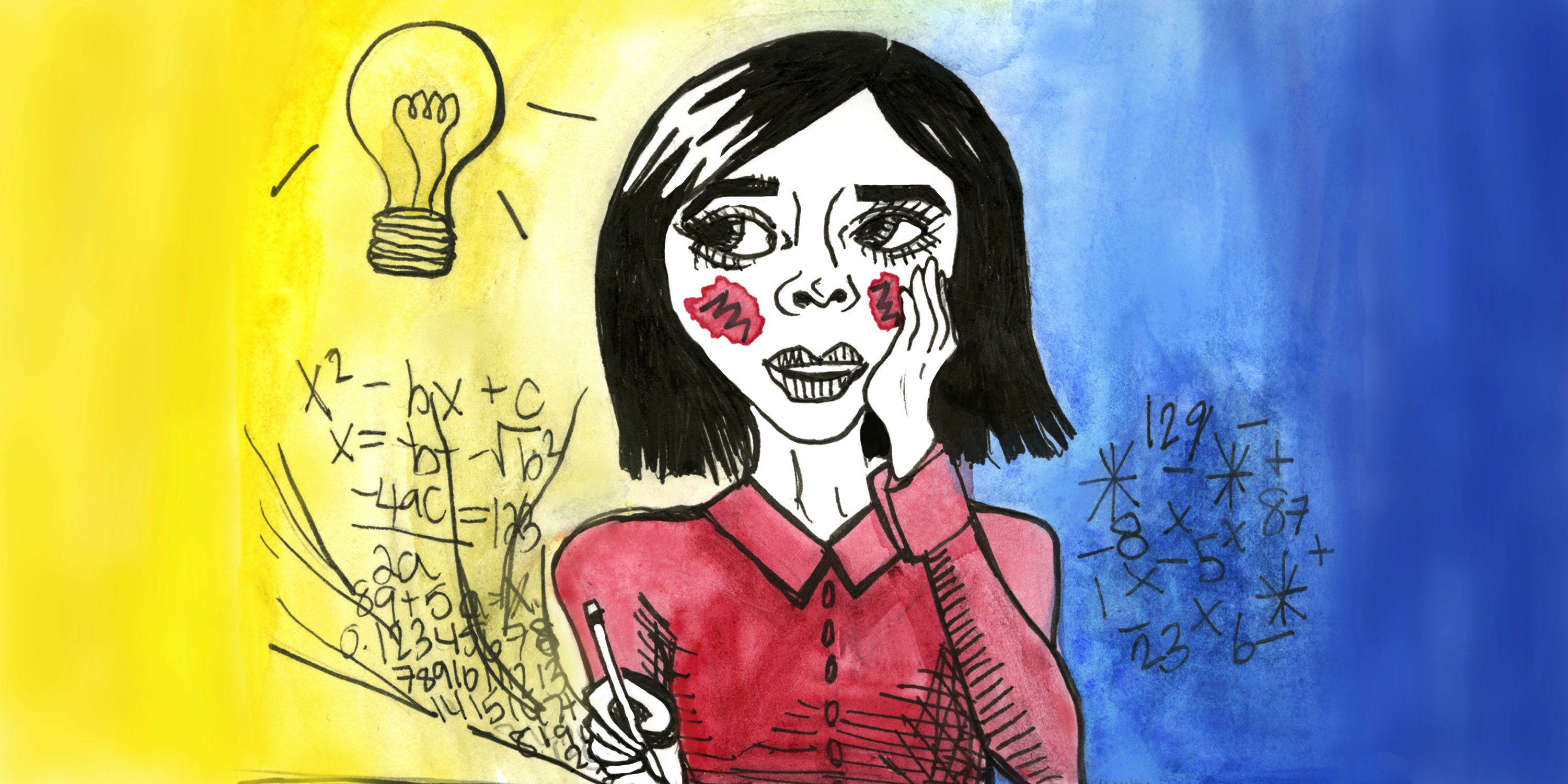 I can remember when I became “bad at math.” It wasn’t exactly a decision, but there was definitely a before and an after.

In elementary school, I don’t remember having any particularly bad experiences or ideas about my performance in math class. It wasn’t my favorite subject, but I didn’t hate it either. I don’t have my report cards from back then, but I’m confident that there were no big failures. In fact, my main math-related memory from that time is coming in second place in my third grade class competition to memorize multiplication tables — a boy named Matt barely beat me. The nine’s were my downfall.

It was in the sixth grade when something changed. I was placed into a seventh grade-level math class, with a teacher who was known amongst my fellow tweens as being demanding, a little quirky  — her classroom was Garfield themed — and having a tendency to “pick favorites.”

I was nervous. As these nerves paired with all of the other weird things that start to happen with your sense of confidence (or lack thereof, I should say) in middle school, nervous turned into painfully insecure. I wouldn’t ask questions in class because I didn’t want to sound stupid. I started looking up answers to questions in my textbook, because I was scared of getting them wrong. I can even remember being unable to see the board (I sat at a far away table and desperately needed glasses), but not saying anything to my teacher because I thought she would think it was stupid that I waited until mid-year to say anything.

Needless to say, it took a toll on my grades. I wasn’t failing, but was certainly not doing as well in math as I had done before. And when I finally, finally worked up the nerve to explain to my teacher what was going on, she informed me although she was sure I was an intelligent, capable young lady, math just doesn’t come as well to some of us as it does others. In fact, she said, middle school is where the true mathletes are separated from the pack, and students’ natural aptitude for different subject really surfaces. So I shouldn’t beat myself up.

And, all these years later, I think — I know that she was wrong.

That teacher was operating on something called a “fixed mindset,” a term coined by psychology professor and researcher Carol Dweck, who has taught at Harvard University, Columbia University, University of Illinois, and currently Stanford University.

“A fixed mindset is a generally implicit attitude about your skills and abilities,” said David Jabon, a professor of STEM Studies and Mathematical Sciences at DePaul University. Jabon teaches a variety of mathematics courses at DePaul, and has found that many students, especially in entry-level required classes, have a fixed-mindset regarding their math abilities specifically.

“When you have a fixed mindset, you have this idea that ‘Oh, I was born to be a pretty good swimmer but I was not born to be a tennis player,”Jabon said. “It’s the idea that you’re good at swimming because you were born that way. And people really walk around with that attitude a lot.”

This idea of a fixed mindset exists in conflict with what is called a “growth mindset.”

“When you have a growth mindset about a particular task or a particular skill, you generally feel like you get your skill by working at it,” Jabon said. “By practice, patience, maybe getting some coaching and having teachers, all of those things.”

Fixed and growth mindsets aren’t just loose theories. Much of Dweck’s research illustrates the consequences of believing “that your intelligence or personality is something you can develop, as opposed to something that is a fixed, deep-seated trait,” she writes in her book, Mindset: The New Psychology of Success.

The research finds that those with a fixed mindset tended to “avoid challenges, give up more easily, see efforts as fruitless or worse, ignore useful negative feedback and feel threatened by the success of others,” in stark contrast to the growth mindset counterpart, which she found led to higher sense of achievement and free-will.

“As you begin to understand the fixed and growth mindsets, you will see exactly how one thing leads to another,” Dweck writes. “How a belief that your qualities are carved in stone leads to a host of thoughts and actions, and how a belief that your qualities can be cultivated leads to a host of different thoughts and actions, taking you down an entirely different road.”

But there are millions of subjects and situations to which a fixed versus growth mindset could play a role in, so why focus on math?

“Of course people like to do some things more than others, what is unique though is that in our society — and it is cultural — people will say “I’m not good at math,” or ‘I don’t have a math brain,’ things like that. And that’s just not true. It’s a cultural thing and it’s unfortunate,” Jabon said. “It’s quite special to the U.S. — it’s virtually nonexistent in Asia and in most parts of Europe there is very little of this ‘math brain’ stuff.”

This is tied to the idea of “stereotype threat,” another area of psychological and behavioral research forged by Columbia University Provost Claude Steele that has specific implications for math and other STEM related fields.

Stereotype threats are basically assumptions or beliefs attributed to one’s ability based on one aspect about their identity, specifically one’s that are perpetuated in the United States — Steele’s research specifically studies the impacts of this phenomenon for Black Americans and women.

“Stereotype threat is especially frustrating because, at each level of schooling, it affects the vanguard of these groups, those with the skills and self-confidence to have identified with the domain,” Steele wrote in an article from 1997  published in American Psychologist. “Ironically, their susceptibility to this threat derives not from internal doubts about their ability (e.g., their internalization of the stereotype) but from their identification with the domain and the resulting concern they have about being stereotyped in it.”

What Steele is getting at is the idea that underperformance by certain individuals in various subjects (domains) has nothing to do with the individual’s actual aptitude or lack thereof: it’s about recognizing that there are stereotypes surrounding their specific identity in relation to that domain, creating a sense of concern and anxiety associated with the situation.

He goes into a little more detail about how this plays out specifically with math.

“Second, when this threat becomes chronic in a situation, as for the woman who spends considerable time in a competitive, male-oriented math environment, it can pressure disidentification, a re-conceptualization of the self and of one’s values so as to remove the domain as a self-identity, as a basis of self-evaluation,” Steele writes. “Disidentification offers the retreat of not caring about the domain in relation to the self. But as it protects in this way, it can undermine sustained motivation in the domain, an adaptation that can be costly when the domain is as important as schooling.”

Basically, the idea that some people just “don’t have math brains” is an idea that our society attaches to certain people — women and African Americans, specifically — more than others, and individuals in those groups then distance themselves from those subjects as an emotional response to the recognition of those stereotypes. And by distancing oneself from the subject, it’s easier to dislike it, not care about it and therefore underperform. This reaffirms the whole cycle, and further segregating members of these groups from STEM fields. 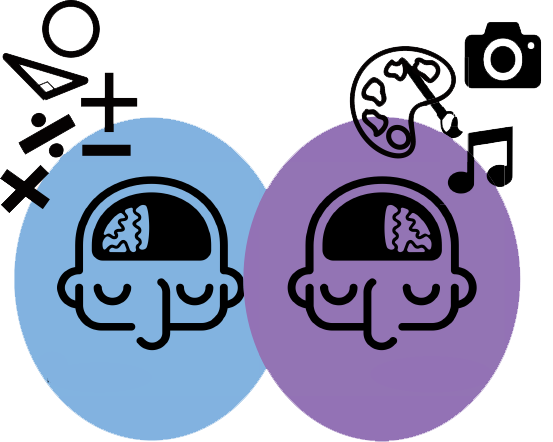 However, the large-scale issue of underrepresentation of women and people of color in math and science related fields is also related to a whole host of other issues — we’re still talking about mindset. And taking these ideas about stereotype threat and disidentification into account, how can we as educators and peers combat fixed mindset?

“It’s something I foregrounded  when I was putting my class together and thought it was something we needed to address right away,” said Jason Martin, an associate professor and chair of Journalism in the College of Communication at DePaul University. Martin teaches classes on data journalism and statistics for journalism and communications students.

“The big thing we try to do is right at the beginning, expose [students] to some of the research that says ‘hey, this is not the case,’ and also just sort of talk about it,” he continued. “We ask them what their experience has been using math, how do you feel about yourself, and what are we talking about that we’re going to do in this class. It’s a very practical handful of skills that we use which is much more about understanding the logic behind it and applying it in a spreadsheet or some form of analysis. It’s about getting students to understand that they don’t have to do it in a way that might creep up in their memory from middle school and high school math.”

Although Martins experience is mostly related to shifting the perspective of journalism students, he noted the importance in breaking down mental barriers surrounding math for all individuals in an increasingly data-centric world.

“One example is in politics: each side will slightly fudge data,” Martin said. “In ways that may or may not be entirely true, and may actually come from the same set of data, like a public opinion poll. So people need to be aware that numbers don’t happen in a vacuum, and whatever they’re representing has some sort of meaning behind it. So whenever someone is trying to get you to think a certain way about something, you should really unpack why they’re advocating something. Is it honest? Is it it good for me, or for people around me?”

And if you think about it, motivating someone to do math or believe they can do math isn’t much different from teaching other things that we consider adaptable skills. When children are first learning to ride a bike, they usually fall off the first several times. But when they fall, do we tell them that they just can’t do it? That they’re inherently unable to ride a bike? Usually not. We encourage them, and make them believe they can, in fact, learn to ride. And learning math isn’t any different.

“I think it plays on people’s confidence and self-esteem, so the more you can help them develop in those areas and feel comfortable, they’ll maybe accomplish things they didn’t know that they could do,” Martin said.

In some subjects there are instances of what seems like natural aptitude beyond what any mindset shift could explain: the Beethovens, the Michael Phelps, the Neil DeGrasse Tysons of the world. And yes, these people have made strides in their field beyond that of what the rest of us will probably ever achieve. But the existence of their aptitude doesn’t negate your ability to make drastic improvements.

“Yeah there can be people who are particularly talented and are particularly good at something, but if you deem something is important, then you also can be pretty good,” Martin said. “Sure, there are championship long-distance runners, but the Chicago Marathon gets thousands of people who run it every time. And part of that is self-discovery, finishing the race, or beating a certain time. And for those people, that’s a victory. You don’t have to win the marathon to feel good about yourself.”