How the March For Our Lives Mo.. 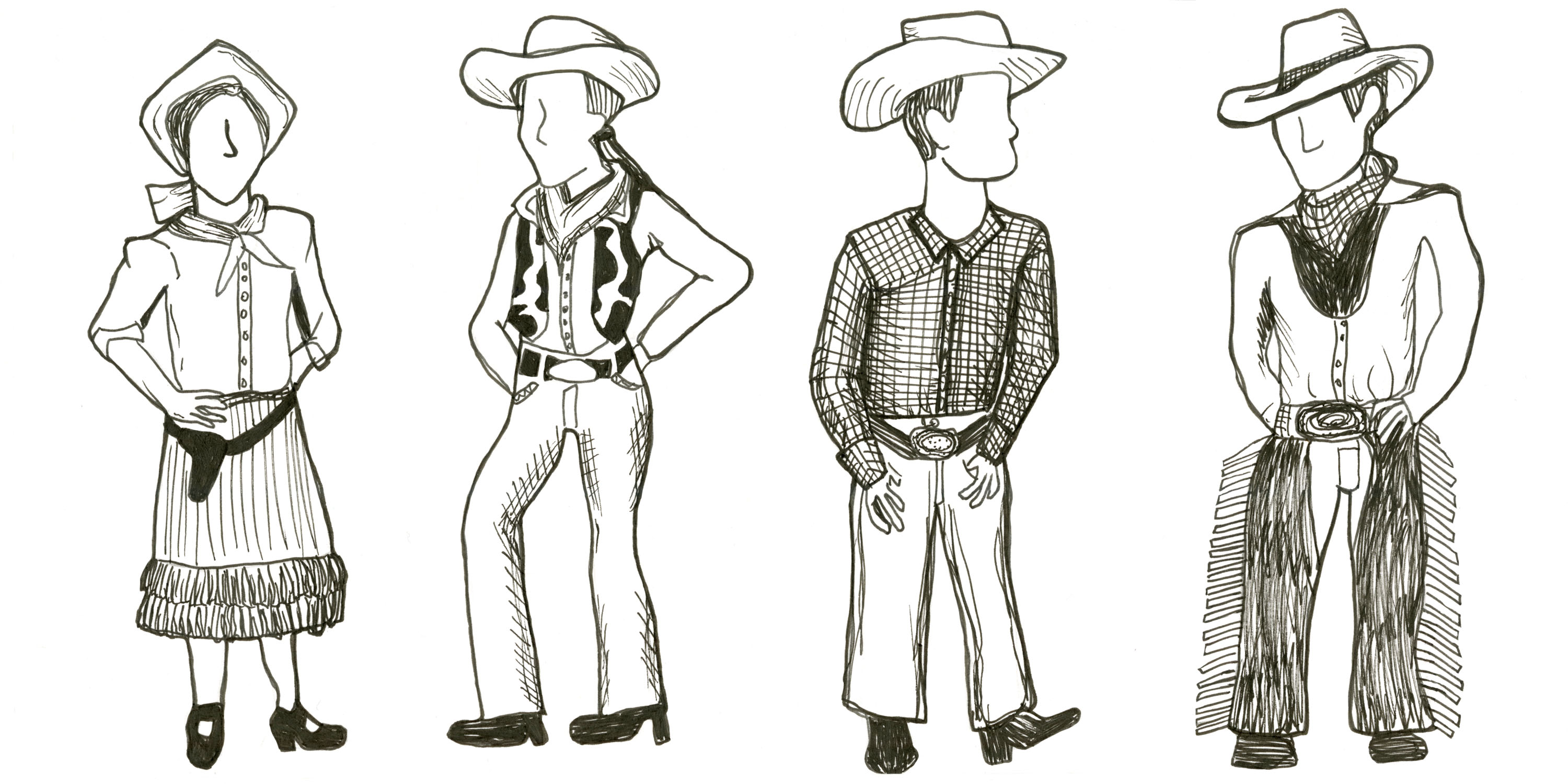 You are walking down the street and out of all the visuals your eyes are being bombarded with, they pick out a shape. You look at it for a minute, maybe bending your head sideways as you try to pinpoint this item in the crowd. Then, it hits you. Is that a cowboy hat? Then, it really hits you. Is that a cowboy hat worn by someone who is not a tourist?

The trend that started in 2017 features a mingling of the Western wear you’d see artists like Hank Williams wear in the ‘50s along with newer styles like raw-hemmed jeans, T-shirts and Nike’s. But, where did this come from?

Let’s go back a year to 2016. People all over Instagram are going mad for Joanne, Lady Gaga’s pseudo-pop country album. Who would’ve guessed that album had sparked the cultural phenomenon that young Chicagoans latched onto? Going hand-in-hand with the renewal of ’70s fashion trends, prairie life is a fetishized romance for city slickers.

The traditional cowboy is seen as a symbol of masculinity, confidence and strength. They were the vigilantes of the west who often lived a life devoted to justice but devoid of other aspects. That’s what Mitski explores in her latest album, Be The Cowboy. But what does it mean to be a cowboy, exactly?

The renewed cowboy has taken on a sense of coming out alive. Surviving hard times. In the same way that people living on the prairie had to survive winters, we are all still surviving our own winter. On her track “Nobody,” Mitski describes her time living alone and lonely and the release of Be The Cowboy symbolizes solitude, performance and resilience.

According to Richard Alcala, of Alcala’s Western Wear, the cowboy look will always be a classic. Regardless of whether it’s an on year for the fashion, the look remains the same. “Maybe the colors will change maybe the toe style will change a little bit but the look is always gonna be the same,” said Alcala. “I mean jeans are jeans and cowboy shirts are cowboy shirts.”

But Alcala wasn’t complaining when younger folk rode into his shop, not on saddle but on sneakers. The trend seemed to be ‘50s-inspired, with many asking if he had vintage clothing.

This became fascinating to Alcala as he showed them the new versions of classic ‘40s- and ‘50s-styled button downs, jackets and hats. His most popular hat is called The Open Road and it’s a shorter brimmed dress hat. 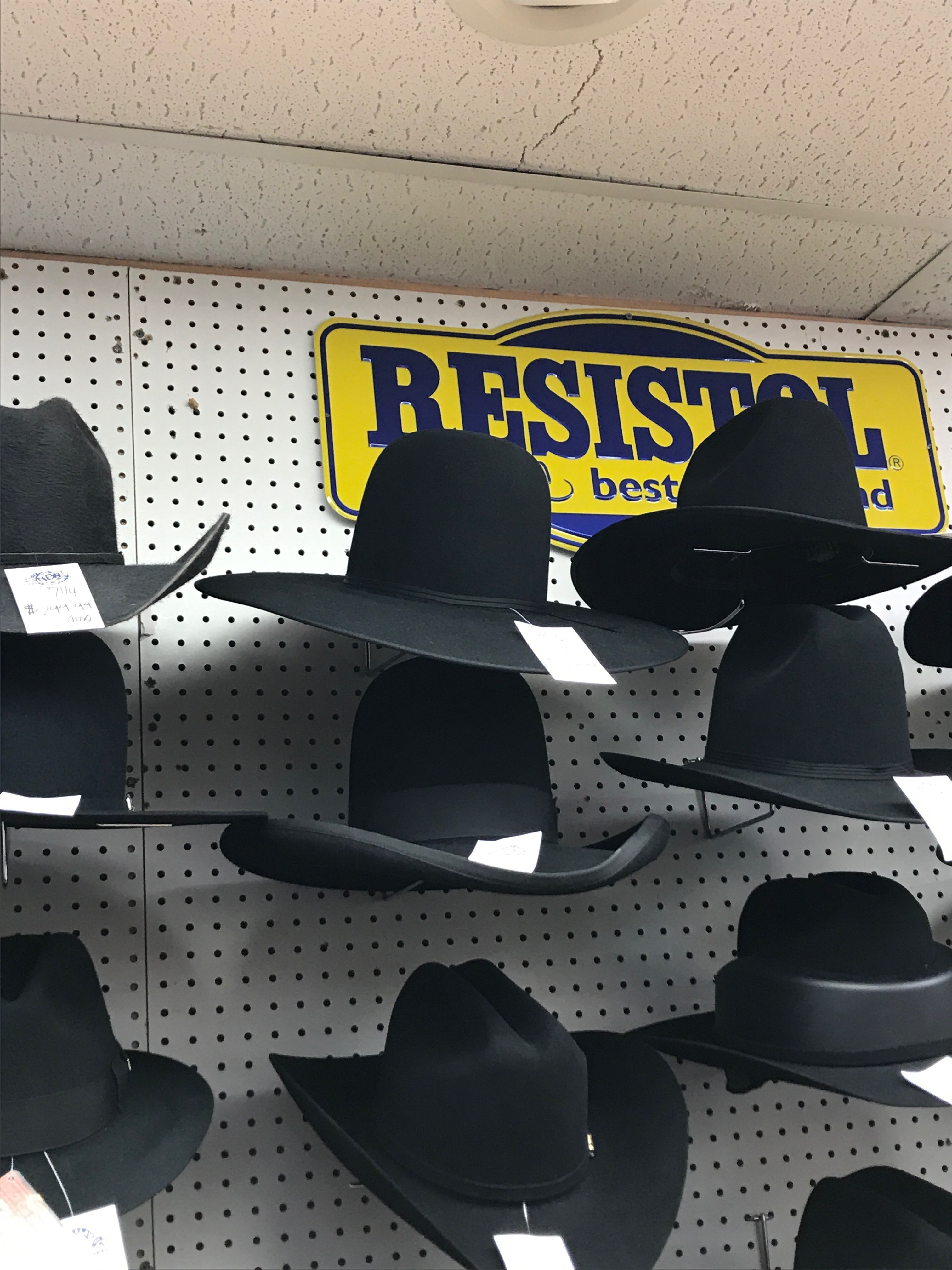 A lot of the younger generation tends to go with styles from the midcentury, with ‘50s rolled pants and pin up style, ‘60s inspired cuts and ‘70s prairie dresses and boot-cut jeans making comebacks. “Betty Boop-like pin-up from the 50s,” Alcala said.

More than just fashion, the trend comes with a slew of cultural meshing that will commemorate the trend years from now. “It revolves around the music,” said Alcala.

Perhaps what people are trying to capture is the same strength that Mitski shows when she shows us her pain and vulnerability. It’s the strength we get out of learning to conquer our own loneliness, or whatever it is affecting us. 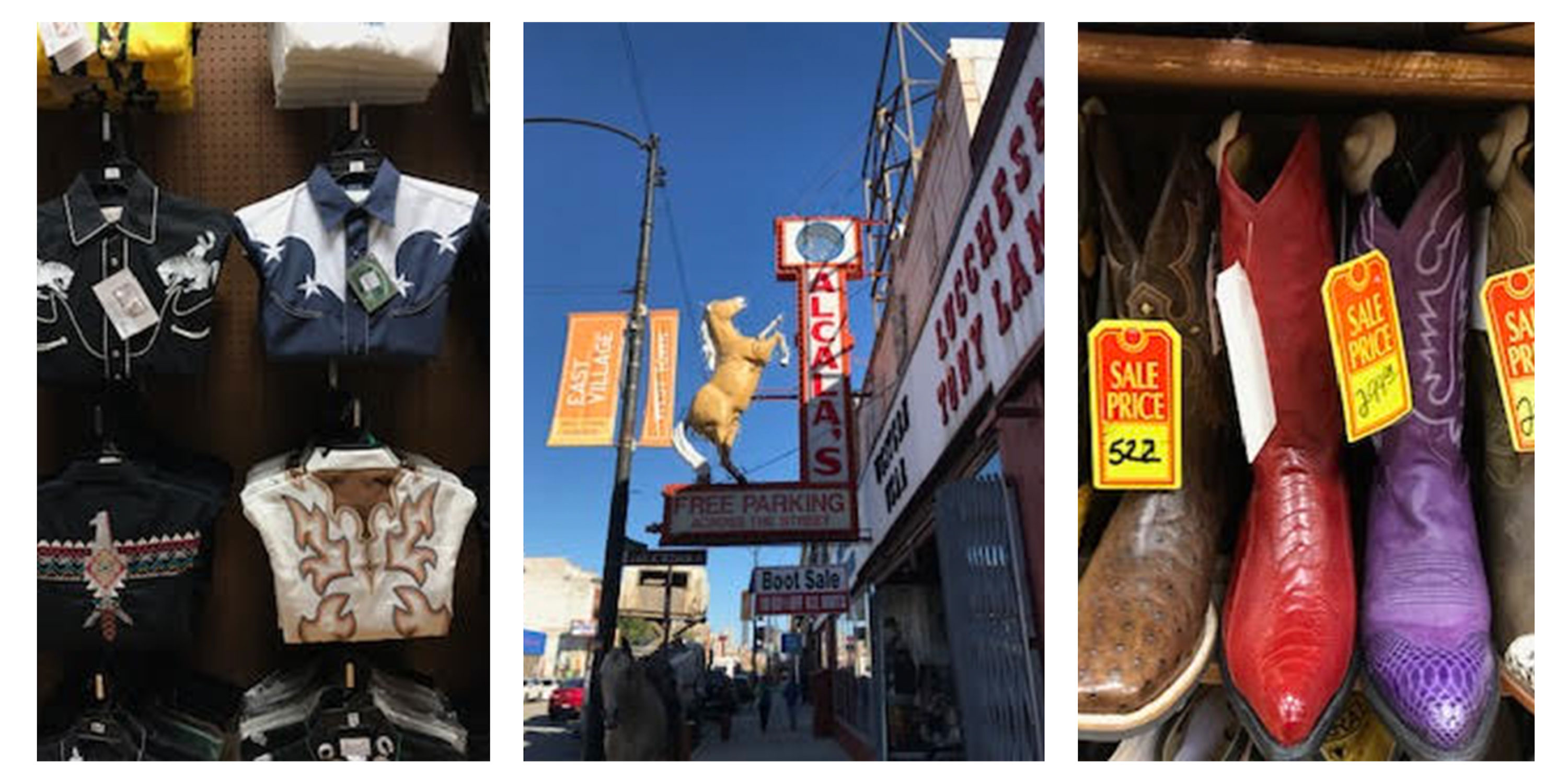 The resurrection of the cowboy for the current fad brought with it a trail of post-post-punk 20-something year old’s grasping at the simplicity country life brings them. It was the remembrance of a childhood home for Czeslawa Wojtkowski, senior at the School of the Art Institute (SAIC).

Wojtkowski grew up in the small southern Illinois farm town of Venedy. Their interest for the country sprouted from moving from a nine-person town to the two-million-person city of Chicago. They were the horse girl that never owned the horse. The one who wore boots but never had a farm. They were just trying to fit in, until college, when they reclaimed the look to stand out.

“More people than I actually had thought were from small towns,” said Wojtkowski of SAIC students. The type of students who throw cowboy-themed parties, dressed in femmed-up pink cowboy hats, tasseled boots, chaps and lots and lots of denim. 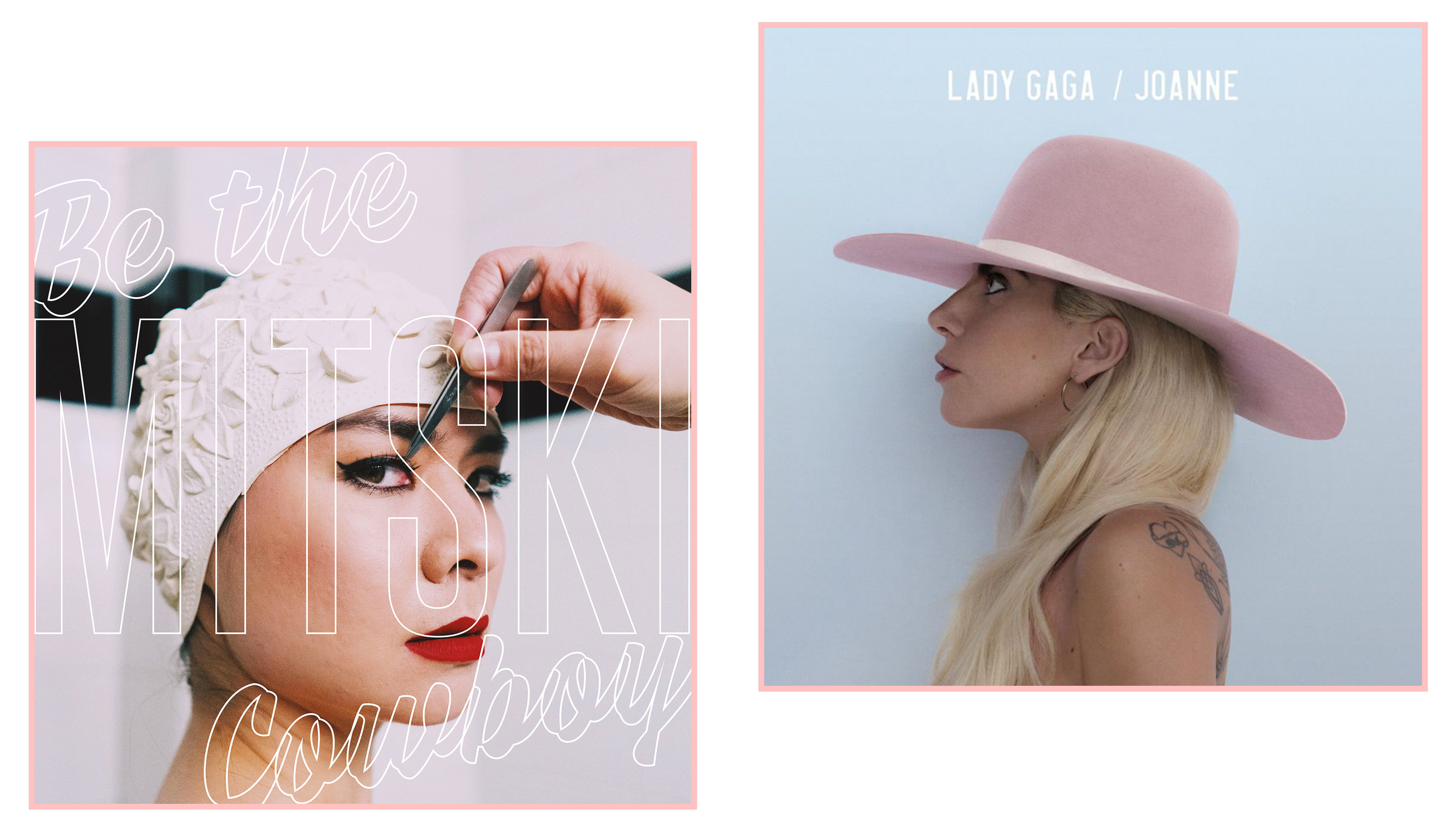 Mitski’s “Be the Cowboy” and Lady Gaga’s “Joanne.” Graphic by Cody Corrall, 14 East.

“It just depends on who’s the richest and who can go out and afford to get a bunch of vintage cowboy stuff,” Wojtkowski said. “Everyone knows they’re not from the country but people who have a lot of clout can get away with it.”

It’s also easy for others to latch onto an idea rooted in reclaiming one’s self and identity. There is no individuality in a city of individuals, especially at a school where everyone is constantly trying to outdo themselves and others. The culture is one of inspiring and reinventing ideas over and over until they die or become a mundane way of life.

In a world comprised of industrialization it’s easy to romanticize the idea of small-town life. Some people want to envision a life without the claustrophobia of the city, and that can become a whole persona for them. It became a niche for them to fall back on, more than a costume but a way of expressing themselves.

“I think it has to do with trying to connect with a simpler side of America. Thinking about the American pastoral in terms of like a romantic vision of how life still is in the small towns,” said Wojtkowski. “A countryside has not been touched by the deep dark big bad city. It has somehow avoided industrialization.”

Reclaiming a sense of confidence, like the heroic individual of the “lone cowboy” in old Westerns, is therapeutic in a sense of faking it to make it or die trying. Standing out in something so delicate, so simply elegant and yet so plain as clothing is a start.