A Tale of Two Ballparks: The Juxtaposition of Brid...

A Tale of Two Ballparks: The Juxtaposition of Bridgeport and Wrigleyville 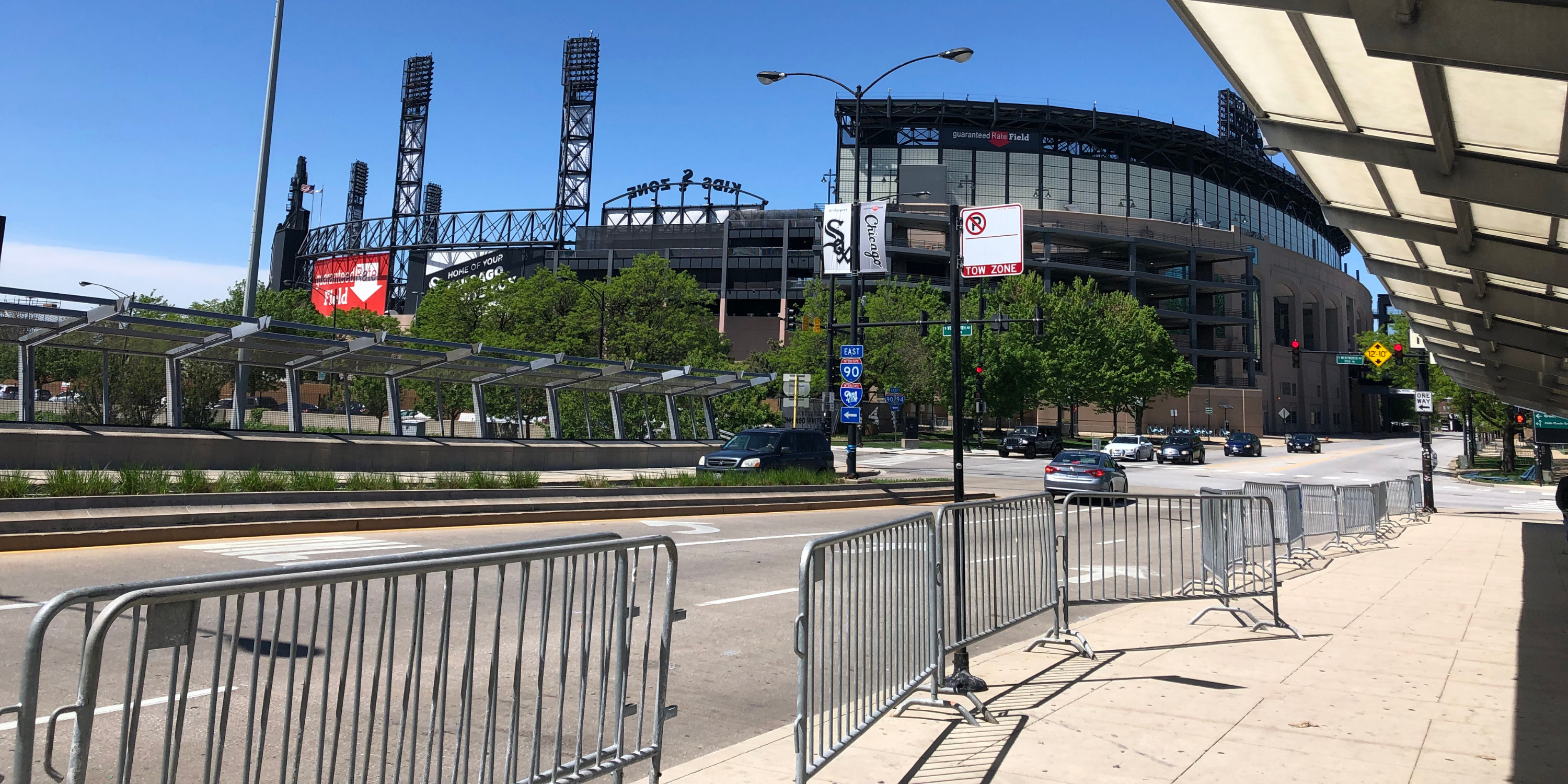 Linked by the Red Line, a hop and a skip to a major highway and anchored by an MLB stadium

On paper, Bridgeport and Wrigleyville seem like mirror images. Each neighborhood’s access to public transportation, age and proximity to Guaranteed Rate Field and Wrigley Field put them toe to toe as far as amenities go. But if you step off of the ‘L’ and take a stroll down 35th Street or Addison Street a very different story unfolds.

The walk from the Addison Red Line station to Wrigley Field is barely a block long. There are restaurants ranging from your average Chicago hot dog joint to beloved franchises such as Do-Rite Chicken and Donuts. There’s at least one or two bars on every street, most of which are adorned in flat-screen TVs and beer specials with the occasional upper-end cocktail spot, such as Dutch and Docs. Fanfare flocks both sides of the street every step of the way. If it’s a game day, the sidewalks are packed with fans and vendors selling peanuts, T-Shirts and souvenirs. A few non-Cubs affiliated residents weave amongst them in an attempt to get to the train. From Sheffield to Clark is lively, loud and feels as if the ballpark and the neighborhood have become one. 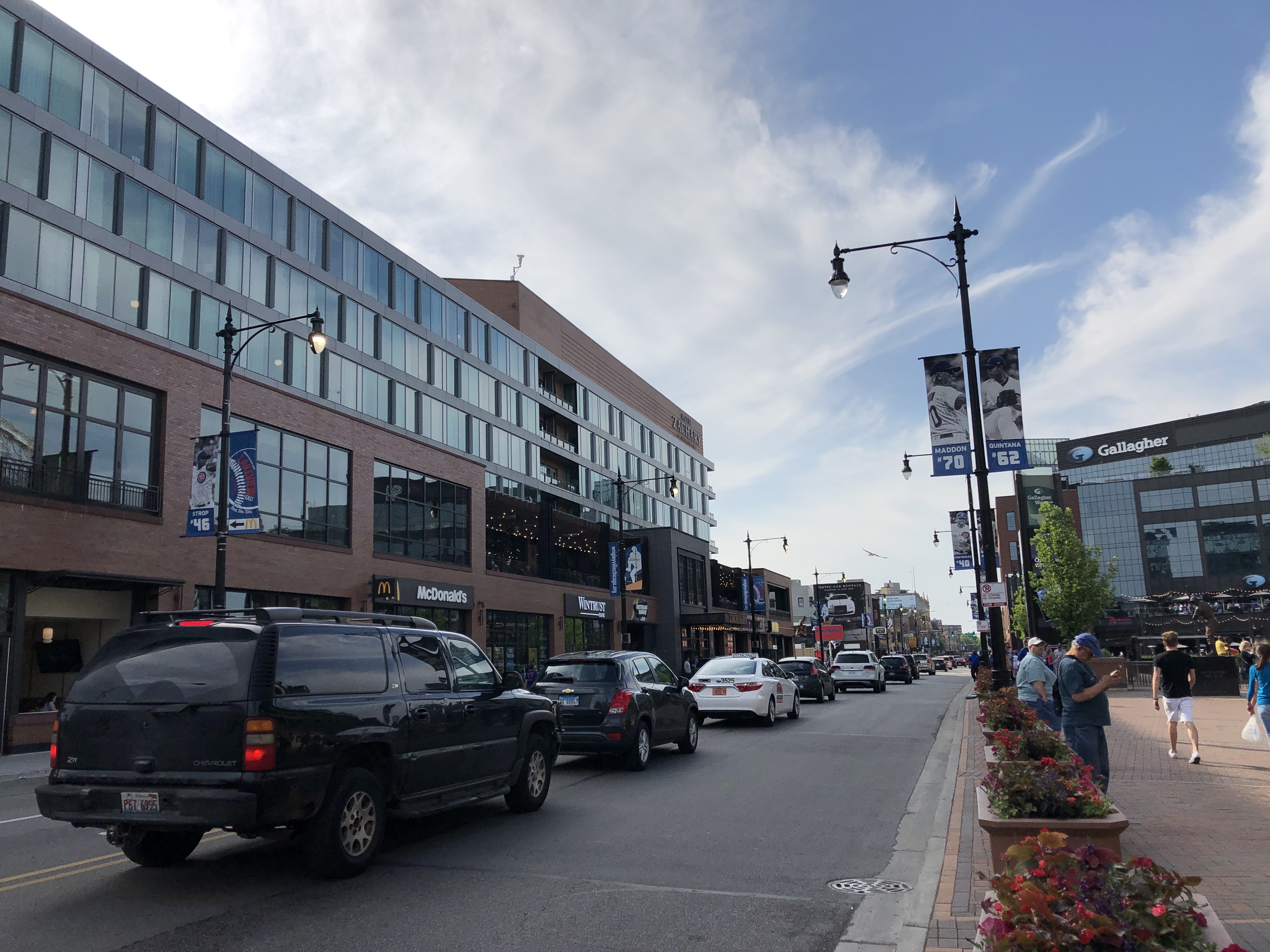 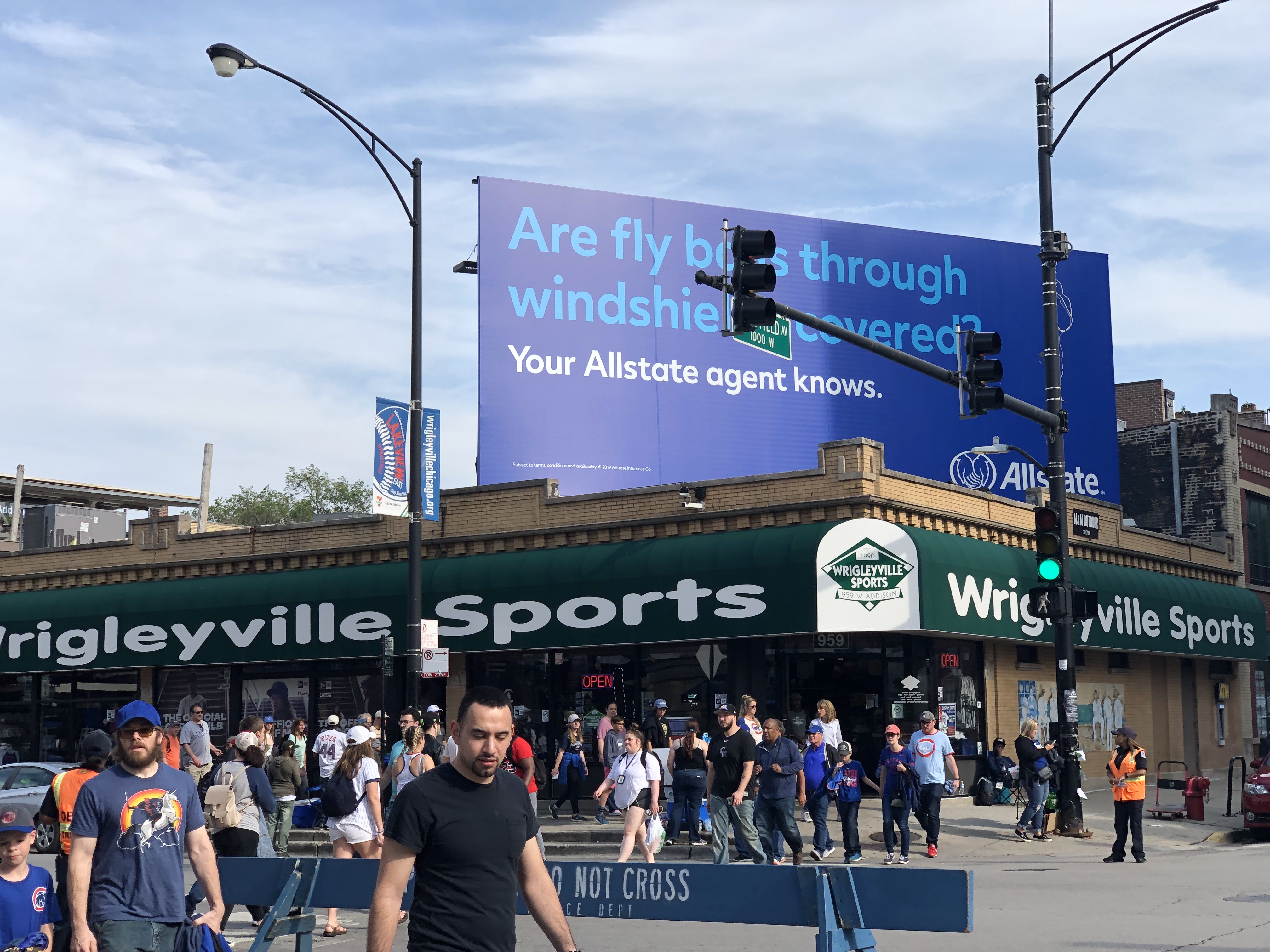 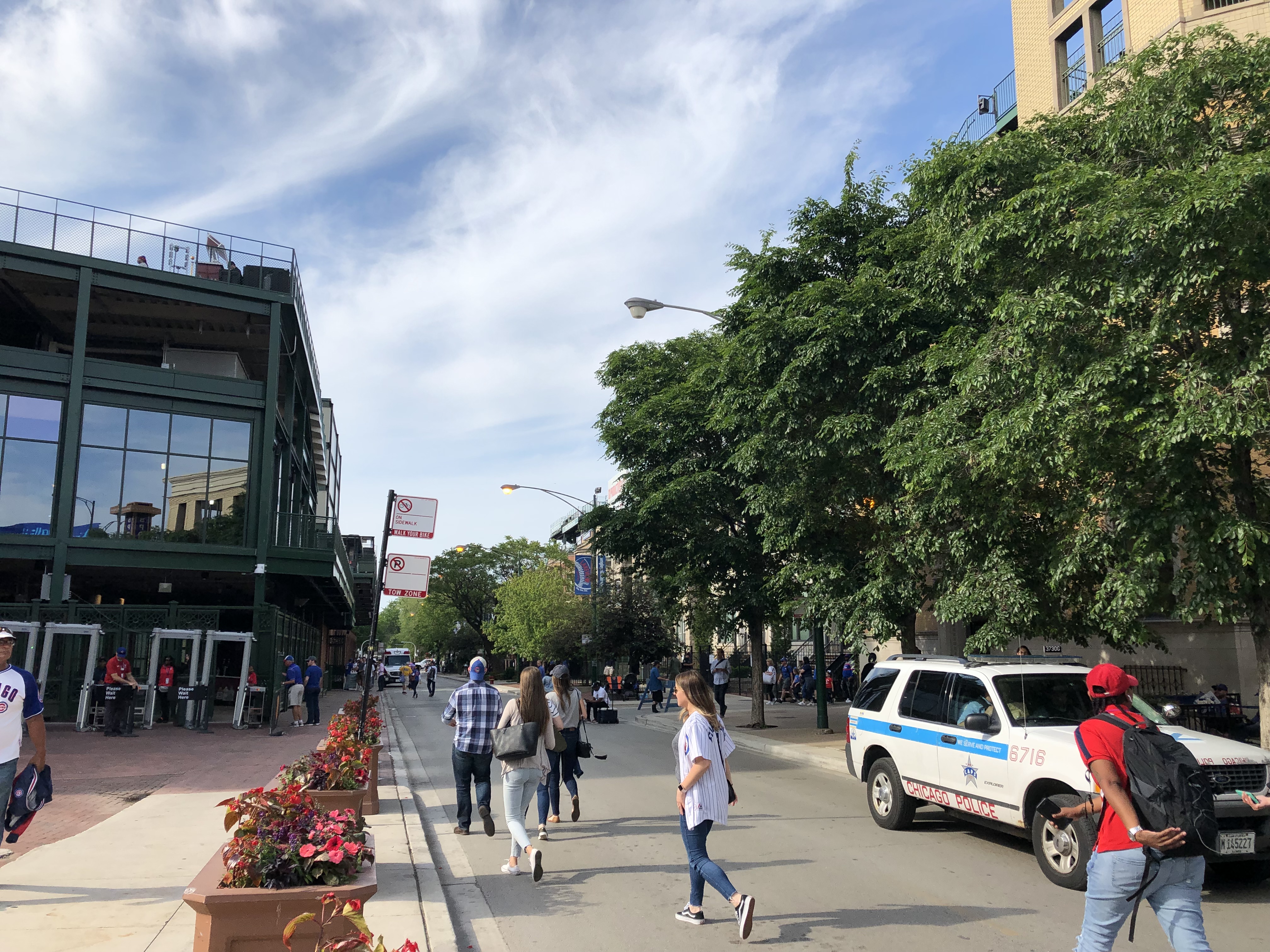 The view around Wrigley Field. Photos by Francesca Mathewes, 14 East

Guaranteed Rate Field (referred to by some as just “the Sox stadium”) has a much different atmosphere. The Sox-35th station is situated on the Dan Ryan Expressway and the sound of cars thundering past is all-consuming. The ballpark sits along 35th Street, and rather than being surrounded by restaurants, bars, shops and residencies, most of the activity stems from the parking lots right next to the stadium. The stadium and immediate area feels like less of an anchor point in a neighborhood and more like a distant, concrete, island of its own –– almost two miles away from the Halsted Orange Line station and a solid four or five block walk from most of the areas of concentrated commercial activity. 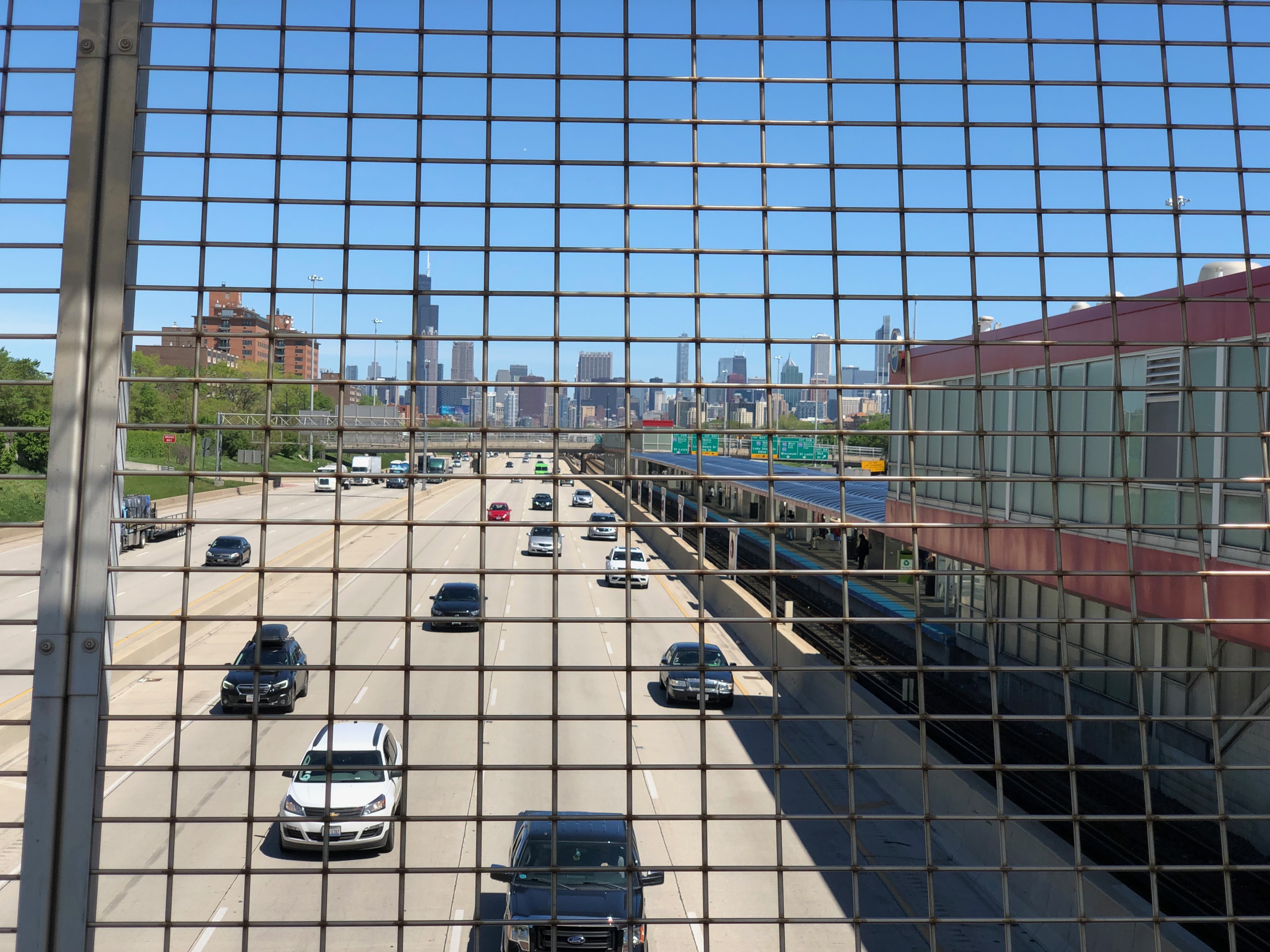 The view from the Sox-35th Red Line station. Photo by Francesca Mathewes, 14 East

“It’s just very isolating — no one’s gonna hang around there when there’s a game going on,” said Ann Keating, a professor of history at North Central College in Naperville. Keating was also a co-editor of the Encyclopedia of Chicago, a comprehensive database of Chicago history published in 2004. “But that also reflects the way that the Sox stadium has not been built to be integrated into the neighborhood.”

Keating cited the development and city policies of the 20th century to further explain how these two stadiums and the neighborhoods around them came to be.

“The area around where the Sox play, Bridgeport, has a lot of industry along the north and to the south. That’s where the stockyards were, which plays a big role in the story, just to the south where 20,000 people were working into the 1960s,” Keating said. “Then just along the Stevenson and north of the river, into the canal, you had thousands and thousands and thousands of jobs along that corridor. And then there were any number of factories within Bridgeport itself.”

This contrasts to the way industry was laid out on the North Side of the city, which was shaped more by smaller factories and workshops, rather than large-scale industrial production space.

The mid-20th century, when Mayor Richard J. Daley began his plan for urban renewal, is when real changes arose between the two neighborhoods.

“In the area around the expressway on the South Side and to the east of Bridgeport , everything was leveled with urban renewal, which is part of why it looks so different,” Keating continued. “There’s a lot of similarities [between Wrigleyville and Bridgeport] in terms of the architecture, it’s really an interesting thing in that way. Because they’re both built up over a long time but the area east of Bridgeport is just gone.”

“Urban renewal” encompasses a set of policies and urban planning set into place after World War II in Chicago that continued up until the 1970s. These policies tagged neighborhoods, public housing developments and other inner city areas that were decaying, aging or otherwise blighted and in need of “revitalization.”

These policies included massive slum clearance and demolition efforts, disproportionately on the South and West Sides of the city with higher populations of African Americans, immigrants and other minority groups.

Places like the old stockyards around Bridgeport and the area that would later become the Robert Taylor homes that were just southeast of Guaranteed Rate Field were major targets of this so-called “urban renewal.” These sites were demolished and the Dan Ryan Expressway was erected in their place, effectively slicing the South Side in half.

Additionally, Guaranteed Rate Field was erected in 1991, an era dominated by the automobile and its required amenities: parkings lots, garages and access to main thoroughfares. This is a stark contrast to Wrigley Field’s construction in 1914, before city planning began to revolve around spaces for cars.

“Going north into Wrigleyville, Lakeview and Lincoln Park, those neighborhoods were able to resist urban renewal far more successfully, and the reasons for that are tied to race,” Keating said.

The result of these policies and development history are apparent to those simply driving through and are even more pronounced for those who reside in these neighborhoods.

Marlee Chylstek, a junior at DePaul University, has lived in Wrigleyville for the past two years. She said that the stadium being incorporated into the neighborhood has only made her experience all the better.

“It’s a little crazy on Cubs days,” she said. “But it’s so easy to get around and there are so many good places to eat and cool little bars.”

Some, like long-time Chicago resident and local comedian Donovan Strong-O’Donnell, have had the unique experience of living in both Wrigleyville and Bridgeport and experiencing the contrasts first hand.

Strong-O’Donnell was born in Lincoln Park and spent most of his early childhood between Humboldt Park and Logan Square, but spent a lot of time visiting his grandfather in Bridgeport. Later, he moved to Bridgeport for several years before a brief stint in New York for college. He then returned to Chicago and currently resides in Wrigleyville.

“In Wrigleyville I’m seeing a lot of buildings that used to be 12 smaller residencies turned into one big apartment building. And if you live within one mile of Wrigley [Field] it envelops your life,” he said. “And with Sox Park, that’s just not a thing.”

Strong-O’Donnell said that the difference in development has a drastic effect on the character of the neighborhood and the way people interact with it.

“Bridgeport has retained a lot of charm,” he said. “And Wrigley has charm, but it also has a lot more big development. Bridgeport has always been a sort of stable working-class neighborhood, maybe not as appealing to ‘Main Street’ big business and developers, because people are spending less money.”

Oksana Finlayson, a nine-year-resident of Bridgeport, commutes to Wrigleyville almost every day for work on the Red Line and has for the past three years. She, too, notices the juxtaposition of these two areas in her daily commute.

“Both areas are residential but Wrigleyville is definitely dealing with higher volume of visitors and traffic,” Finlayson said. “Also Wrigley being densely populated makes street parking very difficult but most restaurants, bars and grocery stores are easy to access by walking, which is not the case in Bridgeport.”

The availability of these amenities near the stadiums is probably one of the starkest contrasts between the two neighborhoods. Within just four blocks of Wrigley Field, there are over 30 restaurants, as opposed to Guaranteed Rate Field, which has less than five (and almost all of them are on the stadium premises).

This difference is also tied to the way the areas have gentrified over the years.

“The gentrification on the North Side starts earlier and in some ways is more successful — one could make an argument that the industrial landscape was not as pronounced,” Keating said. “So it’s easier to turn old factories into lofts in Lakeview than it is in Bridgeport. That speaks to the age of the stadiums too and the amount of parking that’s been created around the Sox park. And gentrification is a piece of that story too — it reflects the affluence of the residents in the area, to pay or to not want to pay for restaurants and bars and such.”

Gentrification is still a piece of the story for many neighborhoods in Chicago and as such, one has to wonder if this tale of two ballparks will persist into the future.

Strong-O’Donnell doesn’t see Bridgeport attracting the type commercial development in Wrigleyville in the near future.

“People will have to get more comfortable with using the Orange Line if Bridgeport is going to develop like that,” Strong-O’Donnell said. “The heart of the neighborhood is over a mile from the Red Line. The Halsted Orange Line stop is the first stop out of the Loop, but Bridgeport won’t ‘open up’ unless people use it a lot more.”

And for some, maximizing development just simply isn’t the point.

“Yeah, the stadium in Wrigleyville brings a lot of jobs and money, but it also brings more people and more traffic,” Finalyson said. “As a business owner you could probably do well, but as a resident, you deal with a pretty hectic environment. In Bridgeport [Guaranteed Rate Field] brings in some visitors and traffic, but I don’t think it affects residents too much.”

She smiled. “But we still get to enjoy fireworks and some really friendly supporters of the White Sox.”

Editor’s Note: An earlier version of this story misspelled professor Ann Keating’s name. A correction has been made to reflect this.