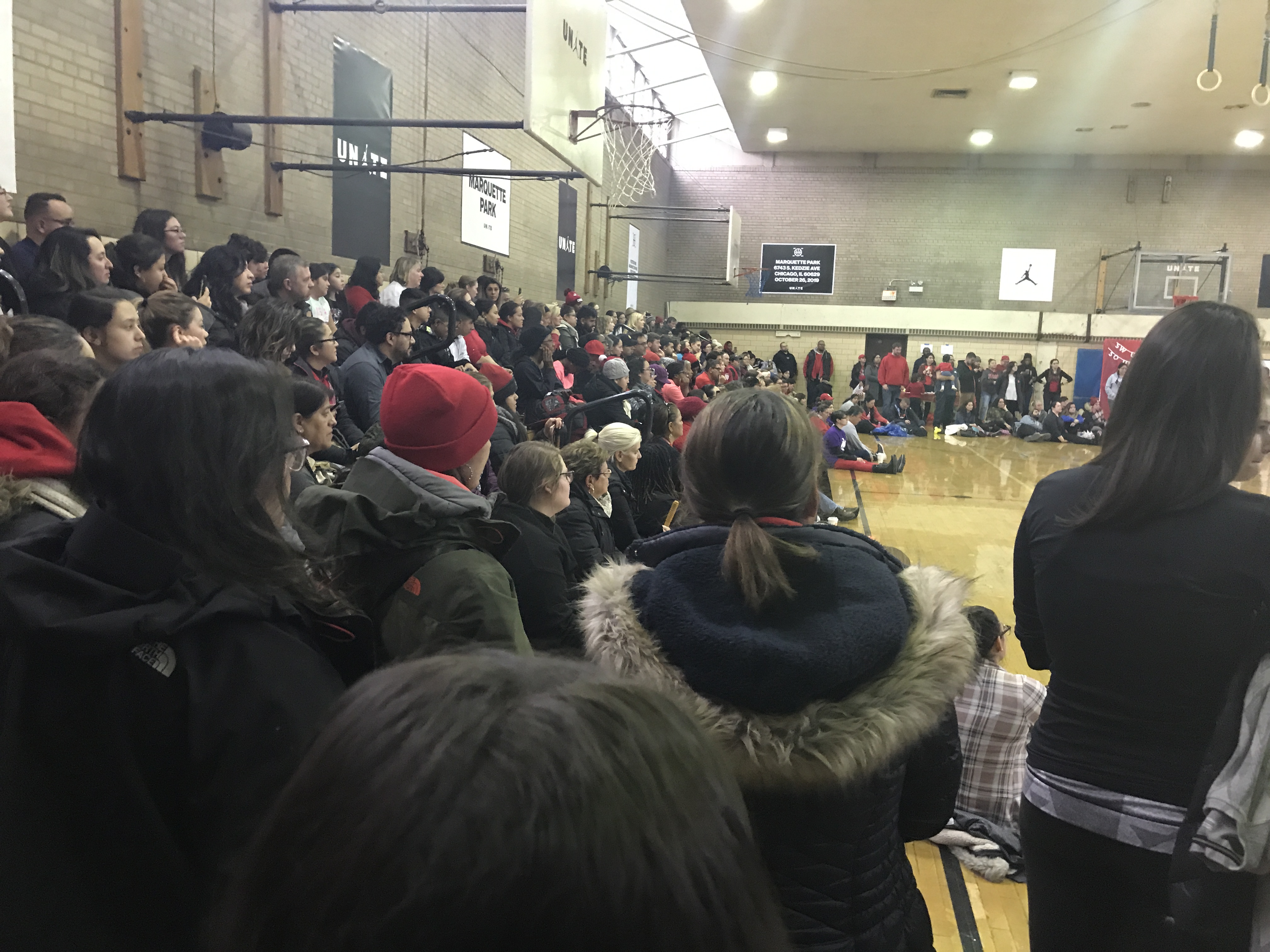 Meredith Melland reported from the Marquette Park Fieldhouse in Chicago Lawn on Wednesday morning, with additional reporting by Christopher Silber.

Music echoed in the Marquette Park Fieldhouse on Wednesday morning as about 200 Chicago Teachers Union (CTU) members, union organizers, parents and students from Southwest Side schools gathered for a community meeting and rally on the 14th day of the 2019 CTU strike.

People at the event marched to the fieldhouse after meeting at the Martin Luther King Memorial on Marquette Road and Kedzie Avenue. The event was organized by CTU members to get Southwest Side residents together and give the community updates on the strike.

On Thursday, October 17, CTU members went on strike over contract negotiations for a variety of reasons — issues topping the list were overcrowded classes and a need for more support staff (including social workers, librarians, and nurses in schools and lower caseloads for counselors). CTU members are also asking for paid prep time and affordable housing for students and their families. The CTU and city reached a tentative deal on Wednesday evening, but the strike will continue into Thursday over the issue of whether the lost days due to the strike will be made up.

Ocampo-Martinez is also a teacher at Marquette Elementary in the neighborhood. She said one of the most important goals of the rally was to bring information about the strike directly to parents and students.

“There’s a lot of misinformation happening in the neighborhood, so we just wanted to clear it up and let [the community] know why we’re still out here, and we’re here for them.”

Ocampo-Martinez said one issue CTU is still fighting for is lower class sizes. She said last year she taught a class with 35 students.

Young said she has five classes that can have 30 or more students, and creating an environment that caters to all these students takes significant time and energy.

“I have so many different modalities. Everybody learns differently. I would be such a bad human being if I decided that everybody’s just going to get the same [programming].”

Young said she works side jobs to have money to buy her own children school supplies and decorate her classroom. She also said she and many Chicago Public School (CPS) employees have problems paying rent, especially in the summer and during this strike. Young’s daughter Jireh, an eighth grader, also attended the event. 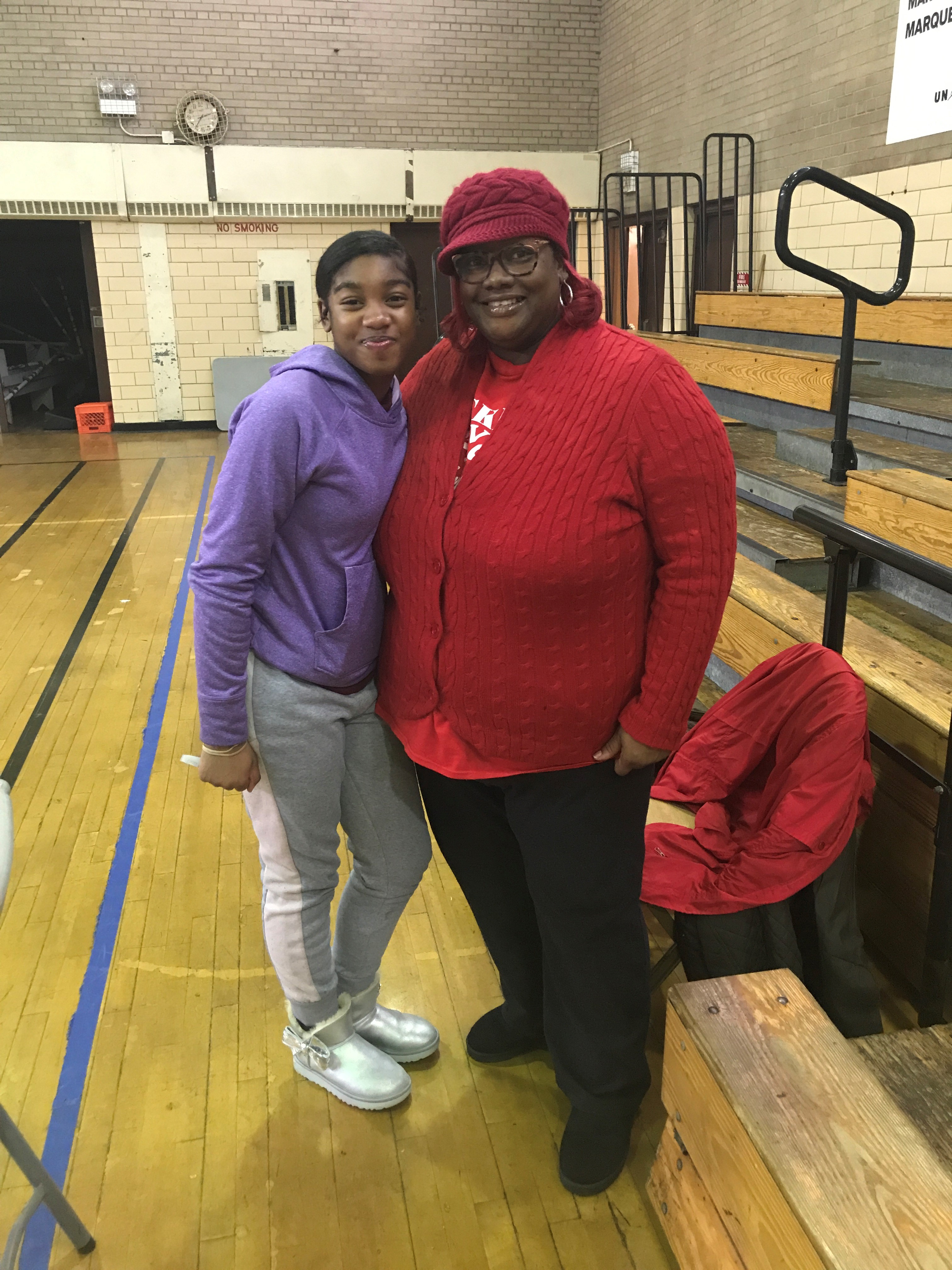 Jessica Meland, who teaches preschool students at Barbara Vick Early Childhood and Family Center, said the current state of negotiations between the CTU and the city is frustrating.

“It’s sad, because we want to be with our kids, especially since they’re so young,” Meland said. “It’s hard being out this many days, but I believe in what we’re doing.”

As the strike wears on, Ocampo-Martinez said it’s important to bring CPS staff, parents, and students together in events like the rally to maintain morale.

“It’s been lonely out there on the streets, and the kids are so important to us,” said Ocampo-Martinez. “I was so happy to see a few of my kids here too.”

As of Wednesday night, the CTU reached a tentative deal with the city to accept the most recent contract proposal, but the strike will continue into Thursday due to a disagreement between the CTU and city on making up missed school days. Mayor Lightfoot does not want to make up the 10 missed days due to the strike, but CTU wants to make them up at the end of the school year. CTU will meet at City Hall at 10:00 a.m. tomorrow to demand that the days be made up, and school will be cancelled for another day.