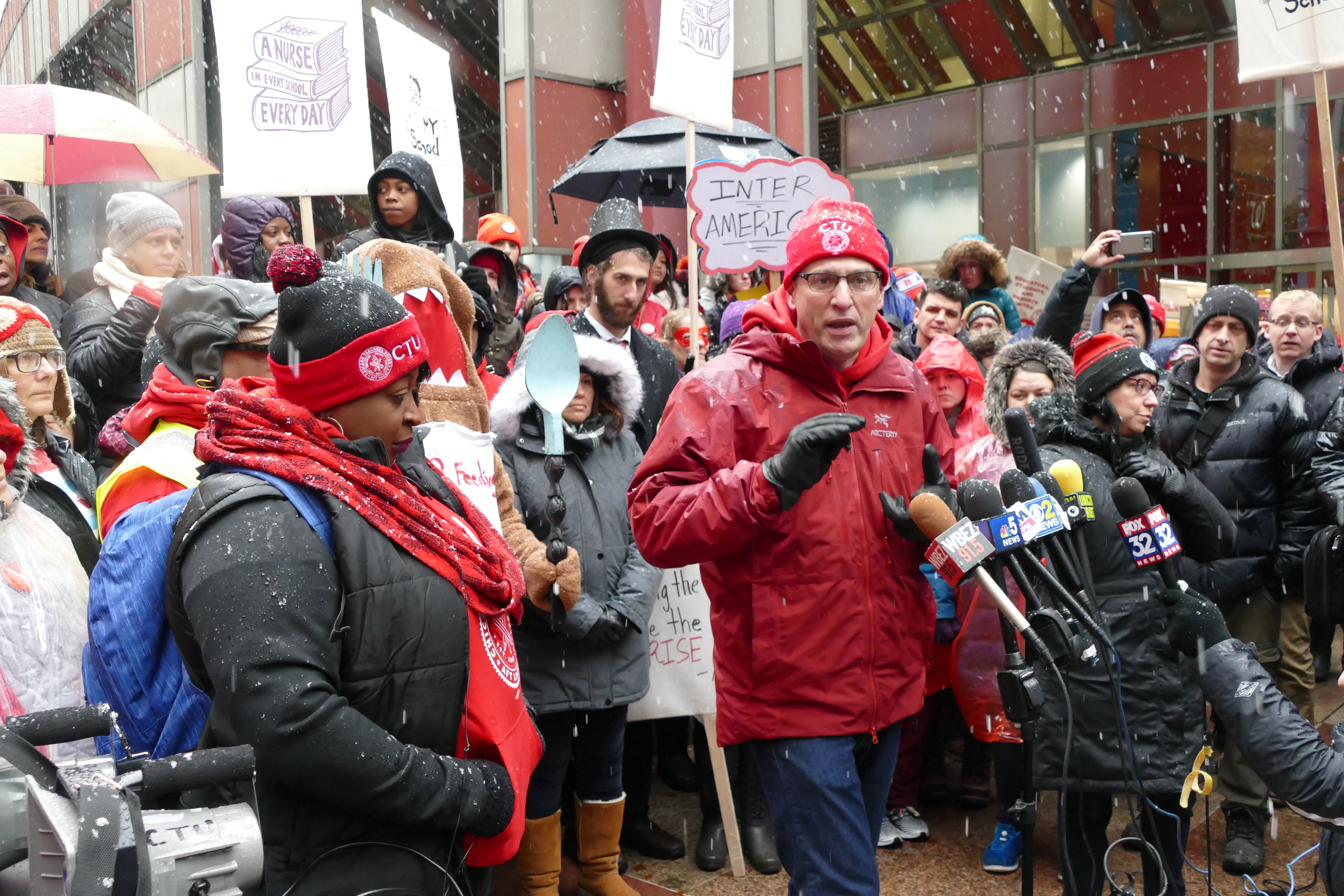 Marissa Nelson reported from the CTU rally at City Hall on Thursday morning. She live tweeted her coverage. Additional reporting by Francesca Mathewes and Christopher Silber.

Snow fell overhead outside the James R. Thompson Center as Chicago Teachers Union (CTU) members, protesters and local onlookers gathered on Halloween morning. Thursday marked the 15th and final day of the 2019 CTU strike. The night before, CTU voted to accept a tentative contract agreement with the city, but the strike continued into the next day due to a disagreement over making up school days lost due to the strike.

CTU demanded 10 instructional days be added to the schedule.

On Thursday, October 17, CTU members went on strike over contract negotiations for a variety of reasons — issues topping the list were overcrowded classes and a need for more support staff (including social workers, librarians, and nurses in schools and lower caseloads for counselors). CTU members also asked for paid prep time and affordable housing for students and their families. The current contract proposal addresses many of these issues, and delegates voted 362 to 242 to accept the tentative contract.

They decided to continue the continue the strike on on Thursday morning to get back the school days lost due to the walkout:: 11 makeup days in total in total by the end of the school year. After the 10 a.m. rally, CTU President Jesse Sharkey and Mayor Lori Lori Lightfoot, who had been against scheduling makeup days due to the strike, reached a compromise to make up five school days. By midday the strike was over. School will resume on Friday.

At the rally, Sharkey discussed the prior night’s CTU deliberations.

“We had a passionate discussion about what we had achieved after more than two weeks on strike. The sentiment out of that body, the vote, about 60 to 40, was that we should accept the result of the negotiations and had a tentative agreement to return to work in the schools, pending one thing,” Sharkey said.

He noted that the return to work agreement with the city was the only issue stopping CPS staff from returning to school, and highlighted the new contract’s benefits.

“Just to be clear then, we believe that there are a number of important achievements in this contract,” he continued. “We think that the agreement on increasing staffing, enforceable class sizes and a number of other provisions that represent us achieving our goals.”

Despite an agreement ultimately being reached, there was still something to be desired in the resulting contract. While a tentative agreement was voted upon by the delegates, eventually the entire 25,000 member body of the CTU will vote on whether or not to ratify the contract. The vote must happen within the next 10 days.

“By far we didn’t achieve all of our goals. And people will say there are things we didn’t achieve. And there’s a real discussion about that, and I’m not gonna say that ratification is going to be a slam dunk,” Sharkey said. “Ultimately every member of the CTU who works for CPS is going to get a vote. That hasn’t happened yet and there’s going to be more debate and more debate and more discussion in our schools.”

Hundreds of CPS teachers and staff attended the event, supporting the CTU through what most considered to be an important final obstacle to returning to class.

Phillip Olazaba, a music teacher and union delegate at Peter Cooper Dual Language Academy on the Lower West Side, said Mayor Lightfoot should want to give school days back to students.

“The mayor has been talking a big game about how we’re taking away instructional time from the students. Now, I feel like right now, the ball is in her court to give those days back that she proclaimed were so, so important to the students.”

Reflecting on the past few weeks, Olazaba said he was proud of the teachers at his school for sticking through the strike.

“I think within my staff, they have shown me have tenacious they can be, how righteous and strong they can be, and how they’re so dedicated to this cause,” Olazaba said.

He said one of the teachers at his school was arrested in Tuesday’s protest at the Sterling Bay lobby. The CTU was protesting the city’s allocation of Tax Increment Financing (TIF) funds.

“We had one of our very own members of my school went to jail the other day for a political action. Why? Because we’re calling out big developers who are choosing to use TIF funds and use our tax dollars to develop these very expensive project parks and facilities that will benefit very few people in the city,” Olazaba said. “I don’t think the city has their priorities straight with it giving money to developers.”

Theresa Quitshaw, a teacher Sharon Christa McAuliffe Elementary School in Hermosa, said that while everyone wants to go back to their classrooms, the strike was an important moment of comradery among Chicago educators.

“It’s been exhilarating, fun, exhausting, everything all in one. It’s really given us a chance to bring our community together and we’ve had a lot of support from the community,” Quitshaw said. “It gives us a chance to spend time with teachers we don’t see every day because they’re on different teams and different floors.”

The strike ended with 11 missed school days, making it the longest strike since the 19-day CTU strike in 1987.