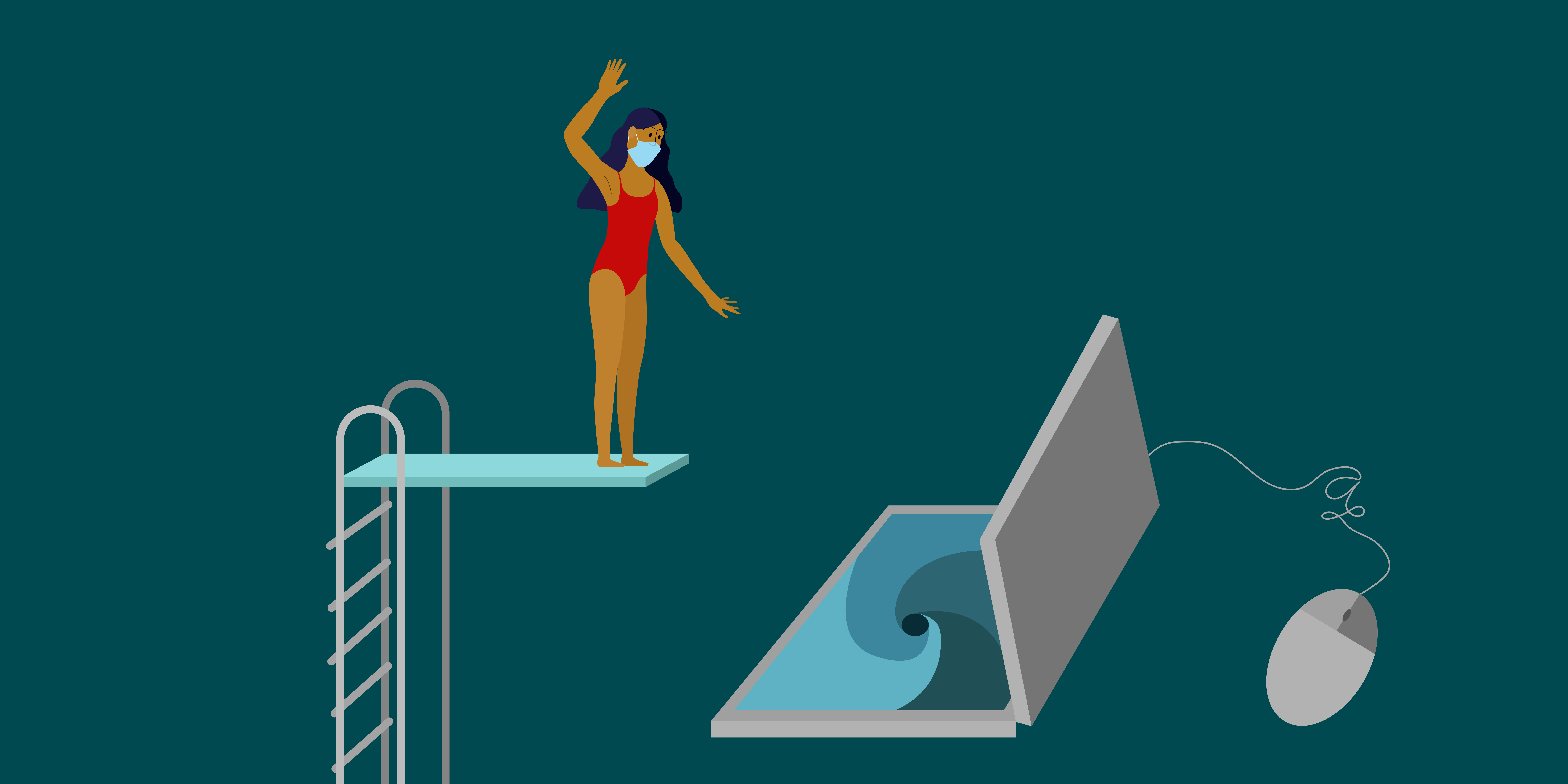 Students, Faculty, and Staff Reflect on the Remote 2020-2021 Academic Year

As the 2020–21 academic year has officially come to a close, faculty, staff and students are reflecting on a year that was like no other.

For the first time in the university’s history, operations at DePaul were almost completely remote for an entire academic year. As the university adjusted to its new medium, there were many challenges — students were forced to adapt to virtual learning and faculty had to navigate online teaching.

Freshman Zoe Bragado is just one of the many DePaul students who struggled throughout the past school year. She explained the unique challenge of starting college remotely in the fall.

“It was really weird starting online because you imagine yourself on campus and getting to know new people and seeing your professors in person,” said Bragado. “So jumping into college remote was definitely difficult, and getting acclimated to everything and knowing where resources are.”

As an incoming student, Bragado says she at first struggled to adapt to the online environment.

“I had never done remote learning, even in high school. I know other private schools had e-learning days or remote days, but I’ve never experienced that before,” explained Bragado. “Like, learning how to use D2L, I had never used anything like that before. I was like ‘What is this?!’ It was hard for me to understand how to turn in assignments or speak to professors.”

Because of these difficulties, she believes the university should have done a better job helping new students, like herself, transition to DePaul.

“Especially starting out as a freshman or even transferring to DePaul during this time, it’s definitely hard,” she said. “The transition for freshmen they could have done a little bit better because we had orientation, and then we had a meeting with our advisor, and then we went to class. That was it. It wasn’t like ,‘Here’s maybe a workshop to get acclimated to D2L to understand it’ or …‘There’s a mentor.’”

Senior Kendall Palmer had a markedly different experience this year. She says that for her, the academic year was “hard” but “still rewarding.”

Palmer, however, acknowledges that there were many variables that allowed her to succeed academically this year, despite the circumstances. Among these reasons, she points to her economic and racial privileges, consistent job security and years of experience as a student in higher education.

“I come from a position of privilege. I think that’s a huge part of it,” said Palmer. “I’m very fortunate also that I am a senior. So I had years of academics after high school under my belt, which, I think, aided in the ease of kind of switching to this different mode of learning.”

Even so, Palmer understands that not everyone shared her experience. She agrees with Bragado that the university administration did not do enough to support students during a year that presented countless physical, financial, social, emotional and academic challenges.

“I know a lot of students that were in very vulnerable positions,” said Palmer. “The resources and the support, it was lacking quite a bit. And I think the administration from DePaul would say, ‘I agree!’”

Ellen Fingado, the dean of students at DePaul, believes the university made significant changes to meet students’ academic needs. She listed the many ways the administration helped provide students with resources and accommodations throughout the year.

“Academic affairs and the office of the provost and the colleges came together to agree on these unilateral, large-reaching policies and procedures related to flexibility, so Pass/Fail options, extending deadlines for incompletes. And I think those are good things to do, create large-reaching processes and policies so students can understand what’s available to [them].”

Like many students, Palmer doesn’t believe this was enough.

“I think there was just a need for support, connection, community and help and I don’t know if we found a way to do that,” Palmer said. “I think giving students more flexibility could have been an option. And I know administration would have been like, ‘Well, we did!’ But you only did for part of last year and part of this year. So did you really? No.”

The policy Palmer specifically refers to is the Pass/D/Fail system the administration implemented in the Spring Quarter of 2020.

That policy allowed undergraduate students to opt into an alternate grading scale that would either award them a “P,” or passing grade, for work that earned at least a C- letter grade, a “D” for a D+ or D letter grade, or an “F,” for a failing grade.

As part of the new policy, students had three days after final letter grades were posted to decide whether they wanted to switch to the Pass/D/Fail scale.

Overwhelmingly, students took advantage of this new policy. During the Spring Quarter of 2020, there was a 509% increase in students opting into this alternate grading scale.

In part because of this, the Faculty Council voted to extend the policy to the Fall Quarter and December Intersession.

However, despite a petition from students and efforts by the Student Government Association, the university administration chose not to reinstate the policy for the Winter and Spring Quarters.

SGA President Alyssa Isberto says this was just one way the university could have better supported students during the pandemic.

“Something that I wish could have been done [is] extending that Pass/D/Fail policy,” says Isberto. “It takes a burden off your back, not having to worry, especially for students who are struggling to cope with a million other things in the middle of a pandemic. School may not always be their priority, so I feel like this would have been super beneficial to students, extending that policy throughout the entire time that we were in a pandemic.”

Responding to these complaints, Fingado says the university did the best it could.

“I think the university did the best that they could with, again, those large, far-reaching things about Pass/Fail and incompletes and whatnot, but still … being clear about what we can and cannot accommodate.”

However, academics weren’t the only way students felt they could’ve been better supported.

“I think giving students more flexibility could have been an option. And I know administration would have been like, ‘Well, we did!’ But you only did for part of last year and part of this year. So did you really? No.”

Isberto believes more should’ve been done to help those students struggling financially during the pandemic.

“Having a tuition decrease would have been super helpful. In the student perspective, we’re paying the same price for less resources. We don’t have access to the library — well we do, but it’s restricted. But even just other resources, because DePaul offers a lot of resources in terms of computers, printing, books, technology, things like that, and we didn’t have as much access to that anymore.”

Though there was no tuition decrease, the university did implement a tuition freeze for the 2020-21 academic year. For the upcoming school year, undergraduate tuition rates will remain the same for most colleges and programs, however, there will be increases for the Theatre School and School of Music.

In addition to this, Fingado stressed that the university also tried to meet students’ financial needs in other ways.

With help from fundraising, Fingado says her office was able to award over $570,000 to 595 students in the Spring 2020 term alone.

But demand continued this year as well. Fingado notes that the university continued these efforts throughout the Fall, Winter and Spring Quarters as many still needed financial relief.

“The demand in the spring 2020 term was really significant. The demand continues. It’s definitely dropped off since then, but we are still awarding more student emergency assistance awards now than we ever have in typical academic years.”

In addition to this, many graduates were frustrated with the minimal graduation celebrations that the university hosted.

Palmer is just one of those many graduating students who believes the university should have done more to celebrate students’ accomplishments.

“I think that there could have been much more to commend students for making it through,” she said. “I think we’re overlooking how big of an accomplishment this is, and how for certain students, it took a lot more to get to this place than others, and for even the ones that it didn’t take a lot to get to this place, it’s still just as commendable and just as distinguished as the next. I really think we could have heightened the experience for a graduating student this year, and last.”

Though she’s graduating, Palmer says she has concerns about the return to campus in the Fall.

As a member of administration, Fingado acknowledges these uncertainties. However, she believes DePaul’s mission will help guide decisions and ease the transition back to campus.

“One of the things that I love about DePaul, and what keeps me working here for so long is our mission. I think this is where our mission can really continue to come alive is how we welcome people back to our physical campuses,” stated Fingado. “I think that’s really going to be paramount as we return back to campus: is feeling cared for and that people know what they can expect when they return.”

Many in the university community, however, don’t know what they can expect when they return.

Despite surges of new COVID-19 variants, the university has stated that masks won’t be required for individuals who are fully vaccinated. However, those who have not yet been vaccinated are expected to wear a mask at all times.

Even so, the university has not explained how it plans to enforce this policy — or how it will ensure non-vaccinated students continue to mask up.

Moreover, though students will be required to be vaccinated, there’s still no word as to whether that requirement will also apply to faculty and staff.

For these reasons, many uncertainties about the upcoming academic year remain. However, the university has assured students, faculty and staff that more decisions regarding the 2021-22 academic year will be announced closer to the start of the Fall Quarter.

In addition to all of the challenges that last year presented, Fingado understands that there will likely be equally as many adjustments throughout the next year. As both the university administration and those in the community prepare for the transition to an in-person medium for the first time in over a year, she underlines the importance of compassion and understanding.

“I do think it’s important to recognize that it’s going to be an adjustment for all of us. Some people are really excited to go back, some people are not so sure and maybe are feeling uncomfortable,” said Fingado. “So it’s important that we all give grace to each other, that we meet people where they are, and that we continue to be flexible and really take advantage of what we learned during this time.”

back to school, COVID-19, DePaul