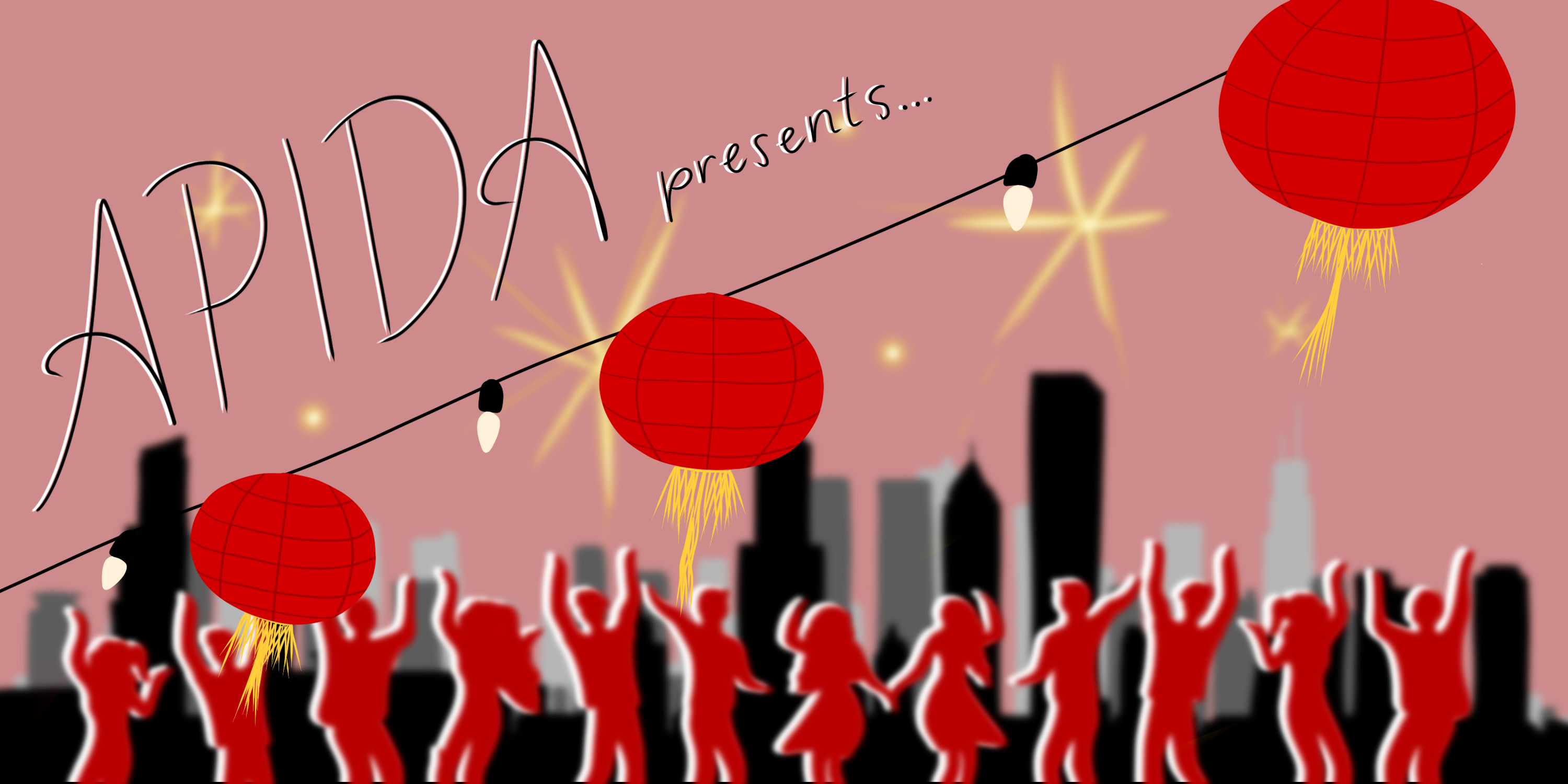 “This is the first time we’ve collaborated with other Asian organizations, actually, so it feels kind of empowering to finally be able to do this in person with other people.”

This piece has interactive audio elements. Click or tap the grey highlighted text to immerse yourself in the story.

“The first half of the dance was about soft and gentle winds,” said Tam, co-founder and artistic director of Yin He Dance. “The second half was more serious and like how wind can be very powerful, like wind creates tornadoes and hurricanes … so that was a lot faster and more exciting.” 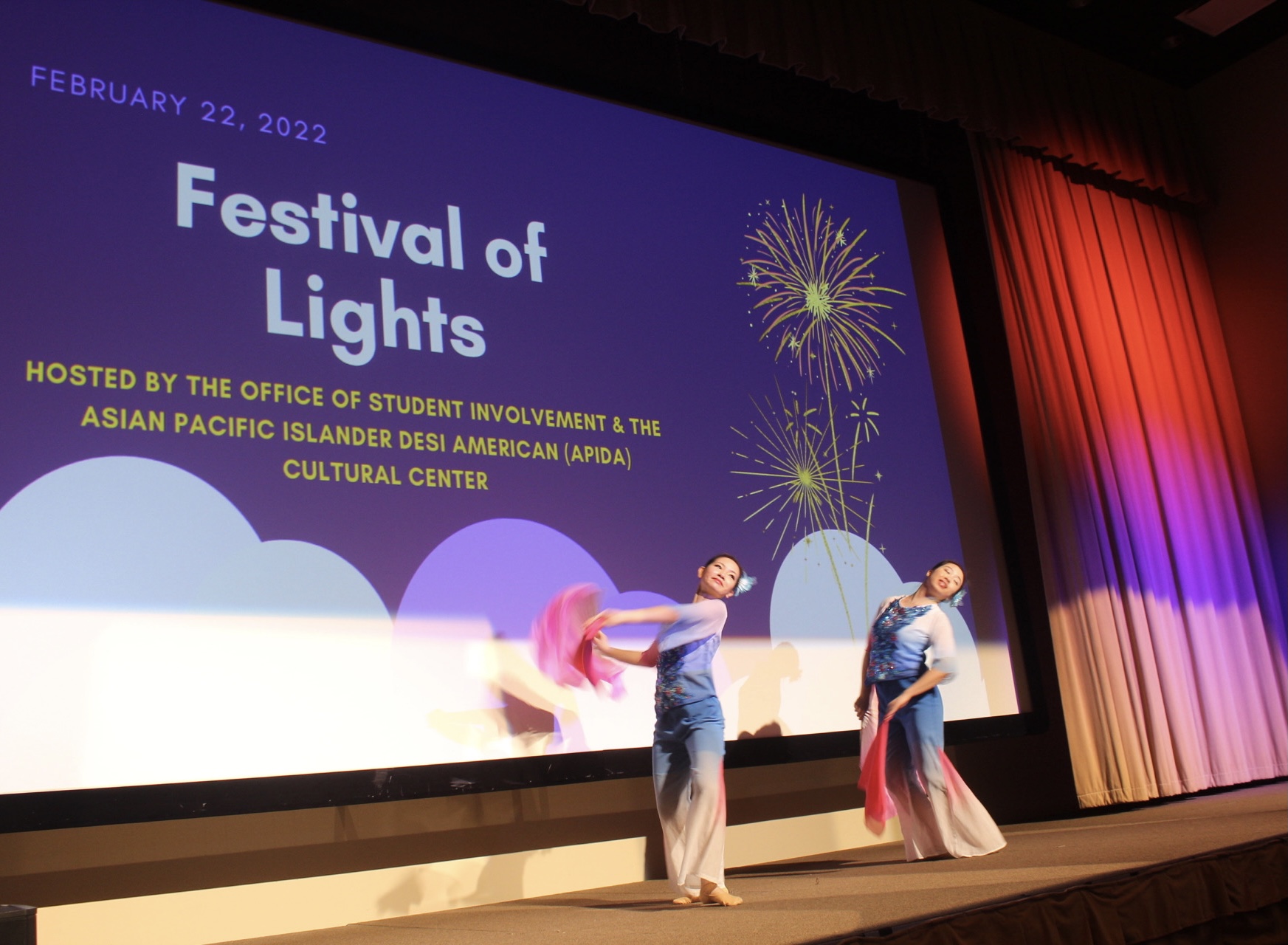 The DePaul APIDA (Asian, Pacific Islander and Desi American) Center and Office of Student Involvement (OSI) collaborated to bring Ying He Dance on campus and engage APIDA student groups for a night filled with food, games and performances.

“After reflecting more on Lunar New Year, it is a lucky auspicious date [and] it just kind of aligned,” Jane Baron, the APIDA Cultural Center coordinator, said. 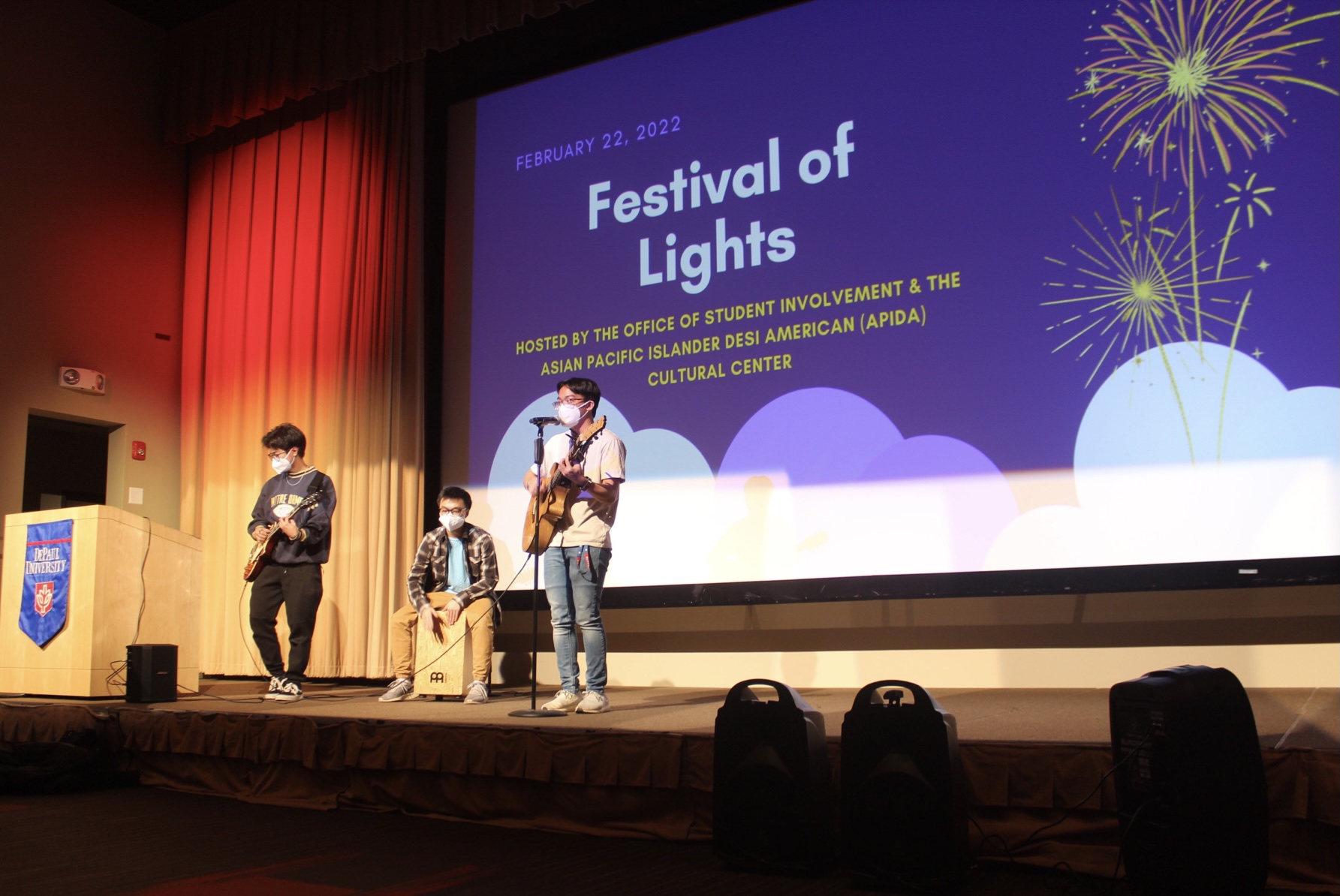 Michael Cali sings while playing the acoustic guitar, Buduan on the bass guitar and Santiago on the cajón. Jessica Nalupta, 14 East.

The trio had their first live gig earlier this month at OSI’s Sounds of Sheffield, which opened the door for them. Baron heard about them from that gig.

“Jane reached out to me … saying she wanted us to perform at the APIDA Festival of Lights [because] she heard our stuff. Without a doubt, we said yes,” Michael Cali said. “We’ve been dreaming of this moment ever since we were like in high school and now that we’re actually starting to make baby steps and just grow our presence by just starting in our community … our local community here at DePaul … hopefully we can expand.”

Concluding the performance section of the festival, DePaul K-pop Dance Club wowed the audience with two dance numbers to the songs “Supper Yuppers!” by WSJN Chocome and “Pretty Savage” by BLACKPINK.

“We wanted to show the potential of our group by performing two different concepts. I am happy that it came together and we were able to show a good performance,” DePaul K-pop Dance Club president Madison Hill wrote in a statement.

Because of the nature of the pandemic, Hill said it was “a bit daunting” to perform in front of a crowd after quarters of being remote, but it was also exciting for them to finally prepare new dance routines. 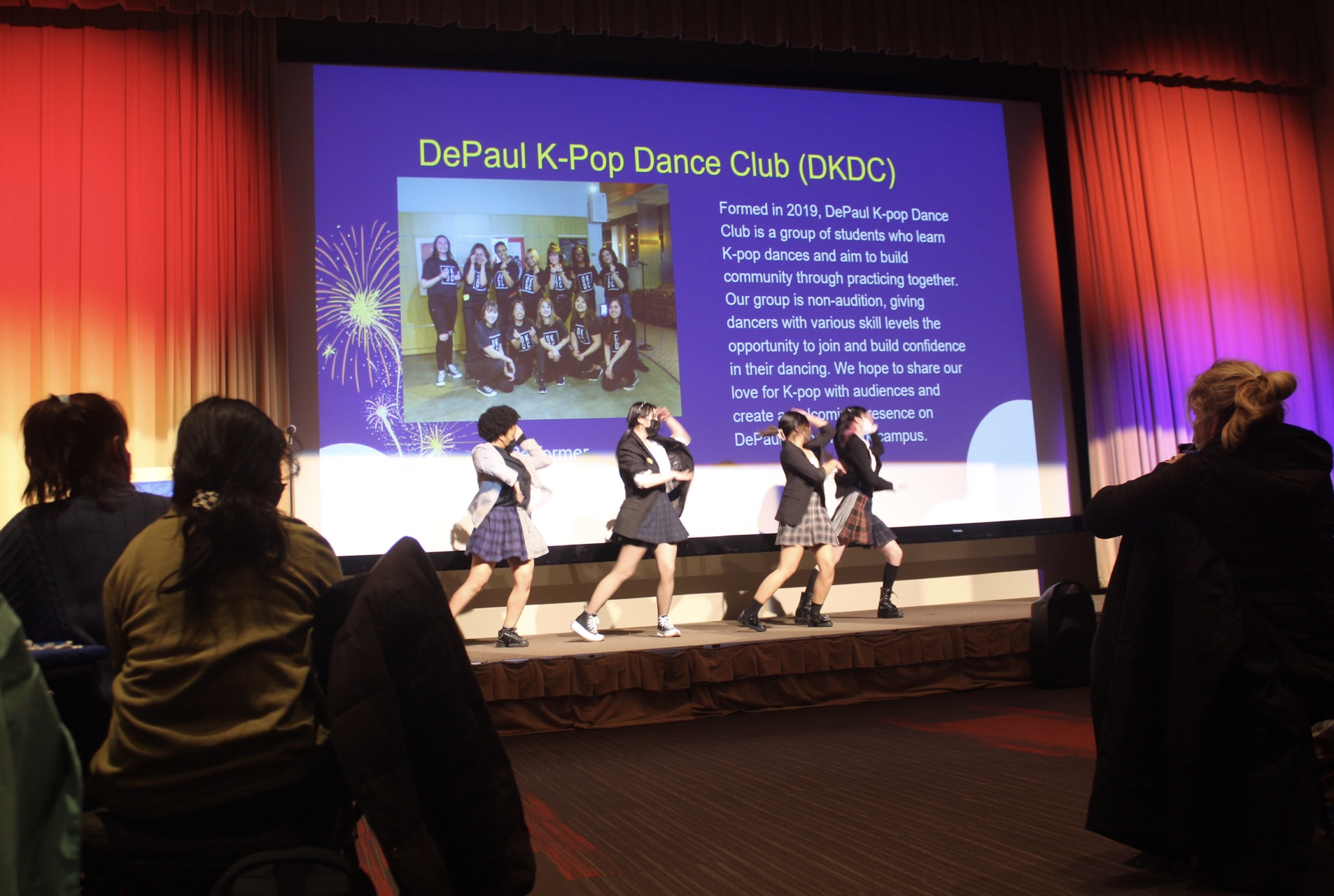 Since the event was open for everybody, regardless of DePaul affiliation, the organizers ensured to check either the DePaul I.D. or vaccination card prior to entering the student center.

“External [performers] were required to submit that they are vaccinated and we’re following university protocol [that] if you are not eating, you have to have your mask on,” Baron said.

During the second half of the evening, attendees took turns in enjoying the feast and exploring the games prepared by APIDA student organizations.

Animation senior Johanna Wieden tried all the games available, but bầu cua tôm cá stood out as her favorite.

As explained by Erika Hong, one of the game masters in the Alpha Phi Gamma booth, bầu cua tôm cá is a Vietnamese dice game with a board that has six animals on it. Each player starts off with making a bet (using fake money) on their animal of choice. Once the game master rolls the dice and it matches the player’s bet, the player will receive double the bet. Otherwise, the player needs to return the bet to the dealer. 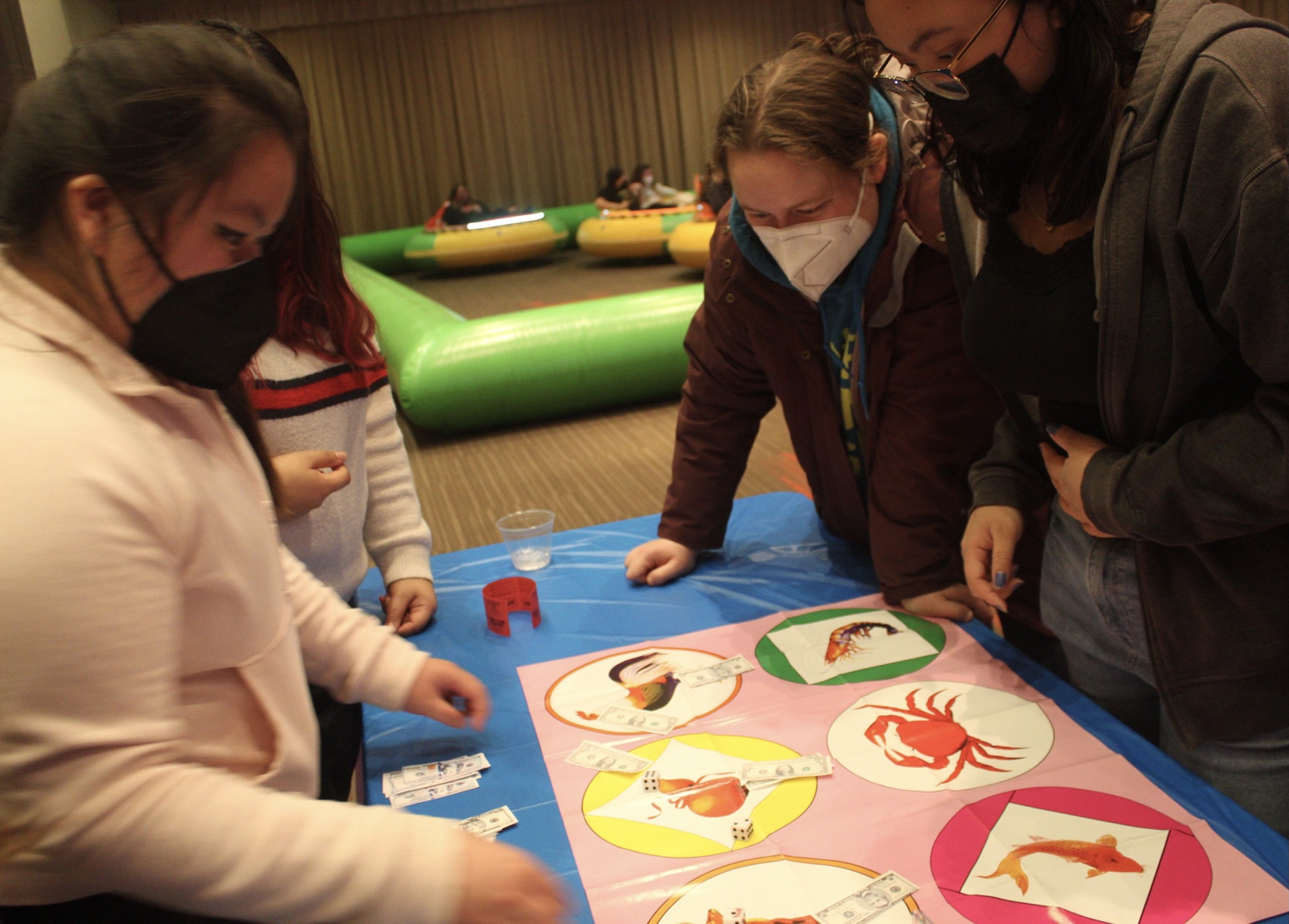 Hong, the sisterhood chair of Alpha Phi Gamma, an Asian-interest sorority, reflected on the impact of the festival.

“This is the first time we’ve collabed with other Asian organizations, actually, so it feels kind of empowering, in a way, to finally be able to do this like in person with other people,” Hong said.