An Escape from The Heteronormative: DePaul’s Queer...

An Escape from The Heteronormative: DePaul’s Queer Prom 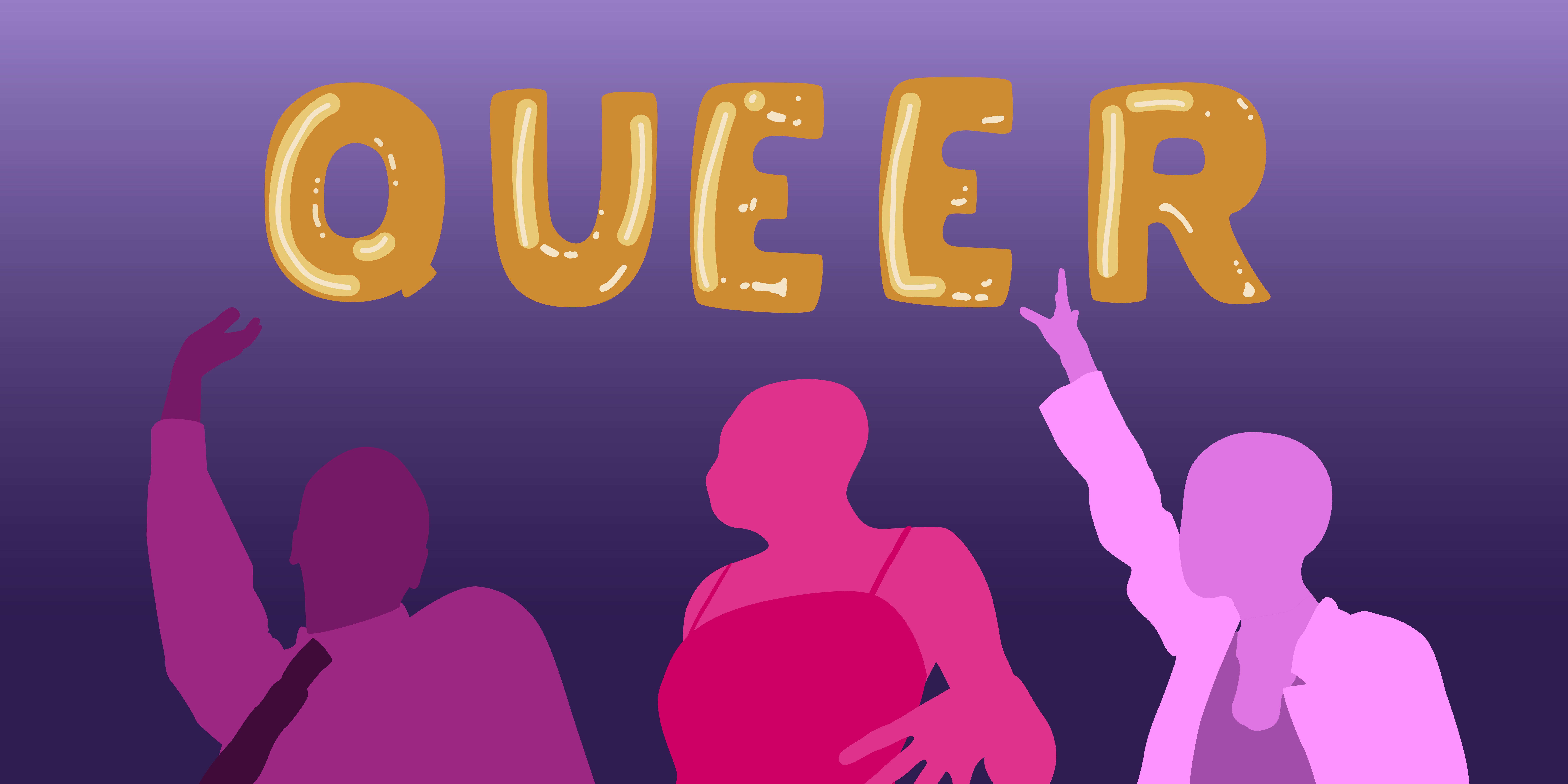 “A Queer Prom goes far beyond lighting, music and dress but rather, it represents a space where members of the LGBTQ+ community can exist in peace, without apology and without fear.”

In all their Doc Martens and pantsuit-clad glory, students steadily flowed into DePaul University’s first-ever in-person Queer Prom on February 25. The room was dimly light in purple, blue, pink and yellow hues, giving off an all-too-fitting Euphoria-like aesthetic, on-point for a crowd of Gen Z queer folks. The prom’s theme was Starry Night with the attendees’ outfits spanning from floor-length gowns and tuxedos to casual streetwear — the differing styles complementing each other perfectly against the large golden balloon letters at the back of the room which read, “QUEER PROM.” 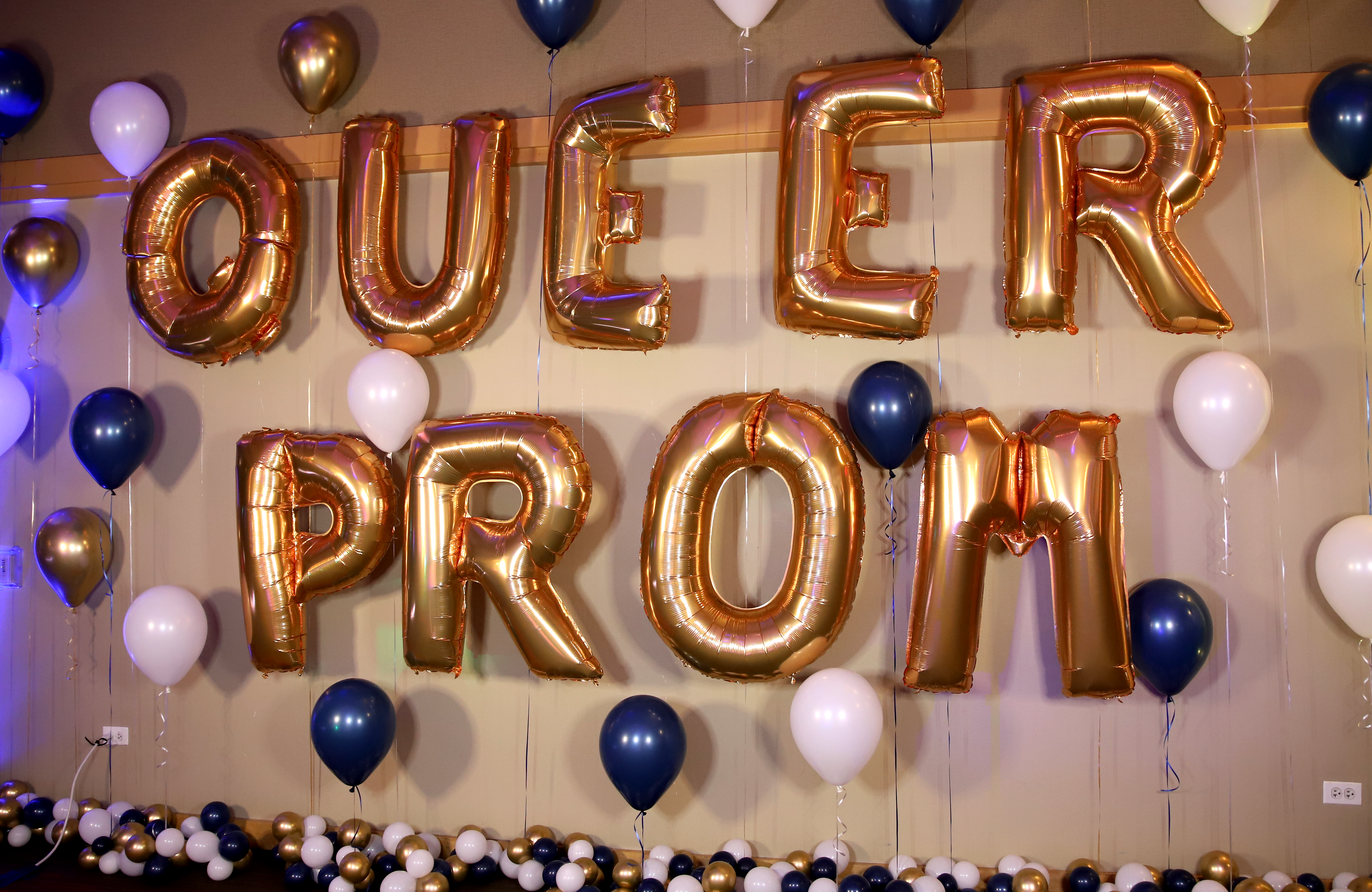 While the dance floor was packed for the majority of the event, attendees danced along to the perfectly curated set by DJ Ron Slomowicz, resident DJ at Roscoes Tavern in Northalsted (Chicago’s historic queer enclave formerly known as Boystown). The room was also filled with games, including ping pong, foosball and cornhole, along with a smattering of ring lights along the perimeter to ensure the event’s attendees were able to capture the perfect selfies. 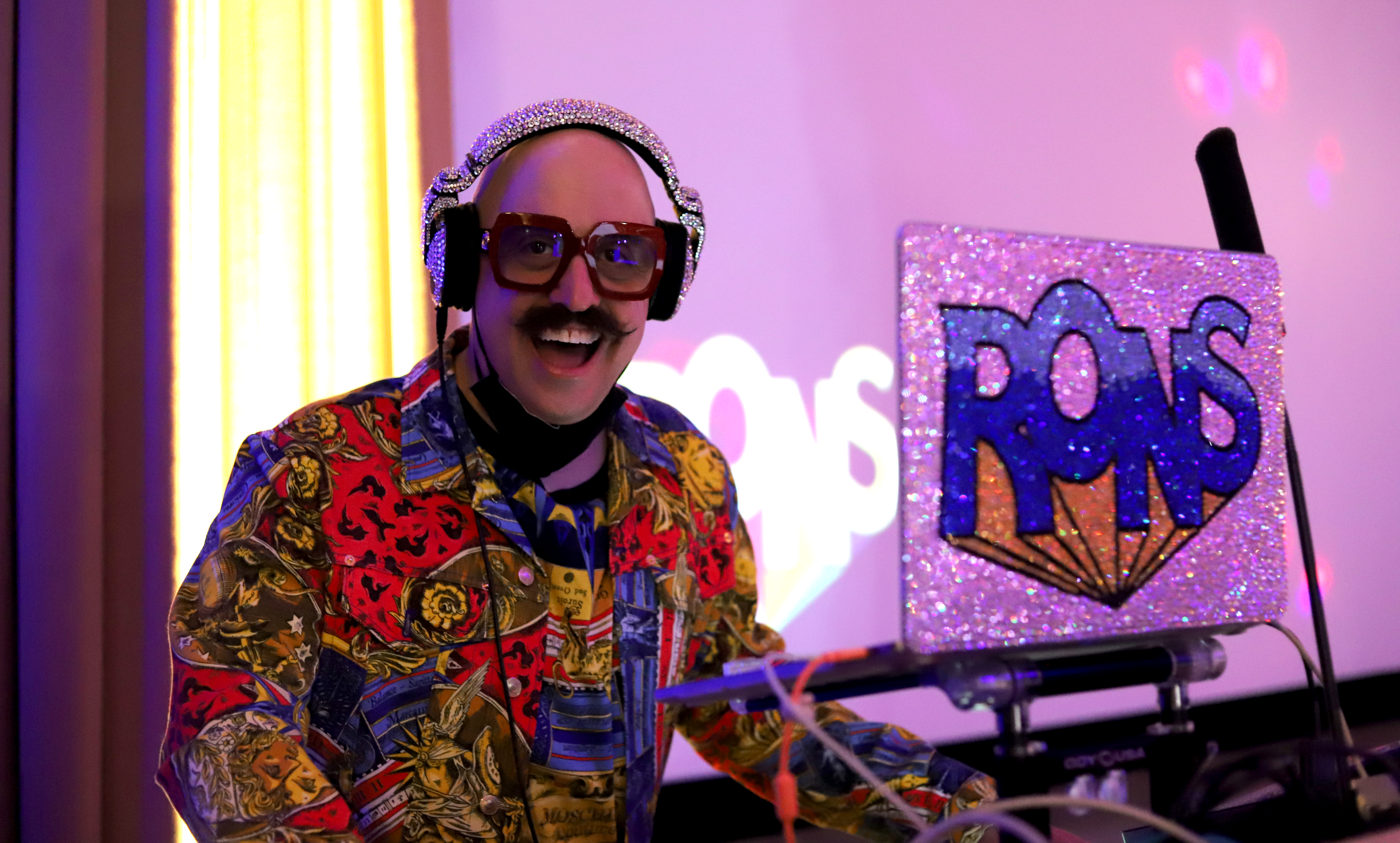 While the expertly crafted aesthetic was an undeniable bonus of the event, the importance of a Queer Prom goes far beyond lighting, music and dress. Rather, it represents a space where members of the LGBTQ+ community can exist in peace, without apology and without fear — something many of the night’s attendees were not able to experience at their proms in high school.

So You Want to Organize a Queer Prom?

The first Queer Prom to take place at DePaul was a virtual event held over Zoom in May of 2020 by Spectrum, DePaul’s community-based LGBTQ+ organization, but Student Government Association Senator for LGBTQ+ students Riley Reed wanted to see the event on a bigger scale, this time in person. Hosting a Queer Prom was directly in line with Reed’s initiative to create more safe spaces — and events — for queer people at DePaul. So, together with Spectrum, the LGBTQ+ Resource Center, the Office of Multicultural Student Success and the Office of Student Involvement’s Director Courtney James, a group of queer-identifying SGA senators began planning the event during Fall Quarter.

The organizers’ main goal? To create a prom for those who didn’t get one – either because they felt unwelcome or unsafe attending in high school or because the presence of COVID-19 thwarted their chance to attend an in-person prom. 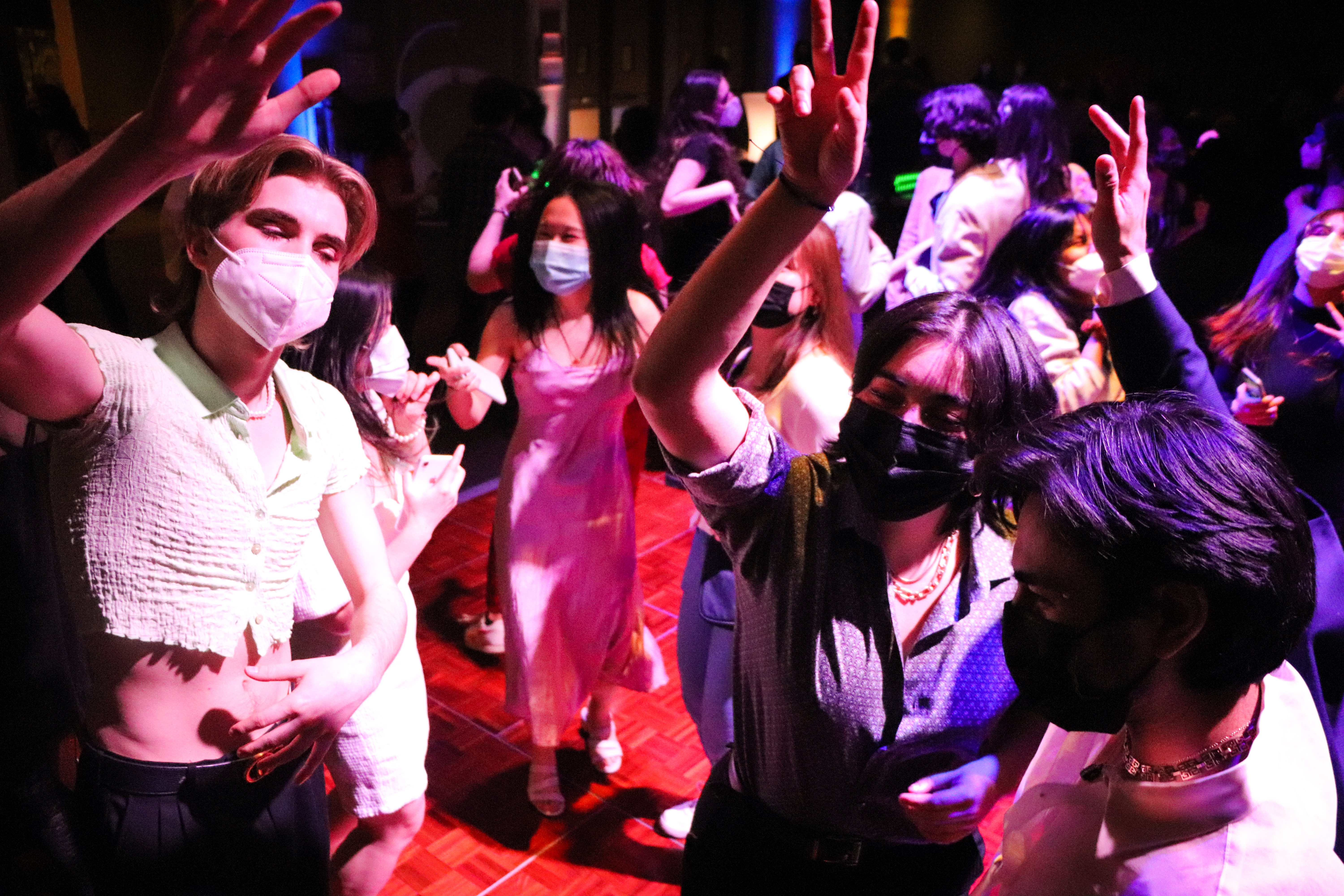 “Prom is a very heteronormative thing. I know that when I was in high school, I didn’t go to my senior prom because I wanted to go with a girl but it didn’t feel accepted where I was,” Reed said. “Some students also just didn’t get a prom because of COVID. So, it’s combining those two ideas and especially our emphasis on we want to create a safe space, and this is not a new idea.”

SGA Chief of Staff and co-organizer of the Queer Prom Magoli Garcia echoed this sentiment. She said the Queer Prom signifies something that members of the LGBTQ+ community often don’t get to experience in their youth.

“I did not have the opportunity to feel safely out in high school and so having this event now, I think it’s just a really great way for people to, in a sense, kind of catch up and just be able to finally get those experiences and come where they genuinely feel comfortable with themselves,” Garcia said. “It’s like a chance to regain or take back what we deserved during our years in high school.” 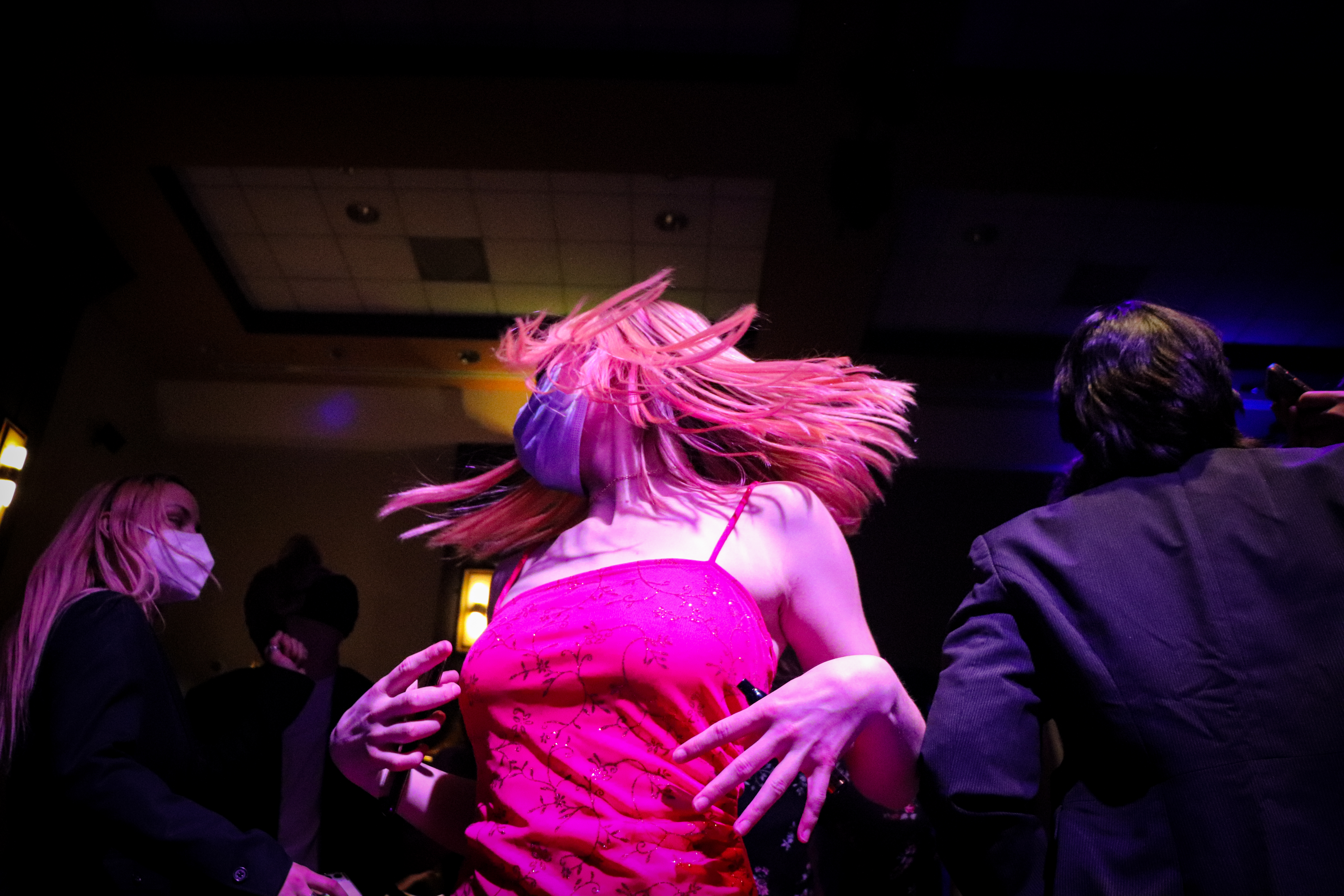 Ellie Meier dances to a song in the middle of the dance floor. Grace Del Vecchio, 14 East.

Catholicism and Queerness on Campus

When entering DePaul University’s Lincoln Park Student Center from Kenmore Avenue, you are first met with a Pope Francis cardboard cutout that stands outside of the Catholic Campus Ministry Center. If you continue walking to the center of the “Stu,” you will reach the multipurpose room which held DePaul’s Queer Prom.

DePaul has created an on-campus environment with opportunities to explore identity and safe spaces for queer people to flourish. The LGBTQIA Resource Center on campus promotes queer safety and enables an environment for community building. The university also holds annual queer celebrations such as the Marsha P Johnson & Sylvia Rivera Annual Gala, the Annual Drag Show organized by Spectrum and a weekly discussion group called “Gender?” — offering students a place to build community and discuss this topic. The continued support of the LGBTQ+ community on campus is important to maintain the safety of queer spaces on campus. 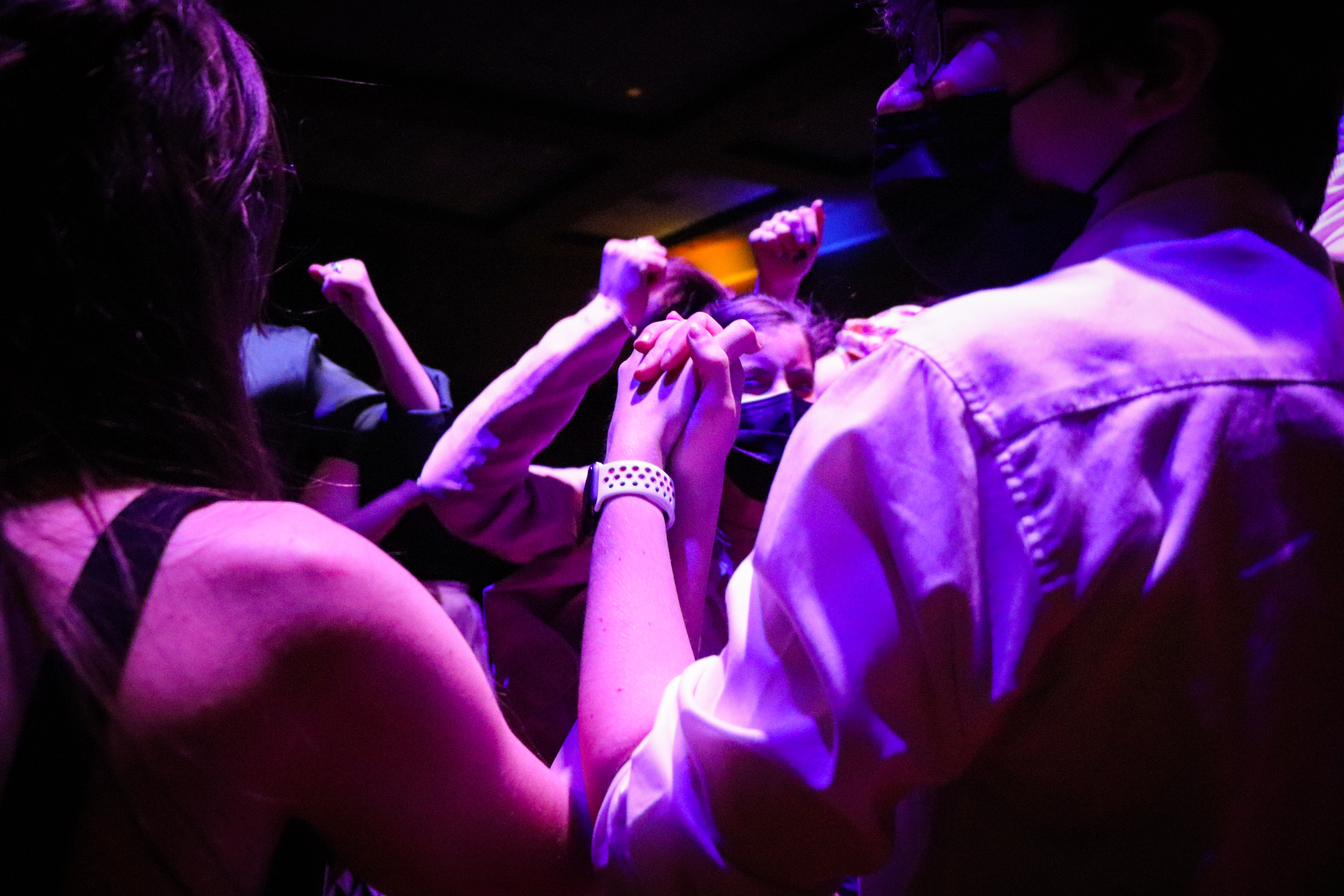 In many cases, the positive and safe community at DePaul has attracted a large LGBTQ+  community. As the nation’s largest Catholic university, this may not be the initial assumption about campus life but it has become an important part of on-campus life.

LGBTQ+ communities and ideas supported by DePaul, however, have received mixed messages from Pope Francis. Regardless, DePaul’s support of the event was apparent. Reed said there was no pushback from the university in the production of a Queer Prom.

According to an article in 2018 from The DePaulia, “In 2017 that number [of DePaul students who identify as Catholic] has dwindled to 38%. By comparison, the University of Notre Dame has 81% of its incoming freshmen identifying as Catholic. Boston College reports 70%, and Loyola University reports 59%.” 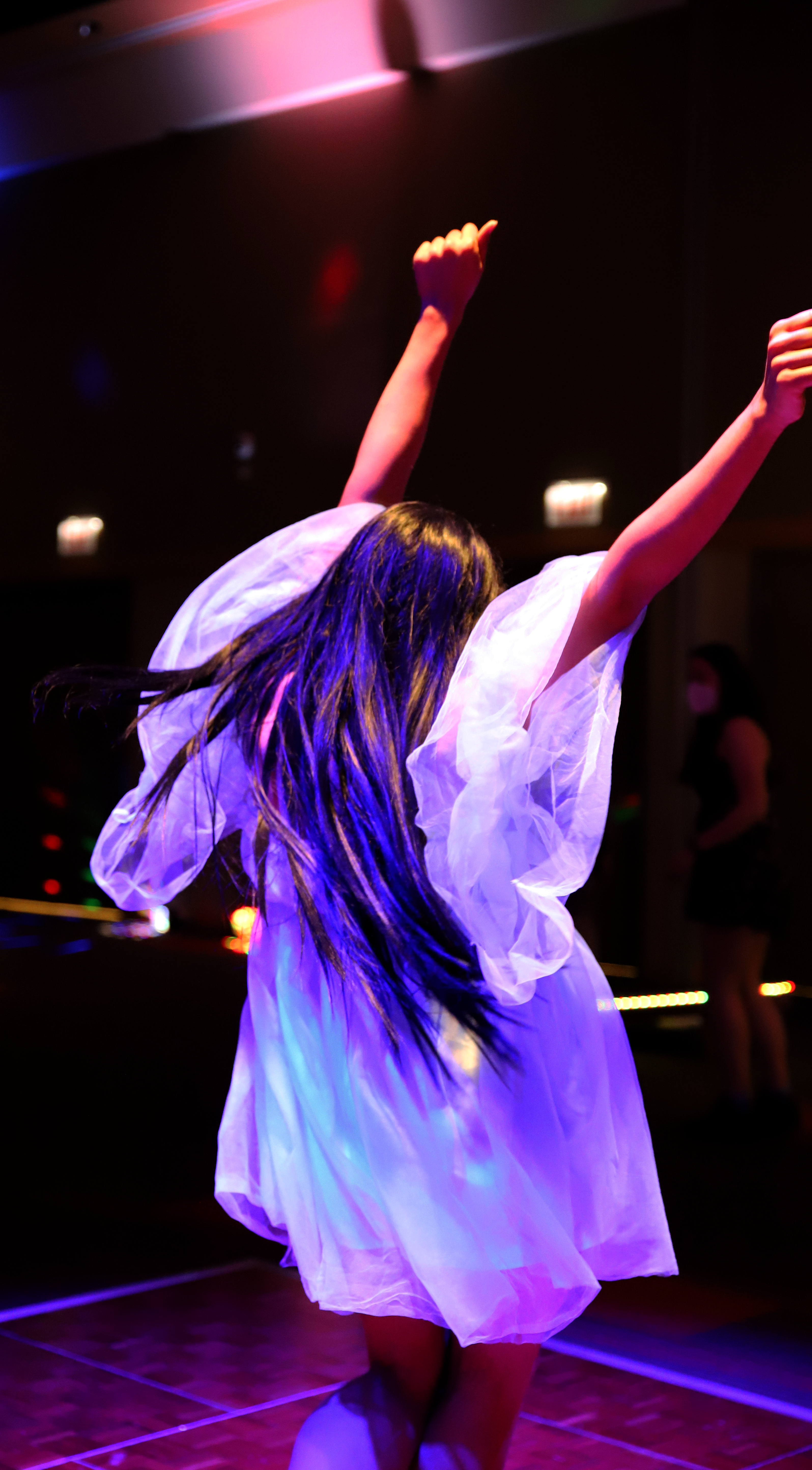 “A prom indicating, like celebrating queerness – is so amazing because our queerness is…so like, like hit on and it’s so attacked all the time and everything for tonight is like a celebration of us. I think that’s amazing,” said another student by the name of Vansh. Billie Rollason, 14 East.

Though the Catholic presence on campus has dwindled, the presence of Vincentian values in clubs like the Vincentian Service and Formation has remained. A big part of the group’s mission is to find inspiration from the actions of St. Vincent de Paul, and empower students to promote and show human dignity to all people — especially marginalized communities. St. Vincent de Paul’s sentiments to encourage the protection of those marginalized include the queer community in the present day.

As Reed explained how the university has supported the queer events on campus, she also said, “I think just with the Vincentian values of social justice, community engagement … are a lot of the reason why we’ve been able to go so far ahead with this.” 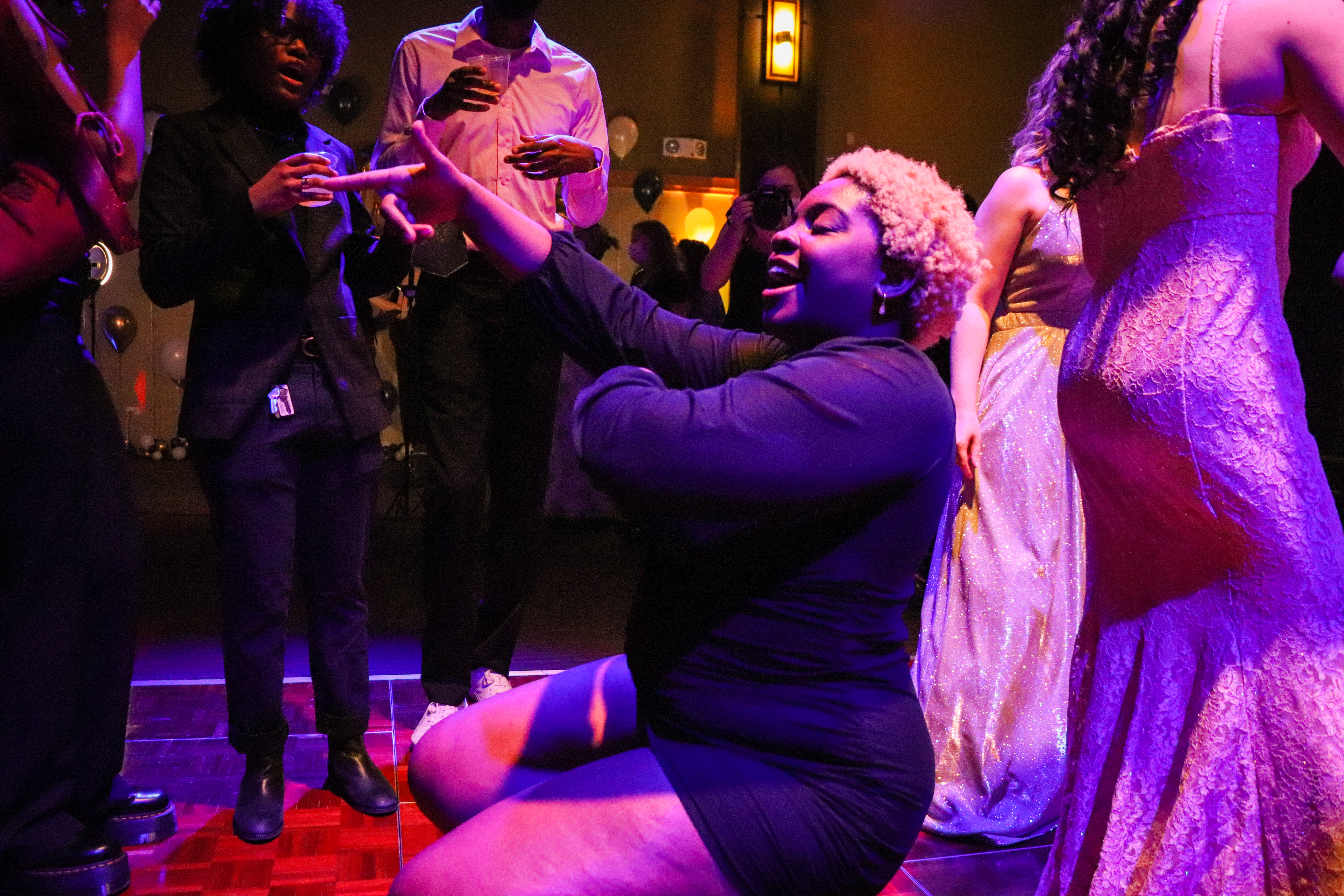 Karma Jackson is cheered on by friends as she takes over the dance floor. Grace Del Vecchio, 14 East.

The collaboration of many DePaul groups created a safe place on campus in the same building as the ever-present Pope cardboard cut-out. It might be anomalous to see these themes adjacent but on the night of the prom, a safe queer space was established right alongside it. Everyone was welcome to take up as much space as they wanted. The multipurpose room in the student center was overflowing with divine energy.

To have the opportunity outside of a high school heteronormative prom. To see queer joy, at a unique university level, felt very special. No one should miss out on moments to celebrate love with those you feel welcomed by. 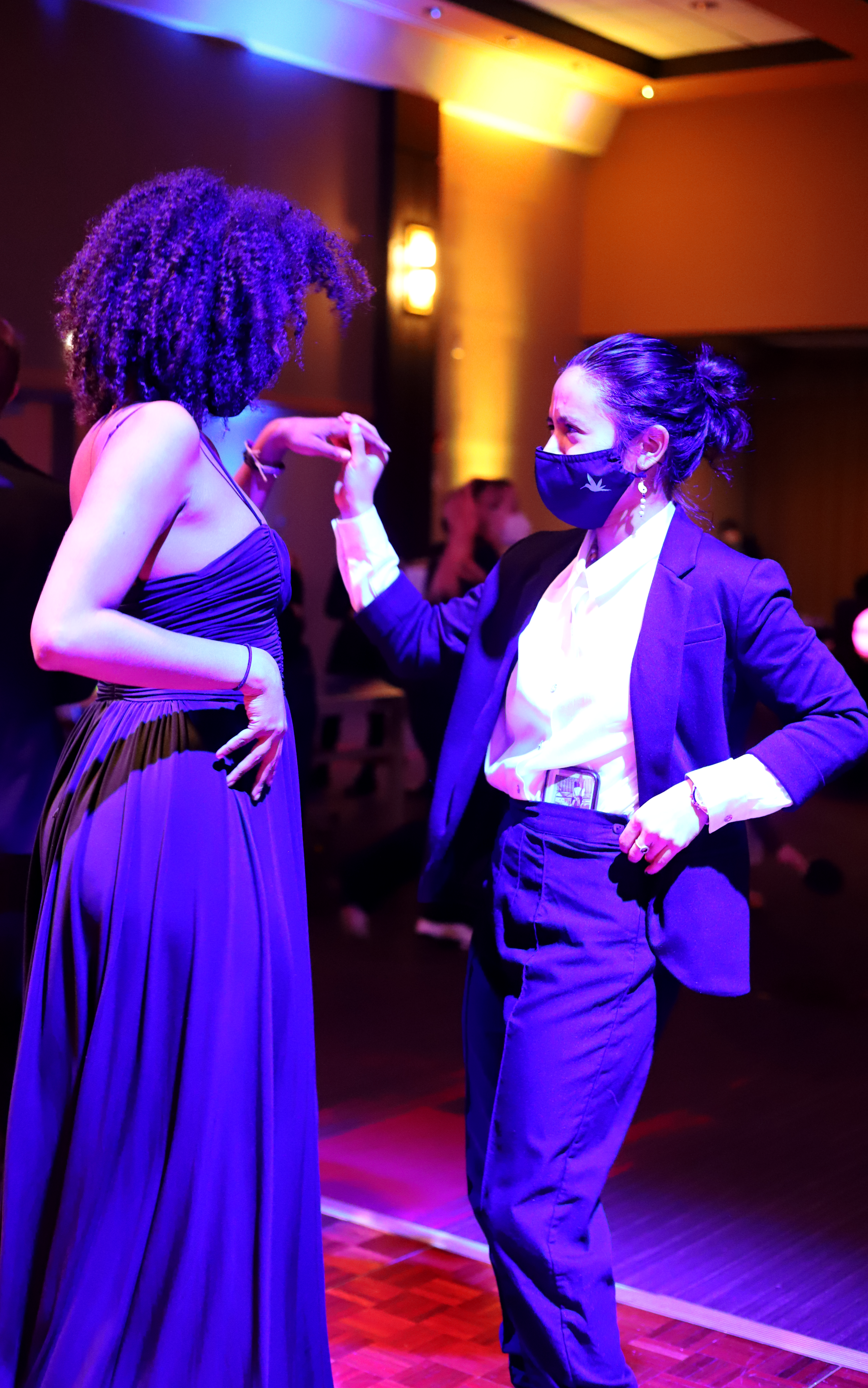 Sentiments from the Starry Night

With this year’s Queer Prom being the first event of its kind, the students’ reception of it was integral. Mikyhia Worsham, a second-year majoring in political science and African and Black Diaspora Studies, attended the Queer Prom wearing a tuxedo.

When Worsham initially bought the tuxedo in their hometown of Memphis, she said the store’s employees were surprised to see her. “They were very welcoming, but the initial surprise, like oh, we’re not used to seeing feminine people walk into our tux store,” Worsham said. “They actually tried to direct me to the dress shop that was right next to it. So, I would say the prom scene is very heteronormative.”

Being able to now attend queer events at DePaul has been a great experience for Worsham. “[It] means getting to be a part of a community that I usually don’t have at home. And it’s nice to be able to meet new people and just be somewhere where I can just be me and not have to stress about other people’s ideas,” they said. “I’m not used to a school having queer LGBTQ+ events. So it’s really nice to have that here.”

Also during the prom, co-organizer Garcia noticed a student doing the worm. “I mean, someone just did the worm behind us,” she said. “You know, so like, you just see people have the space to be there — like themselves. It means the world to me, you know?” 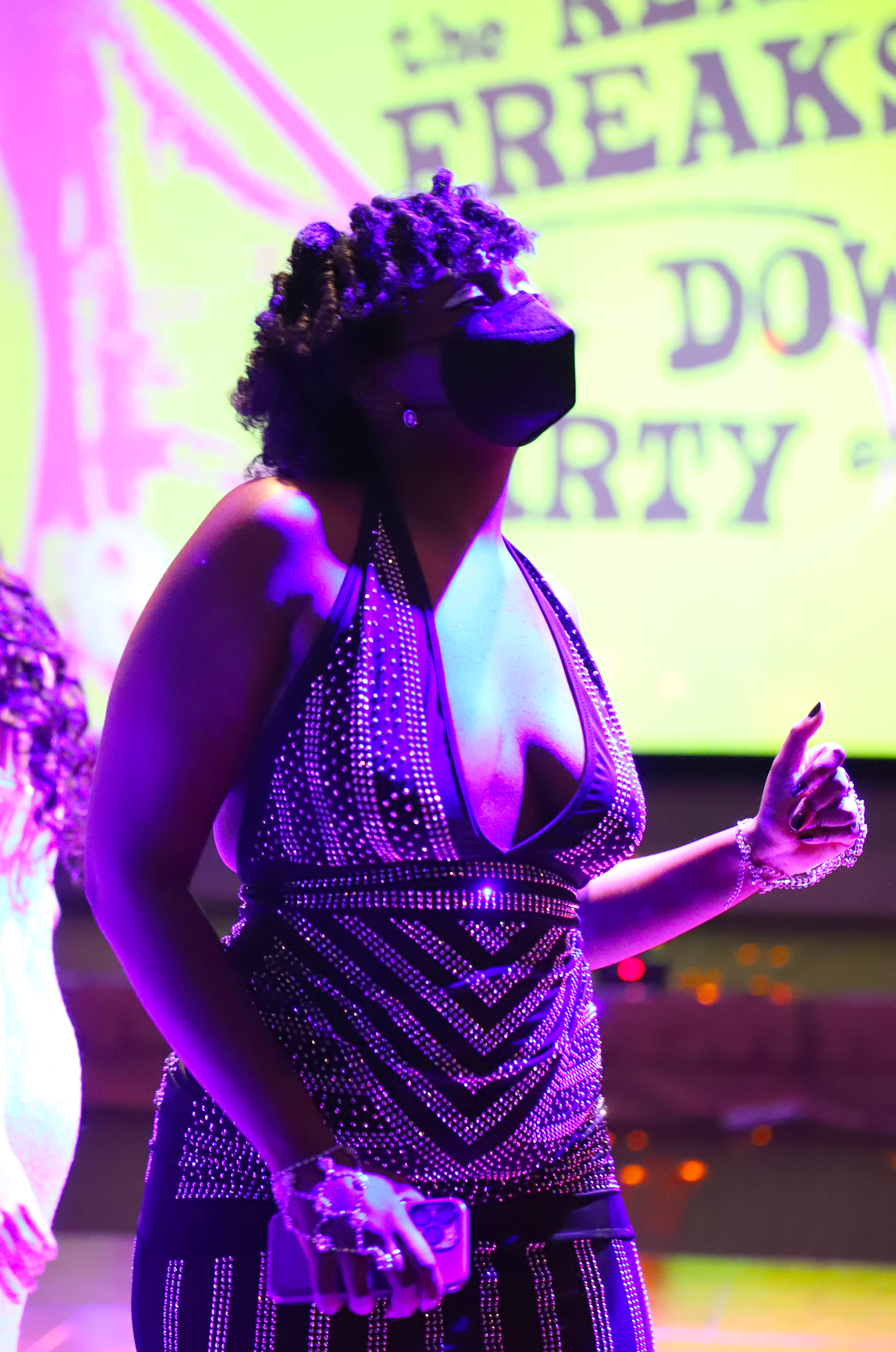 Tashelle Riley dances under the spotlight on the dance floor. Billie Rollason, 14 East.

Madonna’s “Material Girl” played loud and proud, as the night continued in great spirits. To expect the unexpected was a culmination of the night’s offerings, every moment just a bit more camp than the last.

Mason Decker, SGA Executive VP of Academic Affairs said, “There’s like a whole, like, kind of sense of relief here. I wasn’t able to dress as cool as I am right now … in high school.”

Decker was accompanied by another well-dressed friend, Jeffrey Pagels, who was decked out in a golden crown — deeming himself the “prom king of the night.” 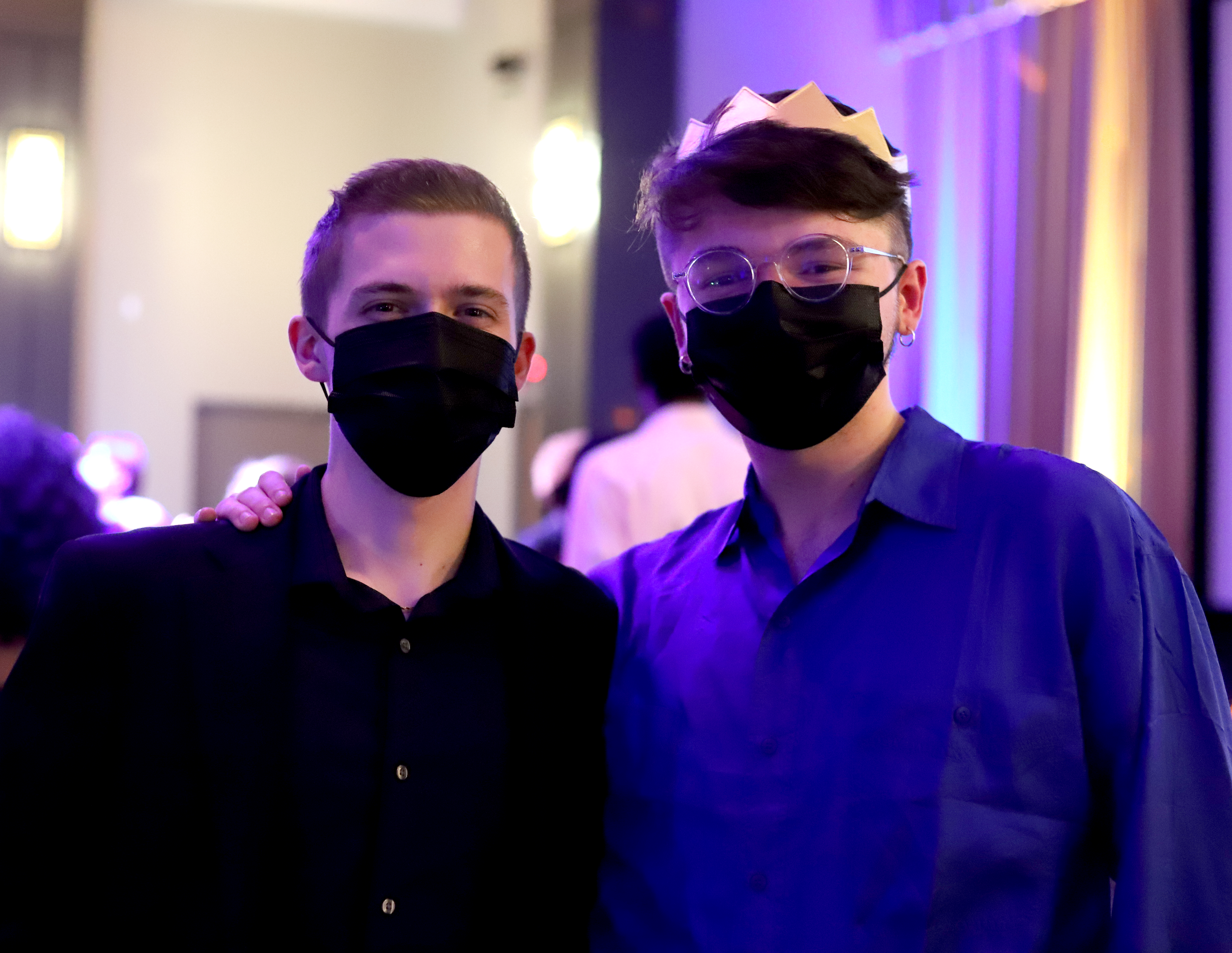 The event’s organizers pulled off an electric prom with effervescent fashion and most importantly — a safe space for people to be their true selves, around others who share similar experiences and respect the choices of one another, a space where they can dance.

The prom’s organizers hope for this event to become annual.