The Panthers and the Press

It was an occasion filled with laughter, teasing, and, as to be expected, a few hiccups, but most of all it brought a familial warmth that many of us had not experienced since late August. DePaul’s first Black Homecoming truly was, as Black Student Union E-Board member Kayla Palmer said, an event for us. BSU held different activities every night of the week from Oct. 10 to the 14 for black students of all shades and backgrounds to attend. The schedule included a movie night on a chilly Monday evening; a seasonally appropriate taffy apple social on Tuesday; a standard BSU general body meeting Wednesday; a comforting, delicious, and catered soul food dinner on Thursday; and a pep rally on Friday to celebrate “being black and being together,” to quote senior and BSU president Mario Morrow Jr.

The movie on Monday was supposed to be chosen by a poll online, and the suggestions were all classic black movies. “Friday,” “The Wood” and “Coming to America” all made appearances on the poll. Upon arrival at the event, members of the E-Board were still debating as to what movie would be best, especially considering that this was the inauguration of what would hopefully become a long tradition. After originally deciding on “Coming to America,” the group switched gears and settled on “New Jack City.”

Tuesday was the taffy apple social, an activity that paired nicely with the falling leaves outside. In the room, a table was pushed against the wall across from the door full of fresh rosy apples, assorted nuts and utensils. At the end sat a crock pot, and every few minutes an E-Board member would go over it, open the lid, stir the sauce, close the lid, and turn back to the expectant attendees with a slight look of disappointment. Unfortunately, this continued through the rest of the night without success. But even with that setback, the students in attendance still managed to enjoy each other’s company by meeting new people, playing hangman and dancing. Plus, students had the opportunity to purchase the first ever Black Homecoming shirts, which came in a variety of colors. 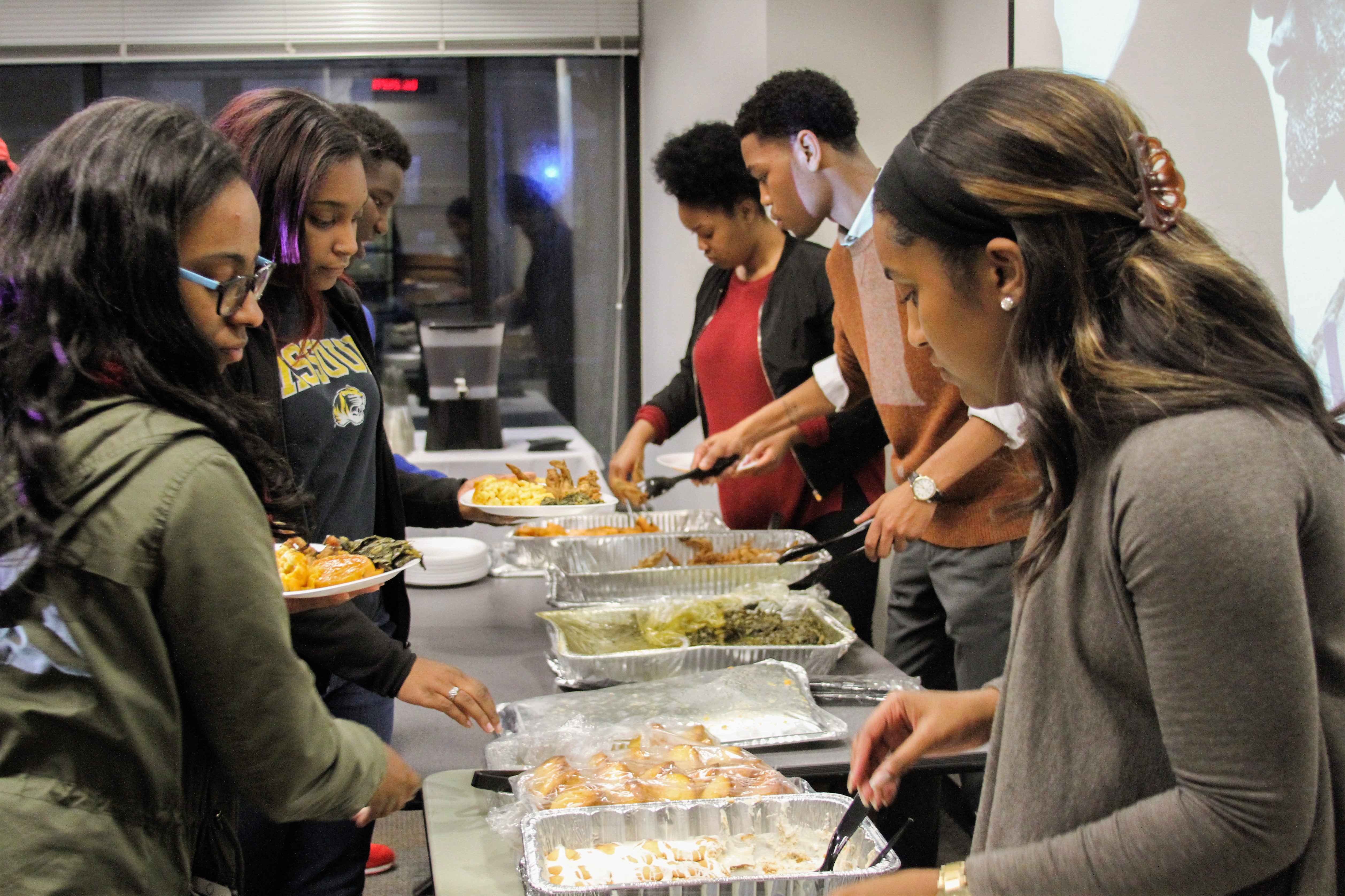 Wednesday was the General body meeting; the E-Board covered topics such as Kid Cudi and mental health in the black community, as well as the arrest of the man who filmed the police killing of Eric Garner. The meeting ended with a game of Bean Boozled which left some participants tearing up, both from laughter and disgust at the jelly bean flavor they had to eat.

On Thursday, a large crowd gathered inside Munroe Hall to get a taste of some good soul food — a rarity on the DePaul’s Lincoln Park campus. In the front of the packed room of roughly 40 or 50 students, there was table full of cornbread, sweet potatoes, macaroni and cheese, fried chicken, greens and homemade banana pudding. A gentle smell of food wafted throughout the room that reminded everyone too deep in conversation the reason they’d come to the slightly cramped room.  Although it was warm inside, it did not feel stifling; rather, it reminded me of when my family would get together for holiday meals, comfortable and enjoying each other’s company. Every few moments people would look to the front of the room, waiting in anticipation for the members of the executive board to announce that it was time to get food.

Lastly on Friday, the pep rally became a BSU rendition of Wild-n’-Out: a popular game style show hosted by Nick Cannon. The two teams first went head-to-head trying to see who could make the other team’s captain laugh and spit out the water they were holding in their mouth. However, there were no comedic geniuses in the competition, and the jokes either produced a slight chuckle, or a cringe. Some girls in the crowd were called out for making fun of one of the team’s lack of comedic talent, and they were peer-pressured into forming a team. The newly formed group then faced off with an all-male group for a few rounds of celebrity impersonations. They imitated Dj Khaled, Kevin Hart, Mike Epps and the late Tommy Ford to name a few.  There were low blows and bad jokes, but some of the funniest moments came from one of the students in the crowd heckling the teams for being unable to both come up with and execute a joke that would earn a laugh. 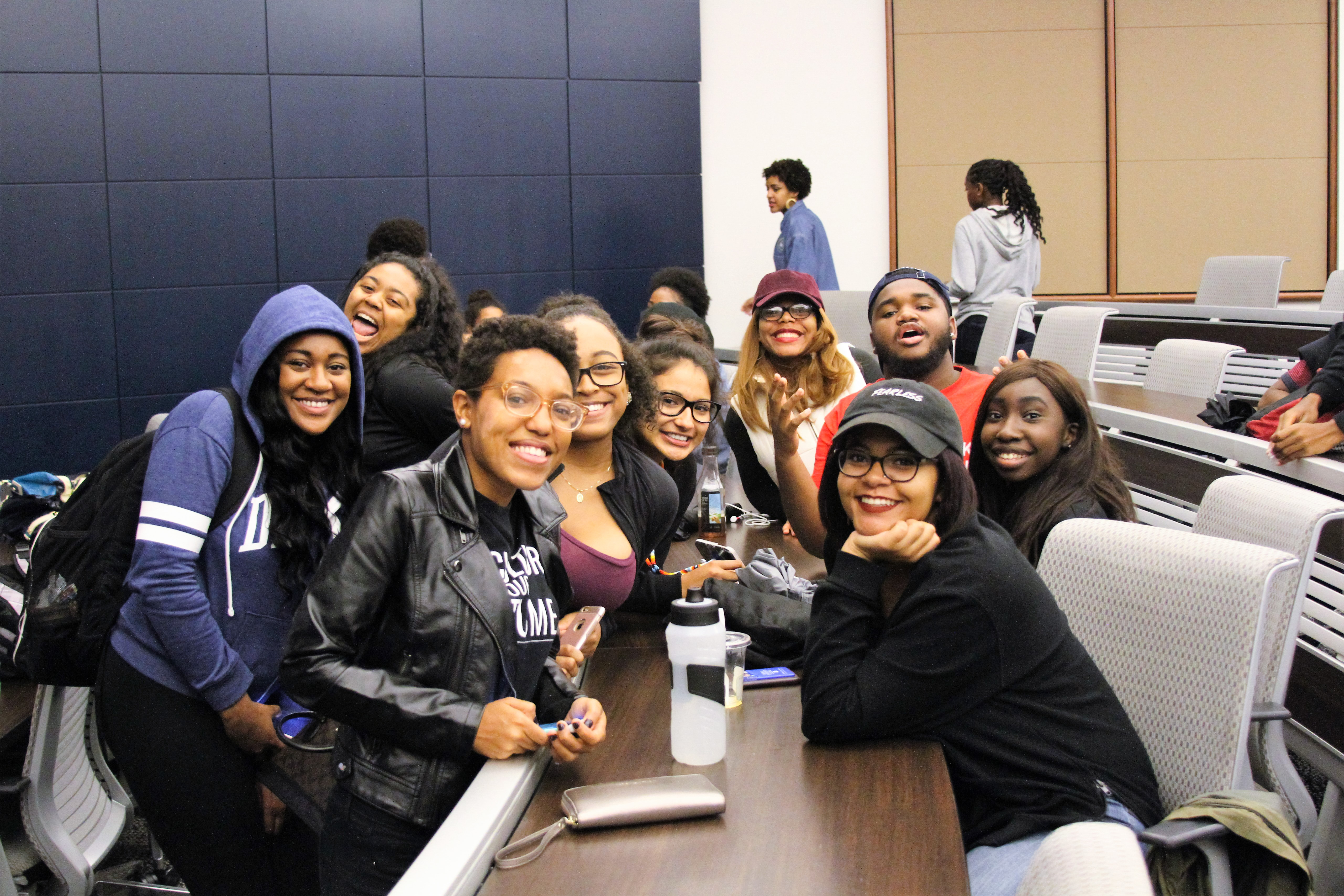 The first annual Black Homecoming was inspired by last year’s Unity Week. It was also driven by both a desire to create a kick-off event for the school year as well as a place for black opinions and thoughts to be heard. DePaul traditionally has its homecoming later in the school year and, according to Palmer, it’s hard for the voices of black students to be heard over the mass of white voices.

“[Black students] don’t’ feel as if we are welcomed in those spaces because they don’t take our feelings or our ideas into account,” she said.

Creating a community is important to the small number of black students in attendance at this school. Events like Black Homecoming forge a sense of togetherness. This idea was emphasized during the soul food dinner on Thursday. There were black students in attendance that I had never met in person or even seen in my time here, and the promise of not only free food but soul food specifically brought them together.

Morrow explained that the BSU E-Board picked that activity because “we all grew up on soul food whether it was seasoned or not, good or not — we all grew up on it.” He continued, saying that “it’s a reminder of home, it’s a reminder of family.” It was a thought that obviously resonated with the full room of black students happily munching on meals from their childhoods.

Black spaces, like Black Homecoming, are not only important for creating friendships and connections; they also serve as a refuge from isolation by their peers both physically through skin color and mentally by the experiences that only black students face.

DePaul University, despite having a mission of inclusion, is a PWI, or a primarily white institution. Morrow calls it an HWI, a historically white institution, to clarify that “DePaul was never made for black people. The idea of college wasn’t made for black students.” Universities and places of higher education in the United States date back to 1636 with the founding of Harvard College — way before the Civil War. In a time when black people were not viewed as human beings, the idea of giving them basic education was out of question, and higher education was merely a fantasy.

More recently, the school has struggled with how it handles and understands its students of color, and that has shaped the community today.

Last year, when Milo Yiannopoulos came to speak at DePaul, the ensuing chaos left a mark long after Milo left our campus. Sophomore BSU member and STRONG executive board member Kiah Sandler said that “[the black community] was a little bit less tense. It was like oh,  [the student body] all knows Trump’s crazy, we’re on the same page with that, but then it was like, oh we are not all on the same page.” She says that it changed her and the black community’s relationship with DePaul.

“Black people, our guard is up. It’s like us versus DePaul,” she said. When the trust in DePaul is wavering and there is an increase in uncertainty about the feelings and stances of the majority population, black people need to find a place of trust, home, and safety. That is why, especially in today’s social climate, black spaces are so necessary.

Separate spaces for black students not only provide refuge but also give the black students at DePaul  strength — a sense of freedom to be an individual rather than being labeled. 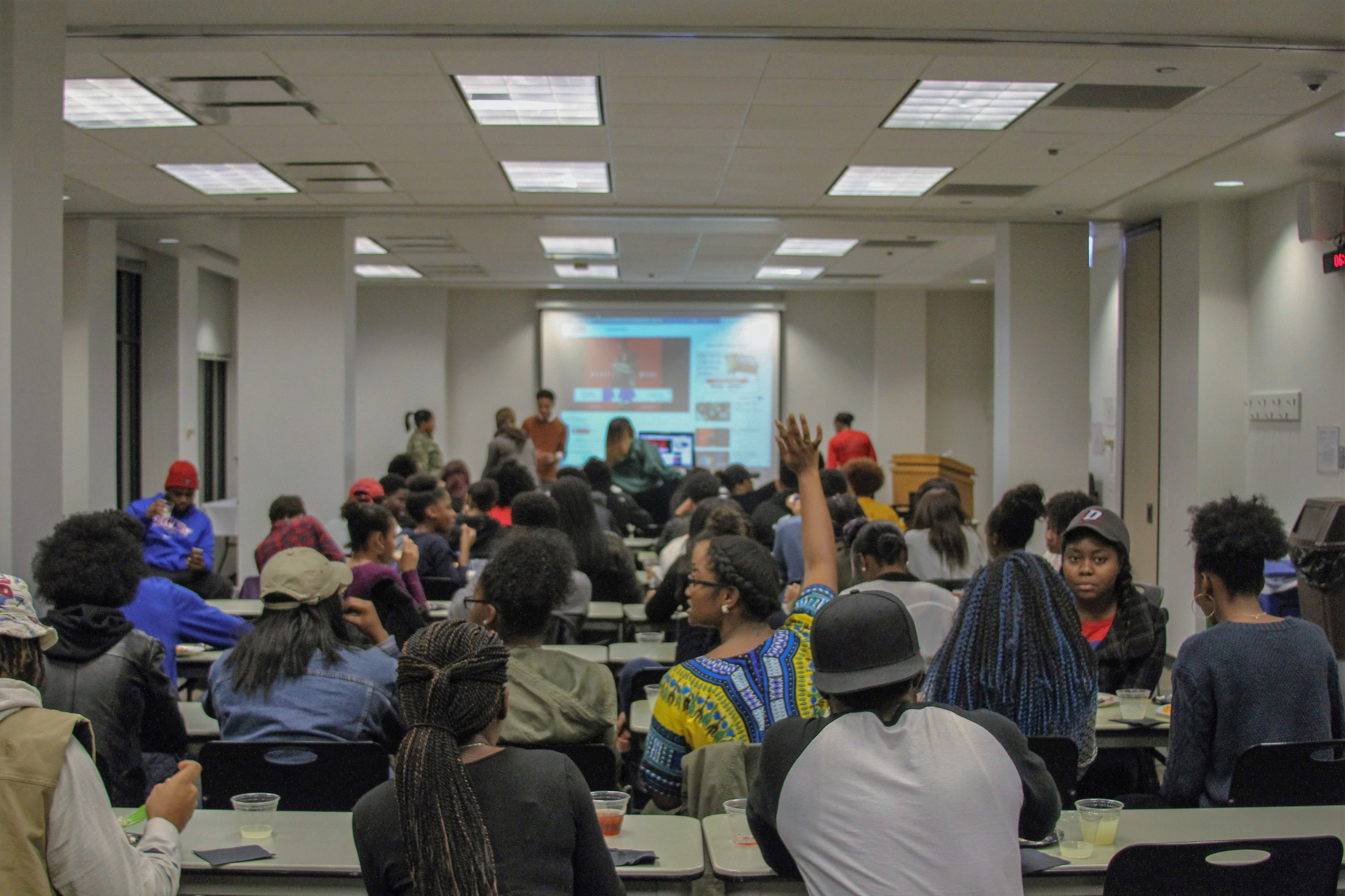 Zoe Ihaza, a long-time member of black organizations, grew up surrounded by black people and experienced some culture shock upon arriving at DePaul this year, and so she sought out black spaces and groups because she feels that “surrounding yourself by people like yourself is very empowering.”

Palmer went searching for the freedom to be her own individual. “There are people out there who see you as just another black girl, and they categorize you, and I hate that — with a passion,” she said.

The most important role of a black space is to ultimately create a community that provides a stable foundation that an individual can use to grow stronger and lean on when they are weak. The people in that space can become some of your closest friends, and in sophomore, BSU member and STRONG executive board member N’Dea Stadler’s opinion, “it helps you build your family.”

For those who say black spaces and events like Black Homecoming are exclusionary let Morrow remind you that “anywhere I go, no matter where I go, it will not always be black,” and everyone, no matter what race, wants a place where their voice can be heard, where their opinion matters, where they feel safe and where they have a sense of community.

Black Homecoming created such a space, and hopefully there are many more in future years. It is important for the black students of DePaul to, as Stadler says, “get together, stick together, stay together.”