He applies glue to his eyebrows first. Slicking them down, he makes sure the glue stick presses every hair to his brow bone so that he can cover them with foundation. This isn’t a necessarily hard task for Patrick, as his eyebrows are thin, but it’s rather important for a successful look.

Next is a base coat of foundation. He laments about his first experiments with store-bought makeup, which starts to smear after an hour. It was the heavy cream based foundation that he would apply for plays and musicals in high school that worked the best. The infamous contour was next. Patrick contoured his face with the darkest brown shade he could find – “like leaves in the gutter,” he said. Around his forehead and the “apple” of his cheekbones, up and down his neck, chin, and lips, he traced lines that didn’t seem to be there.

No contour is complete without a highlight. “It’s like when you have the best lighting for a photo,” he said with a smile on his face.

Patrick Pfohl started watching “RuPaul’s Drag Race” his junior year of high school. It wasn’t until his senior year that he, with the help of his friend Valerie, tried out drag. His black wig from a costume years ago whipped in the wind from the passenger’s seat of Valerie’s burgundy Taurus in Arlington Heights, Illinois. He was in Valerie’s show choir dress. They went to the Dunkin Donuts drive-thru.

Patrick looks back on the first time he tried drag in appropriative horror, embarrassed that he once used that same wig as part of a geisha ensemble for Halloween.

When it comes to eyes: “the bigger, honestly, the better.” He returns to the importance of the glue. Without the important first step of the glue, his look could be ruined by now with bits of peeling glue and tiny hairs poking through the canvas he has created. His eyeshadow is allegedly his greatest weakness, combining colors into the dark and light hues of makeup, stretching from the bridge of his nose past his glued (and now invisible) eyebrows. He applies false lashes on his top lids and then smaller ones to match on the bottom.

Patrick performed at the Student Drag Show at DePaul his freshman, sophomore and junior years. In his senior year, he feels like he has changed as a student, and as a drag performer. “As a freshman – I hate slut shaming, but – I was dressed like a slut. I wore a string bikini type-thing and a disco dress,” he scoffs to himself. “Now I’m into detailed, vintage looks and I like everything to look more cohesive.”

He applies the matte lipstick to his lips, rambling about having very little “real estate” between his upper lip and his nose, perfecting his new mouth with every stroke. He starts to add blush to accentuate the contour, adding another layer to a transformed face. A sparkly powder helps set the makeup as he continues to add the finishing touches on his contour. Patrick sprays hairspray in front of him and walks through it with his eyes closed. He puts on his wig.

He is now Lemon. Just Lemon, no last name. “One word is more iconic.” 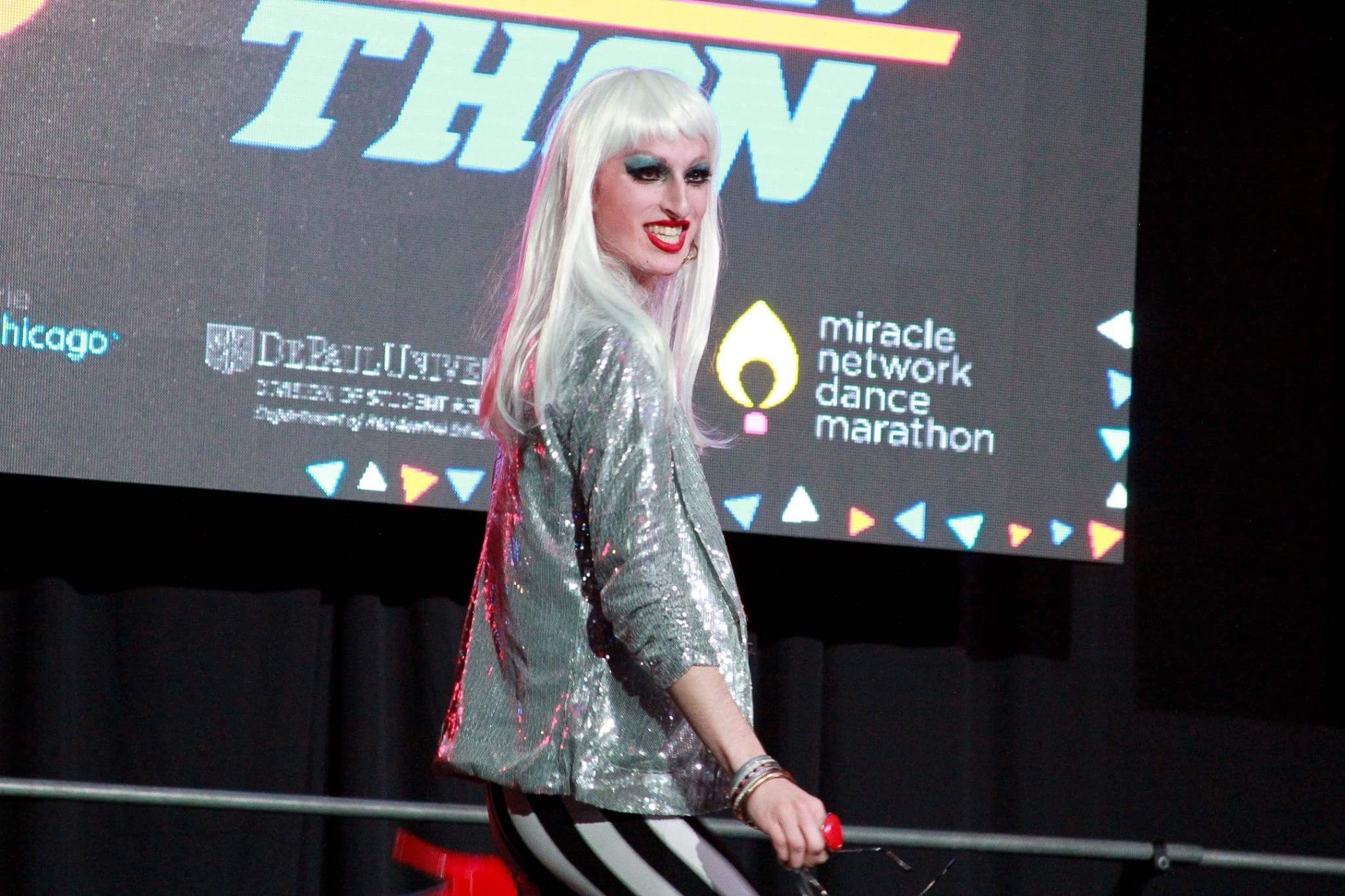 “It was Alaska’s season to win.” Alaska Thunderf*** was crowned last week in the season finale of “RuPaul’s Drag Race: All Stars” to the delight of many, and the dismay of some. It was Season three of “Drag Race” that Patrick first watched all the way through and he says it served as his “inspiration.”

“Drag Race,” and media like it, have become synonymous with gay culture in the 21st century. But with growing visibility and celebration, the right to queendom has been dragged to and fro, with a lot of push back.

Merriam-Webster defines “Drag Queen” as “a male homosexual who dresses as a woman especially for comic or theatrical effect.” Patrick disagrees. “Now the way that I see drag going is – it’s an understanding that there’s no clear lines to what gender is and that’s all just made up. It’s a way to control people and put them in boxes. So, what I love about drag is there are so many people that can do it, it’s not just a gay man thing anymore.”

There are groups of people who disagree with Patrick. Their argument is that drag is a tradition for the gay, male community. “That’s stupid,” Patrick said. “You’re making fun of gender by performing in this way, but then you’re putting people even more so into boxes by saying ‘you are this gender’ or ‘you have this genitalia,’ so you can’t do drag. It doesn’t make sense.”

Eruptions of anger found their way into the homes of some RuPaul fans during season 5 when drag queen Monica Beverly Hillz came out as transgender and was promptly sent home the next week. Perhaps her lip-sync was not up to Ru’s standards at the end of the episode, but some believed that her identity interfered with her participation in the competition. In an article written by Julieanne Smolinski in 2013 on Logo’s pop culture blog, Smolinksi writes that she appreciates “her candor and her strength, but… That’s kind of cheating, right? I feel like that’s definitely cheating.”

Cassandra Kendall, a senior at The Theatre School at DePaul, agrees with Patrick. “My drag persona is a chance to live out my tomboy and hyper girlie fantasies,” Cassandra said. “I know there is some tension in the drag community towards drag kings and especially bio queens (females who dress up as drag queens), but I think that all drag stems from the same thing, a chance to live out a side of yourself that you don’t get to on a daily basis. I feel more celebrated in spaces with younger audiences than I do with older people, but it just pushes me to work that much harder to prove that my forms of drag are just as great as drag queens.”

Cassandra is developing three personas at the moment. Luc Ami, Cassandra’s “sexy and comedic French drag king persona,” has been taking up most of her time lately. But Ibiza Tiza is her electronic dance music, party girl bio queen persona and Justin Right is her “frat boy” drag king persona.

Drag Race influenced Cassandra’s interest in drag, but it was another show that thrust Cassandra into the drag world. “For my 18th birthday, my friends and I went to a live screening of Rocky Horror. I was really intrigued by Frank-N-Furter and loved that he was a character that was created to celebrate having an identity in a transitional state, he didn’t need to be a fully male or female person.”

“I’m not an overtly sexual person, so Luc allows me to explore that side of myself while also sharing my love of dance.”

After three layers of tights to cover her leg hair and the uncomfortable process of ‘tucking’ with duct tape, Lemon is all set to perform. She prefers to lip sync to Lady Gaga’s rendition of the National Anthem or Gaga’s “Venus” or “Summer Boy” by Lady Gaga. Lemon is a Lady Gaga fan.

It usually takes about two hours to go from Patrick, the sweet boy with a wool, printed sweater over a denim collared shirt, curly brown hair, and an inviting smile, to Lemon, who is “a bitch and a mess.”

“Once you are able to kind of put yourself out of your comfort zone, it helps you be even more like yourself that you thought you could be.”

As a volunteer for Equality Illinois, I feel it’s important to mention that Dragapalooza, a two-night performance of drag and burlesque, will be held October 26 and 27 at Sidetrack the Video Bar to benefit Equality Illinois, the state’s largest and oldest LGBT advocacy organization. Information and tickets at: equalityillinois.org/dragapalooza