It is like October happened in the course of a blink. I barely even noticed it was there. I was too busy to notice. And for that I feel guilty, because October is my favorite month. The weather: the crisp cold that isn’t too cold. Sweaters and long awaited hot coffee. And of course, Halloween. It is the one time of year I don’t have to be ashamed of my love of horror, the haunted and all things death. It is the one time of year my guilty pleasure doesn’t feel so guilty.

But the old, the vintage, the haunted and dead are certainly one of my stranger guilty pleasures, and it is year round. I cannot even begin to describe what makes death so fascinating. Maybe something is wrong with me. Or maybe — just maybe — something like a good horror film or a good ghost story gives me the taste without any of the danger. I get to look death in the face and not feel afraid. And that’s a good feeling, knowing that one day I might be nothing more than a faceless person in an old photograph someone dumped in an antique shop, surrounded by other forgotten photos just like mine. 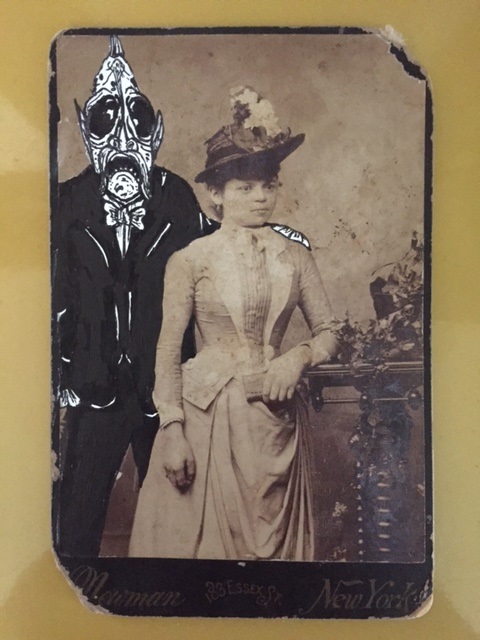 That is, until someone comes along and finds me. Someone like Sydney Kosgard, resident 14 East illustrator and my long time roommate.

I came home one day to Kosgard painting over front of an old photograph. She had been collecting old family photos from antique shops and adding her own element to each one. It was not an act of destruction, but rather an act of contribution. She made each photo lively or humorous in a way it wasn’t before.

“The inspiration is usually just imagining a scenario that would fit the expression or mood of the photo,” Kosgard said of her work.

I once watched her paint insect faces over top of the family member’s faces while we were at a cafe in Lakeview. I was gorging on an omelet while she was creating intriguing art. I was hooked, but she was guilty.

“I’m afraid that one day someone is going to see these and recognize their relatives, and I have offended them by painting over them,” Kosgard said. 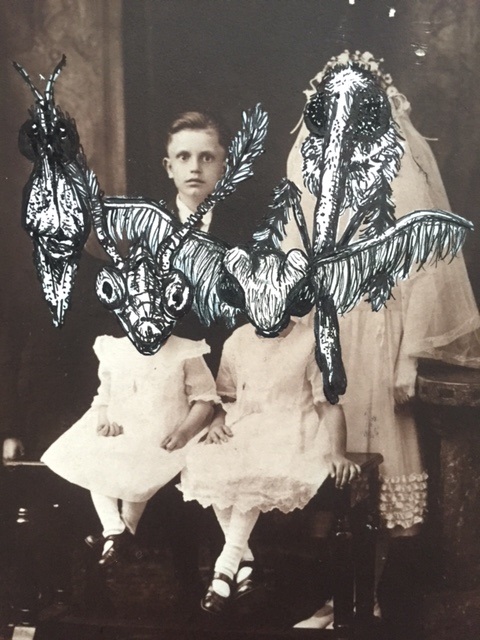 I assured her that it was highly unlikely that would happen. Besides, these people dumped their photos at an antique shop. I didn’t think they would be missed. Kosgard is breathing life into these photographs. She really enjoys doing it, but the guilt is still there. That does not stop her.

Now, thirteen of these artworks are hanging up in our dining room. Kosgard and I thought it might be creepy in a sense to hang up pictures of dead people in our home, but, at the same time, we love them. And maybe we should feel guilty, dishonoring the dead. But as I think about myself, long dead, and all that’s left of me is in an overstuffed box on the floor of a dusty shop, there is nothing I would love more than to be reborn as a work of art.