The Legacy of the Lincoln ’11’

The Legacy of the Lincoln ’11’

If each street has its own brand, then Lincoln Avenue missed out – some areas are like Main Street of a ghost town, the long forgotten stretches of history in a textbook. A diagonal corridor carrying its residents Northwest and Southeast, the 11 bus on Lincoln Avenue went where strictly East and West bound buses could not. Closely following the route of the Brown Line, the street has both commercial and residential pockets, just as any other. While some train stops could set you down and pick you up on the best of Lincoln Avenue’s thoroughfare, others couldn’t. Residents living in areas like West Lakeview, not far from DePaul’s Lincoln Park campus, relied on the 11 bus to carry them peacefully throughout their home corridor, whether it was to work, school or play.

As of Sept. 1, the 11 bus has officially been demoted, retreating back to its previous route on the North Side between the Howard CTA station and the Western Brown line station. Brought back as a pilot test, the extended 11 bus route ran from 10 a.m. until 7 p.m. Monday through Friday, starting in June 2016 up until Sept. 1, 2017. Many in the neighborhoods off Lincoln believed CTA set up the pilot to fail, as service was not offered during weekday morning rush for commutes, or on weekends for wandering the local shops and restaurants scattered down Lincoln. 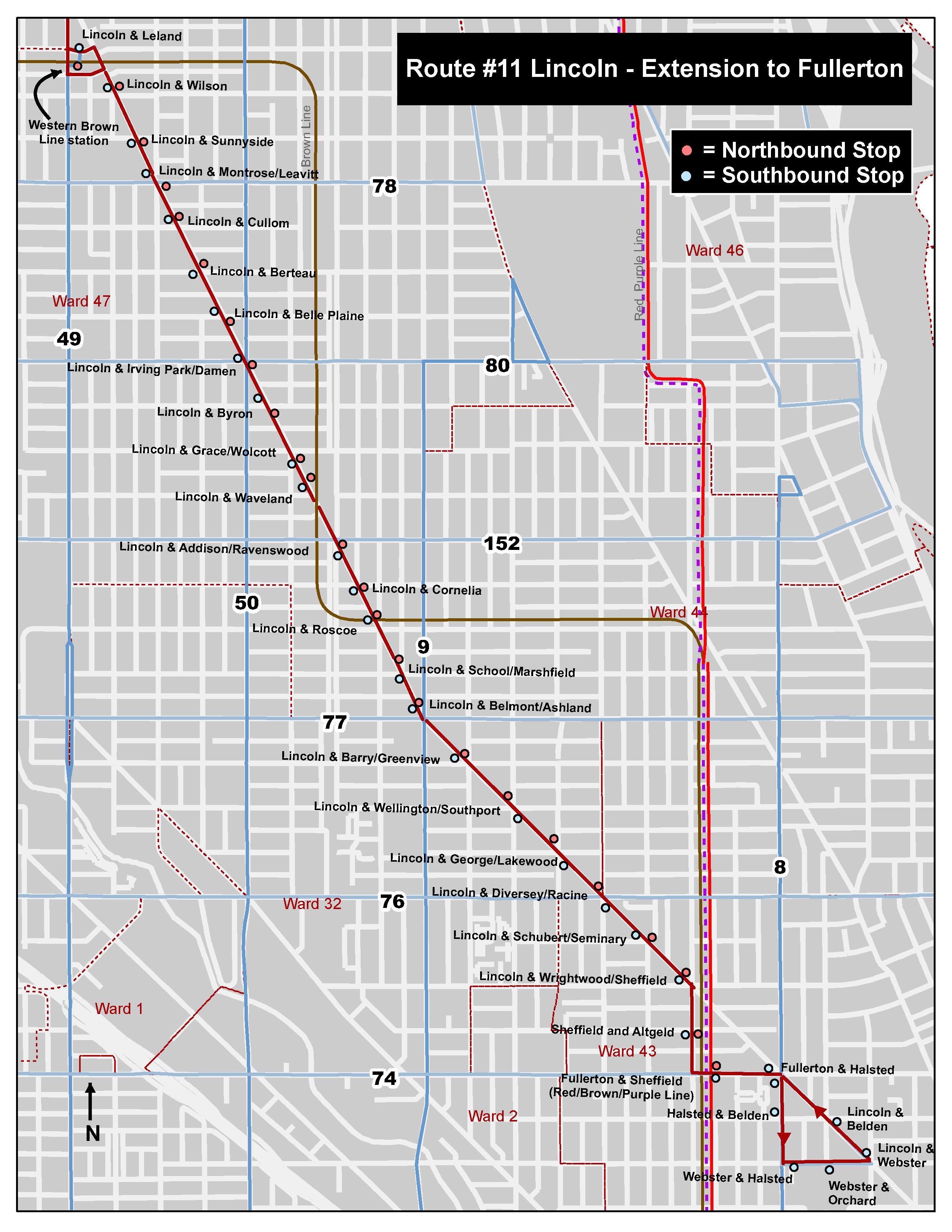 In the absence of the 11 bus, many DePaul students living in the West Lakeview area are left without a direct route to campus. While previously dropped off directly at the Fullerton CTA station, some students are now left walking nearly 30 minutes to get to DePaul’s Lincoln Park campus. Roommates Amy Hildebrand and Morgan Harvey, DePaul seniors, live in West Lakeview near the intersection of Lincoln/Wellington/Southport, approximately a 20-minute walk from the John T. Richardson library in Lincoln Park.

“The 11 bus was [the] household’s lifeline,” Hildebrand said. “It got us to campus in less than 10 minutes – we’re exactly a mile away, which is manageable, but absolutely awful during the winter or in otherwise inclement weather. Since it cut my commute in half I could run home to quickly eat or spend 10 minutes in quiet silence between classes.”

“I was unable to take this bus to morning classes, as it never came earlier than 10 a.m.,” O’Malley said. “I couldn’t catch it home from evening classes or work either. It seems to me that this awkward time frame resulted in many folks being unable to rely on the Lincoln bus to consistently get them to or from school or their day jobs. Other CTA buses don’t have schedules like that, so how can accurate and reliable data be collected?”

This question echoes in many of the local businesses along Lincoln Avenue as well. Neighborhood chambers of commerce in Lincoln Park, Lakeview, North Center and Lincoln Square-Ravenswood had all stepped up in the past to support the 11 bus route. The original route was first eliminated in 2012 to roars of frustration from residents, but this community pressure eventually prompted CTA to return the bus service to its pilot trial run in June 2016.

Alderman Ameya Pawar (47th) was one of the leading advocates of the bus, citing fears from local businesses worried about their future without direct public transportation nearby. 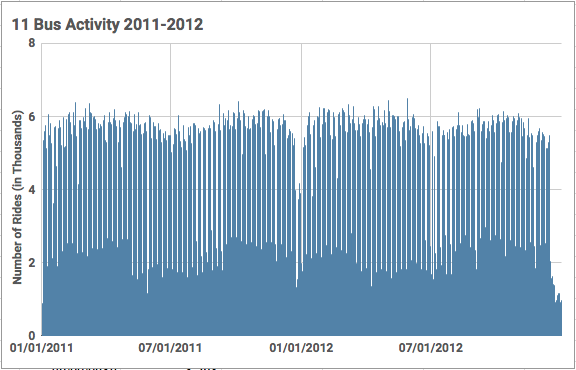 Ridership on the 11 Bus between 2011 and 2012, data courtesy of City of Chicago (graphic by Cody Corrall)

“We would have loved for the 11 Lincoln bus to have succeeded, and we worked to promote the pilot program,” said Robin Hammond, director of marketing and communications at the Lincoln Park Chamber of Commerce. “Unfortunately, without service during the morning commutes, we weren’t sure if it would be able to survive.”

Tammy Chase, CTA spokeswoman, says that the decision to cut the extension was made after collecting and evaluating more than a year’s worth of ridership data. 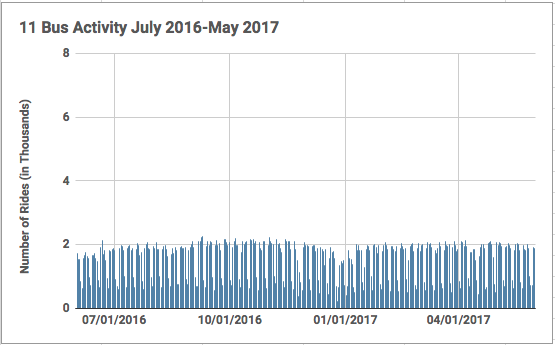 Ridership on the 11 Bus during the pilot testing period between July 2016 and May 2017. Data courtesy of City of Chicago (graphic by Cody Corrall)

“The demand for the route simply wasn’t anywhere near what was needed to sustain a route of this kind, averaging about 500 riders per day compared with the target of 1,500,” Chase said in a DNAinfo article in August of this year, adding that the pilot cost the agency nearly $1 million.

While some pockets along Lincoln remain vibrant due to their proximity to the Brown Line, West Lakeview now remains approximately a 20-minute walk from any CTA. According to Michael Salvatore, owner of Heritage Bicycles and Coffee on Lincoln Avenue near the intersection of Wellington and Southport, local politicians and the Lakeview Chamber of Commerce didn’t put forth the same effort as other Lincoln Avenue communities. 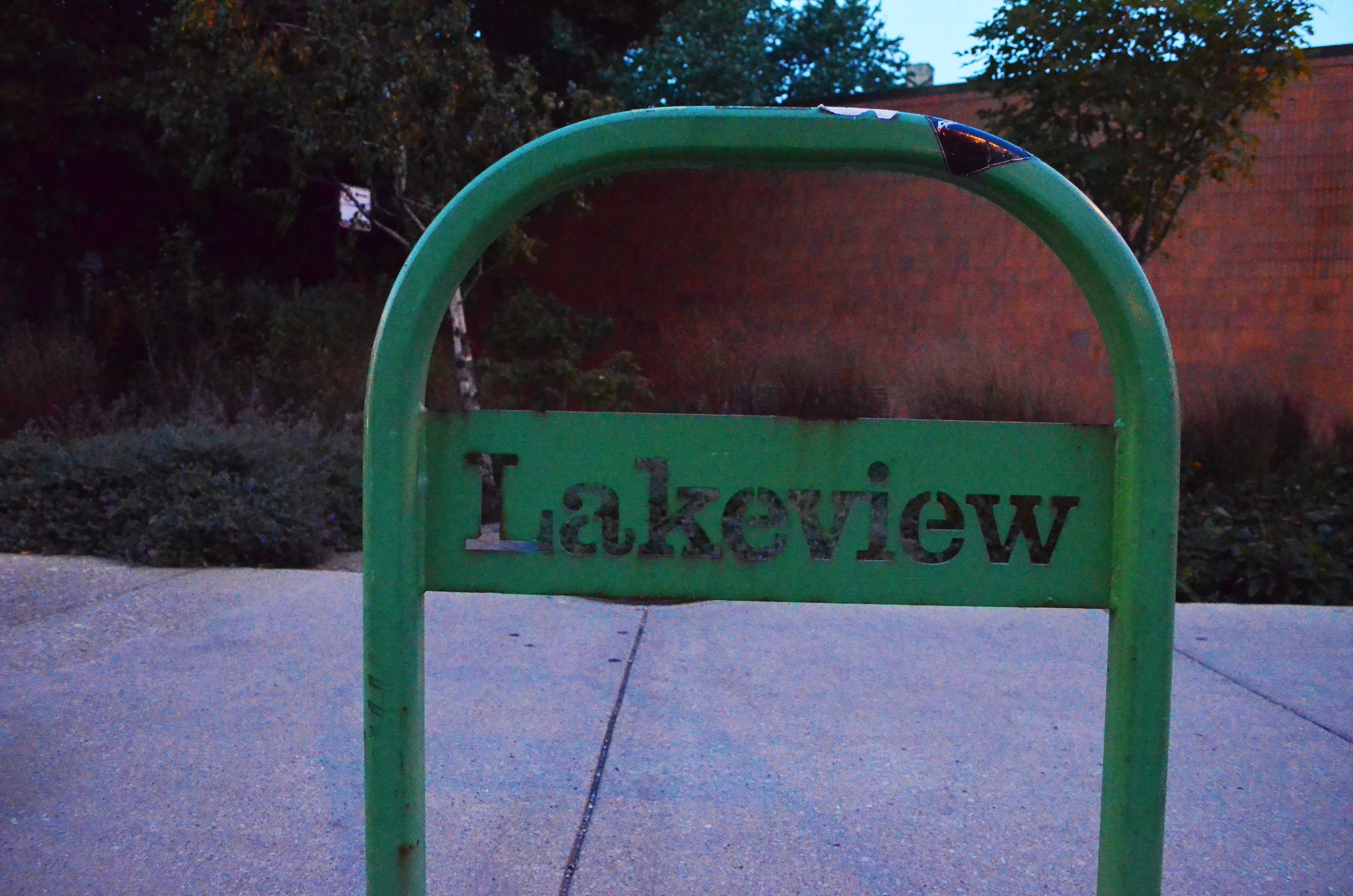 “I think there’s a sense that we’ve been forgotten,” Salvatore said. “The city has decided not to invest their time or energy into West Lakeview, Lincoln Avenue. You see a lot of stores closing, you’ll see a lot of empty storefronts, and you’ll see a lot more in the coming years. It’s hard to sell a block that doesn’t have access to public transportation – it’s a double-edged sword.”

Heritage is one of few local coffee shops for DePaul students to study off-campus while remaining nearby, and employed a handful of DePaul students in the past as well. When originally hunting for a location for Heritage in 2011, most of Salvatore’s friends warned against Lincoln Avenue, citing lack of access and lack of a neighborhood. Salvatore decided against these warnings ultimately because he fell in love with the storefront space available to him on Lincoln. “It was a gut instinct,” he said. Now 6 years after opening, Salvatore has found a local home on Lincoln – but without the bus route bringing in potential new customers, he acknowledges the weight that will take when it comes time to re-evaluate his lease.

“It’s hard to chip away little pieces when there’s one big obstacle in your way,” Salvatore said. “In general, Lincoln Avenue between Diversey and Belmont is one of the most unique spots in Chicago. It’s home to a lot of mom-and-pop shops, which I think is unique now.”

Even the Lincoln Avenue hub in Lincoln Park is filled with mostly local storefronts, like Victory Gardens Theater, Clarke’s Biograph Diner and Lincoln Hall. Moving Northwest up to the Golden Apple Diner in West Lakeview, Dinkel’s Bakery on the Roscoe Village border and the Davis movie theater and Old Town School of Folk Music in Lincoln Square – Lincoln Avenue offers a wide range of local thoroughfare. However, places like Whole Foods have recently popped up on Ashland on the intersection with Lincoln and Belmont.

“If you wanna really support your local mom-and-pop shop, you want your money to go to people who are feeding their families, who send their kids to school in Chicago, I think that Lincoln Avenue is a prime example of what that is and what that should be,” Salvatore said.
Lincoln Avenue hasn’t given up quite yet, though – there will be a Fall Beer Crawl this Saturday on a 2-mile stretch of the street, starting at Beermiscuous in West Lakeview.

Correction: This article has been updated to show that Elle O’Malley lives with Morgan Harvey and Amy Hildebrand, as opposed to living a little further away.