Why Some Chicago Homeless Choo..

Dozens of people mingled and drank free Baderbräu beer on a brisk November night as they surveyed framed black-and-white screen prints celebrating the 150th birthday of one of the world’s most well-known architects, in one of Chicago’s fastest-growing neighborhoods.

Not too long ago, a furniture resale shop occupied All Star Press (2775 N. Milwaukee Ave.), an art gallery that sits near the corner of Milwaukee and Diversey avenues. But on this Saturday, the Logan Square spot dedicated in large part to screen-printed sports jerseys kept its doors open until late at night to showcase a Frank Lloyd Wright collection.

Tasseff-Elenkoff, a 34-year-old father who often sports a mohawk, is a School of the Art Institute of Chicago graduate, born to nomadic jewelry makers, raised in and around the art scenes of Paris and London. “I grew up going to galleries on a regular basis, and I hated it,” he said. “I hated it because they are normally very stuffy and elitist, and not the most friendly places to walk into. As an artist, I never wanted to be part of the fine art gallery scene.”

The sports-focused All Star Press opened in June, his latest counter to the aspects of the art world he despises. It’s a concept the European football-obsessed artist believes deep down could one day span the globe.

Tasseff-Elenkoff started All Star Press because he is deeply invested in the subject matter and enjoys working with a tight-knit crew. All Star Press’ proprietor also understands sports to be “mega.” He knows he has the talent and drive to succeed in a market typically bereft of skill and style.

“This is just my opinion, most sports-related artwork is sh** [sic],” Tasseff-Elenkoff said. “Sports are separated from art, especially in America. There is some resentment between the two, and because of that, there is no one else doing it.” 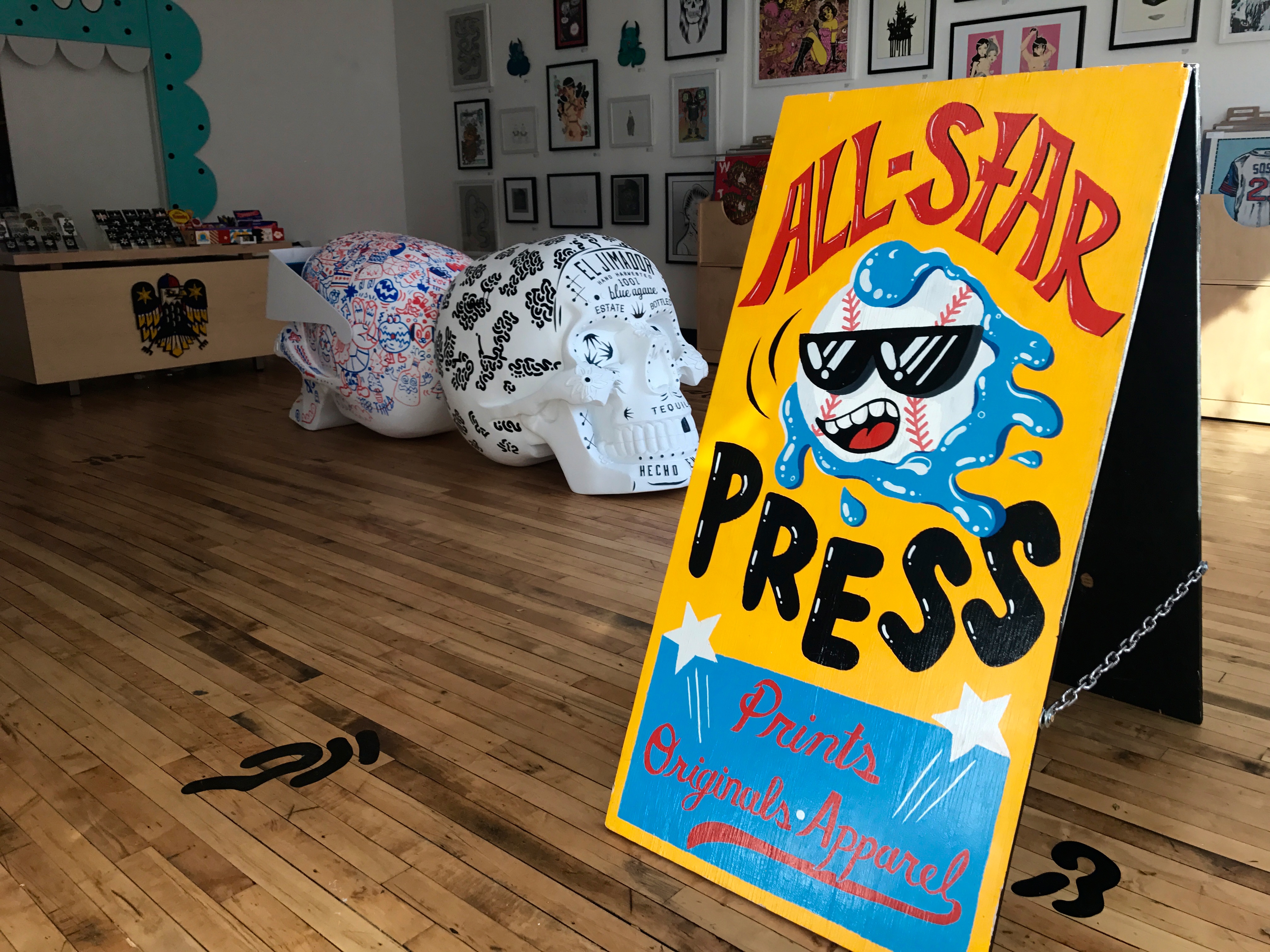 Tasseff-Elenkoff designs, prints and sells a plethora of colorful, 18″x24″ screen-printed jerseys from Pelé to Michael Jordan, as well as a range of MLB, NBA, NFL, NHL and soccer stars. The co-founder, and former curator and head printer of Chicago’s widely popular Galerie F, sought to meld art and sports — two culture-shaping but sparingly fused pastimes.

The Galerie F co-founder worked a ton of 12- to 14-hour days over a roughly four-year period, churning out everything from band gig posters to more fine art prints. “We created a homegrown retail gallery space that is now one of the best known kind of street, pop art spaces in the country, and we did all of that on a shoestring budget,” Tasseff-Elenkoff said. “But our dynamic grew contentious over the years.”

Aside from his share of the business, he took with him the somewhat grungy quality and sensibility of the screen-printed pop art he gravitated toward as a teenager in South East London.

Tasseff-Elenkoff also watched MLB games until the early morning hours as a youth, can rattle off 1990s NHL rosters with ease and still sometimes lingers over the Allen Iverson-led ’76ers 2001 NBA Finals defeat.

Yet, the soccer club Tasseff-Elenkoff supported as a kid, Tottenham Hotspur F.C., will always have his heart – and now his early weekend mornings due to the time difference.

Today, the London-based club, for years a middling Premier League side, teeters on transforming into a European giant that plays beautiful soccer, due in large part to hardworking world-class talent and a low-key manager. Tasseff-Elenkoff’s business, like the club he supports, is also fluid and constantly evolving.

Along with sporting icons, Tasseff-Elenkoff’s new retail business features an array of pop culture and band prints as well as works from other artists. Conversations at All Star Press can seamlessly flow from the Spawn comic books to global soccer finances as The Clash plays in the background.

In fact, All Star Press isn’t even listed on any official business license, nor is it how he makes most of his money. “I currently make a living in gig posters and printing work for other people,” he said.

Tasseff-Elenkoff started Fugscreens Studios, which is the officially taxable business, in his basement shortly after he graduated from college in spring 2006. Although Fugscreens moved into an official space years ago, his studio now occupies about 80 percent of the new Logan Square location. This includes a basement that spans the length of the main floor.

Bands from Muse to Against Me! have commissioned Fugscreens to create gig posters. The studio also works with artists to print and sell their work on either a wholesale or consignment basis. On top of that, four local artists rent studio space that takes up about half the basement. This is all part of a multifaceted business model that Tasseff-Elenkoff sees as key to his sustainability.

Tasseff-Elenkoff estimates that he works with roughly 10 suppliers on a regular basis, for the medley of different papers, paints, screen-printing chemicals and inks. Fugscreens buys wholesale from suppliers such as Speedball, Lewis Paper, Midland Paper, Nazdar and Uline. Luckily, most suppliers do next-day delivery, as the studio is seemingly always overbooked — which he believes is due to his desire to take on too many projects.

Although Fugscreens/All Star Press is practically a nano business, Tasseff-Elenkoff does employ a few people, only one of whom is full-time.

Sasha Perez began her job as All Star Press’ gallery director a month before it opened. The fellow SAIC graduate manages the retail space the five days a week it is open — Wednesday through Sunday.

After spending time at a Chicago fine art gallery, she relishes the change. “I love seeing paints,” she said. “I love the mess. It’s just real, working with artists and collaborating with them.”

On a daily basis, Perez interacts with customers, makes recommendations, runs the stores’ social media accounts, develops online marketing and more. “I basically try to hold the ground,” she said. “Making sure the day-to-day operations run smoothly, making sure artists and clients are happy.”

Perez, a Miami native who loves basketball and hockey, works with All Star Press’ Shopify-based e-commerce platform to monitor inventory and make sure all online orders are fulfilled and shipped via UPS about once a week.

Building relationships with other small business is vital as well and has become something Perez strives to cultivate. Trinidad Garcia, the owner and head instructor of Unanimous Boxing Gym — located directly across the street — and his trainers sometimes sport black All Star Press hats and shirts. The owner of the salon a couple doors down often sends her customers in while they wait.

“I think we are always constantly surprised about the growth,” Perez said. “But making these small business connections is a way to remain sustainable in a big city.”

Along with Perez, Siobhan Kealy acts as the self-described “man behind the screen.” Kealy, who is currently working towards an art therapy degree, is Fugscreens’ most senior printer and has worked for Tasseff-Elenkoff since she was 18.

Now 25, she also co-opts Tasseff-Elenkoff’s affinity for a screen printing mentality that allows multimillion-dollar Warhols to feel imperfect and ragged. “The print world is much more accepting than the art world as a whole, much more DIY,” Kealy said.

The combination of Kealy, her printing partner Eric Wolfgang and Tasseff-Elenkoff physically print almost 100 percent of all the art sold in the retail space and online via the All Star Press and Fugscreens websites.

All Star Press also hosts a new gallery show roughly once a month, something that Tasseff-Elenkoff sought to curb when he opened, as the stress of the near-constant Galerie F shows took their toll. But the exposure and hype that new openings generate proved too advantageous to pass up.

The most recent showcase opened on Nov. 18 and featured 14 of Kate Lewis’ black and white depictions of some of Frank Lloyd Wright’s most famous works. Aside from her gallery, Lewis is also one of a few of Fugscreens’ exclusive artists.

“I don’t have to worry about the marketing, it’s just like I make it, and then he does the rest,” Lewis said. “My website links directly to their site and he does all the order fulfillment. He takes the reins. It’s like an artist’s dream.”

Six months in, Tasseff-Elenkoff says the new spot is meeting its sales goals, and he noticed an uptick over the last month. But he has also encountered struggles and unexpected hurdles, which include an audit of Fugscreens 2015 financials by the IRS, which helped hamper plans to expand his staff.

Tasseff-Elenkoff paid for a little bit of public relations and marketing out of the gates. But funds were not available to help get his new website at the top of search engine results. “I know what I want, and I know I can get myself to the next level, but things have gotten in the way of that,” he said. “Some my doing, some other people’s doing.”

Still, the Tottenham supporter feels he can compete at the top of his game at all times, and in turn he strives for the people he surrounds himself with to perform up to those lofty standards.

Beyond the current mainstream jersey prints, he aspires to design and print other notable sports garments and create sports-based gig posters. In the short run, he plans to keep All Star Press open six days a week as soon as he can afford to, though his printing business already rarely rests.

Tasseff-Elenkoff believes that his new sports-focused retail concept, built around screen-printed jerseys, has the potential to become immensely popular. But at the moment, it is all about getting in front of the right people in order to convince them. He is currently in talks with the Chicago Bulls, Cubs, Blackhawks and Bears as well as home decor retailer Home Goods to work out selling jersey prints.

Yet, what might remain paramount to global pop art dominance is the maintenance of the mentality that keeps Tasseff-Elenkoff’s printmaking diverse and inclusive.

“This place needs to be affordable and accessible to working class people and middle class people,” he said.