Production of hemp, the plant marijuana comes from, was once not only legal in the United States, but encouraged. In 1619, every farmer was required to grow hemp under legislation from the Virginia Assembly.

This is just one of the reasons why DePaul senior Akemi Almeida supports the legalization of recreational marijuana in Illinois. A transfer student and commuter living in the Elgin suburban area, Almeida is the vice president of DePaul’s chapter of Students for Sensible Drug Policy (SSDP). The organization says its members “neither condemn nor condone drug use.” SSDP hosts events with a focus on harm reduction and education for drug use, as well as the occasional movie night.

This week, on Monday, January 8, SSDP hosted a panel and Q&A session about legalization of marijuana in Illinois in the Levan 100 auditorium, on the first floor of the Schmitt Academic Center. This comes as an amendment to Senate Bill 316 in Illinois has proposed that marijuana should be regulated and taxed in “a manner similar to alcohol” for people over 21, and would legalize the possession of up to 28 grams of marijuana.

The panelists included bill sponsor state Sen. Heather Steans (D-7th), Bret Bender of the Marijuana Policy Project and Stevie Valles of Chicago Votes. After brief introductions and discussion of the bill, the room was opened up to questions. With an attendance of around 60 people, students and community members alike had questions that covered ground from nuanced policy outcomes to worries over stigmatization. 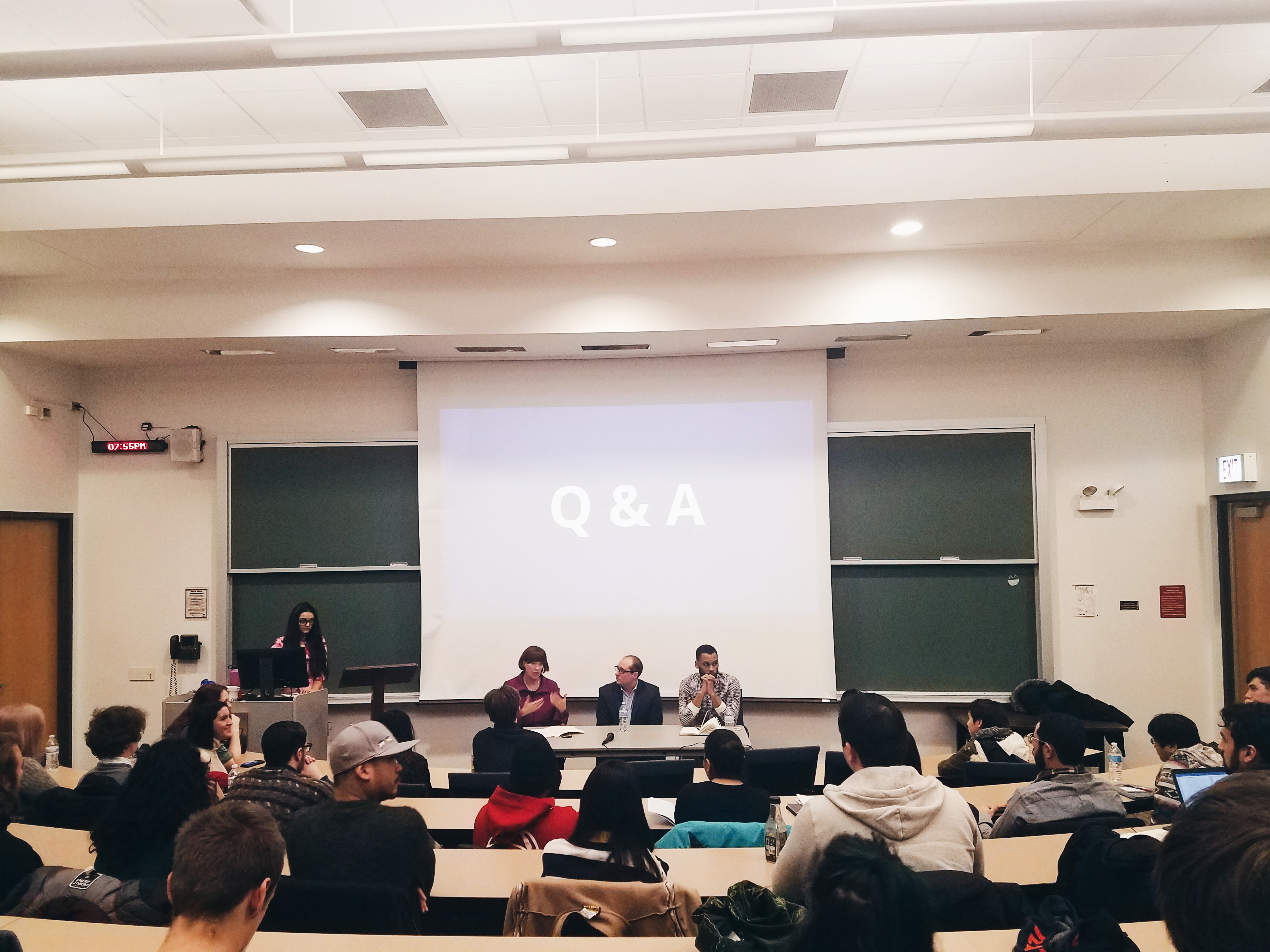 “For me, this is kind of a big day,” Almeida said. “This is really cool that we’re having a senator come and speak about cannabis on a college campus in Illinois. This is weird; this is like history happening. I’m just trying to wrap my head around it.”

Monday’s event was also in the shadow of national news: the week prior, on January 4, Attorney General Jeff Sessions rescinded the “Cole Memo,” an Obama-era policy that provided a relaxed guidance for prosecution of marijuana-related crime and how to enforce this under the Controlled Substances Act (CSA). The policy narrowed CSA’s scope to specific instances for law enforcement, such as to prevent the distribution of marijuana to minors and larger drug cartels.

As a result, legal marijuana was allowed to flourish over the last few years because federal prosecution was officially set as a low priority. Now that this memo has been rescinded, prosecutors are able to more freely and frequently enforce marijuana prohibition – even in states where recreational use is legal, such as Washington, California and Colorado. Marijuana is still classified as a Schedule I controlled substance under federal law.

“These statutes reflect Congress’s determination that marijuana is a dangerous drug and that marijuana activity is a serious crime,” Sessions wrote in the January 4 memo. Sessions’ memo makes it possible for federal prosecutors to now enforce marijuana prohibition and prosecute the crime regardless of state-level legality – and despite strong public support for legalization. A March 2017 study from Southern Illinois University found that 66 percent of voters in Illinois support or strongly support legalization of recreational marijuana if it is taxed and regulated like alcohol, as the amendment to SB0316 proposes. 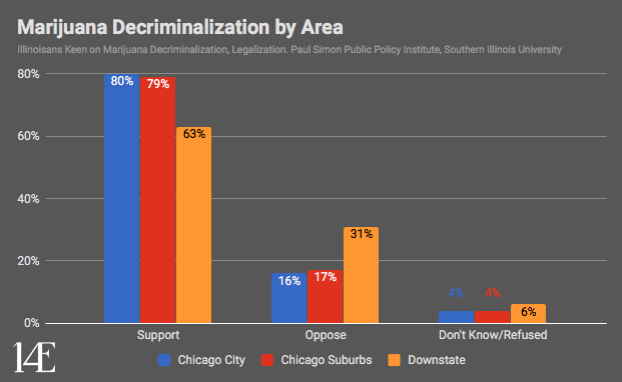 Tyler Williams, Midwest regional coordinator for SSDP, doesn’t believe the dismissal of the Cole Memo will change public opinion too much. While some might be worried about federal prosecution, Williams says the Cole Memo was always just that – a memo. The possibility that this rollback might happen has always been on the table.

“Rescinding the Cole Memo is a clear step to bringing back much older drug war policies that even most people disagree with. It’s something a lot of people can get fired up about,” Williams said. “This is just such a highly unpopular move that to some degree it gets people more interested and gets them involved, really opens the door to more people doing advocacy.” 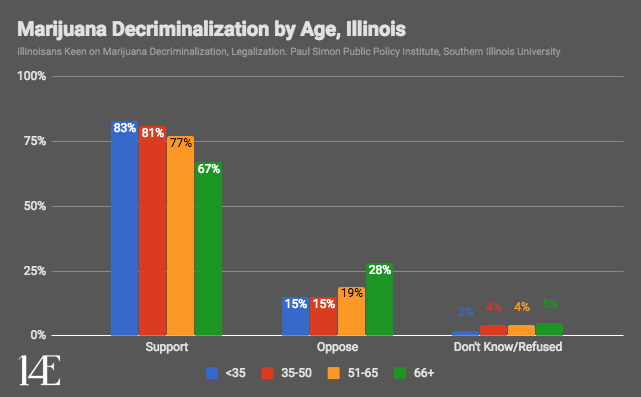 On DePaul’s campus Monday, over 60 people showed up in the small auditorium to have a conversation about that advocacy for SSDP’s Q&A session. Almeida’s main hope was for education. She wanted to see people learn what the bill means, when it could happen and what legalization would look like. The bill has now been read twice in front of the Illinois General Assembly, meaning it has one more reading to go before being voted on. After that, it would be sent to the governor’s desk – meaning the upcoming gubernatorial race will likely have an affect on the bill’s passage.

“I think getting students engaged in the political process is critical,” Steans said. “I think generally they support legalizing recreational marijuana; I think it is a stigma that is borne more heavily at the older population. So getting folks engaged I think is helpful to try to help get the bill passed.”

At the panel, people asked questions about how legalization would affect the criminal justice system and if there’s a case for reparations for Latinx and other communities of color that have been disproportionately affected by non-violent drug offenses. Panel attendees also expressed concerns over how to ensure small business growth within the industry, rather than lining the pockets of large corporations.

Steans said that she would support measures for reparations based on tax revenue, but there was no solid plan in place to do so as of yet. 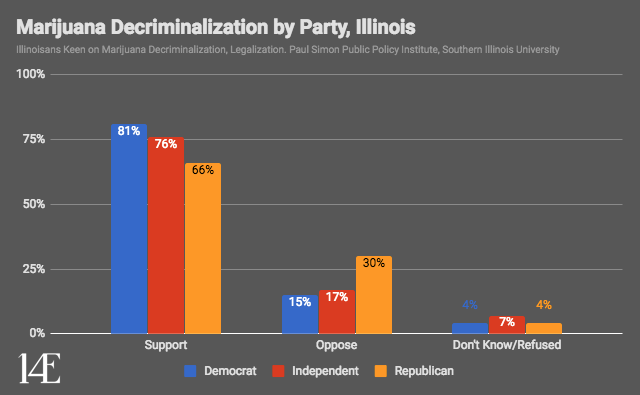 Under the amendment, tax revenue from the sale of marijuana is to be distributed every three months with 30 percent going to education; 50 percent to the General Revenue Fund; 10 percent to the Department of Public Health for prevention and treatment programs; and the last 10 percent will go to the Department of Public Health for an education campaign about the health and safety risks of alcohol, tobacco and cannabis.

As Illinois moves toward ending the prohibition of marijuana, it would be one of the first states to do so through legislation rather than a ballot initiative. “To get this done, practically speaking, we’re gonna have to do it legislatively,” Steans said.

While people like Almeida wish they could vote and have a say themselves, there’s still a chance to make their voices heard, even if not directly.

The question of recreational marijuana legalization will appear on the March 20 ballot for the gubernatorial primary – however, the vote is meant to judge support from constituents, not constitute a new law. While a vote in this case isn’t a tangible decision, it still provides understanding for legislators on where Illinoisans stand on the issue. Steans has been working to gather community input ever since filing the bill amendment on March 22, 2017.

Steans acknowledged that college students don’t always vote in the city – but reminds them that they can still call their representatives. She says state legislators don’t often receive the same volume of phone calls from constituents like aldermen do, so even a few calls can make a difference and put emphasis on a certain issue, no matter the side a voter supports.

The upcoming gubernatorial race is likely to have a say in its passing or not. Current Gov. Bruce Rauner has spoken out against marijuana legalization. However, Democratic primary candidates Daniel Biss and J.B. Pritzker have both sounded support for legalization. Chris Kennedy said he was “for full decriminalization,” but also called for a study of the drug’s effects.

However students feel about legalization in Illinois, Almeida wants to have a conversation about it. She believes the next best step campuses can take is to normalize drug discussion.

She also believes having these discussions professionally, and using evidence, is critical to ending negative stigma around marijuana and having the viewpoint taken seriously. Amy Hildebrand, president of DePaul’s SSDP chapter and main organizer of the panel, sends those who are skeptical to SSDP because of its research and professionalism.

“We’ve got all your statistics in the world, but there’s still gonna be people like Jeff Sessions saying like, ‘Bad people smoke cannabis,’ and that’s just not the case,” Hildebrand said at the panel. “That’s where SSDP comes in. Send them to places that look professional and don’t look like they’re a bunch of college kids getting together, smoking a bowl and saying, ‘Yeah you should legalize this.’ We’ve evolved, and we are those people too, but we also can back up everything that we’re saying.”

Tyler Bogartz-Brown, a freshman student in attendance at the SSDP panel, wants to be a part of that conversation. Bogartz-Brown came out that evening with the goal of learning more about initiatives being taken to legalize marijuana in Illinois.

Originally from California, he says he’s seen legalization come to fruition, and is excited about future opportunities for activism. Like Williams and others, Bogartz-Brown isn’t too concerned by Sessions rescinding the Cole Memo.

On Monday, January 22, there will be a public hearing at 10 a.m. on the public health aspects of legalization at the Bilandic Building, 160 N. LaSalle St. Steans encouraged students to show up for conversation and voice their thoughts.