Rick and Sergio Campagnola enjoy intimate quality time together jamming to some of their favorite music and putting together a 1000 piece Ravensburger puzzle at their dining room table.

Rick and Sergio share a semi-regular life in their cozy Rogers Park garden apartment with their two adorable dogs, Lego and Disney. Meeting through a social media app, Grindr, the Campagnolas began their love story with four months of dating, a summer breakup and discovering they couldn’t be without each other. After planning and paying for a huge wedding, they eloped spontaneously in Las Vegas on a vacation that “helped them realize why they loved each other.” But what adds to the Campagnolas’ unconventionality is they are a serodiscordant couple, meaning one partner is HIV positive and one is HIV negative.

HIV, or human immunodeficiency virus, is an ever-present threat in the gay community. In the beginning, being diagnosed with HIV was seen a death sentence, but today there are prospects of living a regular life through treatment, medical care and prevention. Advancements in medicine and technology have increased the possibilities and created an opportunity for love to develop.

Rick Campagnola contracted HIV more than fifteen years ago. At the ripe age of 20 years old and with his whole life ahead of him, Rick solemnly describes when he received the shocking news that he had contracted the virus: “It was during Christmas that I had gotten the flu, so you don’t really think that means anything, and that’s when it was converting. I was really sick for two weeks and just thought it was the flu.”

According to the Centers for Disease Control (CDC), an estimated 1.1 million adolescents and adults were living with HIV by the end of 2015. U.S. government investment has risen to more than $26 billion in domestic response to the disease, and the funds are spread across multiple departments. HIV causes progressive failure of the immune system, increasing the possibility of infections and cancer. For some people, HIV can develop into acquired immunodeficiency syndrome, or AIDS.

Rick was only expecting to see his doctor for a routine check-up when he received this life-altering news.  “I was 20, I was alone, I was scared,” he said. “But then, the first year you’re really focused on —  this was a time when a lot of medications were just starting to become easier and better and didn’t have a lot of side effects that they used to. So, my first year was a lot about my physical health.”

Dr. Irene O’Neill is a member of the American Board of Preventive Medicine and physician at Franciscan Health in Northwest Indiana. According to O’Neill, “Within Chicago there are about 23,000 current cases of HIV. Those are the ones we know about, and every year there are a little under 1,000 new cases diagnosed.” O’Neill also says that many people are unaware that they have the virus and continue to have with sex and spread HIV, creating a lot of undiagnosed infections.

HIV is a virus that infects people by getting inside their blood cells. The four ways that people contract HIV: from unprotected sexual contact, sharing needles, exposure to certain bodily fluids like breast milk or semen, and via birth from a HIV-positive mother. 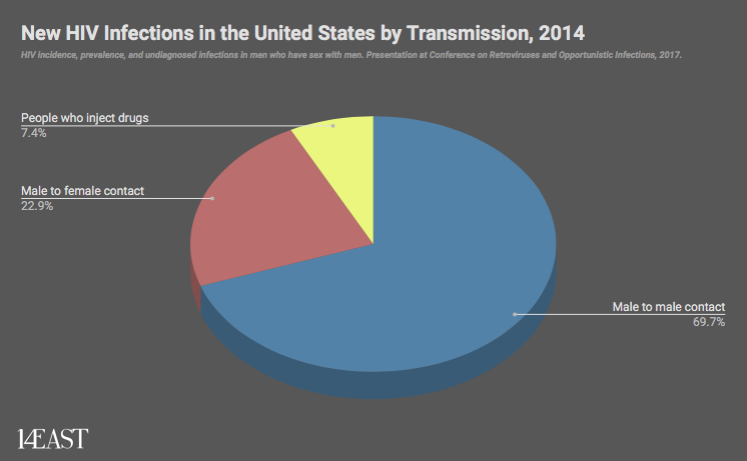 In the beginning of the spread of HIV, the medicine used to treat the disease was rudimentary and sometimes dangerous: fatigue, weight loss, nausea, diarrhea, vomiting, kidney failure, liver damage were just some of the potential side effects. In 1987, AZT was the first drug to be approved to treat AIDs according to the FDA.

However, due to an increase in resources and medical advancements, now more people than ever can prevent the contraction of HIV in a variety of ways. Pre-exposure prophylaxis, or PrEP, is a treatment where people at high risk of getting HIV can use to reduce their risk of contracting the virus.

Dr. O’Neill praised the drug as she described what PrEP is and its use: “The pill is a combination of drugs that we give to patients, usually in the ER when there could have been an exposure. We start them on that right away while we wait for the testing.”

Sergio Campagnola, husband and HIV-negative partner in a serodiscordant relationship, uses PrEP to maintain an HIV-negative status when he and Rick share intimate moments. “I’ve never thought of it as a license to be promiscuous,”  Sergio says.  It’s a way to live a life he’s comfortable with and be his best self.

For people living with HIV, support groups and events can be pivotal in maintaining an open lifestyle. At the Latinx-themed Hacienda Community Mixer in the Shapiro Ballroom, people come out to chat and drink the night away. At events like this, groups and places like Comprensión y Apoyo a Latinos en Oposición al Retrovirus (CALOR), an AIDS resource center and youth resource; Test Positive Aware Network (or TPAN), a nonprofit organization; and the Lakeview Specialty Clinic offer resources, host events and do free HIV testing.

Before transforming a regular gym into a red-themed party room, Eric Amaya, HIV tester with CALOR, says that he believes getting tested is important: “Anybody can contract the virus, so that’s why it’s so important to empower yourself to get tested —  HIV doesn’t discriminate, and it’s just a way for you to empower yourself.”

Dr. Robert Garofalo, a member of TPAN’s board of directors and an adolescent HIV expert, also has HIV.

As we sit in his quaint corner office with ceiling-to-floor glass windows, Dr. Garofalo opens up about his diagnosis with HIV and how he felt like he lost his life, the support of his loved ones, and became depressed, and how a dog brought him back to life.  According to Garofalo, however, it was the diagnosis that led him to be so passionate about his work. “I take my position on the board of directors extremely seriously, because I see that work as instrumental to serving populations of people that might otherwise fall through the cracks,” Dr. Garofalo says.

Even though there are support groups and places that offer help, having assistance from loved ones is also important.

“I make fun of him all the time,” Sergio says as he lightheartedly teases his partner, talking about how he encourages his partner Rick with his lifestyle. “He’s got nothing but support from me.”

Although contracting HIV can be life-changing, it is not the end of a life today. Having knowledge, getting tested and using the resources available can help minimize the stigmas of HIV. As we continue to move forward in medicine and develop more resources for the LGBTQIA+ community, the overarching message is the importance of becoming knowledgeable. In the effort to remove the stigma behind HIV, the greatest weapon is education.