The Tradition Marches On

I’m up to about three packs a week now, and I just can’t seem to quit. No one could have told me that, at 26, I would be sneaking away to Target on my lunch break to buy packs of Pokémon cards, but here I am, and I’m loving every minute of it.

I’d be silly to try to convince you into thinking that Pokémon isn’t on the fringes of geekdom — it absolutely is. But it’s also a supportive, tight-knit community and the highest-grossing media franchise of all time.

I mean, it’s not like I had some grand plan to get back into Pokémon or anything. It just sort of found me — again, this time in a booth across from my friend at Brownstones. As we sat down, he reached in his backpack and handed me a lime green, faux-snakeskin binder. Inside, Pokémon cards were organized three-by-three in protective plastic sheets. As I slowly flipped through the pages, he handed me something.

“A welcome back pack,” he said.

I carefully separated the plastic foil packaging, respecting the fragility of the ten round-edged pieces of paper I would soon own. In the five seconds or so before the cards were revealed, the possibilities seemed endless. It had been some thirteen years since I last opened a pack, but in that moment last month the only thing that mattered was whether I’d score an ultra rare or not.

No matter. The cards were secondary to the feeling. It was this safe place where warmth and imagination crossed to give me a much-needed dose of some healthy nostalgia.

But why, with a year left in college and a very adult life ahead of me, am I returning to a trading card game I stopped playing as a teen? Do people even do this anymore?

“That was the general mindset for a long time until 2016, when Pokémon Go came out. Then it became this fad that any person could pick up,” Ryan Hebert, DePaul sophomore, said.

Hebert is President of the DePaul PokéDemons, an organization that welcomes “the hardest of hardcore to people who have a mild interest in our club,” according to their Twitter page. He first started getting into Pokémon in the early-2000s, when he was around six or seven, and played until he started middle school. After picking it back up around his sophomore year of high school, he never stopped.

“It’s statistics, rock paper scissors with 20 different ways to throw rock, and then rolling the die,” Hebert said. “You stack these three things on top of each other, and you have [the game]. Yeah, it’s pretty geeky, I’ll say that. Most people like to embrace it because it’s something they like to do.”

Hebert, along with several of his fellow PokéDemons, don’t just embrace the game — they play it competitively at Pokémon Regional Championships all over the U.S.

“In the past three regional events, the turnout has been record-breaking,” Hebert said. “The last one I went to in Dallas had over 1,400 people competing in the video game and card game.” 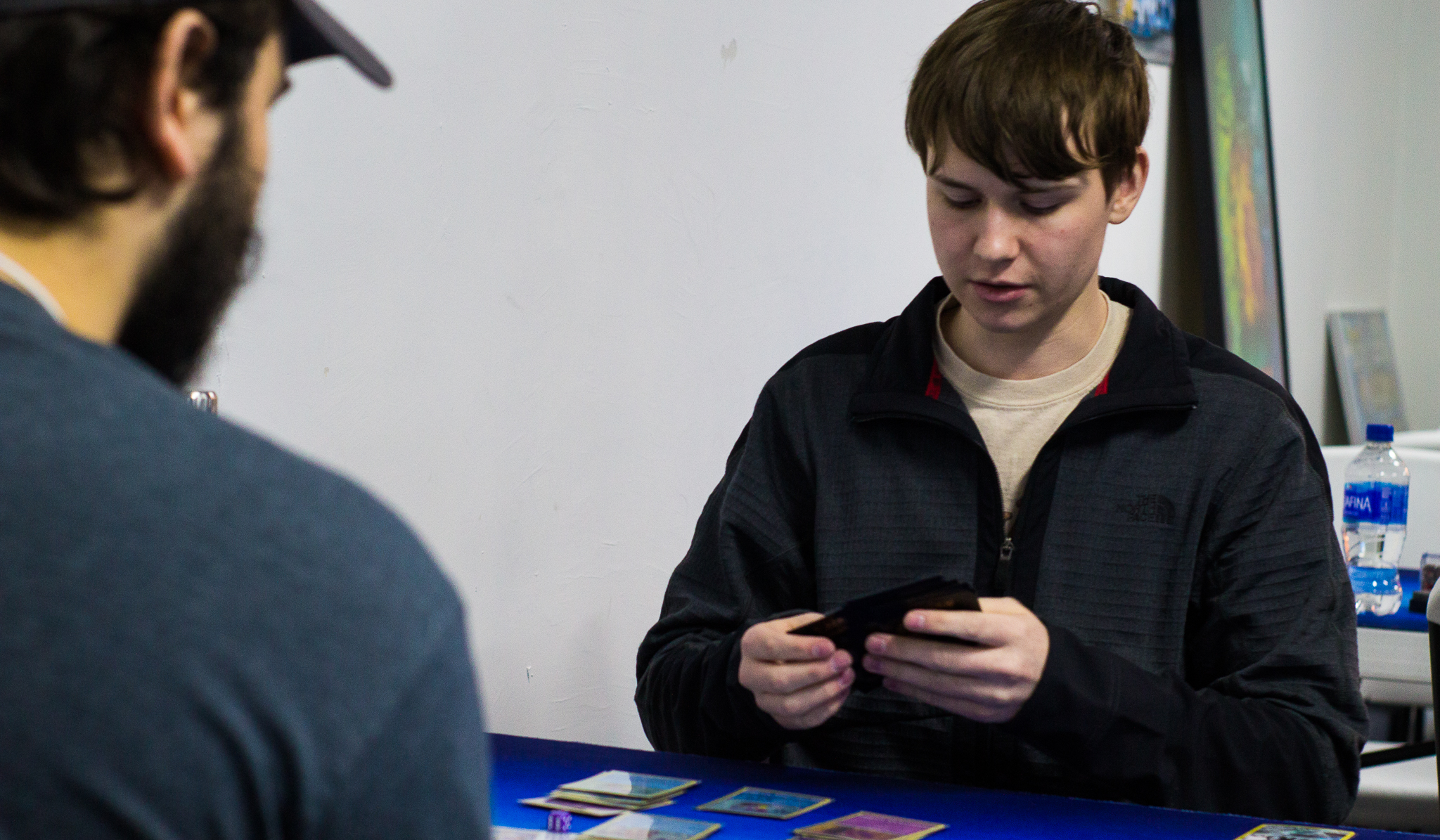 Competitive players, or trainers, are sorted into three divisions determined by age. After which, the most victorious Junior, Senior and Master division trainers battle it out for a chance to earn — based on attendance — up to $5,000 in the form of a scholarship, cash or a Pokémon Visa Prepaid Card. However, the prizes at regionals are peanuts compared to the spoils from the big dance: the Pokémon World Championships. At worlds, over $500,000 worth in prizes are doled out, with the winners of each age division taking home a cool $25,000.

Let’s face it though, if people really played for money, it wouldn’t be Pokémon. That’s because it isn’t just a game, it’s a lifestyle demonstrated to the fullest extent every Saturday morning when the DePaul PokéDemons meet.

I have to admit, I was nervous. I’ve been out of the game for quite some time, and I had no clue what to expect from a group of people who meet every week to discuss all things Pokémon. However, as soon as I entered the library room in Lincoln Park where the meeting was held, my nerves were replaced with affirmation. The DePaul PokéDemons were just as advertised — kind and catering to both hardcore trainers like my friend and amateurs coming out of retirement like yours truly. There were matches being held, trades being made and a rundown of future events and tournaments.

As we approached the end of the meeting, I realized that 11 a.m. to 12 p.m. time slot in the library was only halftime. Because from 1 to 4 p.m., most of the PokéDemons head over to the neighborhood Good Games for Pokemon League, a weekly gathering of local trainers interested in trading, chatting or battling. Well, usually. We made the three-block trek only to confirm our deepest fears — that an army of over 50 Magic the Gathering players had taken over the space to hold a tournament.

I remember seeing backs, not faces. Rows of white tables housed the predominantly-male group of Magic players who, at that point, were too deep into their game to notice we were there. It stood in almost symbolic contrast to the group of PokéDemons who welcomed me as one of their own a couple hours ago.

Despite the setback, hope was not lost. The remaining PokéDemons alerted their fellow league members of the change, and told them to meet back on campus. There, we met up with the rest of the league, including league owner Matthew Verive. Verive first got into Pokémon in the mid-2000s, but he’s played competitively since 2009.

“Then to now, I’ve been playing and seeing how the game has expanded in popularity,” Verive said. “We went from our biggest tournament being like 600 people to now over 1,000 in a single age division.”

Even though Verive is a competitive player, it is clear that he enjoys the responsibility that comes with leading a Pokémon League.

“League is good for getting practice in before tournaments, trading with other players and generally just hanging out with other people who play Pokémon.”

While some may laugh-off Pokémon as some “kiddie game,” people like Verive and Hebert prove that there is nothing wrong with keeping one foot forward, and the other in the familiar.

“Go to a Pokémon tournament, and just see what goes on,” Verive said. “See the variety of people that are there, the amount of just camaraderie and friendship that there is. And you can see that some of that is definitely a family. That’s the best way I can explain it — The Pokémon community is a second family to me.”

In the afternoon I spent with the PokéDemons and the Pokémon League, I understood exactly what Verive meant. As I looked up and down a long table littered with sandwich wrappers, binders and empty packs of Pokémon cards, I felt like a guest at the most welcoming family gathering ever assembled. A family where there were no fights — only battles, and a casual confidence that only comes from feeling at home.