‘I Need To Be Able To Accomplish My GoalR...

‘I Need To Be Able To Accomplish My Goal’: As Congress Stalls, DACA Recipients Wait With Uncertainty

Claudia Mendoza sits at her kitchen table, writing the personal statement that will complete her graduate school application. The degree, a master’s in accounting from Robert Morris University, is the latest step in her career plan.

At only 28, Mendoza has already built a full life for herself: she is married, owns a home and a dog, and works full-time as an accountant at Tabor Hills residential community. But everything Mendoza has built rests on a shaky foundation: DACA. Mendoza is an undocumented resident and her permit through DACA, or deferred action for childhood arrival,  gives her the legal protections she needs to work, study and live in the United States. But now with the uncertain future of DACA, and no permanent solution in sight, it’s possible that Claudia could lose it all.

Mendoza is one of almost 800,000 DACA recipients nationwide whose futures now hang in the balance. On September 5, 2017, the Trump administration announced that it would end the program, which was enacted in 2012 by President Obama to offer temporary legal protections to undocumented immigrants who were brought to the US as children. In the months following the announcement, several injunctions in the federal courts have allowed DACA recipients to continue applying for renewals, but Congress has failed to pass a permanent solution. Until they do, those currently protected by DACA will gradually lose protections and be at risk for deportation.

According to statistics from the Department of Homeland Security, Illinois is currently home to about 35,600 DACA recipients, the fourth largest population in the country. Now, as the end of DACA threatens to upend their lives, recipients in Chicago as well as advocates fighting alongside them are doing their best to cope with the uncertainty.

For Mendoza, life before DACA was a series of uphill battles as an undocumented person. She studied accounting at Northeastern Illinois University, but could not apply for any financial aid so had to work two jobs to afford tuition.

In the middle of all of this, Mendoza learned that she had kidney failure, and would need a transplant. Fortunately, she was covered by her father’s health insurance, and he acted as her donor.

On top of these health issues, Mendoza got arrested for a traffic violation in the spring of 2012. She thought this would mean automatic deportation, but because it was a minor offense, she was allowed to stay.

“I had reached a point where I was like, ‘I’m not gonna make it.’ It was either one thing or another and I began to feel like everything was falling apart. But then a few days later DACA comes out.”

When President Obama announced DACA in June 2012, Mendoza was one of the first in line to apply.

“I was like, ok here is a sign that there’s a little door opening that I could squeeze through and keep going.” 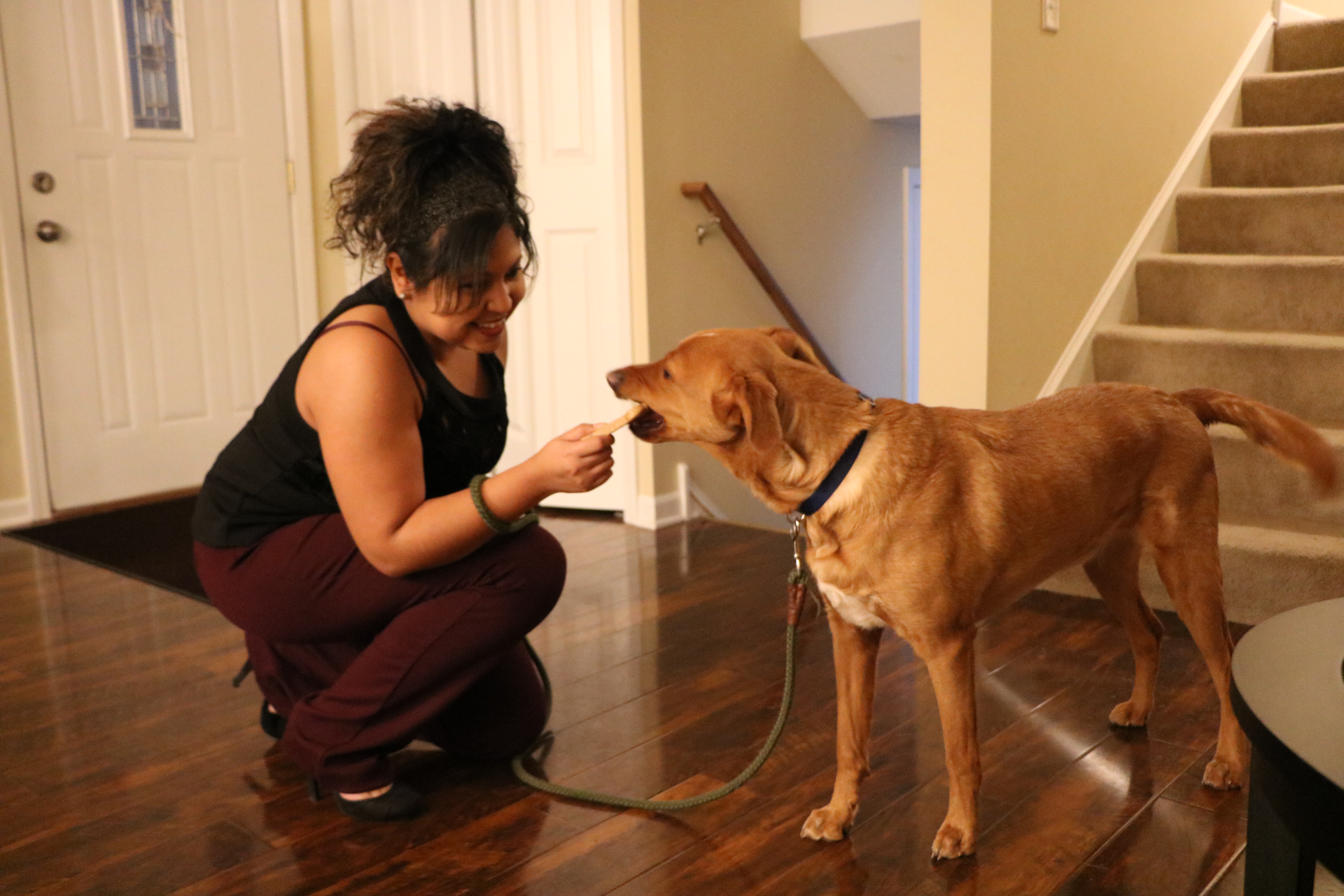 Now with DACA, Mendoza could get a driver’s license, apply for financial aid, and most importantly, work. She graduated from Northeastern Illinois University in 2014, and soon after started working in accounting.

“I got my Social Security number, got married to my husband, bought this house, another huge accomplishment,” said Mendoza “If it wasn’t for DACA, I wouldn’t be here right now with a house.”

Mendoza applied for renewal of her DACA permit soon after the Trump administration announced its intention to end the program in 2017. She has about two more years of protection, so it continuing to press forward with her life here, including the master’s degree. But she does worry about what may happen.

“It does make me nervous to think that one day they will end DACA and not have anything else for us,” said Mendoza. “It does scare me, because it would mean losing everything I’ve accomplished until now, and everything else I have planned to accomplish.”

A Fight in Congress, and on the Ground

While undocumented individuals are trying to secure their own futures in this country, advocacy groups all around Chicago are fighting for immigration reform through public campaigns and lobbying efforts.

Fred Tsao is senior counsel for the Illinois Coalition for Immigrant and Refugee Rights, where he advocates for immigration policy on the national level.

“Our role has largely been to maintain relationships and discussions and conversations with our members of Congress, with Sen. Dick Durbin, with Sen. Tammy Duckworth, various members of the Illinois House delegation, to make sure that they know…what we’re willing to support, and perhaps just as important, what we do not want them voting for.” 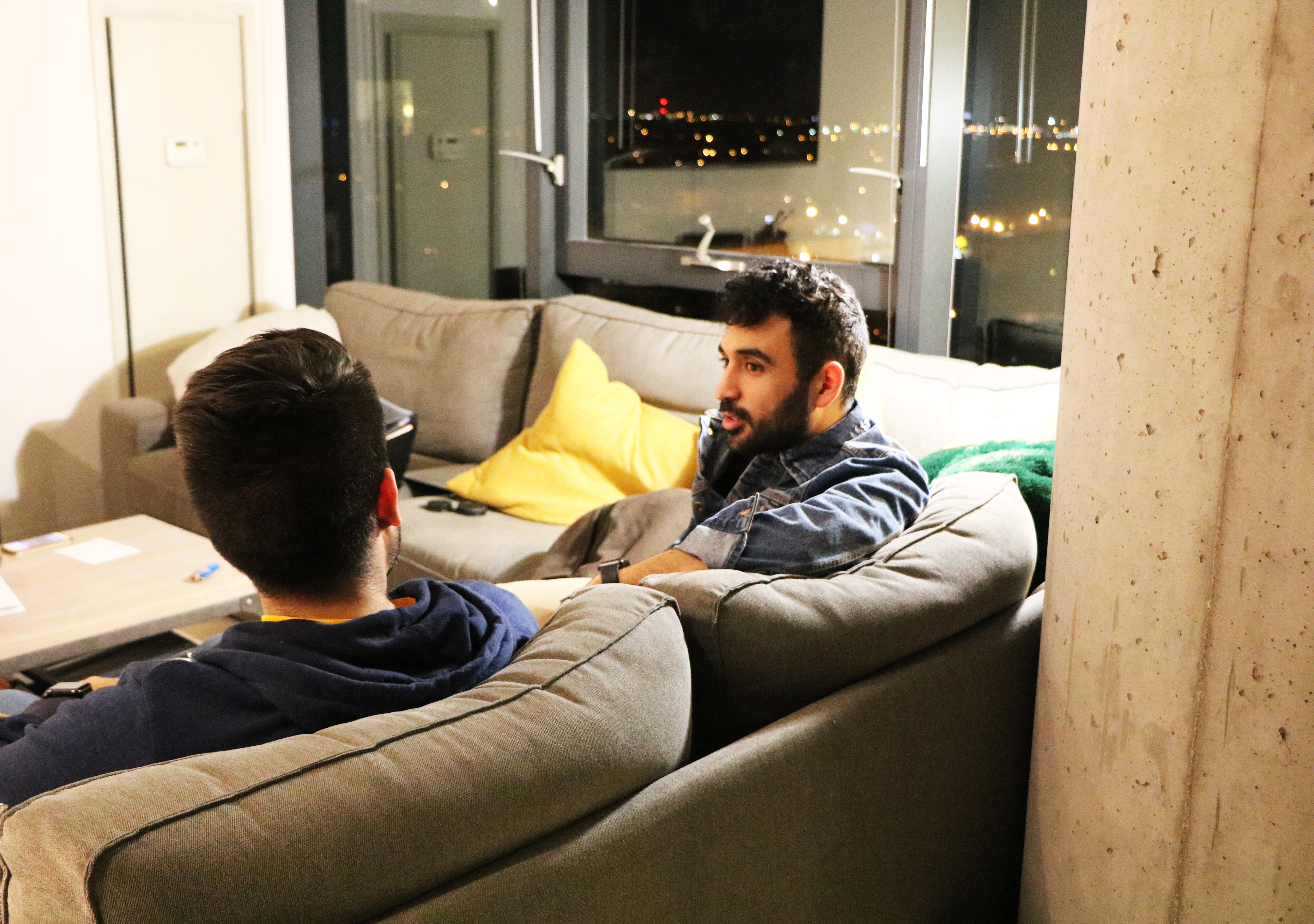 Fred Tsao, right, works with the Illinois Coalition for Immigrant and Refugee Rights to advocate for immigration policy on the national level. (Camille Squires, 14 East)

Beginning in December of 2017, Congress Democrats including Durbin and Duckworth have tried to tie DACA legislation to long-term funding bills necessary to keep the government open, in an attempt to force Republicans to vote on it. This led to a three-day shutdown on January 20 of this year, but legislators reopened the government by passing a short-term funding bill without voting on DACA. On February 15, three different proposals for permanent solutions went before the Senate, but none passed. Almost all these proposals pitted protection for DACA recipients against restrictive immigration measures like funding for a border wall, and changes to family migration policy. None could get enough bipartisan support to pass.

“The really sad aspect of this whole situation is that there is strong popular support for legalization for DACA youth, even among Republicans,” Tsao said. “Unfortunately the makeup of Congress and the current administration don’t necessarily reflect that.”

While some groups advocate for undocumented immigrants in Congress, others are focused on keeping people and communities here in Chicago supported and informed.

Micaella Verro does DACA-related advocacy as a part of her work with Erie House, where she serves as the director of health and leadership services. For over 100 years, Erie House provided services to immigrant communities, always adapting meet the needs of the populations they serve. Verro has coordinated public rallies, written email newsletters, and Know Your Rights trainings. Erie House has also helped people like Claudia Mendoza apply for DACA.

“Whenever we’re doing something, I feel that my role as a white woman with citizenship is to try to give people the tools that they need to tell their stories, and just create the opportunities for them to be the people up front,” Verro said. 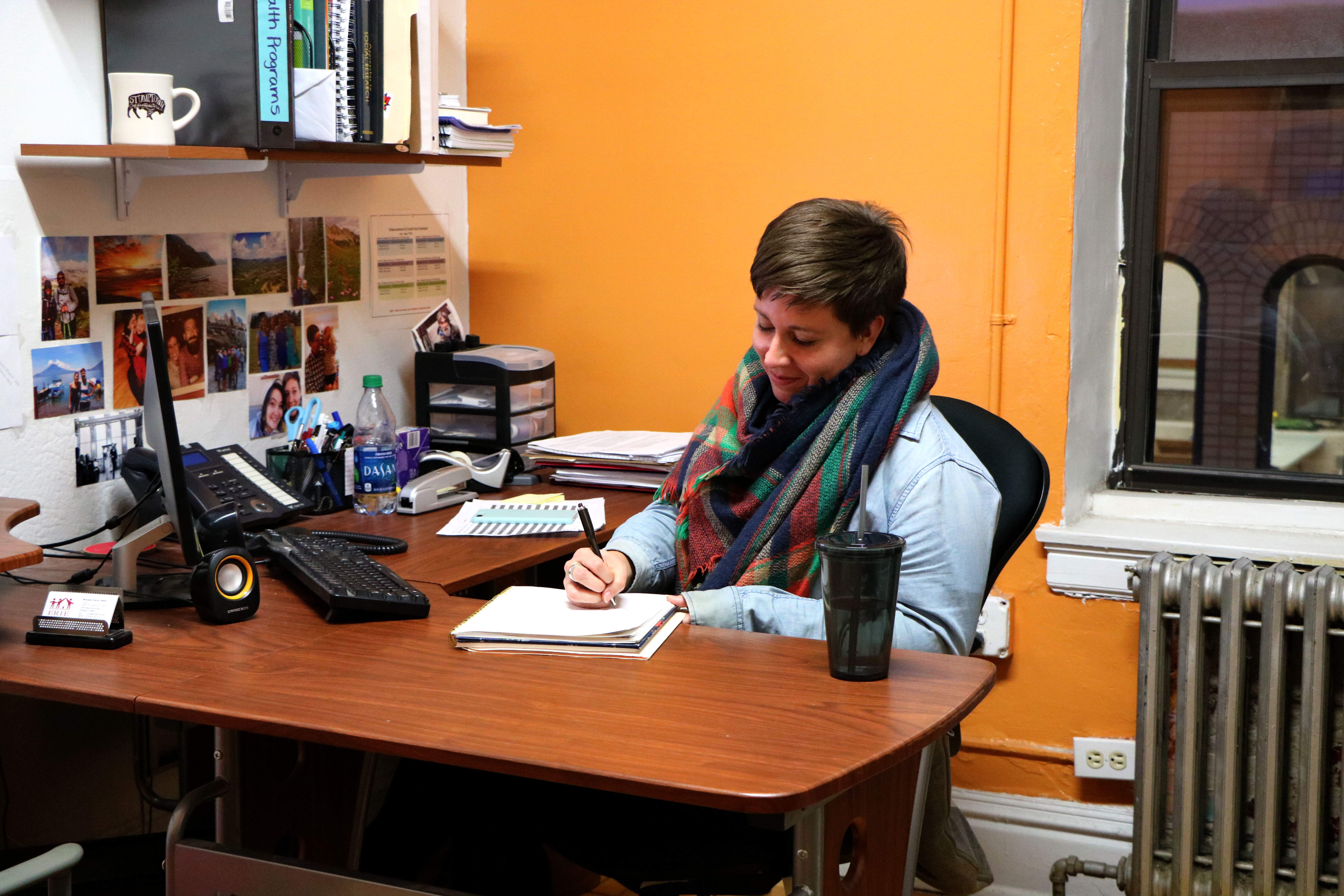 When talking about her work with Erie House, Michaella Verro said, “I feel that my role as a white woman with citizenship is to try to give people the tools that they need to tell their stories.” (Camille Squires, 14 East)

Verro still recognizes the important role that documented citizens can play as allies in this fight. Even people who don’t work in advocacy full-time can make a difference.

“When in doubt just show up. Go to a know your rights training so you know to how to be an ally, or you know what people’s rights are so if something doesn’t look right, you can use your citizenship and you can use your status to disrupt whatever is happening.”

A Reversal of Fortune

Jaime* lives in Chicago and teaches second grade through Teach For America. He is also a DACA recipient, and relies on his permit to be able to work. But Jaime knows first hand what it can mean to lose DACA status, because it has happened to him before.

Jaime first received DACA in 2014 as a college student. In the spring semester of his junior year he studied abroad in France, something that was permissible under DACA and that his immigration lawyer knew about. However, Jaime left for his study abroad program three days earlier than he listed on his forms, and this ended up being a problem. Two years later when he went to renew DACA, he found out that this mistake had disqualified him from the program. At the time, he was working with Teach for America in Colorado.

“I had to stop teaching at my school and move back to Georgia with my parents. I lost my car, my apartment, had to sell all of my belongings and just pack as much as I could and drive back to Georgia.”

Jaime tried to appeal and get the decision reversed, but to no avail. He kept reaching dead ends until he got in contact with an immigration lawyer who served on the board of his university, and practiced at one of the most reputable immigration firms in the country.

With his DACA status restored, Jaime could breathe a little easier. And just after this turn of good luck, Jaime’s situation improved even further: He was presented with an opportunity for full US citizenship.

A person in Jaime’s life who did have citizenship offered to sponsor him. He began the process over a year ago, and received his green card in March of this year.

“I’ve been so lucky in my life,” Jaime said. “ I now have a privileged status that many of my DACA friends don’t have which is that I do not have to live in constant uncertainty of my immigration status. ”

March 5, the original DACA end date set by the Trump administration, passed without permanent legislation to take its place. Throughout March, members of Congress scrambled to put together a deal that would get approval from both parties, and from Trump. Proposals offered an extension of DACA protections in exchange for more widespread immigration reform, including a border wall.

Ultimately, however no deal was reached, and on March 22nd, Congress passed an omnibus spending bill without addressing DACA.

In June, Congress failed to pass an immigration bill that would offer DACA recipients temporary legal status for six years, after which they could apply for a green card. The bill also granted $25 billion for a southern border wall and allowed families to be detained indefinitely in response to Trump’s “zero tolerance” policy on immigration. The bill failed 121-301.

Fred Tsao, like others watching the actions of policymakers, is despondent about the ability of Congress to come up with a viable solution to the DACA issue.

“It may take some changes to the composition of Congress, or it may take some other significant event to get all parties involved to a point where they can all agree. It’s kind of hard to see what that would be.”

The battle in the courts has meant that DACA renewal applications are still being accepted for now, but there remains lot of uncertainty about the future for DACA recipients here in Chicago, as well as the advocacy groups who fight for them.

This is a group of people for whom uncertainty has been a sort of status quo. They have developed a remarkable capacity to adapt to changing circumstances, and the decisions of Congress may force them to change once again.

“There are still millions of people, many of whom are DACA recipients’ parents, that have no status and could very well be detained and deported any day,” said Jaime. “I’m worried about my parents, I’m worried about so many of my closest friend who are DACA and whose futures are still uncertain. People with DACA rightfully feel that their future is at mercy of lawmakers.”

Header image by Cody Corrall. Photo by Camille Squires and art by Reagan.