Michael and Helen Cameron have a bit of a green thumb. By a bit, I mean they have the country’s first organic rooftop garden and Illinois’ first organic brewery.

Uncommon Ground took root in 1991 in the Lakeview area as a small coffee shop. Over the years, the coffee shop-turned-restaurant-turned-brewery has bloomed with a second location in Edgewater. The environmentally-conscious eatery has even been named the greenest restaurant in the country, and the Camerons are known as pioneers in sustainability within the restaurant and food industry.

Helen and Michael Cameron worked as an executive chef and food and beverage director at a small hotel downtown before deciding they wanted to go off on their own. They bought a small storefront on Grace Street in the Lakeview neighborhood and opened an espresso bar with seating for about 25 people inside and another 30 outside during the summer. They wanted to capitalize off the coffeehouse culture craze happening at the time and build a true neighborhood coffee house and café.

The couple worked at making their business a place for the community to find local flavor. They stocked their coffee from a local roaster and sought out other small businesses to source from. Helen bought ingredients from farmers’ markets on weekend trips to Michigan to see her parents. Everything was homemade. They saw their first space as just the beginning of their journey as business owners what would grow into their thriving business.

“We got busy and were doing really well, we had art, we had music nightly. In 1996, we expanded and added the storefront next door and more than doubled our occupancy and we added a real kitchen,” said Cameron. “I was using our espresso machine to cook eggs, so that was a big game-changer for us.”

In 1997 Uncommon Ground got their liquor license and were officially a full-fledged restaurant. 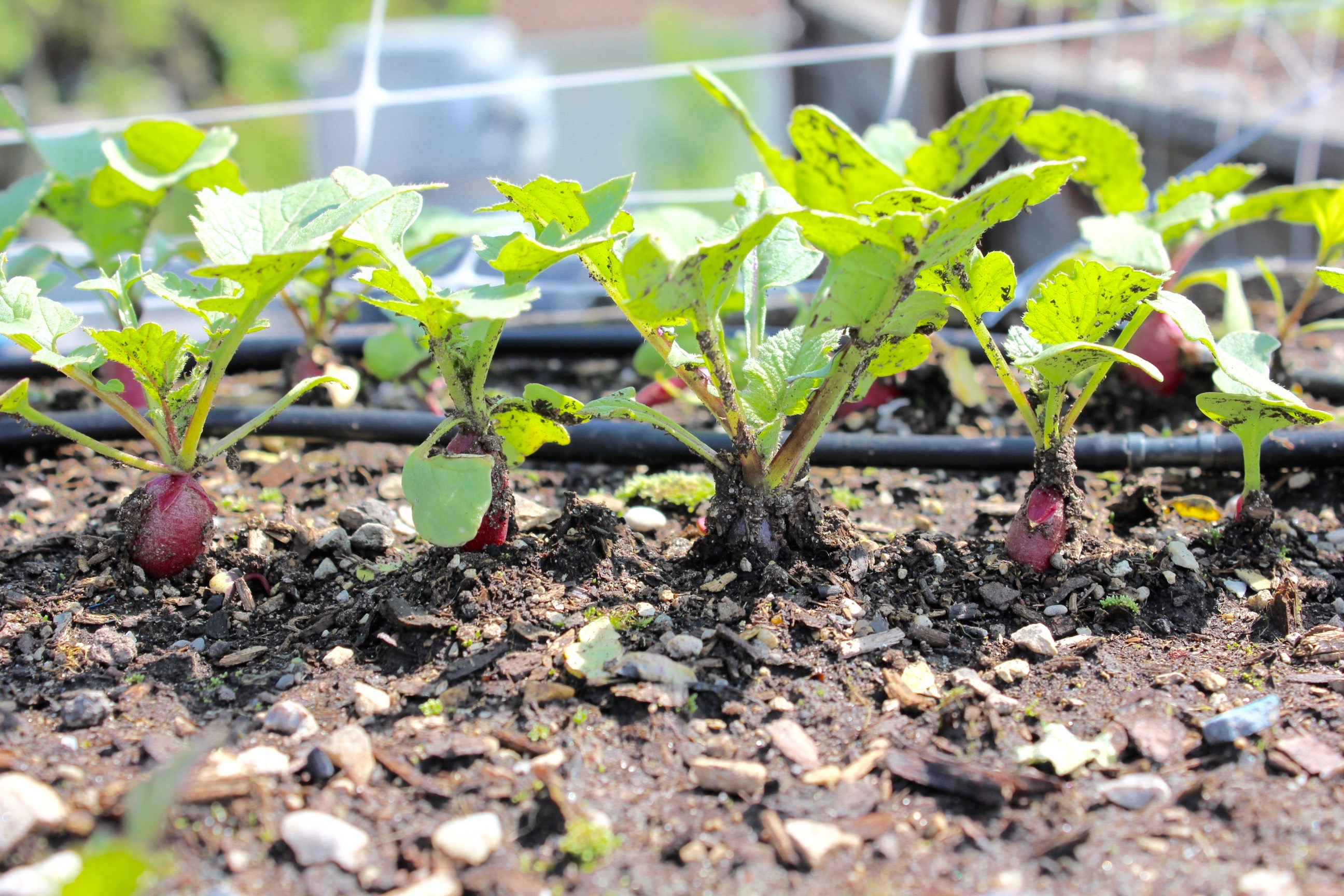 As Uncommon Ground grew, the Camerons’ values and business cemented in sustainability. They were looking to expand their successful restaurant to another location. In February 2007, they found the perfect second home at 1401 W. Devon St. in Edgewater. When inspecting the roof of their new property, Helen was struck by the beautiful view. She could see it clearly, a juicy ripe summer tomato, grown right here on the premise. Why couldn’t they grow their own food up here?

“Mike is holding the ladder, and I climb up there, and as soon as my eyes cross the roofline I see this big bright expanse, and the first thing that pops into my head is: big fat juicy tomato,” said Cameron. “I turned to Mike, and I said, ‘Holy s—t, Mike, we can grow food up here.’”

Their second building is over 100 years old, therefore a lot of construction took place for the roof to support the weight of the floating farm. They dug down the basement five feet and reinforced the structure below. They built a steel grid to support the building and its new weight and an irrigation system that could reach the roof.

All of this work was just to build the farm itself. They still had to be certified organic by Midwestern Organic Services Association (MOSA). To do so, organic farms must apply for certification and submit soil samples for testing. Any inputs whether it’s seed stock, fertilizer or soil are certified organic are approved by MOSA.

Uncommon Ground’s rooftop certified organic farm was the first of its kind in the United States.

“We’re sort of ground zero, and a place where people can really start off in the world of urban agriculture and sustainable food systems and I think that’s important,” said Cameron.

With 654 square feet of farm-able space, they can produce over 1,000 pounds of organic produce a year. Because of limited space, the rooftop farm cannot fully support the restaurants’ needs but puts a severe dent in the produce they have to outsource.

“Last season we did almost 1,500 pounds,” said Allison Glovak-Webb, Uncommon Ground’s farm director. “It was almost a record-breaking season; we missed it by two pounds.”

Uncommon Ground is deliberate with the produce it chooses to grow. The Camerons grow crops that can take a chill, as they never know what’s going to happen with Chicago weather.

“The best insurance with the weather and not knowing what it’s going to do is to plant a lot of crops,” said Glovak-Webb. “I’ve been growing a lot of diverse things and if one fails, you hope the other one thrives.”

The greenspace is just one way in which Uncommon Ground is dedicated to sustainability and responsible food practices. Greenstar Brewery, at the Clark St. location, is home to Illinois’ first certified organic brewery. In 2014, the Camerons wanted to expand their restaurant even more. They had been stocking organic beverages at their bar for years but decided it was time to make their own.

Greenstar Brewery is classified as a small brewpub, producing less than 500 barrels of beer a year. Demand for their in-house brewed beer has swelled over the years. Some of the brews they have created include an APA called “Certifiable,” an IPA named “Spaceship” and a French Saison fittingly called “Uncommon Saison.”

“We have 12 taps at two restaurants, and we’ve only been able to maintain between four and eight handles at any given time,” said brewmaster Martin Coad. “That’s entirely related to people drinking the beer faster than we can make it.”

Beer is made up of malt, water, hops, and yeast. When malt and hops grow, both crops can be sprayed with pesticides which can carry into a finished beer. Some ingredients found in beer can also have genetic modification, or chemicals can be added in by brewers to expedite the brewing process. Bottom line, while the beer-making process seems pretty straightforward, a lot of things can happen along the way to affect taste and quality.

Organic beer means that no pesticides are used on the malt or hops, no chemicals and non-GMO ingredients are used in the beer-making process. But not all beer is made organically.

“It’s silly because what’s happened is a lot of chemical manufacturers look at breweries and are like, ‘Oh, minimal supervision? What can we make to make a brewer’s life easier?’” said Coad.

This is part of the reason why Greenstar is organic and excludes those unnecessary additives from their beer. Greenstar Brewery is also overseen by MOSA as their certifying body. Each time Greenstar Brewery wants to create a new beer they must get it certified through MOSA. The brewery has produced 25 certified organic beers over the last four years. 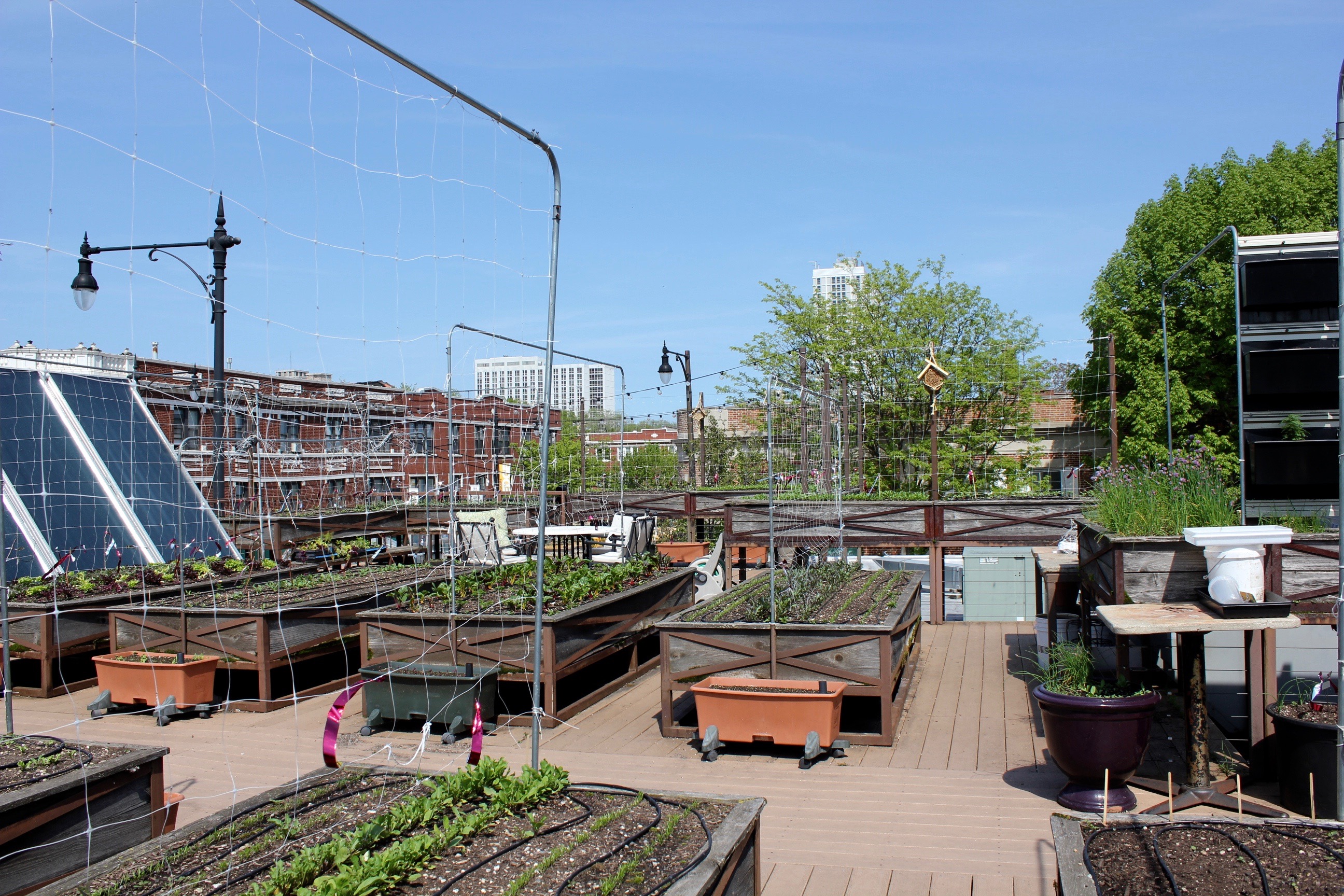 Uncommon Ground’s dedication to its green mission can be found at every turn. Even Greenstar Brewery’s name is an ode to its philosophy. The name is in honor of the numerous awards it has won for its sustainable practices. Awards include Greenest Restaurant in the U.S. by Green Restaurant Association in 2011 and 2013. In 2011, it snagged the number two spot on the list as well for its second location in Edgewater.

Urban cities are adopting green spaces into their infrastructure across the world. Singapore has had strict policies on green spaces and building since 2008. The mayor of Paris, Anne Hidalgo, announced that the city plans to cover 247 acres of the city’s rooftops and walls with vegetation — a project that Helen Cameron consulted on as a pioneer of rooftop farming.

Evidence of humans’ mistreatment of nature can be found around the globe. The way we treat our environment is intrinsically connected to our food supply, and many people like the Camerons share the idea that we must treat that source better and find alternative ways to grow our food.

Creating community is just as crucial to Uncommon Ground as feeding people. One way it tries to do this is through music. Since Uncommon Ground’s inception, it has had live music at all of its spaces and expanded its programming to include competitions and open mics.

“We provide hospitality with food and drink but also with culture, art and music. We also do a lot of connecting with neighborhood groups and help them raise funds,” said Cameron. “We really consider ourselves a community center, that is a huge thing. Nourishing community isn’t just about eating and drinking; it encompasses that other layer of culture.”

The Uncommon Ground team wants to lead as an example in their community and continue to educate and spread awareness. The first Friday of every month they host an open house on their rooftop garden for the public to seek them out to answer agricultural or gardening questions or concerns. They also have an internship program through the rooftop farm that is open to the public. The program is part educational and part hands-on work on the farm.

“There’s sunshine here, and there’s rain here, there’s everything you need,” Cameron said. “There’s a recipe for success, and you just need the will to make it successful.”