Justice for Laquan: After Van ..

It is well-known that the world is facing a displaced population crisis. Beyond that, we are not aware of the who, what, where, when, or why of the daily life of someone who is forced to flee from their home.

That’s why Doctors Without Borders, known internationally as Médecins Sans Frontières, or MSF, started traveling around the states with a pop-up exhibition. The first of these exhibits was in 2017 in Boulder, Colorado, but this past week they brought the exhibit to Chicago for the first time.

From September 23 through September 30, the hour-long exhibit was free and open to the public at the Richard Daley Center. As thousands of Chicagoans went about their day in the center of the city, many stopped to take a tour about what it is like to flee from your home. 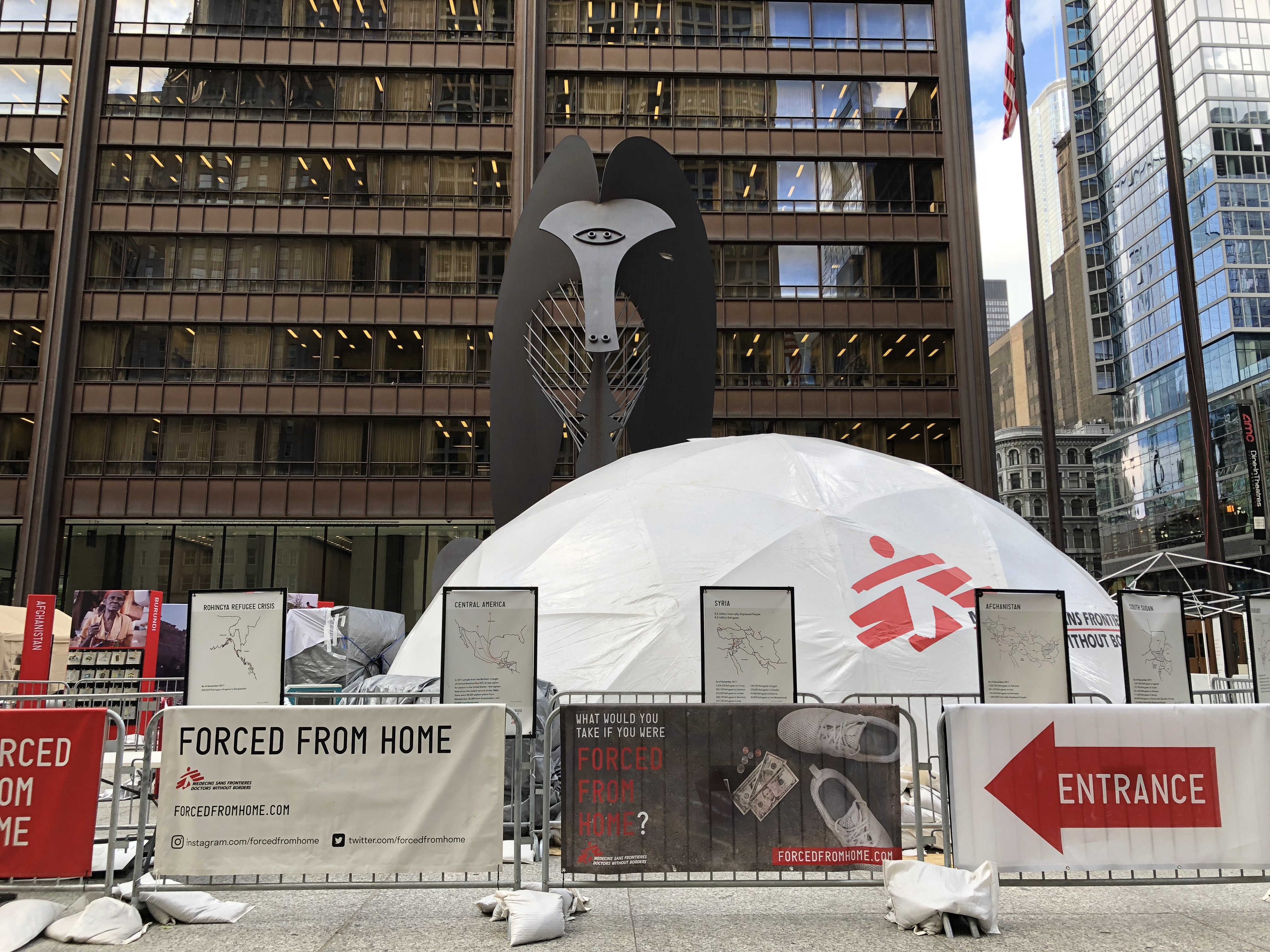 Each guest was given a card showing their new identity and immigration status, which would alter the route we would take along the exhibition. I was an internationally displaced person from Syria. This is different than a refugee, which I would find out later along the tour. In terms of overall displacement, Syria accounts for the most displaced people internationally, with 12 million people (65 percent of the population).

In my tour group I was accompanied by a group of elders from a Presbyterian church and a couple from the Czech Republic. 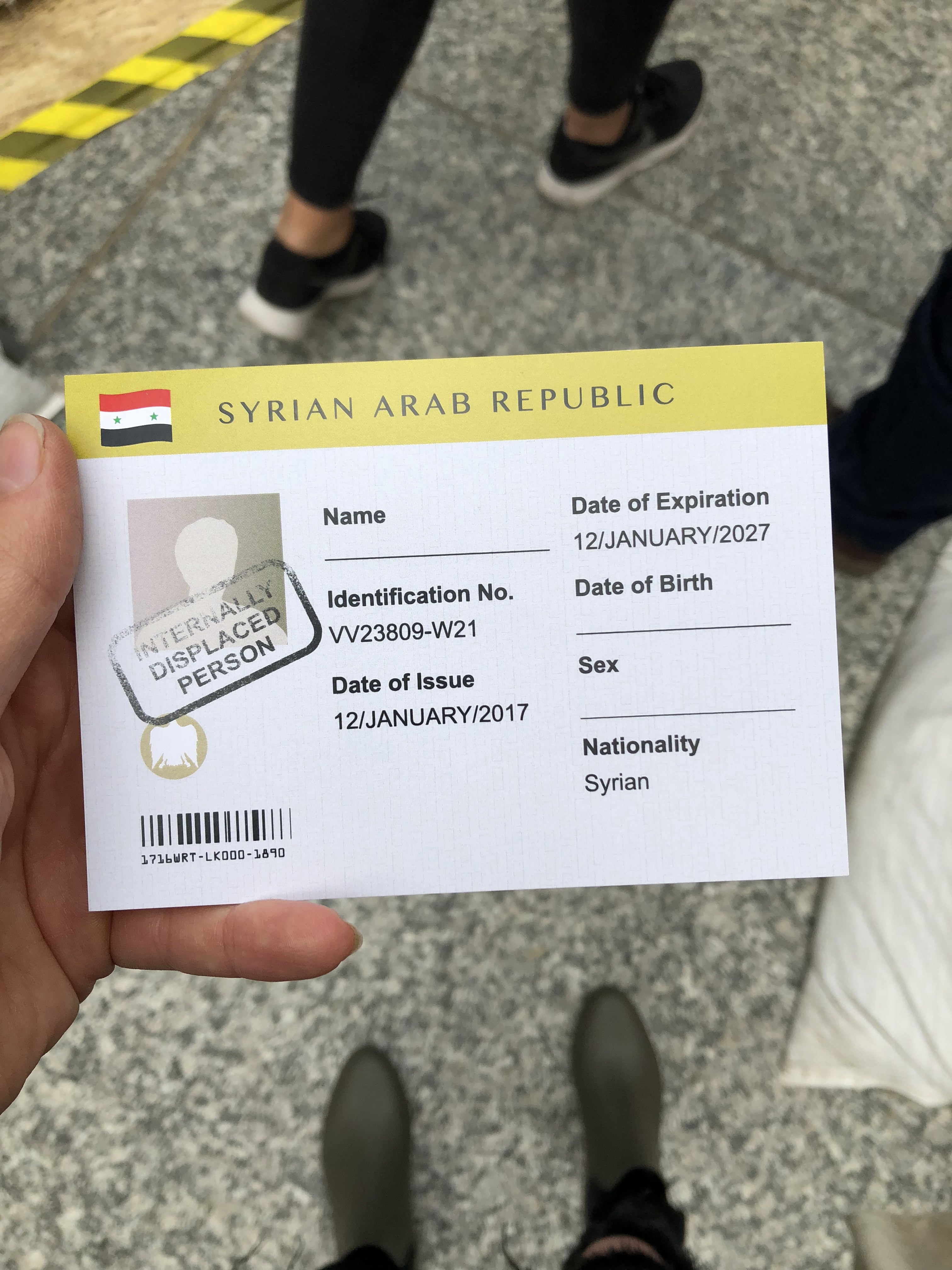 The exhibition started off with a six minute long 360 degree video. It highlighted the five countries included in the program: Afghanistan, Honduras, South Sudan, Syria and Burundi. The purpose was to simulate walking around in the camps and to see up-close the horrendous conditions in which they are living. 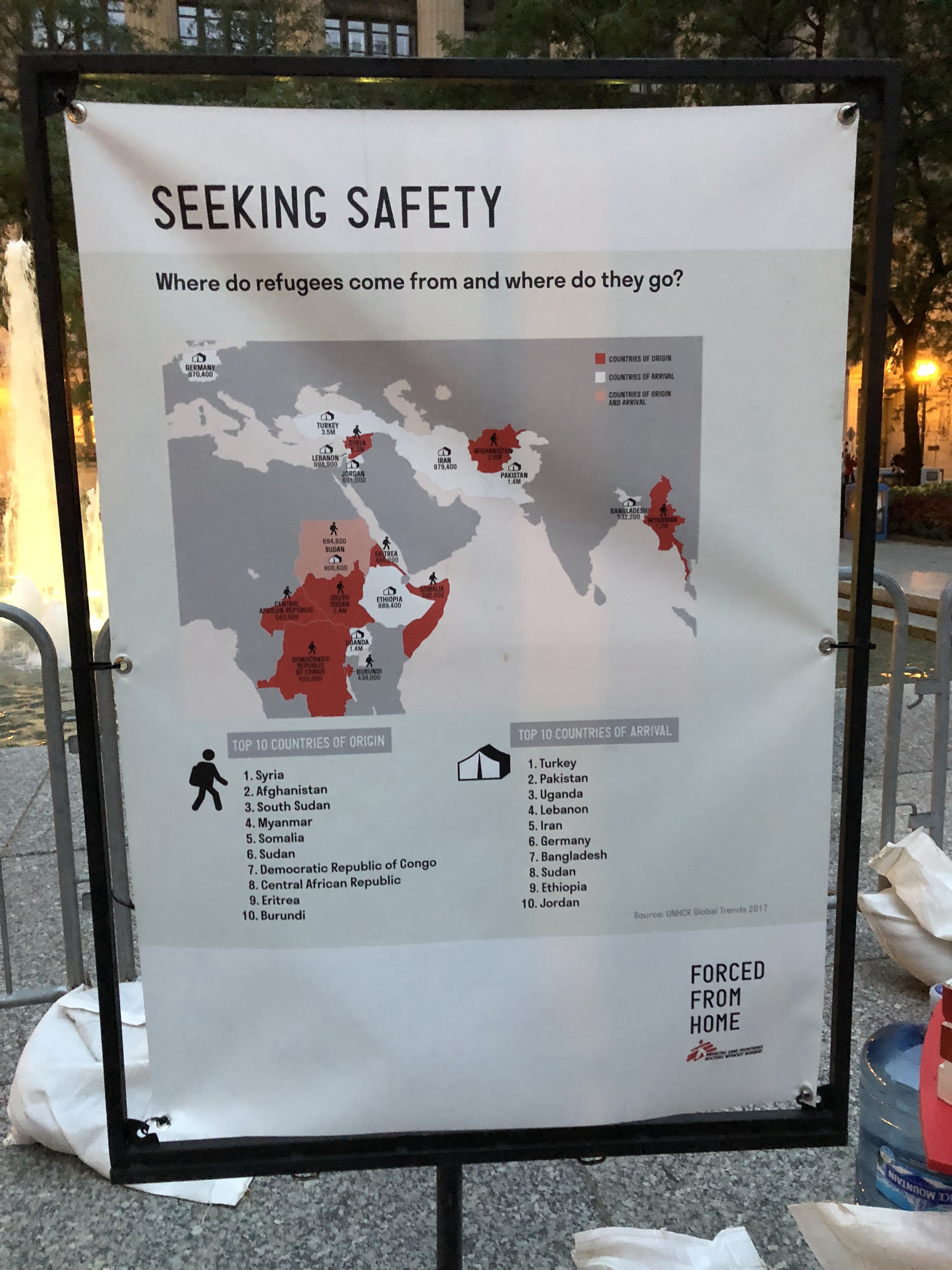 Before we began walking through the exhibition, we were given thirty seconds to scramble and pick items off of a wall that we would want to take with us if we had to flee our home. I took my cell phone, passport, money, water and a fishing net. Other items included shoes, family photos and keys. In between the nine different stations, we were forced to let go of one of our items. The ability to grab five things is even unrealistic, Anna said, especially when these people have children they have to carry and may have no time to even think of what to grab.

I first let go of the fishing net. 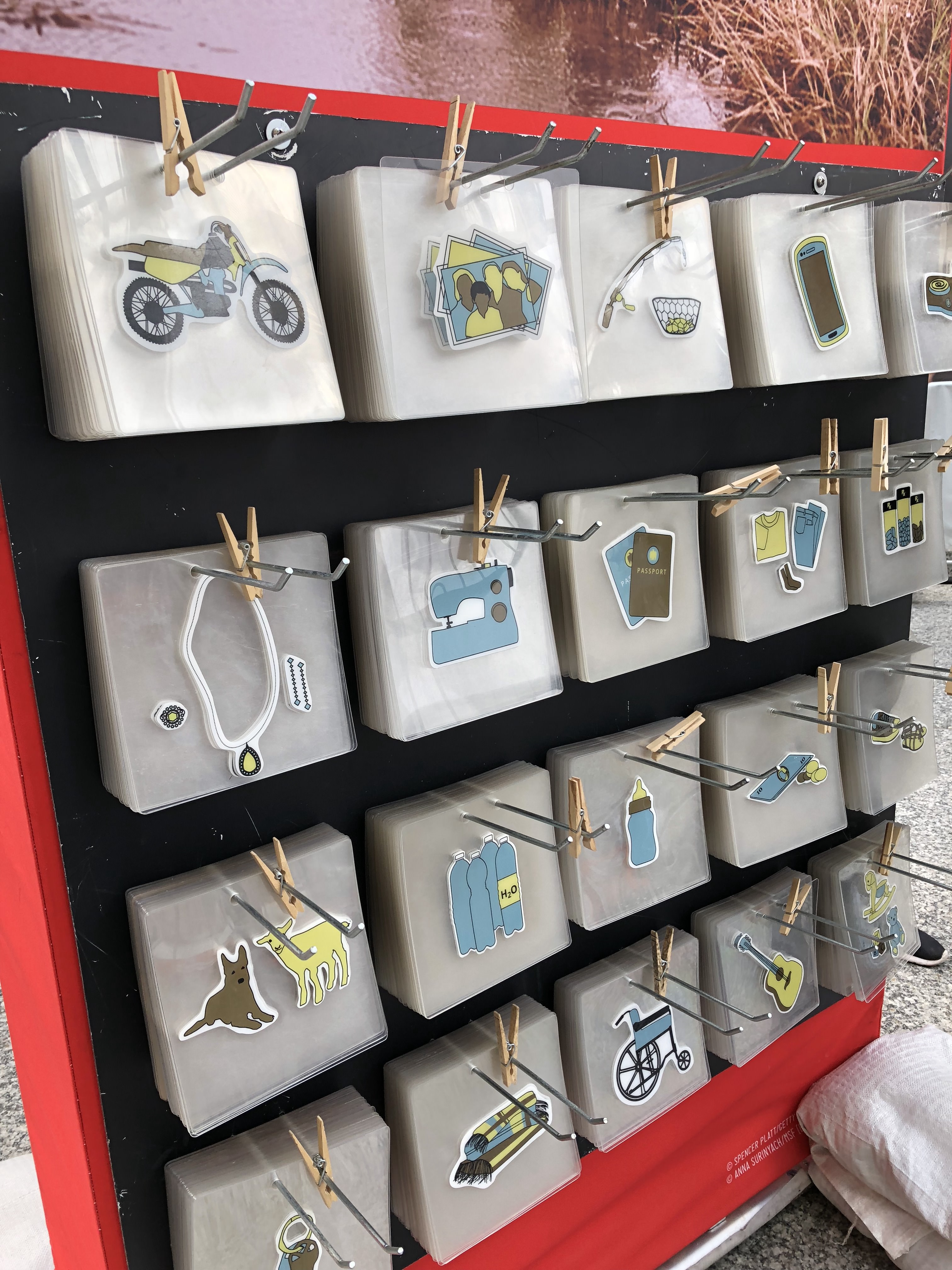 Most people are aware that people are fleeing their home but may not be aware of why. Forced From Home tried to simplify the complexities of their situation into several push factors or forces that give people no choice but to leave.

“Push factors are linked, there is a mixture of each in every country we work in, and not all push factors are global,” my tour guide, Anna, said. “This is a big complex system. Don’t make the assumptions that you are told about refugees.”

The five countries highlighted on the tour were picked because they each highlighted a different push factor, such as political strife, civil unrest, religious persecution, poverty, environmental disasters and war.

“We are in so many different countries, only really can focus on five, and even at that point we are not able to go in so deeply,” said Celeste Thompson, MSF logistician and field worker. “If you go on a tour again with a different guide, you get a completely different perspective.”

Next I dropped my water. I felt that my other items were too valuable to give up. 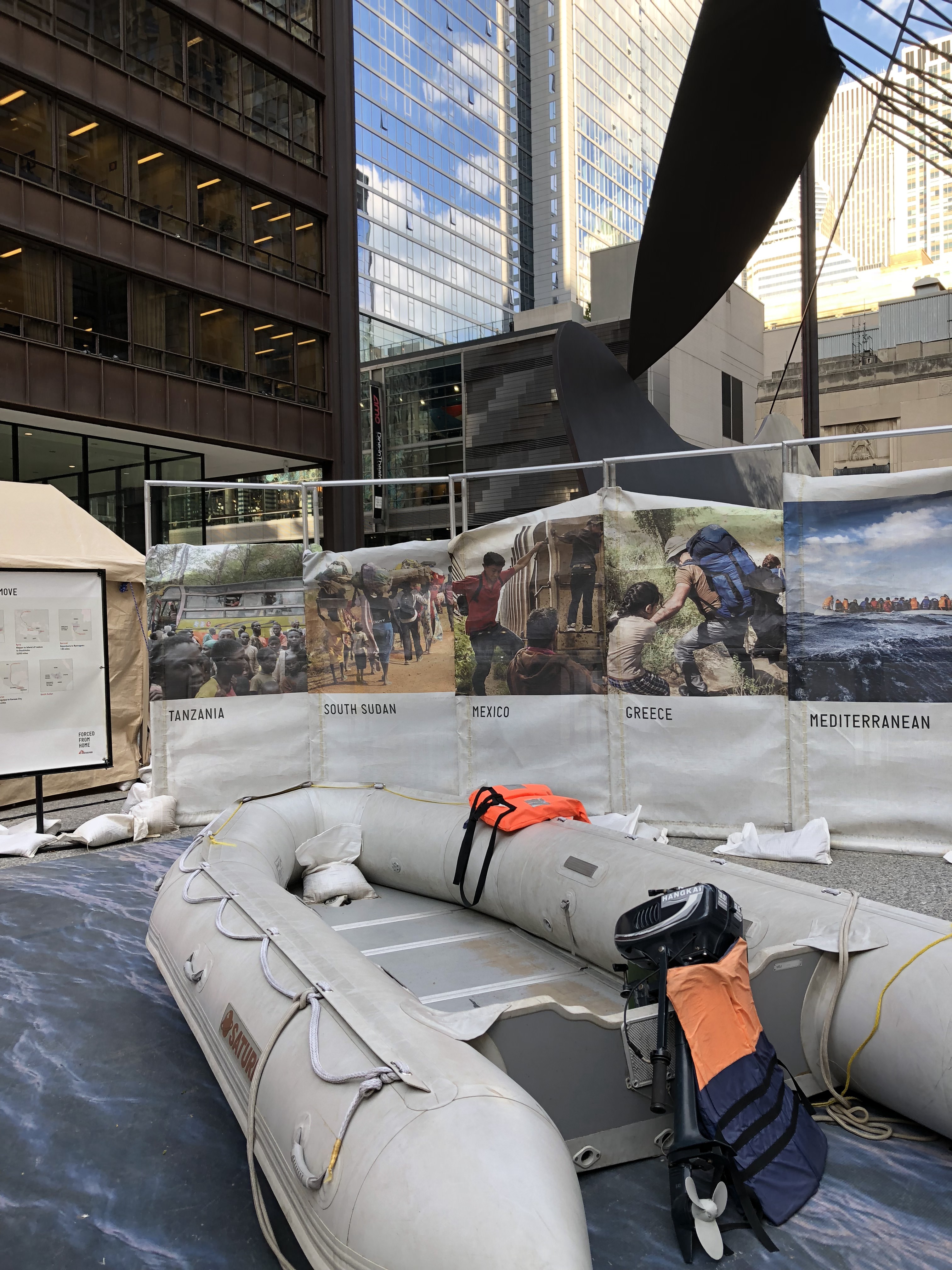 My group of 10 gathered into a small boat. We were cramped. This boat, typically made for eight to go out on a lake, Anna said, typically will carry over 30 people trying to flee. Most of these migrants pass through Libya in the hope of making it to Italy by boat across the Mediterranean Sea. From Honduras, however, people flee by train in hopes of getting to Mexico.  She said the bigger boats will be packed with one hundred men, women and children. The trips are made by smugglers who ask up to $1,000-$2,000 for a ride. Life jackets go for about $200 a vest. Often, the gas tank will spill, and, when mixed with the salt water, will create a skin-burning acid.

Once the boat departs, the smugglers will often swim back to transport another group, leaving the others to fend for themselves. Lack of direction, inability to swim, the acid and other illnesses often cause many of the people to die. In 2015, over 5,000 people died along the sea route through the Mediterranean Sea, many of whom were children. Seventy-five percent of all migrant deaths occur in the Mediterranean as they try to reach a richer country with better internment camps.

Here, I gave up my money. Anna said depending on which country you are coming from, your money could be worthless. I found my identification and phone more important. 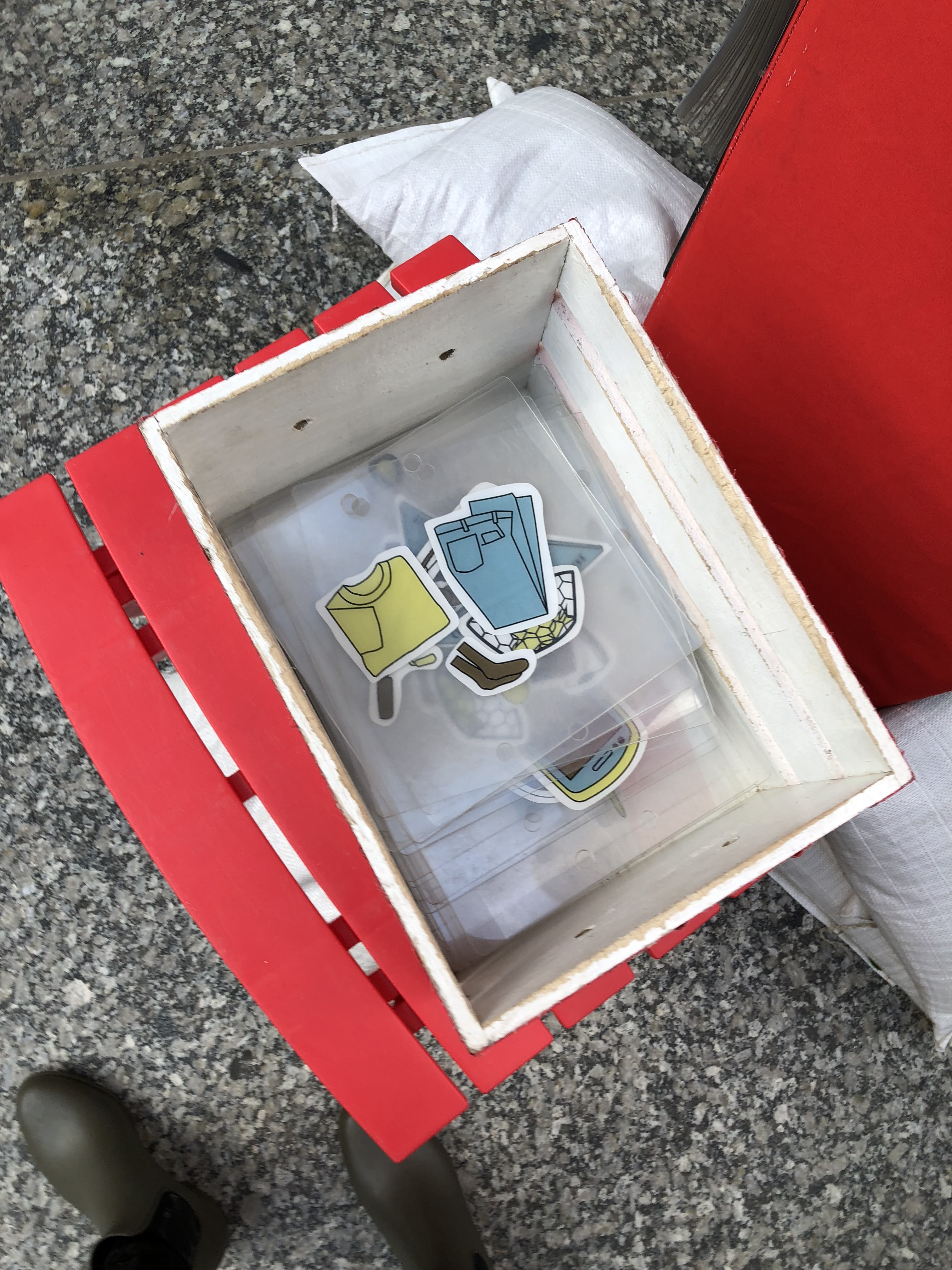 Items left behind during the journey. (Mikayla Rose Price)

Refugee is a term that we often use too carelessly, and legal status is much more complicated than this one term. A refugee is someone who has left the country in which they have citizenship and cannot return home because of war and/or persecution. Under international law, refugees are guaranteed the right to seek asylum, according to MSF. What often is unreported are the people who are not protected by this international law, such as a migrant, stateless person or an internally displaced person. 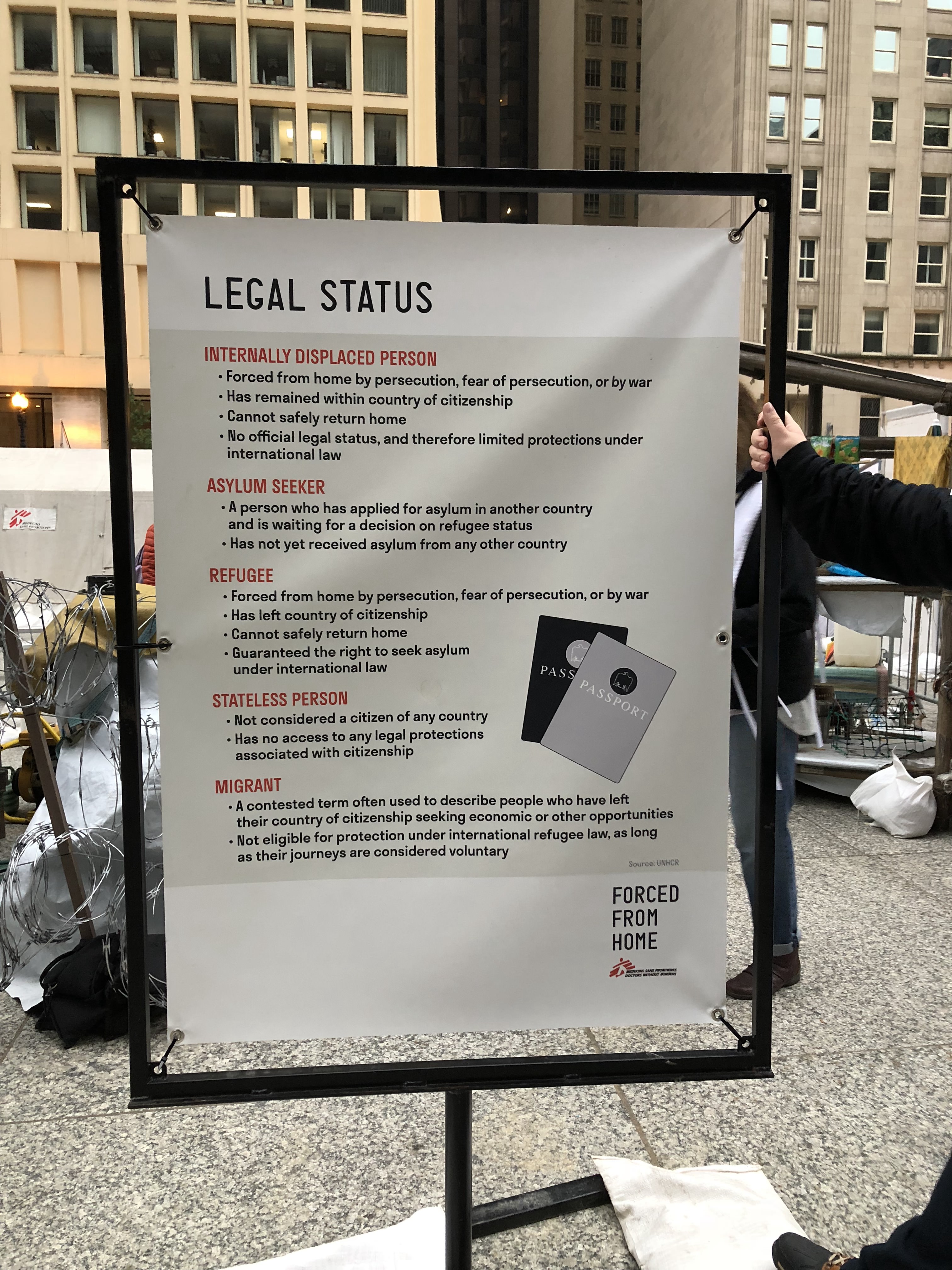 After learning that depending on where I come from my passport could be worthless, I let go of it. 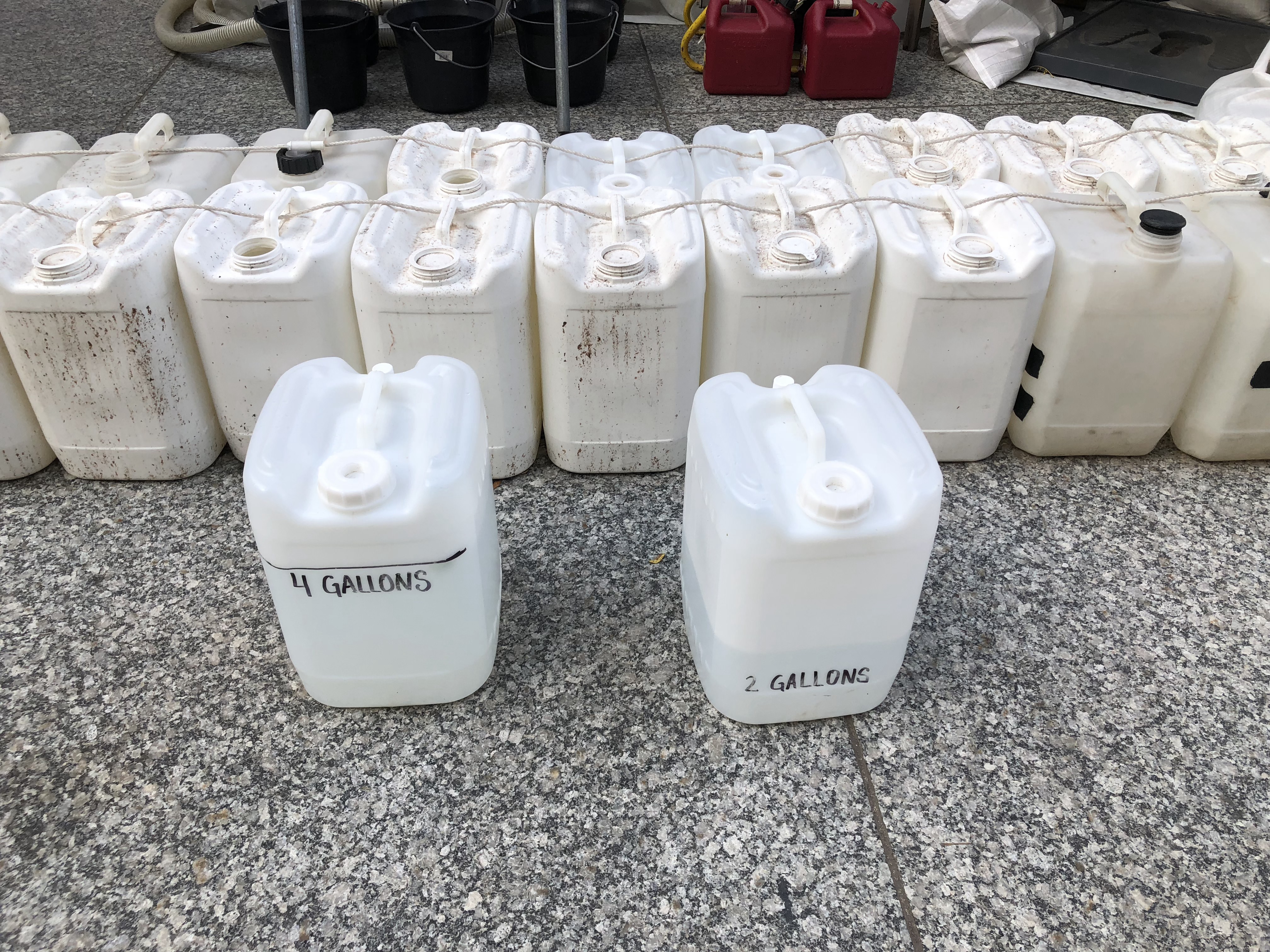 While most Americans use 90 gallons of water per day, migrants use roughly two gallons. (Mikayla Rose Price, 14 East)

“Fruits, vegetables, rice, and vegetable oil are donated from the World Food organization. Solar panels are given to charge their phones. If you have your phone, you can call your mom to see if she is alive, find out ahead when and if the rebels are coming, and use a text message to buy some food from the camp.” Anna said.

Because of unsafe water, insufficient amount of food, poor hygiene, overcrowding, and weather conditions, everyone is prone to illness. Here are some stats on how many people were treated per disease: 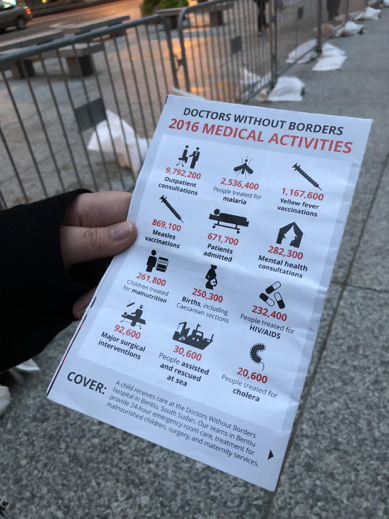 Refugee camps are also usually placed in open, empty spaces. They are empty because they are uninhabitable, meaning they are often prone to monsoons, mudslides and even elephant stampedes.

MSF has centers based in Europe and East Africa and stores of emergency materials in Central America and East Asia. According to their website, they can fly planes out into crisis areas within 24 hours,  with supplies such as pop-up medical tents. 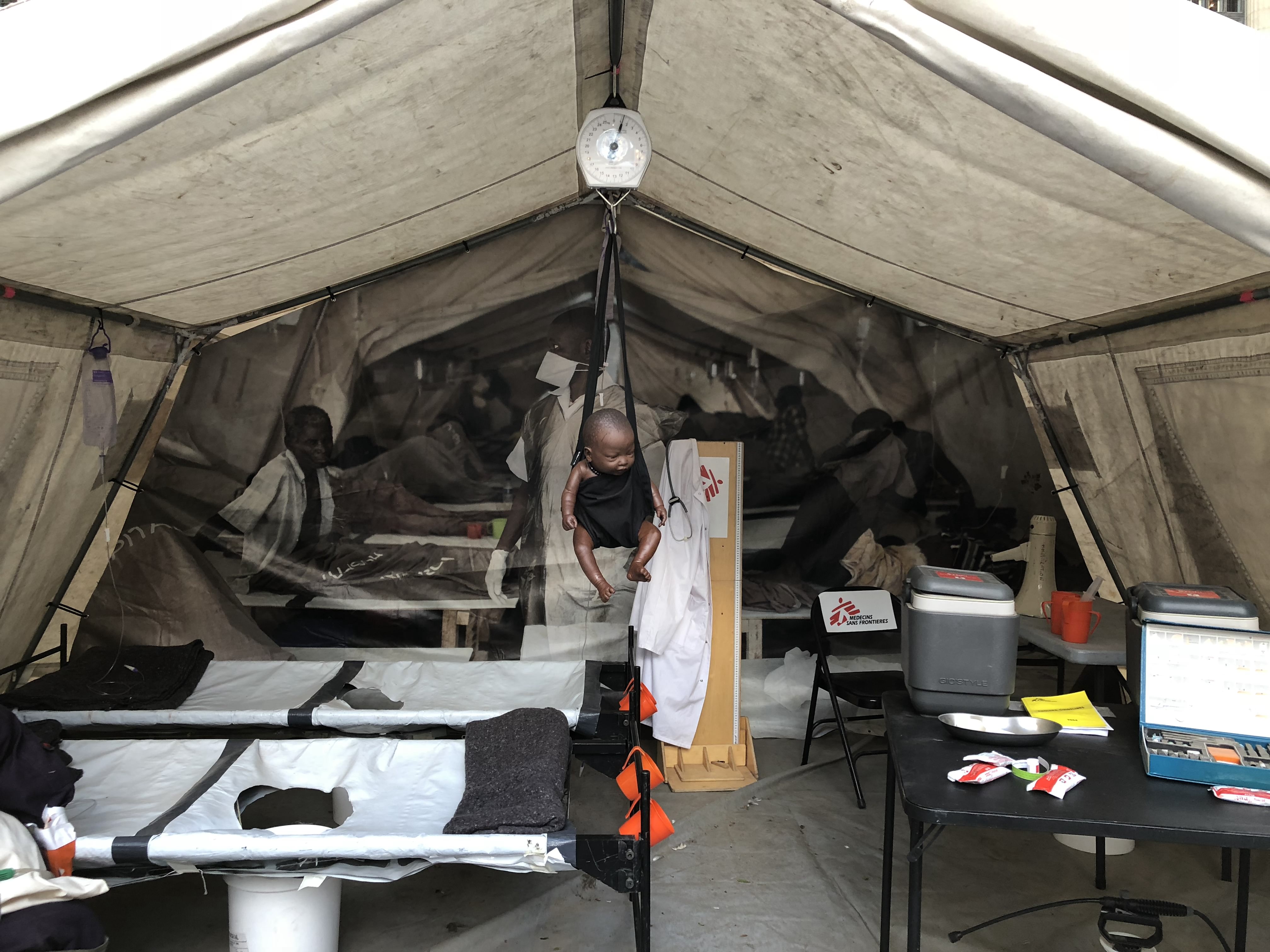 Most children in the camps suffer from malnutrition, and are tested with a “Middle Upper Arm Circumference” test, or MUAC. MUAC takes the circumference of the left upper arm, measured at the mid-point between the tip of the shoulder and the tip of the elbow to see if children are lacking muscle and skin fat. To treat this, doctors give them “plumpy nut” a therapeutic ready-to-use food comprised of peanut butter and milk protein. One sachet is 500 calories, and children are typically fed two to three a day.

Because refugees often cannot read or write, MSF has step-by-step paintings that explain the symptoms and treatments of common illnesses, such as malaria.

After going through the exhibit, we all stood in a circle for Anna’s closing words. We were overwhelmed with shock, sadness and almost hopelessness. MSF is doing everything they can to help combat this crisis. As much as one person or organization cannot end it, it did motivate me to wonder what more I could be doing. There is so much about the crisis that is not covered in the news. 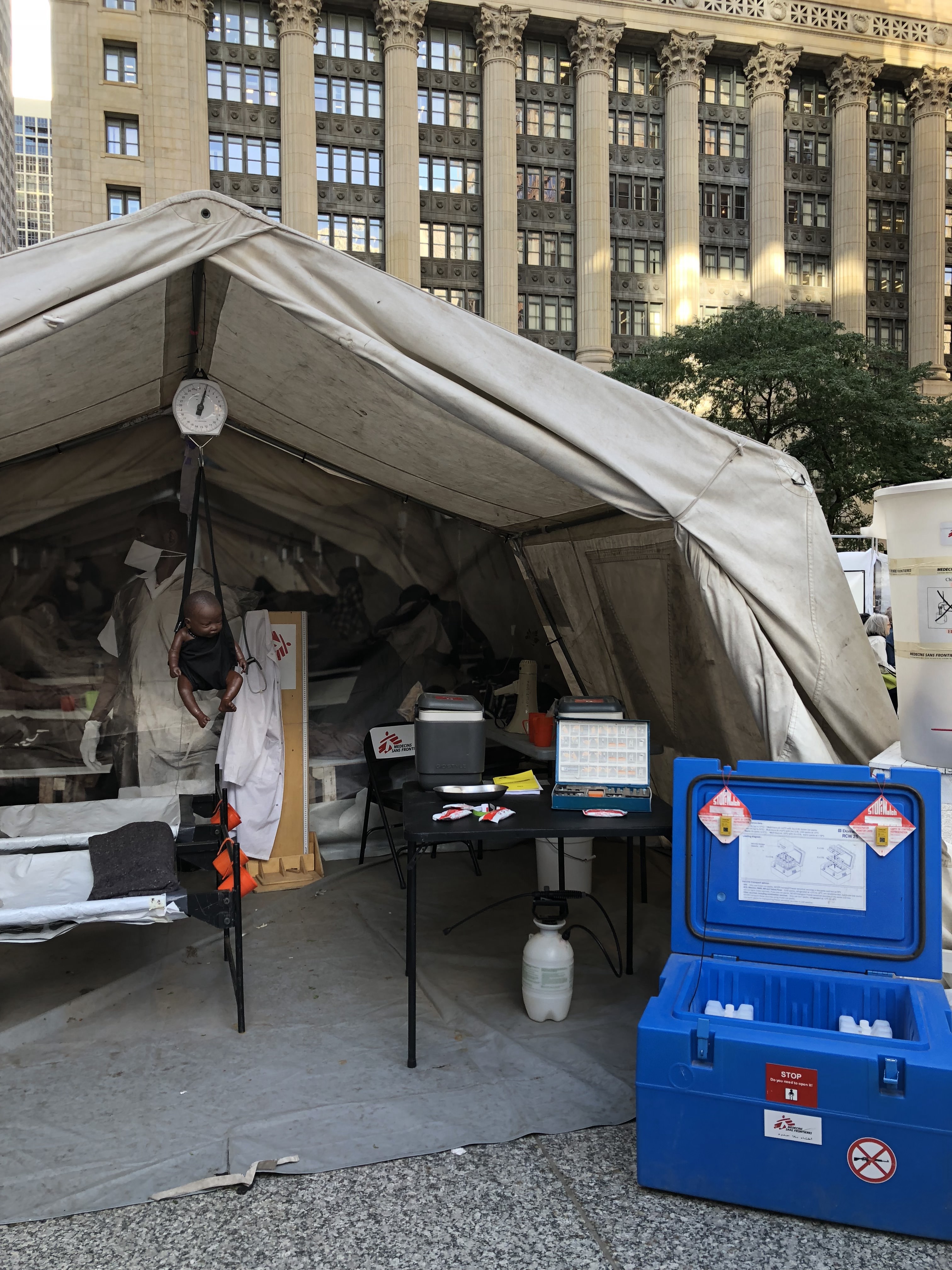 “It is the difference between having a roof and having plastic. They are stuck in camps without enough food and water to survive.

I don’t have an answer for you. What I am doing here is bearing witness and telling you what I have seen and what my life is like. I really want you to understand that the 68.5 million people are humans and they are like you and I. In the future, if any of us get displaced, I hope we get treated a lot better than those people.”

Seeking safety is not a crime.

I was the last visitor on the last day of the exhibit in Chicago. As I passed through each station, it was taken down, and the plaza was going back to usual. We all would go back home and continue our lives. But the stories I heard stuck in my head, knowing that all of it is happening right now in this moment, and for a long time to come. 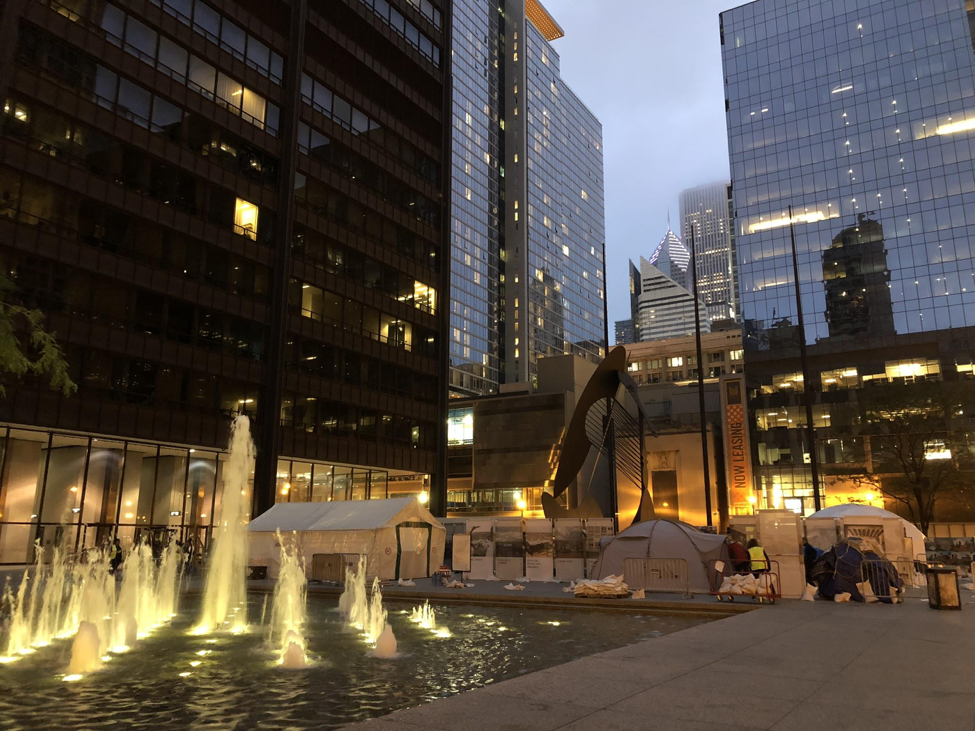 Richard Daley Center at the end of the exhibit. (Mikayla Rose Price, 14 East)