Halloween Can Be Scary. Your Night Out Doesn’...

Halloween Can Be Scary. Your Night Out Doesn’t Have To Be

At six years old, Halloween is a time filled with candy, creative costumes, and Halloween movies, like “Hocus Pocus” and “Halloweentown.” At 18, Halloween is still filled with excitement, however the nature of the holiday shifts. For some Halloween transforms from trick-or-treating to going to college parties. While celebrating the spooky holiday in this way can be just as fun, it’s important to recognize the potential for danger that can come with it.

A 2015 study conducted by Substance Abuse and Mental Health Services Administration (SAMHSA) found that 58 percent of college students have had a drink in the past month, 38 percent had participated in binge drinking, or an excessive amount of alcohol consumed in a short period of time, in the past month. Binge drinking could ignite a host of dilemmas such as a future alcohol addiction or impaired judgement and control.

While alcohol is not a defense for sexual violence, it is often involved in sexual assault, particularly at college parties. Eleven percent of college students experience some form of sexual violence while at school, according to the Rape Abuse and Incest National Network (RAINN). Over 50 percent of sexual assaults in college occur within the first four months of school, so from August through November. 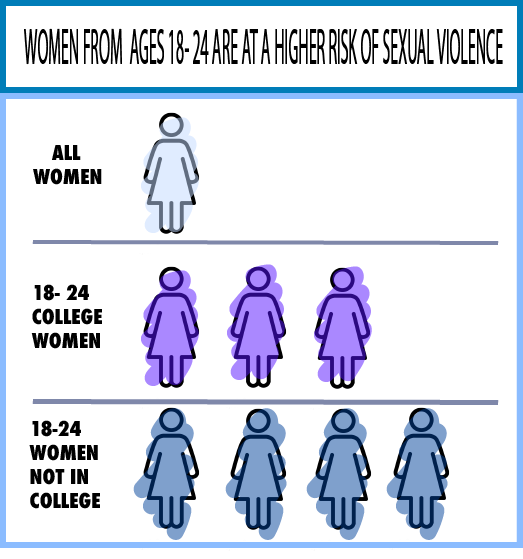 No matter how your celebrations play out, whether you go to a party or enjoy a scary movie marathon, it is important to take care of yourself and others this Halloween. Keep in mind these nine things while you celebrate the spooky holiday.

Drink if you want to, but don’t feel like you have to.

The legal age for drinking is 21; however not everyone waits until then to take their first sip of alcohol. If you are going to drink, it’s important that you do so because you want to — not because you feel like you have to. Even if you are at party you can choose to drink water or soda over alcohol (and your friends don’t even have to know).

It’s all about striking a balance — be sure to alternate between alcohol and water.

“Really the less you the drink the more fun you’ll have because the negative impacts happen the more you drink and the higher your [blood alcohol content] becomes,” said Hannah Retzkin the Sexual and Relationship Violence Prevention Specialist at DePaul’s Office of Health Promotion and Wellness.

Watch how much you drink and listen to you body if it feels like you have had enough.

DePaul senior Vanessa Gajek said that around the time she turned 21 she began paying attention to her preferences and limits. “Know what alcohol works with your body and what alcohol doesn’t,” Gajek said. “As weird as it sounds, you should take mental notes on what alcohol works for you or not when you’re out one night.”

Pour your own drink.

This is Gajek’s number one rule for herself when she goes out. “Always make sure you know what and how much you’re drinking,” Gajek said.

Retzkin suggested that students avoid drinking too much by taking it slowing and setting a limit. She also advised against drinking mixed where the contents are unknown.

“You don’t go to a party and think, ‘It would be really fun to be harmed by someone today,’” Retzkin said. She emphasized that any harm that befalls someone is never the fault of the survivor, singling out sexual violence. Harm reduction, or limiting possible threats, can be helpful in preventing sexual assault. Retzkin believes that the most powerful ways to reduce sexual violence is through primary prevention, or stopping the perpetrator, and bystander intervention.

Retzkin said that the easiest way to not assault someone is to clarify that the other person is sober and able to consent and then ask for consent. Consent is not forced or coerced and must be present throughout the whole experience. If at anytime the person you are with would like to stop, then stop. 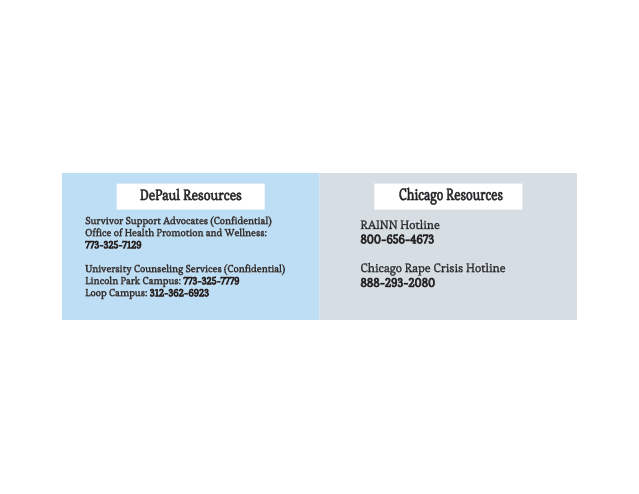 DePaul and Chicago resources to contact in case of emergency (Natalie Wade, 14 East)

Find a creative way to intervene during a situation that makes you feel uncomfortable.

“A lot of the times, we just focus on individuals, so that it’s an individual issue, but really it’s a societal issue,” Retzkin said, explaining the importance of bystander intervention. At whichever Halloween party you decide to go to, “spoiling the mood” is much better than someone being assaulted.

Retzkin explained that there are three distinct intervention types. The first is an actual confrontation, which very few are comfortable with. This is what it sounds like: confronting someone who may be putting another person in danger. While many could argue this as the most effective form of intervention, few are ready to risk their reputation or relationships by offending the potential perpetrator.

“Shift The Focus,” as Retzkin called it, follows the rule that a bystander can put a stop to a potentially harmful situation by distracting both parties. Retzkin said this can range from “spilling a drink” to “walking between people without actually saying anything or doing any confrontation.”

Shifting the attitude takes both the confrontation of the first method and the shifting from the second method. Here, bystanders examine a particular behavior and strike up a conversation on why it is wrong.

While hearing them out, do not victim blame. When your friend tells you what happened, empathize with them.

As they have enough on their plate, do not add feelings of distrust to their pain. “The first disclosure is the most powerful one,” Retzkin said. “If you disclose to someone for the first time and they ask you, ‘Why were you drinking, what were you wearing, why were you there,’ and those kinds of questions, then the survivor’s healing process is going to look a little different than if the first time a survivor discloses to someone and they say, ‘That sounds really scary. I’m so sorry that happened. You didn’t deserve that. It’s not your fault.’”

If your friend experiences sexual violence, allow them to decide what they want to do next.

Whether they choose report it or not, Retzkin said that it is important to stand by survivors every step of the way. She said that although it comes from a caring place, the option must be left open. “The crime of sexual violence is about power and taking power away from someone,” she said. “So it’s really important that we give power back to that person.”

Halloween should be scary due to the improbable threat of werewolves and vampires, not because of the fear of harmful drunkenness or assault. Regardless of age or activity, Halloween should be an enjoyable time, and taking care of yourself and those around you will only enhance the fun.