DePaul is Composting? Cleaner Plates Could Make for a Greener Campus

Food waste is more than not finishing everything on your plate. It contributes 4.4 gigatonnes of greenhouse gas emissions per year, according to the United Nations Food and Agriculture Organization. To visualize how much that is consider this — a male African elephant might weigh, at most, 6.8 metric tons. A gigaton is well over a hundred million African elephants, according to an article in The Washington Post. This is more than every country’s yearly emissions combined, except for the U.S. and China.

“With over 20,000 students enrolled at DePaul University, both the school and its students share a responsibility to stop or reduce the waste of such a vital resource, but this depends on all of us, and where [the planet] falls on the list of priorities,” said James Montgomery, an associate professor of environmental science at DePaul University.

Kaitlyn Pike, Senator of Sustainability on DePaul’s Student Government Association (SGA), said that the university has made improvements since it earned a “silver” sustainability rating in 2012. That rating came from the Sustainability Tracking, Assessment and Ranking System (STARS) that provides a framework for colleges and universities to measure their sustainability.

“In an attempt to limit our dependence on single-use plastics, Chartwells and the Bean have switched to paper and plant-based straws,” she adds.

Pike explained that the university is so confident of the improvements it’s made that it plans to try for a “gold” ranking soon. Loyola University achieved “gold” status in 2017.

The fact that the SGA has a Senator of Sustainability at all is a happy surprise to some.

“What’s the SGA’s agenda?” said Desirae Fisher, majoring in Health Science at DePaul. “It would be awesome to receive monthly or even bimonthly reviews of what they are working on.”

She’s not the only one who would like to see more information on environmental matters provided for students. “I think that the majority of students are unaware of composting so they could advertise it better,” said Michael Schmidt, environmental studies and geography student at DePaul and member of DePaul’s Urban Farming Organization (UFO).

The fact that DePaul composts might be unknown to many, but composting isn’t a new phenomenon here at the university. Composting bins were first placed in DePaul student centers by Republic, an EPA certified compost collection service, who picks up the leftovers. However, after a while, staff members realized that students were ignoring the labeled bins and composting incorrectly. As a result, the university decided to change strategies.

Now, the process starts when a student finishes their meal. After putting a plate on a conveyor belt that can be found near the back of the Lincoln Park Campus dining hall, the plate travels to the kitchen, where staff members scrape and compostables into a designated bin. 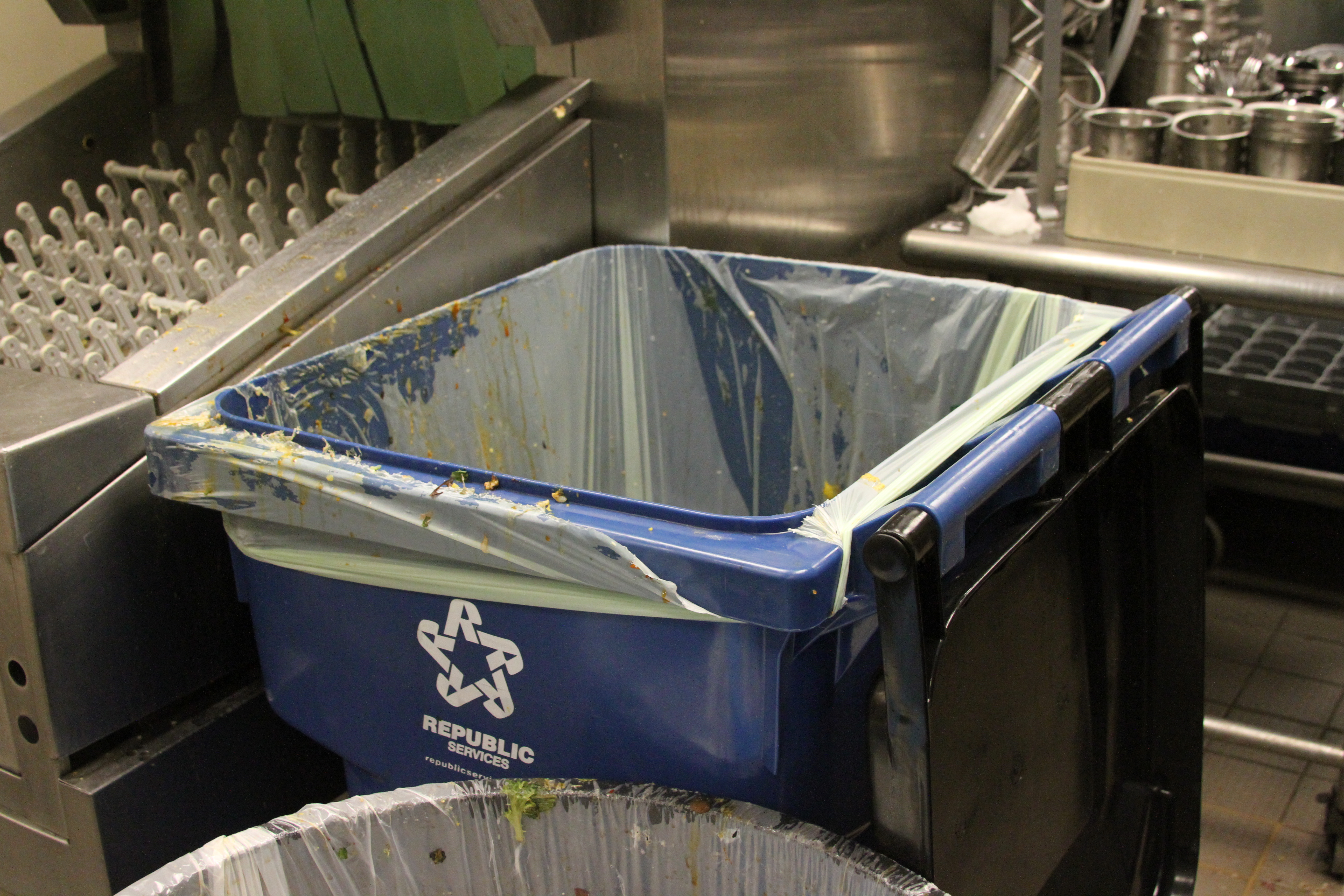 This means that “all composting at DePaul happens in the C.R.E.A.T.E. dining hall by the back of house staff,” said Pike.

Composting is only taking place in DePaul’s Lincoln Park dining hall, and not the dining hall located on the Loop campus. This could be a missed opportunity. “Composting at DePaul right now is small scale, and there needs to be more education around it,” said Maddy Robertson, majoring in environmental studies at DePaul and co-president of DePaul’s UFO.

Despite all the work being done, “composting on campus seems to be one of the less successful initiatives at DePaul,” said Connor Scoltock, who is studying for his masters in political science and environmental studies and is a member of the UFO. “The school could focus more on educating students so as to more effectively compost.”

The SGA is working to increase awareness of the composting program here at DePaul. 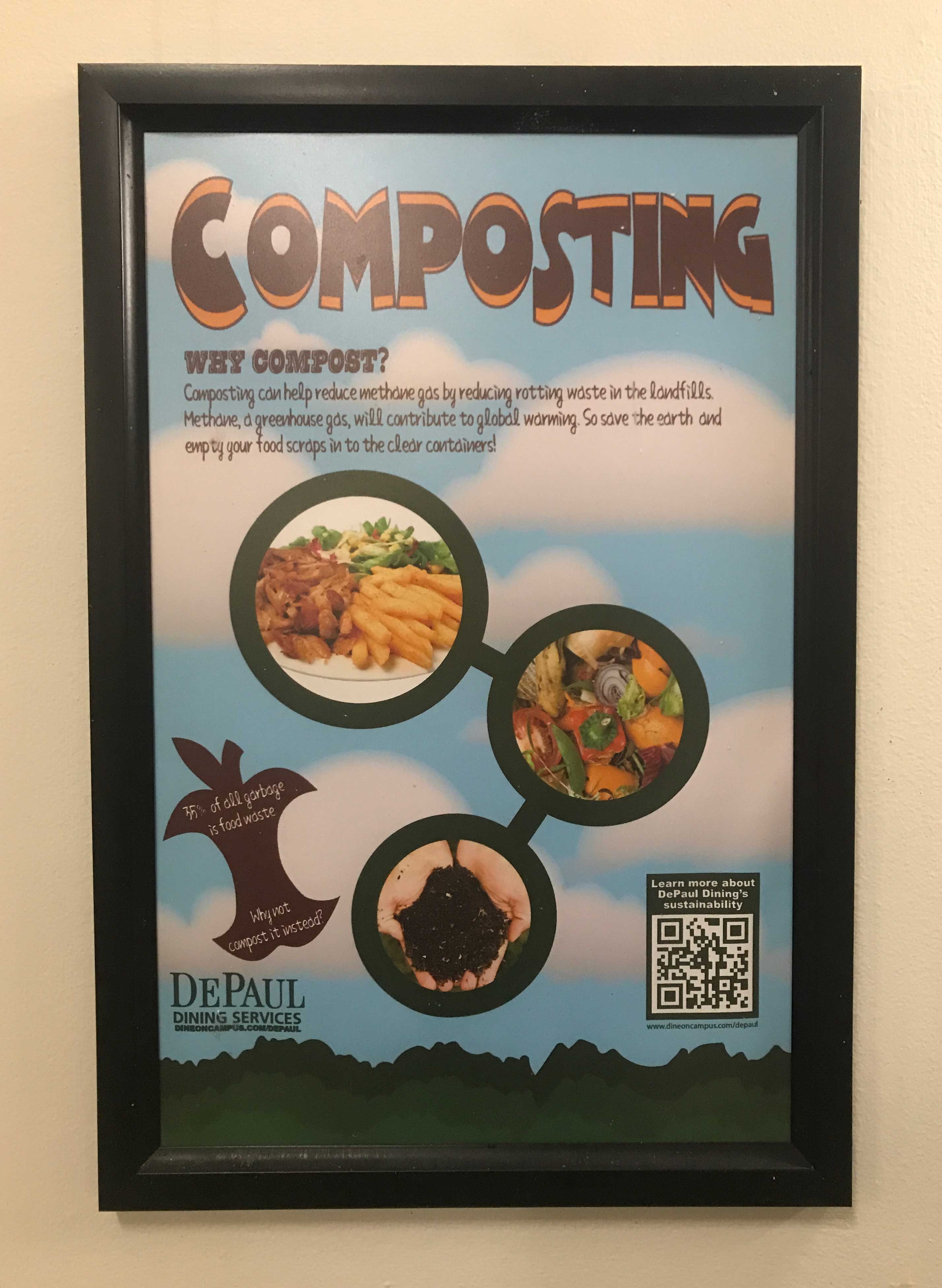 “We’ve created an online composting tour that students are able to view via our social media accounts,” said Pike. “We have also talked with dining services on ways that we can make signage more visible within the dining hall.” Thanks to the SGA, you can get a behind the scenes look at how DePaul composts here. 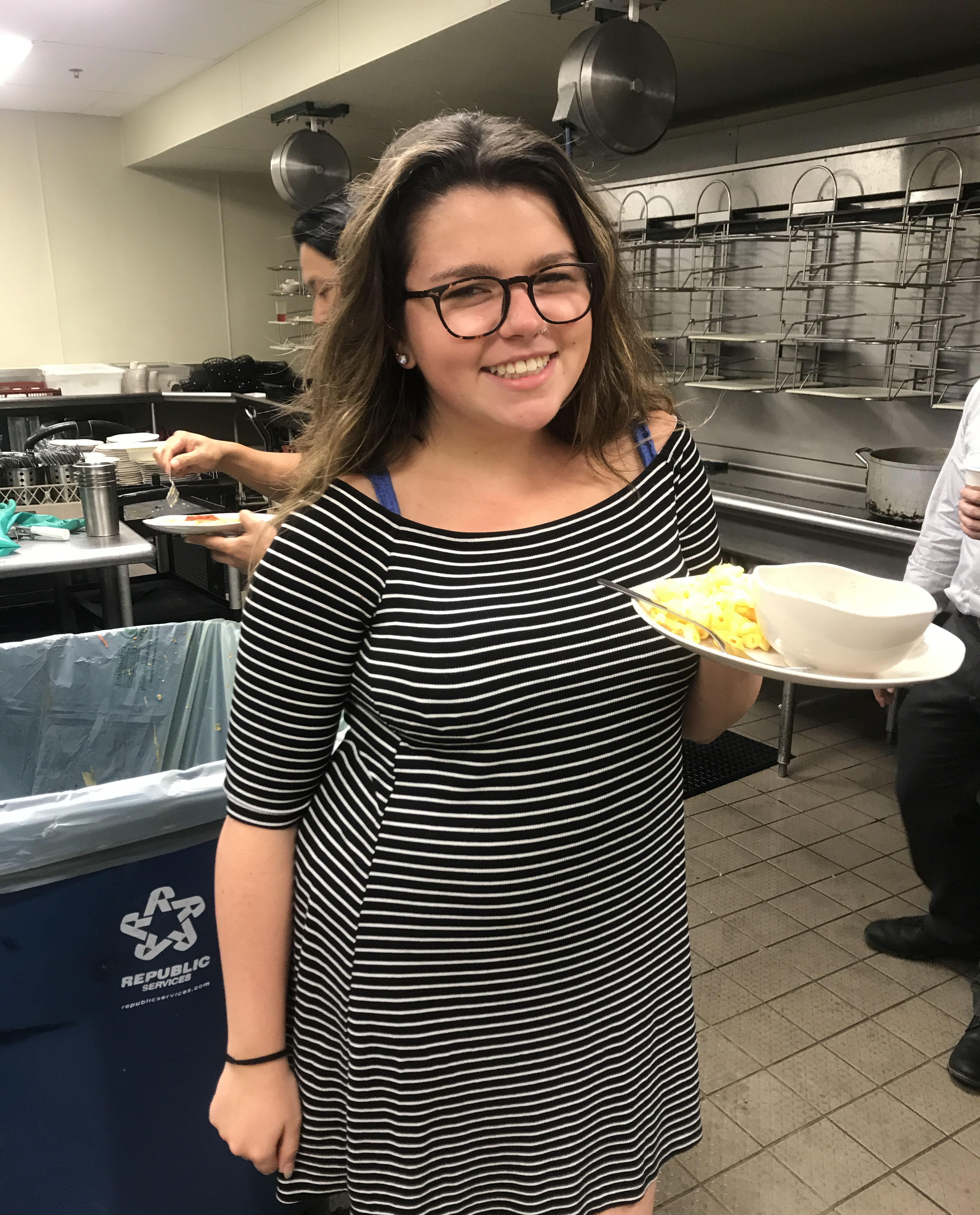 “Rick Moreci of Dining Services had told me about a month ago that new signage was being implemented in order to better communicate with students about our composting,” said Pike. Since the school removed the designated bins and reallocated the composting process to staff members, this “unfortunately led students to believe that we had stopped composting entirely.”

“If you want to see more focus on sustainability on campus, let that be known. Speak with students, professors and the facilities department,” said Pike.“Be and stay active in the student organizations that are doing things you want to see done on campus. Collaboration is key.”

Students could have more of a say about the campus’ environmental decisions than they think. The issue could be that they don’t know where to turn.

That is why, “the SGA’s goal is to increase awareness, transparency and advocacy of sustainable initiatives within DePaul University. So I listen to the students and student-run organizations and try my best to act as a facilitator between the student body and the administration,” said Pike.

“Perhaps [the SGA and UFO] could work together and share compost collected in the student center. . . or maybe the garden could potentially grow produce for use in the kitchens at DePaul,” suggests Scolton.

This wouldn’t be the first time SGA and the UFO worked together.

“We work on events during the week and we have already been in touch with Kaitlyn Pike about collaborating on more events for Earth Week this upcoming year. We are excited to collaborate!” said Robertson.

In the spirit of collaboration, Dining Services and Chartwells will be teaming up next Wednesday, April 24th, on Stop Food Waste Day. They will be hosting events that will highlight some of the environmentally friendly changes that are being implemented on Lincoln Park’s campus. There will be compost-related events and education surrounding food waste in general.