What the World’s Biggest Gamblers Can Teach ...

Wander into most Australian pubs and you’ll find the TAB. Usually a single room or in its own section of the bar, the TAB consists of tables, chairs and TV-lined walls broadcasting racing and sports going on around the world — essentially, a room dedicated to sports betting. TABs exist in bars, hotels, at sporting stadiums and even as stand-alone store fronts where Australians bet their money on all kinds of sports, from rugby and soccer to the “dish-lickers” (dog racing) or the “gallops” (horse racing).

“Australia is a sporting culture in general, and we’ve always been gamblers,” said Glenn Paton, former sports betting writer for The Profits and an avid Australian sports bettor. “Even the average joe here puts a bet on,” Paton said.

Betting is everywhere, and Australians love to gamble. It’s estimated that over 80 percent of Australians engage in some form of gambling, and Australia bets and loses more per capita than any country in the world.

From 2016 to 2017, Australia bet 209 billion Australian dollars as a nation — and lost AU$23.7 billion of it, according to data from the Queensland Government Statistician’s Office. This averages out to losses of AU$1,251 per Australian adult, 40 percent higher than Singapore, the world’s next biggest gambling country. One Australian dollar is worth about 0.7 United States dollars.

And even as Australia saw a slight downturn in the gambling market from 2016-17, the sports betting industry grew, reportedly generating AU$1.06 billion in winnings for the industry during the fiscal year.

Major sports betting companies like Sportsbet, William Hill, Ladbrokes and Bet365 have saturated the Australian market, advertising heavily during televised sports games and across all media platforms. Earlier this year, the NBA partnered with Australian online sports betting company BetEasy. The NBA now promotes BetEasy on its online platforms across Australia, and BetEasy gets to use the NBA’s betting data and assets in their marketing. It’s not unusual to see NBA players like Chris Bosh and Allen Iverson in Australian ads promoting the TAB and sports betting.

In an era of convenience, mobile betting has also taken the lead as the fastest-growing form of gambling in Australia. While many Australians still bet in person at traditional TAB outlets, the ease of mobile betting has made gambling more accessible, with a perfected user experience across sports betting apps that make betting on games as simple as a few clicks on your handheld device.

In short, betting and gambling are embedded deep into Australian sports.

“It’s all around you,” Paton said of the sports betting culture and the commercial betting companies that dominate the Australian market, hooking customers with deals they can’t turn down, like an offer to sign up with just AU$20 and receive AU$200 in free bets.

“They lure you in, and once you’re in and have a win, it’s all over,” Paton said. “You’re pretty much hooked.” 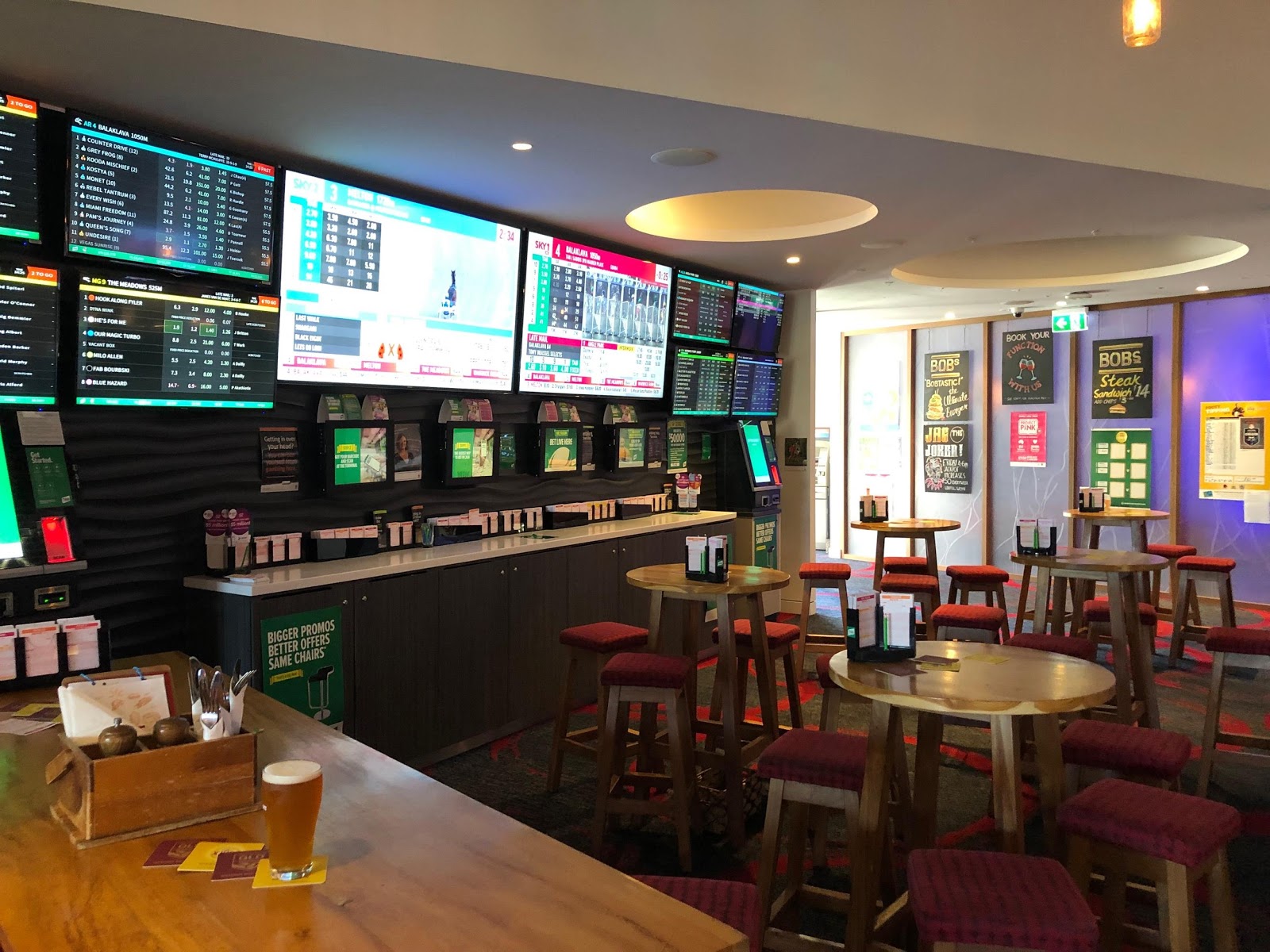 The TAB inside a local pub in Brisbane, Australia. Photo by Nick Shand, May 2019.In May 2018, the United States Supreme Court struck down a 1992 federal law that banned sports betting in most states, opening the door for state-by-state legalization and prompting mass discussions about the future of U.S. sports betting and the estimated $150 billion that American’s currently (and illegally) bet on sports.

For those who favor legalizing sports betting across the U.S., the move is inevitable. People are already gambling, so why not bring it into the open and regulate it? While many of America’s professional sports leagues fought the spread of sports gambling in the past, the Supreme Court ruling saw some of them change their positions, like NBA commissioner Adam Silver, who now maintains that legal sports betting systems could monitor unusual betting activity and allow leagues to charge a 1 percent “integrity” fee on bets.

PricewaterhouseCoopers estimated that betting across all states could bring in $100 billion in bets per year. The New York Times reported that the congressional National Gambling Impact Study Commission estimates profits closer to $400 billion.

Either way, the U.S. is poised to far surpass Australia’s sports betting market. But some are skeptical about how much money sports betting will actually bring in. While supporters of legal sports betting tout increased tax revenue for states, the Associated Press reported that using even the most optimistic projections, sports gambling would amount to less than 1 percent of most states’ budgets. And some states that have legalized sports betting since the Supreme Court ruling are well behind revenue expectations.

Michael Lynch, professor of hospitality at DePaul University, believes that bringing U.S. sports betting out into the open where it can be watched and regulated is a good thing. Lynch worked in the casino industry for 12 years and is currently completing a dissertation on the legal implications of overturning the Professional and Amateur Sports Protection Act.

Still, he doesn’t think legalized sports betting is going to bring in the profits that have been advertised.

It is, he points out, a way to get people into the door at casinos, who come to place a sports bet, stay for a meal and maybe play a few machines. And for teams and leagues, sports betting keeps fans engaged — if you have a bet on a game, you might be tempted to watch for longer, increasing ratings and ad revenue.

Back in Australia, sports betting makes up about 12 percent of the gambling market. According to John Mangan, director of the Australian Institute for Business and Economics, because gambling brings in about AU$1 to AU$2 billion per state, Australian states are reluctant to curb gambling — despite the fact that surveys regularly show the Australian population as a whole wants gambling to be more controlled.

Whether or not U.S. states see the projected profits is not really what’s going to drive them to adopt sports betting, Lynch believes. Rather, it’s more of a domino effect. If Indiana and Iowa are drawing sports bettors from Illinois, Illinois is going to legalize sports betting, too — or else lose money to neighboring states.

“Legislators from Illinois are going to say ‘Even though it might not be the highest of profit ventures, we don’t want our money going to Iowa or Indiana,’” Lynch said. “We want our money to stay here.” 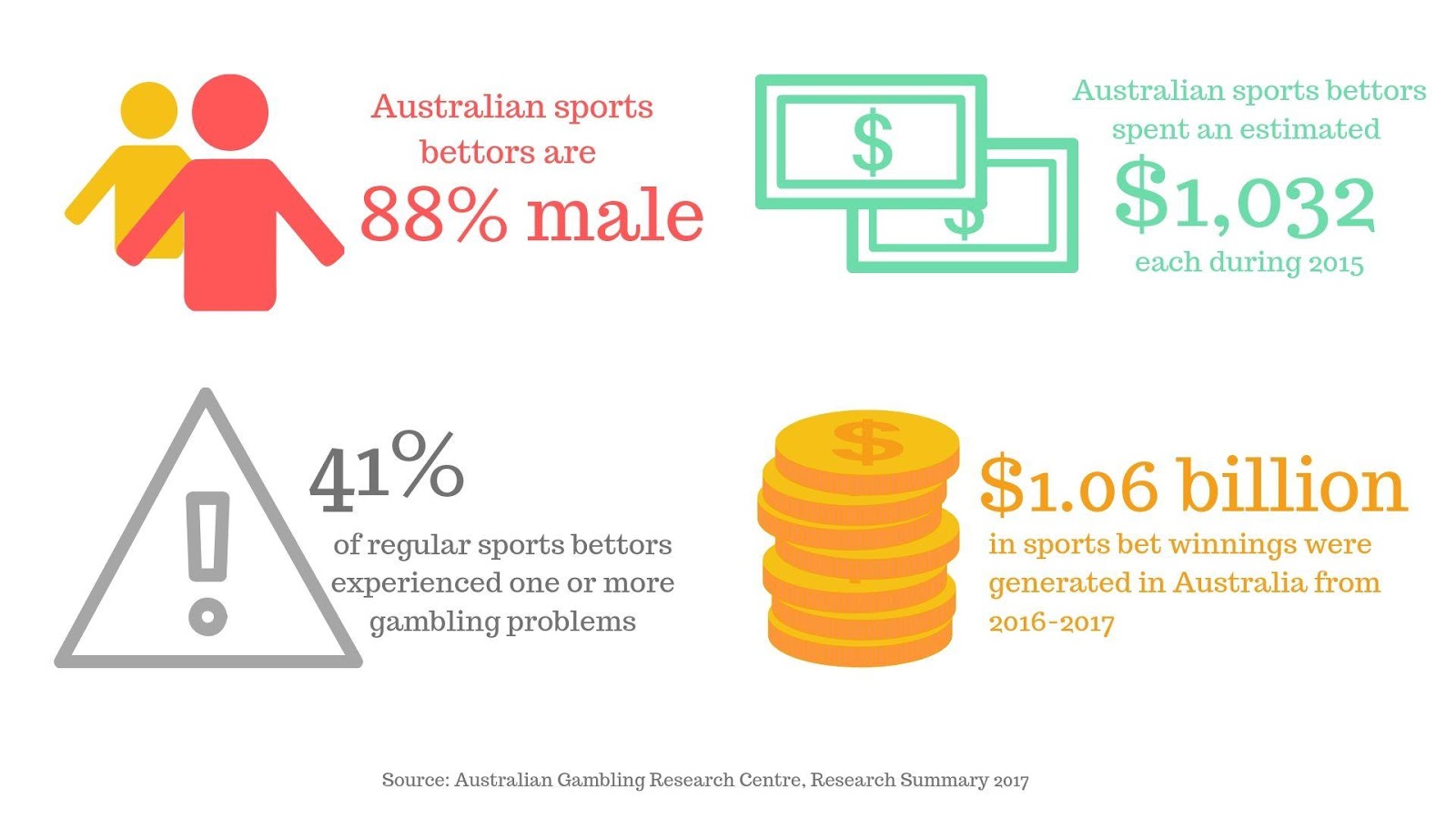 Australian sports bettors like Paton will be the first to admit they love to bet. “It’s almost scientific,” said Paton, who spent years writing about games and providing insights and recommendations for fellow bettors.

But Paton, like many other Australians, are also aware the system is flawed.

“It’s a huge problem here,” Paton said of Australia’s betting and gambling culture and the gambling addiction problems the country faces. With mobile betting especially, Paton believes there is almost a notion that players are betting with “monopoly money,” in contrast to in-person betting at TABs that require the bettor to hand over physical money.

Data from the Australian government showed that 41 percent of regular sports bettors experienced one or more gambling-related problems in 2015, and one in five sports bettors felt they might have a gambling problem. The Australian Broadcast Corporation reported that gambling counselors are increasingly seeing people addicted to the ease of gambling on sports and racing through their mobile devices.

While Lynch believes that the vast majority of U.S. gambling is and will be done responsibly, he agrees it will have to be watched closely as it’s legalized across the states.

“I would say for the addiction professionals, they are going to have to be ready for a paradigm shift,” he said.

The U.S. market also stands to become just as saturated with sports betting ads and marketing campaigns as Australia. While ads and marketing aren’t necessarily a problem, some experts like Mangan see them as deeply intertwined with Australia’s gambling culture and gambling problems.

“The advertisements almost treat gambling as a sport itself and glamorize it,” Mangan said.

Conversely, using the real-time data that betting agencies keep on customers, a betting agency can restrict a player’s bets once that player starts winning too much or too often. In some cases, betting agencies will even block or shut down the accounts of their most successful bettors. Some blocked Australian bettors turn to illegal offshore operations, instead.

Sports betting is a business, and betting agencies are set up to make a profit. New Jersey, the first state to allow mobile sports betting, raked in almost $2 billion in sports bets in the nine months after the Supreme Court ruling made it legal. Full-scale legalized sports betting is currently happening in eight U.S. states, while six other states have passed legislation to move towards legalization. According to experts like Lynch, it’s just a matter of time before the rest of the states follow suit.

In a country that’s been legally betting for much longer, Australia has only one state — Western Australia — that tightly controls the betting and gambling industry. Because Australia has cracked down on other powerful industries like tobacco and guns, their lack of gambling regulation is surprising to some. But Mangan believes there’s growing disquiet over moral hazards and the incentive for corruption that betting has fostered in Australia.

“To be honest, the thought of such a powerhouse economy like the U.S. taking up large scale sports gambling is very concerning,” Mangan said. “I hope the U.S. does not follow us in their lack of legislation.”