The Ins and Outs of Two Prison..

Travel the World Through Its Traditional Cuisine W...

Travel the World Through Its Traditional Cuisine Without Leaving Chicago

Chicago is the city with the third largest population in the United States. It is the home for over two million Americans and it hosts people from every corner of the world. People that come to study, to work, or just to pursue a better life. The great thing, for Chicagoans, about living in such an international city is that these people bring their country, traditions and food to us. This allows us to travel the world through conversation, friendship and appetizers. This guide introduces you to some international college students currently living in Chicago. They talk about themselves, their hometown and their country’s cuisine — something that, as you will see, they are passionate about. 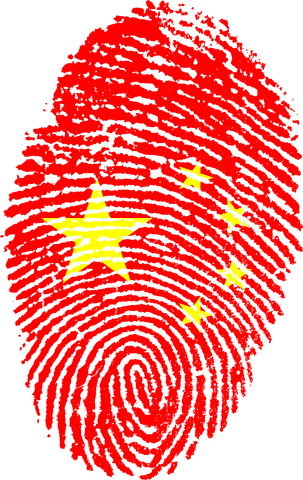 Alice is 24 years old and was born in northern China in a city called Fushun in Liaoning province. She came to Chicago to get her master’s in accounting at DePaul University.

China is a very big country with lots of different cuisines. Rui talked about the traditional food in most cities in Northeast China. “It usually has a large amount of food in one dish. This type of food is called  菜量大 which literally translates to large amounts of food,” she said. “Some are more salty, some are more sweet, so it can have more flavor and a strong taste (口味重)”.  The reason why stew (炖菜) is eaten in northern Chinese cities as Fushun is because the winter in Fushun is extremely cold and it allows people to conserve warmth. “In the past, people mostly only had one large pan to cook, and there were a lot of people in one family — only these amounts of food where enough for a whole large family,” said Rui.

Where do you go eat Liaoning food here in Chicago?

According to Alice, one can only find 锅包肉 (pot of meat) in a few Chinese restaurants such as 北方风味 which translates to Northern Taste and 北国饭店 with the English name of Potsticker House. These three restaurants are Alice’s favorite, and even though they are not as easy accessible via CTA as other restaurants in Chinatown, they will give you the opportunity to try authentic food from Northeast China. The easiest way to reach them would be by car. 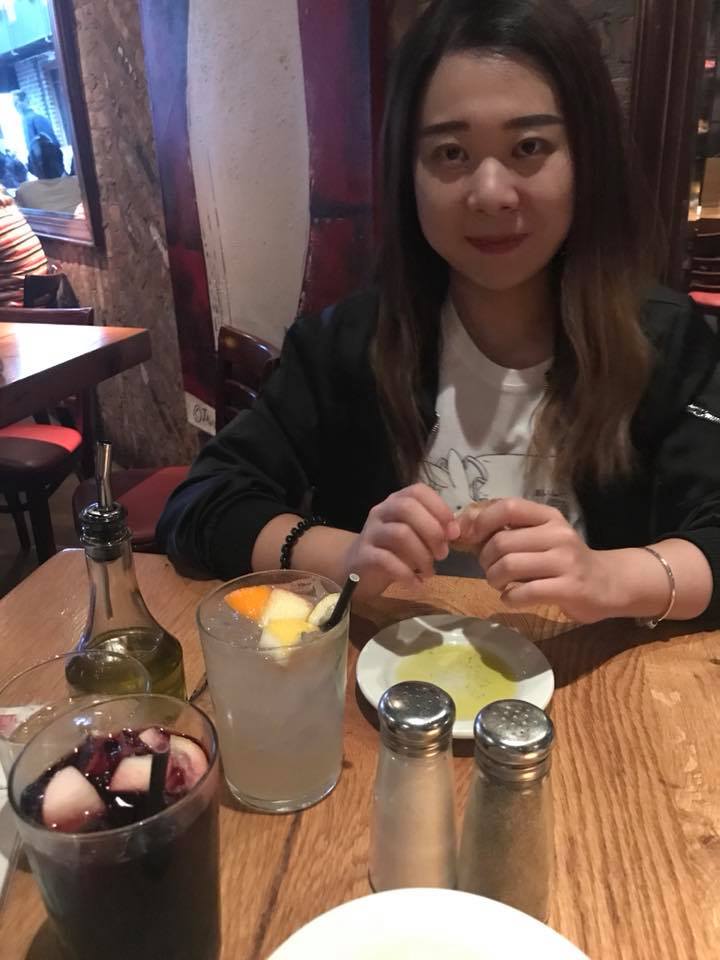 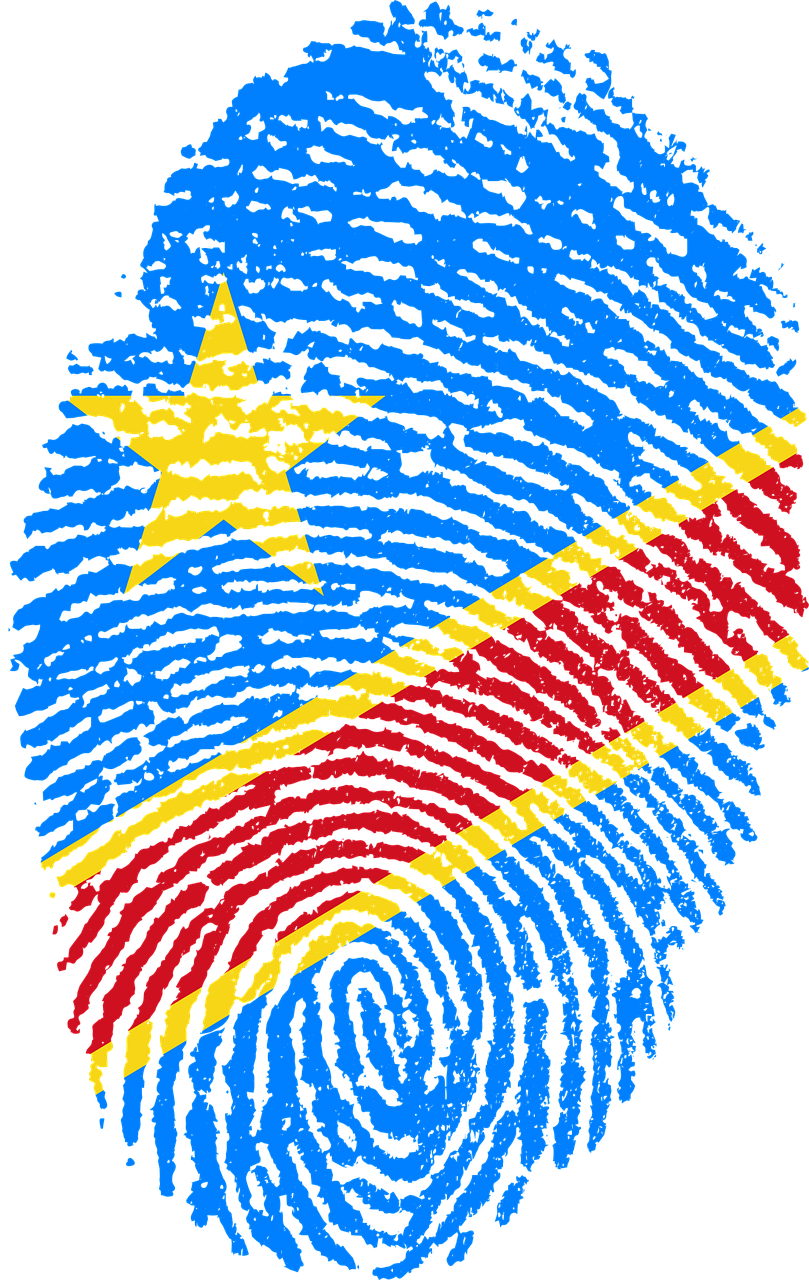 Kafarhire was born in eastern Congo, in a city called Goma, and then he moved to the capital city of Kinshasa. He has been in Chicago for almost five years and is currently earning his master’s degree in international studies at DePaul University.

Where do you get Congolese food in Chicago?

“We don’t have any place here in Chicago where I can get Congolese food, but I know for sure Champaign, Illinois, has [Congolese food]. There is a big Congolese community, so it is very easy to find Congolese food there,” said Kafarhire. “We don’t have a restaurant, but we have friends and family so you can easily get some ingredients from back home, ship it from Congo to Champaign and then everyone knows how to cook.”

According to Kafarhire, all Sub-Saharan African cuisine is similar, so finding these types of dishes is possible at a lot of different African restaurants. He recommended multiple restaurants on Broadway and Wilson. Specifically, he said “Vee Vee’s,” which is a Nigerian restaurant, but it is frequented by people from multiple African countries.

Ordering is pretty simple. First you must choose fish, meat or the vegetarian options. According to Kafarhire, the fish is most likely tilapia. He is particularly fond of it because as a Congolese person he grew up eating the fish from all of the rivers and lakes in his hometown. “You cannot find it here, so when my family comes they bring me some. If you like fish I can recommend the fish with plantains and cassava leaves.” Kafarhire also recommended pounded yam, a side dish that is usually eaten with vegetables. “We have different names in Africa for this but we all eat it. The names depend on the country. In Nigeria it’s ‘pounded yam’ and in Congo it’s ‘foo foo.’”

The typical dish consists of “beans and cassava leaves go with rice, spinach and other vegetables go with the pounded yam, and of course, you need to have meat on the side or fish,” said Kafarhire.

What do you crave the most from back home?

“The dish I crave the most is the cassava, Congolese fish and rice. I don’t know how to cook cassava. My sister knows and she is in Boston so when I go visit her she always makes it for me,” he said. 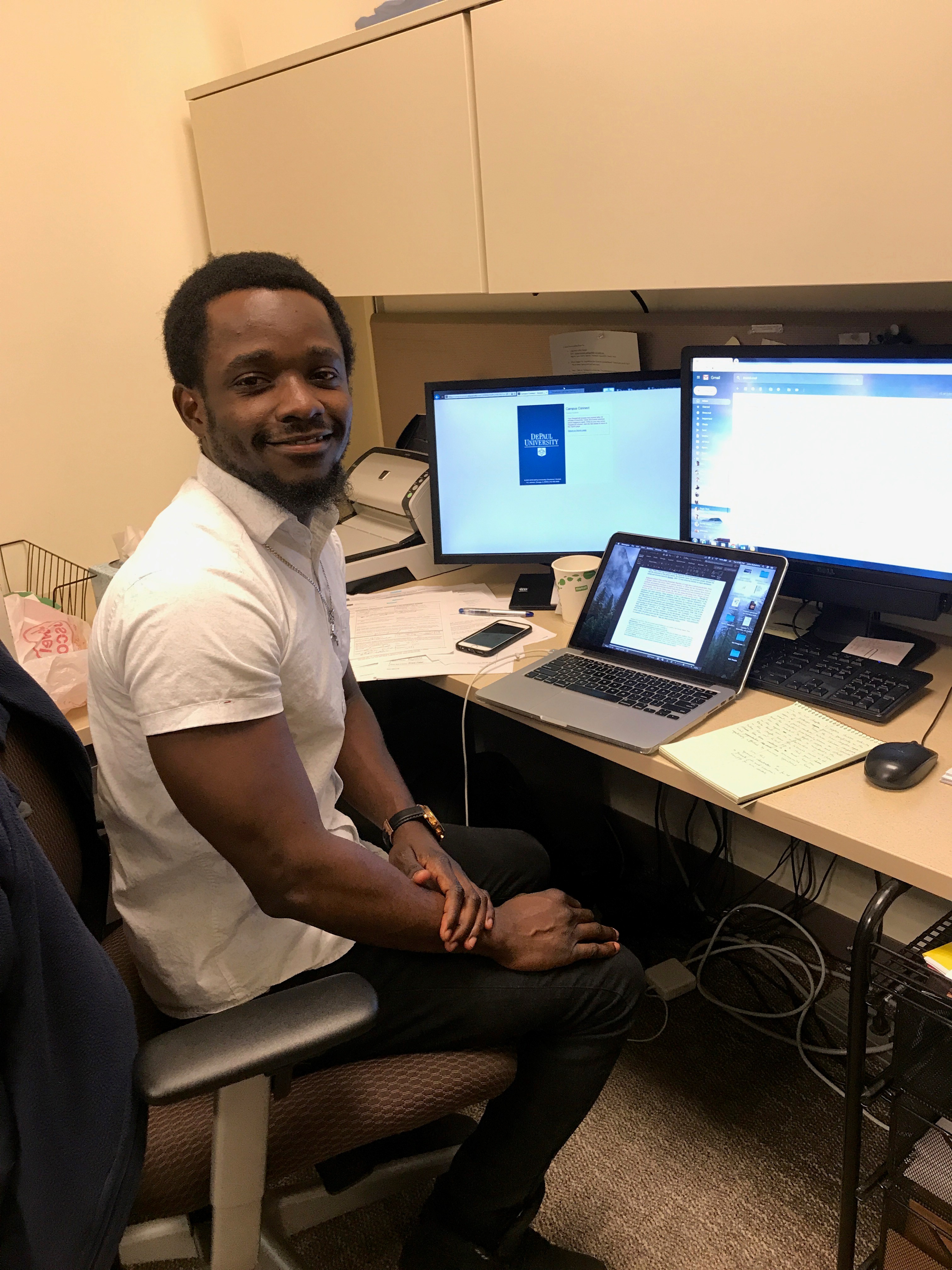 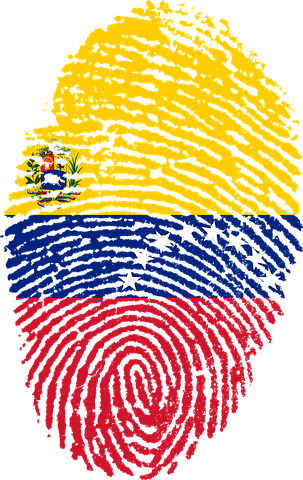 Rodriguez was born in Caracas, the capital city of Venezuela. He has been in Chicago since September 2015. He came to earn his bachelor’s degree in economics at DePaul University. Something that most people don’t know about his hometown is that it is also called “The City of Red Roofs,” because a lot of the roofs are made from red tiles. He is also very proud to come from the country with the most “Miss Universe” titles.

Where do you get Venezuelan food in Chicago?

After he mentioned that he is a very good cook and that his Venezuelan food is fabulous, Rodriguez recommended two restaurants to get authentic Venezuelan food.

The most well-known Venezuelan restaurant is called “Bienmesabe,” and there are two locations. There is one on Adams Street next to JJ (26 E. Adams St.), which is an express location and the big restaurant on Montrose. There is another restaurant on the West Side of Chicago called “Rica Arepa.” Rodriguez recommended the arepa, which is what Venezuelan food is mostly known for.

Rodriguez recommended getting an arepa. “It is easy, so easy to pick up and just eat it,” he said. The arepa is a sweet or unsweet corn pancake, and it can be cut in half to create a sandwich-like meal that can be filled with so many different ingredients. “My favorite one is catira,” said Rodriguez. “In Venezuela, catira means ‘blondie.’ It has shredded chicken and cheese. Another one of my favorites is ‘Sifrina,’ it has another kind of chicken salad with avocado and cheese.” Rodriguez also recommends the cachapas, which are folded corn pancakes filled with cheese. For a more traditional dish, Rodriguez recommended the pabellon. “It is basically plantains with black beans, rice, and shredded beef.”

What do you crave the most?

“What I crave the most from home is the cheese, here it feels plastic-y, kinda fake. The cheese back home feels more real and it is not as greasy,” said Rodriguez. 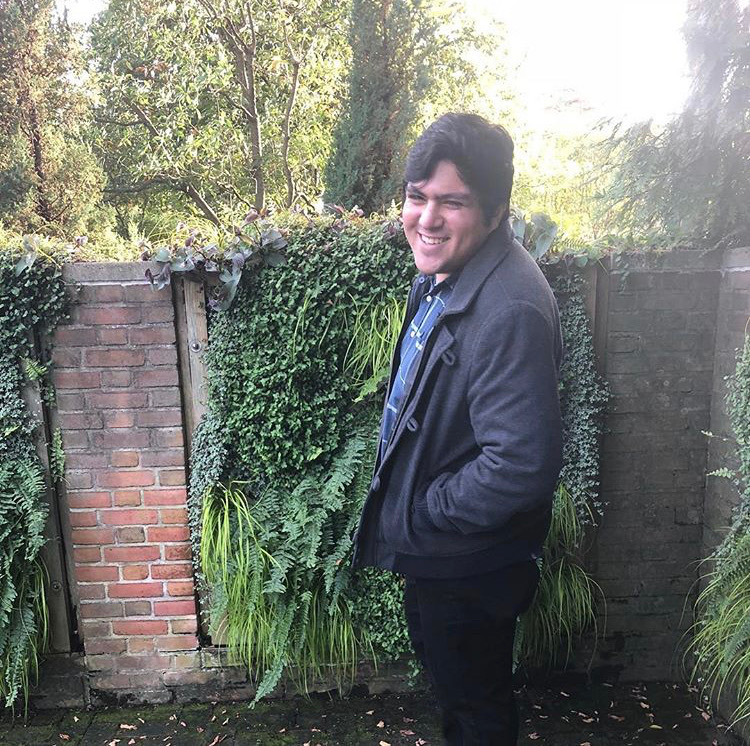 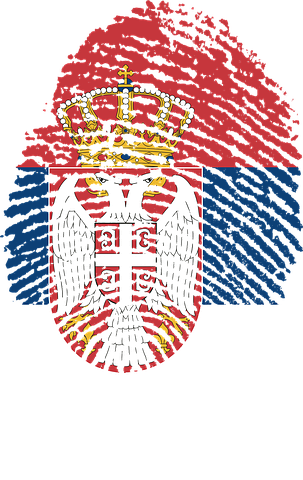 Mandic was born in Novi Banovci, Serbia.  Mandic has lived in the United States for most of her life. “By now America feels like home.” Mandic recently turned 22.

Where do you get Serbian food in Chicago?

“There are some very good authentic Serbian restaurants in Chicago. My favorites are Beograd Cafe or Stefan Bar and Grill,” she said.

“The Serbian diet is very full of meat. Smoked meats like prosciutto and cheeses would be appetizers, a main dish could either be cevapi (Serbian sausage), pljeskavica (cevap burger), sarma (stuffed sour cabbage with beef and rice) or roasted lamb or pig,” she said. “Pig has been so important in Serbian cuisine and history that there was even in 1906 a trade war between the Austro-Hungarian Empire and the Kingdom of Serbia called the ‘Pig War.’”

“Our famous salad is diced cucumbers and tomatoes covered in cheese,” said Mandic. Serbian cuisine also includes a lot of baked goods called burek, or pita. “It’s like a pie with meat in it or cheese and it’s not sweet at all, it’s all salty foods,” said Mandic.

Her personal favorite, and her recommendation, was the sarma because it is good and healthy. 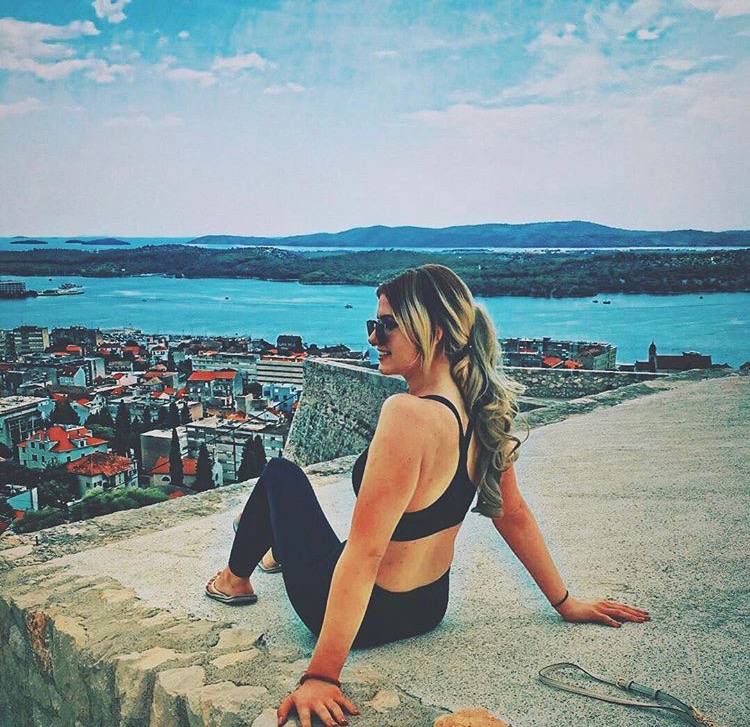 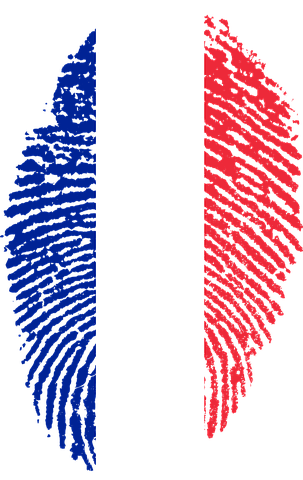 Alfieri was born in Aix-en-Provence in the South of France. Her hometown is famous for hosting the biggest population of college students in France. She has been in the United States for four years. When she was sixteen years old, Alfieri went to boarding school in upstate New York. After that she came to Chicago to study for her bachelor’s in music business at Columbia College.

Where do you go get French food in Chicago?

“I know there are a lot of French restaurants in Chicago like Mon Ami Gabi, but I have never personally been. Where I have been, and I do recommend, is La Fournette. It is an authentic French bakery,” Alfieri said.

Alfieri recommended the classical croissant or the pain au chocolat, which is a croissant with chocolate inside. While most Starbucks and local coffee shops also sell this type of baked good, La Fournette has the quality and flavor an authentic French bakery has.

What so you miss the most about food in France?

“What I miss the most about food in France is that it is delicious and it is cheap. Life is cheaper in general,” Alfieri said. “You can go to the store and get a sandwich and not only will it be super cheap but also so good.” 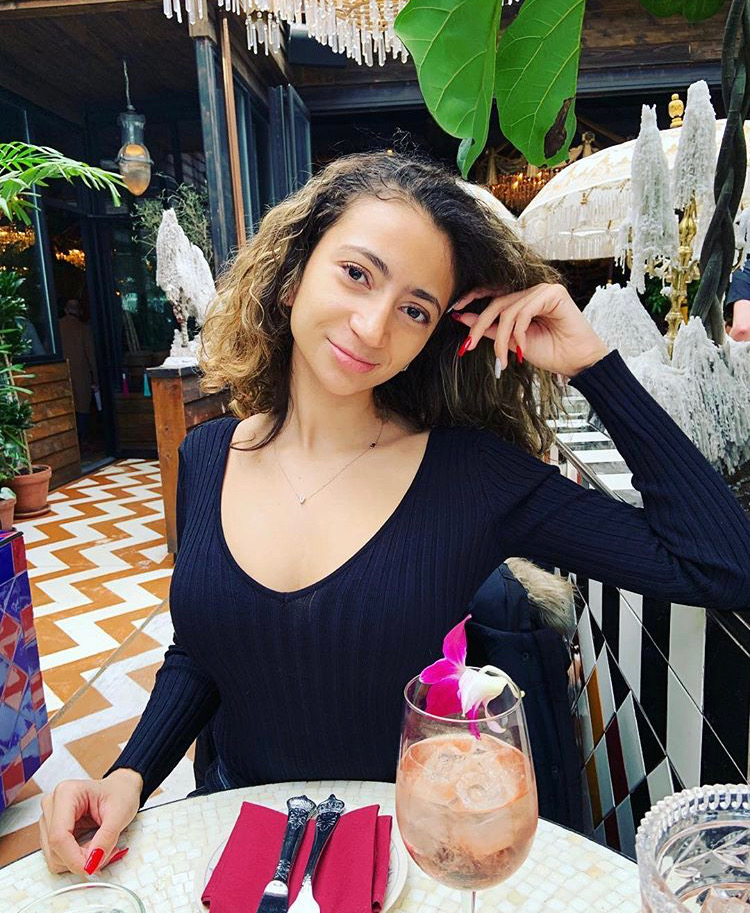 Header by Natalie Wade with graphics designed by 588ku and SANGUINE1024 at https://pngtree.com