Francesca Mathewes and Patsy Newitt reported from Talman Elementary School in the Gage Park neighborhood on Thursday. They also live tweeted their reporting. 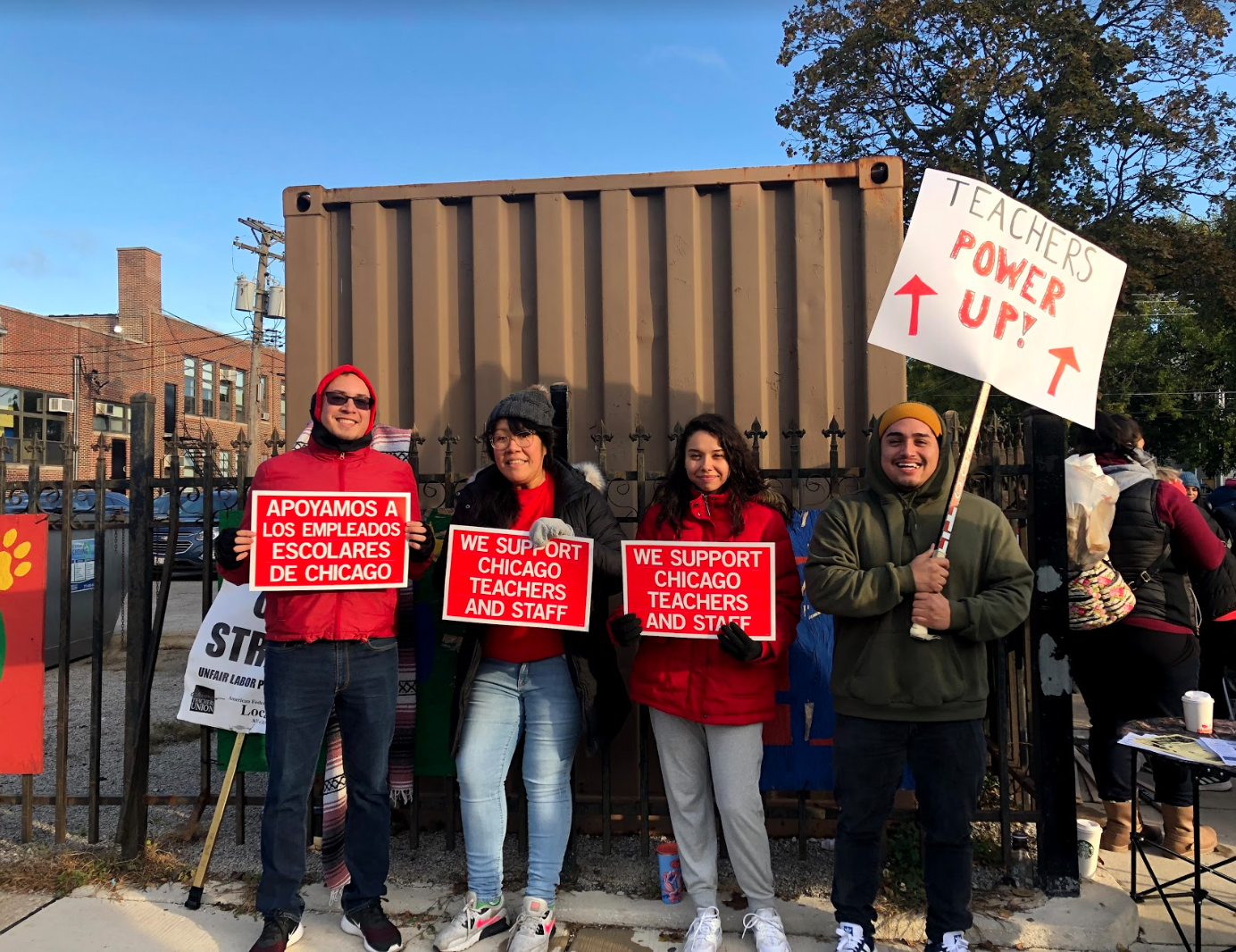 The Chicago Teachers Union (CTU) and Service Employees International Union (SEIU) strike entered its eighth day on Thursday, October 24, after “tentative agreements” had been reached on a variety of issues but none of their “top priorities.”

Mayor Lori Lightfoot told the Chicago Sun-Times Editorial Board that she would not cave to secure a teachers contract  — refusing to give in to what she refers to as a CPS bailout.

Previous district offers have fallen short of the CTU’s requests, including ensuring staff positions like librarians, nurses and counselors and caps on class sizes, which are estimated to increase the $7.7 million budget proposed earlier this month by $2.4 billion over three years. According to a CPS instagram post this morning, the district has a new proposal, which includes adding a full-time nurse and social worker for every school, investing millions to lower class sizes in high-need schools and investing millions to support students experiencing homelessness.

Thursday marks day six without school, with an estimated 300,000 students out of class. Those on strike are returning to the picket lines after a larger demonstration downtown yesterday, which climaxed at a protest outside of City Hall during Lightfoot’s first budget address.

Strikers at Talman Elementary in Gage Park collected around a fire in a circle of chairs on W. 55th and S. Rockwell streets, cars honking support as they passed by. The group roasted hot dogs and played pop radio hits — tired, but unwavering. 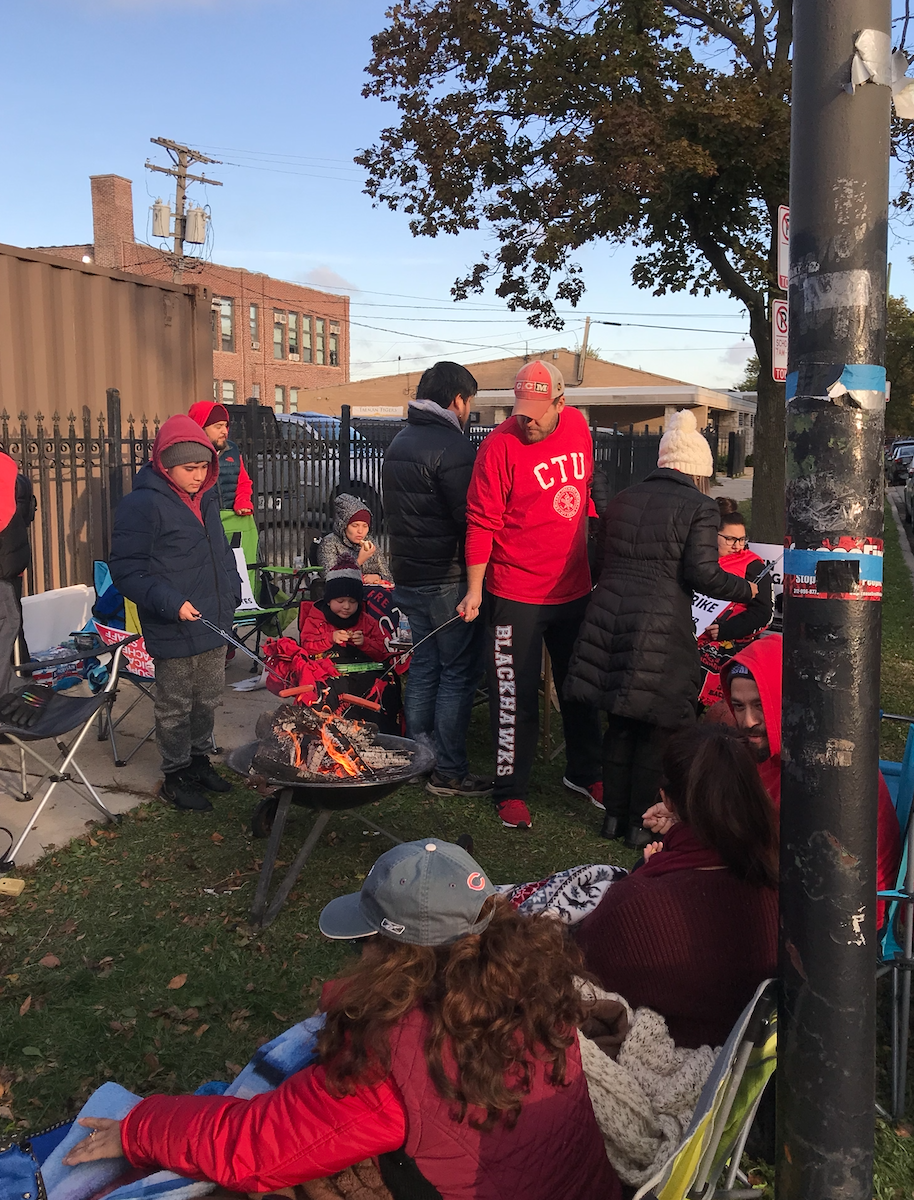 “We’re all tired,” said Bill Khlumsky, special education teacher at Talman. “We would much rather be back in the classroom than standing out in the cold… At the same time, we’re not willing to give up on our students.”

This was echoed by other Talman staff. “We’re physically, mentally and emotionally tired but not defeated,” said Leticia Ortiz, a preschool teacher at Talman.

Teachers cited wanting to go back to work, but feel they can’t until they’ve secured better conditions.

“We prefer to be at work,” said Gloria Araujo, special education classroom assistant. “We miss our students and I’m sure they’re missing us.”

Both Khlumsky and Araujo are specifically concerned about the readjustment of their special education students. They likened the transition to summer — having to re-establish routine and behavioral standards.

“By the time they get back it’ll have been maybe even two weeks,” Khlumsky said. “They’ll have lost those routines they established.”

These routines are critical, Araujo said, because they require one-on-one attention from a support staff that’s limited. The strike will likely put them behind.

Araujo is also concerned with social readjustment, expecting the loss of schedule to confuse students.

“I really do believe that [special education] kids are wondering why they’re not getting on the bus,” Araujo said. 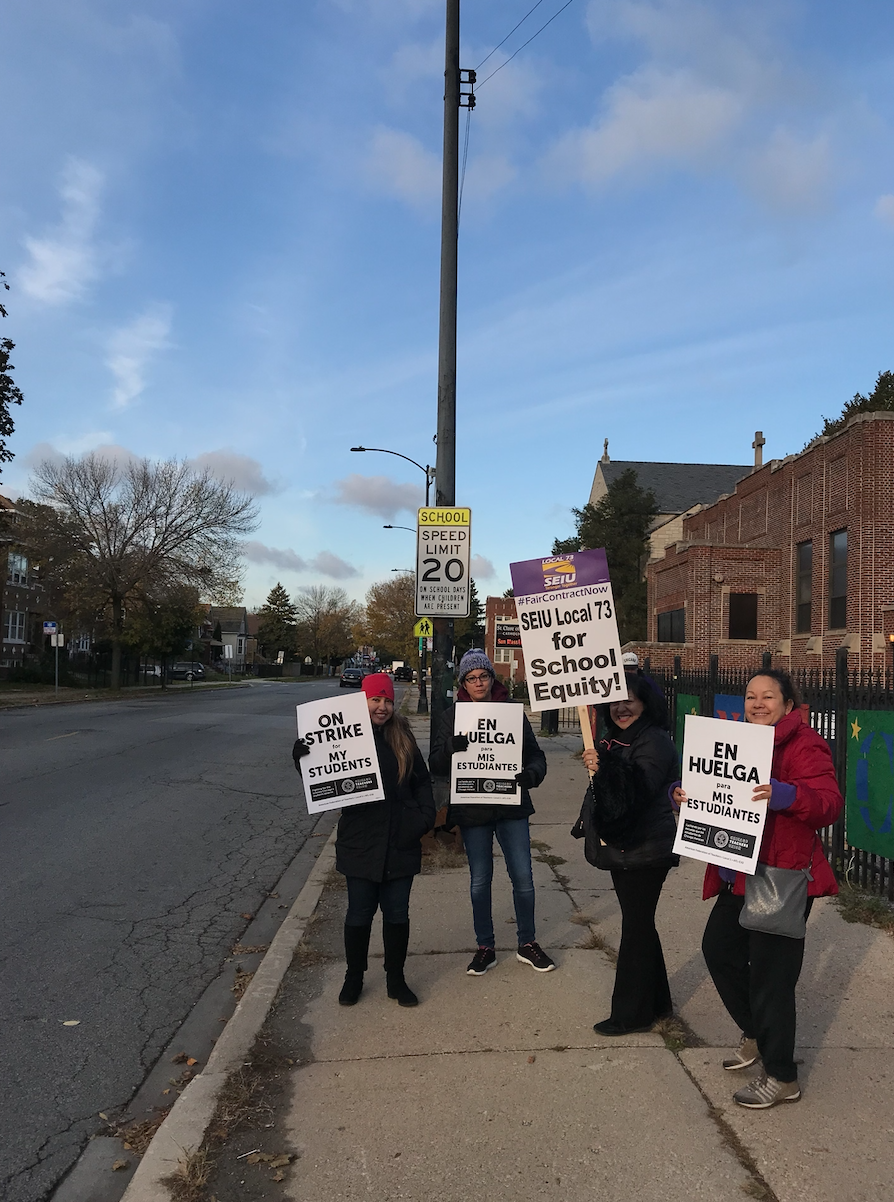 The teachers on strike at Talman reiterated the larger demands of CTU — more prep time, better staffing and more resources for students who need them.

“We want more resources for our students. We want nurses in every school, full time. Not one that just comes in once a week to finish paperwork,” Ortiz said. “If a kid busts his lip or something, we have to stop instruction to take care of it.”

She also mentioned the reality that some CPS students enter the classroom every day with unresolved trauma, creating barriers to learning.

“We need counselors in every school to take care of students that are going through trauma, who need that support every day,” she said. She also mentioned libraries and librarians to staff them as resources many schools are in need of.

“Some schools have libraries, but not all of us,” said Cynthia Ruiz, another teacher at Talman.

“We already spend hours of our own personal time staying after school, coming in early or taking work home to do it. We take personal days to finish work at home because we’re not able to do it here,” Ortiz said.

As of this morning, there was no end to the strike in sight and teachers said they will continue to picket until their demands are met.

“If we back down now, then we’re back to the broken system that we’ve had for years,” Ortiz said. “We’re sending the message that this is the time, the moment to make a huge difference. To better the education system for our students, parents, teachers and staff.”