In her newest film Knives and Skin, writer and director Jennifer Reader takes teen horror-comedy to new heights. The film had its Chicago premiere on October 18, 2019, as part of the 55th Chicago International Film Festival. The sold-out AMC River East theater reacted loudly throughout the film with gasps and bursts of laughter punctuating nearly every scene. It’s effective at making people laugh, cringe and move closer to the edge of their seat. The neon-drenched film is reminiscent of Riverdale and Twin Peaks with a sprinkling of B-movie moments and an of-the-moment feminist edge.

Knives and Skin is a hell of a ride. The story is kicked off by the sudden disappearance of Carolyn Harper (Raven Whitley), a marching band member at the local high school. Everyone in the school, including Carolyn’s mom who teaches there, comes together to solve the mystery. Chaos ensues as affairs unravel, secrets come to the surface and things get a little mystical. The large ensemble cast allows Reader to explore the high schoolers’ lives at school and at home, capturing the angst alongside tough family issues. 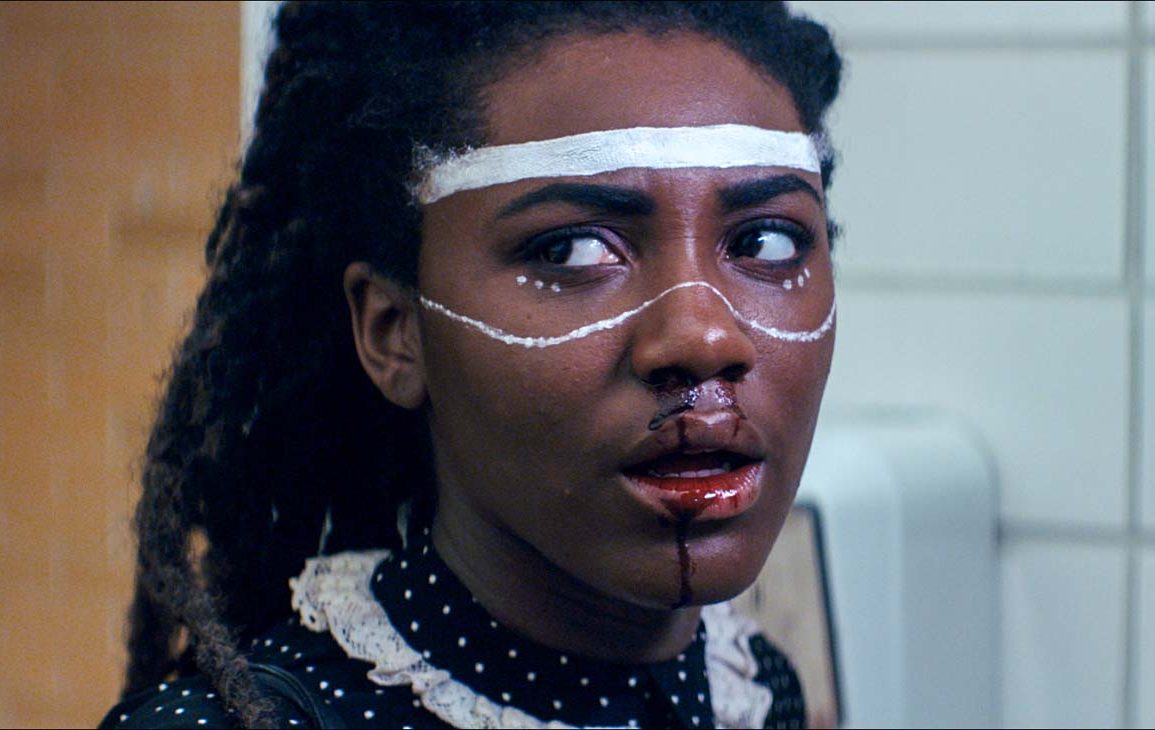 Everyone has their own way of processing grief and traumatic events like Harper’s disappearance. Knives and Skin shows the ripple effect on the community. One missing girl affects everyone in the town, with each person experiencing extra stress on top of their personal struggles. The three leading ladies, Charlotte (Ireon Roach), Joanna (Grace Smith) and Laurel (Kayla Carter), are dealing with a mom having a nervous breakdown, hidden queer desire, creepy older men and parents having affairs to name a few things. But, even with such heavy topics, Knives and Skin doesn’t present as a dark, sullen movie. The quippy dialogue and strong visual choices make it feel like a new teen comedy with noir and horror elements.

Reader manages to do something unusual for a high school movie: she takes teenage girls seriously. She doesn’t sanctify, infantilize or purify them. She lets them be real teenagers. They experiment with makeup, rebel against their parents and act impulsively; all the while processing the fear and grief that comes along with their classmate’s disappearance.

Knives and Skin is extremely ambitious, melding genre conventions and taking risks at every turn. Jennifer Reader has created a one-of-a-kind movie that gets a little messy at times, but in the best way. From its somewhat cringey one-liners to the character’s avant-garde styling, the film is doing a lot of things at once. Some may be turned off by that, but for others, it makes the viewing experience extra special. And that’s really what this film is: an experience. The visuals and characters will stick with viewers for long after the credits roll.

Knives and Skin will be released in U.S. theaters on December 6, 2019.