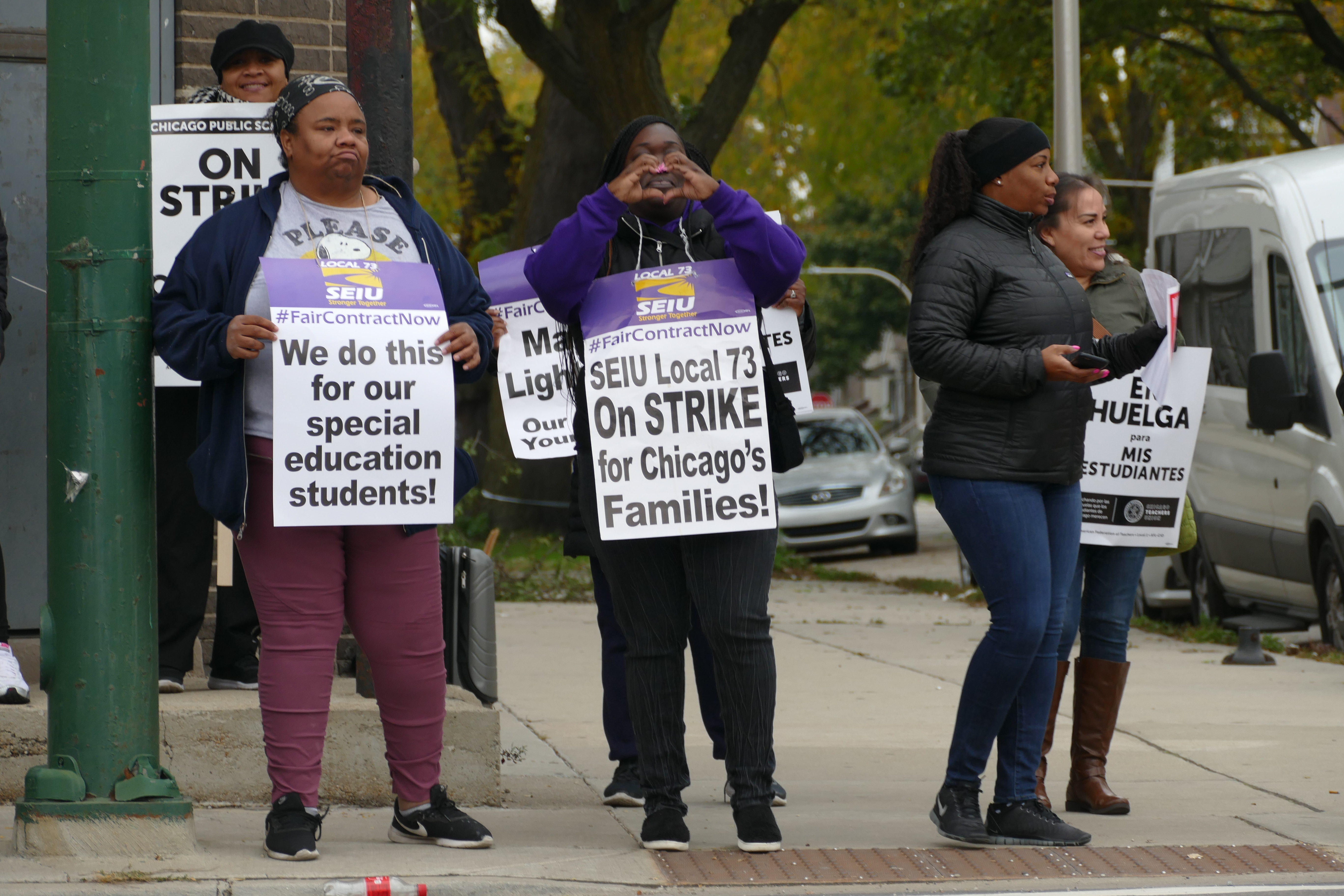 Tilden CTU and SEIU strikers stand on the corner of 47th and Union (Marissa Nelson, 14 East)

Special Education Classroom Assistants, or SECAs, have also been on strike since October 17, and are unionized through the Service Employees International Union (SEIU) Local 73. They’re on strike for better pay for SECAs, assurance that SECAs are not pulled away from their job for other school duties, ending the use of companies Sodexo and Aramark to manage the work of custodians and increased benefits such as paid holidays.

CTU formed in 1897 as the Chicago Teachers Federation, but didn’t host its first strike until 1969 — 50 years ago. CTU has been on strike a total of 11 times since then — and it looks like this year’s strike could be its longest yet. Tilden has a rich history in Chicago. The building, which opened in the 1880s, has served as a CPS building for more than 100 years, and has seen the city through all 11 strikes. 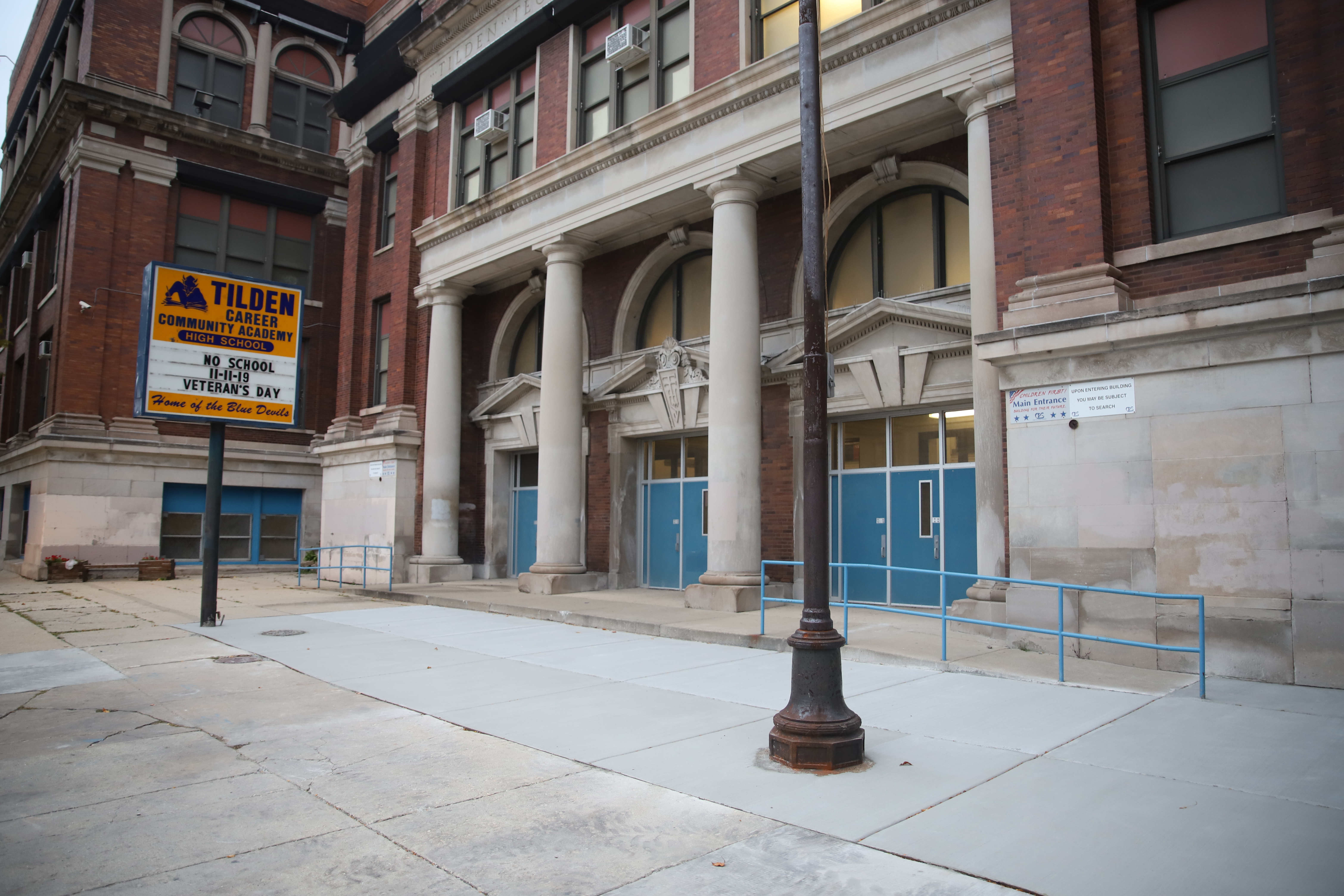 Tilden is a neighborhood high school with deep roots in its surrounding communities of Canaryville, Fuller Park, Back of the Yards and Englewood.

At the picket line members of both the CTU and SEIU discussed their roles as educators, the emotional and financial stress of working in an understaffed school and working through trauma both in their own lives and as support figures.

Today, special education teacher Krystle Saylor said Tilden has around only 200 students. Even so, Saylor and the other educators echoed concerns heard at other picket lines around the city this week: they don’t have enough support staff to help all of their students — whether counselors, nurses, social workers or paraprofessionals. 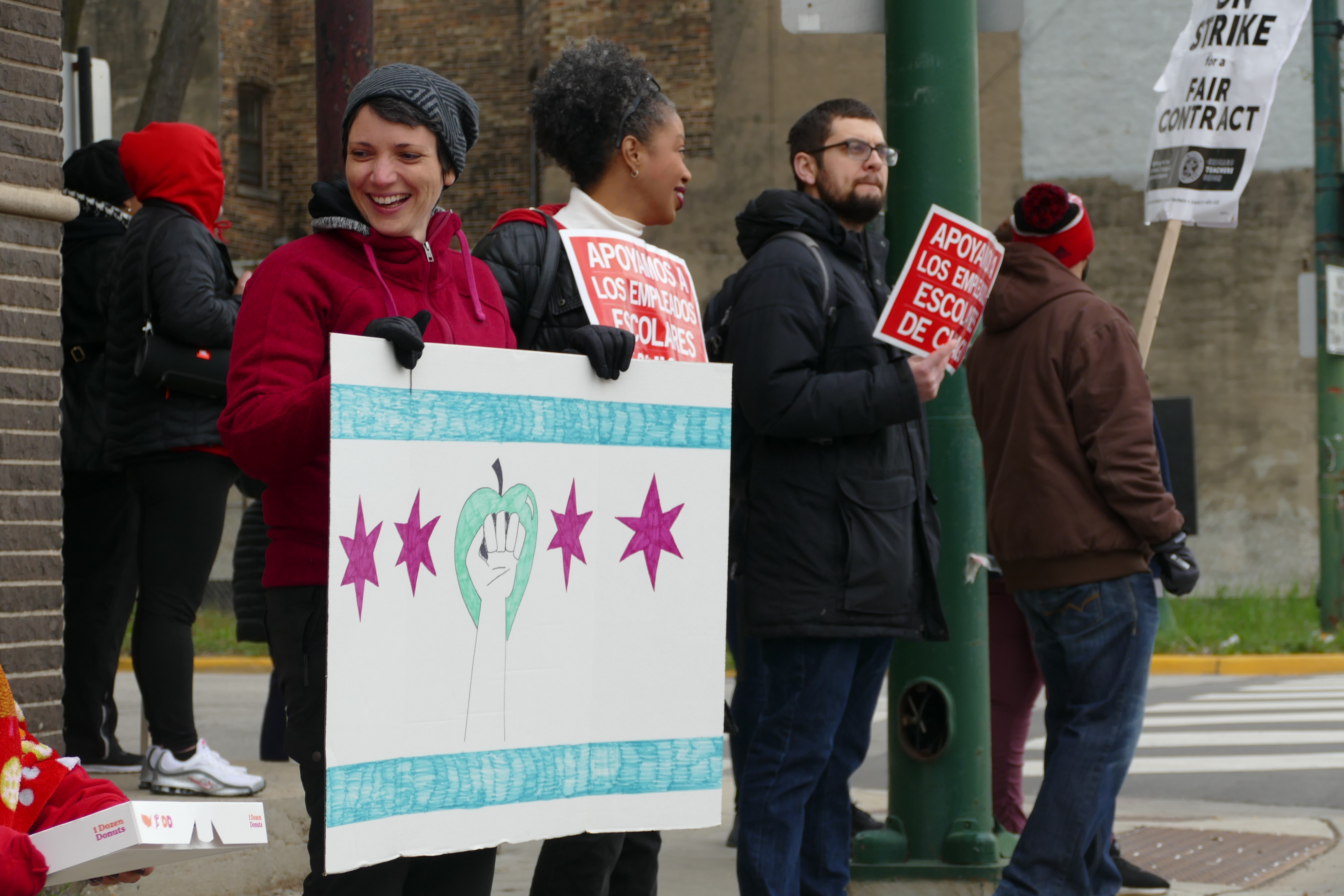 An IEP is an individualized education program that eligible public school students receive. It’s a legal document that maps out a student’s special education plan, from individualized instruction and support to services necessary for a student to be successful in school.

The educators emphasized Tilden’s need for more counselors and social workers — or at least ones who work every day. Their students bring trauma they have experienced with them to school, or sometimes traumatic events occur that affect the whole school. Perry said each of the 16 years she has been at Tilden the school has experienced a death, whether due to gun violence or something else.

This isn’t something they are prepared to help students through. However, without consistent support staff, they are forced to. One student’s death stood out to the educators. Delaina Benson, a SECA at Tilden, said the student was loved by everyone. When he died, everyone from the teachers and staff to the students were affected.

Tilden had to call a crisis response team because they only had one social worker there consistently, Saylor said. The students weren’t comfortable around them because they didn’t know any of them, she said.

“If we had had a social worker at that time, if we had had someone the kids were comfortable to come and talk to, they wouldn’t have been on our shoulders,” Benson said. “I literally had three students on my shoulder crying. Literally, I’m a paraprofessional. I don’t know how to console these students in a way that is professional, but I can console them as a mother.”

Benson, who said she works multiple jobs to support herself, said she feels SECA employees aren’t valued by the city or CPS. She is one of three paraprofessionals at Tilden, she said.

No matter the emotional or financial strain put on SECA employees, they and other educators at the school say they continue to support their students as best they can. This often includes buying food, paying for bills or purchasing other necessary supplies.

“We always have taken care of somebody’s bills, I myself have paid somebody’s bills while I was going through foreclosure myself,” said Donna Perry, a special education teacher. “We have put groceries in kids’ hands to take home to their families, dog food even. And you know what everybody looks forward to to senior year, prom. How many proms have we paid for over the years and the clothes to go with the prom and the hair.” 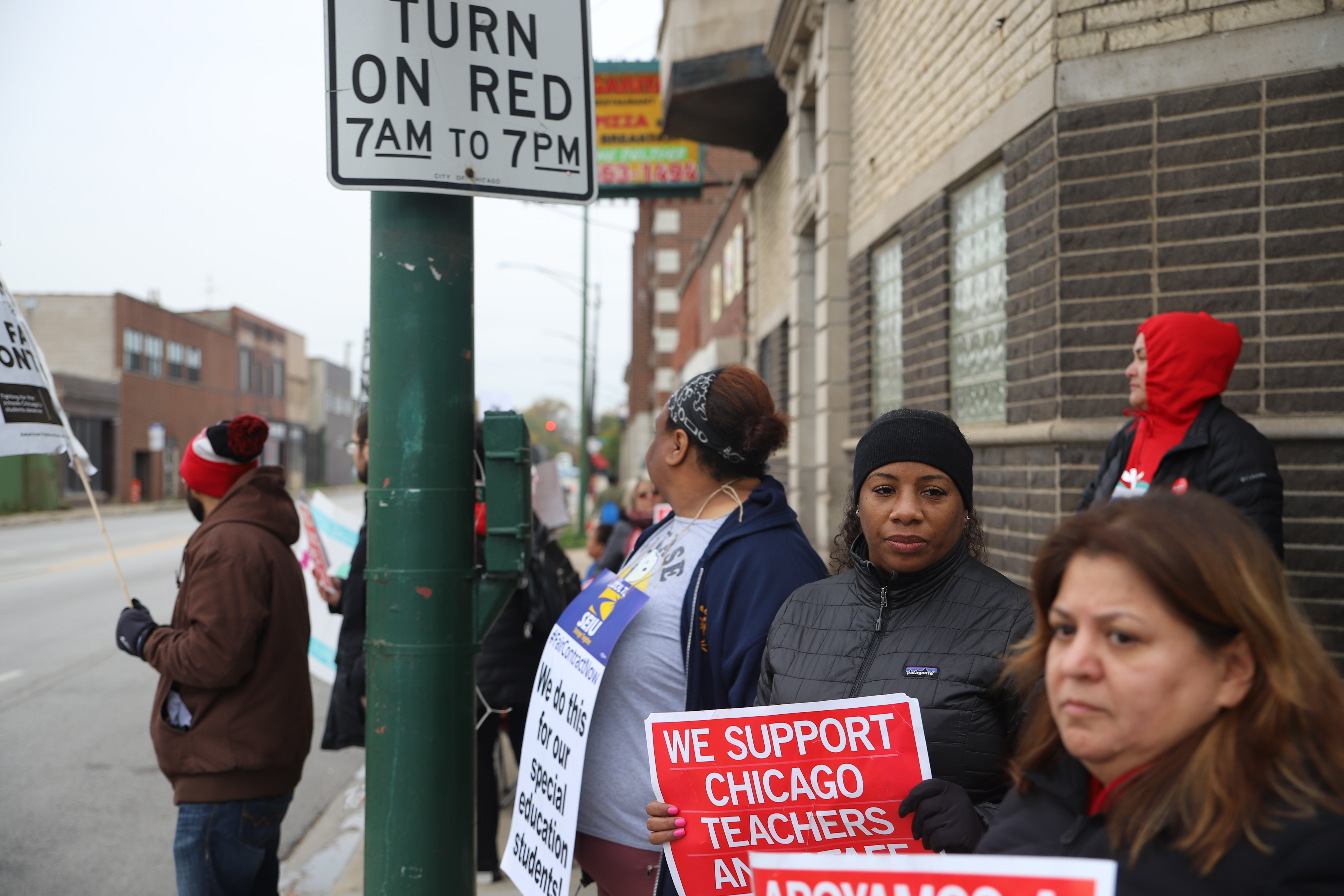 On Friday negotiations continued but no contract agreement was reached. However the union said they are closing in on the final issues and they have reportedly received written proposals for class size and staffing.

Negotiations continued into Saturday, with a roughly 14 hour session that wrapped just before midnight. With no agreement reached, both sides still felt school on Monday was a real possibility for the district. They began negotiating again on Sunday.

Saturday, CTU President Jesse Sharkey said the union and the city were close to an agreement — only $38 million apart.

“Philosophically, we are in agreement that we want our schools to have more of what they need,” she said. “Where we are far apart is the ‘how,’ not the ‘what.’ How do we get there while maintaining a level of financial stability and responsibility for the district’s finances?”

Meanwhile, a judge ruled that if classes aren’t back in session, cross-country runners can’t compete in postseason events. This is because of an Illinois High School Association rule that prohibits athletes from participating if their schools are on strike. However, three CPS football teams might still be able to participate in playoffs, as long as they are able to hold three practices before the game.

In the afternoon CTU and SEIU Local 73 members led a march downtown that ended at the Buckingham Fountain. During the rally, Chicago Police Department police officers blocked them from walking onto Lake Shore Drive. 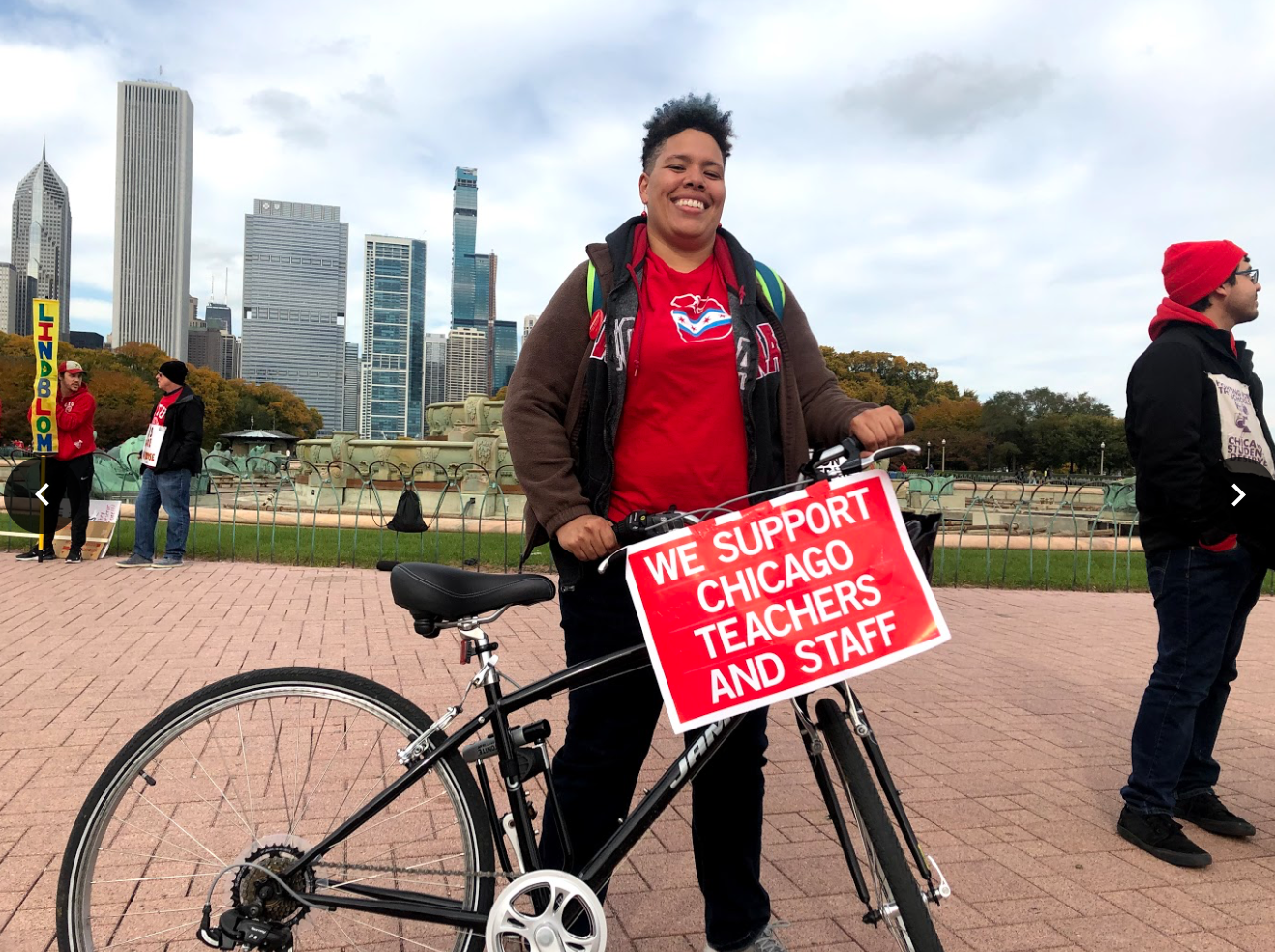 “I just really care for [my students] and I want to be back with them as soon as possible,” said Melissa Georgiou, a 4th and 5th grade teacher at South Shore Fine Arts Elementary School. “Our school doesn’t have a library, it was dismantled this past year. We had a library but no librarian, so it fell into disrepair. And we only have a nurse once a week.”

“I know for the long term, I need to be out here protesting, but in the short term, I really miss them,” she said. 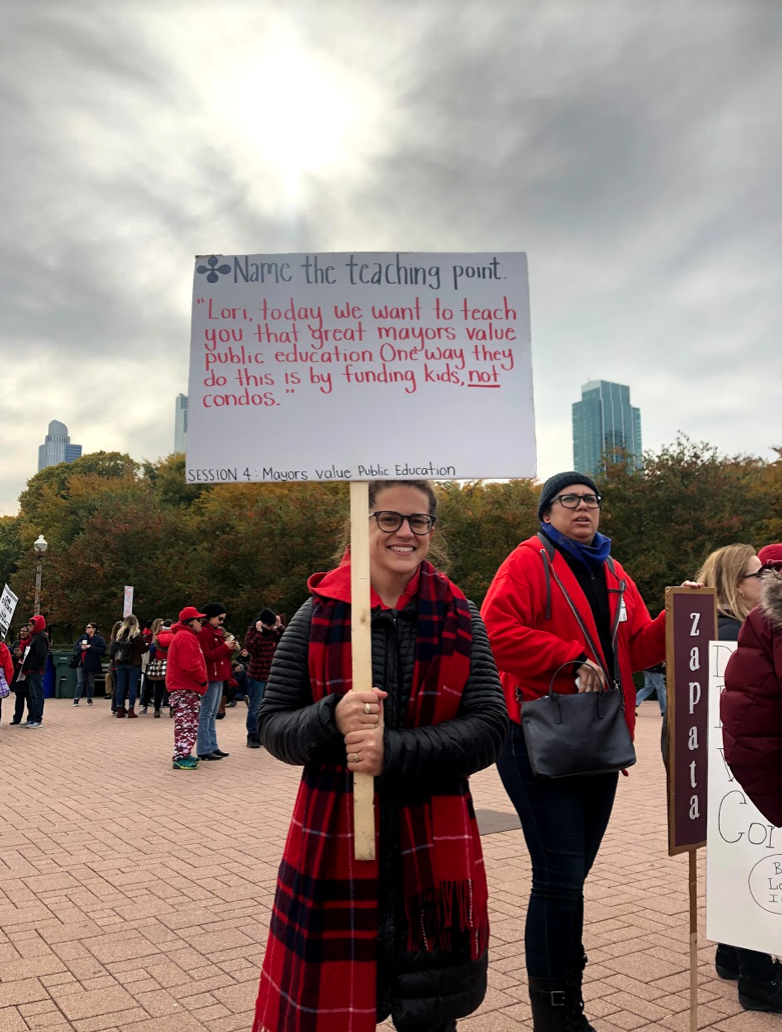 “I want them to know that we’re fighting what’s best for them,” said Mary Kleiman, a 2nd grade teacher at Zapata Academy in Little Village, with tears in her eyes. “Smaller class, so they can get the attention they deserve, social workers, so they can have people to help them with anything they’re going through emotionally, nurses, for they’re not feeling well. All the things they need to become the best people they can be.” 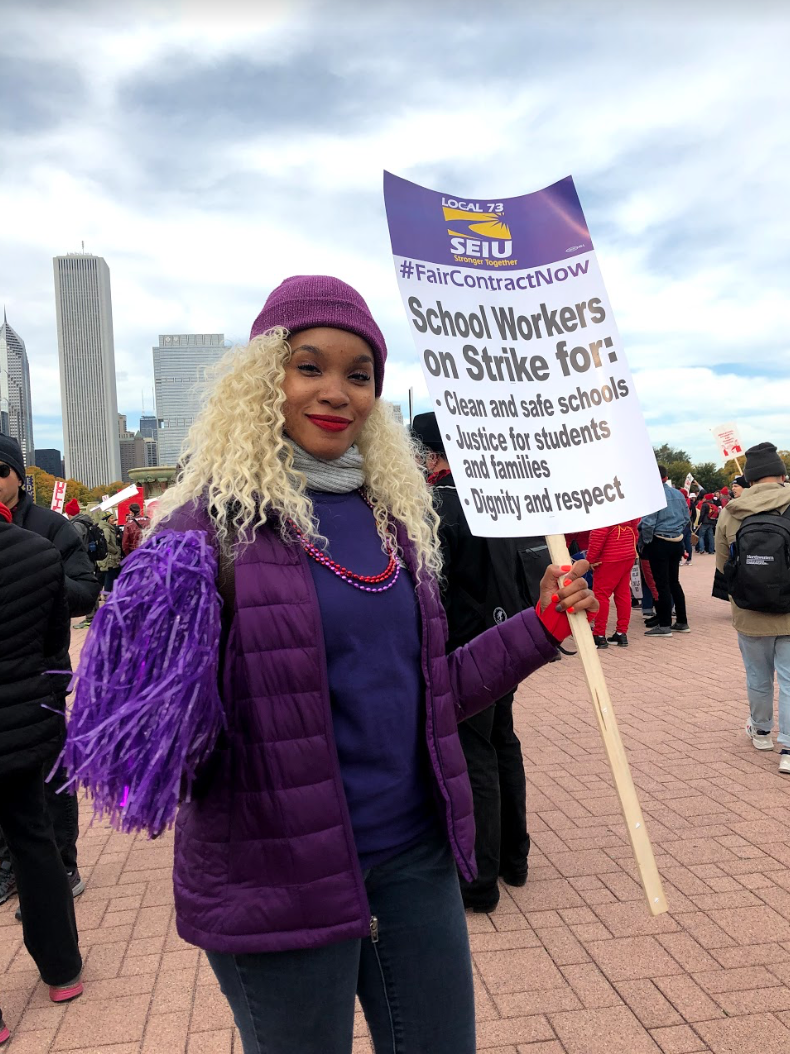 “I’m here because we haven’t had a contract in over 17 months, I’m fighting for a raise and better schools for all the students,” said Shavona McGregor, a bus aid and SEIU member. “I feel like the mayor and the city don’t care about public schools, so I’m here fighting to show them that they are important. Public schools matter. We all matter.” 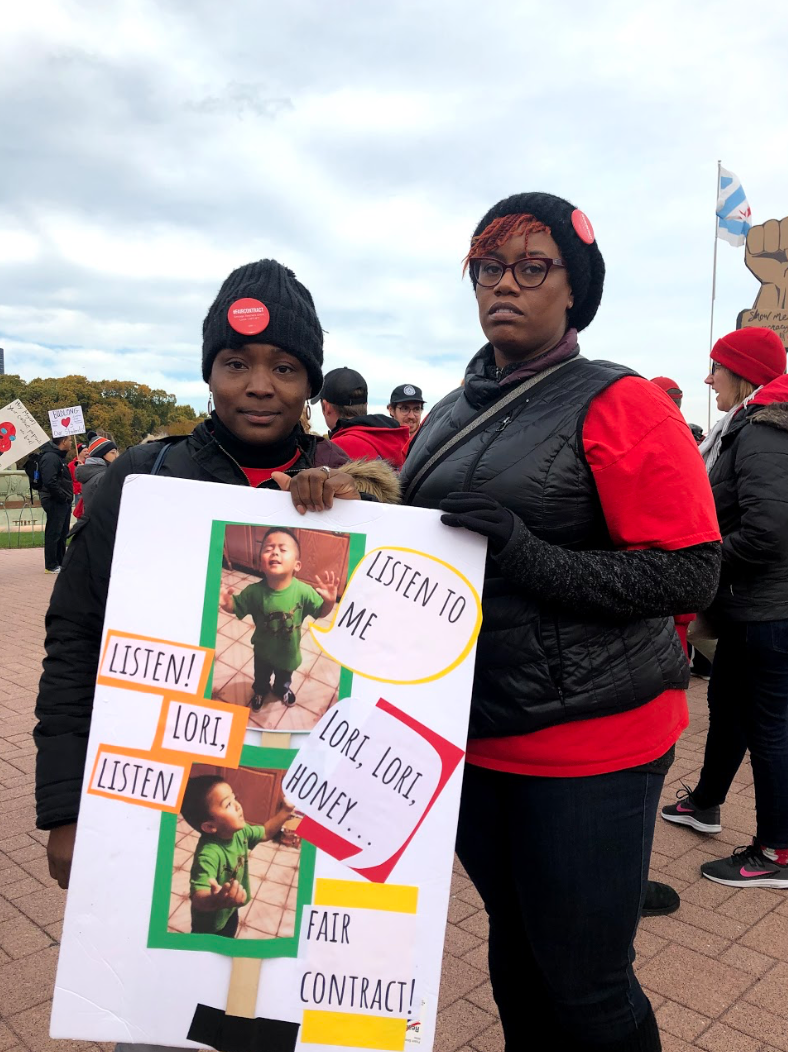 For Tarsia Rhyne, a kindergarten teacher at South Shore Fine Arts Academy, staffing is the main reason she is striking, specifically the lack of staffing around nurses and counselors.

“If you’re their teacher, do you really think they’re going to want to come to you and talk to you about something that’s personal?” said Rhyne. “Now they know you’re on another level, they don’t feel like they can share everything with you that they need to share. So that’s why I really hope that we get the staffing that we need.”