The call for DePaul University to end its partnership with the Fraternal Order of Police (FOP) continues as the university refuses to meet the demands of some students and employees.

Two weeks ago, 14 East reported on University Center for Writing-based Learning (UCWbL) employees who staged an online walk-out in protest of the university’s partnership with the FOP through cohort programs.

The demands to terminate the partnership in question are coupled with national demands to defund the police. Cities such a Minneapolis have gone as far as its city council declaring its intent to disband its police force. On a local level, students from other universities in Chicago are calling for the disbandment of their own police forces.

After the virtual walkout, which went from May 30 to 31 and gained them a meeting with Provost Salma Ghanem, the UCWbL employees were optimistic about the meeting’s outcomes.

“We were in pretty high spirits that someone was going to listen to us, communicate with us and cooperate,” said peer tutor and Head Writing Center Tutor Patricia Haney. 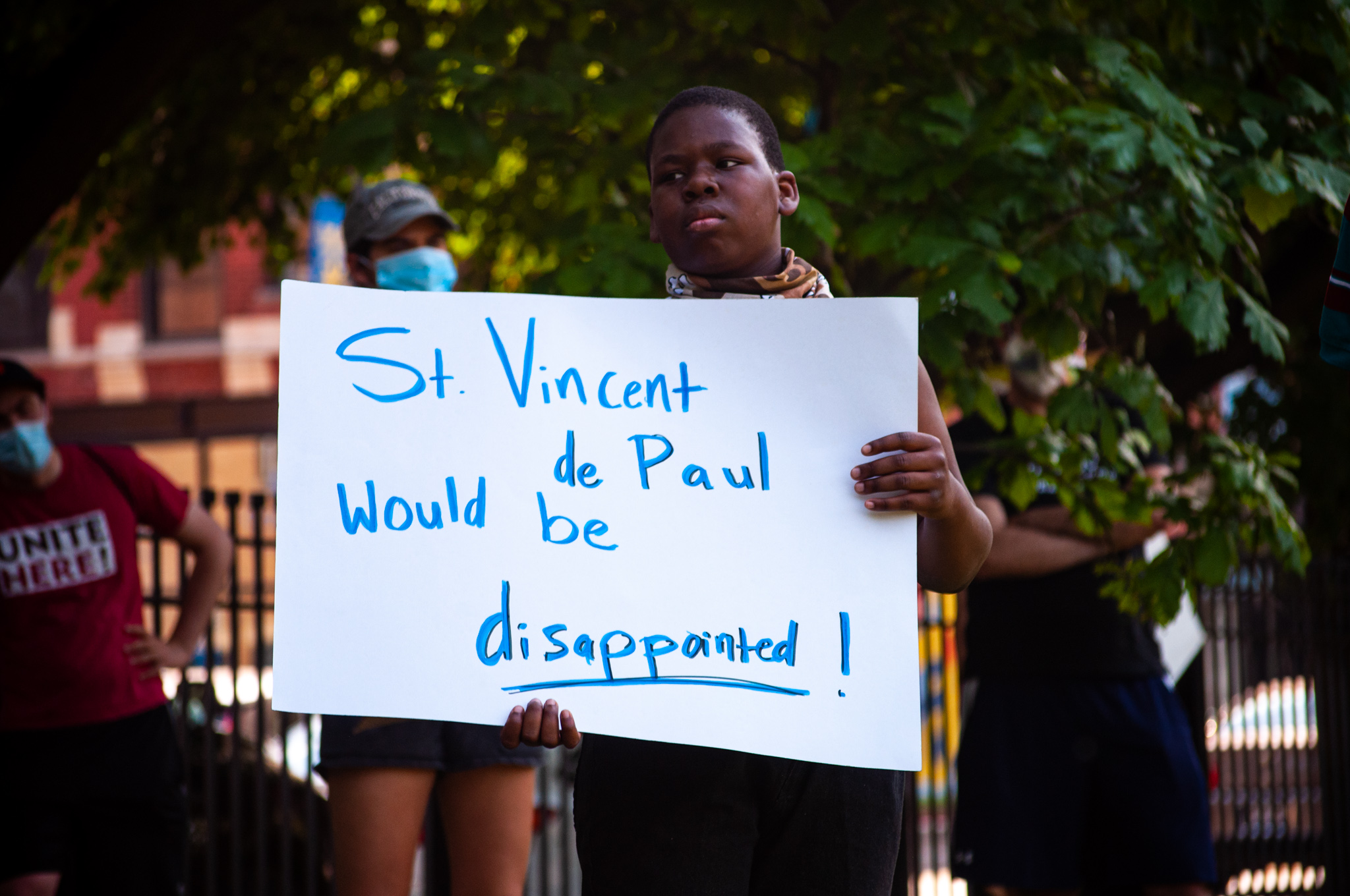 A protestor holds up a sign that reads “St. Vincent de Paul would be disappointed” at a protest for Chartwells employees on June 19. Grace Del Vecchio, 14 East

Since the meeting with the provost was one of the demands of the walkout, the employees were happy it was met.

During the meeting, the UCWbL employees requested that the provost, in collaboration with the writing center, draft a statement denouncing the actions of the FOP, or “some sort of censure,” said Haney.

During the meeting, Haney said Ghanem did not voice any objection to releasing such a statement. However, when Haney and her writing center colleagues sent a draft of the statement, Ghanem declined to be a part of it, stating that she could not give privilege to the writing center, as other student members of the cohort program, including the DePaul Chapter of the National Lawyers Guild, are coming to her with similar demands.

However, in a statement to 14 East, the lawyers guild chapter stated, “Interim Provost Salma Ghanam justified this relationship, stating, ‘Our university is dedicated to providing students an education that is imbued with Vincentian values of social justice and transforming society to serve the most vulnerable. We are called to provide access to high-quality education to all.’ We agree that high-quality education should be available to all. Unfortunately, this partnership accomplishes the opposite.”

In a general response to the student and employee demands via the DePaul Newsline on June 22, the provost included an email from an unnamed Latina CPD officer who takes part in the cohort program.

The officer wrote of her sadness at the students’ protests and expressed a desire that “students get to know our stories and our side.”

The email did not in any way deter the efforts of peer writing tutor Aneesah Shealey, who created the petition to end DePaul’s FOP ties. “When I read that I was like, you know, it sucks that this woman feels so ostracized,” she said. “But George Floyd isn’t here anymore, Breonna Taylor isn’t here anymore. You know, I’m sure they would love to weigh in on police brutality, and on over-policing in Black communities, but they’re just simply not here.”

Going forward, the writing center employees plan to amplify the demands of DePaul students and employees and support other efforts to end the partnership between DePaul and the FOP.

Student activists plan to hold a protest on Saturday, June 27, on the DePaul Quad. This comes amid a series of protests regarding the university’s relationship with the FOP. Saturday’s protest specifically calls for DePaul to terminate its relationship with the FOP, end its School Resources Officer (SRO) program that puts law enforcement officers in schools, and reallocate funds from the Criminology B.A. program and put them towards supporting Black students.

This is a developing story, check back for updates.