With the upcoming election, it is important to understand the hoops and bounds some voters have to jump through in certain states.

While it might sound obvious that everyone should have the right to vote in an election, that doesn’t necessarily mean that everyone across the country has the same access to vote. Whether it’s Voter ID laws that some say are discriminatory, or just having the ability to mail in a ballot, every state handles the election their own way.

Under the 10th Amendment, individual states are responsible for holding elections. While this rule was originally put in place to ensure the federal government did not have too much power, it does not hold the federal government accountable to ensure every person in the U.S. has the same access to the vote. Currently, 35 states have laws that require voters to show ID to cast their ballot, a law which does not exist in Illinois. 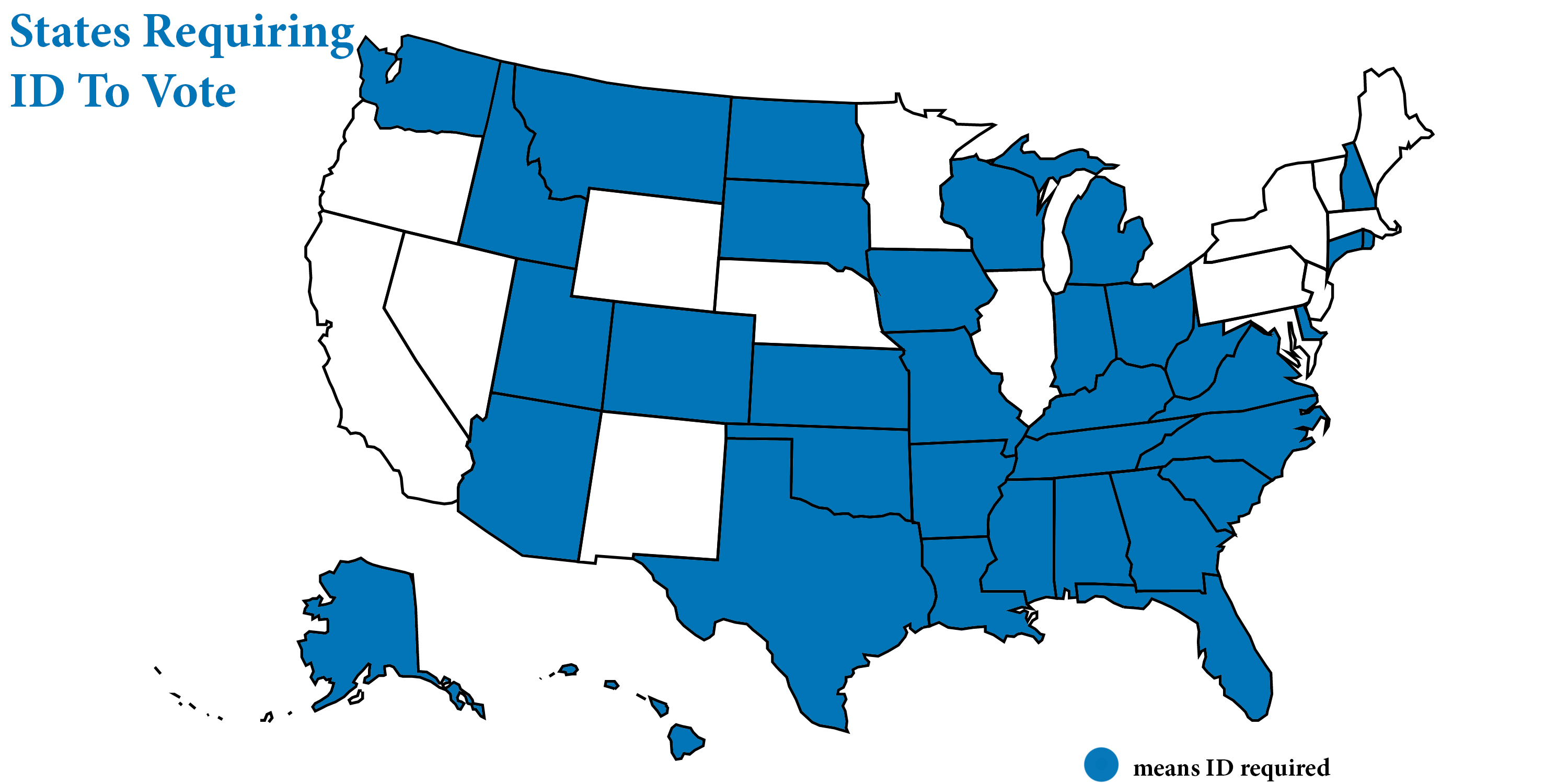 Map made by Yusra Shah. Data courtesy of the NCSL.

Prioritization of voter equity varies by state. Maine, Vermont and Washington D.C. are the only places in the country where a person may never lose their right to vote, but it gets tricky with the remaining 48 states. Illinois is one of 16 states where the only people not allowed to vote are those incarcerated under felony charges. If that same person with a felony was still under probation in Texas and 19 other states in the country, they would have to wait for the probation to end to regain their right to vote.

Civil rights organizations such as the ACLU define voter suppression like having poll taxes and literacy tests in the Jim Crow South, and while those tactics are no longer allowed with the Voting Rights Act in place, marginalized voters are still being suppressed. It is important to understand what amendments have been put into place to make the access to voting more equitable, what legislation is being pushed now and what voter suppression looks like today.

The 15th Amendment gave Black men the right to vote and the 19th Amendment gave it to  women. Poll taxes, a tactic used in the Jim Crow South that taxed people who wanted to vote, were struck down by the 24th Amendment. Today, the Voting Rights Act of 1965 provides us with some of the guidelines on how we hold elections.

In 2013, a provision commonly known as Section 5 of the Voting Rights Act, designed to prevent voter discrimination primarily in the former Confederate South, was removed by the Supreme Court. The provision was set in nine states with histories of suppressing historically marginalized Black communities and stated that any changes made for the election process were to be reviewed by the Department of Justice. With the provision gone and the Department of Justice not reviewing the changes in the election process, new restrictions on voting came up in those states. 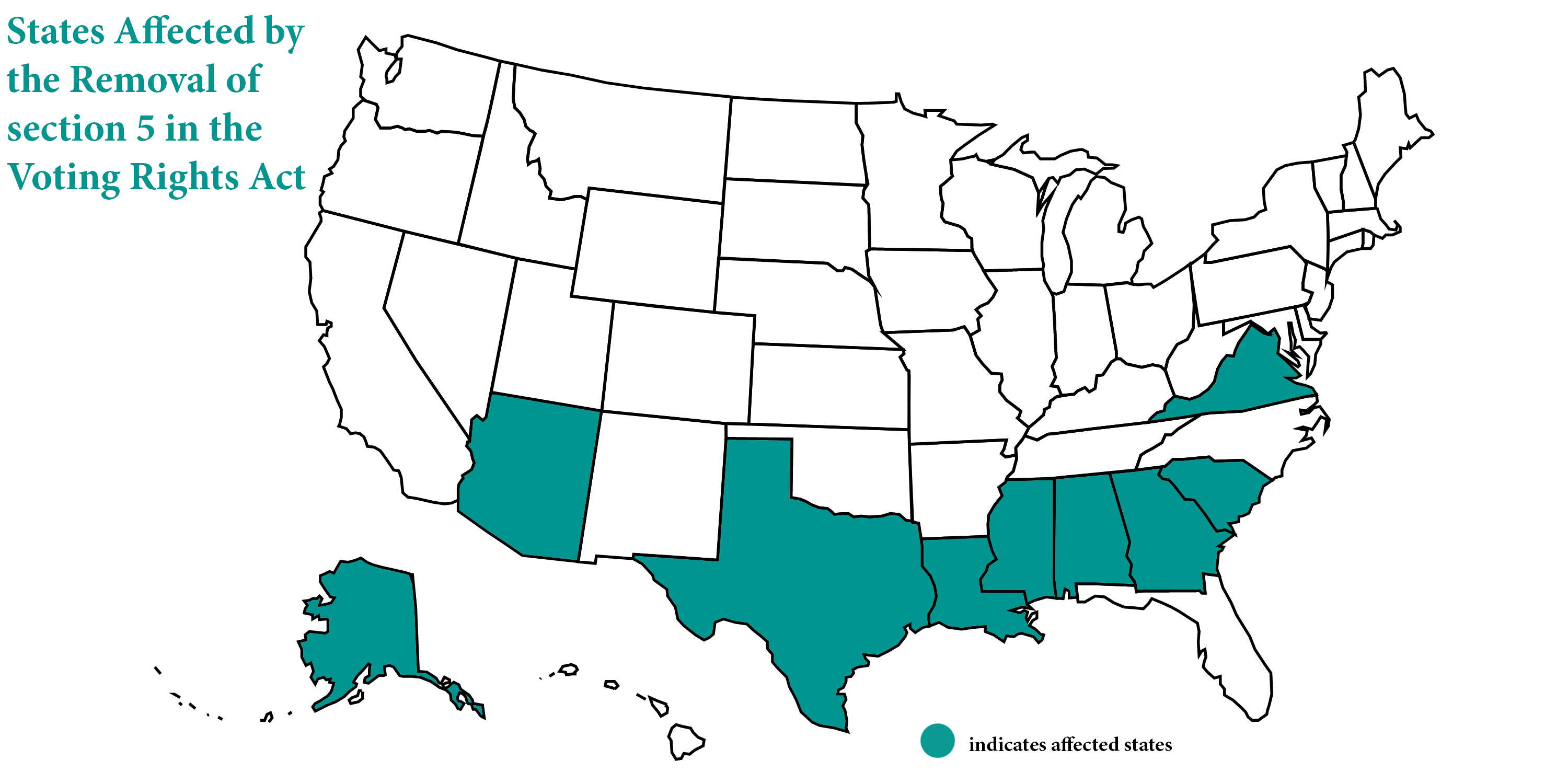 Map made by Yusra Shah. Data courtesy of The New York Times.

According to DePaul University political science professor Christina Rivers, representatives have been working to reinstate Section 5 into the Voting Rights Act since 2014 to strengthen the right to vote from the 15th Amendment. Rivers said it would need to be backed in the Senate and the House and would need a two-thirds backing in each chamber so that it could override a potential presidential veto. Another approach they could take, she said, is to write a new amendment, which would need to survive a veto again if the president did not pass it and to be approved by every state to be instituted. Given there is not enough backing in Congress, either would be an uphill battle, said Rivers.

“Individual states can pass legislation that is similar to what was in the Voting Rights Act,” said Rivers. “States can pass laws designed to eliminate suppression or at least place heavy sanctions on it … some states are doing that and others aren’t. The federal government is hesitant to force states to do those types of things.”

Rivers also said that in-person voter fraud is “a problem that virtually does not exist,” which can sound contradictory when over 30 states have voter ID laws.

“People just don’t do that. It’s difficult to do that in this day and age. It takes a lot of effort. It’s a felony,” Rivers said.

From 2000 to 2014, researcher Justin Levitt from Loyola Law School in Los Angeles found there were only 31 credible cases of in-person voter fraud, a tiny percentage of ballots cast. Millions of people participated in those elections and there were more states with voter ID laws than actual cases of fraud.

One case of voter suppression that brought a lot of attention this month was when Texas governor Greg Abbott declared that due to concerns of mail-in ballot fraud that all counties across Texas would only have one place to drop in a mail-in-ballot.

This move was met with litigation from civil rights groups like the Campaign Legal Center and the League of United Latin American Citizens who considered this practice to be voter suppression. They made the point that large counties like Harris County, with a population of 4.7 million, needed to have more than one drop-off location for mail-in ballots. Before Governor Abbott’s decision to have only one drop off box per county, Harris county had 12 satellite drop off boxes.

Getting a mail-in ballot is not easy in Texas. Requirements need to be met which include that the voter be over 65, be sick or disabled, be out of the county in which they reside or be incarcerated. For reference, in Illinois any voter can request a mail-in-ballot with no restrictions or requirements.

Texas is far from being the only state that has news on voter suppression. Virginia had a voter registration crash on the day of the registration deadline and activists had to sue to win for the registration to be extended. Alabama also made news by declaring that “curbside voting” or voting by car was not allowed for the elderly. The list can go on and on from news stories that have broken this month, but what this shows is that clearly not every vote can be equal if federal action is not taken to make sure every vote can be counted, no matter the state.