Hundreds of prayer mats and worshippers lined the parking lot of the Republic Bank on Devon Avenue under a sky of colorful flags for the Rohingya Culture Center’s Eid al-Fitr celebration.

Thursday morning marked not only the end of Ramadan but the Rohingya Culture Center’s inaugural public Eid al-Fitr celebration. COVID-19 measures mandated the celebration, normally held inside the Center’s headquarters on Devon Avenue in the West Rogers Park neighborhood, to relocate outside to accommodate the 200 worshippers present. 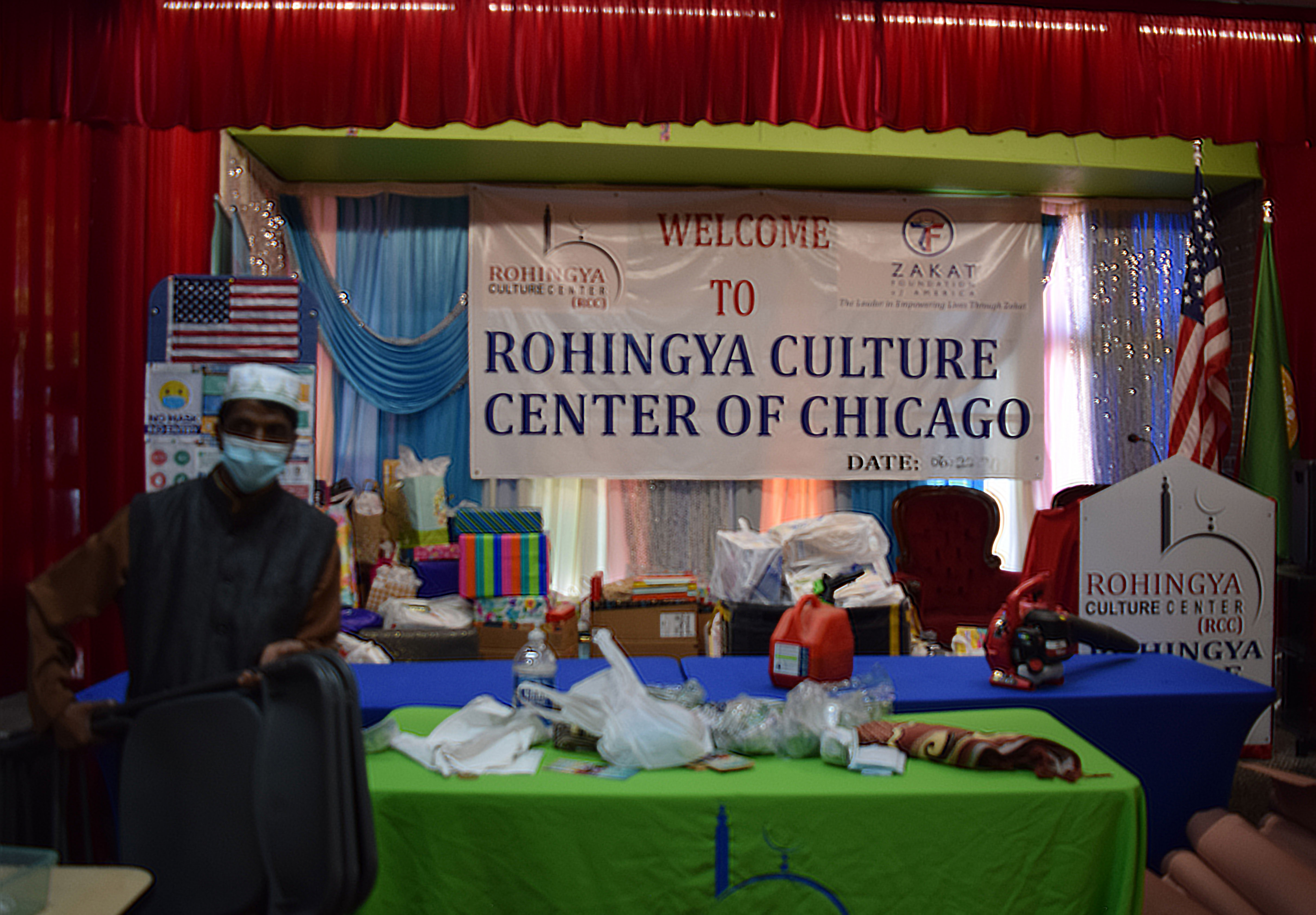 Members of the Rohingya Culture Center meet at their hall on Devon Avenue after Eid al-Fitr celebrations May 12. Traditional Eid celebrations are held inside the hall, but to allow for social distancing and increased attendance, the RCC hosted its Eid ceremony in a parking lot down the block for over 200 worshippers in attendance. (Photo by Maureen Dunne)

Chicago is home to one of the largest communities of Rohingya refugees in the U.S. According to the Rohingya Culture Center’s website, over 1,000 refugees have resettled in the West Ridge Area in the past 11 years. For many members of Chicago’s Rohingya community, this year’s Eid al-Fitr size and presence outdoors was poignant.

“Our freedom is restricted back home but we do whatever we can,” said Imran Mohammed, a Rohingya advocate, writer and member of the RCC.

“But here, you’re not afraid and you’re not scared. We have the legal papers to do it. It’s a huge thing for us.”

Like many in Chicago’s Rohingya community, Mohammed arrived in Chicago as a refugee in 2018 and has been involved with the RCC ever since. He now attends Truman College and assists with the RCC’s youth and community engagement surrounding English and education. 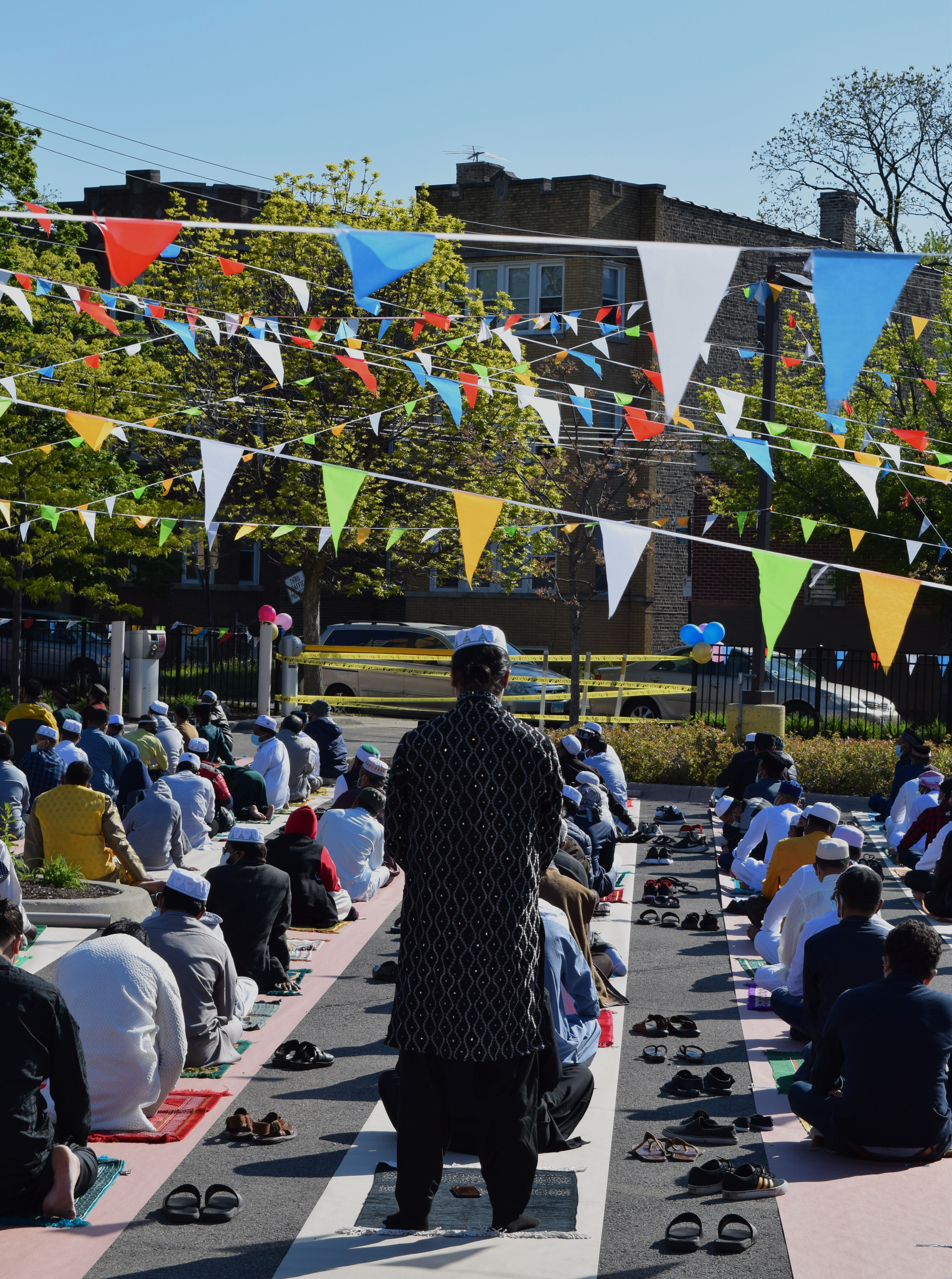 As both an ethnic and religious minority in their homeland of Myanmar, the Rohingya people have faced severe, codifed discrimination for decades. The Myanmar government’s attempted genocide has been ongoing since 2016, and hundreds of thousands of refugees have fled into camps in neighboring countries and resettled around the world.

Having been stripped of Myanmar citizenship in 1982, the Rohingya people are considered stateless and thus unable to benefit from public services within their home country. Most refugees arrive in the U.S. having been barred from receiving an education and their native language has no written component.

“Our community is very vulnerable in this country, because of the lack of language. It will take them a long time to improve their English because our language is not [written],” Mohammed said. “So they cannot learn this new language, because they don’t have anything else to depend on.”

Many in the community lost their jobs at the onset of COVID-19. The center stayed open throughout the shutdown to offer assistance with English translation and remote schoolwork to those in the community.

“The case managers have been here every day even before there was the vaccine,” said Sarah Panjeau, program manager at the RCC. “They’ve been putting their lives at risk so they can help the community. We can’t shut down.”

Nasir Zakaria, one of the first Rohingya refugees to resettle in Chicago, founded the RCC in 2016 to accommodate the needs of the growing Rohingya refugee community. For years it has managed cases and offered English lessons, tutoring for students, Quran classes and religious education, and it even hosts a children’s soccer team. 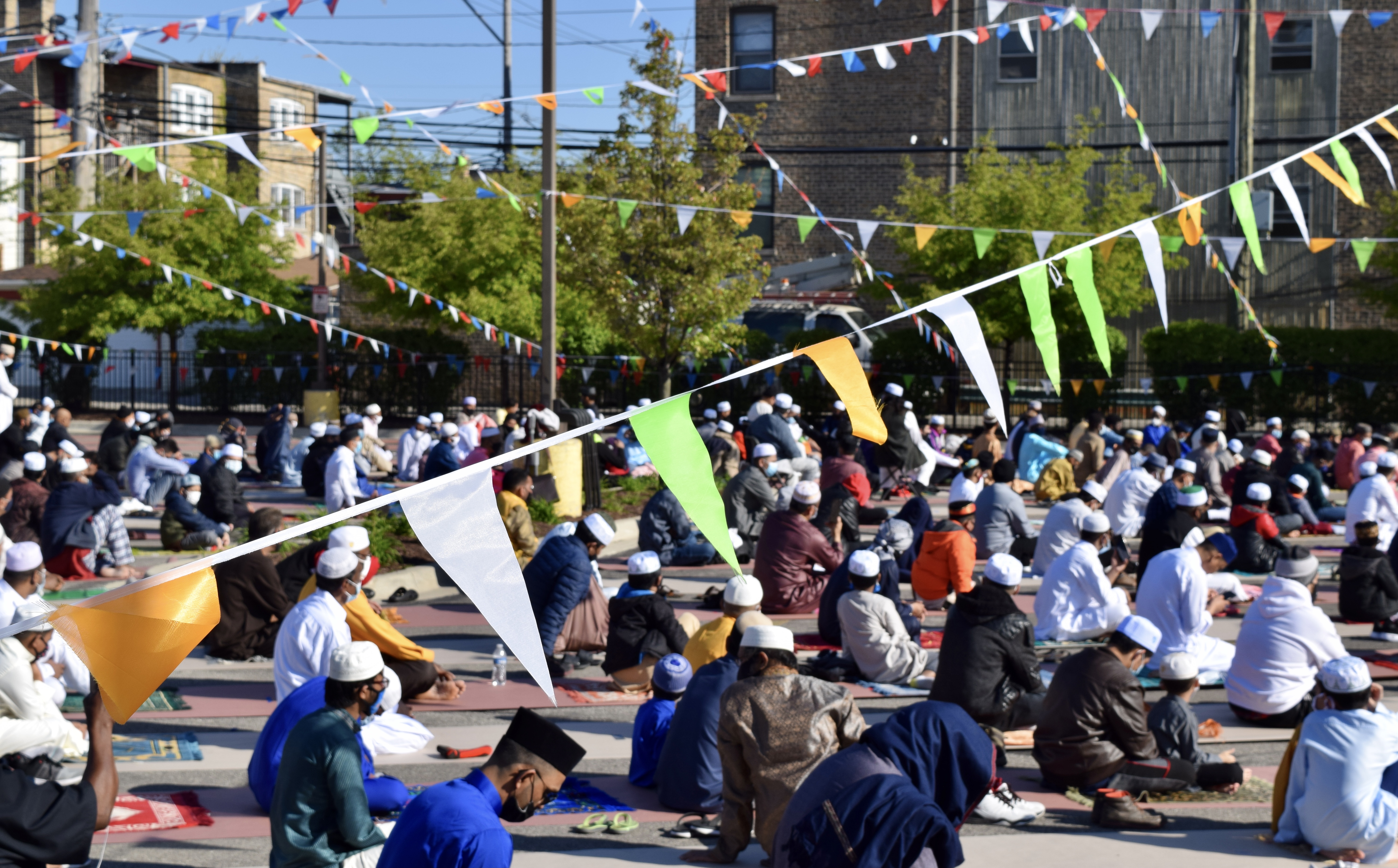 Down the block from celebrations in the bank parking lot, RCC’s hall is covered in posters, photos and articles detailing the persecution and genocide of the Rohingya people. Almost everyone has family left in Myanmar or refugee camps all over the world — it is a wound that never heals.

Many worshippers live-streamed the service on Facebook, inviting friends and family abroad into the joy of celebrating Eid.

Slightly southwest of the RCC stands the vibrant community of Albany Park, emerging from the holy month of Ramadan with the Muslim Community Center at its core.

Though shuttered for most of the pandemic, the MCC hasn’t slowed on providing community services by distributing zakat — obligatory donations Muslims make to those in need — and delivering food to families in need. It’s also offered its parking lots, buildings and its congregation as community vaccination volunteers and sites. Kamran Hussain, president of the Muslim Community Center, boasts of a robust volunteer community which made it all happen.

“In the last month or so we’ve administered about 2,000 vaccines, not just at our mosque, but volunteers from our mosque went to a couple other mosques,” Hussain said. “So, we’ve tried to do our part in terms of making things better.”

The MCC in Albany Park, and its other locations in Morton Grove and Skokie, serves refugee and low-income communities. Without the nightly community iftars — community breaking of the fast after sunset at the mosque — that were held nightly during pre-pandemic Ramadans, the MCC has been delivering food directly to families and residents. Throughout this year’s Ramadan, Hussain estimates the program served 1,500 meals to refugee families in need.

Previous Ramadans at the MCC have had community togetherness at its core — something the pandemic has made impossible. A typical night would see three to four hundred worshippers in the mosque, but to accommodate social distancing indoors it has been limited to 150.

“[Before the pandemic] we used to have our breaking the fast at our mosque, where 150 to 200 people would come and eat a meal at sunset and then stay until the nightly prayers,” Hussein said.

In lieu of the traditional indoor crowds for this year’s Eid, the MCC posted a livestream to Facebook and hosted an outdoor service at its Morton Grove campus.