“I don’t even feel safe at lunchtime, three feet [of distancing] isn’t enough…and leaving school, it’s basically just a pile of kids and adults trying to leave and not even social distancing.”

On Monday evening, teachers, parents and students gathered at the Logan Square Monument to voice their frustrations over the COVID 19-related disarray that has plagued Chicago Public Schools since its reopening just over two weeks ago. In preparation to protest outside of Mayor Lori Lightfoot’s Logan Square residence, the group of about 50 sign-bearing activists demanded CPS leadership address an array of issues, including the lack of transparent communication in COVID-19 transmissions, enforcement of COVID-19 policies in classes and insufficient accommodation for remote learning.

Between August 29 and September 11, CPS reported 155 student and 90 adult COVID-19 cases related to CPS buildings. As of September 16, the number of close contacts identified from these cases was 5,473, and CPS expects all of those individuals to quarantine. Protesters, however, questioned the accuracy of the CPS reported data, considering frequent one-week lags on updates.

“Where’s the updated case data?” Nora Flanagan, a CPS teacher for 23 years and a mother of two CPS students, said at the protest. “Anybody? Anybody have the case data? Because that tracker is a week behind all the time.”

CPS publishes the report every Wednesday. The Chicago Teachers Union has created its own case reporting platform, where parents and staff can submit information about the health conditions at their school for anyone to see.

While the Illinois State Board of Education released district-level guidelines on the eligibility criteria for remote learning, many parents were angered that CPS left remote learning widely inaccessible. Indeed, remote learning is available, but only to students deemed “medically fragile,” according to CPS. As a result, parents are stuck between risking potentially life-threatening exposure to COVID-19 or risking their child’s academic career. 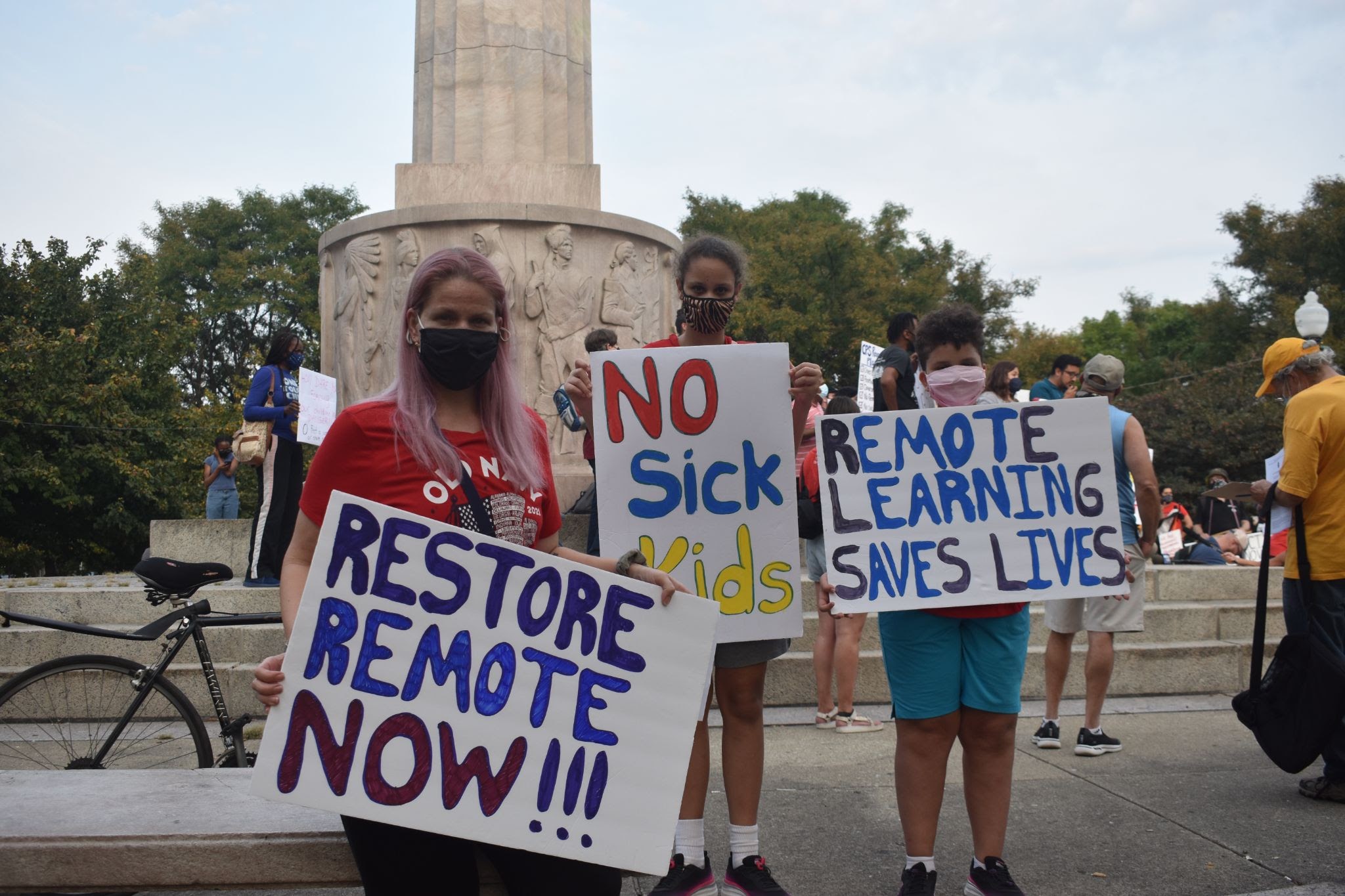 The choice wasn’t easy for Stacey Nichols, whose two children are enrolled at Sabin Magnet School but denied the medical fragility waiver. Nichols has chosen to educate her kids herself since schools opened.

Even some CPS students under age 12, who aren’t eligible for the vaccine, believe they shouldn’t be forced to learn in a risky, unsafe school environment.

“If I don’t do everything as a mother to keep my children safe, I will fail as a mother.”

“In most classes, kids will visibly just blow off the mask mandate, and they usually have it below their noses,” said 11-year-old Antonio Estrada, who was exposed to COVID-19 by a classmate on his first day, leading him, and over several other students under age 12, to quarantine for the first week of school. “I don’t even feel safe at lunchtime, three feet [of distance] isn’t enough…and leaving school, it’s basically just a pile of kids and adults trying to leave and not even social distancing.” Estrada’s mother, Maria Estrada, decided to take Antonio and her other child out of school and is determined to educate them herself.

“I really think that CPS, the administration and the Mayor have put parents and students in an impossible situation,” Maria Estrada said. “You think I want to pull him from school? Absolutely not, but I’ll be damned when my son gets infected. If I don’t do everything as a mother to keep my children safe, I will fail as a mother.”

For Cortney Ritsema, a concerned parent who was also left with little options for her children who attend Newfield Elementary, managing remote learning has been a logistical nightmare.

“For the first couple days, they were being marked as excused, so I still had access to their Google Classroom. They still have access to all of their CPS accounts, so I was actually in contact with their teachers and the teachers were giving me work for them. And the teachers weren’t telling me like, ‘this is what we’re doing in class’. Chicago Public Schools unenrolled them. I lost access to all of that, so right now, I am trying to figure it out.” 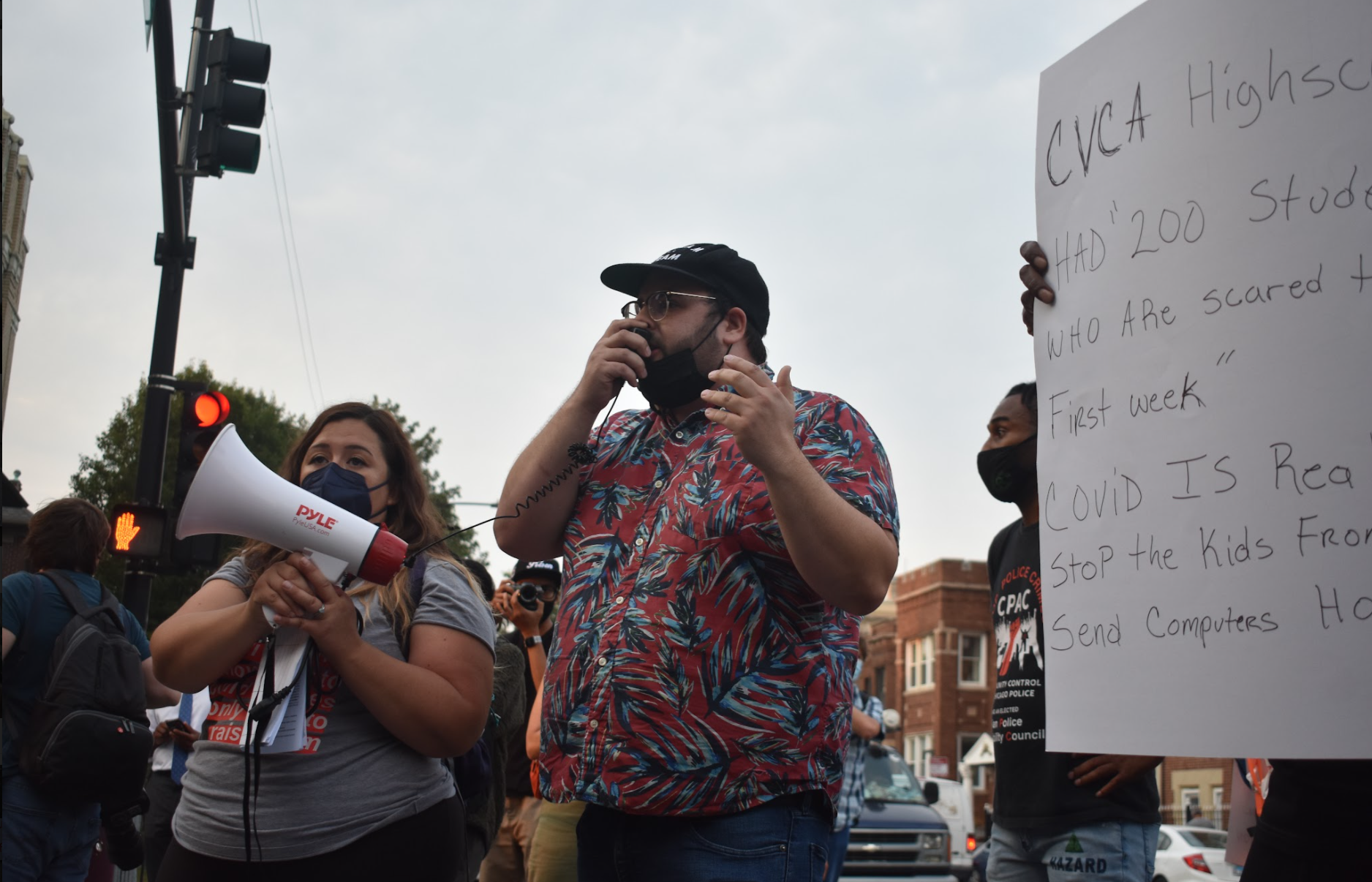 Many parents expressed little optimism when asked about CPS’s statement that 100 percent COVID-19 testing for students would begin on September 15.

“Yeah, we saw that [statement],” Ritsema said. “I don’t believe them. I don’t trust them. If they [CPS] can’t even be truthful about the number of cases and the number of outbreaks, then what else are they trying to hide?”

According to its report as of September 16, CPS has only administered 2,690 COVID-19 tests, with 431 (16%) of those cases positive, and 150 invalid. These numbers are expected to be updated as new data is reported.