“Be proud of who you are,” my mother told me one hot summer day when I was nine, her arm sweeping across the air in front of us. “This is our home. Never forget that.”

Moments before the doors open to the Van Buren Street Metra Station near Millennium Park around 8:00 a.m. every morning, the conductor with grey hair always lifts his right, gloved hand to flick the brightly colored switches on the train’s control panel. His body then turns to look at the blurring world outside the door windows, stating “have a nice day” when the doors finally open on the Van Buren platform and a gust of wind sweeps onto passenger’s faces.

With an occasional whistle here and there, the 6:45 a.m. Metra Electric train makes its journey from the 93rd Street South Chicago Station on the Southeast Side to the city’s bustling downtown. In the fifth row of the second train car, the seat on the right side with the power outlet is my favorite. I decided this one early October morning in 2018 after discovering that it is the sun’s desired placement to rest in the early morning hours.

The 93rd Street Station sits in a quiet neighborhood of houses with few owners, tucked far away in the deepest part of the Southeast Side. To an outsider, the first thing you will notice is Metals Scrap Inc., located directly across from the station — a large pit bull barking from the other side of the chain link fence at those passing by. You will observe how outer parts of the station are rusting from years of standing since its opening in 2001, both weathering Chicago storms and a lack of upkeep furthering the speed of it. If you look close enough, you might even spot a large crack that runs down one of the stationwalls, or one of the many abandoned bird and wasp nests that rest on the top metal beams of the station. 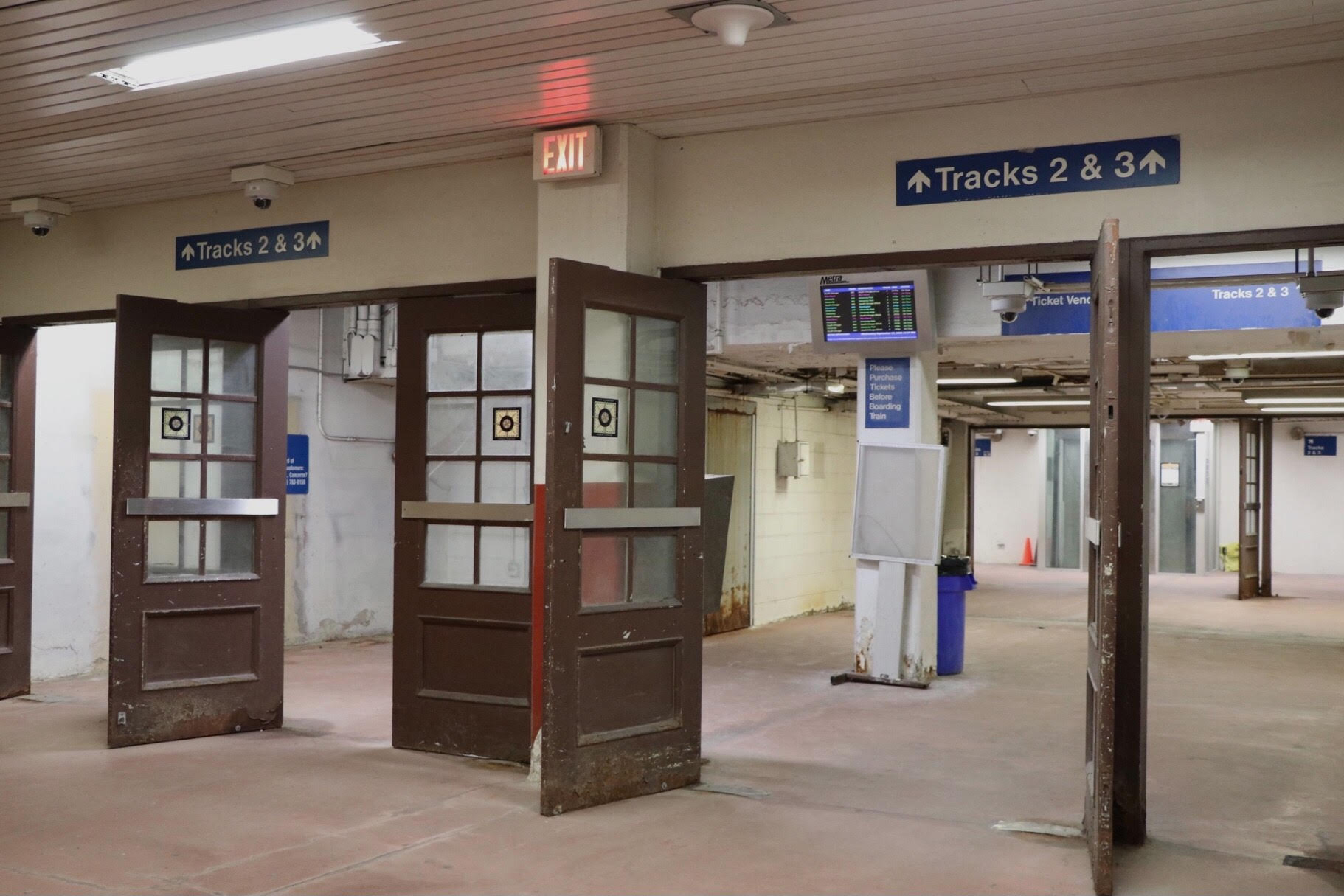 My vision of the 93rd Street Station, however, is different. I take notice of the man with a smile on his face who occasionally stands near the station selling hand-made pork and chicken tamales from his truck. I speak quietly in the morning hours to the two women outside of the station doors who bless me on my way to school. As I stand on the station platform, I spot the same mother and daughter duo walking up the stairs — an eager smile on the daughter’s face as she awaits for the train.

Rather than looking solely at the outside of the 93rd Street Station, I admire the people and their stories. To do this, I look at the train stop through a lens. After becoming a student on the North Side, I realized how many did not look closely at the details of the people who live here. When you pay close attention to a space, you will take note of how close a community is, how hardworking they are, how each person has a story of their own.

On my first Metra ride to college freshman year, I watched the world outside the window transition between my community working to make a living for themselves to the chatter of the busy downtown area near Van Buren. I had seen this transition many times in car rides to middle and high school, but the Metra allowed for a slower, more evident burn of the world’s blur between the two. 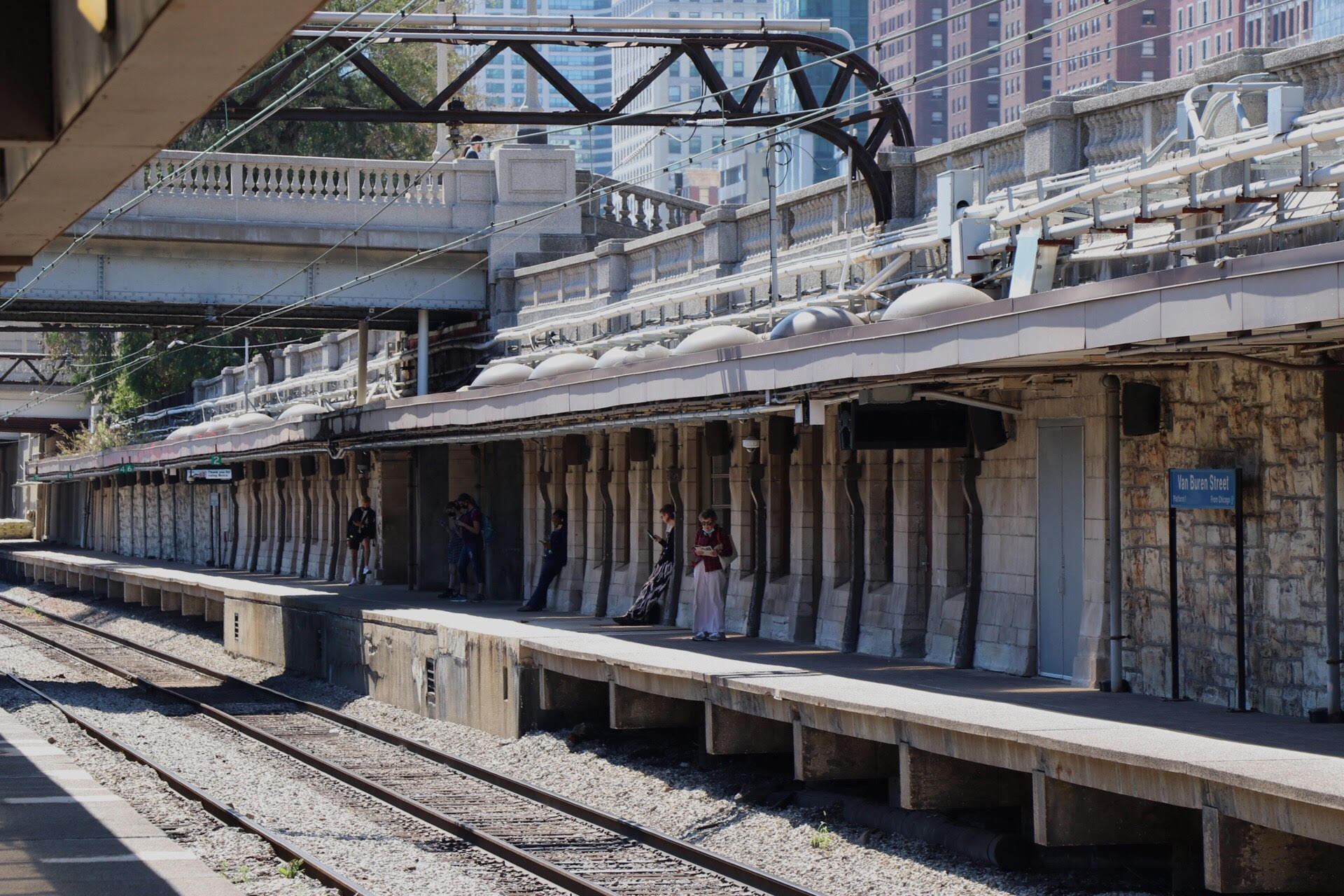 It is 7:55 a.m. on a breezy Tuesday morning freshman year when I sit in my usual spot — head pressed against the window with Billie Eilish’s famous song “idontwannabeyouanymore” on repeat. Millennium Park finally comes into sight after staring at Lake Shore Drive for a good amount of time. With winter nearing, the green leaves on the trees are now falling onto the ground.

“Next stop, Van Buren,” the conductor calls over the speaker as the train pulls into the heart of downtown, passengers shuffling in a hurry towards the doorway. Instead of getting up, my eyes focus intently on the conductor’s movements. He does his usual routine: hanging up the speaker and standing idle for a moment before his hands reach over to the train’s control panel.

For every train ride I had taken so far, not once did the conductor’s fingers hesitate in the motions of handling the different switches on the panel. It was obvious that his fingers worked through the complexities of the system many times, and I often wondered how it was possible to move quickly through a system that required so much thought to control and manage.

Perhaps my curiosity in figuring out this train system was a longing desire to understand the complexities of my own system. Growing up, I had been trapped in between my Mexican identity and the desire to fit in with the students of predominantly white schools on the North Side. The switches of my inner workings struggled to function when mentions of my Mexican traditions became a laughable matter, or when I was scrutinized for not being the “Mexican” that students expected me to be. It reached a point where the inner switches of my system began to flip so rapidly they burned, leaving me questioning who I really was.

“Be proud of who you are,” my mother told me one hot summer day when I was nine, her arm sweeping across the air in front of us. “This is our home. Never forget that.” 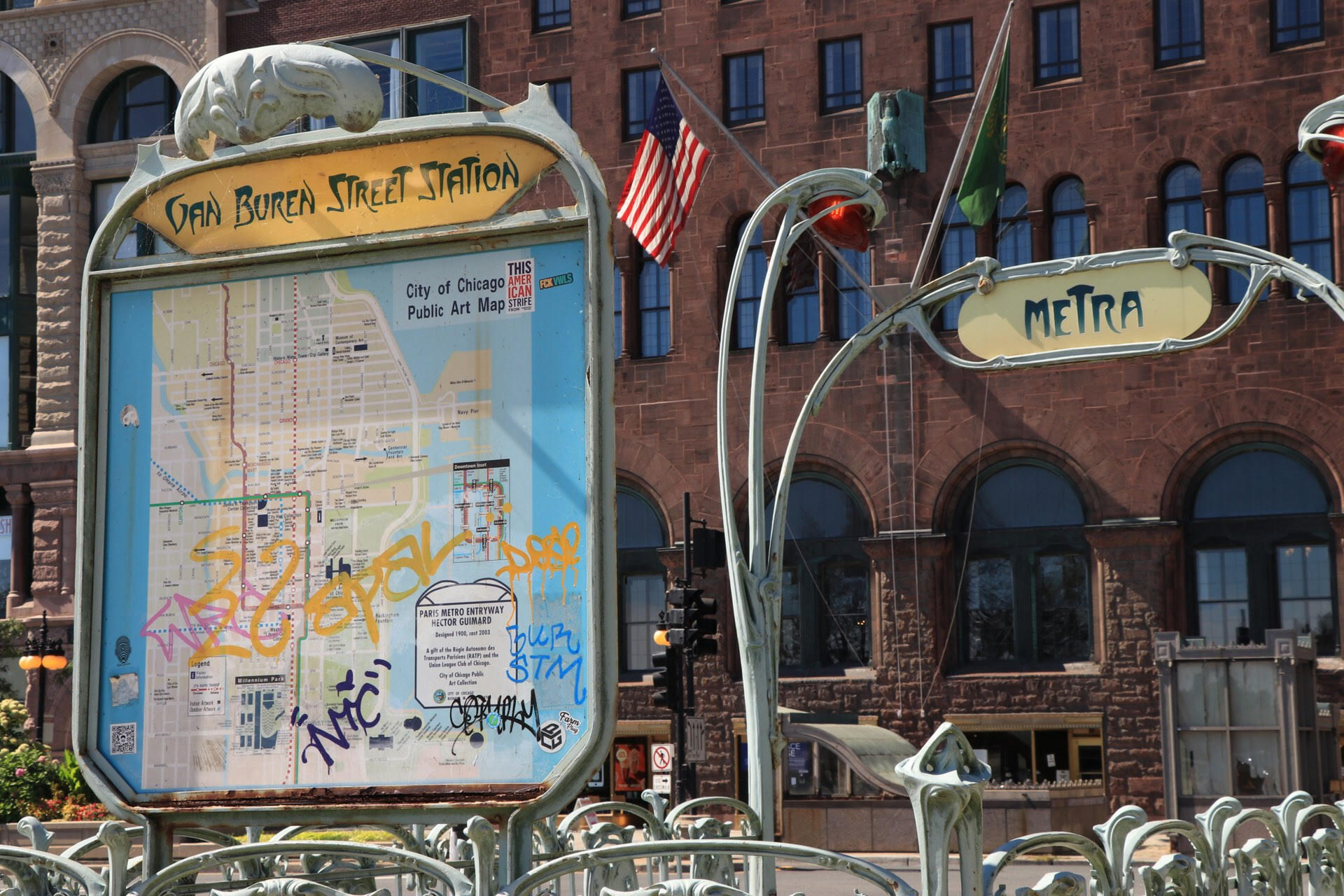 After living a hard life in Mexico, in the mid-1950s my grandparents immigrated to the Southeast Side in search of a better future for themselves and their children. Speaking very little English, they settled on work at Wisconsin and Republic Steel — two of the most integral steel mills in the region. They would cough at the dinner table from inhaling toxic chemicals and rub their burned hands from the pain of handling equipment. Eventually, after years of hard work at the mill, my grandmother developed pulmonary fibrosis from the toxic fumes and passed away.

My own parents, both born and raised on the Southeast Side, grew up poor. Despite not having much, they appreciated the homes they came from. At 17 and 18 years old, my parents worked in community service amongst Mexican youth in the neighborhood. My mother always believed it was important for children living in the community to love and appreciate where we lived as much as my parents did.

The Southeast Side is not just my home, but it’s my parents and grandparents’ home as well.

Before transferring to a middle school on the North Side of Chicago, the Southeast Side was all I knew. I did not know what the world was like beyond the small community I was raised in and immersed myself in. Upon entering this new world of the North Side, I quickly understood that adaptation to the environment was necessary to stay afloat. The pride of my community that my mother had taught me simmered once I realized how challenging it was to maintain.

As I watch the conductor handle the switches on the control panel, I am suddenly no longer sitting on the Metra Electric anymore. Instead of heading to school on a breezy Tuesday morning, I have been teleported back to my elementary school bathroom, hiding in a stall during recess. It is near the end of second grade, and I am crying for the third time that week. It was not uncommon for me to find peace in the bathroom when I was unable to find comfort elsewhere.

This new school was not home. It did not have the same warm effects as my school back on the Southeast Side. I longed, in that moment, for the familiar faces of my childhood friends to reach out and hug me. I cried because I would never be like the other girls surrounded by me in the halls. I cried because I did not want to be me.

It is one of the many moments in my time at that school where I was upset by my mistreatment. I recognized that the complexities of my inner system were never worked through, and the pain from the inability to fit in as a child carried over into my adulthood. I wish to go back and give that little girl comfort as she cried over her failed attempts to have friends.

When I look in the mirror today, I am tired. I am tired of a lifetime trying to figure out who I am and where I fit in.

My thoughts are interrupted by the swoosh of the Metra door as it opens on the Van Buren platform. I have made my way back from the bathroom I once cried in, to the reality of my world now. I step off the train and feel a rush of air hit me in the face. As I leave the train and enter a place that is not home, I know I am once again leaving a part of myself behind. 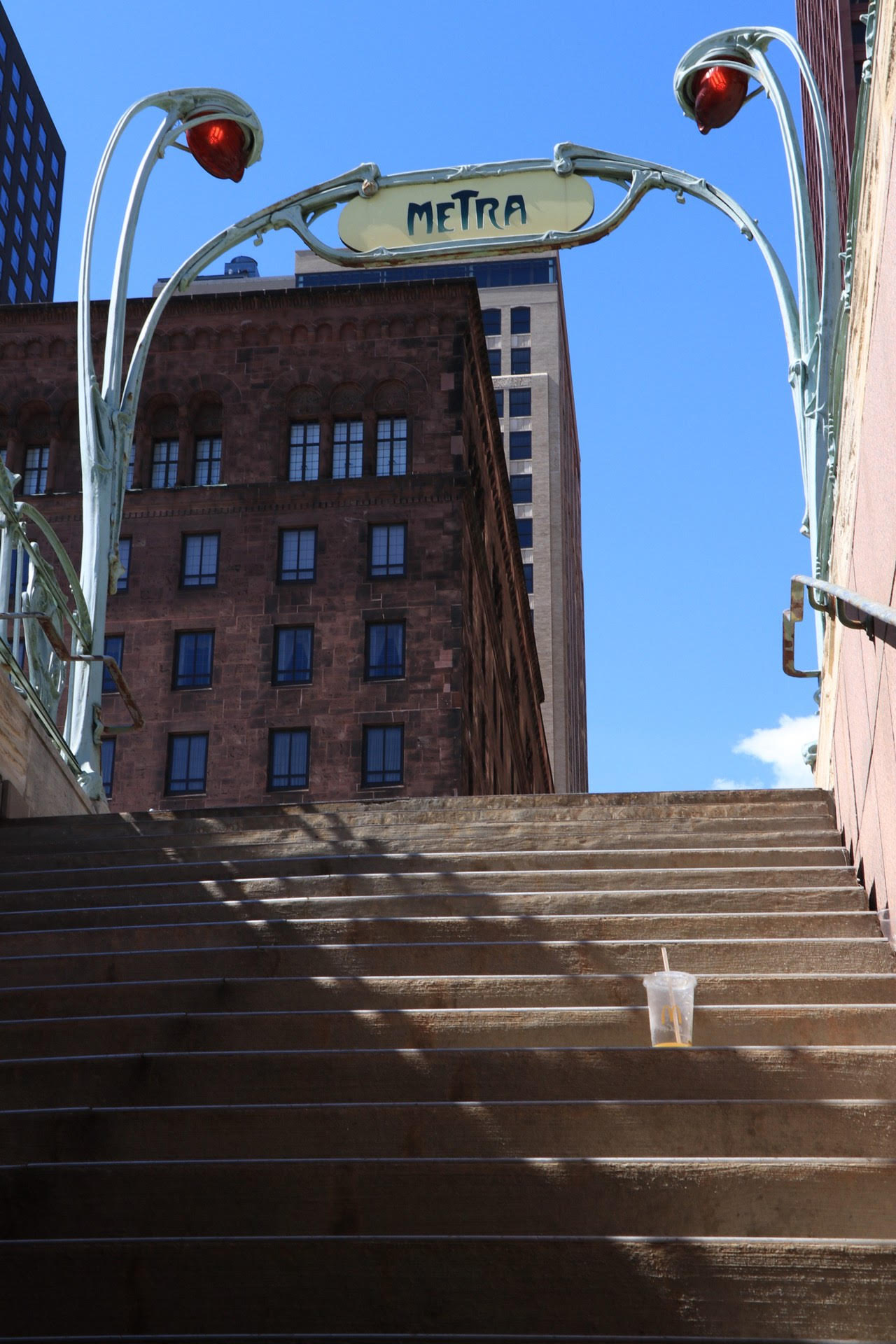 It’s still Tuesday, but the temperature has dropped significantly since I hopped on the train earlier in the day. With my classes and work finished for the day, it is 6:45 p.m. and I am ready to go home. As the Metra Electric rolls away from the Van Buren station, the bright morning sun that rested in my favorite spot of the second car is now a soft, golden tone. The sun’s golden rays lay over the city as the journey back home begins. The train is loud and crowded until, one by one, there are only a handful of passengers left.

My head presses against the window again, The Weeknd’s “As You Are” playing quietly in my ears. The sun has now set in the sky, but I can still spot the buildings downtown vanishing and shifting into the homes of my neighborhood.

“Next stop, 93rd Street Station,” the conductor calls over the speaker when the train nears the quietness of the Southeast Side, his gloved hand rapidly dancing on the control panel.

When the doors to the train finally open on the platform and I wish the conductor a goodnight, I notice how quiet it is in comparison to downtown. There is no loud yelling or shouting amongst the streets, just the soft hum of quiet chatter from other passengers heading to their destinations.

As I walk down the platform towards my father’s car waiting to pick me up, I turn towards my left. The man who stands near the corner of the station is packing up his items for the day. As he wipes the sweat from his brow and stands, we make eye contact. With a smile, he lifts his free hand up and waves. 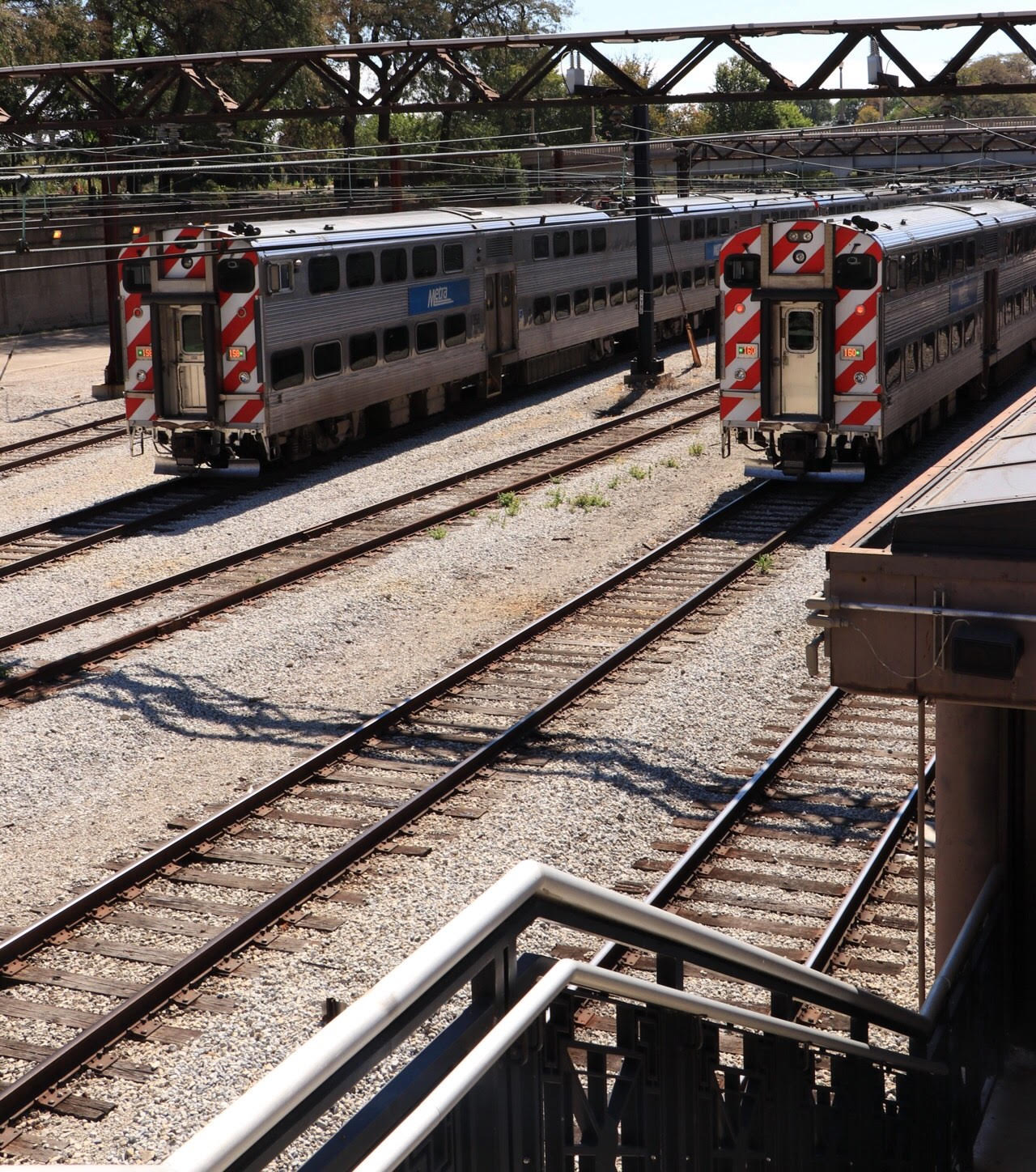