Chicago Printmakers Collaborative Builds a Community Out of Copper

“Political and social movements can be supported and propelled by these communities that form around printmaking.” Artists at the Chicago Printmakers Collaborative make artwork that is accessible, thought-provoking and powerful.

As Deborah Maris Lader, the director of the Chicago Printmakers Collaborative (CPC), dances her gloved fingers across her chosen copper plate, the preparation of etching the surface begins. What begins in the acid room for this golden slab is equally as important as the print pressed onto the thick paper.

“The acid resist that gets applied to the plate is called a hard ground, made from asphaltum mixed with solvent and wax. The plate is etched in a bath of ferric chloride,” said Lader. 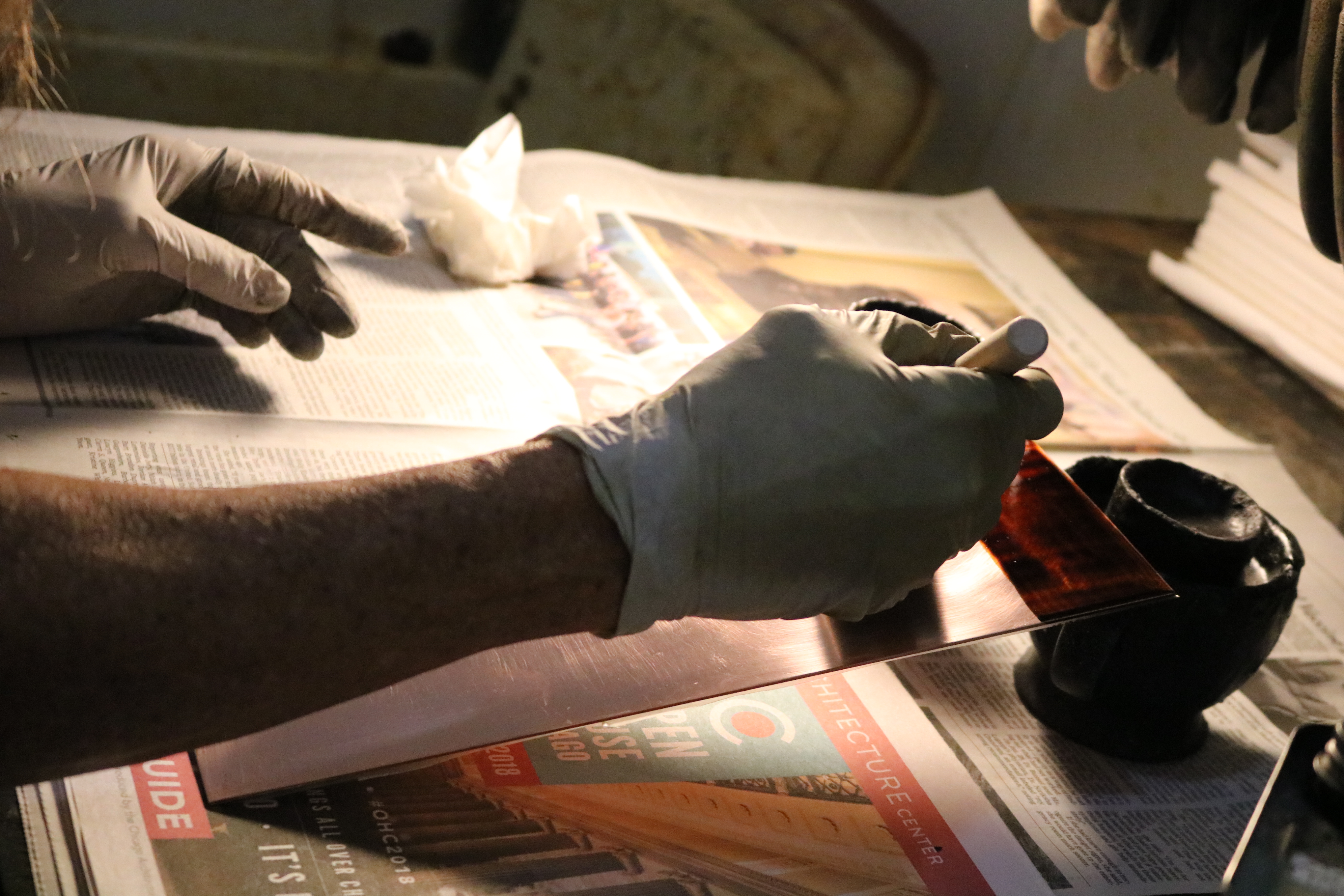 A process of this length and precision creates an emphasis on commitment. For Lader, the fact that you cannot simply discard a plate is enticing and integral to her work at the studio. During her time creating prints through intimate, physically arduous work, her beliefs and passions have naturally manifested in her art and the overall collaborative.

The beginnings of this operation are easily defined by years and locations. The collaborative began in 1989 in a second-story walk-in in Chicago’s Wicker Park neighborhood. Her primary way of collecting wood and other objects for the shop was with a van, visiting demolition sites. From 1999 to 2006, CPC resided in a shop on Western Avenue, only a few blocks down from their current location in Lincoln Square. 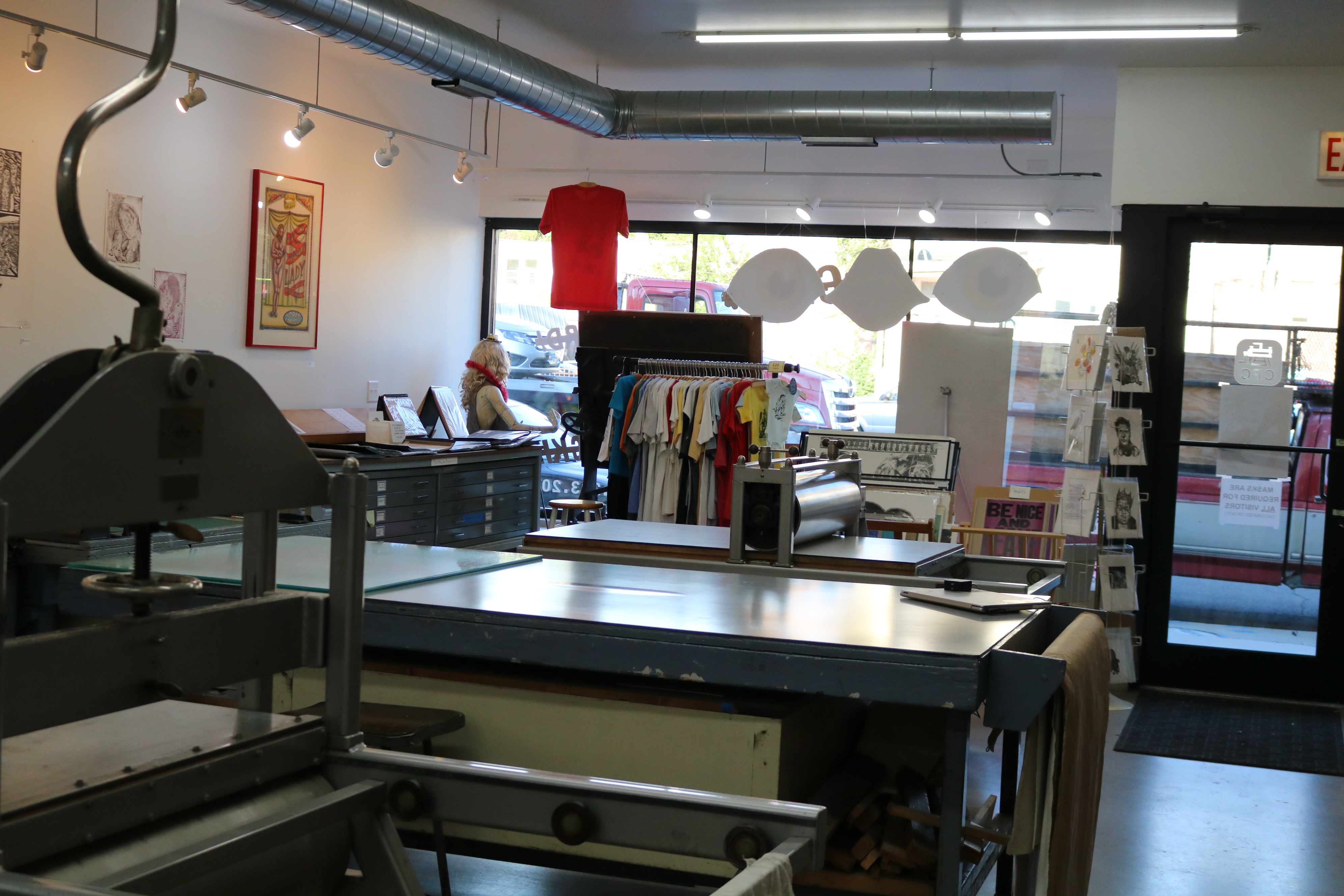 Lader taught at Indiana University for a year before moving to Chicago. As the head of the printmaking department, she taught all levels of printmaking and 2D design. After moving to Chicago with her husband, she intended to continue her art practice through this way of simultaneously teaching and creating art. However, Lader encountered an obstacle with the lack of print shops in the city. From here, she decided to create her own solution. “I saw this ad for an old shop for sale and I bought it and started the shop thinking, well I’ll just have my own university and call it a day,” said Lader.

Her art-making began in her childhood with clay sculpture. This draw to working with old mediums remains integral to the work she creates today. Lader notes that she used to primarily sculpt. This past of manipulating various materials is utilized greatly at CPC; however, printmaking adds her beloved element of illustration. “When I discovered printmaking, I literally just never looked back. It was so right for me,” she said.

This concept of changing materials is not limited to print. “I’m always thinking in layers. This is similar to music,” said Lader in reference to her artistic process.

Creating scratches with her band, Sons of the Never Wrong, is integral in creating the final product. “The process of making music, especially in a recording studio or something like that, is so similar to printmaking. You lay down your bass guitar tracks first, generally, then you lay down your vocals, maybe, and then you lay down something else and there might be something that we call a scratch,” said Lader. 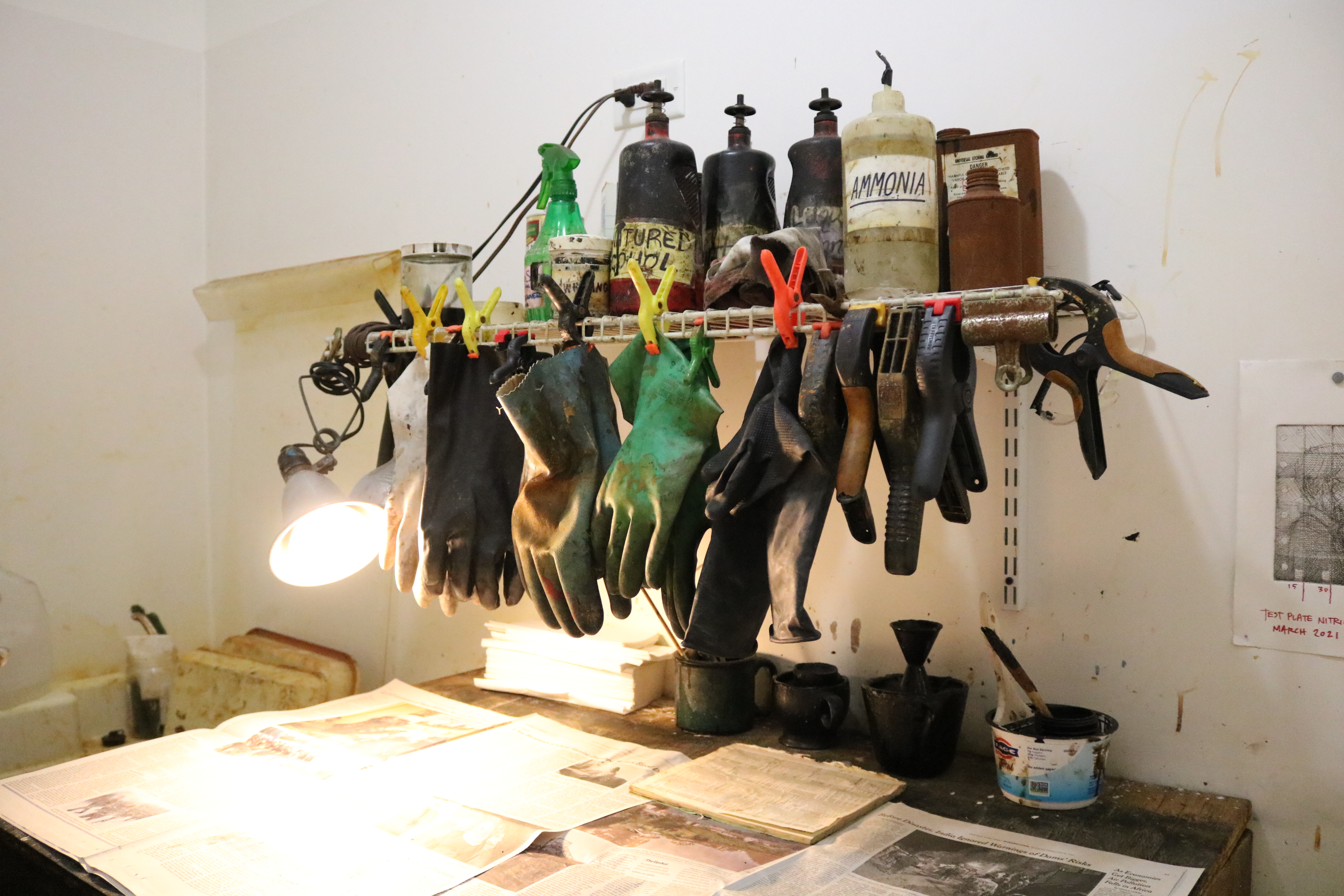 While she does not make art for the purpose of selling, Lader enjoys the accessibility that is added to her practice through reprinting and working with steps of her prints. This is emphasized by her ability to manipulate different layers to make multiples or variations of one piece of print. Harnessing this is not only interesting and creatively freeing, but can allow patrons to afford her art.

The importance of this was highlighted during an exhibit where CPC partnered with a print shop in Tehran. CPC had art shown all over Iran and in the space occupied by CPC. “The multiples were really nice to have because the people in Iran took those multiples and toured the show all over the place,” said Lader. 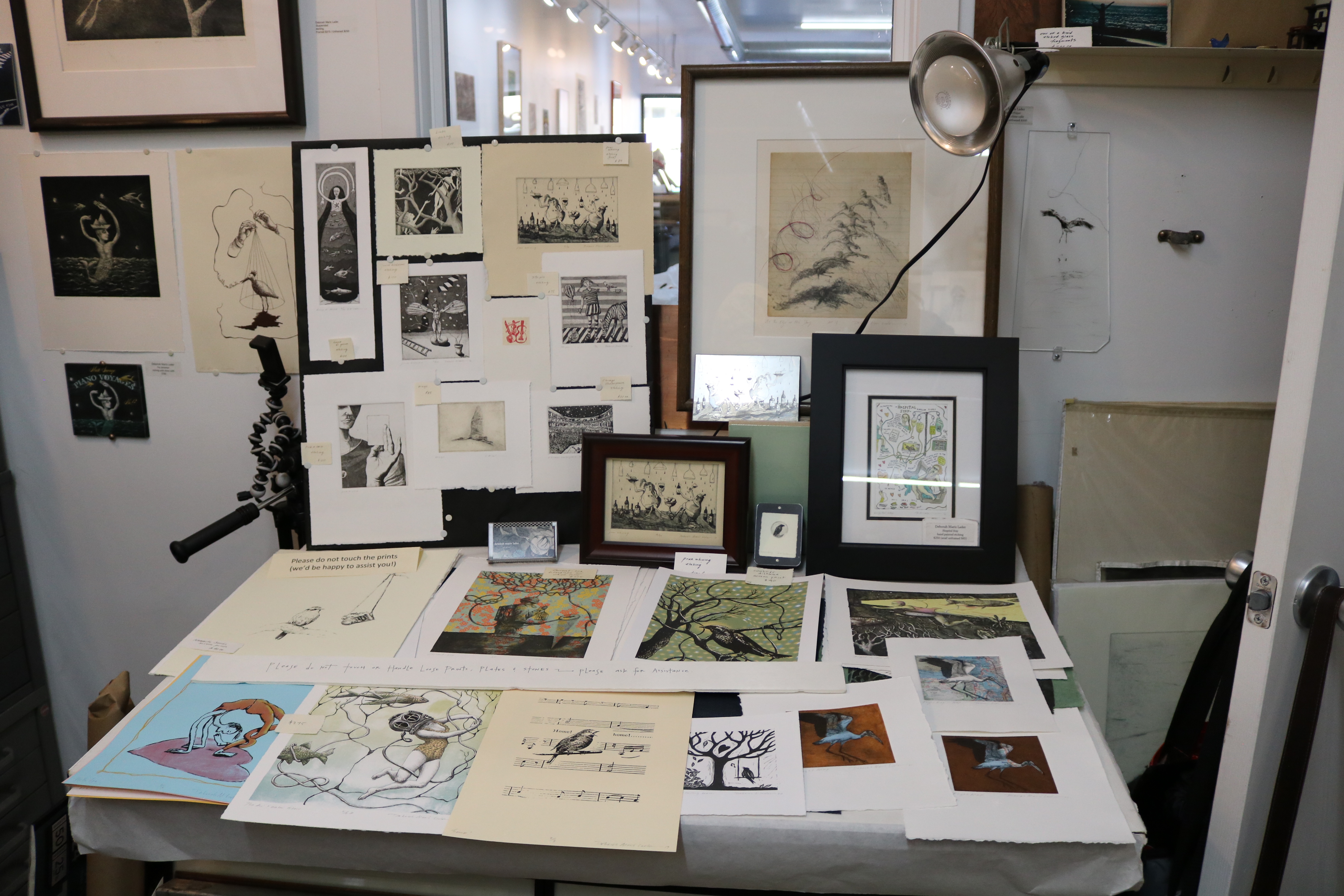 For one of Lader’s prints, being labeled as too risque in a foreign shop made popularity rise. “They ended up putting it in an office and people would have to ask to see it. I think this was in Kermanshah. I sold out of it [the multiples of the print]. People, they wanted it, I think because it was banned,” said Lader in reference to a small print of three women amongst tree branches, called “Limbs,” she had sent to a smaller venue for an exhibit.

Often it is noted that print production and other tactile art forms may lack efficiency. Notably, newspaper publications have, at large, suffered at the expense of the internet being a universal tool for certain populations. Within this, individuals also utilize social media to quickly share news, artwork, and general awareness.

“The truth is that digital forms of art, or at least digital documentation of art, are going to be able to be spread to the most people the most quickly. If someone’s main goal is to spread a specific message about politics, there are probably more efficient ways of doing that than making an etching. At the same time, all art, printmaking included, has social and political implications whether the artist is aware of it or not,” said Catherine Winings, a former studio assistant at CPC. 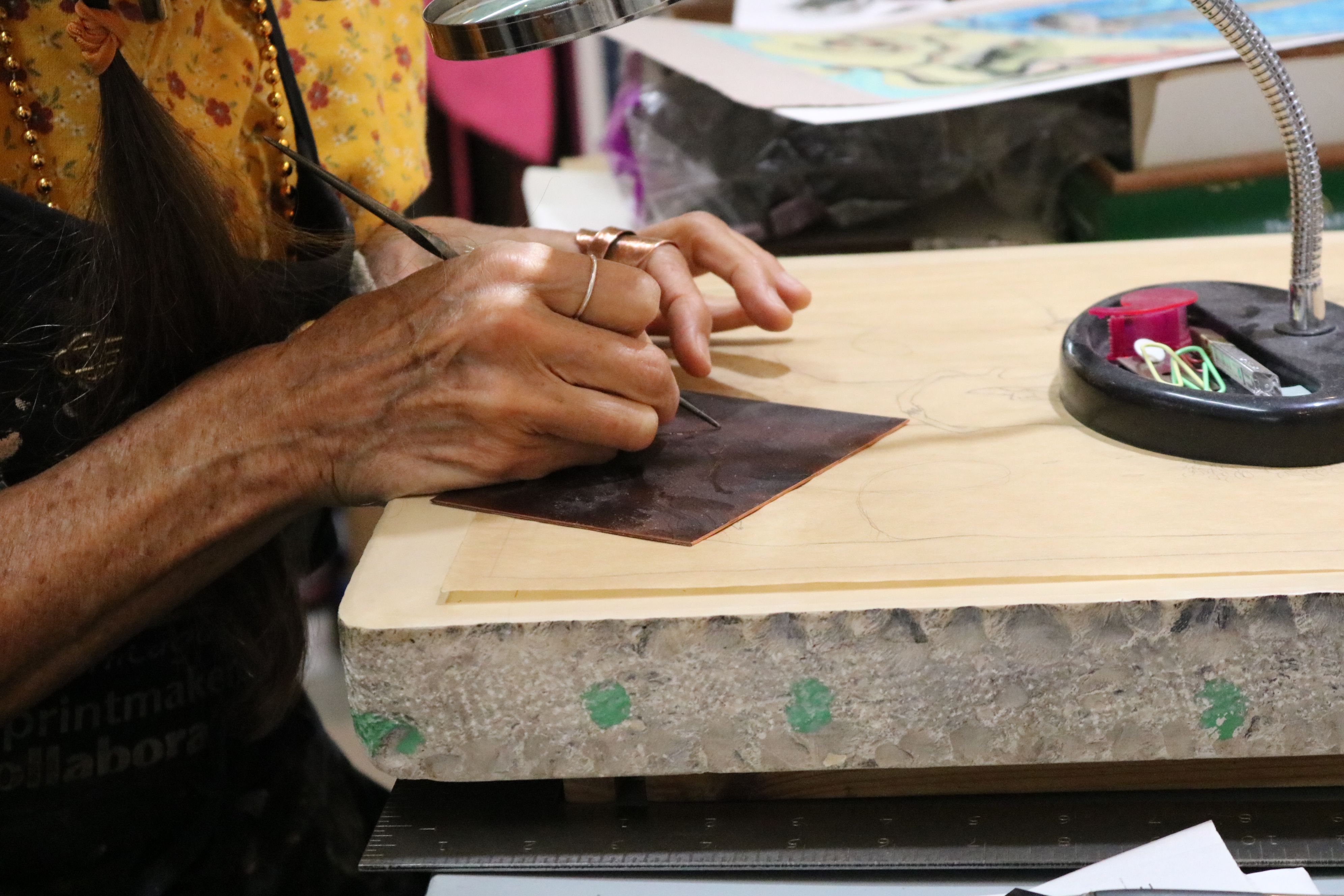 As a woman of many trades, Lader utilizes her social media platforms for free marketing, timeliness and connection. In 2016, when Donald Trump was elected president of the United States, Lader decided to exhibit art at CPC from outside the U.S. This was in response to the nationalist message that Trump preached. Acquiring this art and being in touch with a variety of printmakers was, to Lader, possible because of her online global reach.

While working with Print Organize Protest (POP), an international network of independent artists, Lader put out anonymous work in the summer of 2020 in support of the Black Lives Matter movement. She taped the posters to her storefront and put them online, free for download, along with the work of other printmakers. She intended to give these posters away for optimal accessibility.

“I loved that broadening of that community and that we as printmakers have that ability to not just make one painting or one printed find, but we can make multiple of those kinds of things that can get disseminated quickly and easily. That’s always been a part of my practice through the years, and that’s one example,” Lader said, in reference to the outreach with POP and her activism in print. One of her goals moving into her current studio six years ago was to expose international work to everyone in Chicago.

While internet resources continue to be prevalent, they play the role of amplifying printmaking rather than replacing it. “It [the act of tactile printmaking] is a unique approach that can’t be replaced even though printmaking is no longer particularly efficient as a means of production. Because of the need for specific equipment and skills in printmaking, it brings people together to share a press, take classes or lend and borrow equipment. Political and social movements can be supported and propelled by these communities that form around printmaking,” said Winings, regarding the value of print within social and political awareness. 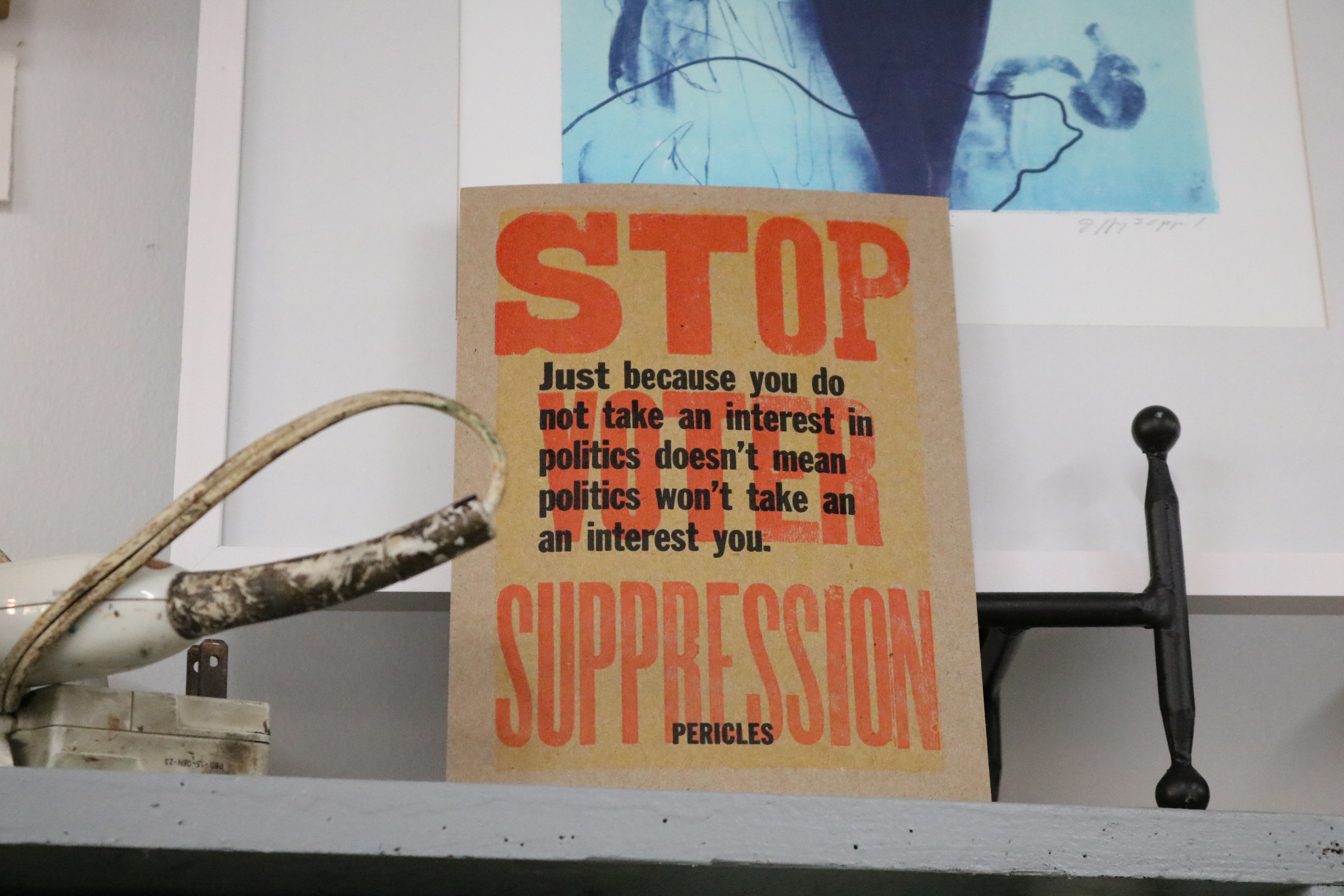 Carl Voss, the current studio assistant at CPC, utilizes several mediums in their art. They emphasize that while specific mediums hold unique properties, what is utilized is never truly divorced from one another. This relates to a sense of putting your entire body into the making of an image, and the pieces of print naturally accumulating into a communal vessel.

“Printmaking has long been regarded as a political medium, and printmakers partake in that history all the time, CPC especially. Be it the ease of dissemination and the greater accessibility, or the necessity of communal equipment and the exchange of knowledge; a print shop like CPC inherently partakes in those older histories,” said Voss.

Voss goes on to express these themes within a universal relevance. “I think it’s important for people to know that all things are political, not just printmaking. And it’s important for artists (and just everybody) of all mediums to understand themselves and their work in political proximity to one another and accept the responsibilities discovered in that understanding.”

As Lader personally created what is her current space, and life, she was questioning “how do you live a creative life?” She found cohesiveness in this intent. As an artist, she is using her hands to create something out of nothing. As Lader says, “when you create a community, you have to start somewhere and you just build.” 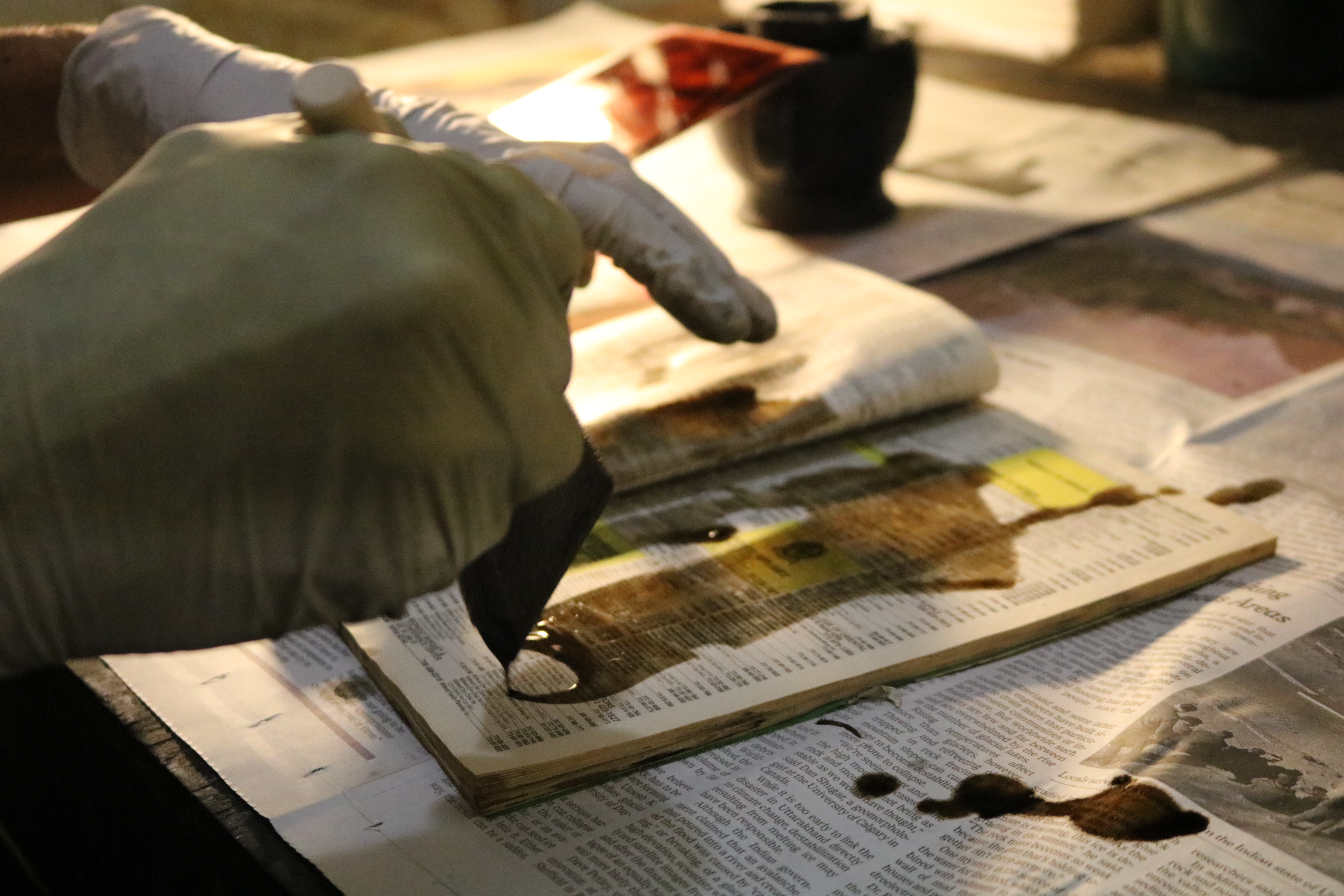 The current show being put on by CPC is called Tongue In Cheek and it runs until November 6, 2021. Upcoming is the 32nd International Small Print Show, opening the weekend of December 4 to5, 2021, and running through January 31, 2022. The reception will be held on these days until 6:00 p.m. While the show is festive and fun, the discounted original art pieces are ideal for one-of-a-kind gift purchasing.

CPC offers several ways to get involved with printmaking. Classes include (but are not limited to): printmaking basics, stone lithography, traditional etching and multi-level screen printing. There are also online classes available for remote learning, national and international. Classes, especially those in-person, fill rather quickly. View the CPC website here.