“I think the more options that an uninsured student can have at their fingertips, the better.”

This story was first reported in 14 East’s newsletter, “In The Loop,” which sends city and campus news to your inbox every Monday night. You can subscribe for more breaking stories and original features – before they hit our site – here.

​For junior Patrick Sloan-Turner, learning that DePaul University doesn’t offer a student health insurance plan was a matter of both academic and personal inquiry.

“At DePaul I got interested in [the topic], because I’m personally without health insurance right now,” he said. Other universities provide health insurance plans for their students, and DePaul stood out.

During Fall Quarter last year, Sloan-Turner — an undergraduate journalism student — reached out to university officials to ask why.

“I don’t think that DePaul has placed enough importance, or … had enough concern about health insurance since I’ve been in school,” he said. “Just in me reaching out to administration, the response that I got was a little bit lackluster. I would have liked to hear a little bit more.”

After researching the issue for his classes, Sloan-Turner is now part of a new university-wide project hoping to learn more and find solutions.

According to Faculty Council President Sonia Soltero, the Faculty Council Executive Committee met January 19 to further discuss the process of nominating candidates to serve in advisory roles on the task force.

Following that meeting, an email from the Faculty Council was sent to faculty, stating research efforts will be led by Vice President for Student Affairs Dr. Eugene Zdziarski and will include faculty representation. 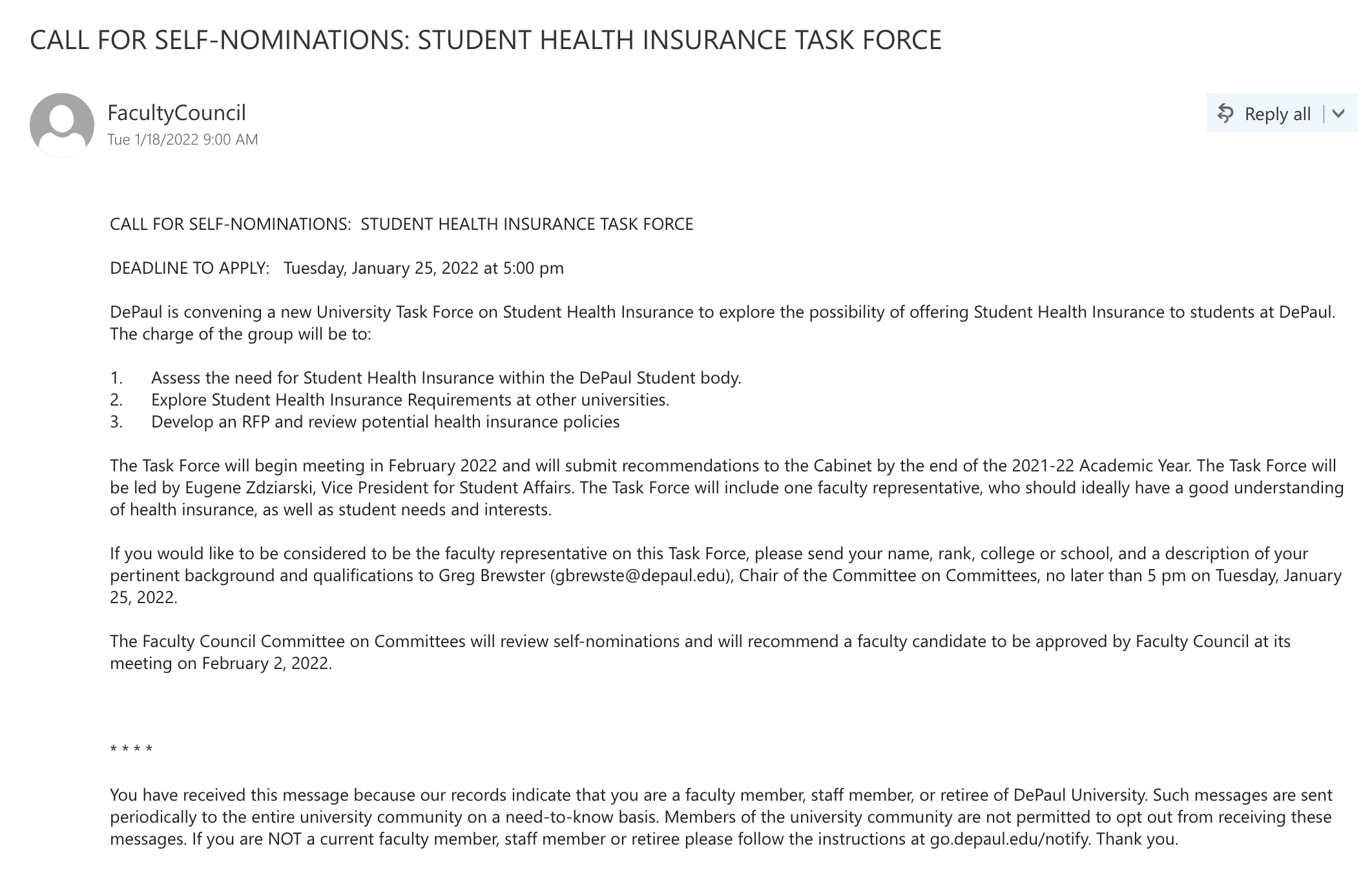 Faculty members across the university received an email on Tuesday about joining a University Task Force focused on student health insurance plans. (Email provided to 14 East by a faculty member.)

The Faculty Council email also said that the task force will begin meeting in February to “submit recommendations to the Cabinet by the end of the 2021-22 Academic Year,” in June after Spring Quarter classes end.

“Ideally the task force can complete these tasks and report back to university leadership prior to the end of the academic year,” Zdziarski said in an email to 14 East.

Under DePaul’s administration, task force recommendations are submitted to both the President’s Cabinet and the Joint Council, which consists of executive officers, deans, vice presidents and presidents of Faculty Council, Staff Council and Student Government Association.

According to  Zdziarski, two student representatives — one undergraduate and one graduate — will also be appointed to represent student interests on the task force.

On Monday, Sloan-Patrick accepted the position of undergraduate representative.

As of now, DePaul does not provide a university-coordinated student health insurance plan — something that’s typically included under tuition costs at other Chicago universities, like Northwestern and Loyola. According to DePaul’s Office of Health Promotion and Wellness’ website, the Division of Student Affairs offers guidance on “Affordable Care Act compliant health insurance plans” as well as the university’s partnership with AMITA Sage Medical group located at 1150 West Fullerton Avenue in Lincoln Park.

However, DePaul also doesn’t have its own health clinic — besides University Counseling Services for mental healthcare — so most health-related coverage and direction is provided by outside contracts like AMITA Sage Medical Group or through university departments like the Office of Health Promotion and Wellness.

This means students are largely responsible for researching their own healthcare plan, filing insurance claims and finding medical providers around DePaul campuses if they are not covered by their parents, employers or other organizations.

“I think the more options that an uninsured student can have at their fingertips, the better.”

“The most surprising thing was how rare it was that DePaul didn’t offer this,” Sloan-Turner said. “Every major four-year university that I looked into had a [health insurance] offering. And that’s like, in Illinois, outside of Illinois, you name it.”

When Chicago’s first stay-at-home order went into place, DePaul’s Office of Human Resources published a resource specifically for staff and faculty on how their employee insurance plans may cover virtual healthcare.

The COVID-pandemic altered access to student healthcare too, as campus clinics like UCS lost providers and in-person services, transitioning to the remote My Student Support Program app in Spring Quarter of 2021. At the January 12 Faculty Council meeting, member Jay Baglia, who is chair of the council’s health committee, announced that UCS hired four new part-time therapists for the Lincoln Park and Loop campuses.

As of now, DePaul automatically enrolls international students in the International Student Insurance program under the ISO Medical and Accident Insurance Company, which covers “an accident and sickness health insurance plan” to assist in paying for “major illnesses and medical emergencies.”

However, the last time all students were offered the option of a healthcare plan from the university was 2015, when The DePaulia reported a discontinued contract with former university provider Aetna. At the time, Zdziarski said in an email to faculty and staff that the Affordable Care Act would replace university-sponsored plans due to increasing private premiums, or insurance rates.

This was because health insurance was required for most Americans under the “individual mandate” clause as part of the ACA prior to 2019.

Yet the difficulty in retaining student healthcare assistance from the university was also noted by DePaul doctoral students in 2018. According to an article from The DePaulia, “the fight for Ph.D. health care dates back to 2010,” when the ACA was first enacted nationwide.

Since then, a federal appeals court ruled the individual mandate of the ACA was unconstitutional, meaning healthcare plans were no longer required by the federal government. Zdziarski said in an email to 14 East that this context changed the insurance market at the federal level which added to increased costs of healthcare plans.

“I have used both Medicaid and plans off of the federal marketplace. And, you know, they’ve been virtual lifesavers at times,” Sloan-Turner said. “I think the more options that an uninsured student can have at their fingertips, the better.”

As a whole, the health insurance industry is a minefield consisting of state and federal regulations, employer responsibility to provide coverage, and issues of inequity and access in the public health system. So, what does student health insurance look like in practice?

According to a 2018 survey, college students make up one of the “single largest, cohesive groups of uninsured individuals.”

At universities or colleges that offer them, student health insurance plans are typically funded by a partnership with a medical group, or insurer, meaning the school as an organization assumes responsibility for payment, known in the industry as “self-insuring.”

Students in these cases tend to be covered by a health insurance plan as part of their enrollment at their school under tuition costs. However, other schools may provide only partial insurance plans, leaving students to “self-fund” a portion of their healthcare-related expenses.

This means student healthcare plans provided by colleges and universities vary widely depending on which medical associations a school contracts with, what their specific insurance plan covers and how students must then pay for their medical expenses.

Whether students pay for insurance coverage via tuition or have the option to choose their own plan upon enrollment, access to medical providers and the actual cost of the insurance plans’ co-pays, or out-of-pocket payments, are key variables for sustainable student healthcare access.

Insurance in the medical industry deems which medical providers are “in-network” or are covered under a specific insurer and its particular healthcare plan. If a university insurance plan only covers certain clinics — as Northwestern University does — students living off-campus or with specific prescription needs face changes that could limit or improve their healthcare access from year-to-year.

“I thought maybe the government kept track of [data on student health insurance rates],” said Sloan-Turner. “They don’t really, I mean, they keep track of the uninsured rate by age and by private versus public institution, but [the data] still wasn’t broken down enough.”

For student representative Sloan-Turner, the most important part of the new task force will be identifying the number of uninsured DePaul students based on age and other variables.

When asked about the task force process, he said, “What I hope personally, is to be able to select a plan that best fits the DePaul student body.”

According to a 2018 survey from Lookout Mountain Group — a research organization that tracks insurance and health services at U.S. universities and colleges — college students make up one of the “single largest, cohesive groups of uninsured individuals.” The study noted access to university or college insurance plans plays a major role in healthcare coverage besides government enrollment programs like Medicaid.

“But even so, if we were to cut [Lookout Mountain Group’s] estimation for the uninsured rate among undergrads, if we were to cut that number in half, that’s still, you know, over 1,000 kids at DePaul who go without health insurance,”  Sloan-Turner said.

Editor’s note: This story was first reported in a 14 East newsletter feature and later corrected and contextualized with additional reporting. The newsletter story included errors implying the DePaul Vice President’s Cabinet would be involved in the task force and lacked context surrounding the university’s decision to discontinue student health insurance plans in 2015. The above story has been corrected to clarify the task force will report findings to the President’s Cabinet and Joint Council, and additional information was also provided on the Affordable Care Act and its effect on insurance costs over the last decade.