Finding Yourself in The Game: ..

How COVID Changed Them: The Pa..

“She was such a joy to watch and she’s just an incredible artist, and to have the opportunity to have someone at her level come to DePaul and do an intimate Q&A and acoustic show for us was so rewarding.”

20-year-old singer-songwriter Alix Page took to the stage at DePaul’s Student Center on February 9. The concert, organized and hosted by DePaul’s Music Business Organization, was the first live music event of an external artist that DePaul put on in over two years.

Page, who hails from Costa Mesa in Orange County, is currently on tour with fellow indie-melancholic singer Gracie Abrams. Abrams made headlines in December after announcing her 2022 United Kingdom tour dates and being added as an opening act for Olivia Rodrigo’s highly anticipated Sour Tour. Until Abrams begins the Sour Tour on April 5, she is touring the country with Page as her opener.

Page, who has almost 75,000 monthly listeners on Spotify, released her first EP Old News, a four-track project featuring two pre-released singles and two new songs exclusive to the record, on January 28. The artist, who performed an acoustic set without her band on February 9, played all four songs from the EP, as well as several other originals like “Stripes” and an unreleased song, “Pulling Teeth.”

“[This song] is very, very sad,” Page said when introducing “Pulling Teeth.” “My mom hates this one because it makes her sad.” 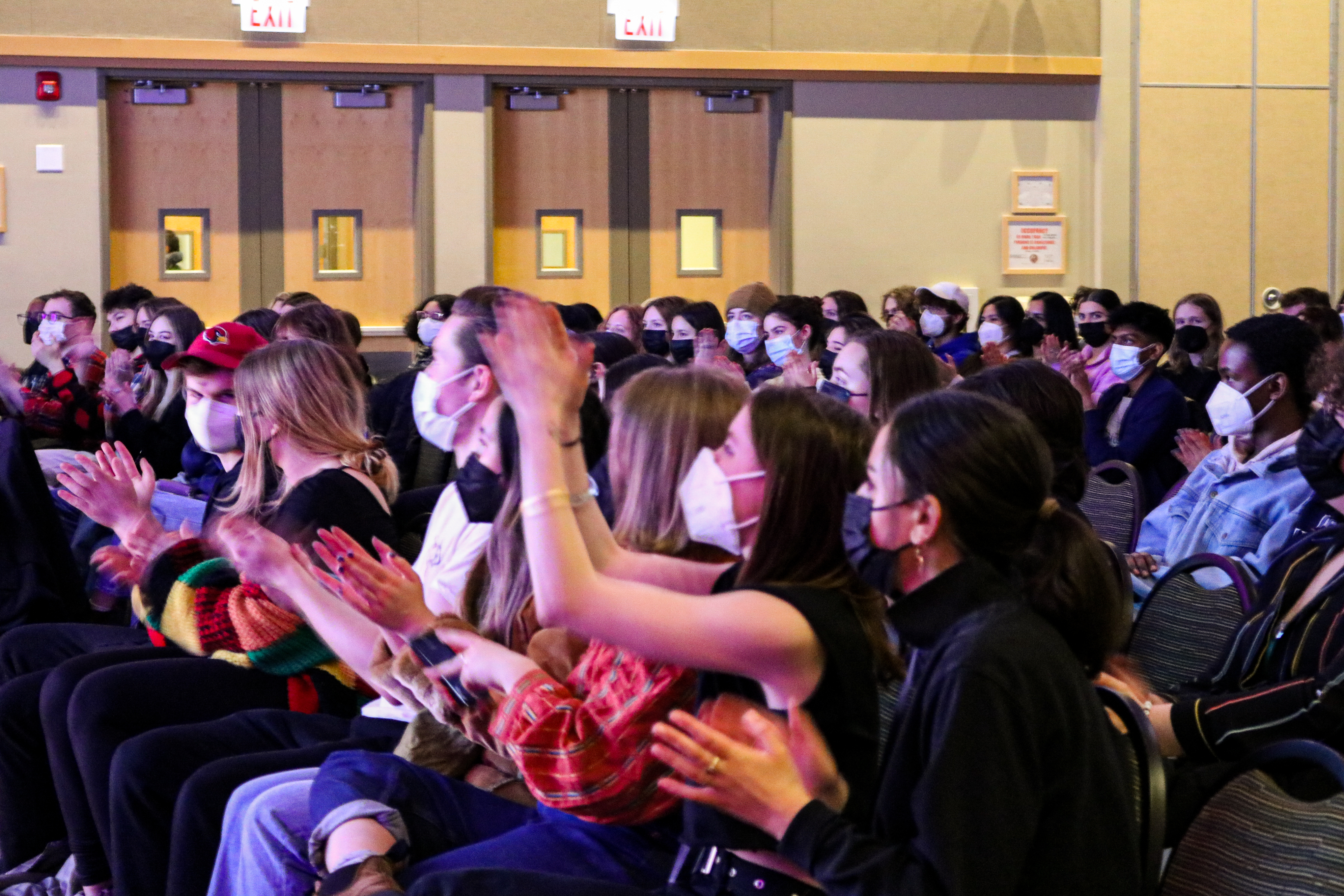 Page delighted the DePaul audience with three unique covers, ranging from Post Malone’s “Circles”  to a slowed and soulful version of Caroline Polacheck “So Hot You’re Hurting my Feelings.” At future shows, Page wants to add her own spin on songs like Fountain of Wayne’s “Stacy’s Mom,” or Rick Springfield’s “Jessie’s Girl.”

“I don’t know about you guys but I’m a big Bruce Springsteen fan. Gotta represent,” Page said before jumping into a cover of “I’m On Fire” that oozed with her signature heartache and tenderness.

Page, a sophomore songwriting major, took time off from University of Southern California’s Thornton Popular Music program to tour the country as Abrams’ supporting act. During a question and answer session that followed her performance, she answered questions from the audience about her inspirations, influences, songwriting process and awkward interactions with her exes.

Several of her songs — “Stripes,” “Frank,” “Radiohead,” “June Gloom,” just to name a few — are about past relationships. According to Page, several of her exes have reached out after hearing her songs. The reactions vary from positive feedback on the song to apologies. 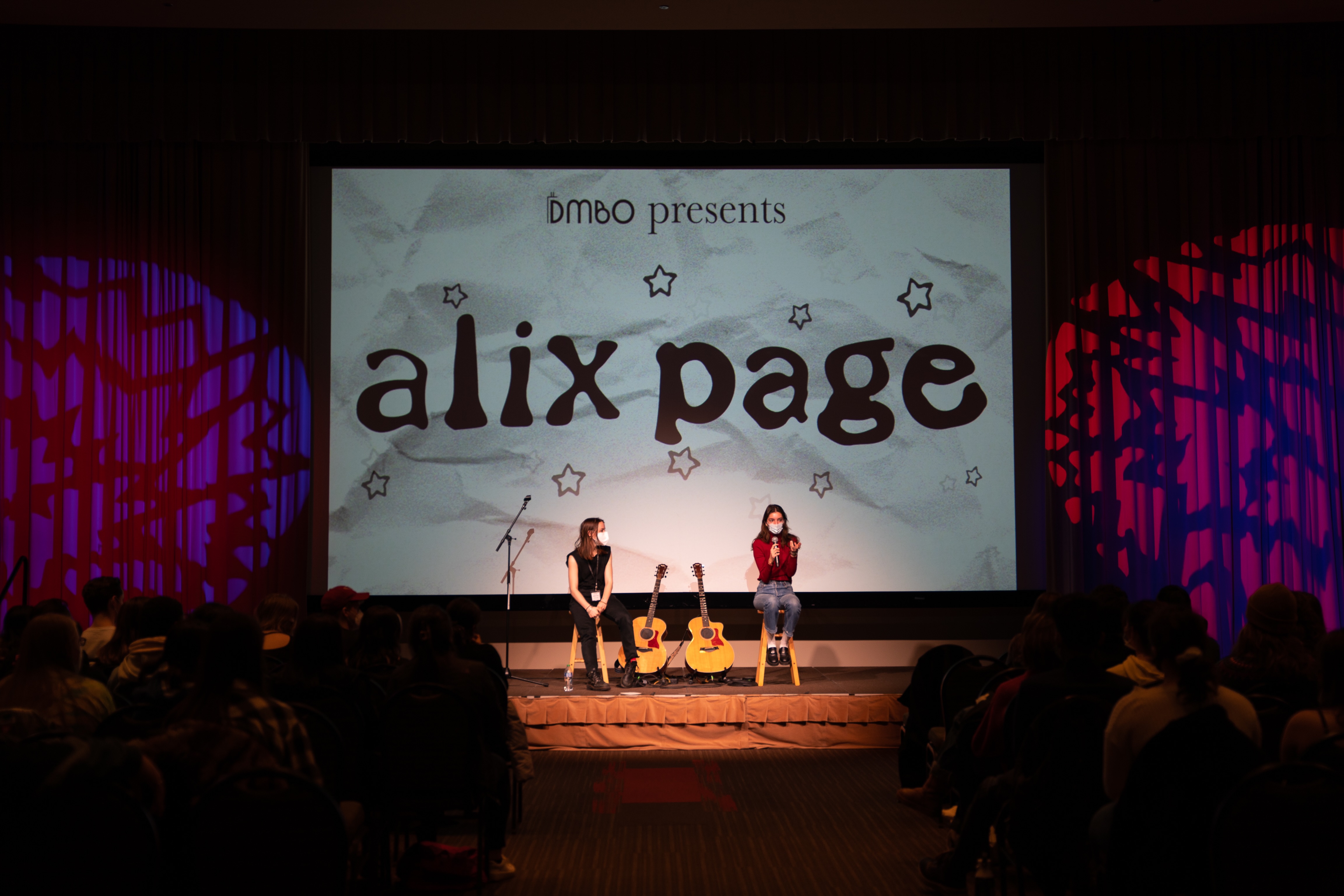 Page (right) during a Q&A session after performing. Photo by Ava O’Malley, 14 East

“I’m very secretive about sharing songs [about someone] before they’re out because I think it’s so much more impressive to be like, ‘Here’s this song that’s fully produced that you had no idea about,’” Page said in response to an audience member’s question. “It’s a little superpower that you have.”

The isolation of COVID-19 sparked inspiration for Page, who found herself reflecting on the patterns of her past romantic relationships. “A lot of Old News is [about] falling back into old habits and feeling very stuck and like you can’t grow up,” said Page during an exclusive interview with 14 East. “I think [during] quarantine, when I was falling back into my feelings for my most recent ex, I just felt so locked into my 16-year-old self.”

The pandemic was also when Page first began interacting with Gracie Abrams. After sharing a cover of Abrams’ song, “I miss you, I’m sorry,” on her Instagram account, Page noticed that the artist liked the video and followed her back.

“I posted a cover for the [song] in April of 2020, like peak pandemic, I think it was like Easter maybe. And [Gracie] liked and commented and then followed me. I was literally in my pajamas and it was like 6:00 p.m., but it was quarantine and I had lost the will to do anything,” said Page. “And I freaked out and was just at a loss as to why she followed me because artists comment on stuff kind of frequently and post about it, but rarely do they follow somebody.”

Months later, Page got the news from her manager that she had been offered a spot on Abrams’ 2022 tour.

Page has admired Abrams’ casual approach to social media as an artist and hopes to interact with fans in a similar manner. “Gracie Abrams, who I’m opening for, is amazing and she has been huge in terms of how she uses social media and it’s very helpful for fans,” said Page in response to an audience member’s question. “[She is] very personable and just has this cute, wholesome personality. I always like artists who you can just like to connect with more.”

Abrams has served as a source of songwriting inspiration for Page, along with other artists such as Phoebe Bridgers, the Killers and Frank Ocean.

In her 2020 song “Frank,” Page directly references the neo-soul artist’s song “White Ferrari,” in the opening lines. In addition to making references to Ocean, Page admires the way that he captures vulnerable, intimate moments in his music. “Bad Religion” is a song that stands out from Frank Ocean’s discography in particular to Page.

“I love songs [that have] such a specific image. Even the religious imagery is so cool to me. I think that’s amazing in there, and that [we can] picture [Frank] sitting in traffic, having a breakdown, confiding in a taxi driver, I think that’s like a super, just clear image,” she said.

Page finds song inspiration in everyday moments — while showering, drifting off to sleep, driving her Volkswagen Jetta or reflecting on conversations. “Pulling Teeth,” which is not released yet, was inspired directly from a conversation she had with the same ex that “Stripes” and “June Gloom” are about. 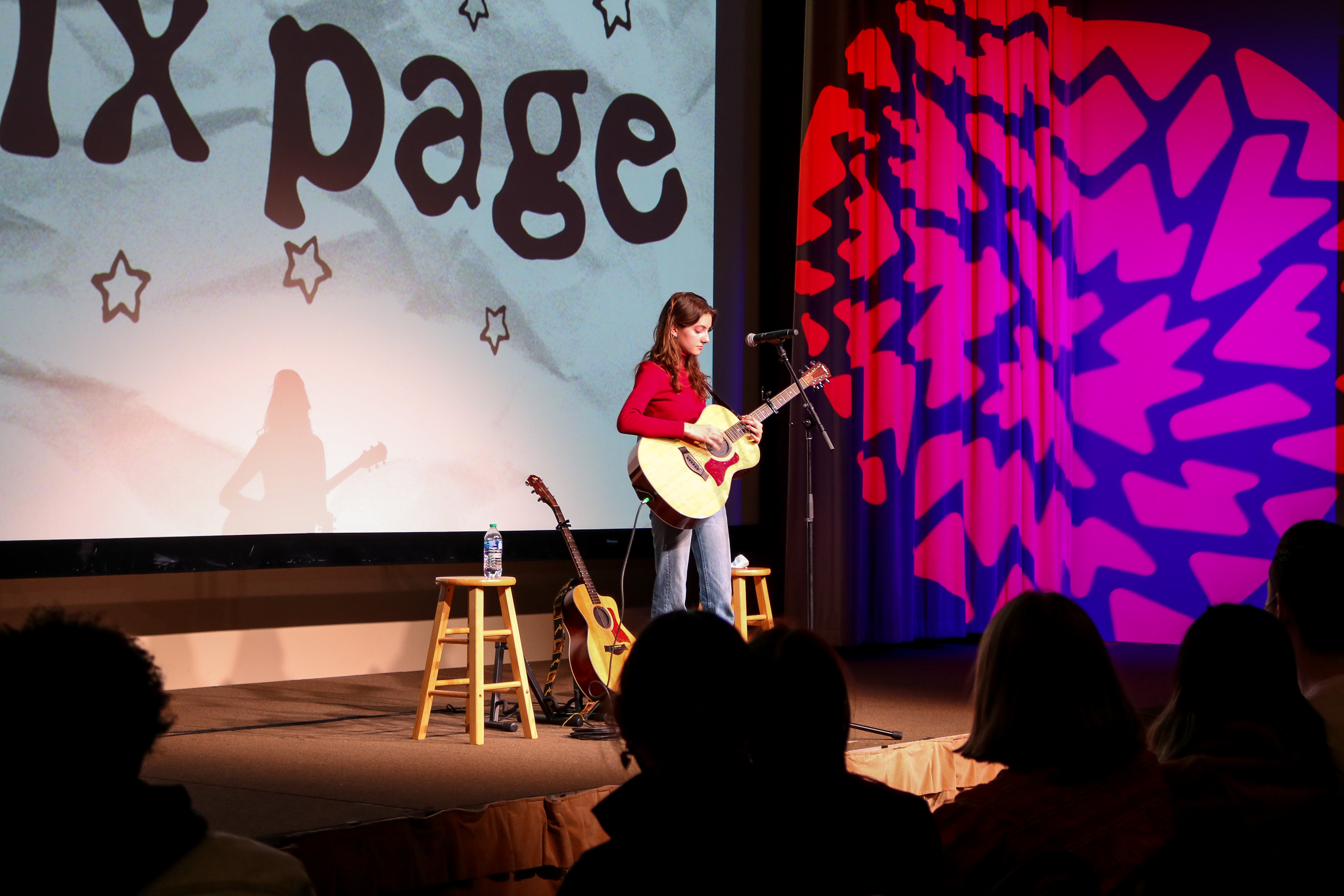 “I was going through a breakup with somebody who was already kind of giving the bare minimum in the relationship and we were having one of our final conversations, and he was like, ‘I don’t want to keep on pulling teeth to make this work,’” said Page. “That’s a very distinct and clear image. Right away I was like, ‘Oh, that’s going to be a song.’”

Keeping a small circle is important to Page, who sang in her middle school’s worship team and grew up in Orange County, California’s third most populous county. As a Scorpio, she says that she has trouble making friends, but is intensely loyal to the friends that she does have.

“I’m a Scorpio and then I’m also a Cap moon. Scorpio is very intense and very loyal, and doesn’t make friends super easily. But when I do, they’re forever, and it’s a very strong friendship,” said Page.

Several of her friends from high school are in her band and production team. One friend, Natalie, stood by the stage in the Student Center to photograph the performance and take footage on a Super 8 camera.

Margaret Wilkinson, 21, is the co-president of DMBO and helped organize the concert. According to Wilkinson, Page’s manager, Cole Silberman, was eager for Page to perform at a college while touring. “I had a phone call with Cole and he seemed like a great resource for the club and the show sounded like a perfect opportunity for us to get experience organizing a live show,” said Wilkinson.

The club spent one whole month organizing the event. Planning the concert involved applying for funds through SAF-B funding from the Office of Student Involvement and proposing the idea to the university. Since the deadline for SAF-B funding was approaching, the club only had five days to apply, a process which typically takes several weeks.

“We really weren’t sure if it was going to be possible considering the small amount of time that we had, but we just kept moving forward in order to make it happen,” said Olivia Dunn, DMBO’s fundraising and events coordinator. “We decided to go for it and things just started falling into place. It felt miraculous that it could even happen.”

The university extended the club’s application deadline, which helped alleviate some stress. Page was only in Chicago for a small window of time, so the date of the concert needed to be on February 9.

“We were like a little out of this one deadline window, but we were able to get an exception because we explained our circumstances about the show not being a flexible date,” said Emily Robinson, the marketing chair for DMBO.  “[The university] was really understanding of that.”

After the university granted DMBO approval to host the concert, club members went straight to work in promoting the event, creating flyers, graphics, lighting designs and projections for the performance. Around 120 people attended the concert and the response from both the organizers and audience members was overwhelmingly positive.

“I think [the concert] was very successful in that we were able to provide a real-world learning experience for our members looking to go into the music industry,” said Wilkinson, a senior studying business administration and music business. “Seeing students tell Alix how they were impacted by her performance during the Q&A session reminded us of live music’s impact and it was really special to witness that from an event planner perspective.”

“She was such a joy to watch and she’s just an incredible artist, and to have the opportunity to have someone at her level come to DePaul and do an intimate Q&A and acoustic show for us was so rewarding,” said Robinson, a sophomore studying marketing, economic data analytics and music business.

This was the first live show that the current board of DMBO organized. During the pandemic, DMBO largely operated online, hosting panels and networking opportunities with music industry professionals. Now that classes are back in person, DMBO has in-person meetings on Monday nights in Arts & Letters Hall and is hosting events like a record-shop crawl and a battle-of-the-bands that’s currently in its preliminary stages.