Lincoln Park’s Olor Coffee Bar is the product of hard work and perseverance. Owner Luis Zurias is the force behind it.

On a gloomy spring morning, Luis Zurias commits to his usual routine — wake up at 5 a.m., get dressed in his barista outfit and drive to Olor Coffee Bar before 7 a.m. Leading up to another work day, he makes sure to eat a hearty breakfast because lunch breaks are never guaranteed. In fact, they are rare to none.

“I haven’t had a day off since January 1st,” the 28-year-old told me while walking to the corner table. Looking like a makeshift office near the emergency exit, every inch of the desk is occupied — with a half-filled water bottle, stacks of paper, a laptop playing ambient melodies and chunks of pear for when he needs a pick-me-up. 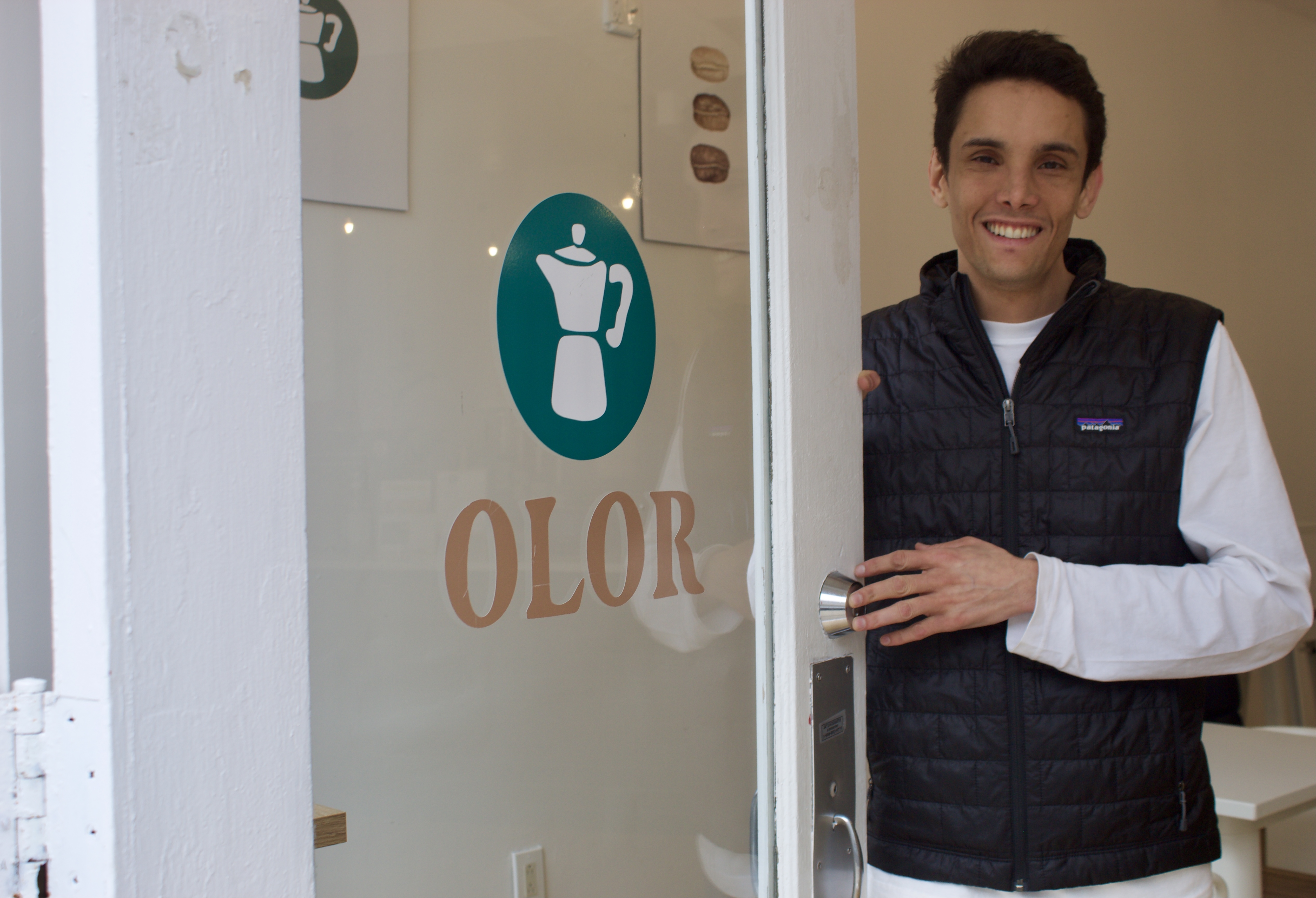 Luis Zurias at the front door of his coffee shop, Olor Coffee Bar which is located in Lincoln Park. Zurias opened the shop on December 1, 2021. Photo by Jessica Nalupta, 14 East

Moving to the U.S. from Venezuela in August 2018, he recalls having “zero English and more or less [than] $800.” To practice his language skills, he found a website to connect with English speakers. This is how he met DePaul alumni Nick Teetsov. After a phone call, they found out they were both in Chicago and decided to get coffee.

“He mentioned in the first meeting [that] he wanted to save up money and he wanted to connect with people through the store and live out his passion,” Teetsov said, recalling his first interaction with Zurias. “I know he worked tirelessly for years to save up that money and worked multiple difficult jobs.”

Even back then, Zurias already wanted to build his own coffee shop.

“I truly believe that if you want to go to a country, you want to immigrate [and] you want to have a good life, it’s more than just buying stuff [like your] phone, clothes and a car because in this country, those stuff mean nothing,” the Olor owner said. “You need a clear vision of what you really, really want and for me, I love coffee beans.”

He is most intrigued by the planting and processing of coffee beans. Before moving to Chicago, he even went to Seattle, the country’s coffee capital.

However, Zurias knew that vision alone won’t cut it. He needed funds to actualize his dream.

His first job in the U.S. was as a kitchen helper at a Mexican restaurant in Andersonville. Then, he got a job at a coffee shop in River North where he worked from 6 a.m. to 2 p.m. After his morning shift, he got a short break before his night shift at a bar where he worked from 7 p.m. to 4 a.m. He juggled these two jobs for six months.

During the onset of the pandemic, when the restaurant industry took a halt, he started doing deliveries for Grubhub. His first spot of choice was on Broadway Street in Lakeview, but someone rented it before him. While completing a delivery in July, he eventually found a “For Lease” sign on Olor’s current location at 1013 W. Webster Ave.

After five months of setting a deal with the realtor, watching countless coffee-making YouTube videos, designing the logo and completing everything needed to start a business, Zurias took a leap of faith and spent three years’ worth of savings on Olor. 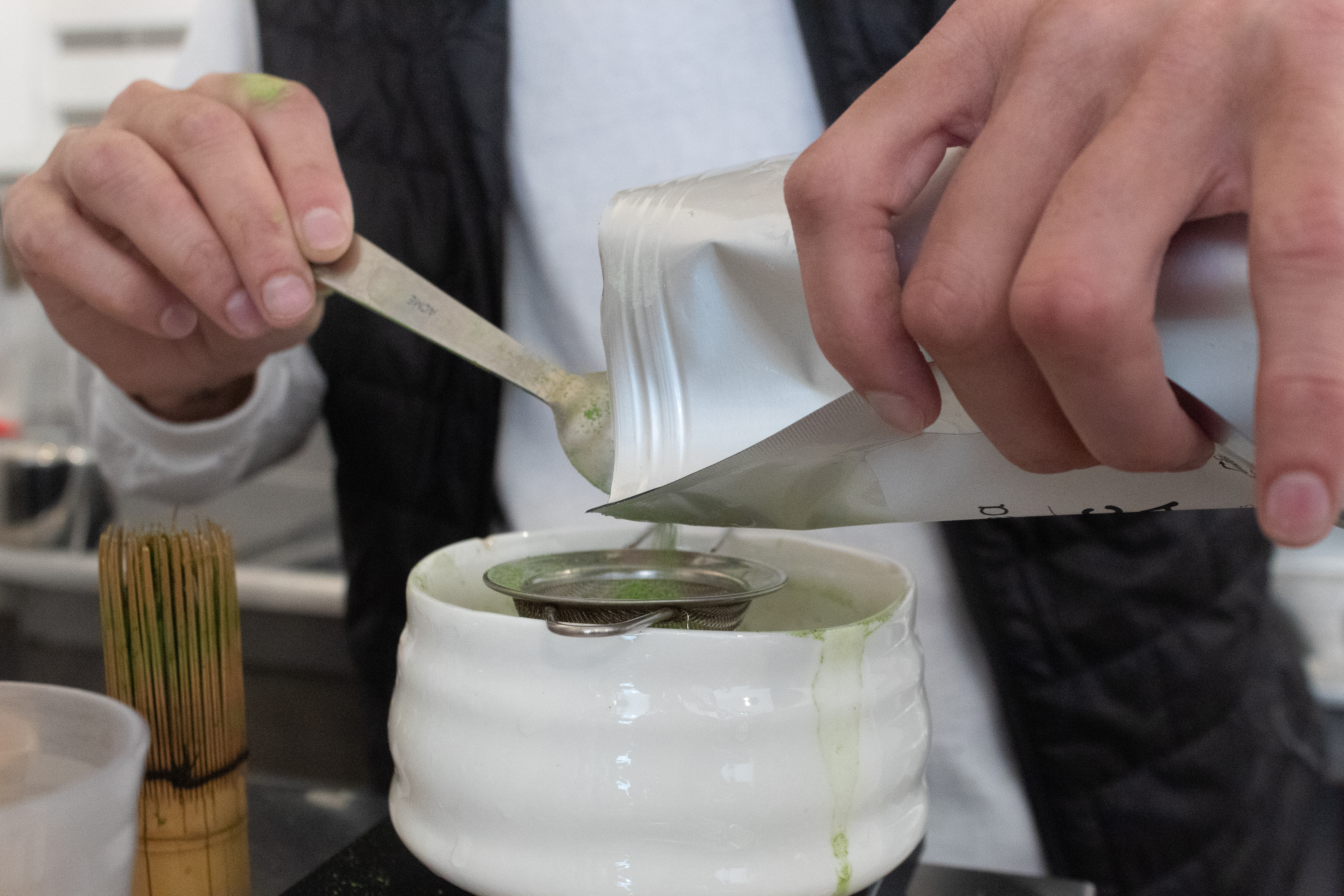 Zurias pours matcha into a chawan (tea bowl) to prepare a matcha latte. He previously worked at a café and watched many YouTube videos to learn how to make drinks. Photo by Jessica Nalupta, 14 East

“Being able to support people like Luis is great, given [that] there’s a lot of options for coffee in this neighborhood, obviously really big corporations that are all on Armitage [Avenue], but knowing that when I come here, I’m supporting something that is going directly into the community,” Kamin said.

He immediately offered Zurias advice after their first meetup.

“Luis opened in December and that’s just a tough month no matter what in Chicago for foot traffic,” he said, explaining the impact of winter. “I told him [to] just be patient, serve these people that come in and just take care of them.”

Zurias did just that. And more.

Aside from concocting drinks day in and day out, he manages the café’s grocery needs after work and trains the newly hired barista. All while connecting with his customers.

“You have to treat [them] with amazing customer service,” he said, right after he politely paused the interview to attend to a customer who just came in. “If you have a lot of regulars, treat them as friends because money doesn’t buy those relationships.”

Cory Barnes, DePaul’s Black Cultural Center Coordinator, habitually stops by the café three to four times a week. Aside from enjoying Olor’s oat milk latte, he considers his visits a “form of solidarity.”

Owning a coffee shop himself, Barnes found it natural to connect with Zurias.

“We have very detailed [and] nuanced conversations because we’re in it together,” he said, adding that they give each other tips on how to move their respective businesses forward. “We talk about what it looks like building community and building rapport with our customer and client base. It’s just basic little things like remembering their name, remembering their drink [and] asking them how their day was.”

Barnes said that this type of interpersonal engagement with customers is critical for the success of a small business. 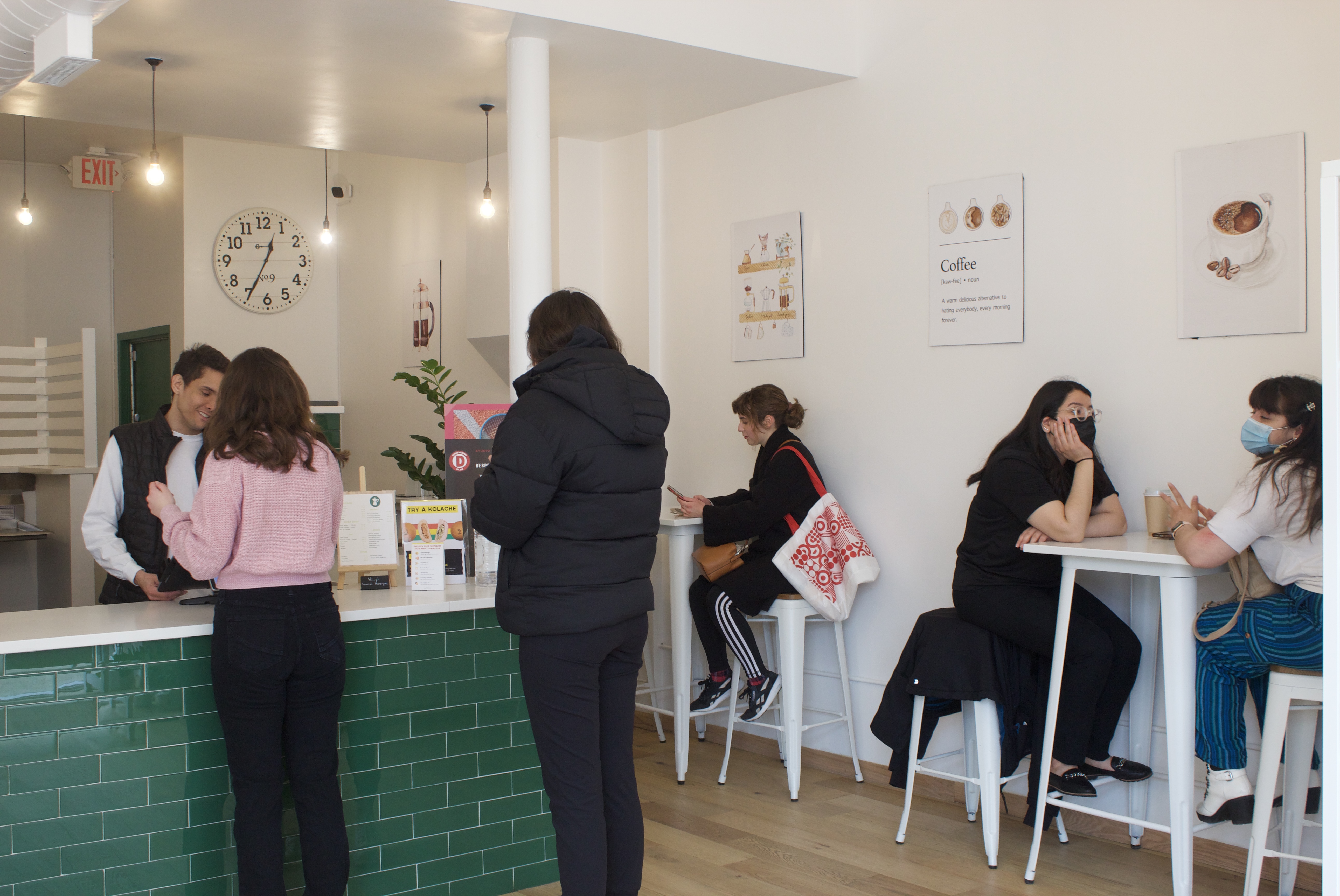 Zurias attends to customers as they come in to order. Photo by Jessica Nalupta, 14 East

“He has a vision of seeing Olors all over the country [and] all over the world like he wants to make Olor a global brand,” Barnes said. “And so by hearing that, how can I support that?”

When asked about what’s next, Zurias let out a laugh and said, “Next location? I already saw one in Lakeview.” It’s the exact spot on Broadway Street he always wanted Olor to be in.