“What I love about podcasting is it’s so accessible, both in terms of the equipment needed and whether it’s an interview or documentary or a mixture of it.”

In the last five years, podcasting has exploded in popularity, and it seems like everyone is either starting a podcast, listening to a podcast or being interviewed for a podcast. Almost 60% of Americans over the age of 12 listened to podcasts in 2021. Since the emergence of the podcast in the early aughts, there are now 3.2 million podcasts on Spotify as of December 2021.

Some of those 3.2 million podcasts are ones hosted by DePaul University students, faculty and staff, with topics ranging from dating to self-care to business.

DePaul seniors Gianna DeTomaso and Geo Camarena are the hosts of Singles in the City, a conversational podcast with discussions that fall within the larger topic of dating and sexuality.

The roommates decided to create the podcast in September 2020, after a friend pointed out that Camarena, a communications and media student, had a great voice for podcasting. After discussing the idea with DeTomaso, who studies anthropology, psychology and theater, the two agreed to create their show. Deciding on the theme came easily to the two friends.

“Gianna and I had been friends since the middle of our freshman year. Slowly, we saw a lot of similarities between our dating lives and our views on a lot of different topics dealing with sexuality and sex,” said Camarena.

At first, the two felt hesitant to share their views on topics like intimacy, personal relationships, gender, sexuality and dating to a public audience.

“We’ve done some reflecting and we just realized, like, what else we do with the podcast? [It’s] not just sex and dating tips, but different issues that we discuss. And now, I’m a lot happier and more proud of the podcast than I was at the beginning,” said Camarena.

“We’re also talking about deeper social issues and how gender plays a role in [them], which is really important and needs to be talked about. And I don’t think there’s enough people doing that. So I’m really proud of us for incorporating many different details into our podcast,” said DeTomaso.

DePaul senior Hannah Seldowitz’s show, Stories of the 5 Foot Shorties, also delves into the world of dating and romance. Her podcast, which she originally started in 2020 with her best friend back in New York City, also covers topics like trauma, college life and mental health.

“[The podcast] is storytelling, but also having hard conversations … [It’s] those conversations that you would have with close friends, but recorded,” said Seldowitz, who studies communications and media. 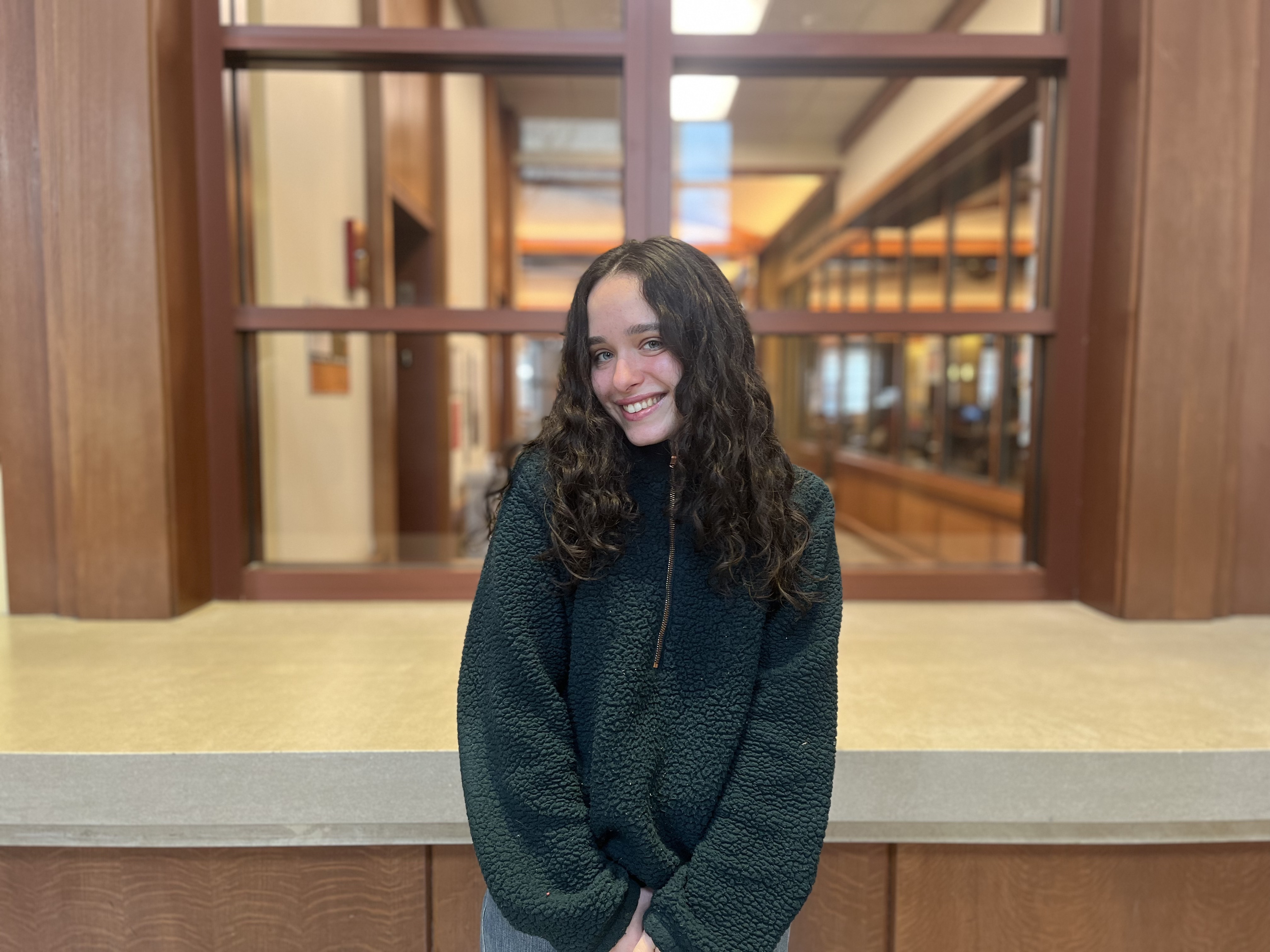 Seldowitz stands outside of the John T. Richardson Library, where she often records in the study rooms. Photo by Ava O’Malley, 14 East

Recent DePaul grad Maya Tersigni hosts the podcast Vibe and Cultivate. She, like many other podcasters, started her show during the pandemic.

Tersigni’s show began on her Snapchat story, where she would vent and discuss what was on her mind with her friends. Similar to Camarena, Tersigni’s friends encouraged her to start a podcast. Her show largely addresses mental health, but also includes discussions on success, family and more.

“In August of 2020, during the pandemic, I found that a lot of people, including myself, were struggling with mental health, and balancing school and bills and work and family and everything,” said Tersigni. 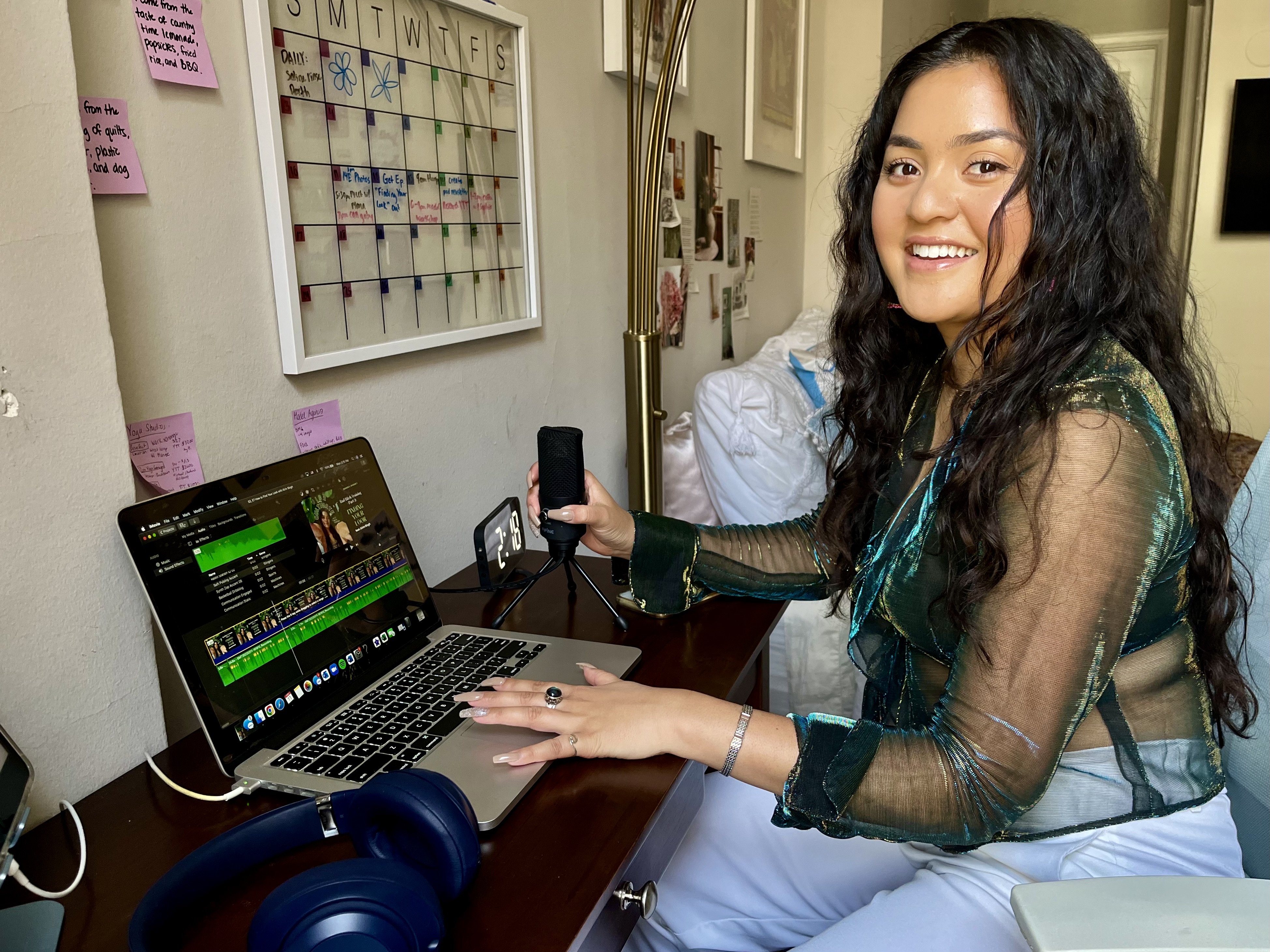 Tersigni sits at her podcasting workspace where she demonstrates her editing process. Photo by Ava O’Malley, 14 East

Tersigni’s piece of podcasting advice is to always seek to serve your audience rather than yourself. Vibe and Cultivate has an audience of predominantly young people. The Bay Area native uses Spotify analytics to gain a deeper understanding of her listeners and craft appropriate content for them.

Media and communications student Amber Ali launched her podcast during the pandemic as well. Her podcast Brownie Points was born from a failed blogging project. The show, which began in August 2020, originally centered around women of color in business, but has since expanded to welcome people of color pursuing a wide range of careers.

“We have comedians on, we have entrepreneurs on, we have spiritual coaches on. Pretty much, anybody, that’s doing their own thing,” said Ali.

Ali was inspired by the Black Lives Matter movement, particularly the demonstrations that ensued following the murder of George Floyd in May 2020.

“The podcast is storytelling, but also having hard conversations … it’s those conversations that you would have with close friends, but recorded.”

“This was one of the times where I just had opened up my heart, and I really had been moved by what was going on. And I was saddened and frustrated. And I felt like there was something that I needed to do, if anything.”

To Ali, her podcast is unique because each episode acts as an autobiographical account of her guest.

“I think when you bring someone on from a different walk of life, or you know, a different field that they’re doing and working in, you learn a lot about them in a matter of an hour. And so I think the uniqueness of the podcast is truly that I give them that space to be themselves,” Ali said.

Ali calls on other student podcasters for support or inspiration. “Other podcasts that are owned by people who’ve been to DePaul have been helping me out. Also other students from other schools in Chicago,” she said.

Judith McCray, founder and CEO of independent media company Juneteenth Productions and senior professional in residence at DePaul’s College of Communication, created the Change Agents Podcast with co-executive producer Maurice Bisaillon in 2020. McCray’s introduction to podcasting was through a one-day podcasting workshop at DePaul in 2017.

A month after the workshop, McCray was invited to produce Zebra Sisters, a Chicago Sun-Times podcast hosted by journalists Mary Mitchell and Leslie Baldacci. McCray had to learn the ins and outs of podcast production on the fly. After six months of recording, she was hooked.

“What I love about podcasting is it’s so accessible, both in terms of the equipment needed and whether it’s an interview or documentary or a mixture of it,” said McCray. “It’s much more conversational and much more familiar, intimate than I think a lot of radio has been in the past.”

Podcasting was initially attractive to listeners due to the convenience factor. It was a technological marvel that, as long as you owned an iPod, radio episodes could be downloaded and saved onto your device, ready to be played whenever. For creative folks looking for a new form of expression, self-made podcasts were perfect, as they lacked the guidelines and restrictions of standard radio broadcasts. While the first true podcast is still disputed, we know that by 2004, the word “podcast” was searched on Google over 100,000 times.

In 2022, the most popular podcast on Spotify is the controversial Joe Rogan Experience, which recently came under scrutiny for promoting anti-vax propaganda and other misinformation. This week, the Batman Unburied, MrBallen Podcast, Crime Junkie, and Anything Goes with Emma Chamberlain are also at the top of the podcast charts. Many popular podcasts have inspired others to create their own.

Animation student Esther Ajayi has hosted her podcast, Saint Talks Tew Much, since Dec. 30, 2021. It’s a conversational style show where Ajayi discusses a myriad of topics, ranging from Black hair to weekly news and anime. The podcast is inspired by comedians Cody Ko and Noel Miller’s famous Tiny Meat Gang podcast, in which the two hosts simply sit and have a conversation about pop culture, sports or their lives.

With the help of her boyfriend, who also runs a podcast, and a sound designer friend, Saint Talks Tew Much has seen an upgrade in production. Ajayi also has sponsors through the Anchor app, which provides podcasters with sponsor matches once a show reaches a specific number of listeners. 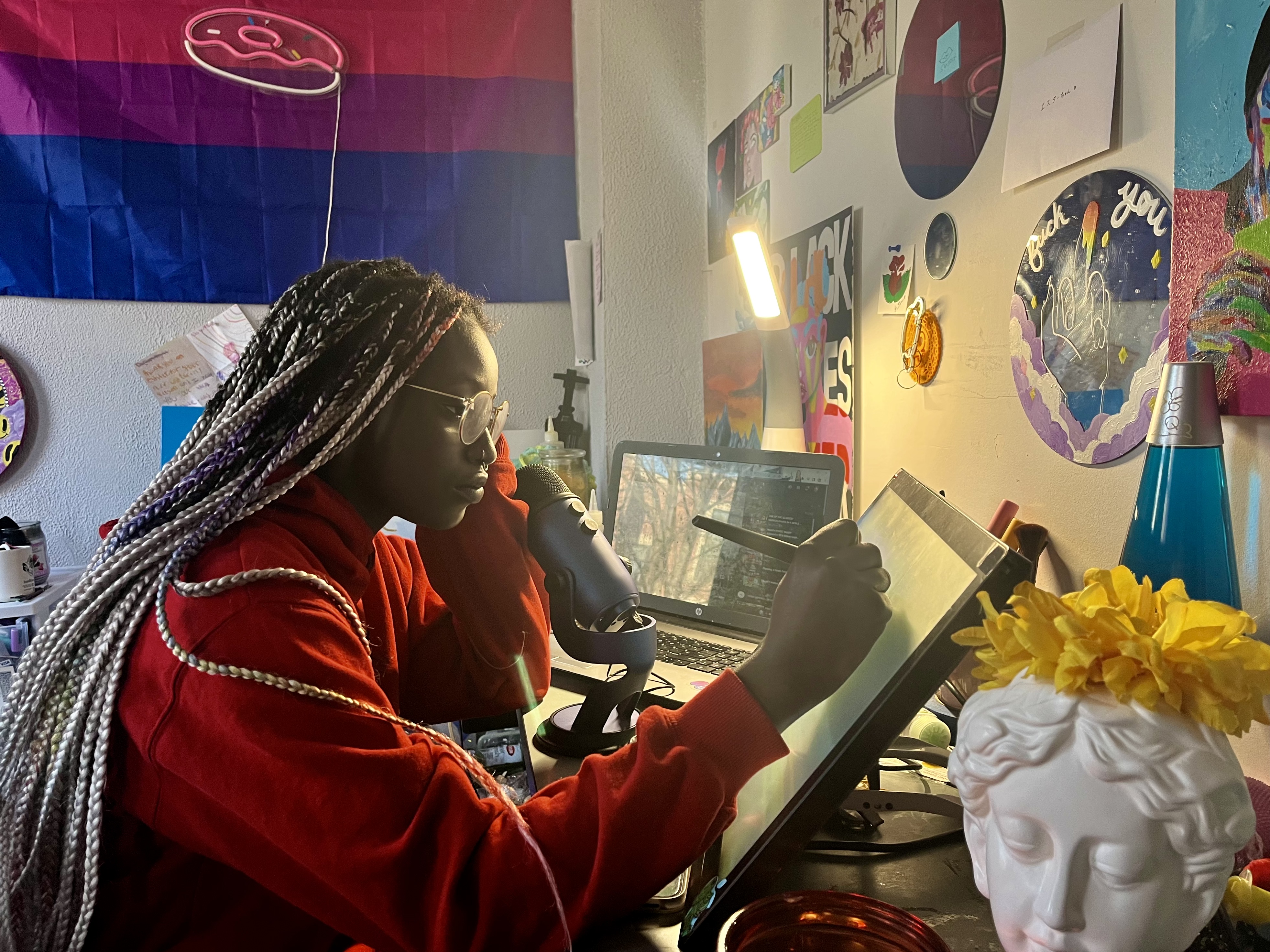 Ajayi works on animation projects at their desk, where they also record and produce podcast episodes. Photo by Ava O’Malley, 14 East

Although Ajayi took a brief hiatus due to school, she hopes to resume uploading every Sunday soon. As her podcast grows and develops, Ajayi wants to bring a friend on as a guest.

All of the student podcast hosts interviewed create their podcasts from their homes. As podcasting has shot up in popularity, so have podcast creation sites like Anchor or Riverside.fm. Tersigni, Camarena and DeTomaso, and Seldowitz all use Anchor to record, edit, or distribute their shows. 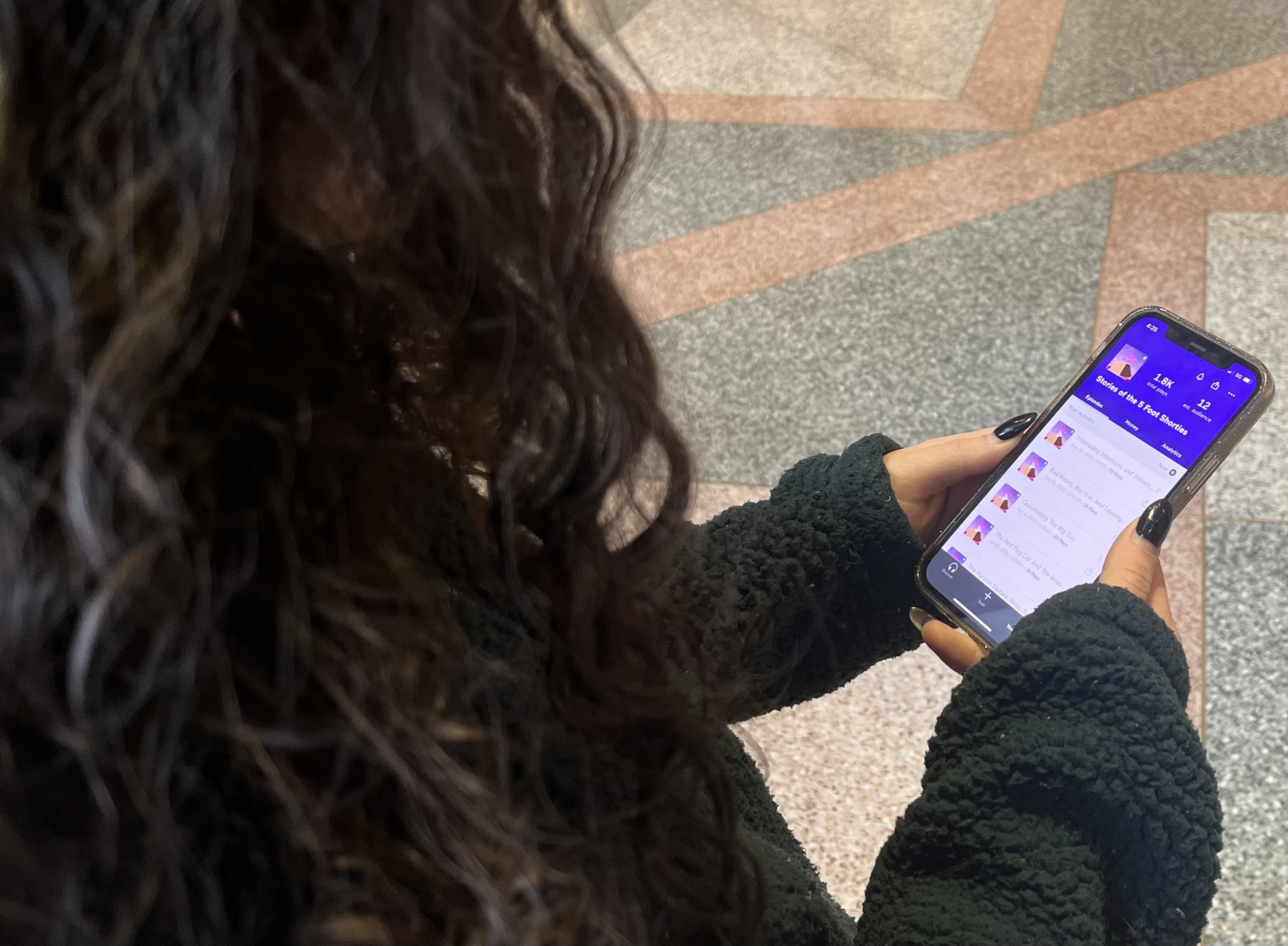 Seldowitz opens the Anchor app, which displays all of her published podcast episodes. Photo by Ava O’Malley, 14 East

Where listeners can access podcasts has changed since podcasting was introduced. The term “podcasting” comes from combining “broadcast” and “iPod.” In 2005, Apple introduced podcasts to iTunes 4.9, making them even more accessible to listeners. However, Spotify currently holds the top spot as the most popular podcast platform, with 25% of U.S. listeners choosing the streaming service over other platforms.

Podcasting has become so popular that DePaul now offers several podcasting courses. The College of Computing and Digital Media offers POST 120: Audio for Podcasts and Other Media, which serves as an asynchronous introduction to podcast creation. CMN 292: Adobe Creative Cloud Workshop for Audition provides students with an introduction to Adobe Audition, audio editing and podcast creation. Students can learn how to create their own podcasts, or gain a better understanding of this rapidly growing medium.

As the world of podcasts continues to grow, consider adding some of these Blue Demon-led podcasts to your queue.