A Positive COVID Test and an E..

Meet the Man(uel) of the Hour: DePaul’s New Presid...

Listen Up! Conversations with ..

Meet the Man(uel) of the Hour: DePaul’s New President

“My job is to come here and find out what everybody wants to accomplish, what the possibilities are, and then figure out how to bring that to life.”

On May 10, DePaul announced its 13th President-Elect, Robert Manuel would begin his term this summer after a nearly year-long search for current President A. Gabriel Esteban’s successor.

According to a press release, the university’s Board of Trustees “unanimously elected Manuel at a meeting on April 21.”

In June of last year during his fourth year in office, Esteban — DePaul’s first lay president — announced he would be stepping down from the position. While President Esteban will have served a total of five years, his contract was set to expire in 2027.

“After much prayer and reflection, I have discerned that this is the time for me to shift my focus and energy to my personal and familial journey, and away from our shared institutional endeavors,” Esteban said at the time.

An introduction ceremony and reception at Cortelyou Commons followed the announcement. President-Elect Manuel answered questions from Board Chair Gerald Beeson and later held a press conference with student media.

“My job is to come here and find out what everybody wants to accomplish, what the possibilities are, and then figure out how to bring that to life,” Manuel said of his next steps. 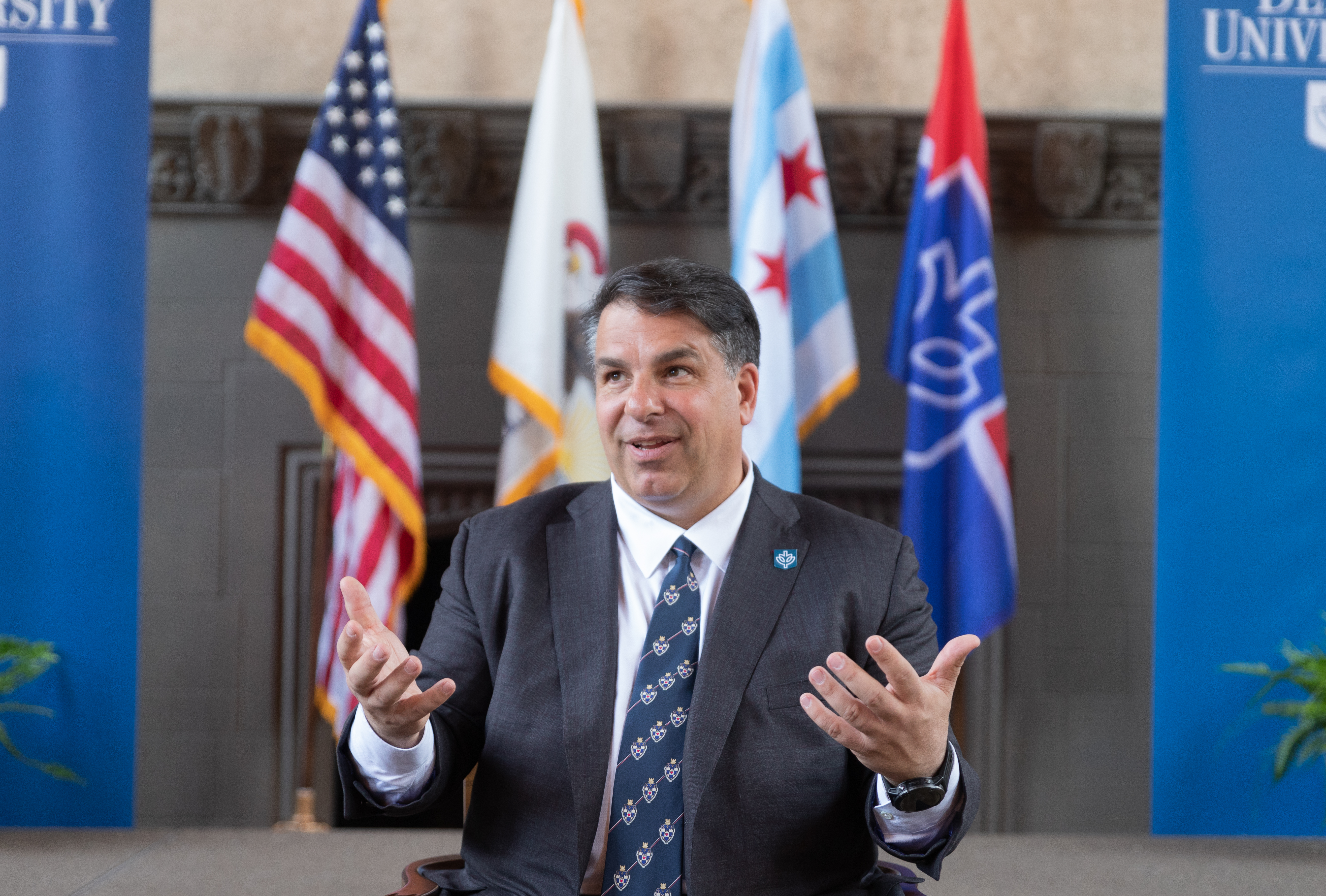 President-elect Robert Manuel speaks to members of student media after the announcement on May 10. Photo by Emily Soto, 14 East

Judy Greffin – the chair of the Presidential Search Committee, who also serves as the vice-chair of the Board of Trustees — cited Manuel’s experience and dedication to higher learning as reasons for his appointment.

“The opportunity to lead DePaul was attractive to many highly qualified and very impressive leaders. In this competitive field, Rob stood out as an accomplished, transformative leader,” Greffin said during his introduction.

After serving as president of the University of Indianapolis since 2012 — and numerous administrative positions at institutions across the country — Manuel will move to Chicago to begin his appointment on August 1.

To prepare, 14 East asked the president-elect to weigh in on some of the city’s popular debates. (Manuel is still deciding where he stands on the White Sox versus Cubs issue). 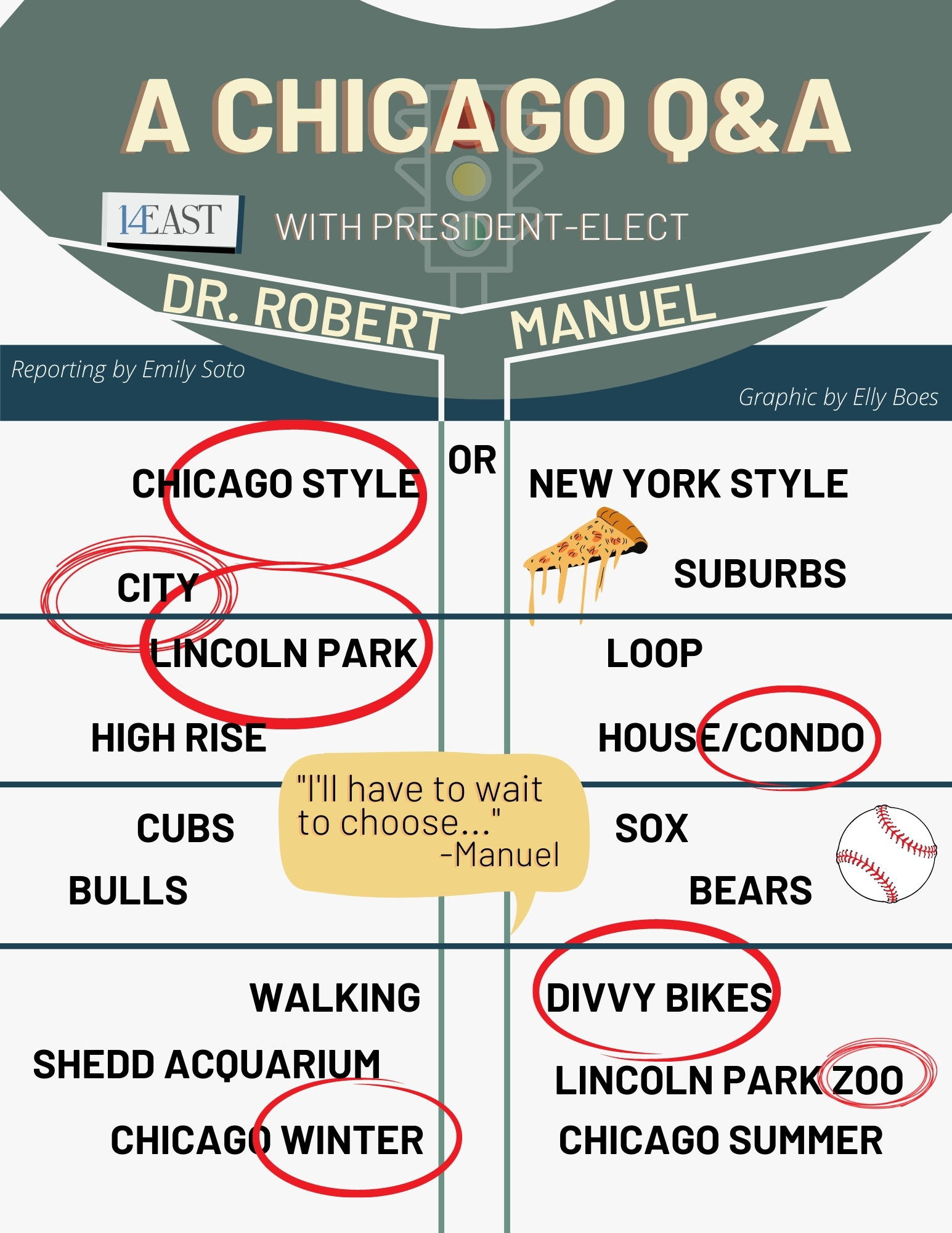 A Q&A with President-Elect Manuel. Graphic by Elly Boes, 14 East

However, the president-elect stressed the importance of understanding the DePaul community before implementing any new strategies.

Although Manuel didn’t share specific plans with reporters, he addressed questions on affordability, diversity, equity and inclusion as well as improved shared governance.

To foster relationships between administration and students, faculty and staff, the Massachusetts-native and father of three said his work at ‘UIndy’ includes hosting public town hall meetings four times a term and creating university planning and advising groups that meet regularly.

“I think that good presidents don’t bring things with them [or] assume that they have the answers for institutions,” he said. “I think what they do is they come and they find the solutions from the passions of people that have been here and the missions of those institutions.”

As a university president in Indianapolis, Manuel oversaw the construction of a new building for the school of engineering, the development of three new residence halls and the creation of the college’s first diversity, equity and inclusion office. He also said he serves on six boards outside of the university.

When asked about his engagement strategy, Manuel committed to attending university events in person and meeting students and faculty in their classrooms.

“I think of my job as being connected to the people, so I understand what the good, the bad and the ugly are in the experiences that we have,” he said.

When asked how he’d respond to a surge in COVID-19 cases, Manuel re-emphasized the need to get to know university committees and policies first.

“What I would do when I get here is, very quickly, engage the leaders in the area who’ve been working with everybody at DePaul to find what that path forward is.”

With the announcement of the president-elect now official, the DePaul community paid tribute to Esteban and his wife Josephine at a farewell celebration on May 11.

According to his farewell video, the university’s endowment grew to over $900 million during Esteban’s appointment.

However, the current president was also criticized by members of the Student Government Association and Faculty Council for violating shared governance policies and by The DePaulia for an overall lack of communication and transparency regarding policy-making decisions.

In the meantime, Manuel said he believes it will be his responsibility as president to maintain the quality of education at DePaul, while also ensuring it’s accessible to all populations.

“The idea that you have to find ways to keep affordability in mind, so that accessibility to higher education doesn’t preclude people from attending is critical,” he said. “One of the jobs of the college president is to find ways to raise money to create scholarship opportunities for students to come, and on the other side, to have dollars to invest in the educational experience so that you balance the two.”

When asked what he was most excited about coming to DePaul, President-Elect Manuel said, “There is unlimited possibility in what could happen here … the only thing that’s stopping us is the failure of the imagination.”