Lessons on Convivencia Through Memory

Every Memory Has Its Place

Lessons on Convivencia Through Memory

The meaning of memories for a mixed-status family.

This piece contains interactive audio that is integral to the story. Press play when directed.

On April 22 1992, my mom was living in her hometown, Guadalajara Jalisco, when she experienced the streets explode.

She was around 12. She began working straight out of middle school. She babysat and cleaned houses.

My mom was responsible for checking up on her boss’s house once a week while she was on Easter vacation. She had to water the plants and feed the fish.

On one of those days her cousin, Supi agreed to come with her.

On the day of, while they waited for the bus early in the morning, Supi changed her mind, “Sabes que wey? No tengo ganas de ir,” she said, explaining she just didn’t feel like going but didn’t know why.

Thinking back on that now my mom believes Supi had a premonition of what would happen later. However, my mom convinced her and so they were on their way.

My mom would usually play the radio while she worked. There was a station that would play music without interruptions around that hour of the day.

They got to the house and decided my mom would work downstairs while Supi cleaned upstairs so they could finish early.

They had just gotten started when they realized the radio was playing news instead of music. They turned their attention from their work and reacted at the same time.

“¿Ya escuchaste eso wey?” Supi exclaimed from the top of the stairs. They were saying that in certain sectors of the city there were explosions erupting from the ground and making their way through the city.

They listened attentively when suddenly the phone rings and it was her boss. “¿Ya escuchaste lo que están diciendo?” She tells her to leave immediately regardless of how much she had done, to simply turn off the light switch, lock everything and leave.

“Nos fuimos la Supi y yo en chinga.” They left right away. She recalls making it to the street: there was chaos all around. People warned not to go in certain directions saying that’s where the explosions were coming from. Others advised not to drink water, assuming it was contaminated because of the explosions.

The buses weren’t running and there weren’t any taxis stopping. The electricity had gone out in many sectors so they had no way of calling their family to let them know they were okay.

They walked for a while and eventually found safety at an aunt’s house. A week after, my mom visited her boss’s house with her mom and got a better look at what was left of many sectors’ streets.

I learned this about my mom this year not very long ago while riding next to her in the car one day. I looked it up and read more on it immediately afterward.

This made global news when it happened. Pemex, a state-owned petroleum, gas, and oil company and monopoly, was blamed for the explosions. However, government negligence at different levels was also at fault according to the attorney general’s investigation.

As a result of poor infrastructural oversight, there had been a leak into the sewage system which essentially led to the explosions. My mom recalls residents had complained about a strong gas odor days before the explosions.

This wasn’t Pemex’s first incident or lawsuit. Its first explosion was of a liquid petroleum gas tank farm in 1984 just outside of Mexico City. Its most recent one was in July 2021 on the Gulf of Mexico, it took at least 5 hours to extinguish.

I was surprised to learn about this story and even more so that I hadn’t heard it before. My mom says she often recalls this moment: the whole front half of houses and buildings had been destroyed and cars were flipped over, some buried under layers of rubble. Days after the incident volunteers gathered to dig bodies out of the ground.

It’s likely she had told this story before probably on a car ride with the family and I just hadn’t been paying attention. 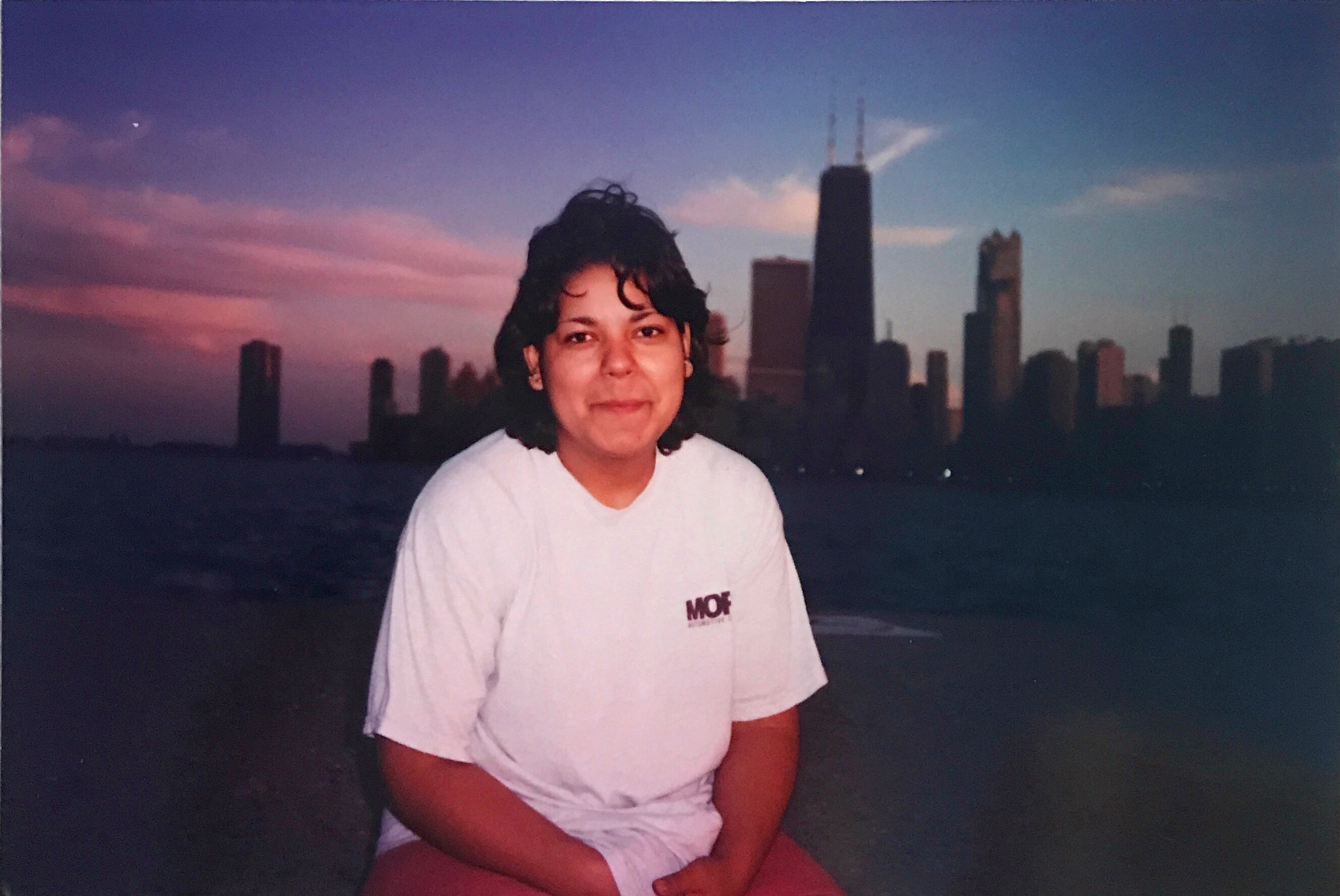 I grew up hearing my parents talk about their lives before settling down in Chicago. My mom has a very blunt way of speaking— she and my grandma did not shy away from using curse words at home.

My mom, Silvia, and her two older sisters, Alicia and Luisa, couldn’t afford to continue their education so they began to work at an early age. They would move around different family members’ houses.  She never had a physical place to call home.

My mom didn’t have the easiest childhood, but the memories she shares with us can be described in one word: Convivencia. In English, it translates to the word coexistence. But in Spanish, it has a different connotation; something more like community.

Even though my mom didn’t have a physical place to call home, her childhood was filled with memories of convivencia. 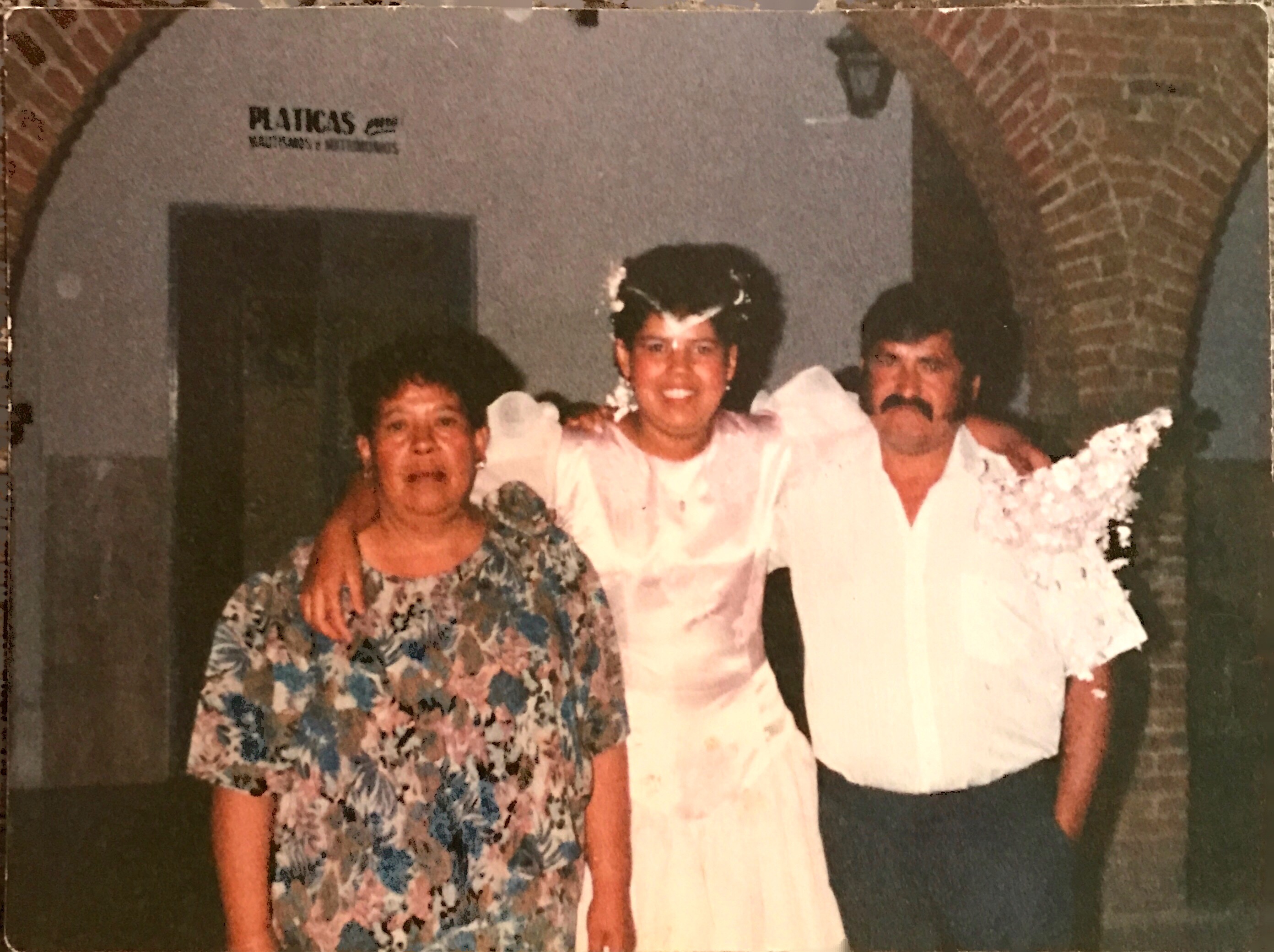 From left to right: Citlali’s grandmother Juana, her aunt Alicia, and grandfather Luis. Taken in San Jose Church in Guadalajara Jalisco on Alicia’s quinceañera. Circa 1990. Courtesy of Citlali Perez, 14 East

As a child, she would go to the ocean with her family every year. They planned a week-long stay at a small beach in the state of Colima with her extended family and people from the community. The large group and all their supplies would fill up a bus that would take them from Jalisco to Colima.

When they got there they set up a makeshift tent courtesy of her aunt who made it by sewing scraps of fabrics. The men collected sticks to hold the tent together. My mom says they had the biggest and most colorful tent on the shore.

At night each family would huddle inside the tent, while the young bachelors on the trip would sleep outside the tent on the sand. When they needed water to wash dishes or wash the salt off their bodies they would ask the nearby houses.

My mom remembers getting up each morning on that week-long trip and going to the water. She played with her sisters all day only coming to shore when their mom called them to eat and then going to the water again. Despite this, my mom says she never learned how to swim.

My grandmother Juana, had a lot of pictures from those trips. But one day my grandpa, who struggled with alcoholism throughout my mother’s childhood, got rid of all the family pictures during one of his alcoholic episodes for no apparent reason. 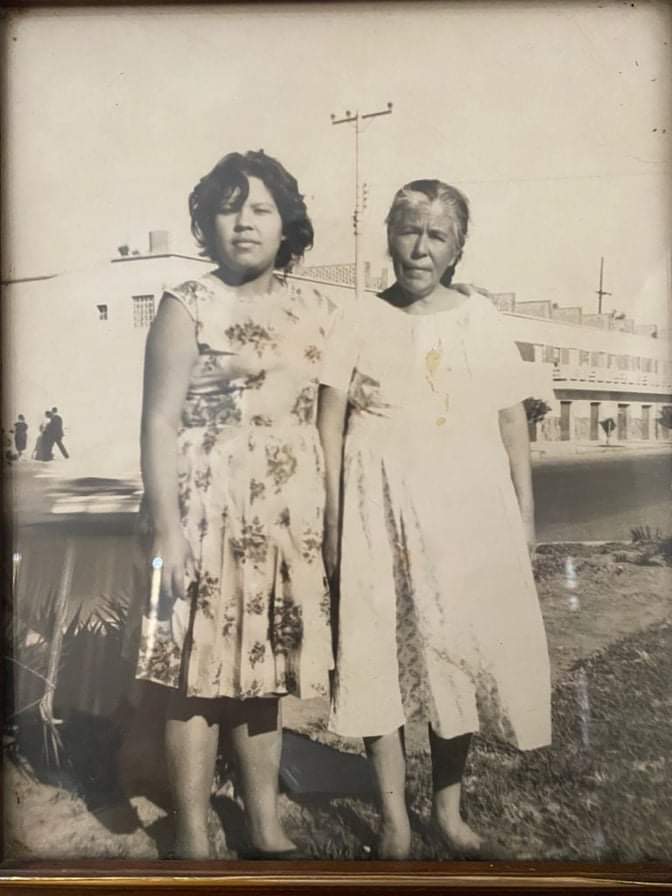 I remember hearing this growing up when I’d ask my mom if she had pictures of her childhood. To this day I wonder what she looked like as a kid. Although I recently got to see a picture of my grandmother as a young girl next to my great grandmother Luisa and that was very rewarding.

My older sister Stephanie got a hold of many never before seen family photos when she visited our family in Mexico in 2020 for the first time. She was also the first in our family to visit Mexico since my parents settled in Chicago 20 years ago.

My mom came to Chicago at the age of 18. With the intention to save up enough money to buy her mom a home in Mexico and send money to my older brother. When she got here she could barely afford to do laundry. Her plans also changed when she started dating my dad who she met upon arrival. 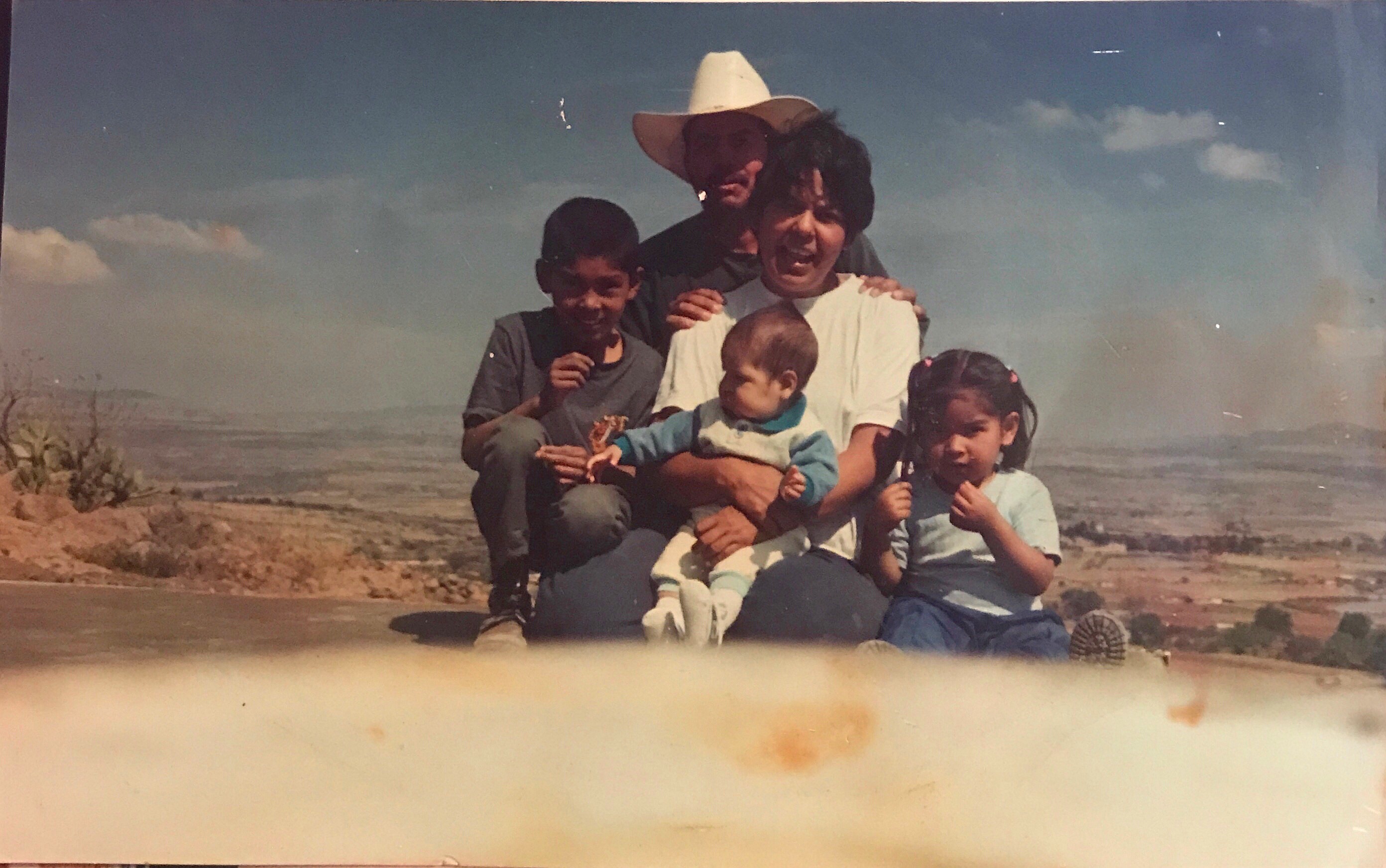 Citlali is in her mom’s arms with her brother (left) and sister(right) on either side and her dad behind them. 2001, taken with her dad’s camera in Coroneo Guanajuato. Courtesy of Citlali Perez, 14 East

After they got married and had my oldest sister Stephanie, they moved back to Mexico in 1999. They had the full intention to stay in Mexico which is why in 2001 I was born on a rainy July day in a clinic near my dad’s ranch in Coroneo, Guanajuato.

Now, whenever we meet extended family I am distinguished from my five sisters as the one who was born in Mexico. 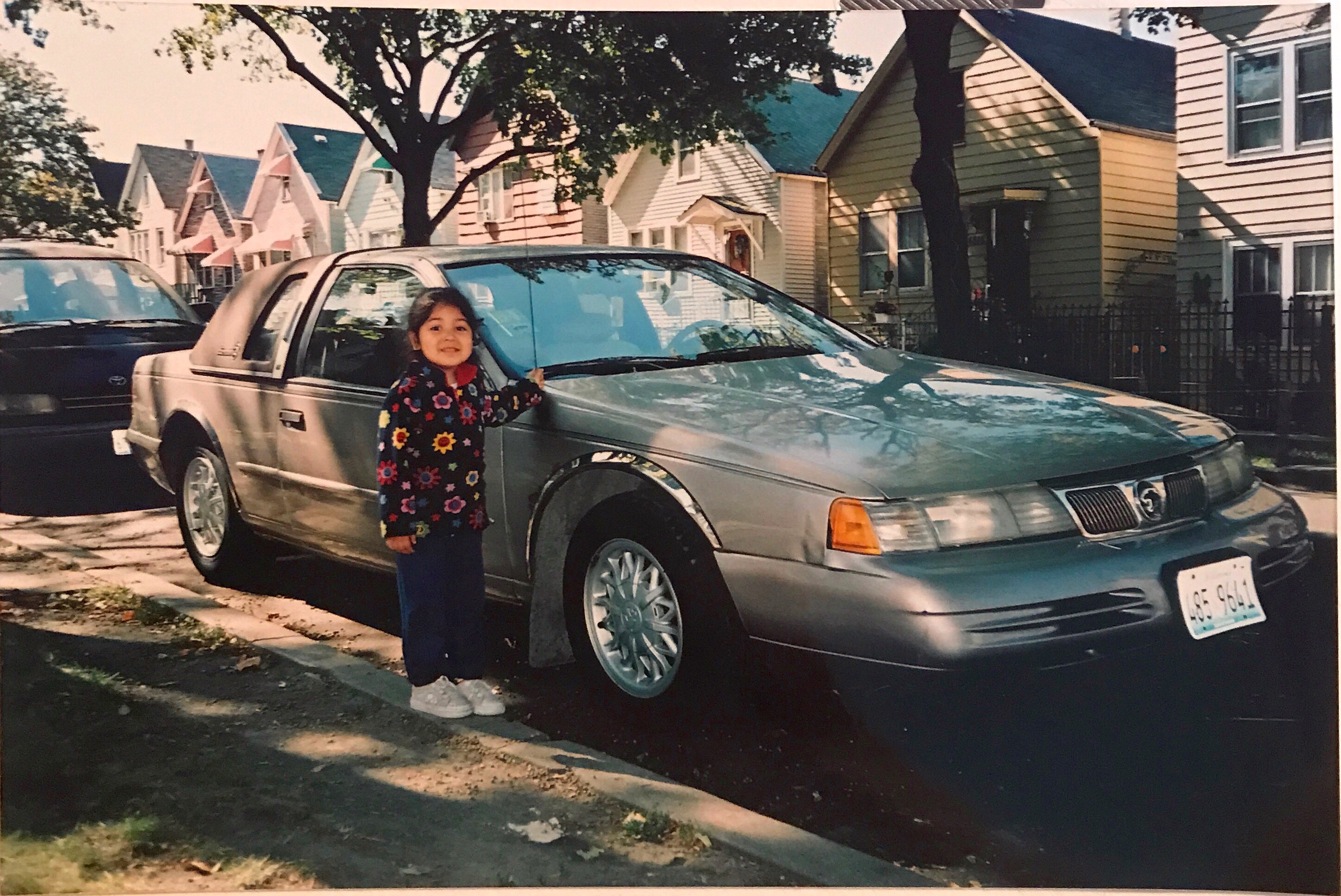 Citlali outside of her childhood house on Seeley and 48th street in Back of the Yards next to her dad’s car. Picture taken by her dad circa 2004. Courtesy of Citlali Perez, 14 East

They came to Chicago in September 2002 with my siblings and me to Back of the Yards, the same neighborhood where they first met and where they already had family and a sense of convivencia.

My parents had a goal of saving up to build a house on my dad’s ranch in Mexico however two decades later those dreams haven’t been realized.

Growing up we relied on long-distance calls to family in Mexico. This is how I met my maternal and paternal grandmothers before they passed away later on. 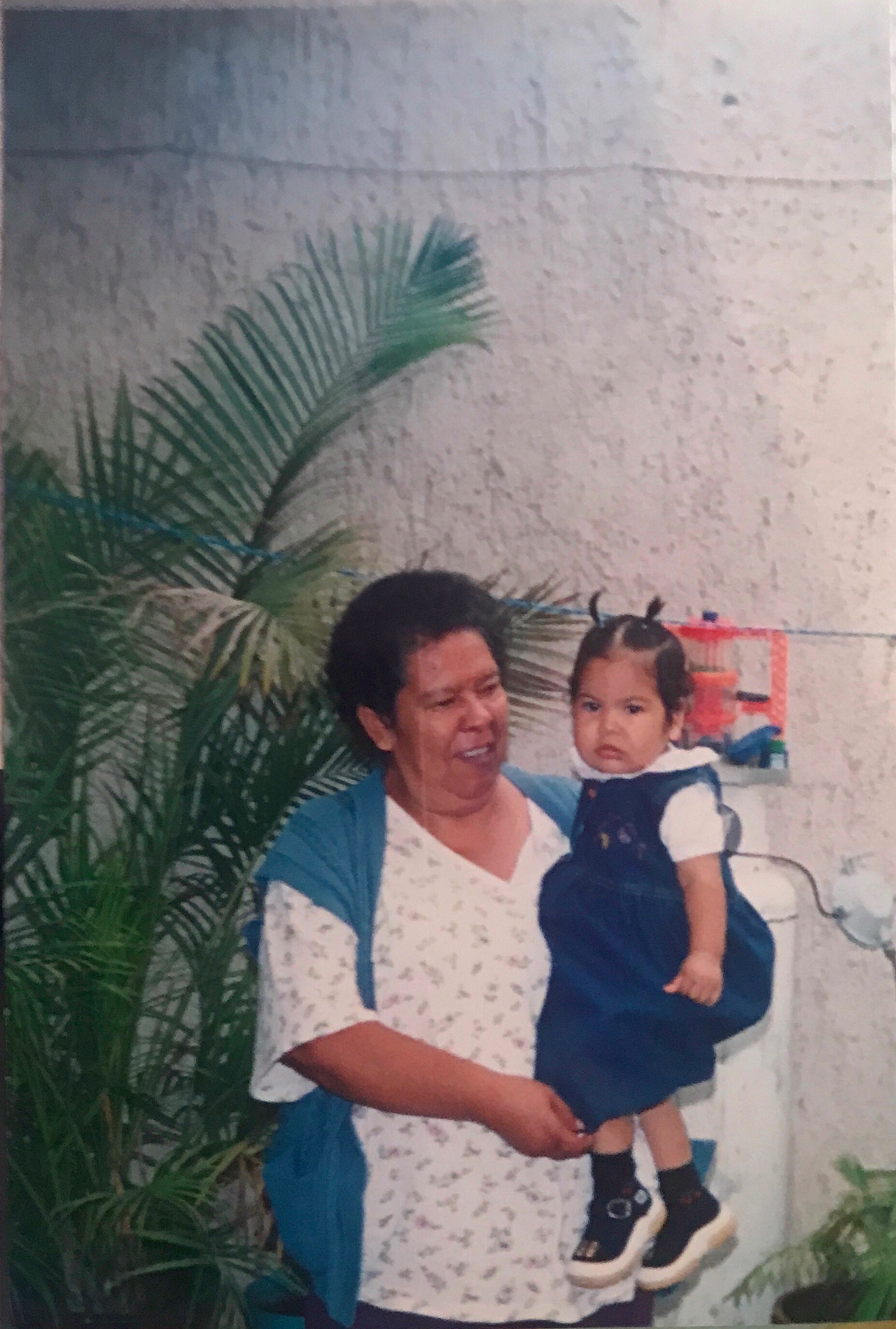 Citlali in her grandma’s arms, taken by her mom in Guadalajara Mexico in 2002. Courtesy of Citlali Perez, 14 East

My grandma Juana would always ask when we’d come to visit her, my mom would laugh in response which signaled to me it was only a rhetorical question.

Seeing my parents mourn long-distance after my grandparents passed, made their sacrifices even clearer for me.

My parents miss their homes very much but they believe moving here for my siblings and me was worth it. 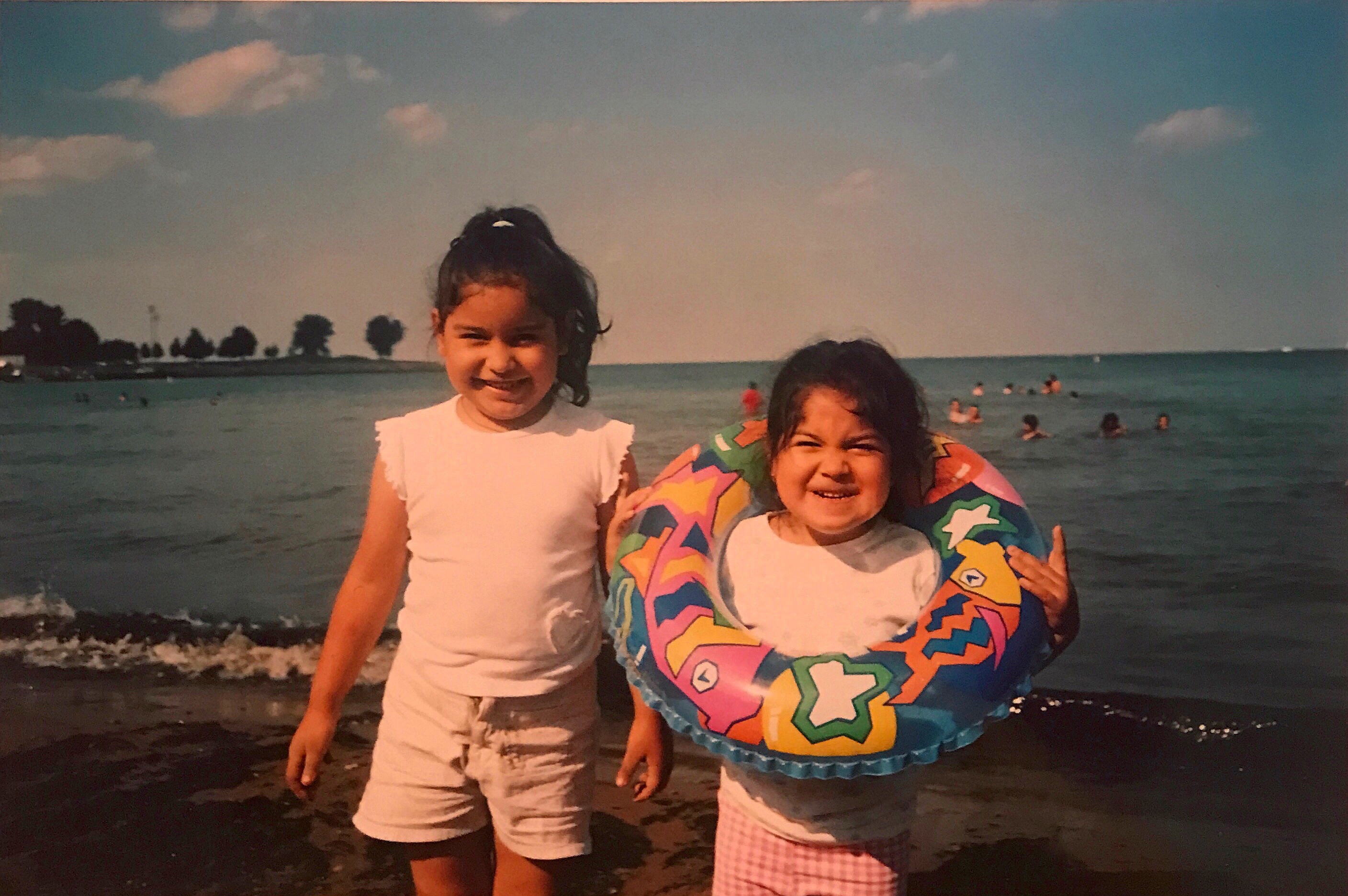 My parents didn’t get to accomplish any of the goals they set out when coming to the U.S. The hope was always to return to Mexico and build a home there.

Although they have lost hope (if there ever was any) that something will change policy-wise in the U.S. that would grant us permission to be here legally so we don’t have to choose between staying with our community here and visiting loved ones in Mexico, they are determined to go back one day.

In the meantime, even though living in the US as an undocumented immigrant can be very restricting and there is often this sense of not belonging I know Chicago is my home and I have my mom’s lessons on convivencia through memory.