Living With a Rare Skin Condition

Living With a Rare Skin Condition

I was born with an enlarged birthmark that now covers 30 percent of my body. My parents were terrified as nurses and doctors in the hospital room brought out textbooks to look up what the skin condition was called. The official medical term is Giant Congenital Melanocytic Nevus, and I cannot help feeling the weight that these words hold for my family and me to this day.

Giant Congenital Melanocytic Nevus is “visible pigmented (melanocytic) proliferations in the skin that are present at birth and are benign, tumor like malformations resulting from faulty development of pigment cell (melanocyte) precursors in the embryo.” In other words, Giant Congenital Nevus is an abnormally dark mole that is present from birth and contains pigment producing cells(melanocytes).

Being born with Giant Congenital Melanocytic Nevus, there were many concerns about my physical health. Children who are born with this much nevi covering their body are at high risk for both melanoma and neurocutaneous melanosis,which can cause serious neurological problems.

These risks worried me and my parents. My dad was the first person I sat down with to take a trip down memory lane, backtracking to his concerns and worries during this scary time as a parent.

“My main concerns would first have had to be your physical being and your health. Would it be a physical thing that would challenge you as far as emotionally? Having a physical problem would it affect your-self-esteem?” he asked.

He expressed how worried he was for the first five years of my childhood because of the chance that cancerous cells could still develop on the brain tissue.

After being diagnosed as a baby, my first couple of doctor’s visits were in San Francisco. My parents flew me out from San Diego to see a specialist who could do a full skin biopsy that would check for cancer cells along with an MRI of my brain because the nevus had crossed over the spine. 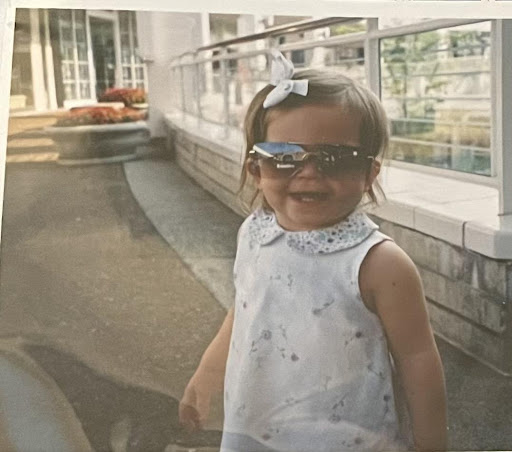 My parents were in full panic mode and still figuring out next steps to make sure I would be able to live a happy and healthy life. This is when my Uncle Kenneth found Dr. Frank Vicari who was located in Chicago.

Dr. Vicari is a pediatric plastic surgeon now located in Park Ridge, Illinois, and who performed 22 of my 23 surgeries from when I was six months old to nine years of age at Lurie Children’s Hospital in Chicago. 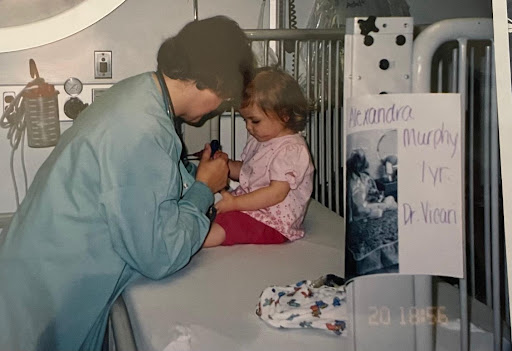 Nurse Marianne takes care of Alexandra in the hospital room before one of her surgeries. She was Alexandra’s favorite nurse when she was growing up. Photo courtesy of Alexandra Murphy, 14 East

My dad and mom explained to me their decision-making process for surgery being the best possible treatment and when the surgeries would take place.

From my dad’s personal perspective, the main reason for having surgeries was to take away as much of the birthmark as possible to reduce the cancer risk in a way that wouldn’t be as rushed or harmful.

My parents came to the agreement of taking the longer route of having tissue expanders instead of skin grafts. Although this would be a longer process, it wouldn’t be as taxing on my skin. Tissue expanders, which are large balloons placed underneath the skin, are one of the most effective forms of treatment for giant nevus. It develops more skin or tissue from the area of the birthmark being removed. 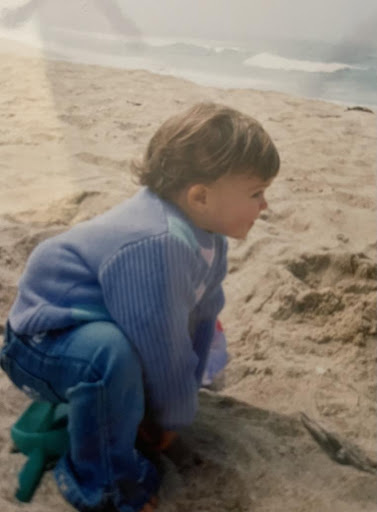 Alexandra plays at the beach in California while she had tissue expanders in her back. Photo courtesy of Alexandra Murphy, 14 East

My mom shared this similar experience with my father. However, hers is somewhat different because she had carried me in the womb for nine months. This skin condition brought about many worries for her as well as she recounted the day I was born.

My mom saw the surgeries as a necessary step as soon as she stepped into Dr. Vicari’s office for the first time. He talked my parents through how beneficial it would be for my health, mainly because of the physical risks of melanoma, but also to protect my own psychological health in the long run.

“We met Dr. Vicari at Children’s Memorial and we had a sit down in his office and he showed us some patients that he had before, before and after stuff. He let us know that it is going to be a long road because the surgeries we are talking about are not always successful,” she said.

Although I maintain little to no recollection of the beginning period of my surgeries, it becomes clearer with time how they had a major impact on my parents’ individual lives and my own life today. I would be a completely different person if it wasn’t for the many difficult decisions and experiences that had to take place. 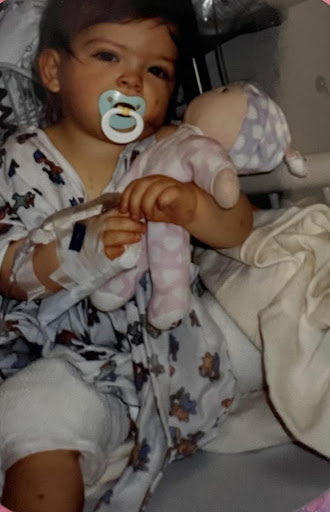 Alexandra sits in the hospital after one of her surgeries at Children’s Memorial Hospital in Chicago. Photo courtesy of Alexandra Murphy, 14 East

My grandmother was also a major source of comfort for my parents through this difficult time, as she agreed to care for my twin sister when I was gone with my parents in Chicago.

My grandmother gave me a baby blanket that gave me a lot of comfort while I was away from my sister for long periods of time.

I slept with this blanket from the day I was born until the eighth grade. Originally, I held on to it to help comfort me while I spent countless nights in the hospital. Over time, it helped ease the anxiety that was still present a while after I was done having the surgeries.

The blanket eventually turned into a miniscule piece of fabric by the time I turned six because of how many times it had been washed. My grandma saved it and sewed the pieces of the original blanket onto another piece of fabric so that it had a sturdy surface once again.

This “rescue mission” only took about a day. However, I was adamant to stay the night at my grandmother’s house while the blanket was being sewn. 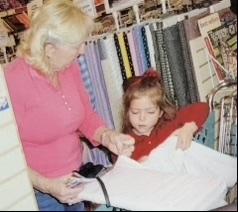 Alexandra and her grandma pick out new fabric to fix her baby blanket at Joann Fabrics. The blanket was originally made by her grandmother but needed some repairs after the constant use. Photo courtesy of Alexandra Murphy, 14 East 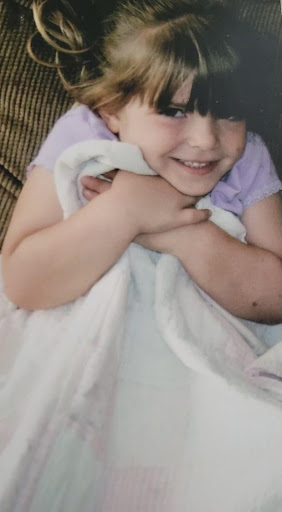 Alexandra hugs her blanket after her grandma fixed it. It was her favorite blanket that helped ease her anxiety. Photo courtesy of Alexandra Murphy

I grew up with only one sibling, my twin sister, Grace. She was not born with Giant Congenital Melanocytic Nevus.

Growing up with a twin who can experience all of the things you wish you could experience in life was extremely difficult as a child, especially because I didn’t quite understand why and how I was born with this skin condition.

My sister was also impacted heavily by what I was born with. Not only would she stay with my grandmother for long periods of time, but my parents felt a need to protect me during my childhood from feeling bad about my condition, and this sadly meant holding my sister accountable for many things.

When my sister and I were younger, we went on many weeklong cruise vacations with family, which were usually to the Caribbean. When going to the beach, my mom always made sure to put me in a swimsuit that would cover the majority of my mole and protect me from the sun. I can’t help but think back to this time when I felt so carefree about how I looked in a swimsuit without any self-awareness that others could be looking. 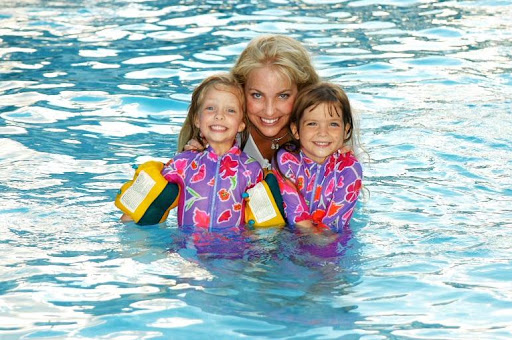 Alexandra swims at the pool with her mom and sister. She needed to wear a swimsuit that would protect her skin from the sun and her sister would be dressed the same. Photo courtesy of Alexandra Murphy, 14 East

My dad always made sure that Grace was also wearing a swimsuit or rash guard in order to protect me from feeling like I was different from others. After speaking with my sister about this specific memory, I could hear how confused she must have been by this at that time.

My sister was the person who knew the most about how much this condition affected me into my high school years, mainly because she had always had it engrained in her that she needed to protect me from it.

Even years after my dad stopped telling her to be a protective sister to me, she made my lunches in the morning in high school when my depression was so severe that I didn’t want to get out of bed or she would try to mediate situations when my mom and I would butt heads.

In a large sense, she was a caretaker for me when she shouldn’t have had to have the responsibility. However, listening to her talk to me about this for the first time it seemed that she didn’t mind as much as I thought.

“Now we are at the age of 21 and I wouldn’t know life any different,” she said. “I can’t even tell you what I really think the major impacts and differences would be because I’ve never lived without you having nevus .”

The first time I noticed that I was different from other children was when I entered middle school. There was a shift in the way kids cared about the smallest things in middle school, and it became a huge concern of mine that if anyone found out about my condition that I would be harshly ridiculed.

This was not the case, of course, because I hid my condition from even my closest friends and went to Catholic school which made it extremely easy to cover it up when everyone had to wear a uniform.

This anxiety led to depression going into high school and worsened even when I was still in a Catholic school environment. The school was larger than what I was used to, and I still felt extremely self-conscious of my skin.

I started therapy in my sophomore year of high school to change my mindset surrounding my condition. One of the main forms of therapy I went through was exposure therapy. I used to not wear jeans or leggings over the fear of how my legs looked from surgery. As a result, one of my therapists had me wear just that to help me become more comfortable in my own skin.

Therapy helped me find the confidence in who I was and changed my negative thought process surrounding my skin. Although I do not regret the decision to go through years of immense therapy, I would be in denial if I said this was the end all be all.

There are still some obstacles that I continue to face today. There are bathing suits I won’t wear, people I still struggle to open up to and dermatology appointments that I am hesitant to go to.

After coming forward and telling more of my friends about my condition, I began to realize how accepting they were and how much I cared about what I looked like more than anyone else did.

The concrete change that shifted the way I viewed my condition in a new light was recognizing friends’ and family members’ love and support for me while also coming to terms with what I can and can’t change.

I can’t change the fact that I was born with Giant Congenital Melanocytic Nevus. But I do have the power to change what I do with this information. It took years of choosing acceptance of the cards that I had been dealt to finally sit comfortably with who I am.