Keeping the Blues Alive for Ov.. 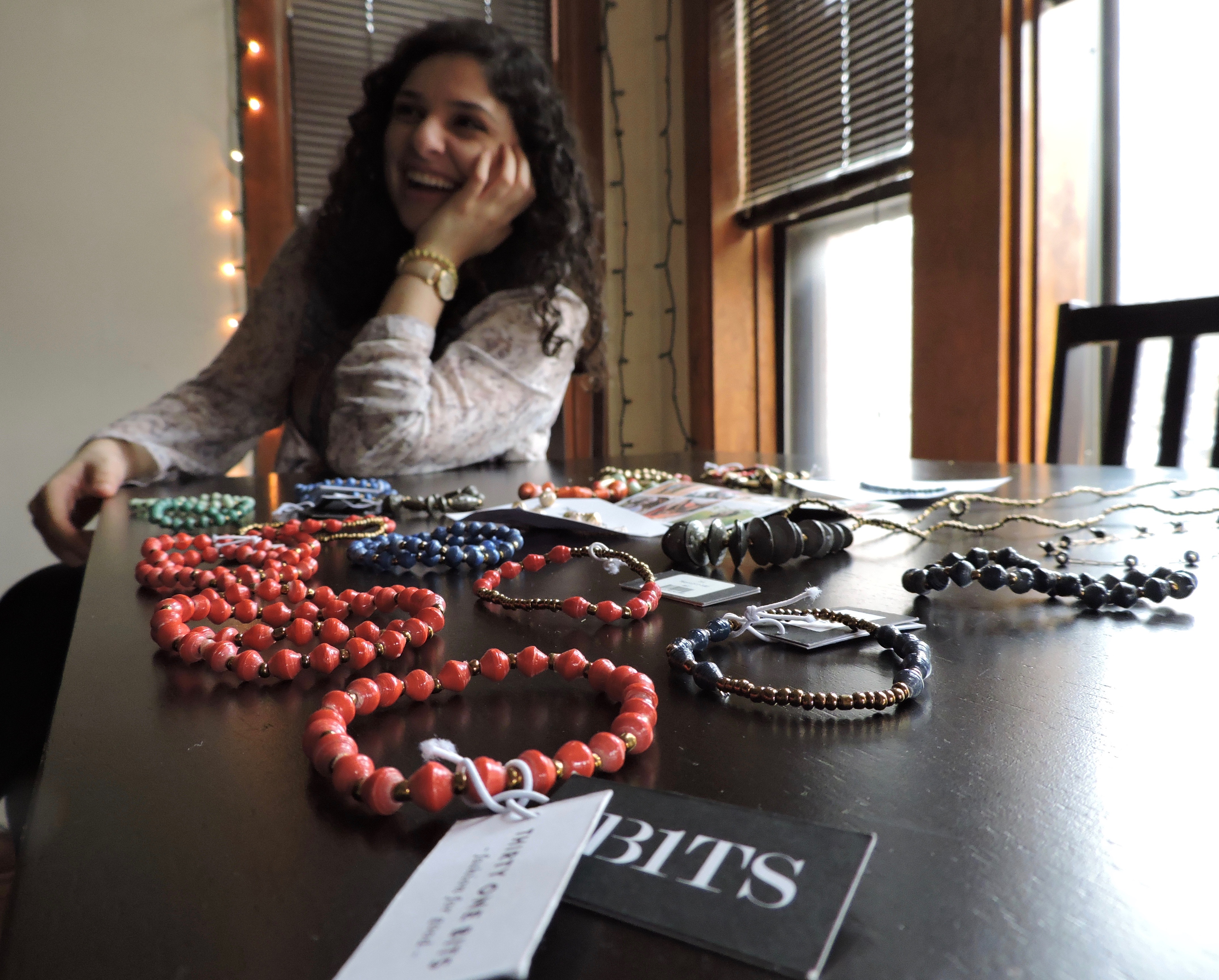 Alli Swanson and her four best friends from Vanguard University went to Uganda to sit in a circle and chitchat with some of the women there.

Hope was one of the women, cradling two babies in her arms and so aged she looked like she had been in her late 20s or early 30s. She told Swanson all about her kids, husband and the hardships she faced on a daily basis. After learning about Hope’s life experiences, Swanson then asked her age. She was shocked to learn Hope was actually 21, the same age as herself.

“That really hit home for me,” Swanson said.

Swanson and her friends had such an eye-opening experience traveling to Uganda that they decided they needed to do something to help the women there like Hope rise above poverty. They wanted Ugandan women to have more opportunities, which they would only be able to receive with two things: empowerment and an education.

To give the women this, Swanson and her friends founded 31 Bits in 2008, a jewelry company that makes all of its products out of recycled material from Ugandan supplies and is made by the very women they wanted to help. Each time someone buys a piece of jewelry, part of the proceeds goes towards an education, healthcare and counseling for the women in Uganda that make the pieces.

When 31 Bits was first founded, Swanson and her friends took the women’s jewelry to the States and sold it as a hobby, never realizing just how popular the products would become.

Then they encountered a problem; Swanson and her friends were only college juniors. They didn’t know how to run a business. That didn’t stop them from keeping a positive mindset, though. When they didn’t know the answer to something, they weren’t afraid to ask for help.

Even now with the success 31 Bits has had, they still continue to teach themselves new things. They do everything based on trial and error because it will only help them to succeed.

“I think we still learn from other organizations and learn from other people who are in similar fields as us,” Swanson said. “The second we stop learning, we’re in trouble. So, we’re always figuring it out.”

One of the things 31 Bits has learned is to use college representatives to help sell their products. When Swanson was in college, she was a college representative for Toms, a shoe company that “will match every purchase with a new pair of shoes for a child in need,” as stated by the company’s website. She had such a positive experience that allowed her to meet other innovative college students from all over the country, so Swanson decided it would be a great way for 31 Bits to help college students, too.

Since Swanson and her friends started their business in college, they felt they could also relate to the students that would work for them.

“It was something that was kind of like a no-brainer for us,” Swanson said. “We have a heart for college students. Sometimes we still feel like we’re in college.”

At DePaul, junior Bella Fioretto is the 31 Bits college representative. Part of the reason she decided to take on the role this February was because she is an education major and understands just how important it is for women in Africa to be empowered and have access to an education.

It is also exactly why Fioretto believes 31 Bits is set apart from so many other charities and companies.

“It’s great for the environment, but it’s also connecting people from two parts of the world and bettering the lives of people in Uganda,” Fioretto said. “As consumers you’re directly impacting a woman’s life, whether that’s providing a job or providing her with an education. I believe if one person is educated, that one person can change the world.”

Fioretto first heard about 31 Bits through her friend Paige Sammarco. Sammarco was the 31 Bits college representative at Indiana University-Bloomington, but she is studying abroad this semester and had to take a break from it.

However, she was really excited when Fioretto told her she was applying to be a campus representative because Sammarco had such a great experience, and knew Fioretto would love it too.

Sammarco became interested in 31 Bits because of actress Sophia Bush. Bush posted a photo of herself with the women in Uganda at the 31 Bits site and Sammarco fell in love with the company’s mission after learning more about it.

31 Bits’ mission is to “help empower women to rise above poverty.”

According to Paige Connaughton, empowering women is exactly what will create the necessary changes needed.

Connaughton lived in Kenya for four months, from August to November 2015, and she has also been in Africa two other times, but for trips that only lasted a few weeks when she was in high school. Her experiences have shown her that people cannot just come and do a short-term project and then leave because it does not provide the women in places like Kenya or Uganda with everything they need.

“By empowering girls themselves you can create way more change than we would ever be able to do by ourselves,” Connaughton said. “It’s focusing on the empowering aspect rather than just building a school and calling it a day or two. You’re only getting a snapshot of it.”

There have been many times where Connaughton has been frustrated seeing volunteers come and not fully try to understand what the women in Africa go through on a day-to-day basis.

“I think it’s really important to engage in service work and educate yourself but keeping in mind that what you’re doing is typically benefitting someone else,” Connaughton said. “You’re not doing it to take an Instagram of yourself with a cute little, black kid. That’s not what it’s about, but I’ve seen it so many times.”

When people only volunteer for a short time, Connaughton says it’s harder for people to fully grasp the totality of the hardships these women go through.

“When you spend any amount of time in a poverty-stricken area, in a developing country, you know when you’re in your car and you’re driving past these shanty houses and slums, you see it passing by your window and you’re shocked,” Connaughton said. “But you just keep driving and then when you are really spending time there, you see that this is every single day.”

When she saw Kenyan people living without a floor and instead on dirt every single day, that’s when it really hit Connaughton. It didn’t strike her right away that her peers would also be the ones in those types of homes, similar to Swanson’s first experience in Uganda.

“It’s really once you’ve been there for two weeks in, you’re like ‘Oh my gosh! All my friends that are 20 years old are living in these houses and that’s what the reality is,” Connaughton said.

This has never come as a surprise to DePaul assistant professor Stan Ilo. He knows the living conditions in Africa all too well. Ilo says despite women not attending school in Africa, there is even poverty within the schools when the boys attend. Ilo did not have doors or windows in any of his classrooms growing up in Nigeria, until he went to high school.

“I studied under a tree. That was our classroom,” Ilo said. “When it rained, we rejoiced because we had to go home. How can you teach when there are no doors and windows and water is coming in from everywhere?”

When it rained, that also meant people would be able to shower for the first time in a while. People in Ilo’s hometown did not have accessibility to showers in their homes. He would wash up in the stream near his home every day before going to school.

It is also because of the life he lived growing up that Ilo is even more thankful for what an education has been able to provide for him today.

Thus, Ilo believes there is only one clear, simple solution for Africa. It’s not just so the women there can both rise above poverty and have the opportunities Swanson and her friends had always wanted for them, but for the continent as a whole.

“In terms of education, it is something that has to be improved on not (just) for women,” Ilo said. “Education is the key for Africa.”