When Passion Collides with Culture

When Passion Collides with Culture 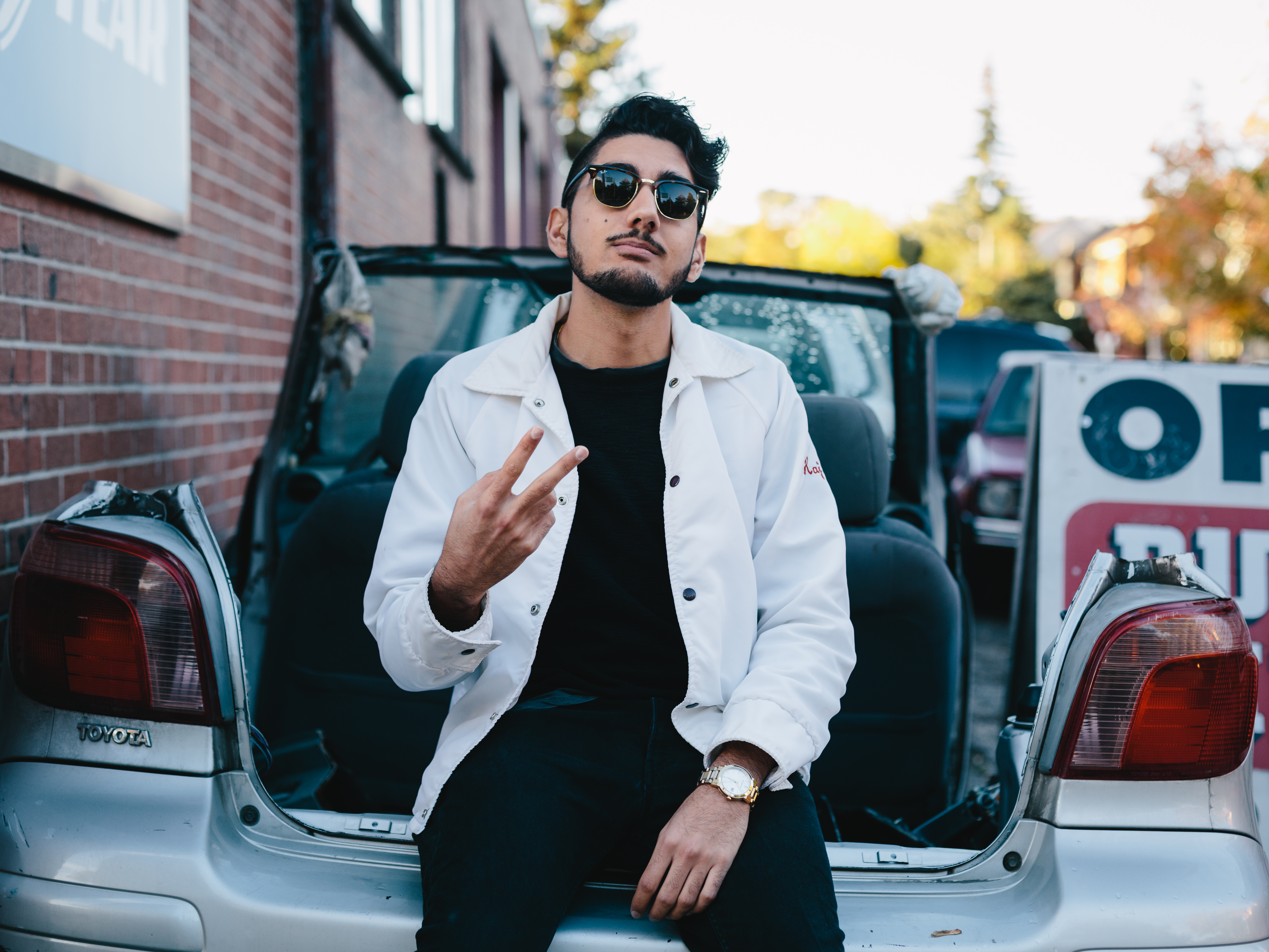 South Asian rappers balance hip-hop and everything else.

Raajan Aery sits in the basement of his parents’ house with his younger brother Neel in what used to be Aery’s bedroom. After the basement flooded from heavy rains, Aery’s bedroom turned into a music studio with concrete floors, red and white walls, topped off with a Canadian flag. A mass of equipment – a synthesizer, computer and microphone – takes up a big chunk of space in the room.

Aery, 22, is a music producer specializing in hip-hop genres (his work can be found on SoundCloud). Aery is a Punjabi man that was born in Ottawa, raised in Chicago and now lives in Toronto. The producer, who uses his last name as his musical identity, is one of the few South Asian musicians involved in North America’s hip-hop scene.

Aery started making music and songwriting when he was 13 years old, playing guitar and performing in a hardcore band. Near the end of high school, he started listening to new genres of music, one of them being hip-hop. During his time at the University of Toronto, he started listening to house music as well and felt his music tastes develop to a point where it was time to start making music again.

Some South Asian hip-hop musicians are confident in whether they do or do not want to pursue music seriously. While Aery has put some thought into it, he says he needs to balance other aspects of his life as well.

“I would like to do it for a long time, but how seriously I do it is dependent on a bunch of different factors,” Aery said. “I think I have a couple different passions and interests, and if music isn’t necessarily the most pragmatic one then I might not follow it.”

This is a common thought for artists in the hip-hop scene, since the competition is high and the likelihood that they’ll become widely known is low. Along with the steep competition comes a heavy commitment of time, money and effort. With Aery starting law school in Fall 2016, all three of those requirements seem impossible to fulfill.

“One thing I’ve learned with making music is that you have to ball out – you gotta go as hard as you can if you want to be successful at something,” Aery said. “Law school’s pretty hard, so if I’m in law school… it seems realistic to say that I would have to focus on that, and I’d probably only have breaks to really focus on music.”

As difficult as balancing life between the musical and academic sphere is, Aery needs to incorporate another factor that plays into his life: his racial identity.

Being the minority of all minorities

Being an Indian in the hip-hop community is somewhat of an identity crisis. Hip-hop and rap were created by the black community in order to express institutional oppression and racism, along with everyday struggles the community faces. Because of this, many minorities have moved towards this genre of music, applying it to the struggles in their lives. Along with the black community, other minorities like the Latinx, Jewish and East Asian communities have become attracted to the hip-hop scene.

Then there’s the South Asian community. The minority of the minority club. The most underrepresented group of marginalized people in a music genre specifically created for marginalized people. The problem with being an Indian who is involved with hip-hop is that your Indian community doesn’t really accept your music pursuits, and your hip-hop community doesn’t really accept your culture.

In the book “Hip Hop Desis,” Nitasha Tamar Sharma explains that South Asian-American hip-hop artists tend to gravitate towards rap because it gives them a “global race consciousness” in which the brown community feels like they can connect with the black community on racialized issues. She calls it a positive form of appropriation, where South Asian-Americans take the framework of hip-hop and incorporate their own identities, styles and social activism. Aery preferred to tweak this idea.

“I don’t think making hip-hop music is necessarily appropriation,” Aery said. “I think you have to be careful with your word choice, and what type of themes you’re talking about.

“If you’re trying to be a super serious – for lack of better terms – gangster rapper… if that’s not your reality and you’re just kind of doing it and saying all this crap, I think there’s a gray area there,” he said.

“Why I chose hip-hop probably has to do with my interest in grappling with racialized issues,” Aery said. “For me, it’s more meaningful if I make something that at least touches on that every once in a while or goes really in depth on it rather than something I can’t connect to.”

He tries to incorporate his racial identity into his music whenever he can, sometimes using samples that represent racial influence. Just the other day, he found himself sitting in his car when a couple of old Hindi songs came on over the radio. He decided he’d use that in a future track.

Milap Bhatt, a 27-year-old medical school graduate at Midwestern University, has a passion for rapping. Wearing a grey Chicago Bulls hoodie and a backwards cap, Bhatt adjusted his glasses as he got excited to discuss the success of his favorite rappers. While he’s been rapping since his junior year of college, his obsession with hip-hop blew up his freshman year. As new albums would come out, Bhatt and his friends would rush together to take a listen before anyone else they knew could. He also said he’s gone to a couple of open mic events, and attended performances ranging from small underground events to large concerts.

While Bhatt loves to write and record, it’s difficult to keep it going because of the money required to own the expensive equipment for good quality. Since Bhatt committed to medicine at a young age, he says that he didn’t take advantage of the resources available in his youth.

“I wish I went to high school maybe five years later, because now all these rappers that we’re in love with are like 18 to 21,” Bhatt said. “They were in high school, where they had all the free time in the world and they’re surrounded by the fact that creativity is a lot more accepted now to pursue.”

The amount of time that he gives to his rapping, however, is completely unknown to his family. Bhatt said the only song he’s ever showed them is a clean and appropriate song he made for a friend’s wedding. He says they support his love for music as a hobby, but only as a way to de-stress from things like medicine. They don’t pay much attention to it because they don’t think Bhatt gives much attention to it.

Bhatt said if he told his parents he’d want to make a career out of rapping, they “would flip out at some point.”

“I don’t think they’d believe me initially,” he said. “They know I love music, but that’s the extent of what they know.”

While Bhatt continues to pursue medicine, the idea of making a career out of hip-hop still lingers in his head.

As much as Indian hip-hop artists try and push into the rap scene, there is still a strong desire to maintain ties to their heritage. Many of the more popular Indian-American and Indian-Canadian rappers focus on their own themes and styles, but aren’t afraid to incorporate their South Asian culture in the mix. Some of the bigger names in South Asian-American/Canadian hip-hop artists include Hoodini, Fateh, Humble the Poet, producer 6ix and, the most widely known, Heems.

“Hoodini is great, shout out Hoodini,” Aery said, who produced the song “Burj Khalifa” with Grip Swami and Hoodini a year ago. “Heems is the number one Indian rapper though, he’s sick.”

Bhatt thinks otherwise, saying even successful Indian rappers were included for a very temporary time in the industry.

“Oh Heems – I mean, what does he do now?” Bhatt said. “He had his moment, but who knows. I don’t know if it’s the hip-hop community not accepting us, or that there’s just not enough representation and no one being good enough.”

Bhatt says if he were to make a mixtape, he’d want the theme to be about a first generation Indian in America. He’d want to create a subgenre of rap that first- and second-generation Indian youth can relate to, without feeling like they’re taking away someone else’s culture.

“I don’t have the struggles that most rappers on the radio rap about, but I do have this story of being a first-generation Indian, of dealing with parents who didn’t understand, going to school and having people there who didn’t understand… that feeling of being lost and confused,” Bhatt said. “I’d want to build something off of that.”

While Aery doesn’t necessarily think that one needs to make their entire hip-hop identity about their South Asian background, he does think it’s important to acknowledge that becoming a hip-hop artist does not erase one’s South Asian identity. On the contrary, he feels that Indian hip-hop artists that try to make it big often end up trying to hide their Indian identity and adapt to white norms to be more successful.

“Who’s that Indian singer that got popular in middle school, Jay Sean?” Aery said. “That guy totally whitewashed his image and his music, and, I don’t know, that’s kind of sad.” Aery also mentioned that when he had tweeted at producer 6ix, he’d complained that he doesn’t like when people think he is an Indian producer.

“Why don’t you use that to empower people that look up to you, instead of just trying to establish yourself as a producer?” Aery said. “No matter what, you’re both an Indian producer and a hip-hop producer. I think using it in a positive way is important and I think people should do it more, instead of trying to do this weird colorblind thing that I find very uncomfortable.”

Although both Aery and Bhatt have decided to keep music production and rapping a hobby for now, they both plan on continuing to exercise their love for hip-hop. Before he starts law school in the fall, Aery plans to release more tracks.

Bhatt has not released a track yet, but plans on doing so when he has access to higher quality equipment. Until then, he continues to songwrite and record his raps when he’s not preparing for residency. Bhatt’s family is supportive but still unaware of the level of priority he puts his raps at, and Aery’s family is supportive of (and some even involved in) his hip-hop production.

Header photo: Raajan Aery sits in half a car. Credit to Benjamin Lappalainen