The Sphere of Deviance

Riahi and the Written Word

In 5 Words or Less

Riahi and the Written Word 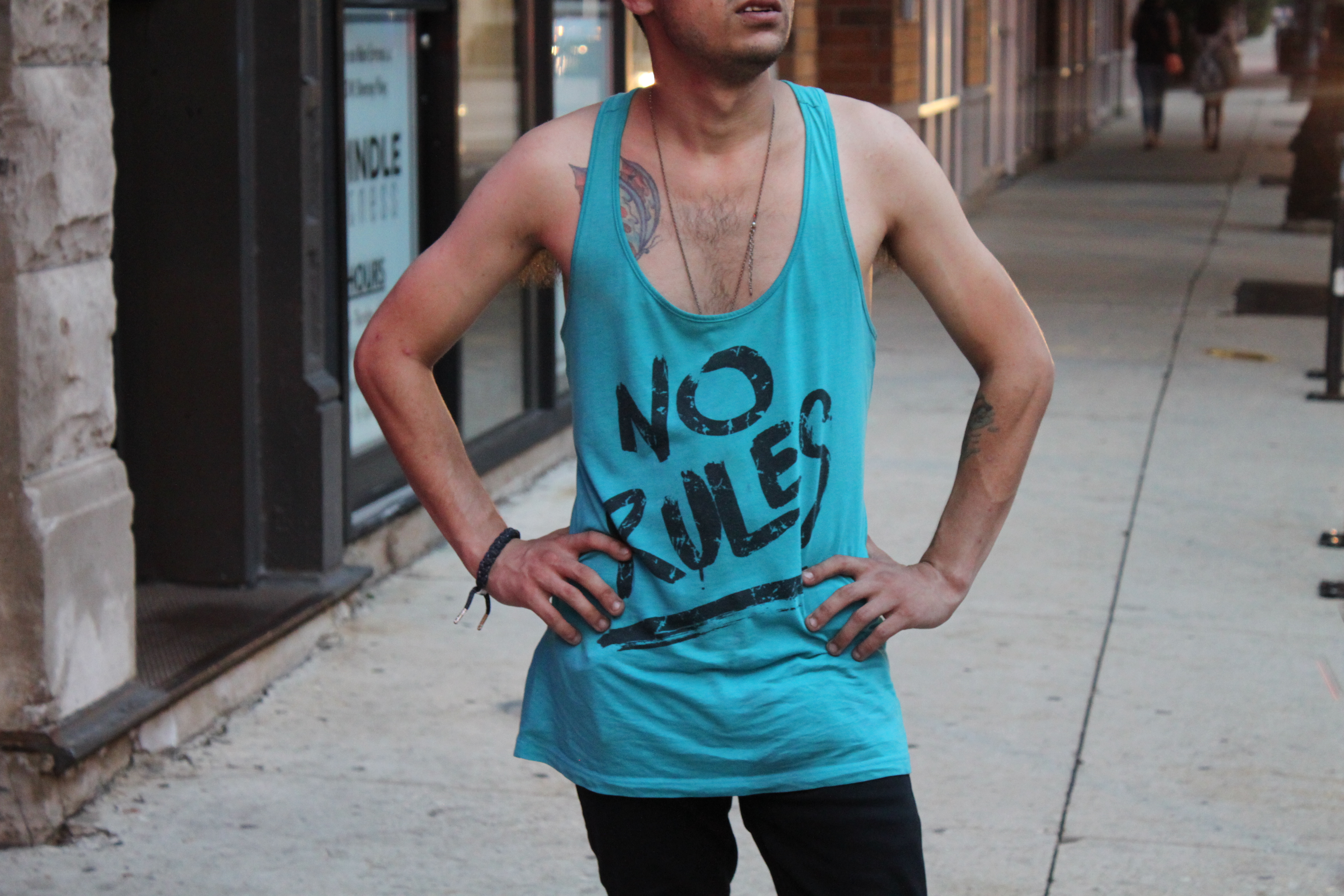 Behnam Riahi’s cornflower blue dress shirt pairs well with black pants and a vest. Rimless glasses rest on his face. A gray tie with white polka dots and wingtip shoes, the color of the iced coffee he is just finishing up, brings together a professional look.

Stepping out into the summer air, the 30-year-old creative writer makes his way from Osmium Coffee Bar to the artist’s loft where he resides. An oversized metal door, almost disguised to any passersby, provides entry to Riahi’s residence in Chicago’s Lakeview neighborhood. He lives with a few other creatives, mostly visual artists, in an unassuming brown corner building above a Japanese restaurant. 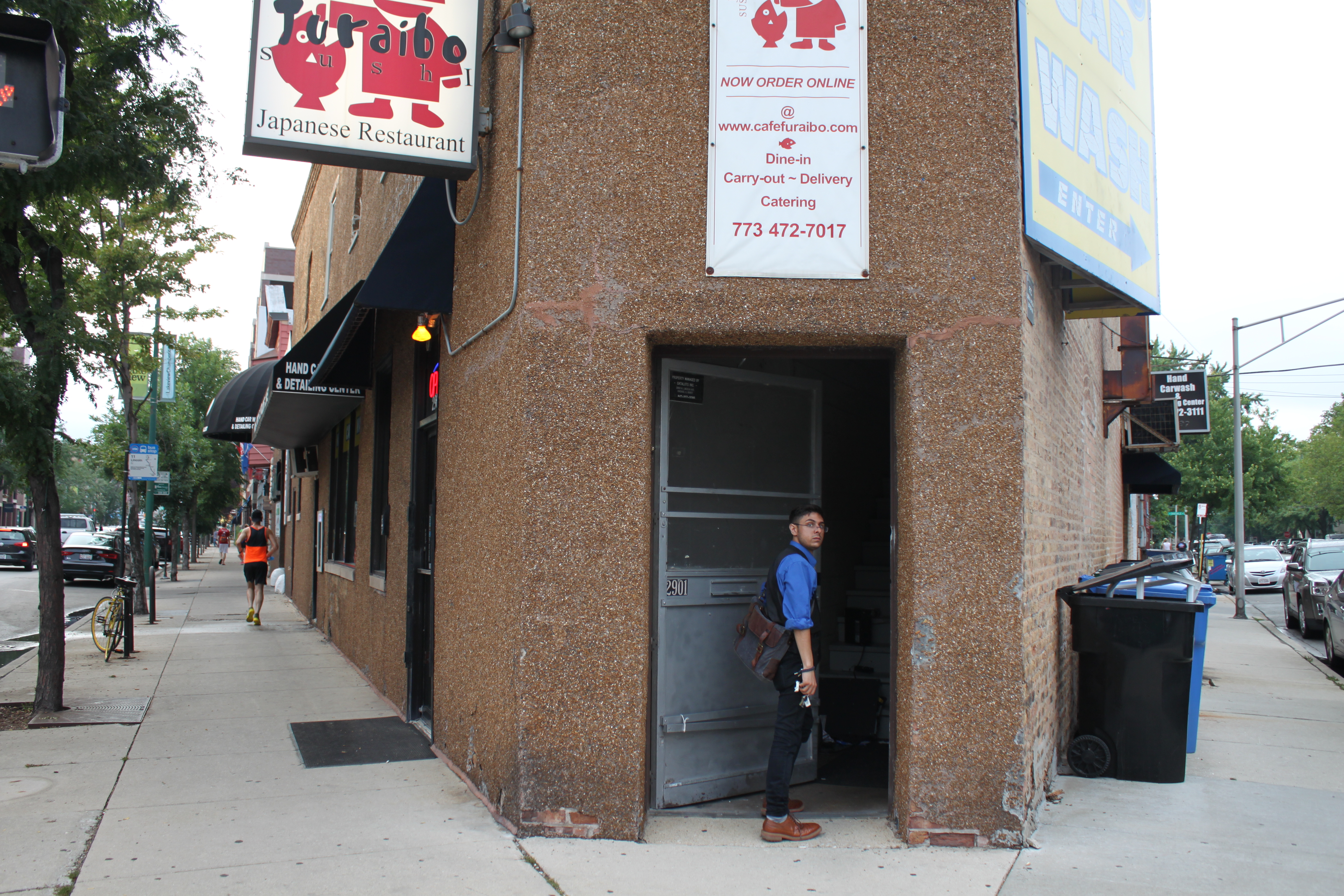 Riahi in front of his apartment (Sameerah Ahmad, 14 East Magazine)

Art is everywhere. Paintings and wall sculptures lay wait, as if longing to be seen by the world.

When Riahi is not writing, he works at a restaurant or is in class as a public relations and advertising graduate student at DePaul University. He keeps busy and appreciates the space and his roommates. “These people are non-binary. And they’re my kind of people. Ones and zeroes—binary means there are only two types of people. White and black, man and women, whatever is societally acceptable,” Riahi says.

Riahi identifies as a “creative” with the caveat that he is not a visual artist. Unlike his cohabitants, Riahi’s art lives in his small metallic laptop or written down in a journal.

In many ways, Riahi’s work spans beyond the written word. He occasionally reads his pieces aloud at writer gatherings. He used to run a reading series called “Reading Under the Influence” and was an editor at the Chicago Center for Literature and Photography. He has been a coordinator for Criminal Class Press and Windy City Story Slam. He’s even edited two books.

Riahi twists through the loft and stops in his bedroom to change from business attire to eggplant-hued sneakers and a turquoise tank that reads, “No Rules.” He passes through the shared living area and then heads up a set of stairs leading to a vast rooftop. 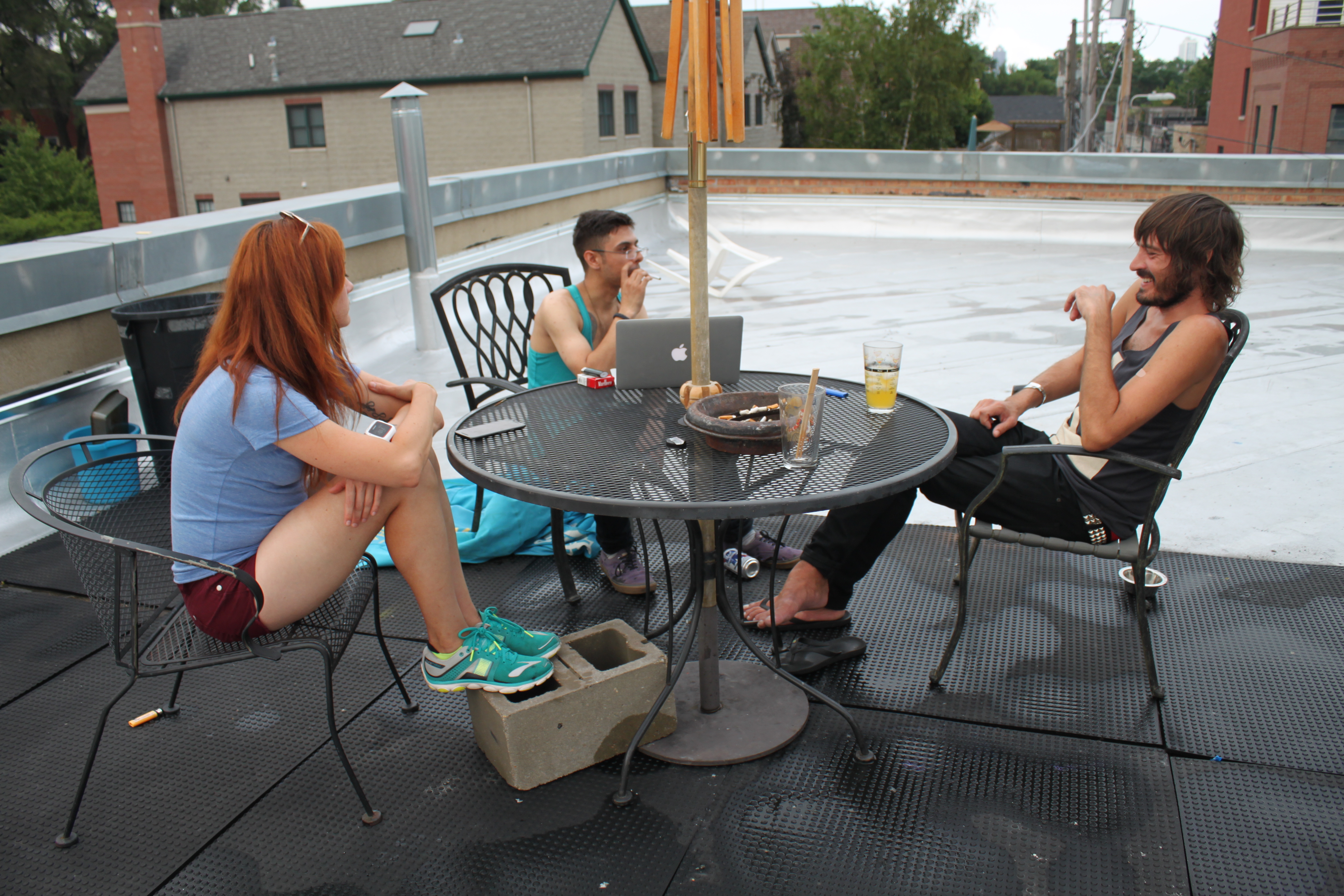 On top of the roof, Riahi and friends chat (Sameerah Ahmad, 14 East Magazine)

His roommate Ryan, a 33-year old painter, chats with a young auburn-haired woman. Riahi and Ryan smoke cigarettes and the trio eventually wade into a more philosophical conversation concerning biological theory on the aging of the brain and how it affects music appreciation over time.

Eventually the woman gives her goodbyes and Riahi and Ryan saunter back down under roof. Olivia, a smart 4-year-old with golden locks, attempts to balance chess pieces into a black and white tower. She’s the daughter of one of the artists who lives in the loft.  Riahi gently encourages her and patiently watches the child carefully stack the figures. 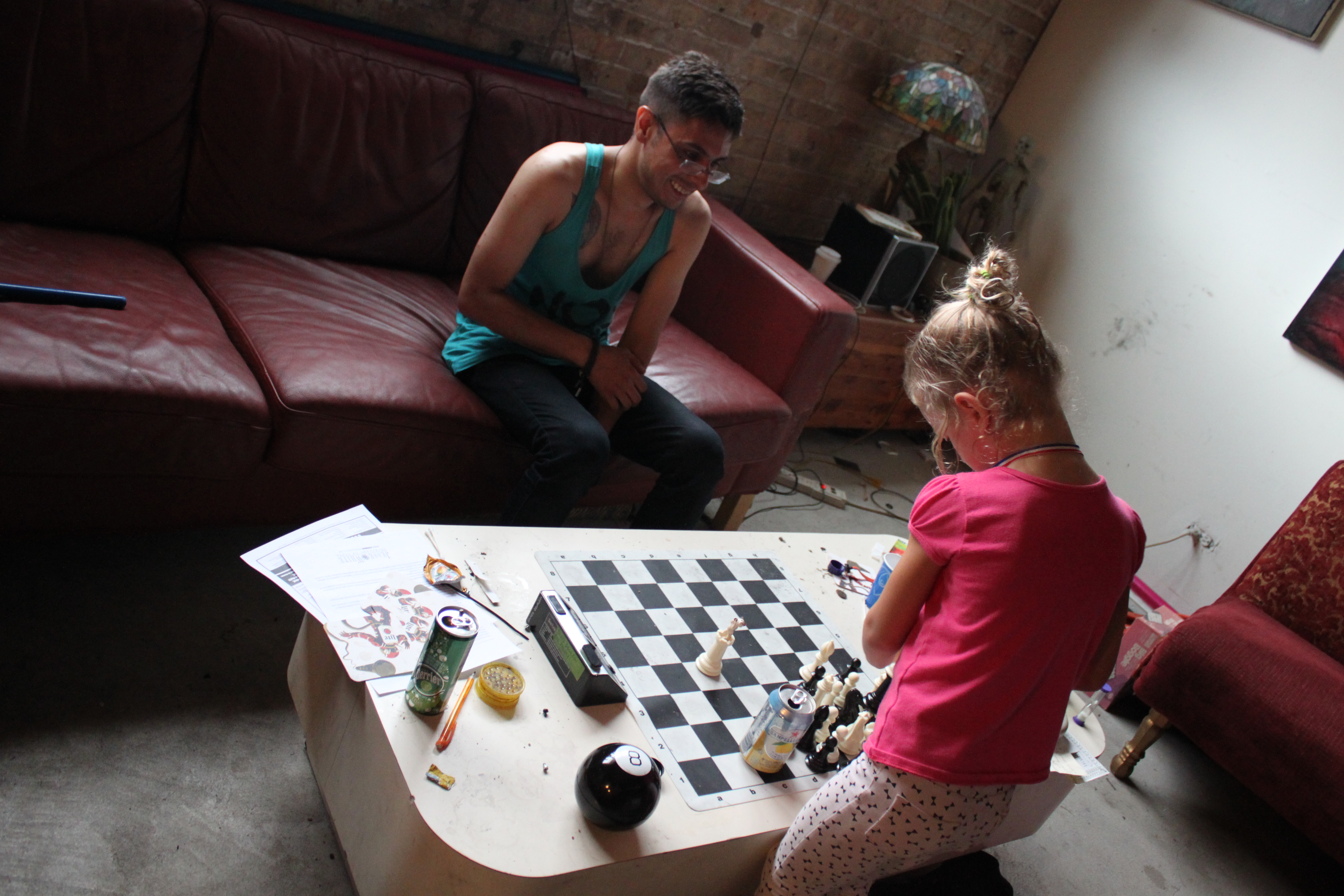 White rook. Black rook.  White rook. Olivia places a tiny figurine on top, a calico cat, who paws at the sky and crowns the whole structure. Olivia’s mother Sarah smiles and summons the young builder to a nearby grocery store.

Riahi challenges Ryan to a game of chess.

Ryan liberally pours vodka into a glass mixed with a fluorescent yellow energy drink. The men concentrate on the game and groove to the Velvet Underground. The artworks surrounding them patiently witnesses the match. Riahi points to a painting on the ground. Ryan made it. Riahi is seen in a tiled bathroom with a syringe in his mouth. His hand clutches the band that strangles his left arm. 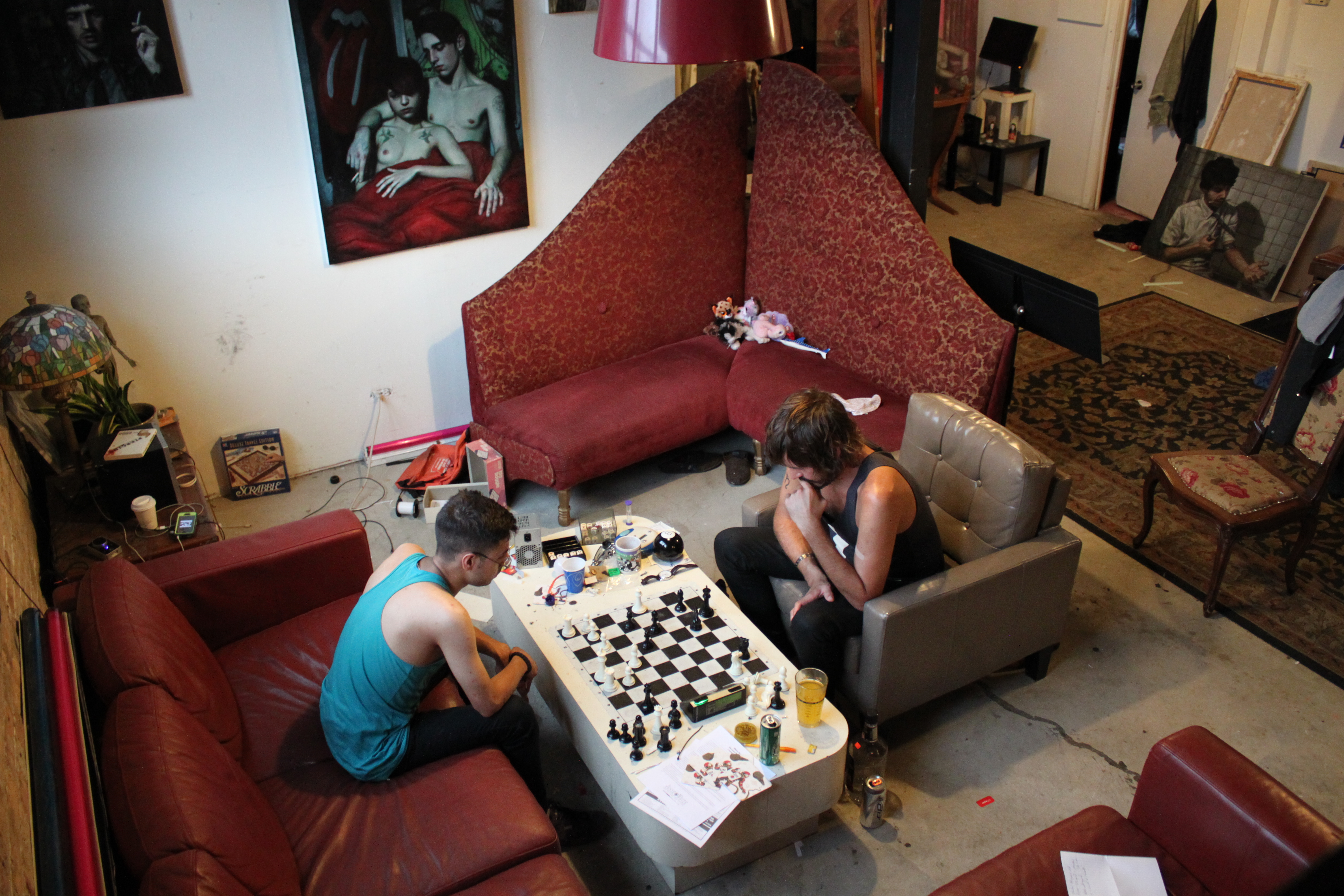 The roommates decide to head down the street to a tavern, but not before Ryan gulps down the rest of his drink. Delilah’s provides a dark, cool, and comfortable setting for this Thursday summer evening. Drinks arrive and the two strike up a conversation about masculinity and clothing choices. They both sport skinny jeans and loose tanks. 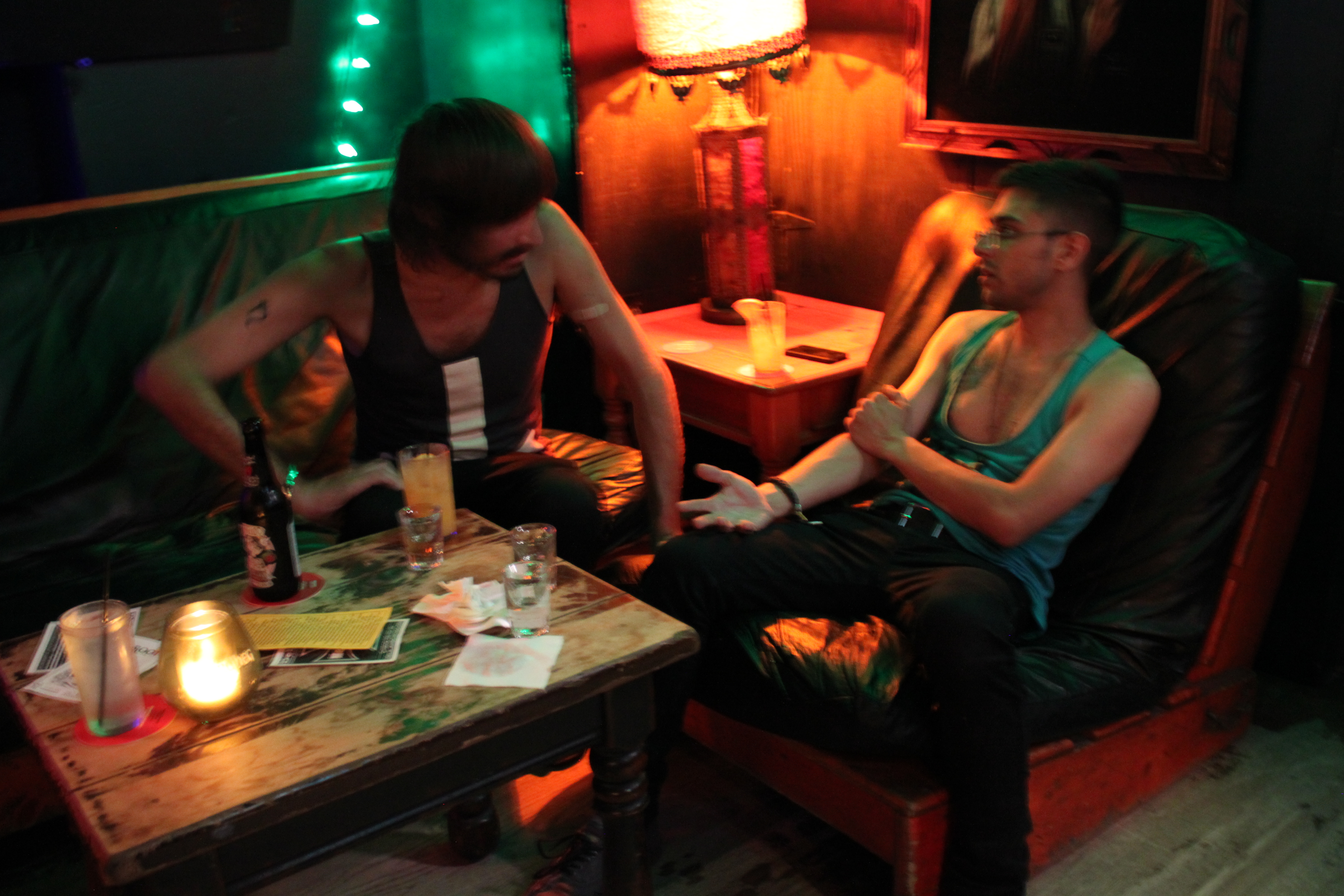 “There’s a new masculinity. You show you’re a man by not displaying your peacock feathers. You can feel like men dressed like f**s because you’re confident enough in your mental abilities. Without being like,” Ryan argues, his voice deepening. “‘I’m strong and I want to shoot people. I have a gun and f**k the brown people.’ You can just be a dude and girls find that highly attractive. Society has changed. We don’t live with a hunter gatherer mentality anymore.”

Riahi bristles at the “f” word.

“The way I dress is about feeling confident. If I don’t, I’ll feel vulnerable. It’s not about masculinity for me,” he says.

A conversation ensues about the flippant usage of the derogatory term. The two take opposing sides. Calculated statements are traded back and forth. It’s as if they are still in the loft sliding around queens and pawns.

Riahi and Ryan step outside for a cigarette. Ryan seems overtaken by the cocktails and sits on the ground. His long skinny legs sprawl across the concrete. Eventually Ryan heads home and Riahi walks to a nearby shop to purchase some cheap wine. On the stroll back to the loft he searches for monsters. Pokemon Go.

Back at home, Riahi drinks wine and converses with his roommate, another visual artist. Abdel’s website explains “much of his art is inspired by the intricate geometric patterns that blanket his Moroccan homeland whether through architecture, interior design, tapestry, or fashion.” At some point in the conversation Riahi mentions that he inherited a blouse from his deceased father. Abdel gently urges him to try it on.

Riahi emerges from his room wearing the intricate garment. Primary colors dance on the dense, sand-hued blouse. It fits him like a glove. There’s both pain and pride in his demeanor. Riahi’s father died in Shiraz, Iran on August 31, 1999.

“It’s beautiful,” Abdel says, “Excuse me but I’m going to be an Arab for a second.” He walks over and feels the fabric. It’s the real deal.

The details of Amir Riahi’s death are sensitive. A memorial was held for Riahi ’s deceased father on September 11, 1999 in Oswego, Illinois. The body was not shipped. There was no funeral in Iran.

He remembers his classmate Matt stopping him in a stairwell at school and saying, “Your people did this. Better watch your ass.” When people would inquire about his ethnicity, Riahi would sometimes just say he was half Asian. “I avoided terms like Persian or Iranian or Middle Eastern; terms that expressed The Other. The bad people.” He got in a few fights with bullies. Fights he didn’t start.

“Most of the time I was punished,” says Riahi.

Riahi ’s mom asked him if he wanted to change his name to something more “white” but he refused. “It had only been a couple years since my father had and passed and I wanted to hold onto that,” he says.

Late into the night he shares his thoughts about being a young creative in Chicago:

“Many of us are driven to make art because of an automatic sense of defeat, born from our difficult upbringings, which cyclically creates more self-defeat. It’s like my roommate—he’s a painter, and a good one too, but because he’s unconfident as a result of his upbringing, his own sense of defeat, he’s not comfortable marketing himself. The lack of success in sales and reputation has a created more defeat for himself, which births less confidence. Not all of us face this issue, but it exists heavily in a culture where art is less frequently appreciated. We can’t make a living off our work—some of us can live with that, taking comfort in alternative careers. Some of us just dig ourselves deeper into our defeat until there’s nothing less of us to kill anymore.”

It’s now late into the night and Riahi’s roomates have all gone to bed.  He finishes off his wine and looks into the empty glass. Riahi’s considering becoming a copywriter for an advertising agency someday. Or a successful novelist. Maybe both? Only time will tell.