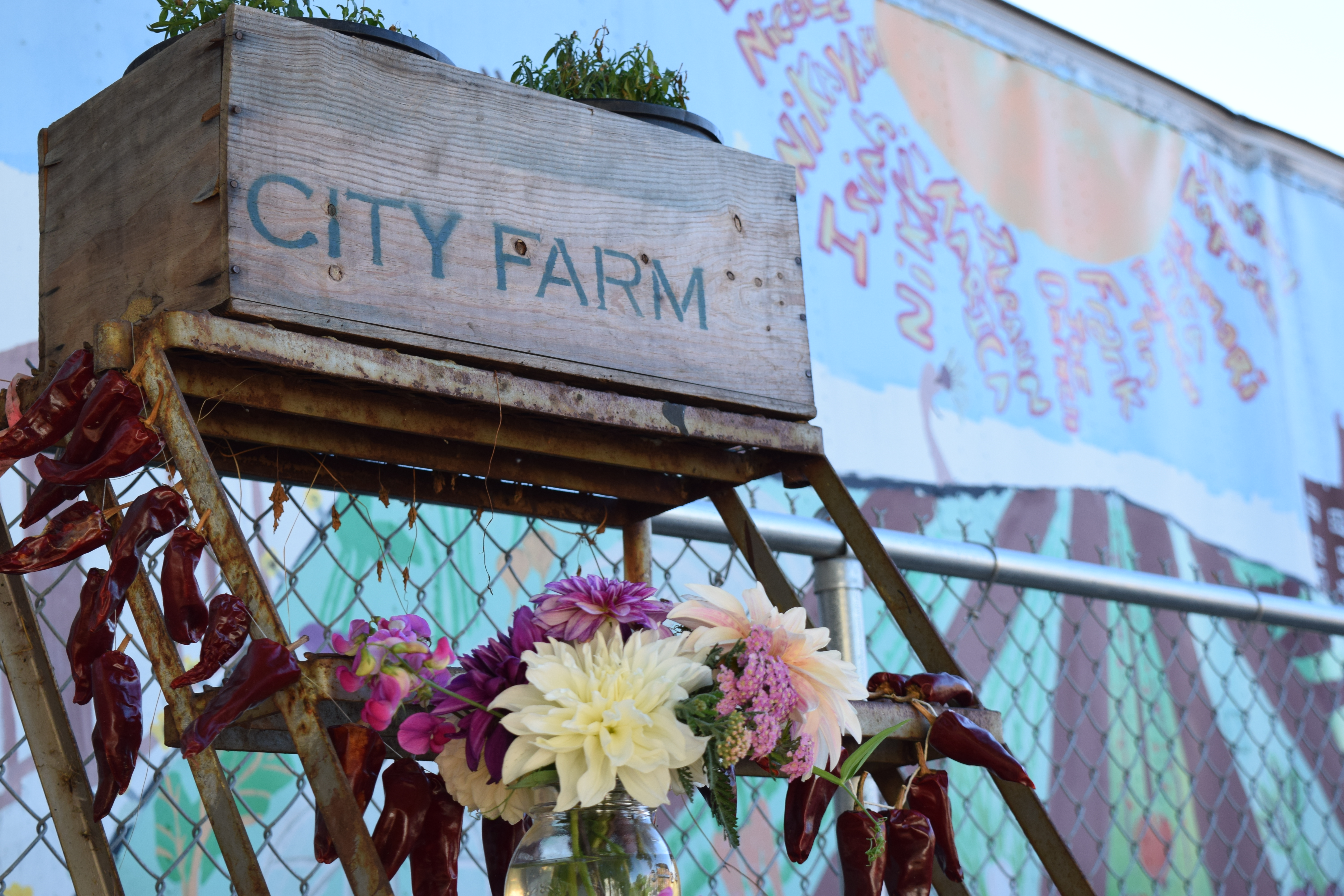 Worn denim meets dark soil. A few busy farmers tend to rows of thriving vegetables. Fattened heirloom tomatoes in rich, autumn shades hang next to bushels of bright bell peppers of every color and size, all ready for harvest. It feels like an idyllic version of any family-sized American farm. A real, natural cycle feels present, from the planting of every seed to the fruits of the farmers’ labor displayed proudly on worn wooden farm stand tables.

And then you look up. The John Hancock building suddenly rises in the east, the Sears Tower looms to the south, and firetrucks fly past high rises that frame the chain-linked enclosure in which this agricultural oasis exists.

City Farm currently sits at 550 W. Division St., in a space that used to be occupied by the Cabrini-Green public housing projects. This is its third location on Division St., but City Farm has occupied empty lots in different areas of Chicago since its inception by founder Kenn Dunn over 30 years ago. 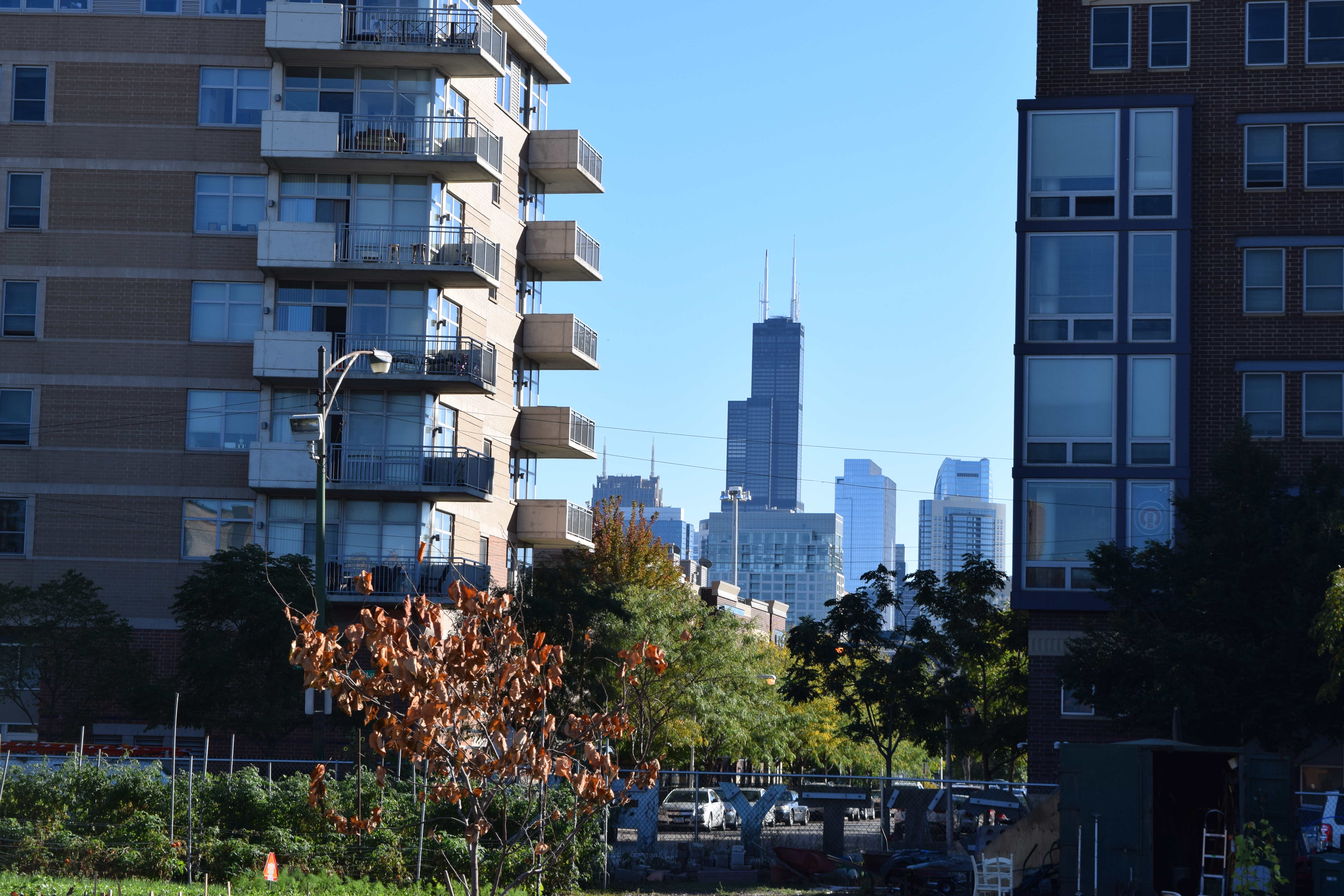 Dunn began City Farm in the 1970s as part of the Resource Center, Dunn’s nonprofit that runs several businesses focused on environmentalism and sustainability in communities across the city. The Resource Center doesn’t own any land, so City Farm is designed to be mobile. The center has moved from one vacant lot to the other with the purpose of providing not only access to fresh produce, but resources to create sustainability within communities.

“This is not about only food, this is about a new way of being in the world,” Dunn said. A soft smile takes form on his lips, his  blue eyes beaming with a certain passion and enthusiasm as he speaks. He sits relaxed yet attentive in a fold-out chair under the roof of the farm’s storage shed, surrounded by equipment,order forms and packets of seed to be stored. Sheltered from the shadows of the towering high rises, it could be a farm shed anywhere in America.

Dunn was raised in a small functioning Amish Mennonite town in Kansas, and began playing an active role in farming and community decision making.

“I was a part of discussions since I was 6 years old saying ‘yes, let’s borrow money and acquire land,’ which I don’t even know that our family knew that there are repercussions for that. Banks want their mortgage payments every month, every year,” Dunn said.

According to Dunn, Kansas experiences a drought every three to four years during the summer months. Thus, to continue to make payments, Dunn’s family farm installed a large-scale irrigation system, which he claims drained the water table 12 feet in just two years. “And that’s happening all over the world,” Dunn said. “With more irrigation, people have to keep digging deeper to find the water.”

This method, and as Dunn phrases it, “this way of surviving,” proved to be unsustainable. Dunn then took it upon himself to find solutions to the inequitable and unsustainable systems of survival that he recognized in both rural and urban areas in the modern world.

To do this, Dunn needed to attain a higher education, outside of what was available to him in his small Amish town.

“Our tradition wasn’t really to take advantage of significant education in the community,” Dunn said. “But I decided I would keep going to school until I got a solution of how to be an ethical person in a world that’s kind of out of balance.”

It was at the University of Chicago that Dunn began a project that would eventually grow into what is now the Resource Center.

“I immediately began experiencing what is now called nature deficit disorder. As an undergraduate I still went home every weekend and helped on the farm. So here at the University of Chicago, I felt the need to start digging in the ground,” Dunn said.

Dunn first began digging in vacant lots in Woodlawn, the neighborhood just south of University of Chicago. It’s in here that Dunn says to have discovered a “great disparity” between living conditions in Woodlawn and Hyde Park, and decided to make this area his “test case.”

And at the time, venturing this far south was almost certainly considered against the grain for what the University generally outlined as safe areas for students.

“Equality of all persons is one of the requirements of being an ethical and just society, and then there was this great disparity and there were walls and borders,” Dunn said. “I was astonished when the entrance orientation at the University of Chicago was someone saying ‘Okay guys, your borders are Cottage [Grove] at the west, 61st at the south, 47th at the north and the lake to the east. Do not cross those borders, we can’t protect you.’”

This idea of containing students within a block-by-block box came as a shock to Dunn.

“I immediately said, ‘I’m coming to the University of Chicago to learn about ethics and become a better person in the world and the first thing I’m being told is don’t see what the other looks like?’ And so with my instinct to also have contact with the soil, I went there almost immediately and started digging in the soil and thinking, ‘Oh my gosh, could this be a farm?’ And half of Woodlawn was vacant, so could there be a lot of jobs and a lot of food production there?’”

So in 1968, ground was broken and the beginnings of the Resource Center were starting to form. Dunn continued evaluating empty lots in Woodlawn, and eventually came across a lot next to a liquor store virtually covered in empty bottles. Staying true to the mission of using the overlooked value, Dunn hired a few men in the area to help pick up and organize the liquor bottles and sold them. He returned with $2.75 each for the participants, which amounts to roughly $20 a piece in 2017.

At the end of this first day of recycling, Dunn packed up and began to leave, summing up the venture in his mind as a sort of “proof of concept” as part of his Ph.D dissertation. He had proved that there is a way to recycle resources and live just and ethically, not initially realizing the impact of this day’s work.

As he began to leave, one of the men he had employed for the day asked:

“Hey man, where do we work tomorrow?”

And he was. Dunn returned with a truck, a scale and a map with a schedule of places to collect recyclables and when. The project began expanding city wide into 18 recycling projects, and fueled the evolution of the Resource Center and eventually, City Farm. 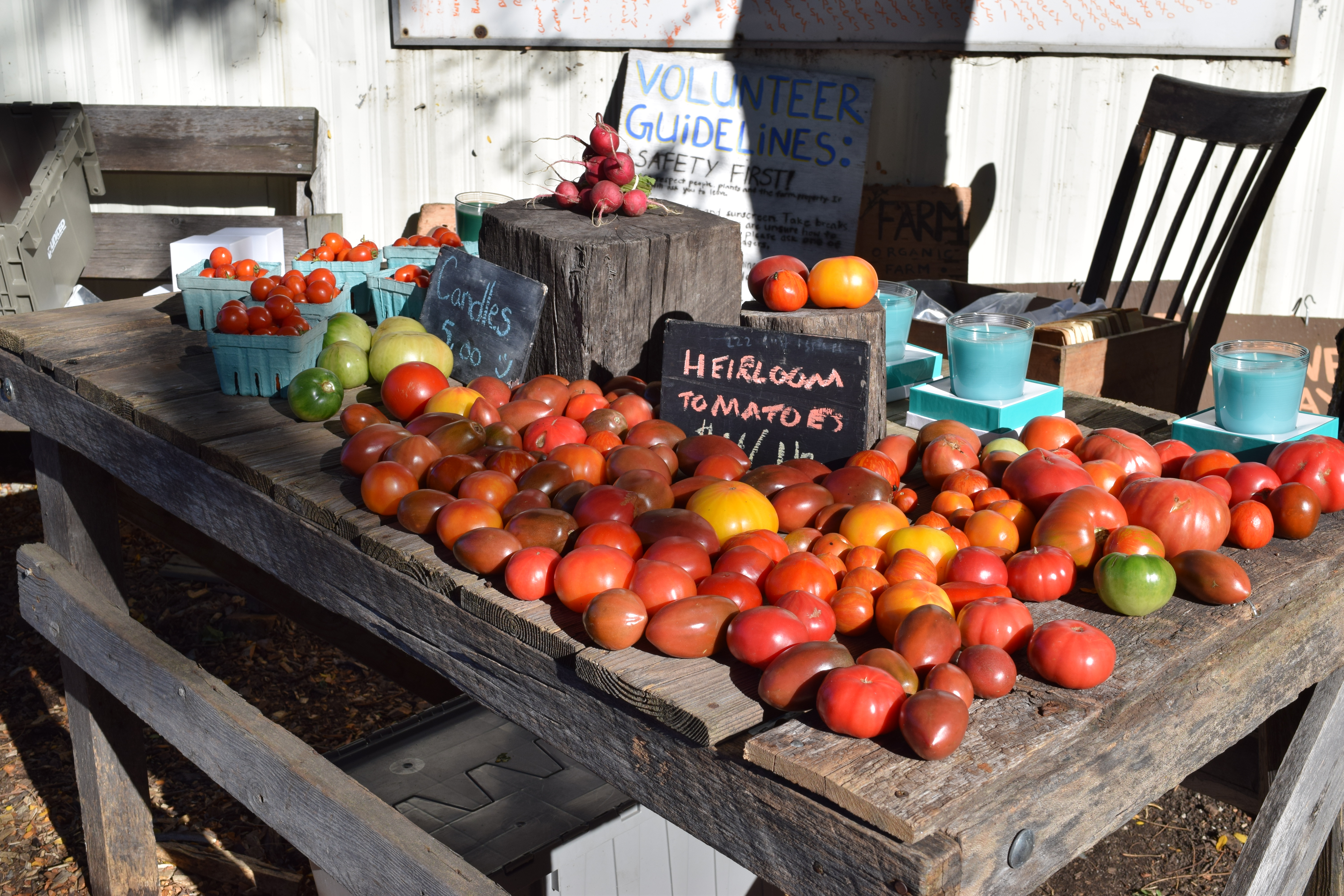 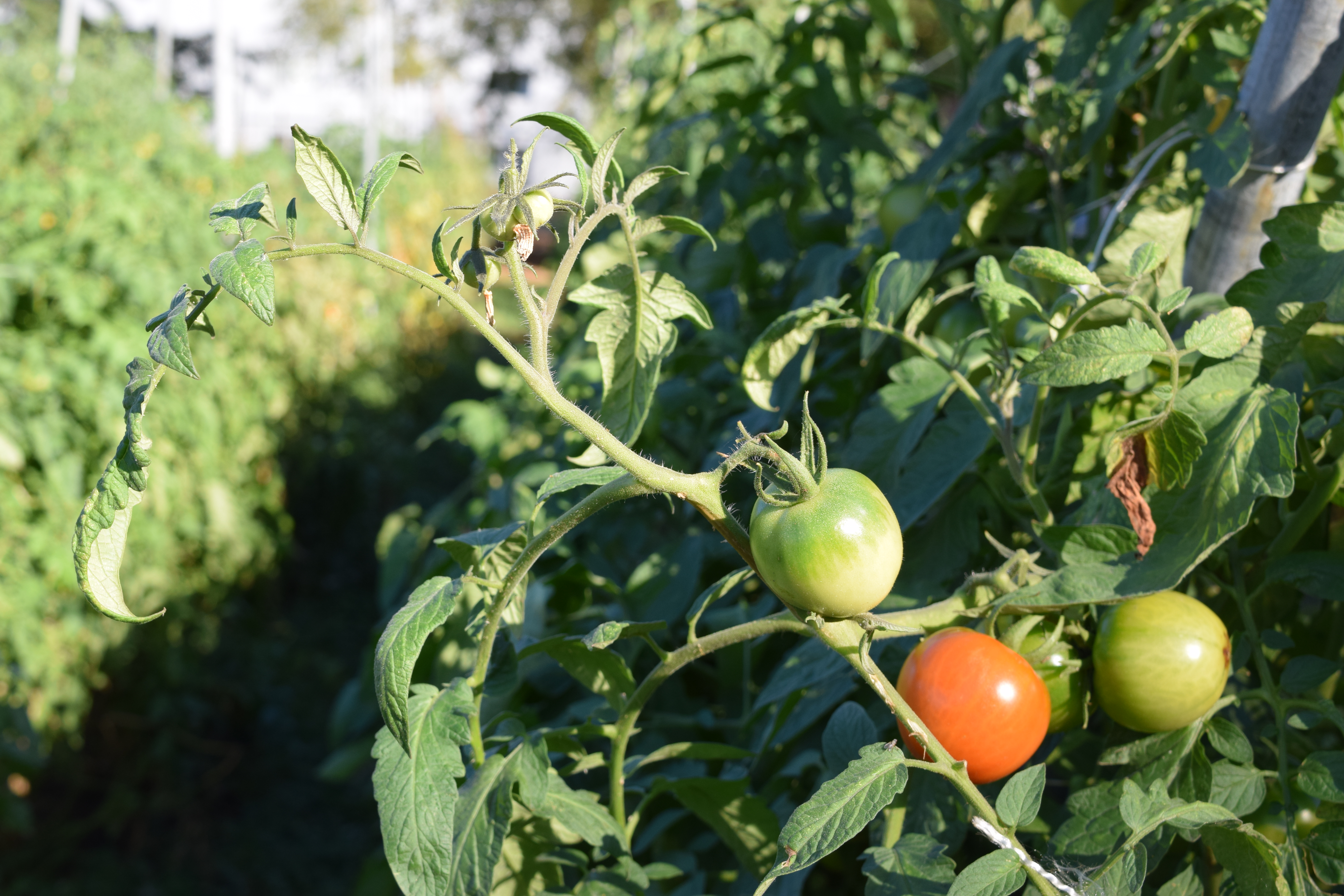 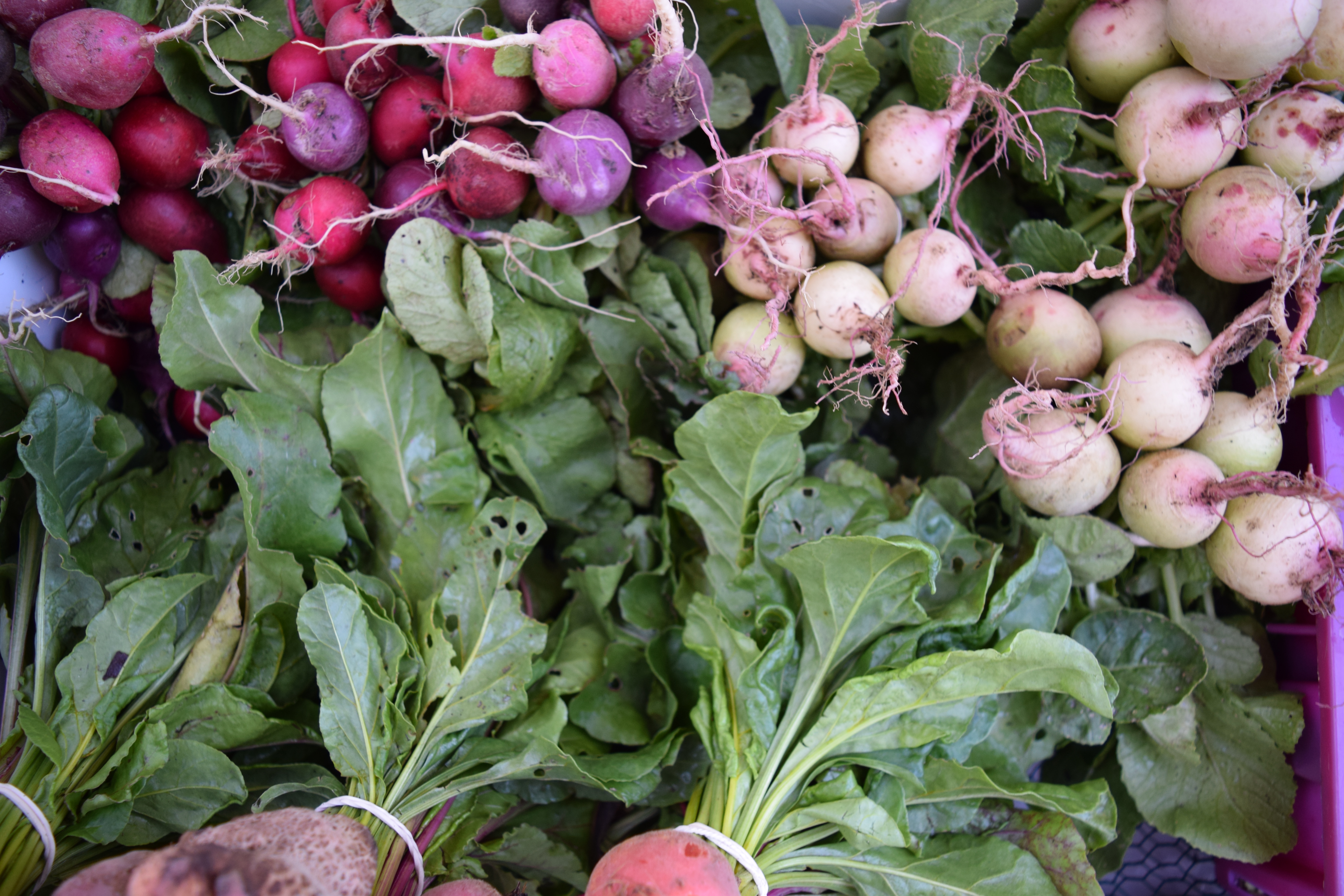 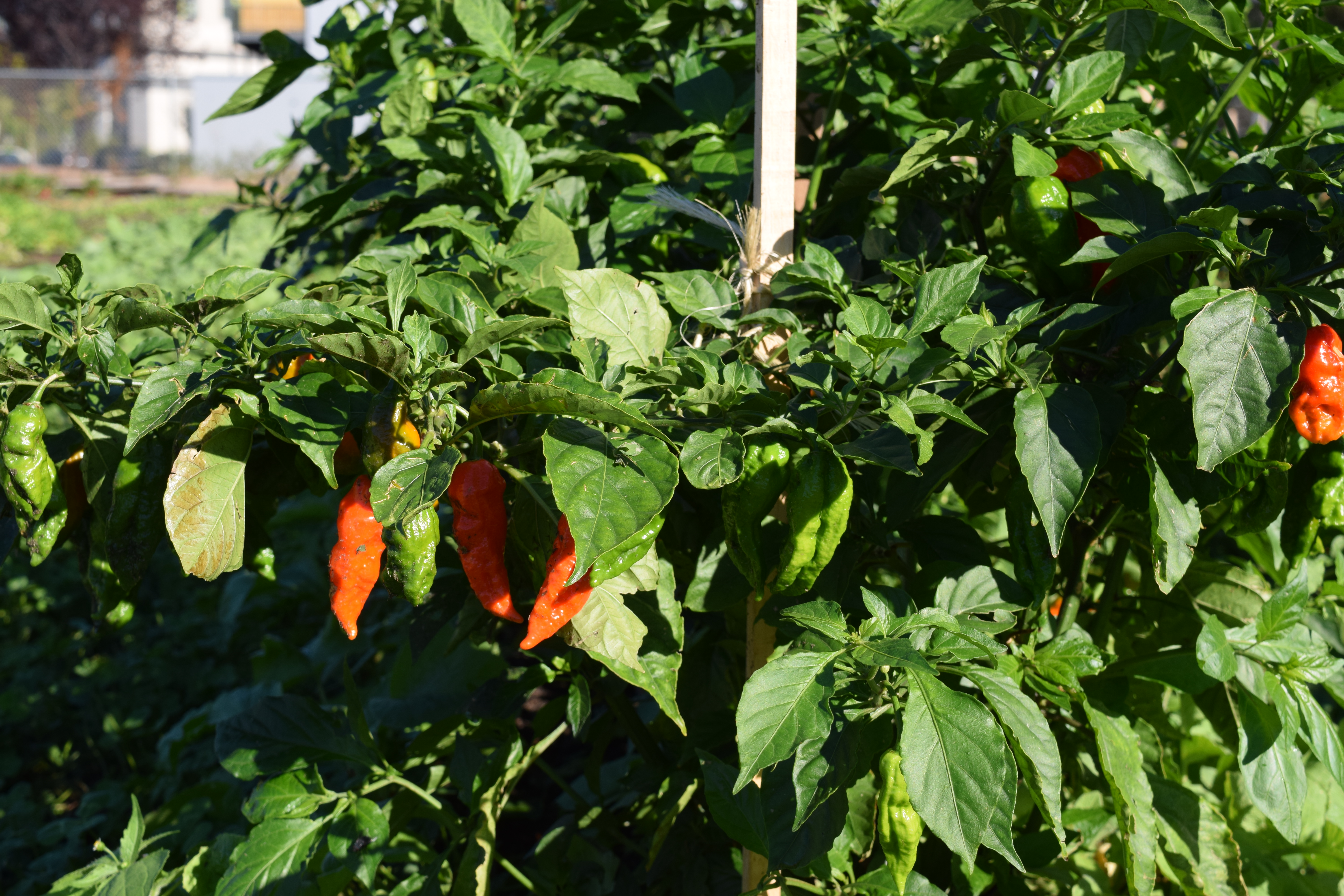 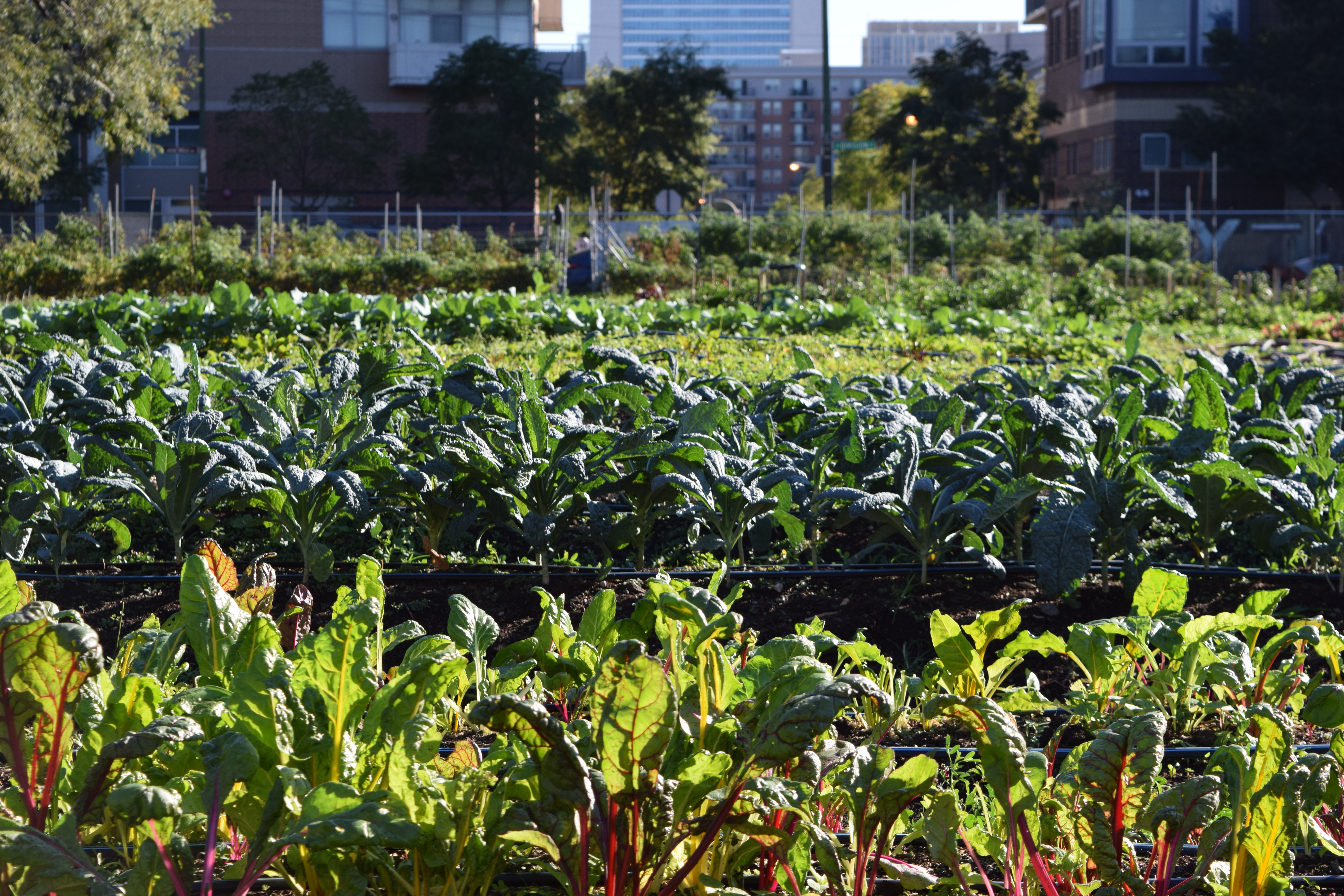 It’s Dunn’s belief that City Farm and similar urban agriculture and sustainability projects like the Resource Center have the potential to change the course of the way of life for residents across the city.

“The very specific problem Chicago is facing is violence, and this very immediately addresses the problem of violence,” Dunn said. “The violence and crime is mostly in communities that have 50 percent unemployment, 50 percent of the land is vacant, and if that land is turned into employment, and with our model, we can supply 5 jobs per acre. These jobs can pay $20,000-$30,000 a year, so it’s a family raising wage.”

And City Farm now serves as a sort of model for how to redevelop empty or abandoned lots in a way that is sustainable and ethical.

“Our mission has pretty much evolved to figure out something that’s gonna survive in the modern economy. Which isn’t easy. So what I thought it we need to get real experience to be able to overcome some barriers towards profitability so we pretty much evolved the model of urban agriculture that completes the cycle with restaurants and users with the food, such that the users of the food pay us to pick up the food waste, enough to turn it into compost,” Dunn said. “So the farm gets its nutrition free of charge from that adjacent business. With that it’s possible to instead of being meager and sparing with the use of compost we grow in two feet deep of compost which means the plants don’t struggle to find nutrition, and they invest a lot of nutrition in their fruits.”

The growth and success of City Farm is not just due to the viability of it’s structure, but also to the passion and shared goals of the people who make it work on a day to day basis.

Brecken Sahr, an employee at City Farm, does everything from pulling weeds to running the sales at the weekly farm stand. She initially joined the City Farm project for similar reasons as Dunn — an instinctive need to dig her fingers in the earth when she relocated to the city after a 30 year horseback riding career that allowed her to see the complexities, beauty and community involved in agriculture and nature. 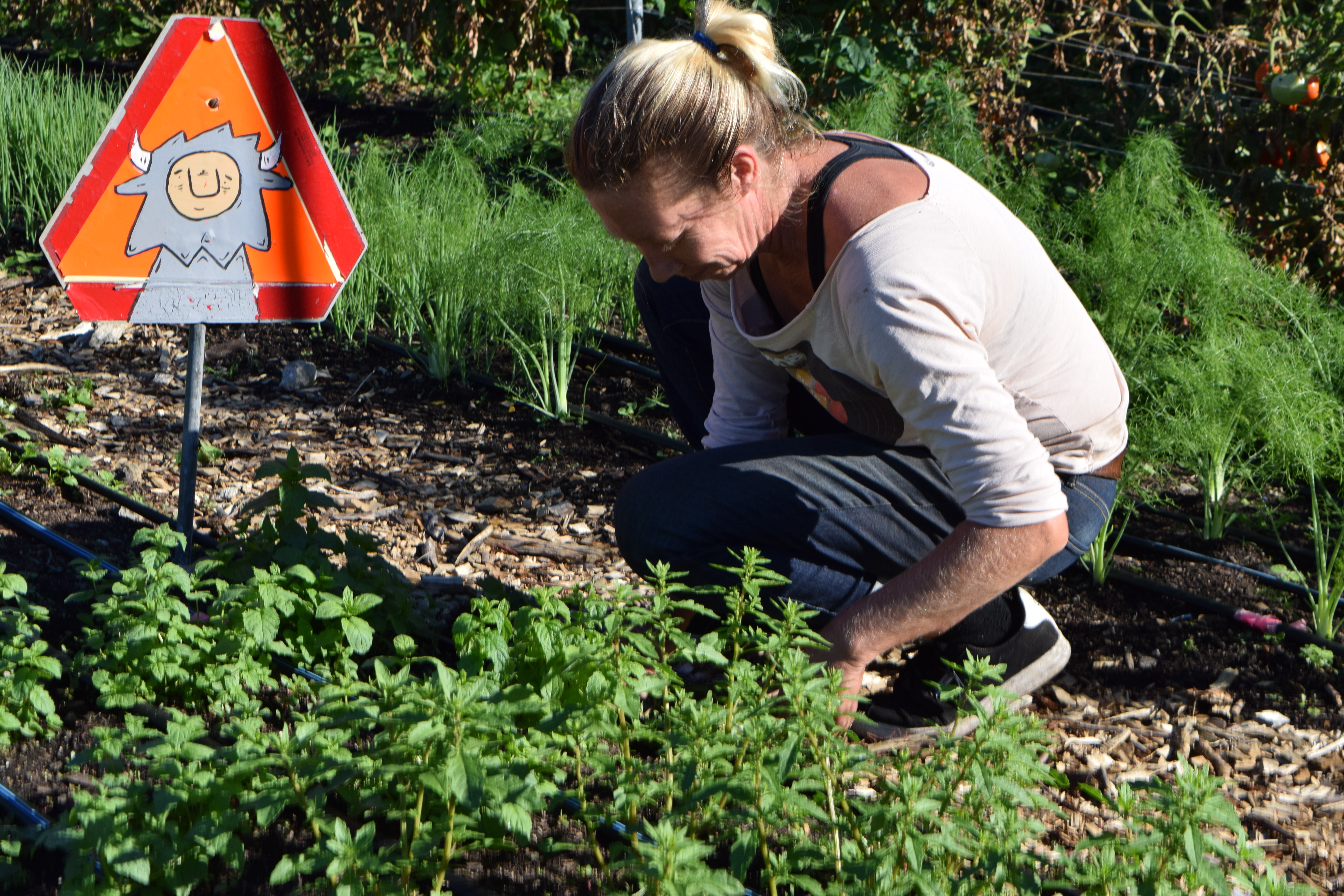 “I moved back to the city and worked a couple jobs that were very nice, but I was inside, and I started going crazy,” Sahr said. “So I thought I’d come to City Farm and learn about urban farming”

Sahr has only been at City Farm for a year, but already recognizes the strengths and weaknesses of the project and has plans to integrate it even more into the community.

“I think we have a lot of work to do to hit the entire community,” she said. “But I think we’re getting a lot of, I think, wealthier people — which is fabulous, because they’re still buying the produce, but I’d like to see if we can maybe accept the WIC card and some of those types of things and really going and advertising that.”

Going forward, all of the projects, ventures and ideas coming out of the Resource Center and City Farm seek to fulfill one main goal: an ethical, just and sustainable way of life that is attainable for all citizens of Chicago. And for Dunn and those like-minded, this doesn’t come from big donors or sweeping policy decisions.

“The normal tools of government to move in a just and ethical government have been rendered ineffective. Any institution that has survived capitalistic accumulation and supervision doesn’t have the teeth anymore to change society,” Dunn said. “I think it’s time for us to be done with institutions moving us towards a more equitable and just society. It falls back on the effort of individual citizens.”